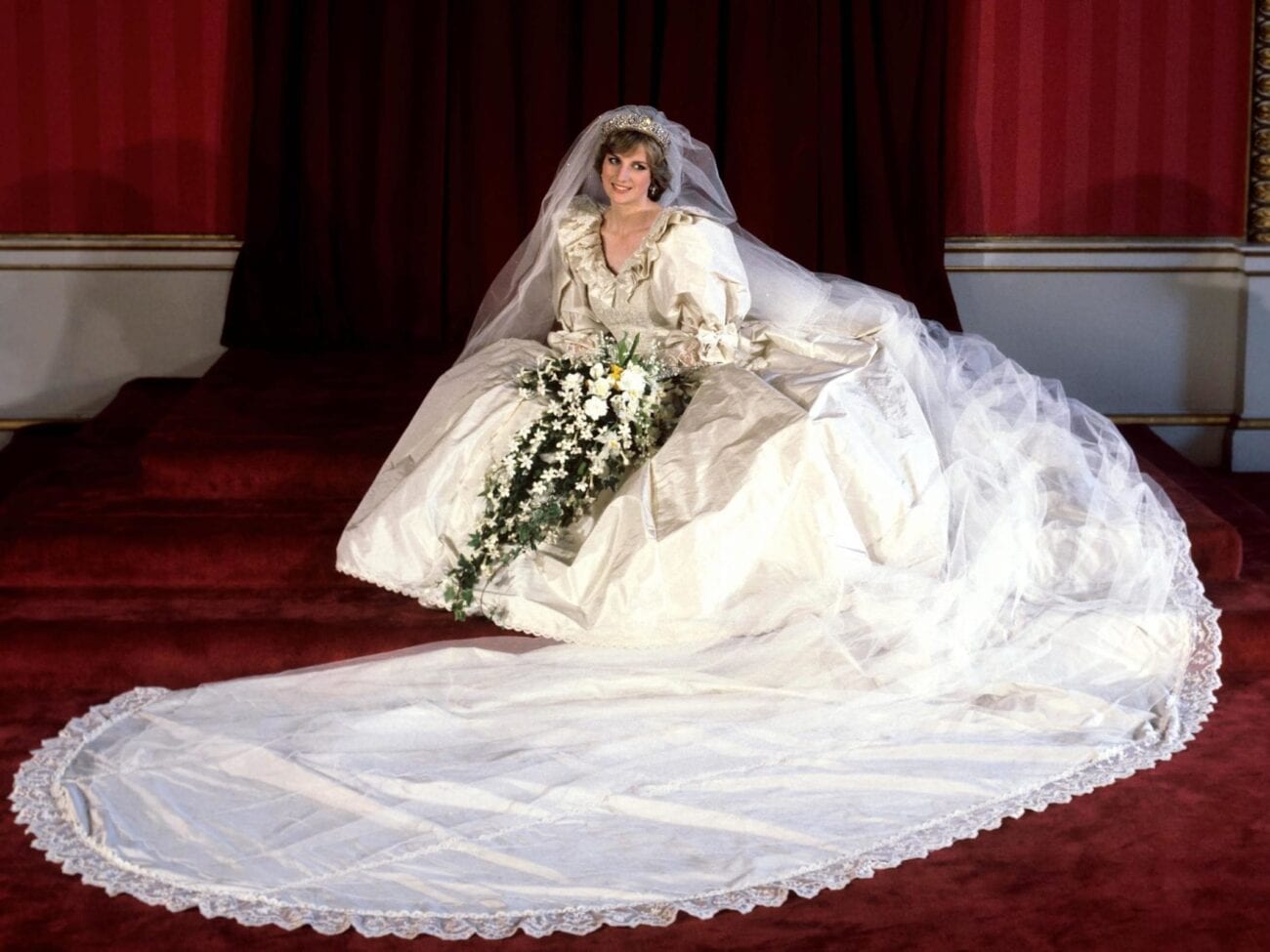 Royal weddings are always a spectacle of grandeur & tradition. The public affairs spare no expense when it comes to wowing every wide-eyed witness. Towering flower arrangements, beautiful cathedrals, parades through the streets – royal weddings aren’t a celebration to overlook.

But everyone knows that one aspect of a wedding is easily the biggest talk of the town. The bride’s wedding dress, of course! Long trains, poofy sleeves, elegant lace, sparkling tiaras – it’s just too much fun not to obsess over royal wedding fashion.

There’s a long history of royals causing a stir worldwide with their stunning attire. From Queen Victoria to Meghan Markle, brides have dazzled with their wondrous white gowns. Say “I do” to these gorgeous wedding dresses from the ages. 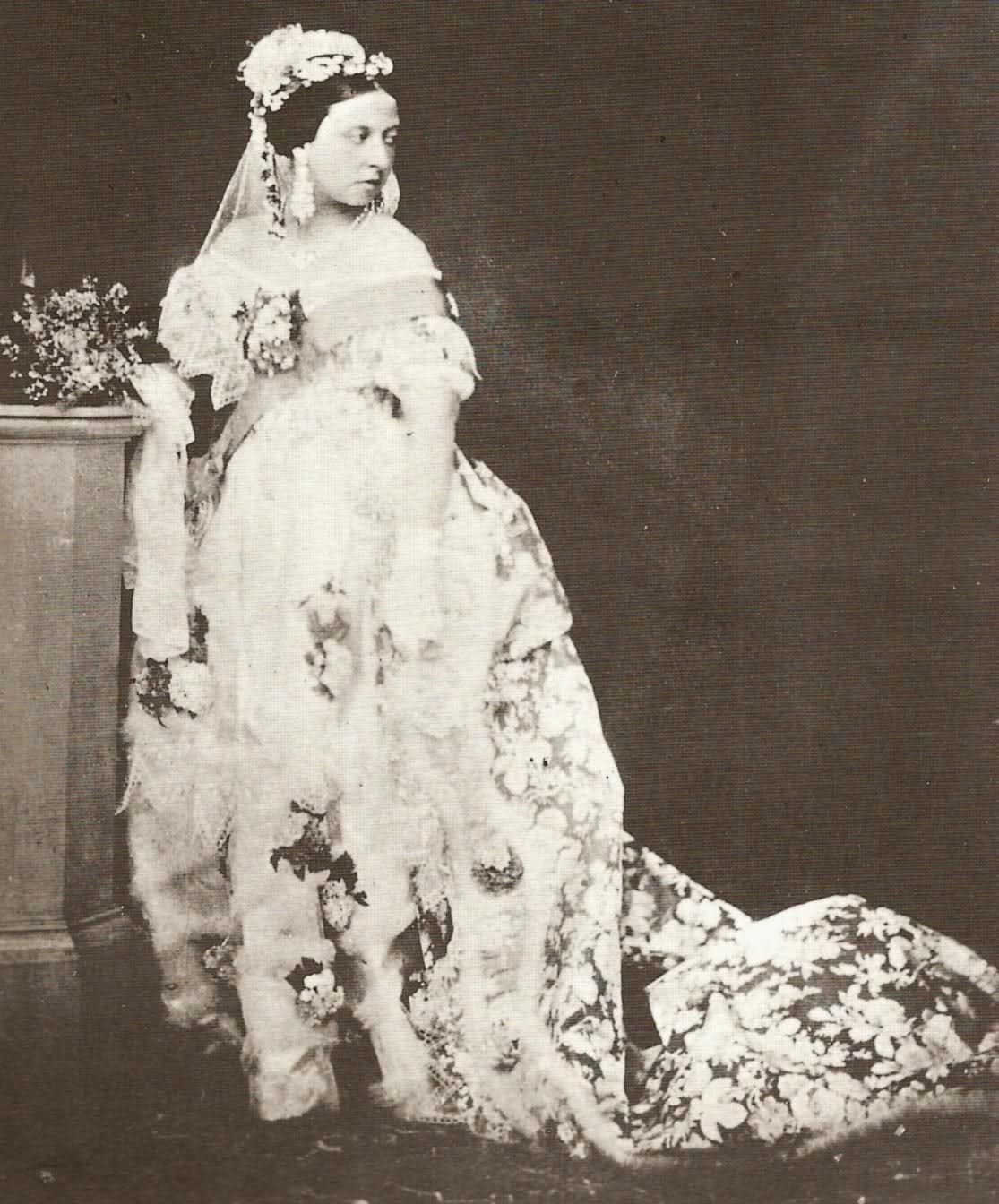 Have you ever wondered why wedding dresses are white? Back in 1840, trend-setting Queen Victoria of England chose to wear white on her wedding day because according to her it was the “perfect color to highlight the delicate lace.”

Before Queen Victoria’s dress, white wasn’t the standard for a wedding dress. In fact, white dresses were rather impractical because they didn’t stay white, meaning that white formal garments were a sign of wealth. Buying a new, white dress to be worn for one day in particular was the ultimate flex back in the day.

Queen Victoria’s lace-trimmed, off-the-shoulder dress garnered a great deal of press attention. With a satin train extending over six yards behind her as she walked down the aisle, Victoria’s ensemble certainly turned heads. The monarch was marrying Prince Albert for public relations and love, even proposing to her sweetheart herself. 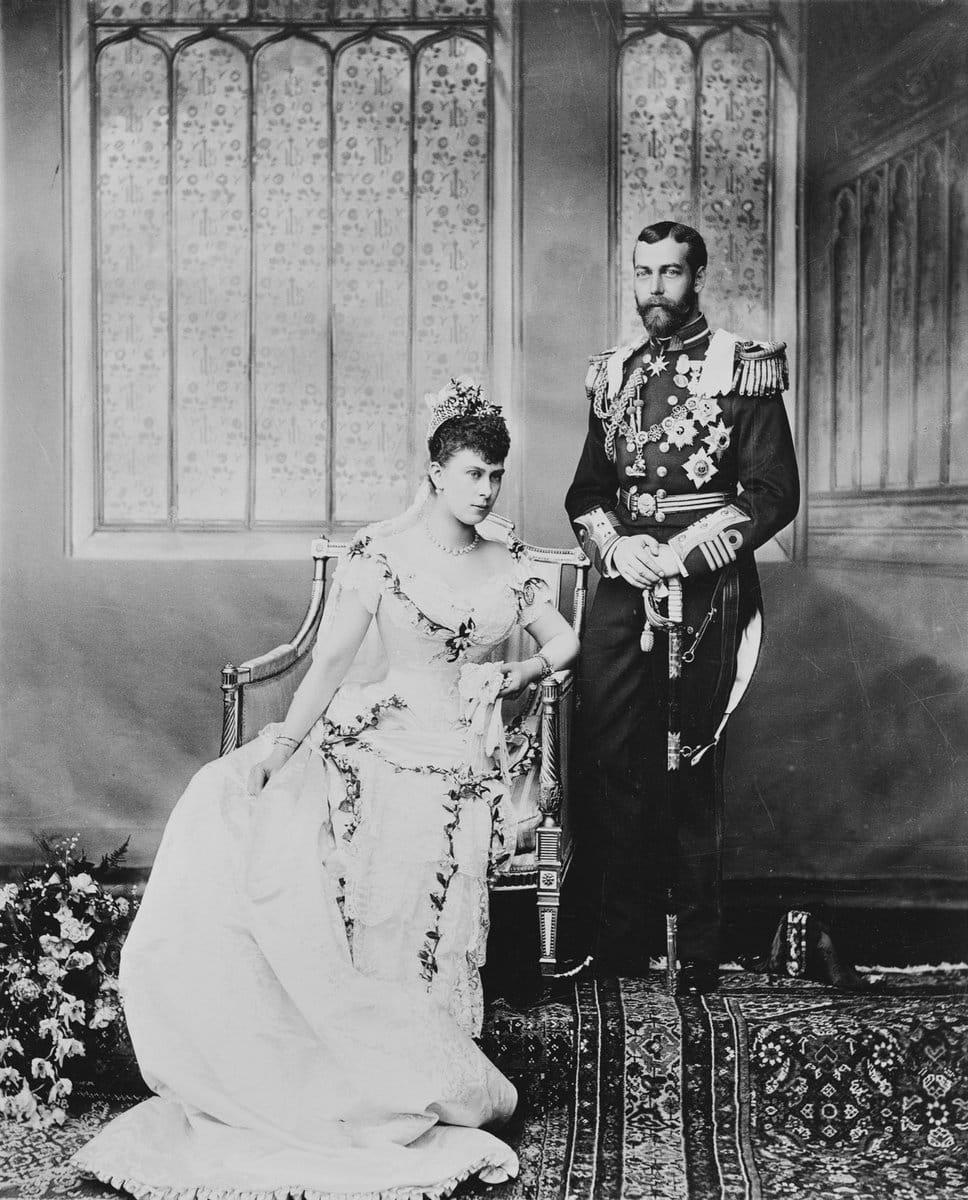 Queen Victoria’s grandson Prince (and later King) George, married Mary of Teck. Mary, affectionately called “May”, was originally betrothed to George’s older brother but upon his sudden death from influenza, she married George instead.

May’s white satin dress was embroidered with emblems of rose, shamrock, and thistle and was trimmed with orange blossom & ostrich feathers. She topped the look with a diamond tiara from Queen Victoria herself. 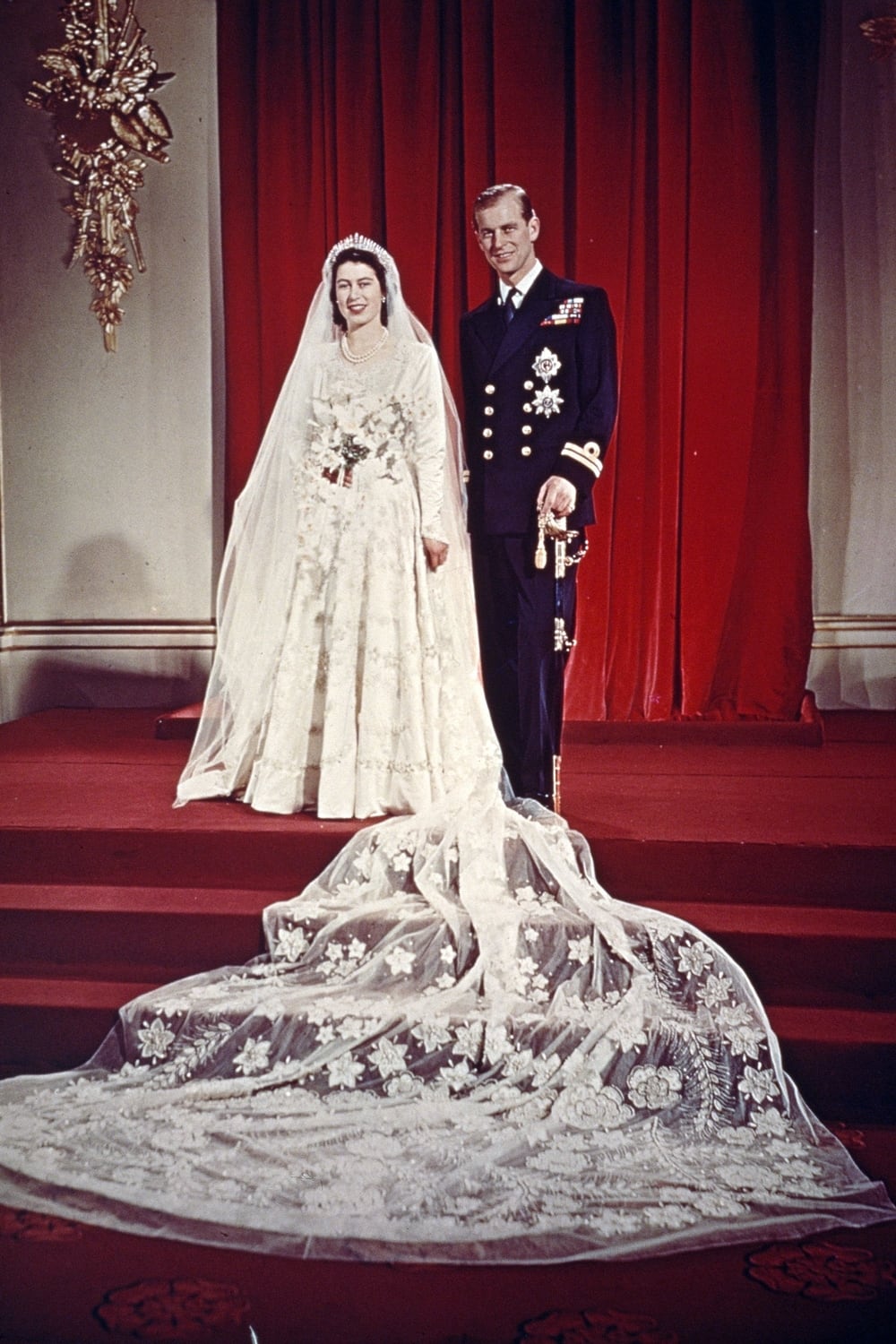 Word is that Elizabeth saved up clothing coupons to help pay for the dress since Britain was subject to rationing at the time of her marriage to Prince Phillip in 1947. 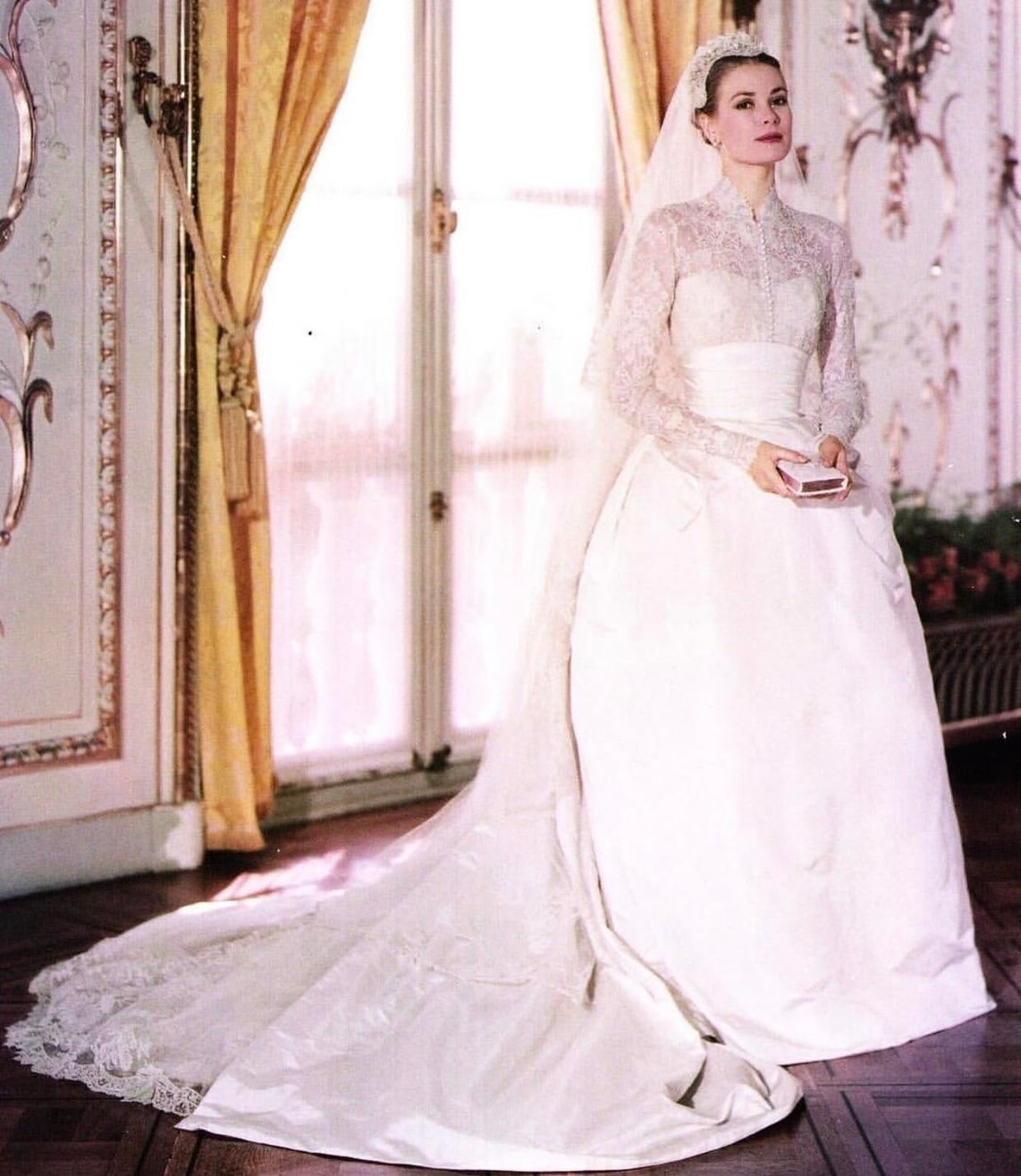 Hollywood star Grace Kelly captivated fashion enthusiasts as she walked down the aisle to marry Prince Rainier III of Monaco. Designed by Helen Rose of MGM, the gown transformed Grace into a Disney Princess instantly. Her fairy-tale wedding was memorable specifically because of her dreamy wedding dress.

The gown was conservative with a high-neck and long sleeves, but it teemed with beautiful ancient lace, taffeta, and thousands of hand-sewn pearls. Her long, billowy dress was fabulously complex, made of silk tulle, delicate lace, and peau de soie satin. 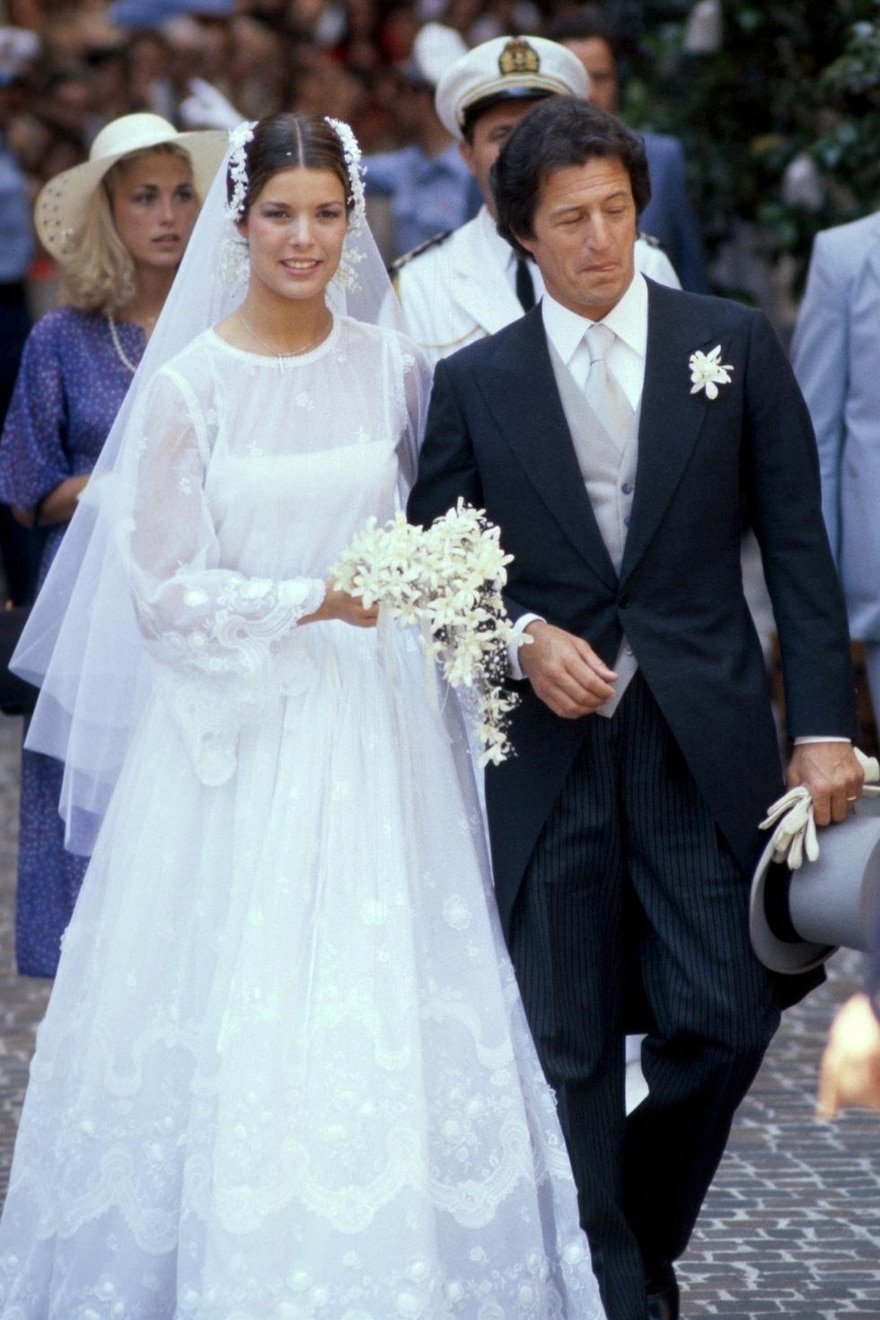 Grace Kelly’s daughter, Princess Caroline married financier Philippe Junot in 1978. Her bohemian gown was designed by Marc Bohan of Dior. The airy, simple frock was totally 1970s style. The young princess had whimsical flowers in her hair which donned the Princess Leia cinnamon bun look before it was even a thing! 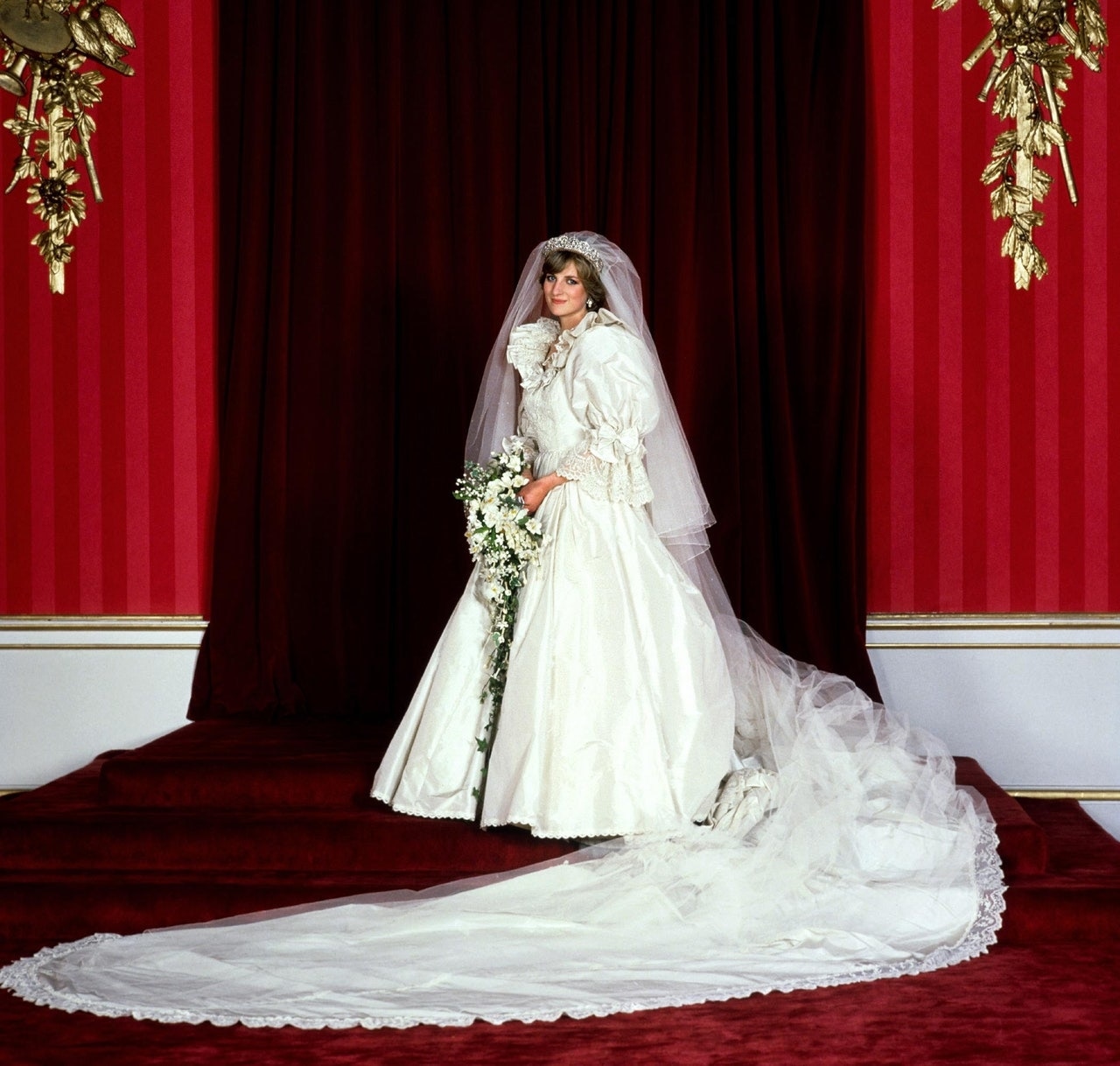 Who doesn’t remember Princess Diana’s breathtaking, poofy-sleeved wedding dress? The silk-and-taffeta masterpiece was decorated with mother-of-pearl sequins and had a twenty-five-foot train. The voluptuous dress had everyone in such a craze, they pretty much forgot that Prince Charles was there too.

Diana’s royal wedding dress inspired thousands of knockoffs sold everywhere and stayed a popular bridal design for over a decade – everyone wanted to be the ravishing Princess Diana. The iconic dress was even recreated for Netflix’s The Crown. 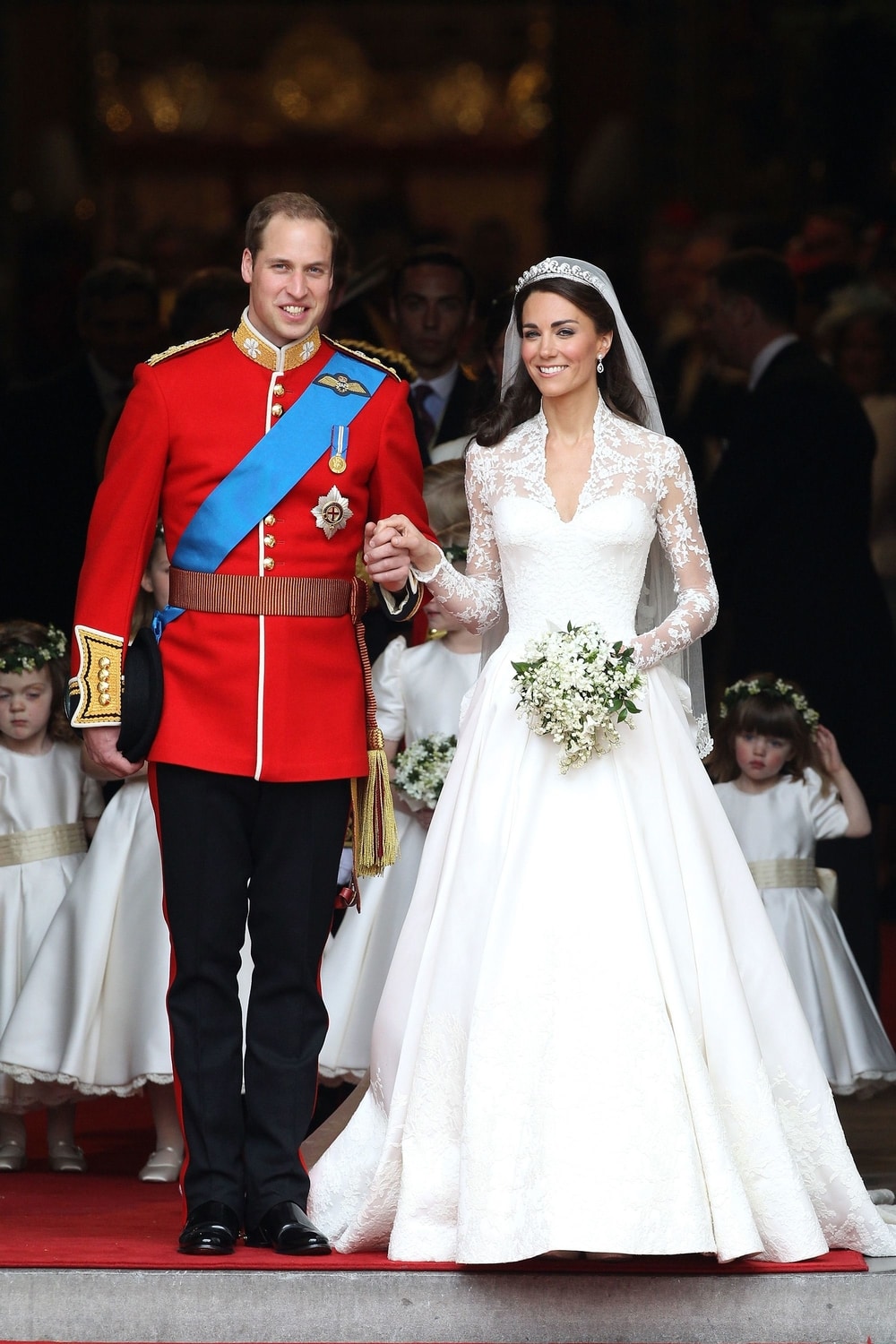 Kate Middleton, now the Duchess of Cambridge, became a beloved member of the royal family after her momentous wedding to Prince Williams. Designed by Sarah Burton for Alexander McQueen, her dress was an exquisite mixture of modernity & tradition.

With a delicate waist, long lace sleeves, floral motifs & a gorgeous flowing skirt & train, Kate’s dress was talked about for months after she walked down that aisle. Though Meghan Markle’s wedding was much more recent, Kate’s dress is still incredibly influential today. 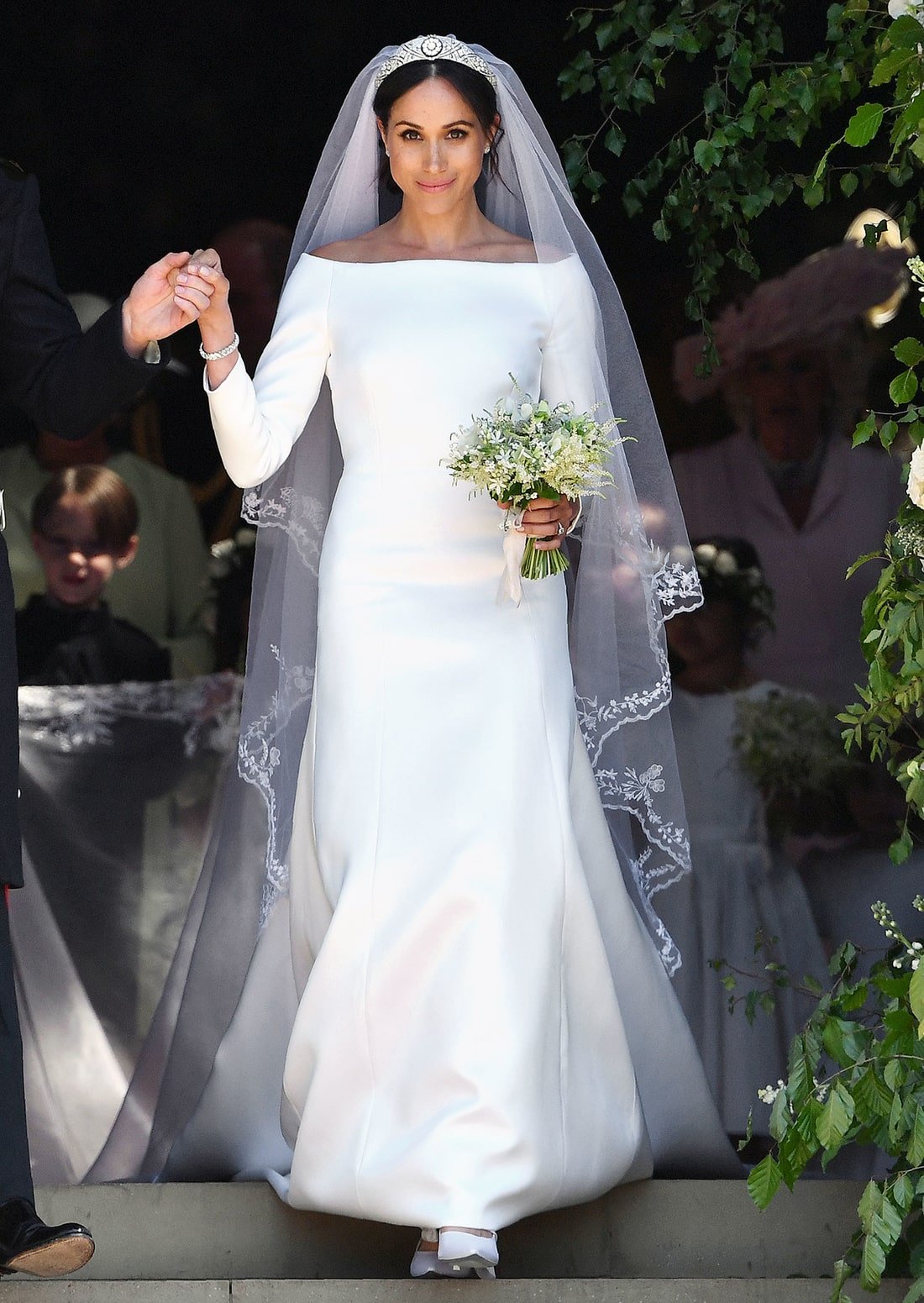 Of course, the most recent royal to join (and swiftly exit) the family was Meghan Markle. The Hollywood actress’s wedding to Prince Harry was certainly a sight to behold. Markle’s dress was custom-designed by British fashion artist Clare Waight Keller, director of fashion house Givenchy.

Markle expressed that she picked the dress for its “elegant aesthetic” and “relaxed demeanor.” Keller stated that the dress was meant to “convey modernity through sleek lines and sharp cuts”.