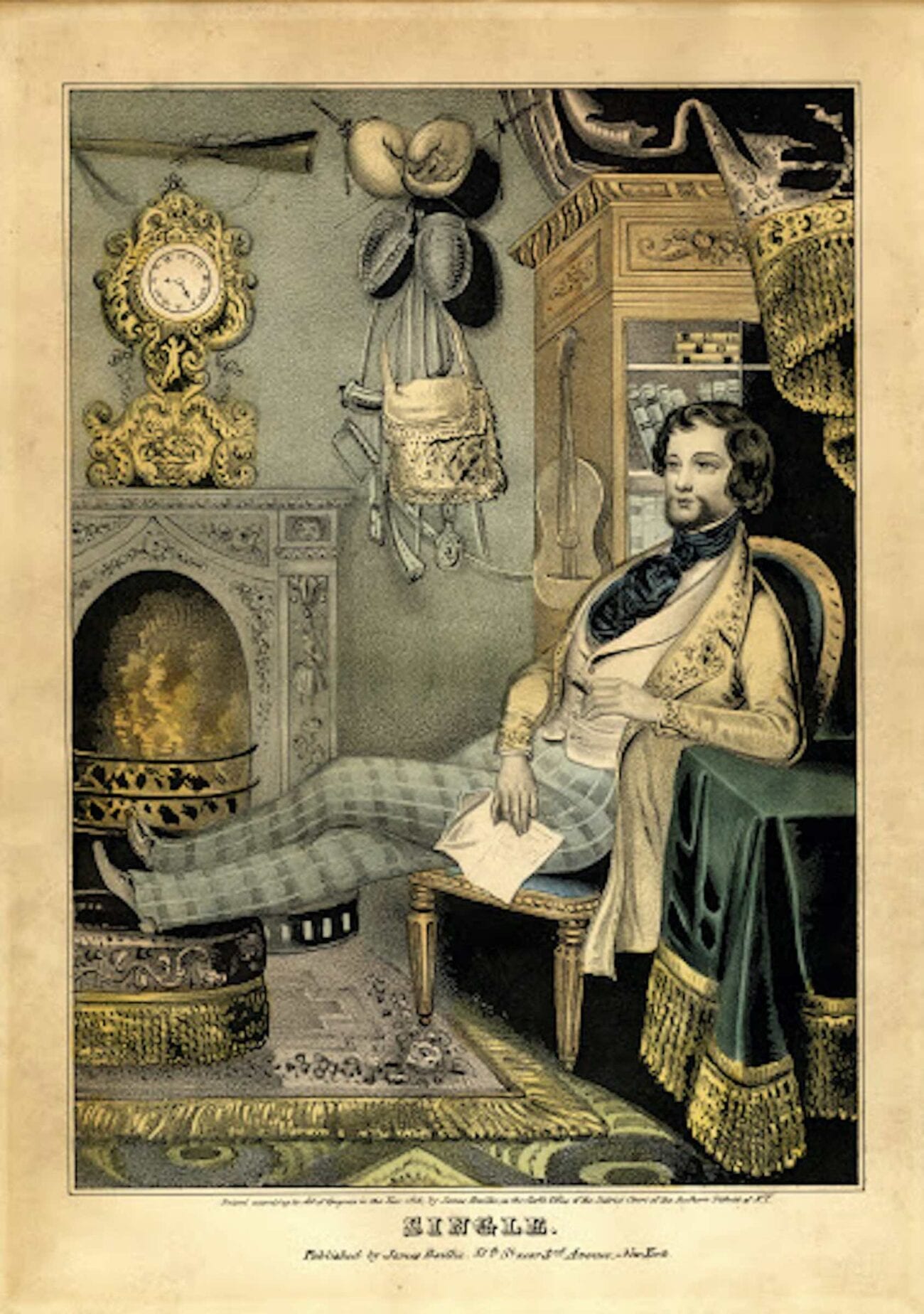 From the glamorous courtesans of the Moulin Rouge to destitute “fallen women” in the stories of Charles Dickens, most people imagine females when they think sex workers throughout history. In reality, there were plenty of male gigolos earning a good living from providing sex work to both women & men. 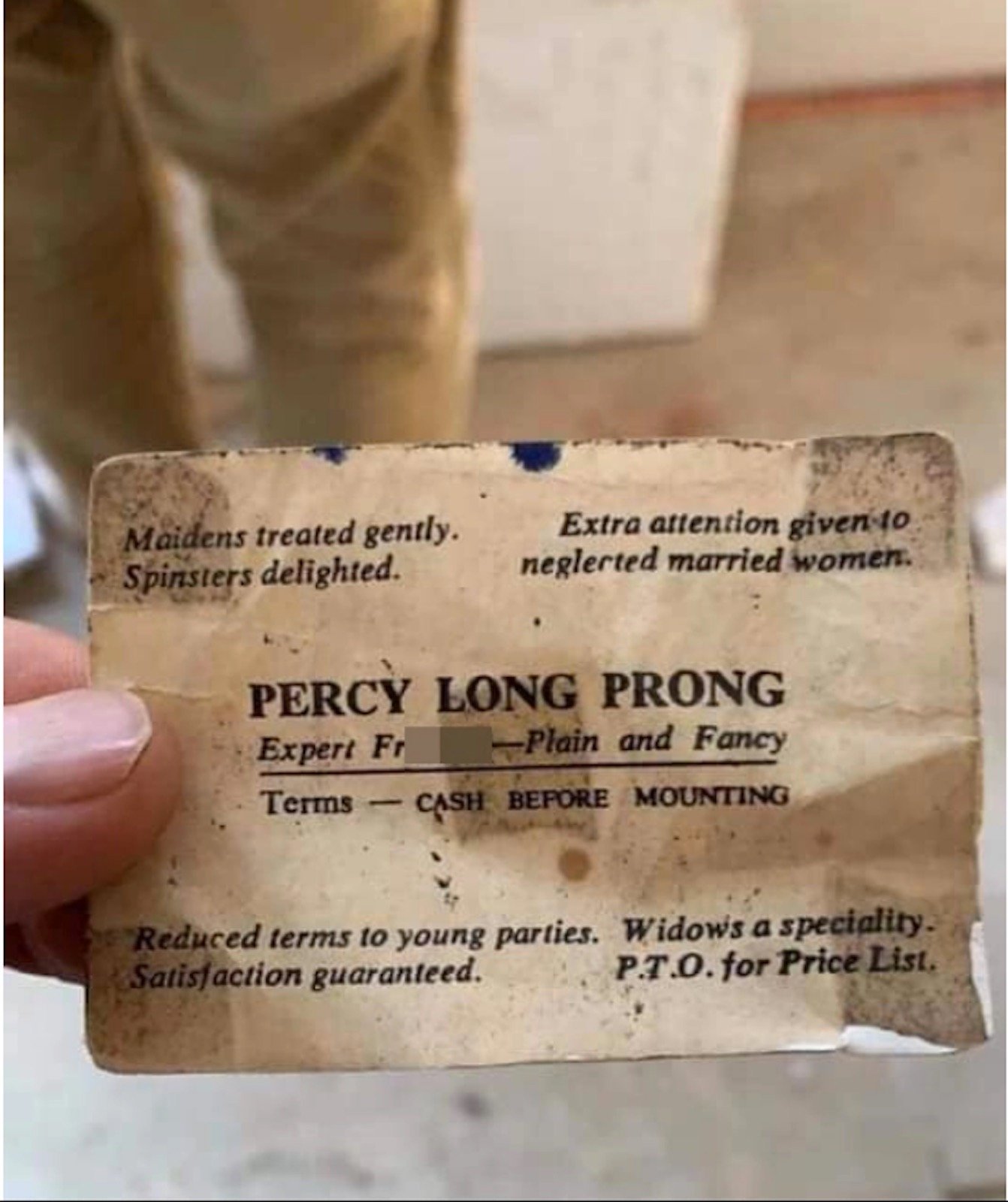 Apparently, one such working man had calling cards. An amused man in Britain found a racy business card under the floorboards of a house where he was working. The card advertised a sex work company called “Percy Long Prong”.  The card claims that Percy Long Prong has a “satisfaction guarantee”, and that widows are a “speciality”.

Widows aren’t the only ones in for a good time, however, as the card also says that “maidens are treated gently”, and “spinsters are delighted”. A photo of the sex work business card received 133,700 views on Imgur & Reddit since it was posted this week.

Percy also included a detailed price list on the back of sex work services offered, and it’s certainly an attention-grabber. For ten shillings (or twelve cents), one could get Percy for an hour. Fifteen shillings could’ve bought the whole night with two sessions “guaranteed”. The top section of the card with specific services is, sadly, partly rubbed off, but what does remain includes words such as “caress” and “positions”. 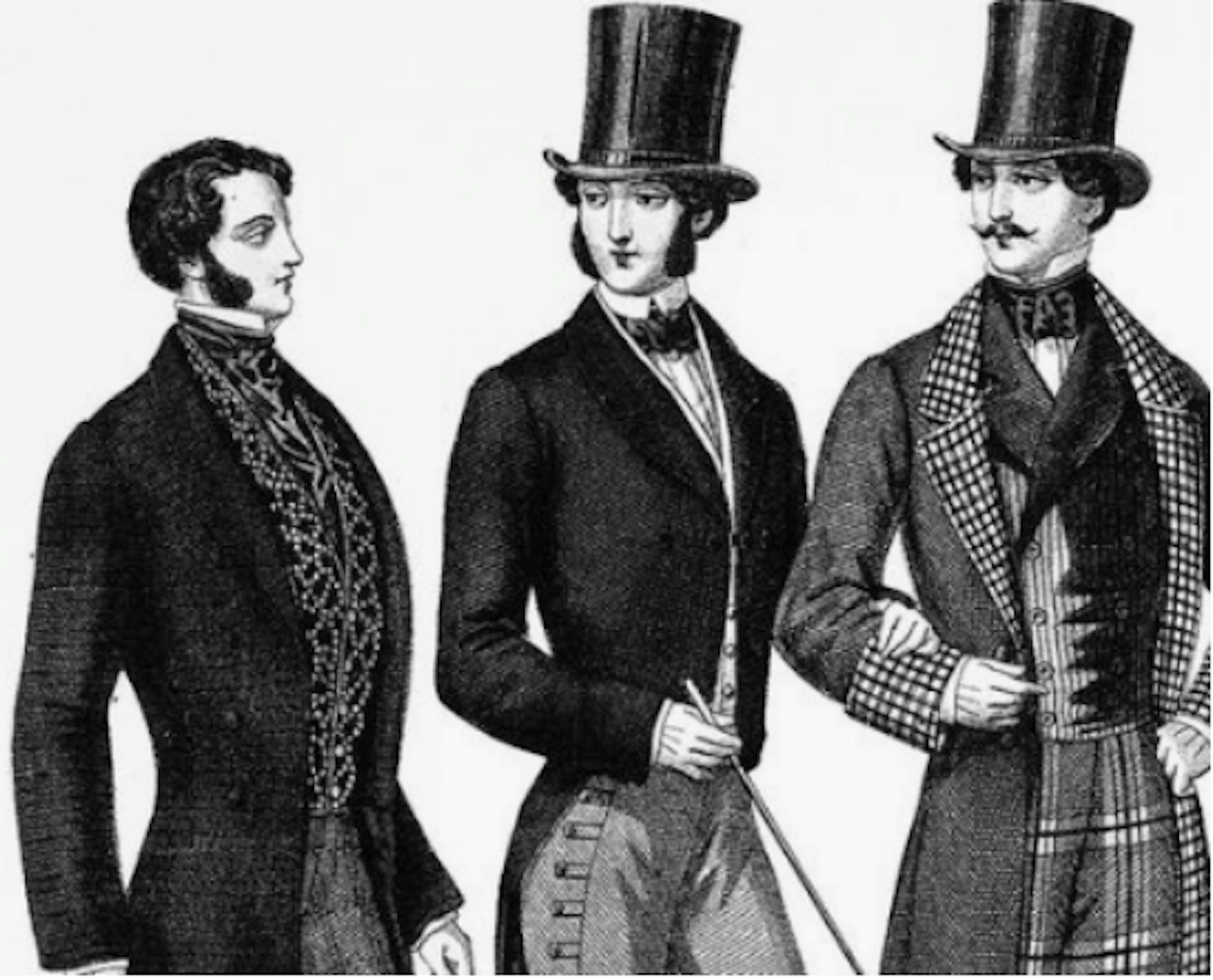 However, under the “extras” sections, you could have looked forward to a “bubble shake” and a “saliva exchange” to name a few. Whips & scourges – only “three strokes” given – are a premium product at fifteen shillings, and even Vaseline is listed as five pence “if needed”. Of course, for a premium service you’d expect to pay properly, and Percy asks for “cash before mounting”.

As a bonus Percy also “gives Green Shield Stamps”, which could allow customers to buy gifts from catalogues or affiliated retailers. While many were amused by the business card, others say it must be a prank. The name “Percy Prong Long” is a name shared by a spoof artist. It was used to enter a joke art contest called the “Turnip Prize”, a comedy rip off of the “Turner Prize”.

Although helpful Percy could be a prank, there were many bonafide gigolos selling their wares throughout history. One of these gentlemen of the evening was John Saul. 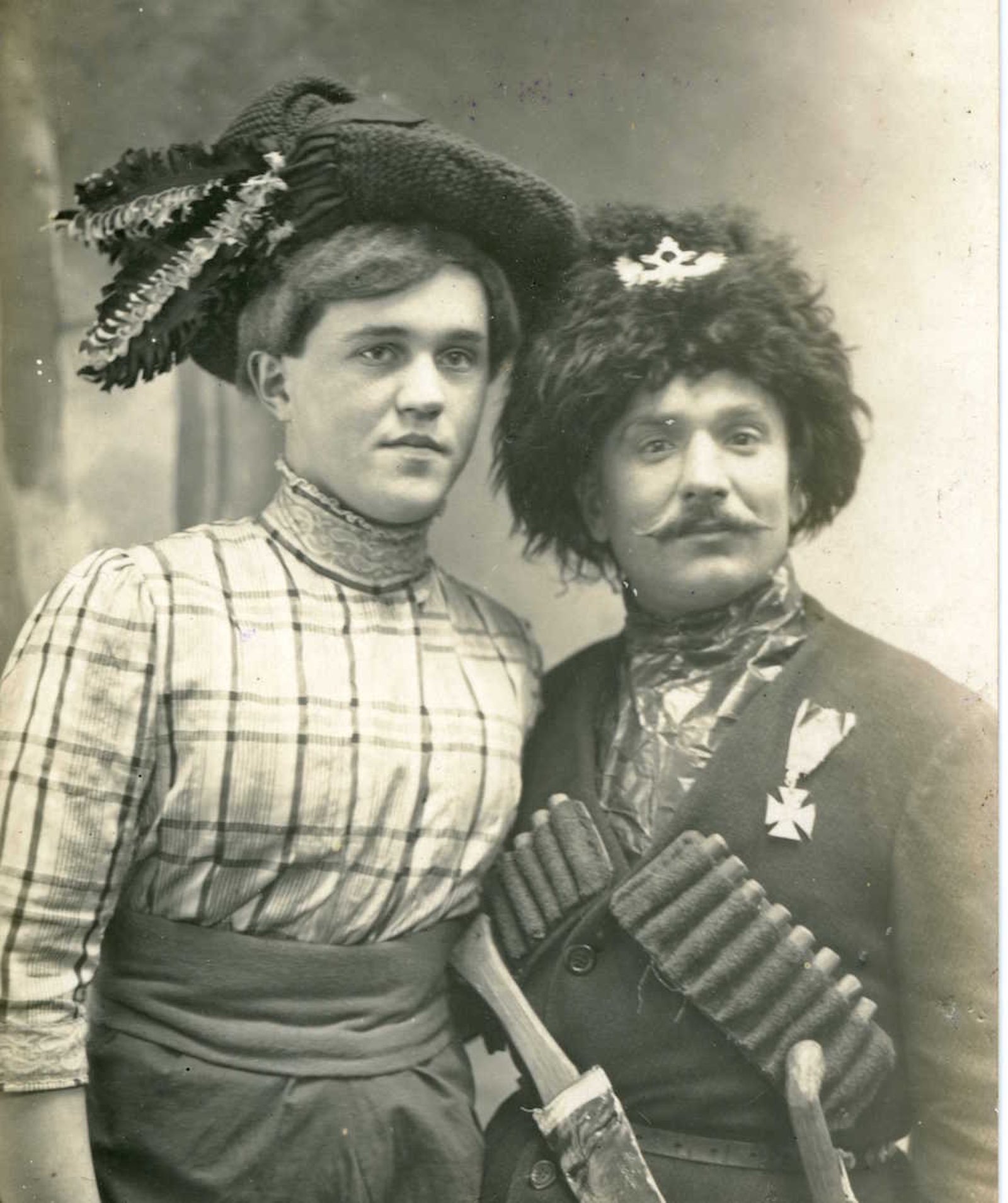 During the Victorian Era, people put out the appearance of being very prim and proper, but they didn’t mind experimenting behind closed doors. A man known as John Saul was born in Dublin, Ireland in the 1800s. He became a male prostitute to earn some money to get him out of his poor circumstances, and eventually moved to London so he could find some higher paying clients.

Gay sex was illegal at that time, but they decided not to prosecute Saul for sodomy, because it would set in motion a slew of prosecutions of every other man who participated in homosexual sex. It was rumored that Queen Victoria’s grandson was gay, and it was “bad timing” to go after gay men. 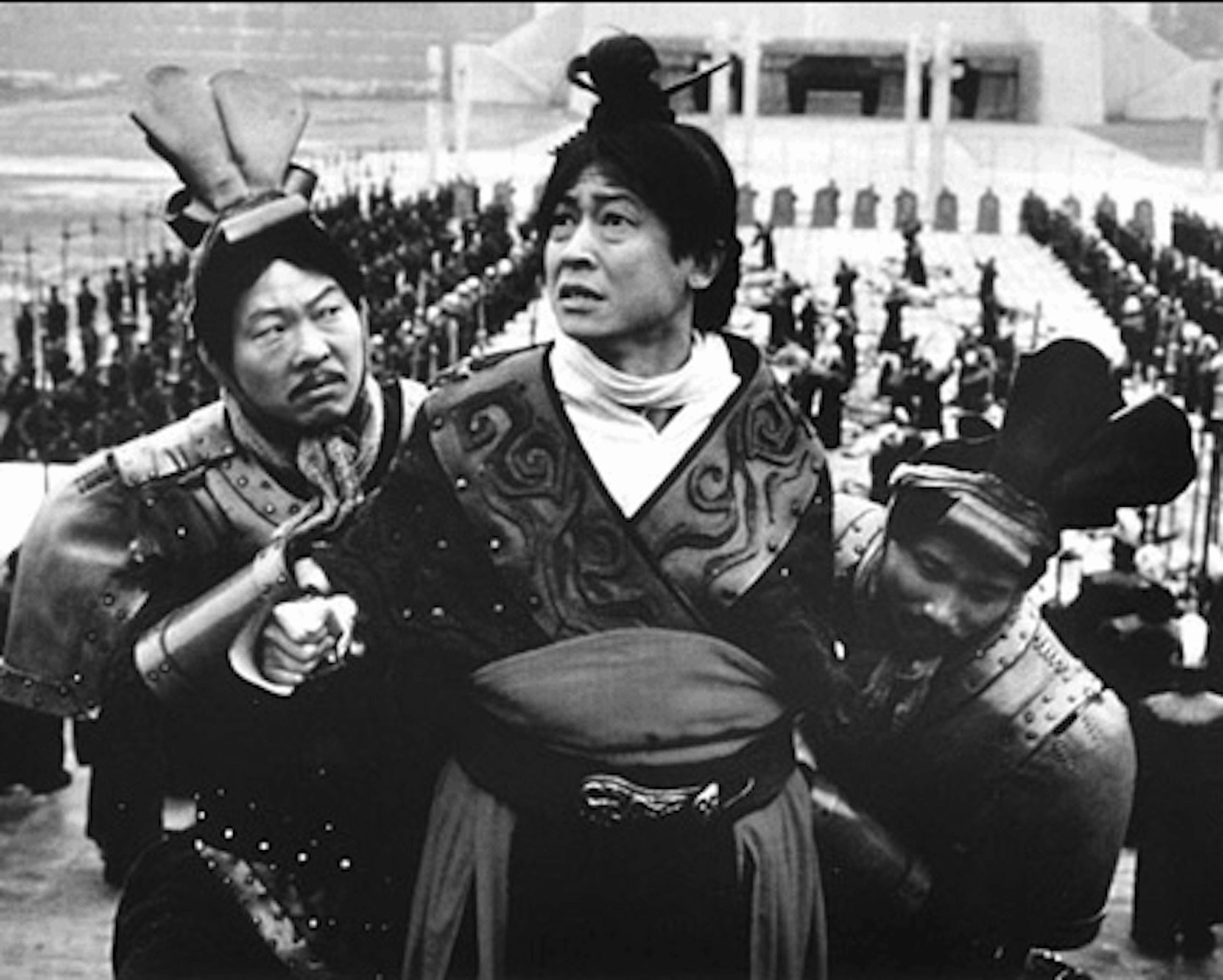 Another famous male sex worker was a man known as Lao Ai, who lived in China from 258 to 238 BC. The king was Ying Zheng, whose father had died leaving his mother a widow. As the Queen Mother, she openly enjoyed the company of lovers without shame. She had once been a concubine herself, before marrying the King.

Lao Ai was rumored to have a great body, so he performed a strip tease for the Queen. She was so attracted to him, he became her new lover. This sex worker had to dress in disguises in order to get into the castle. It would seem that they actually did form feelings for one another, because they had a long-term relationship, and even had two children together.

In 239 BC, Ying Zheng found out about this mother’s affair with Lao Ai. His two half-brothers were considered threats to the throne and Zheng’s army killed Lao Ai and his two offspring in an attack. Zheng then put his own mother in prison, but eventually let her go. In 221 BC, Ying Zheng unified China and became the first Emperor, Qin Shi Huang or “First Sovereign Emperor”. 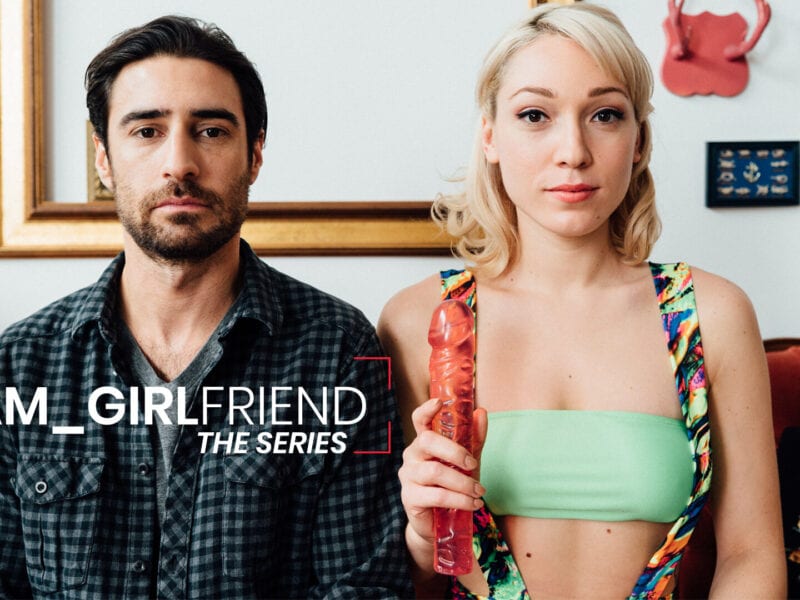 Is the cam site Chaturbate going to drop your new favorite web series?