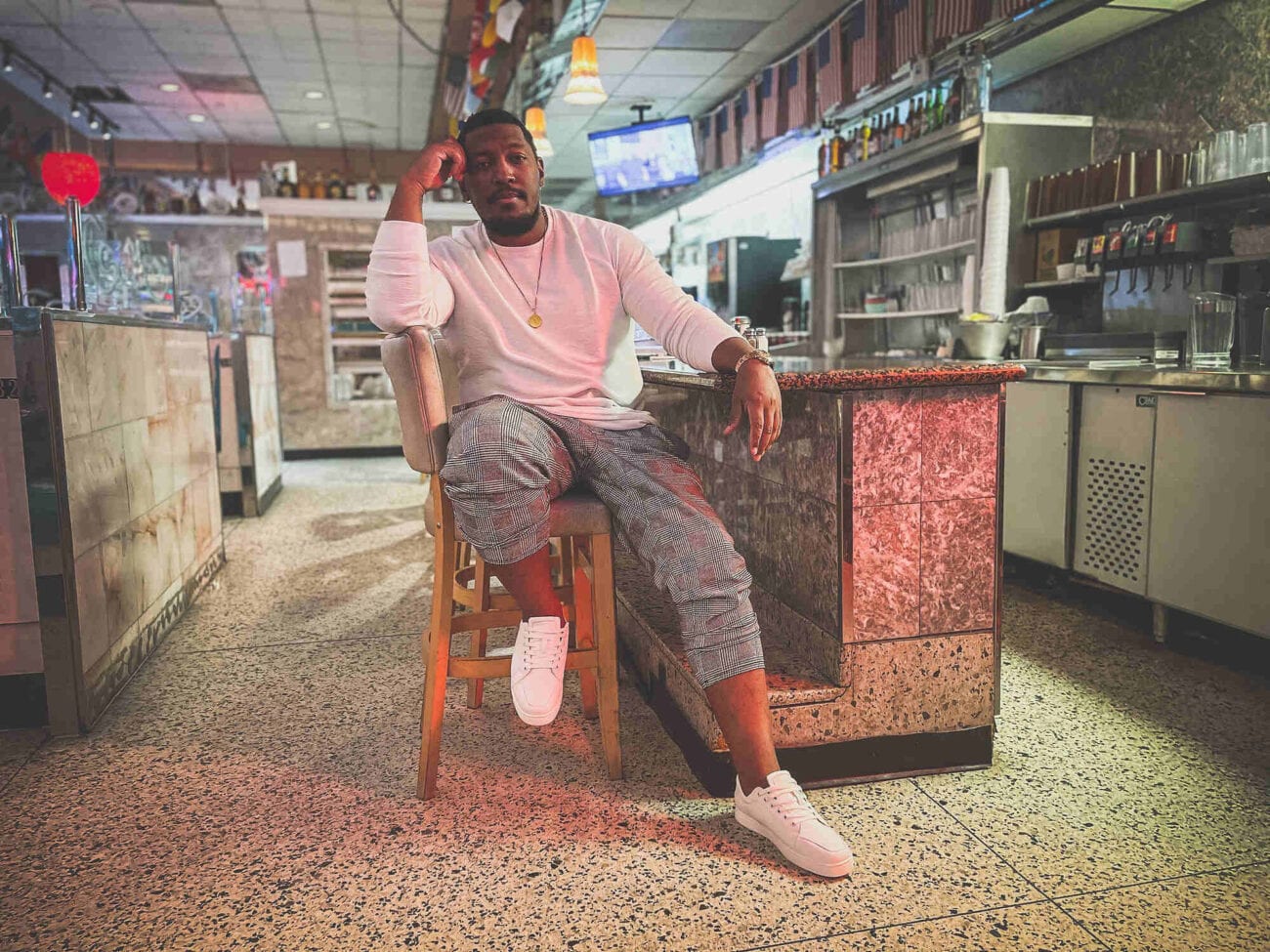 Ever heard of someone who is omnipotent? Because it looks like Justin Poage producer, actor, editor, writer, and cinematographer is quite the omnipotent director who doesn’t stop delivering extraordinary films.

You might recognize Justin Paoge from his striking films like The Six, Arbitration, and Zatanna. In fact, he’s also worked on award-winning films like the documentary Submit: The Virtual Reality of Cyberbullying and the 2018 film Life.

Today, the Savannah College of Art graduate Justin Poage is ready to tell us about his latest masterpiece What Divides Us, and why 2021 is the best year for the film’s phenomenal release. Here’s what he had to say. 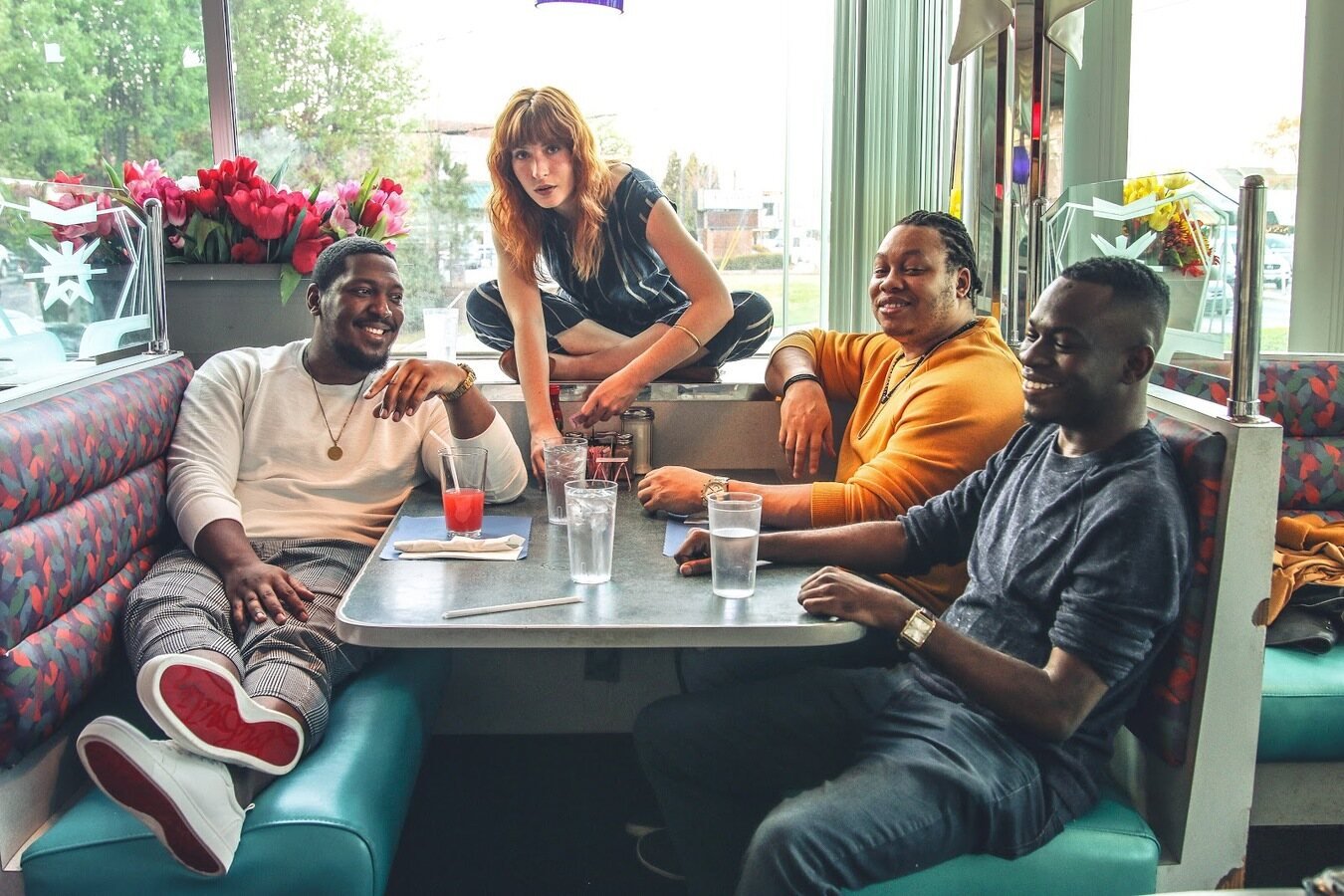 I’ve been a filmmaker ever since I was in the sixth grade, even if it was only in spirit. I was focused on it up until the point I was accepted to SCAD. SCAD taught me a lot. Not just about film, but about life as a whole. Regarding film, it taught me not just how to make movies but how to respect them as well. How to respect every job, every nuance of the process, and especially how to respect your audience. And in life, it taught me the meaning of struggle and the value of friendship & collaboration.

It was all about Steven Spielberg for me growing up. I was fascinated by the world’s he created in movies like ET, Jurassic Park, and Indiana Jones. I was too young to watch pioneers like Spike Lee so I wasn’t able to admire and appreciate him until I was older.

You graduated from the Savannah College of Art and Design in 2005. What was the most useful skill you learned during your time on campus?

One of the main benefits of attending SCAD is that they teach you how to do everything. So when I’m on a project, wearing multiple hats becomes second nature for me. I’m also a control freak when it comes to my work so I always tend to end up wearing multiple hats without realizing that I’m doing it. I’ve been learning to let go of that though. 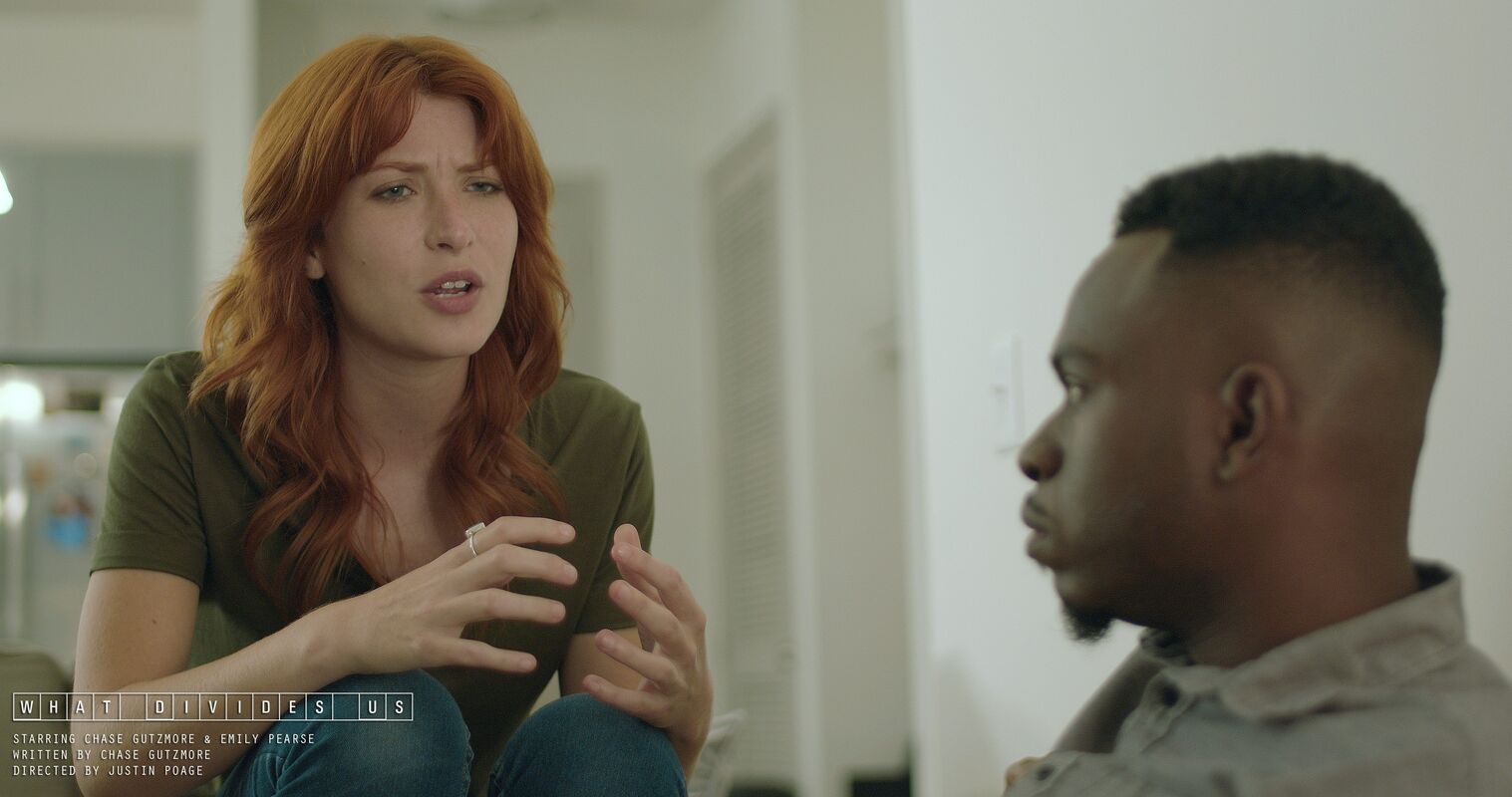 My mentors ended up being my professors at SCAD. They essentially molded me into the filmmaker I am today and helped shape my voice. Not in the types of stories I tell but giving me the confidence to be fearless in telling them. So with that being said I would definitely recommend having a mentor. Finding one isn’t as easy as it may seem though. I was lucky, but others who can’t physically find one need to know it’s okay to let the internet be your mentor. Nowadays I can learn everything I learned in college online in YouTube videos. The information is out there and it’s so helpful when you’re trying to find you footing in who you want to become.

You made your debut film Express TakeOut in 2009. How has your directing style changed since the film’s release?

Oh it’s changed tremendously in the fact that I actually know what I’m doing now. Back then it was all reckless running and gunning which is fun in your 20s because you get to test out everything and learn what works and what doesn’t. But as I grew and my experiences grew with me so I’ve learned the value of taking your time to make sure something is right. Studying your actors and knowing what makes them tick so you can assist in bringing out the best for your project. 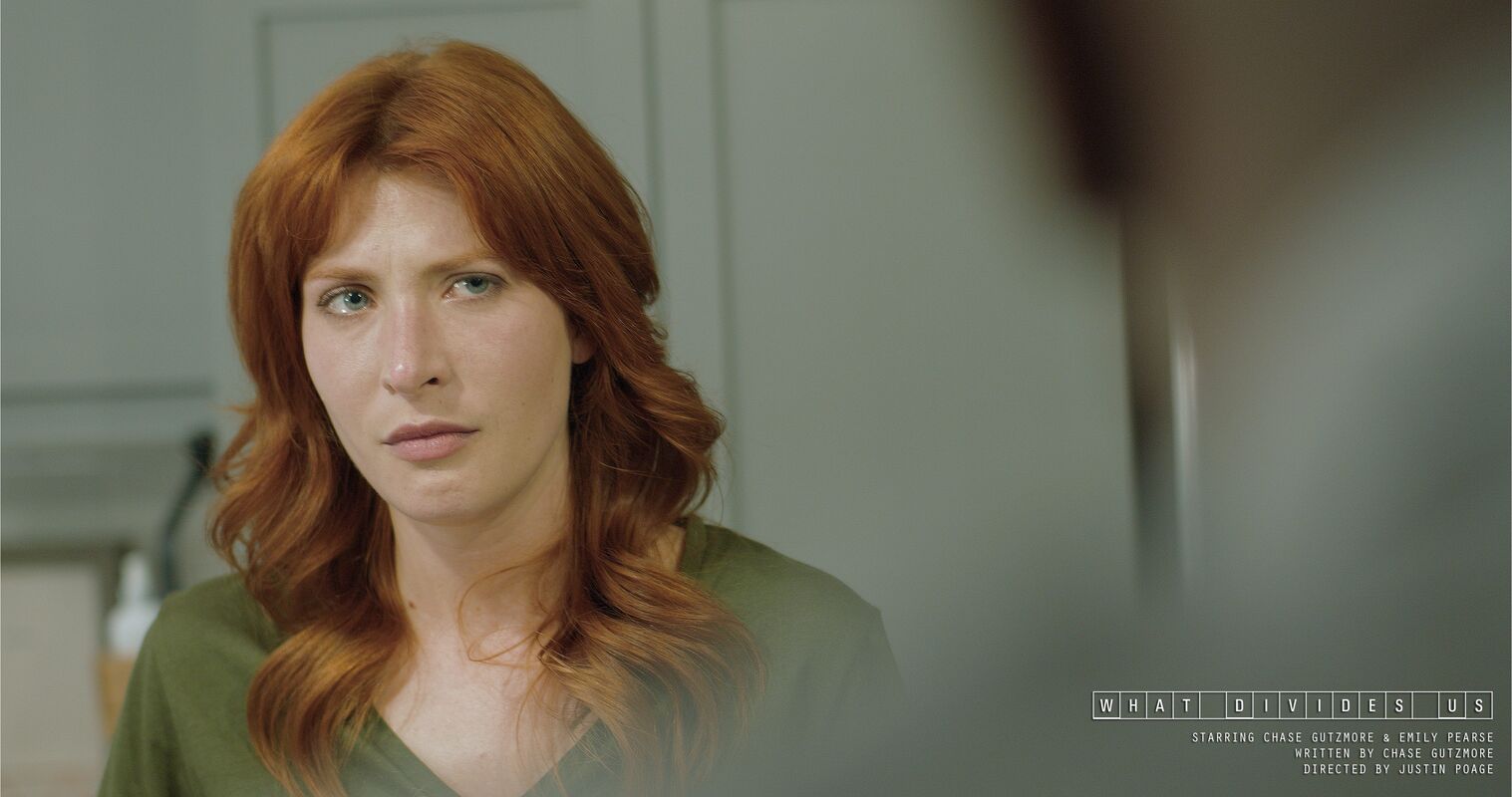 What was the initial inspiration behind your new film, What Divides Us?

Well the inspiration came from Chase Gutzmore the film’s writer. I’ve known Chase for some time and I’ve loved his work so when he brought this story we instantly clicked on how it needed to be done. In the times we’ve been living in and with the recent events of the past few years, Chase wanted to show the uncomfortableness and the annoyance of having to explain to someone what it’s like to be black. Especially when that person is someone you love. Both Chase & Emily locked in and delivered and both displayed the vulnerability we all face.

What Divides Us tackles topics related to interracial couples and the BLM movement. Do you feel a responsibility to use your platform to address vital topics such as these?

It’s my responsibility to address issues facing the black community in general, and with WDU we try and show the issues and exhaustion of having to explain to someone you love something that they’ve never wanted to and frankly have never had to understand because of the color of their skin. These issues are important because there are a lot of couples out there living that life and I’m sure a lot of them have had to have the uncomfortable but hopefully eye opening conversation we’ve shown with What Divides Us. 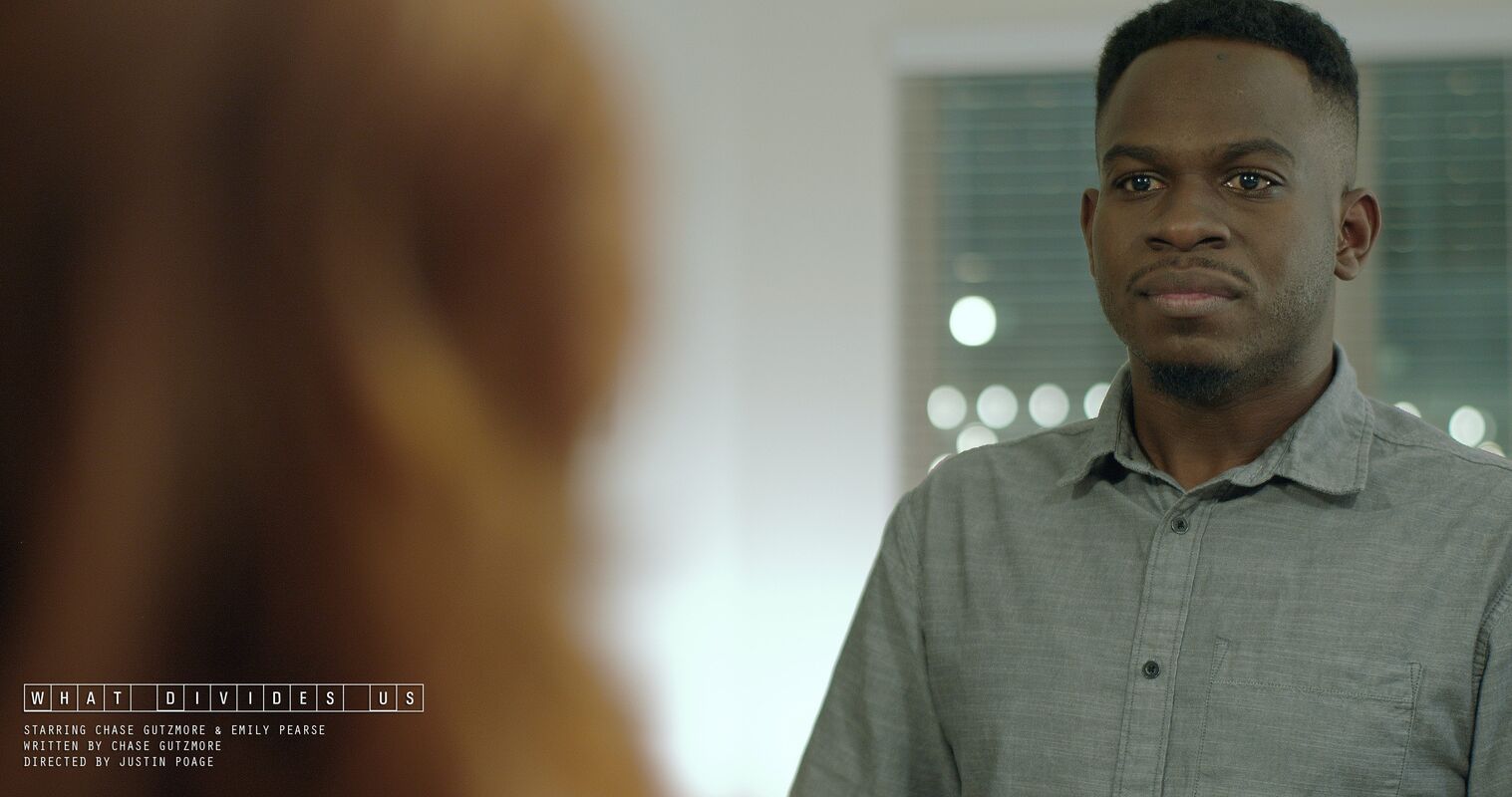 Do you prefer to tell stories that you have a personal connection with?

Absolutely. And when a story like this comes to me, while I may not be living it, I can definitely understand the need to showcase that side of life.

Do you prefer sticking to the words on the page or do you encourage your actors to improvise?

Filmmaking is a team sport. And while yes I do prefer when my actors stick to what’s written, I also encourage them to make the character their own. So when we’re breaking things down if an actor feels the character would be better serviced by saying this instead of that, as long as it’s in the confines of the vision I’m all for it.

I geek out about every part of the process differently but if I had to choose one part I would say editing. The process of putting it all together and seeing the spoils of everyone’s hard work makes everything else worth it. 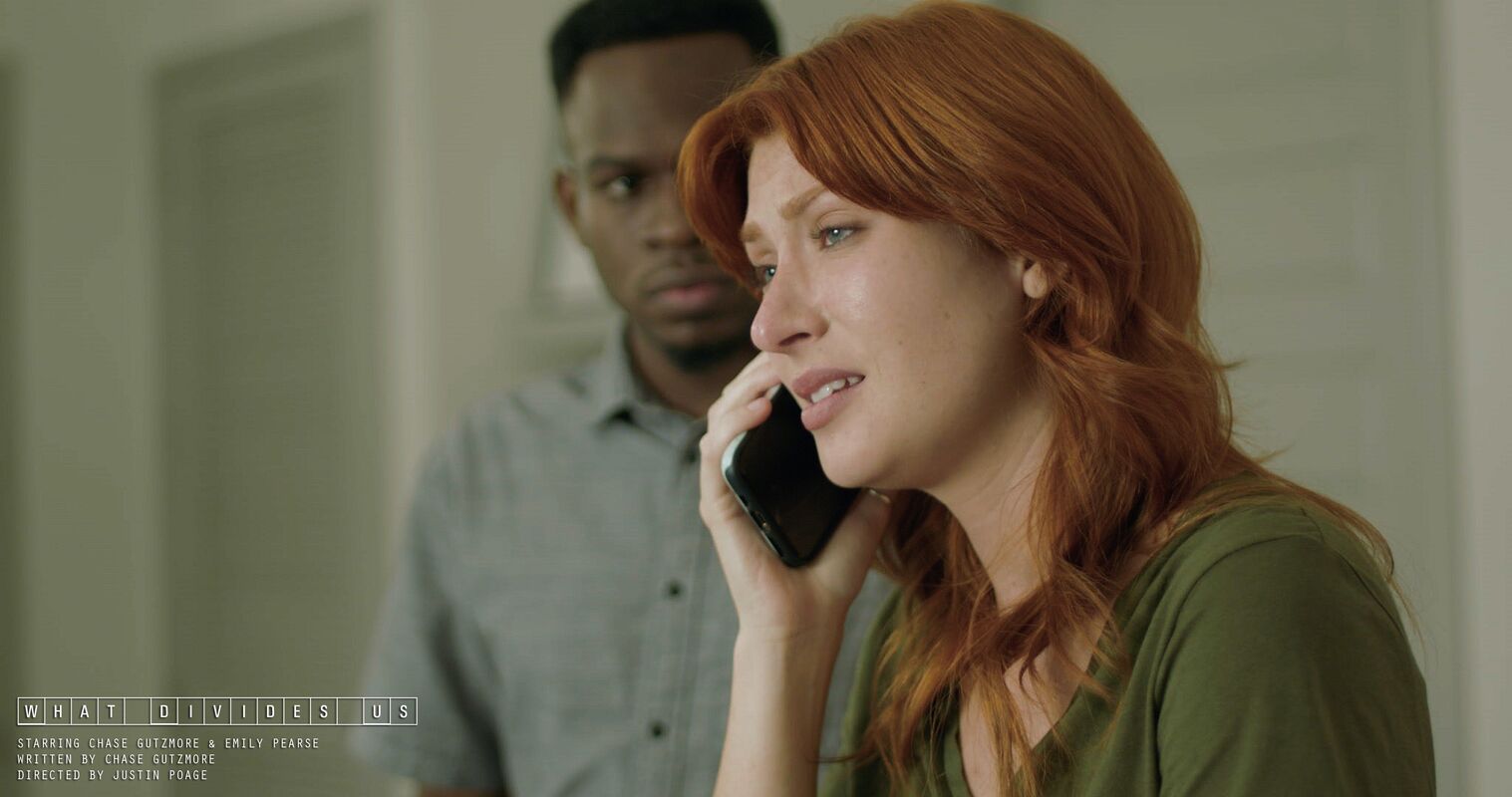 What Divides Us was written by one of the film’s stars, Chase Gutzmore. How closely did you and Gutzmore collaborate during the shoot?

Very closely. I loved what Chase wrote as soon as I read it so we both went into the shoot with equal excitement. We trusted each other to deliver so any add in lines I had or character suggestions he had flowed like water because we were both on the same page from the start.

You wear many hats: writer, director, producer, edit, and cinematographer. Which do you like most and why?

It’s directing hands down. That’s the floor general right there. The quarterback. I relish in the responsibility and the trust of leading a team. All I’ve ever wanted to do is tell stories and directing allows me bring all kinds of stories to life. 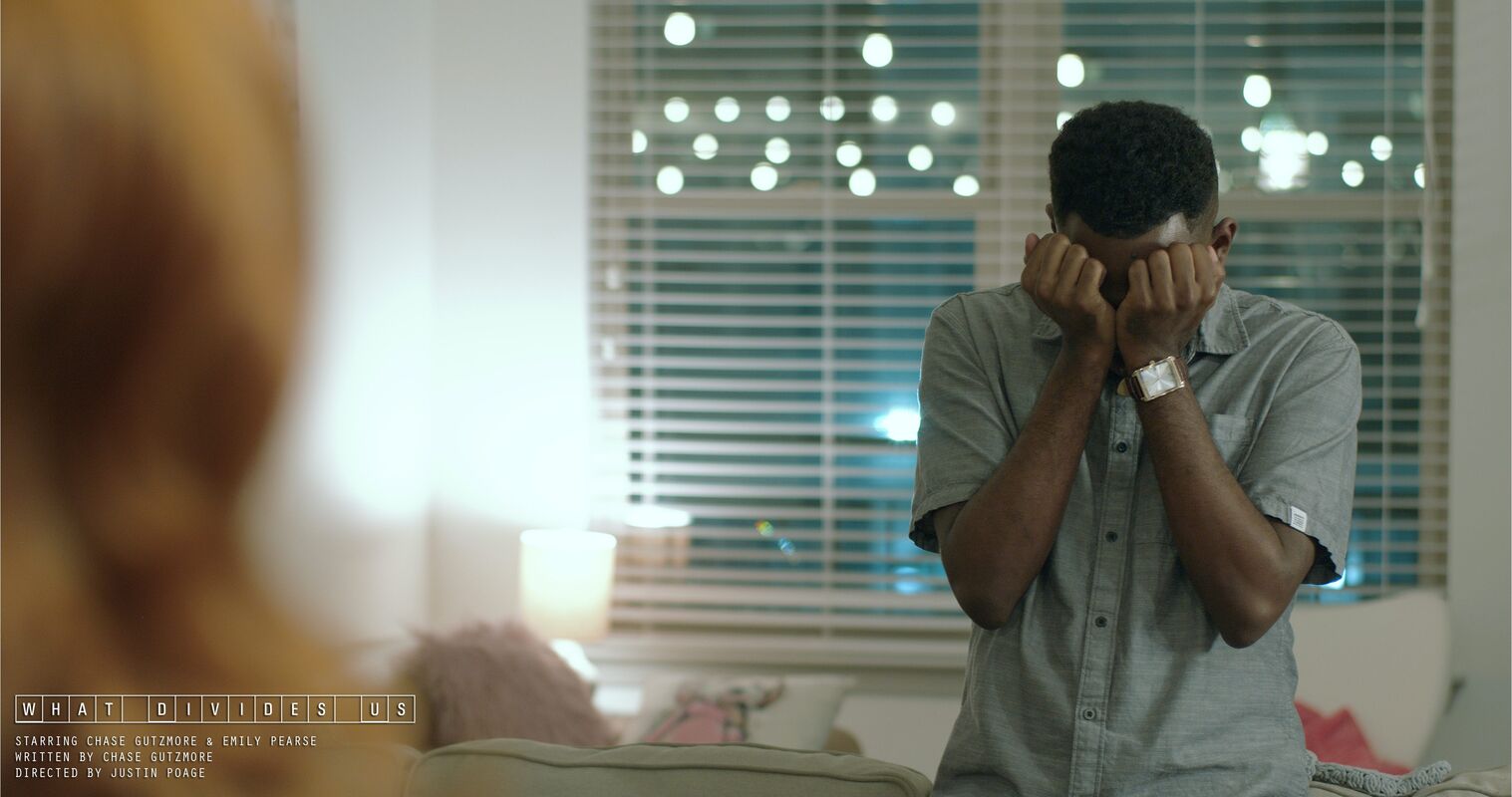 What is the most difficult part about juggling all these responsibilities?

Knowing when not to.

You’ve acted in two of your films, Express TakeOut and The Cure (2014). Is acting something you plan to pursue more in the future?

Oh God no. The only reason I’m in both of those films is because the person who I wanted to play the roles backed out at the last minute and since I knew all the lines I said what the hell why not. Okay that was a joke but in all seriousness the answer is still no. Acting is something I may have wanted to do as a younger man but directing stole my heart and I’ve never thought twice about going back.

You’ve worked on shorts and features. What’s the biggest difference between directing a short versus a feature film?

There is no real difference; you just finish one faster than the other. You’ve gotta bring the same intensity & passion to each one unless what’s the point. 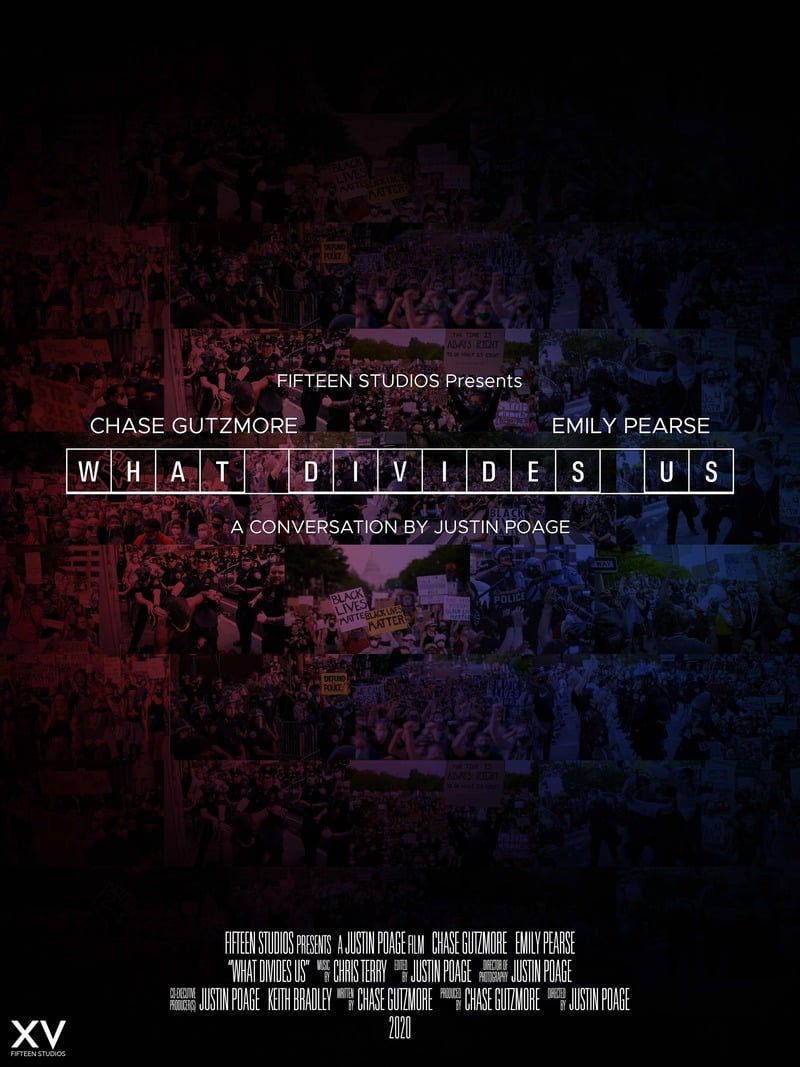 Are there any indie filmmakers or actors that should be on our radar?

There are a few good filmmakers who I’m proud to say are friends and colleagues. Bobby Huntley, Dani Coleman, Alan Brooks, Coke Daniels, and B. Todd Johnston are some that come to mind when I think of filmmakers putting out exceptional work.

We’re currently in pre production of a horror film I wrote based in Savannah, Georgia. It’s going to star Anthony Dalton II from Tyler Perry’s Sistas and Dawn Halfkenny from Saints and Sinners & The Family Business. Those two are phenomenally talented so I’m looking forward to them making my job very easy.

Do the work. Listen, appreciate, learn to play like yourself, and then do the work. 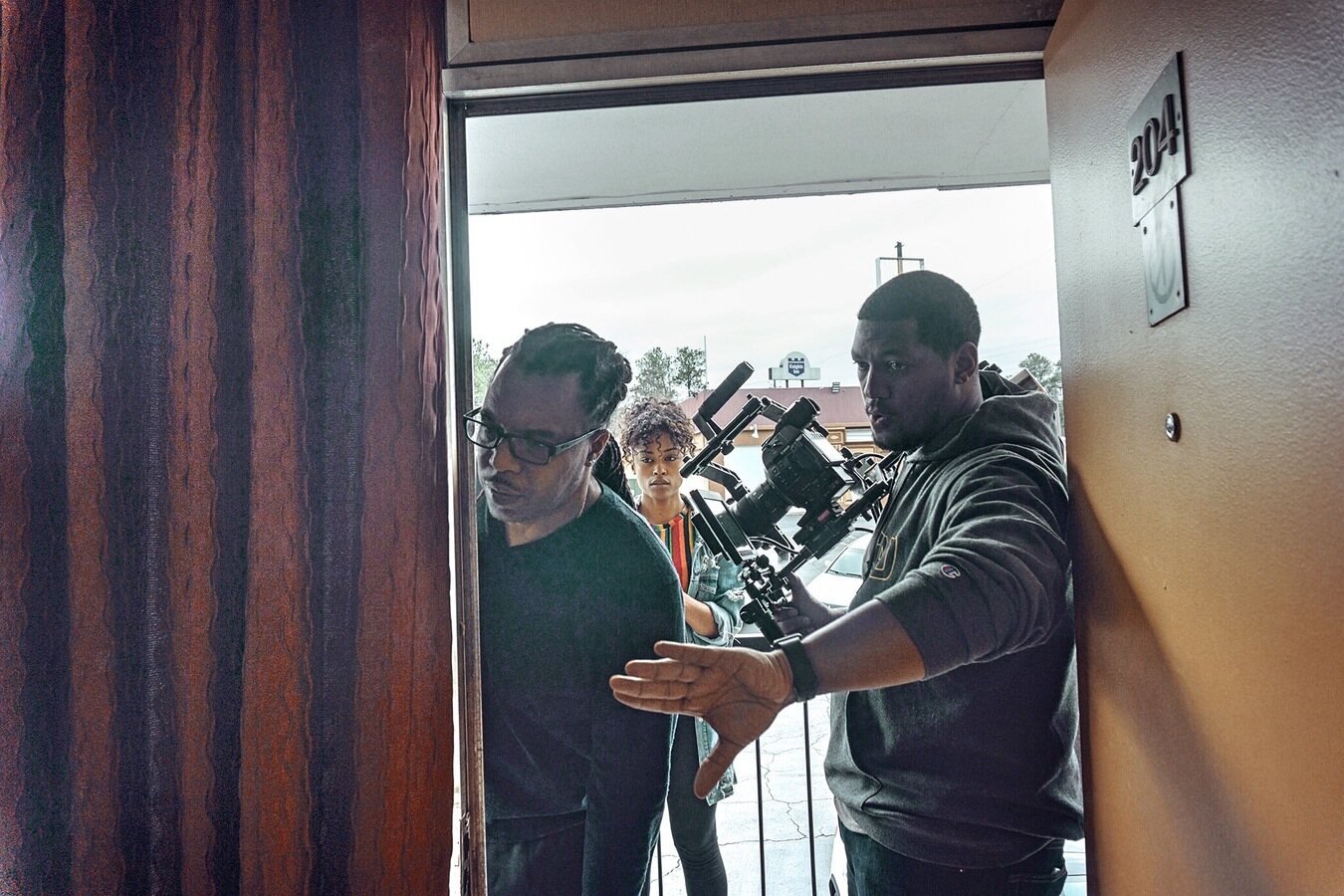 What’s your ultimate mission as a filmmaker? Name the most important thing you want viewers to experience when watching your projects.

I want viewers to appreciate how much I appreciate them. I’m never going to phone it in and I’m always going to treat you with respect. And I want viewers to be able to see that in my work so when they leave the theater (or turn off the TV) they have the feeling that I appreciated their time and tried my best to leave them with something meaningful.

Bad Boys (1995). And for a few reasons. Beverly Hills Cop 3 had just come out the year before so we knew there could be a black action hero seeing as Eddie had done it several times before. But the BHC movies weren’t action first movies, they were comedy first movies. Same with Danny Glover and the Lethal Weapon films. But when Bad Boys came out not only did you have the two funniest men in comedy at the helm but you had them kicking ass & taking names.

Naturally it was going to be funny because it’s Martin (Lawrence) and Will (Smith) but the movie never treated the comedy as a cover for a bad action film. Bad Boys is the perfect action movie and the perfect comedy movie rolled into one. No one has even come close to topping it. 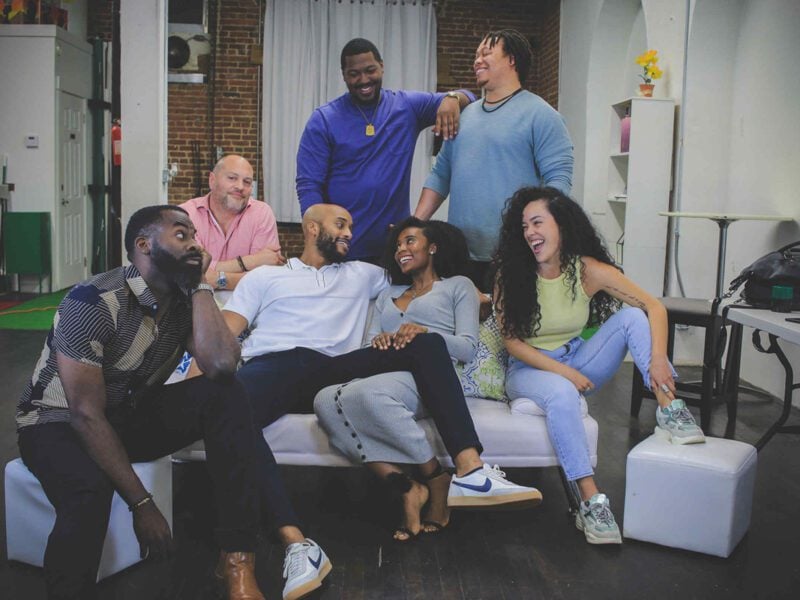