Why you need to watch independent film ‘Between Pain and Amen’, directed by Toma Enache

The second feature film by indie director Toma Enache, Between Pain and Amen tells a story about a young composer tortured and brainwashed while in prison, and his strength to survive. Based on true events, the Romanian filmmaker created the independent film to shine a light on the Soviet influence over the country.

After studying in Vienna, the protagonist comes home to Romania and gets engaged, trying to move forward with his life. But the composer gets arrested by political police, and taken to Pitesti Prison to be used as a lab rat for torture-based experimentation.

As our protagonist endures intense brainwashing and torture techniques in prison, he doesn’t lose faith throughout it all. As the title Between Pain and Amen implies, his strong religious belief keeps the composer alive. Through all his trials, the composer writes his magnum opus “Ode to God”, to connect him and his fiancee.

Shining a light on tragedy

When Toma Enache learned about what went down at Pitesti Prison during the communist regime of Romania, he knew he had to bring that story to life. “I had the privilege to speak directly to some of the few survivors of the horrible experiment, which helped me better understand how things had happened.” he mentioned when discussing the film.

Between Pain and Amen is an independent film trying to shine a light on the strength of faith, and how even in the darkest situations, there’s a way to stay strong and survive.  “….There is a value superior to life, whose effect is precisely the triumph of the latter, when everything seems lost.” Enache also mentions. 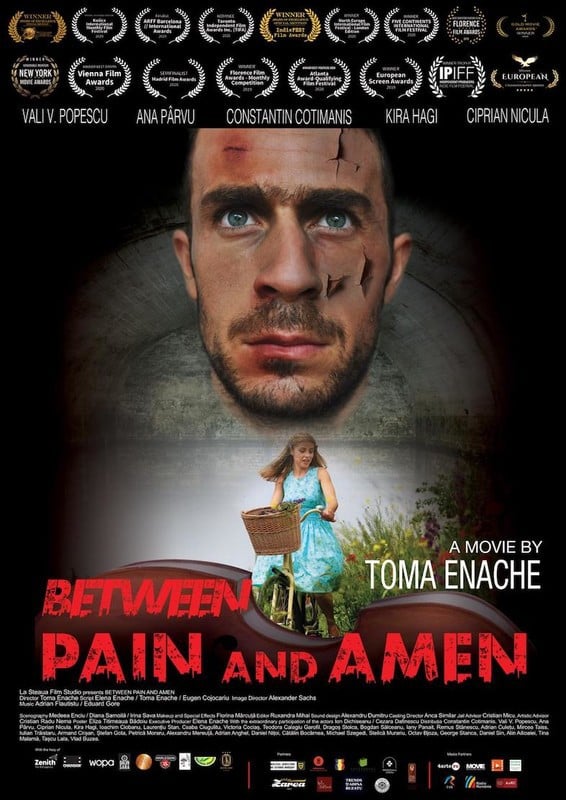 One of Romania’s finest

Even with Between Pain and Amen being Toma Enache’s second feature, it’s clear the power he holds as a director. His first feature, I’m Not Famous but I’m Aromanian was the first film ever made in the Aromanian language. Revelled for telling such a beautiful story in an uncommon language, Enache won numerous awards for the film.

Between Pain and Amen premiered back in 2019, and since its premiere has been revered as well for its heartbreaking story and excellent performances. There’s even talk that Romania will choose Between Pain and Amen as its official selection for the Academy Awards, which would be a huge honor for Enache.

With 27 wins so far at a variety of international film festivals, it’s no surprise Between Pain and Amen is recognized as a highlight of independent film. Toma Enache knows how to tell powerful stories with no fear, and we can’t wait to see what his next work brings.