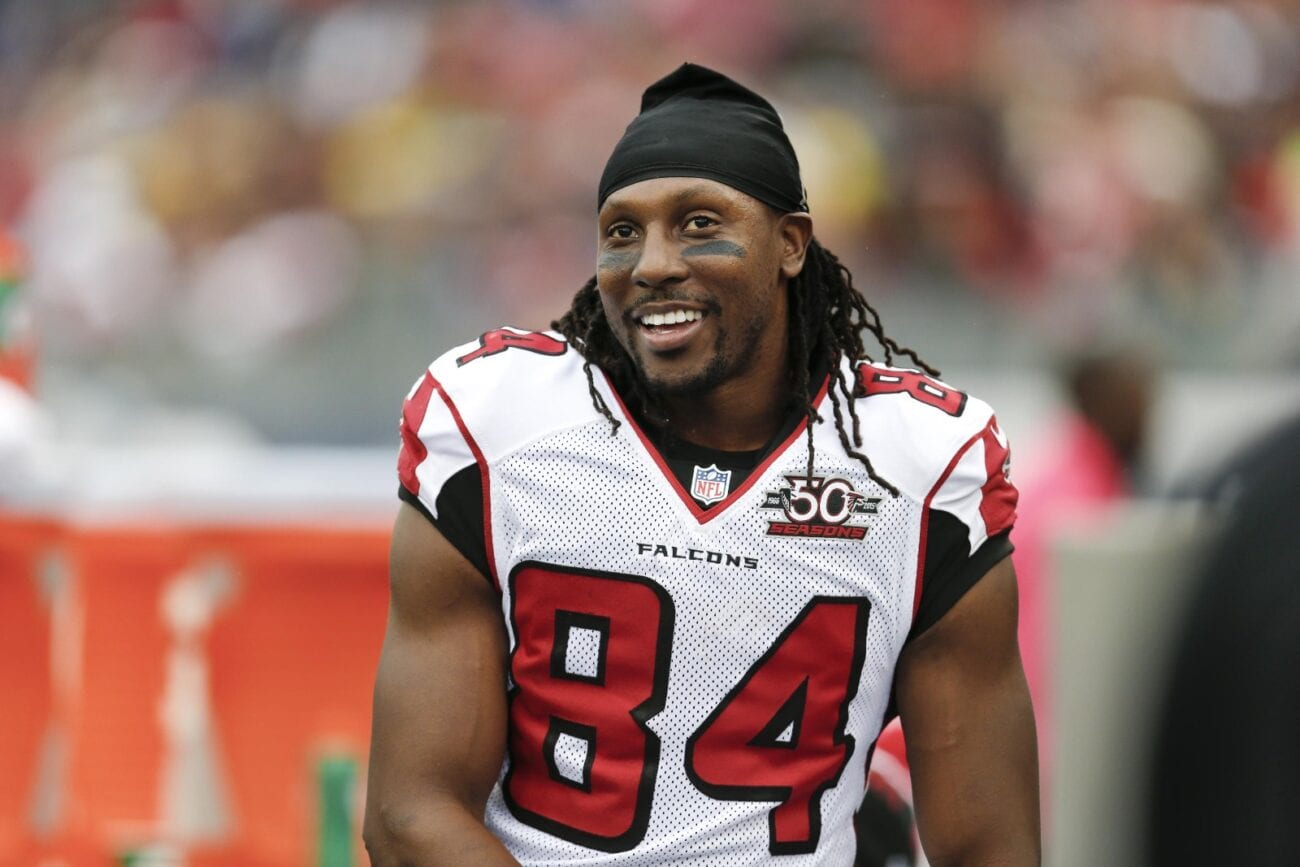 A football player took to Twitter this week to stir up some drama, and we’re here for it. So what went down exactly? 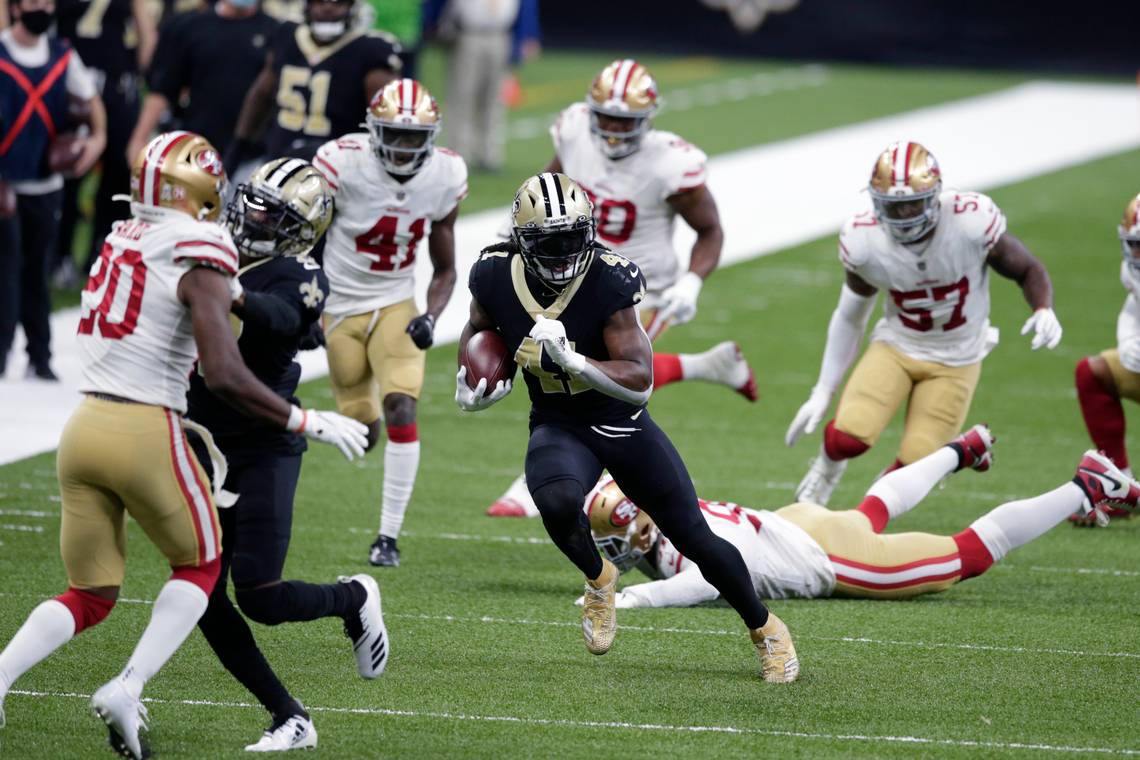 When New Orleans Saints Drew Brees tapped out of an upcoming game due to a rib injury, the team faced a big choice: who was going to be the stand-in quarterback?

One option was an offseason acquisition named Jameis Winston, who looked pretty uncomfortable the last time he stood in as quarterback.

Another option that the Saints had was Taysom Hill, who they ultimately chose to play against the Atlanta Falcons. And, luckily for him, he kicked their butts, passing for 233 yards and rushing two touchdowns in his NFL start. 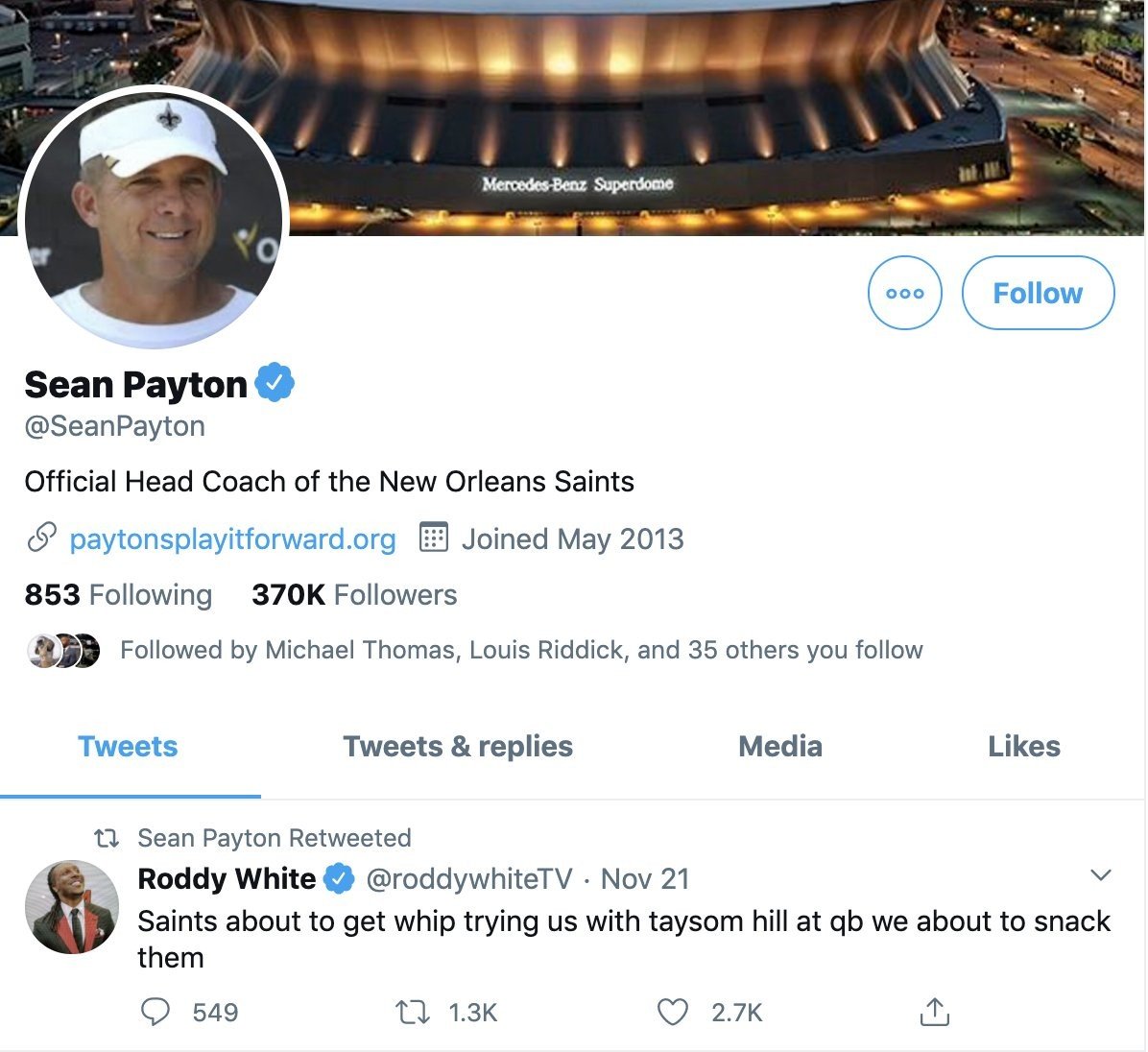 Following their epic 24-9 win, Saints Coach Sean Payton retweeted a two-day-old tweet from a former Falcons receiver Roddy White, who thought Atlanta was gonna win against Hill at the time. White tweeted: “Saints about to get whip trying us with taysom hill at qb we about to snack them.” Awkward!

American sportswriter Ian Rapoport brought even more attention to the retweet, quoting it himself and writing “Savage” accompanied by a couple flame emojis. 🔥

Si.com praised the coach, asking “Is it possible that Payton is the great quarterback whisperer of this era, and if he is not the great whisperer, is it possible we have underrated his role in the Payton-Brees partnership through all of these years?” It seems like we may have indeed overlooked Payton’s influence.

In his first (of many) starts, #Saints QB Taysom Hill finished 18 of 23 passing for 233 yards with 51 rushing yards and 2 rushing TDs in a blowout win over the #Falcons.

Payton wasn’t the only person who took to Twitter to troll White’s tweet. Canal St. Cardinals wrote: “Drew Brees and Matt Ryan threw the same number of touchdown passes in this game”, and later made a witty election jab when critiquing the Falcon’s game play: “Falcons after the first drive: STOP THE COUNT”

ESPN anchor Stan Verett offered an icy comment on the game, writing: “I remember a time when the saints used to get up for a game against the falcons. Now, they’re just a speed bump on the way to another division title.”

Ian Rapoport also tweeted: “In his first (of many) starts, #Saints QB Taysom Hill finished 18 of 23 passing for 233 yards with 51 rushing yards and 2 rushing TDs in a blowout win over the #Falcons. Sean Payton 1, The World 0.” 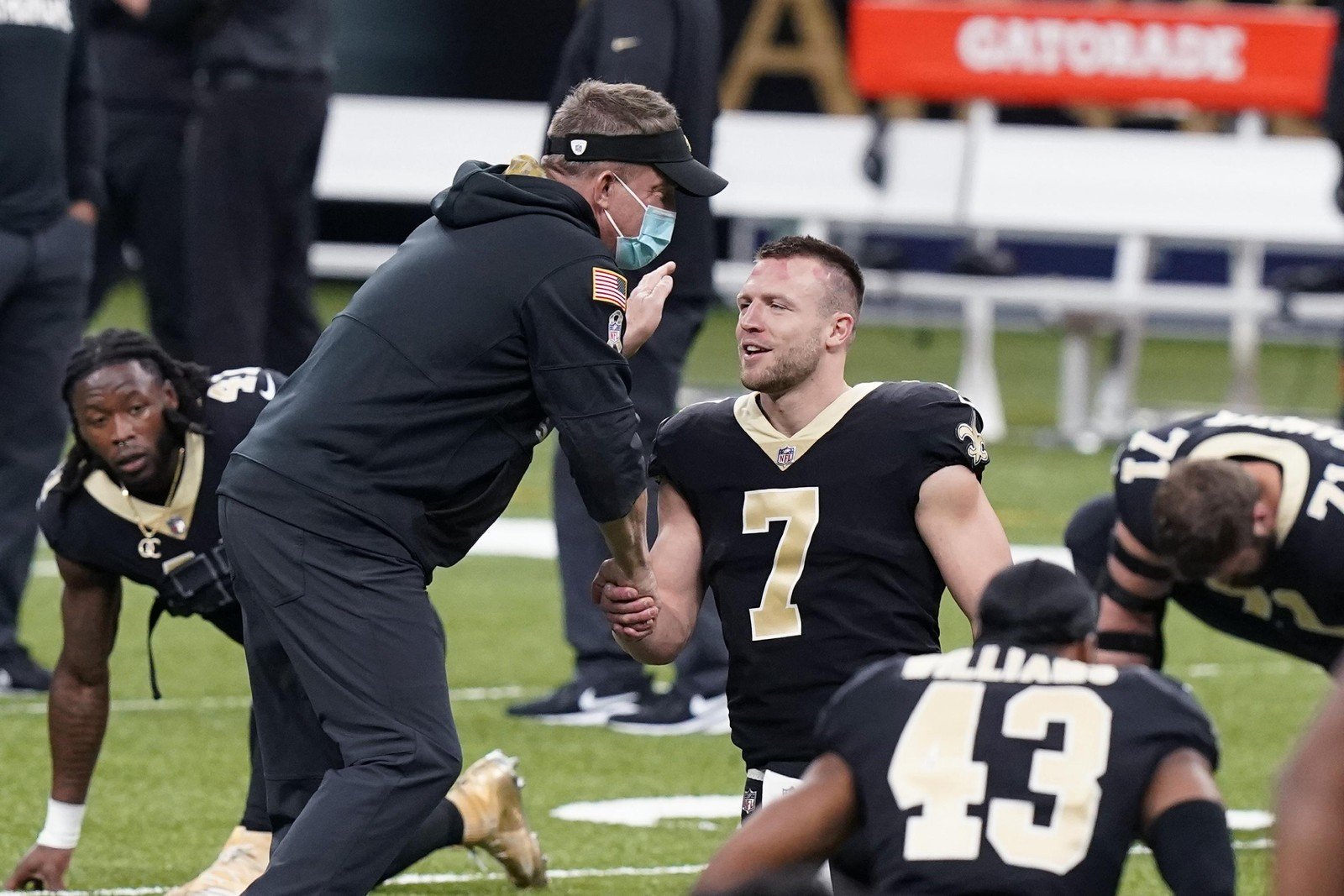 Payton knew his decision to start Hill instead of Winston was being questioned and laughed at by the media and former NFL players.

White had spent the week leading up to the big game smack-talking Payton and his team for starting Hill, but then switched his criticism to the Falcons for losing to a guy playing “backyard football”. “Man playing backyard football and beating us” he said. People quickly commented, one user @tolovelivelaugh stating “That’s why it’s not good to talk so much smack before a game.” 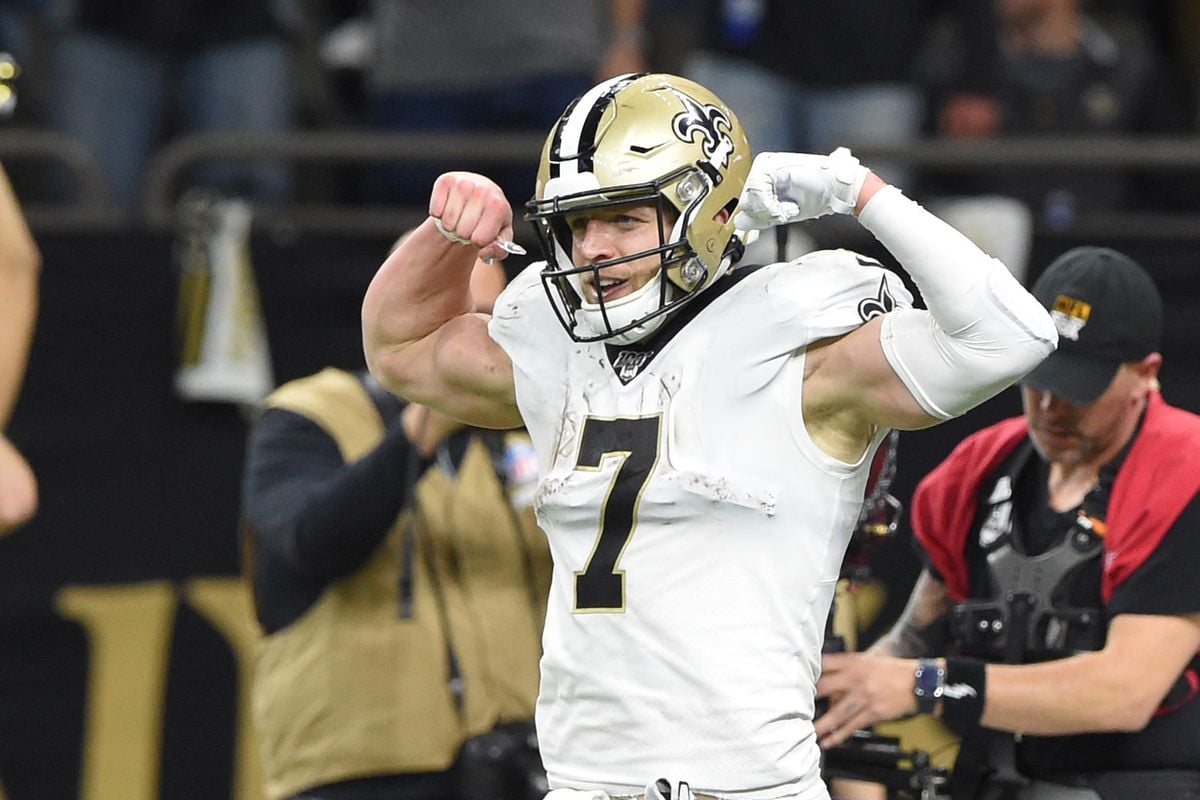 Another user responded to that tweet, writing “Especially not when your team is dumpster juice.”

Payton’s tweet has since gone viral, while the Saints coach praised Hill for his ability to get “comfortable with the flow of the game.” His exemplary defense was also commended.

Payton made no indication whether he’d start Hill again next week while Brees is still out, but we’re sure that whatever happens there’ll be some drama along with his decision.

Hill, just thirty-years-old, is under contract for 2021. He agreed for a two-year $21 million extension right before the season. After recent rumors stating Drew Brees might retire after 2020, Hill could very well have a shot at a full-time starting position. 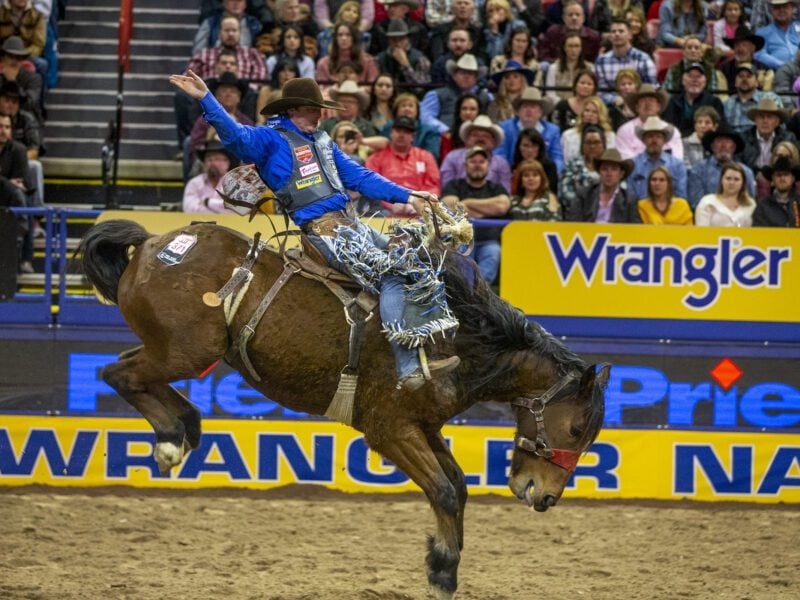 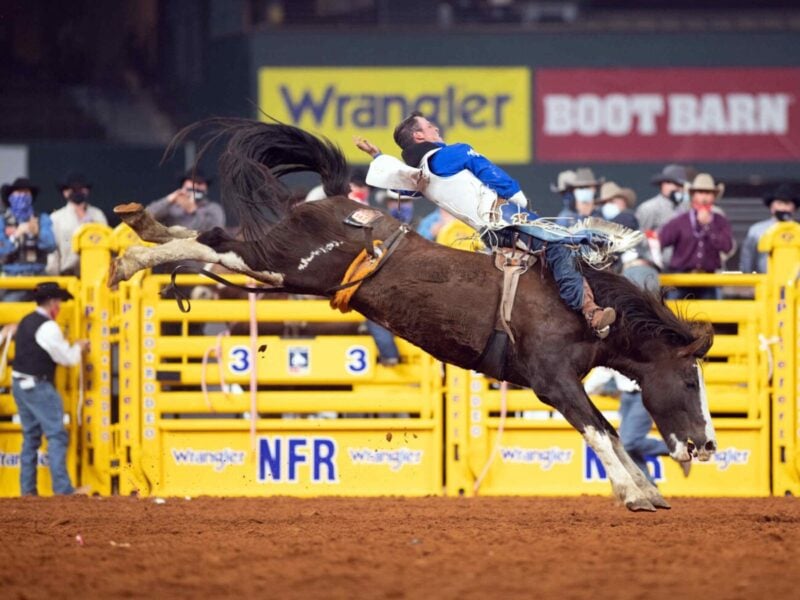 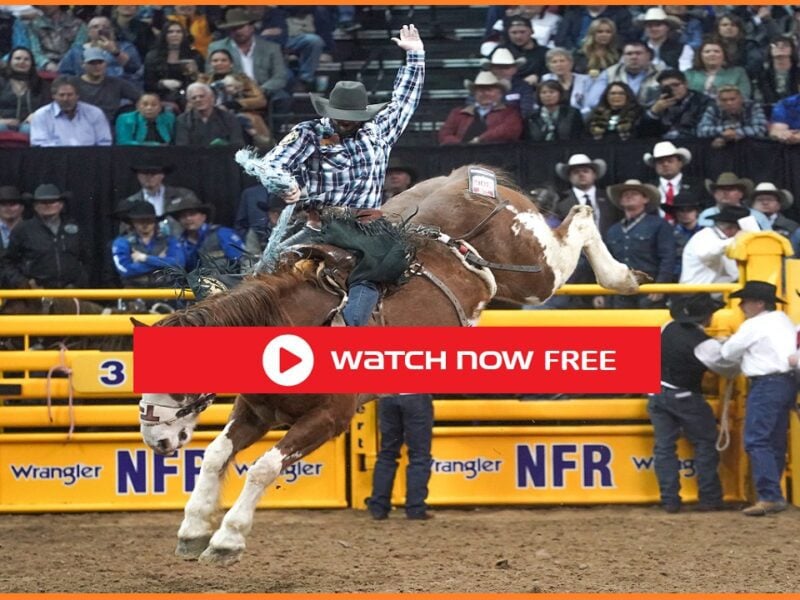