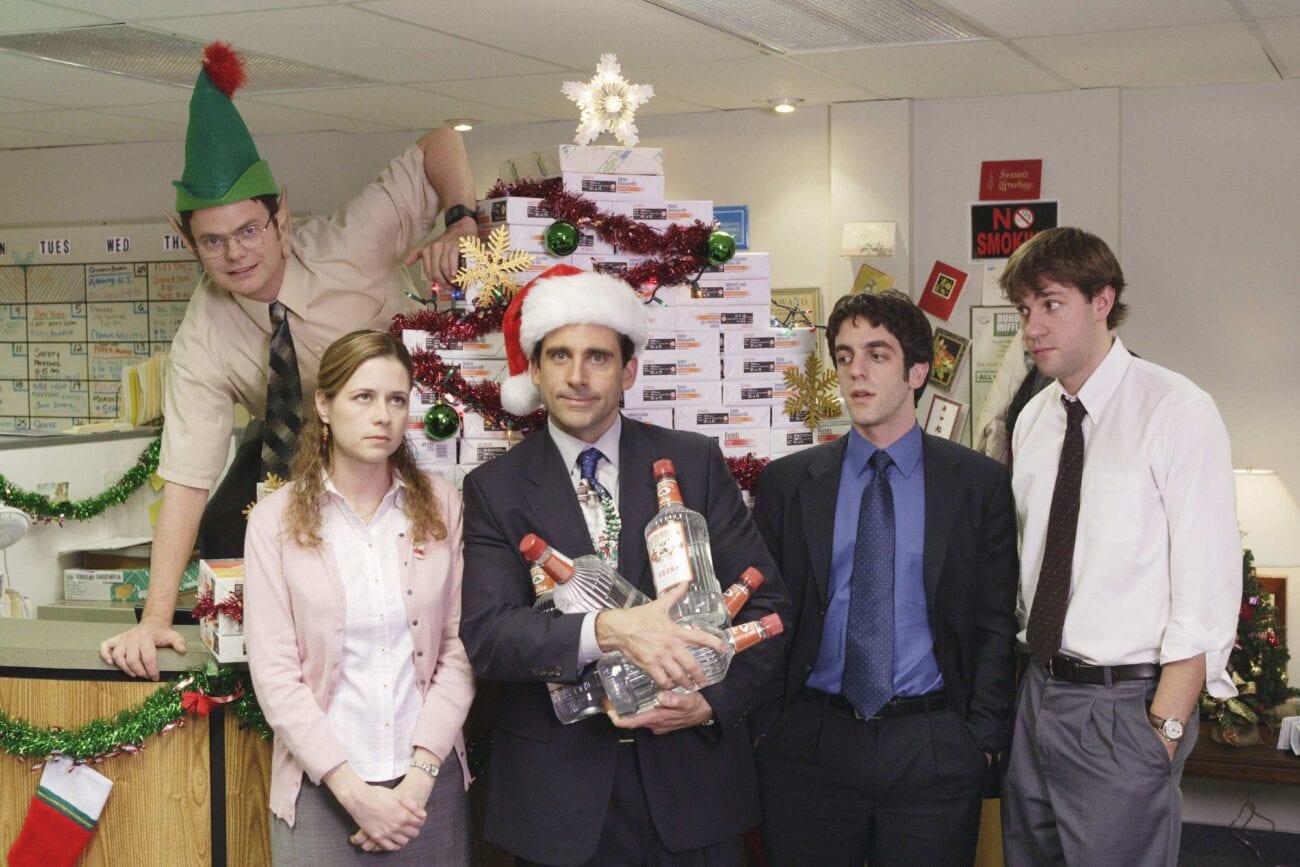 Need Christmas cheer? These are the best ‘The Office’ holiday episodes

Holidays at Dunder Mifflin’s Scranton branch were never conventional, which is why each Christmas episode of The Office is as unique as the characters themselves.

Based on the British TV series of the same name, The Office only actually had seven-holiday themes episodes. Some are great, while others? Eh . . . let’s just say that jokes such as ‘Tr*nny Claus’ in “Secret Santa” probably aren’t a good look for today’s mainstream audience.

While Michael Scott, Jim & Pam Halpert, Dwight Schrute, and the rest of the Dunder Mifflin gang closed their office doors nearly seven years ago, we’re still invited to join their holiday hijinx every Christmas season on streaming, where we can party with our favorite paper company as they take the time to remind us what matters most during the Christmas season – booze, presents, and a great office party. 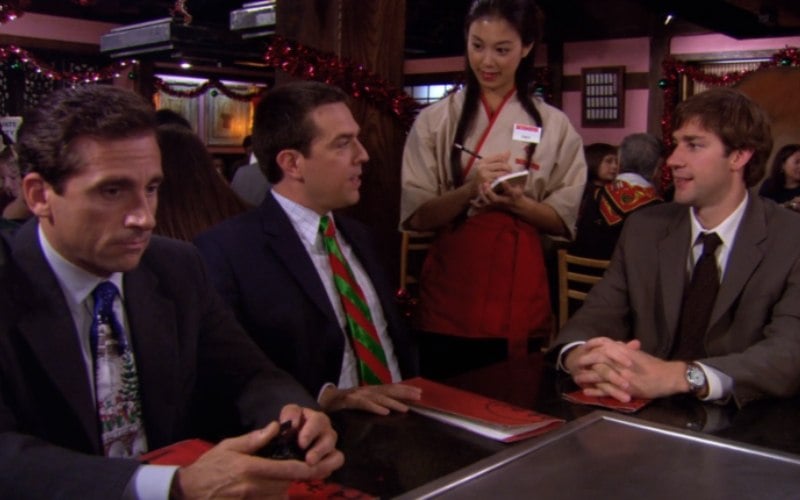 Originally aired in 2006, this classic Christmas episode takes place in a season where The Office finally found its footing, meshing just the right amount of awkwardness with heart, an aspect that didn’t come all that quickly during The Office’s first couple of seasons (especially season 1).

Half the episode takes place at a Benihana restaurant, where some of The Office men are trying to take Michael’s (Steve Carell) mind off his recent breakup with Carol.

Understandably, Carol is a bit weirded-out when Michael decides to cut & paste his own head onto the photo of Carol’s ex-husband at a family ski trip, a scene where perhaps singer James Blunt hit his apex thanks to Michael Scott playing on a loop a 30-sec sound clip of “Goodbye My Lover”. 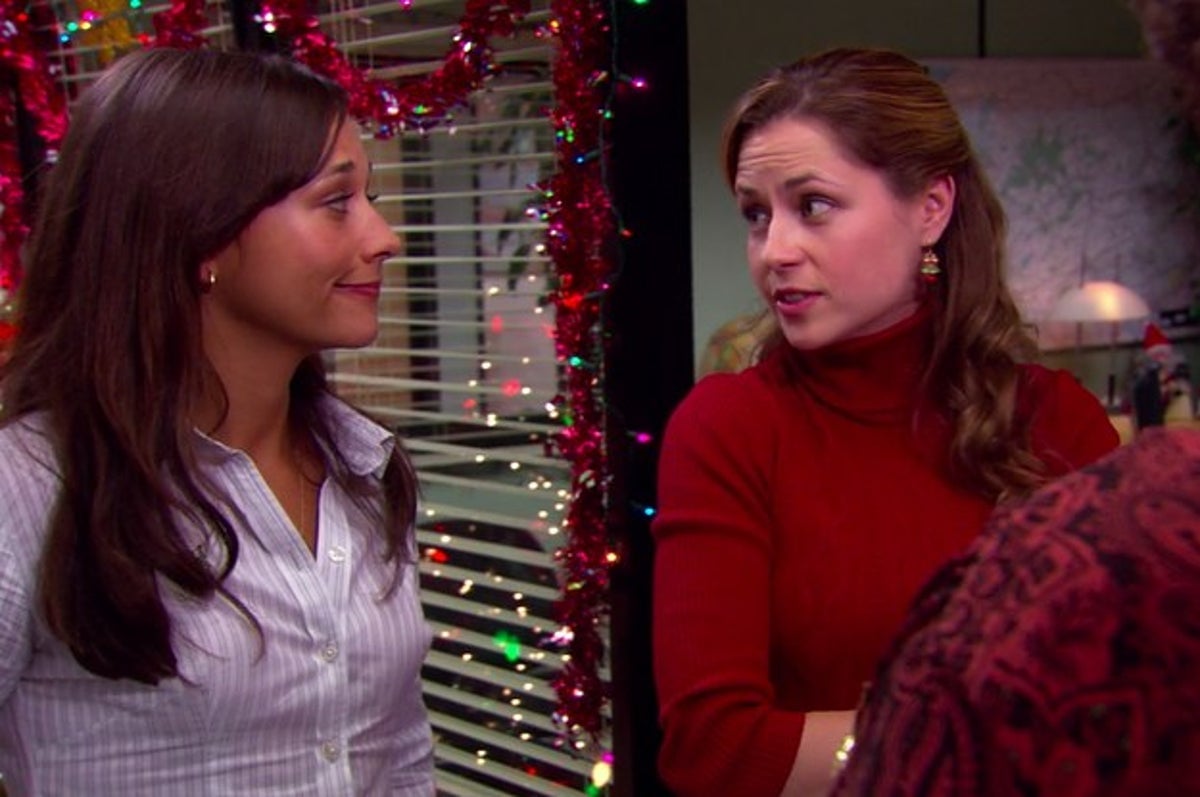 Back at the office, Angela (Angela Kinsey) has taken full reins over the Party Planning Committee, leaving both Pam (Jenna Fischer) & Karen (Rashida Jones) to rebel and host a Christmas party of their own, dueling with Angela’s Nutcracker-themed party and leaving the office split on whose party to attend.

“A Benihana Christmas”, directed by the late Harold Ramis (Ghostbusters, Caddyshack) was full of memorable moments that still hold up nearly fifteen years later, such as Michael, drunk off of Nog-a-sakes, calling Benihana “Asian Hooters”, and office teddybear Kevin (Brian Baumgartner) conflicted on which party to attend simply on the basis of what food is being served. 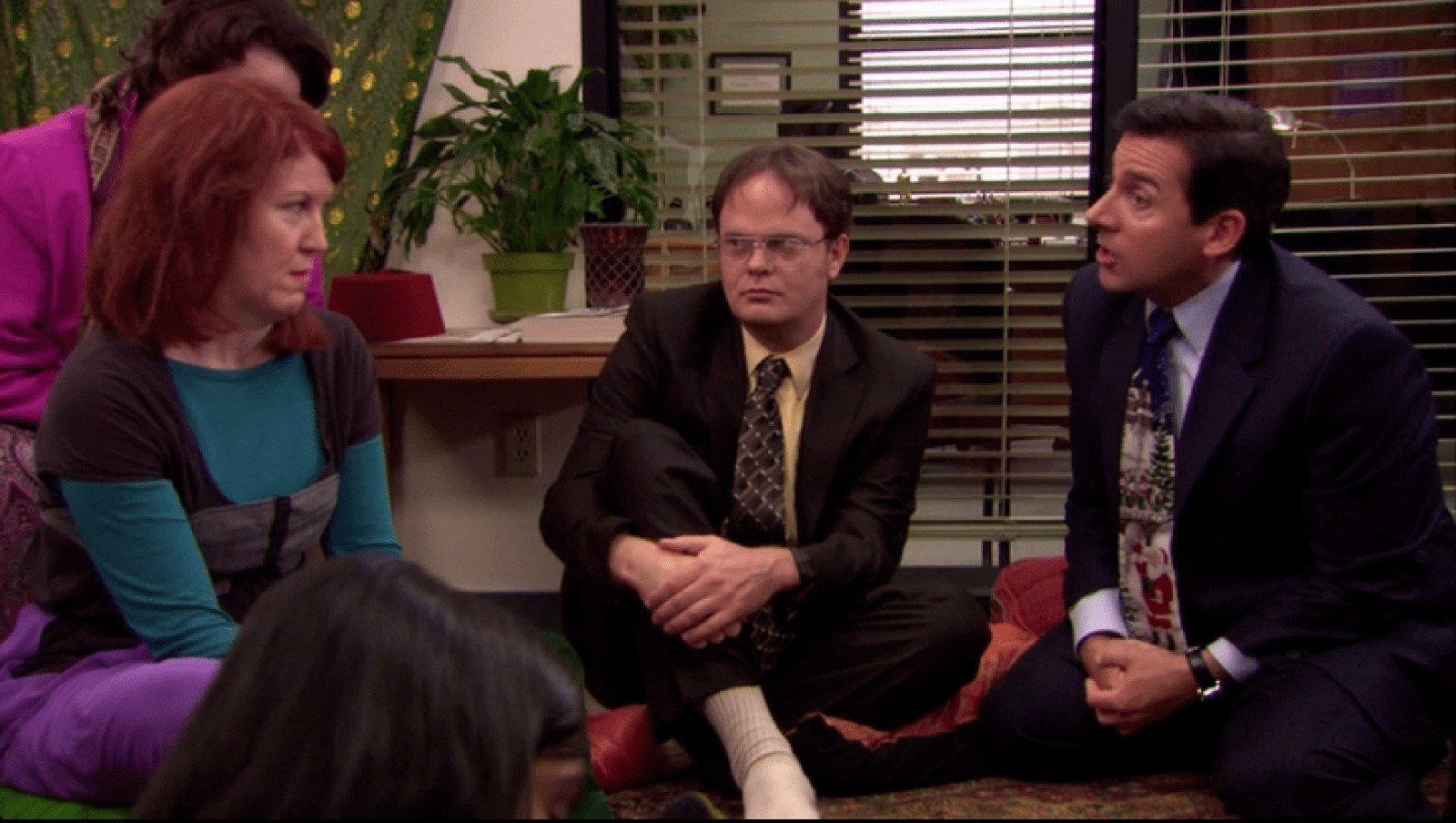 This episode, which aired in 2008, isn’t as beloved as the aforementioned “Benihana Christmas”, as “Moroccan Christmas” centers around a topic that some don’t find as simple of a comedic target. . . Meredith (Kate Flannery) and her struggle with alcoholism.

The episode takes a large swing at this subject matter, sprinkling in just the right amount of comedic tone to make it work, in our opinion, having Michael basically drag her into a recovery facility by the end only to realize that you can’t ACTUALLY force someone into rehab as if they’re a convict. 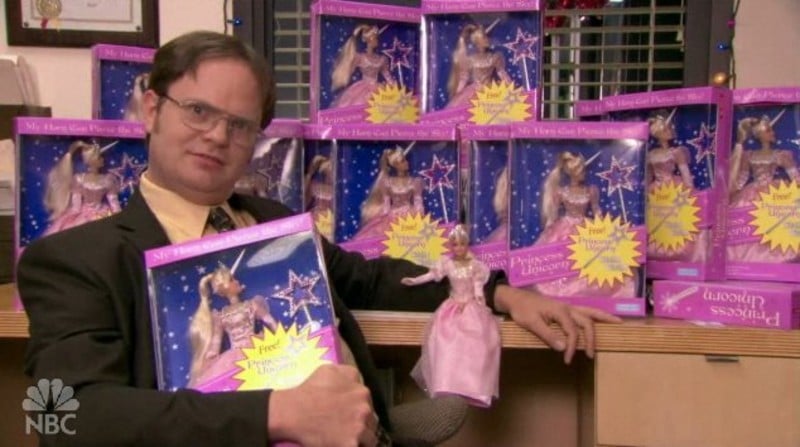 A side plot sees Dwight (Rainn Wilson) buying up the season’s most popular toys and re-selling them above market value, something that we might have also seen from Office opportunists Creed (Creed Bratton) or Ryan (B.J. Novak).

It’s also the Christmas episode where Phyllis (Phyllis Smith) blows the lid off of Angela’s warehouse affair with Dwight, at a time where she’s currently engaged to Cornell grad Andy (Ed Helms).

“Moroccan Christmas” isn’t for everyone, but it’s just right for us. 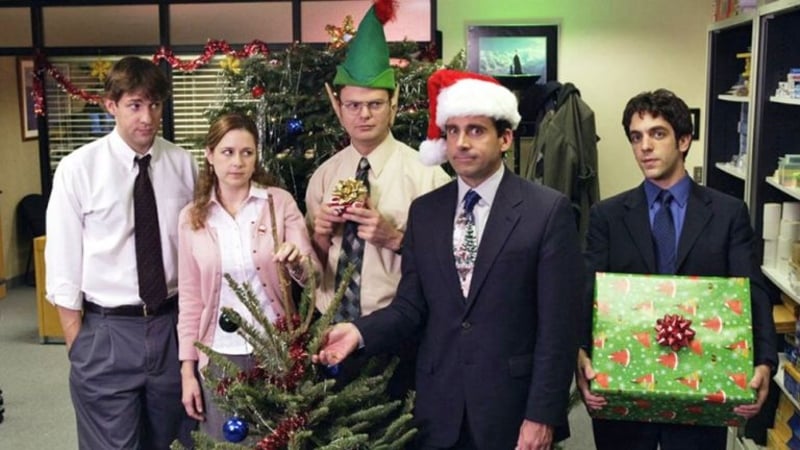 Considered by many to be the best Office Christmas episode, “Christmas Party” offers some of season 2’s sweetest & most gentle moments, including the famous ‘teapot’ gift which Jim (John Krasinski) wishes to give to Pam during a ‘Secret Santa’, filled with little inside jokes and cute mementos between the two.

It comes at a time where Jim & Pam really aren’t a thing yet, giving us Office fans something to root for just as Michael, who’s unhappy with his gift of an oven mitt, decides to change the Secret Santa into a White Elephant.

Other great moments of “Christmas Party” include Kevin drawing himself and purchasing a foot soak, Michael going $380 above the Secret Santa budget to buy man-crush Ryan an iPod, and Kelly (Mindy Kailing) getting drunk off her rocker when Michael decides to break company policy and purchase booze for the seasonal event.

The Office is expected to leave the streaming platform Netflix on January 1, 2021, and jump over to NBCUniversal’s streaming service, Peacock. 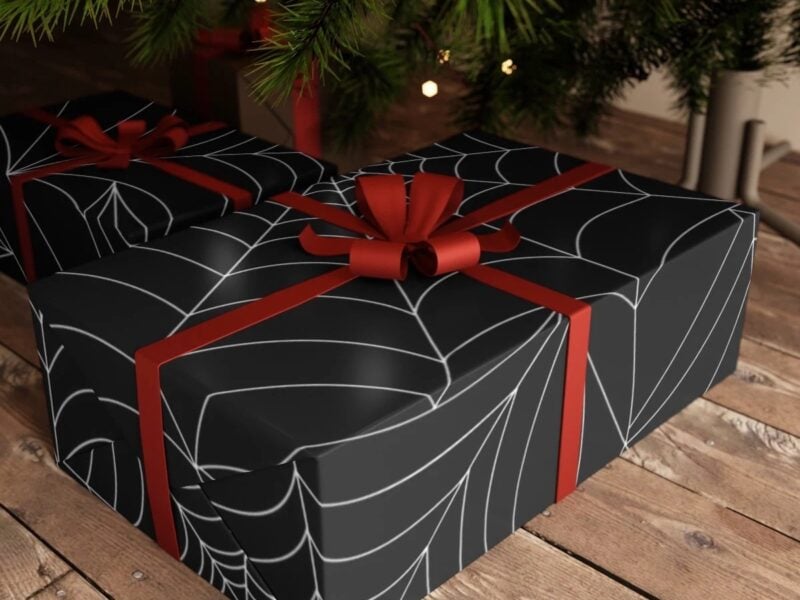 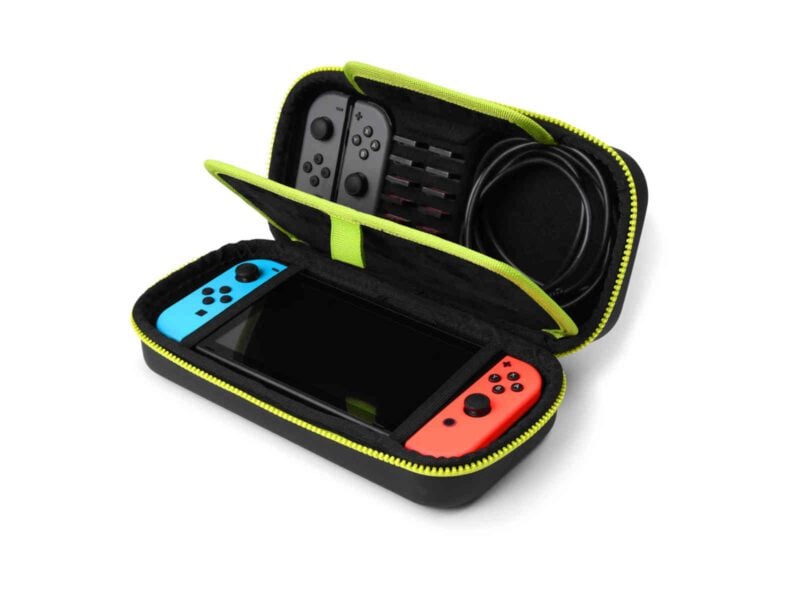