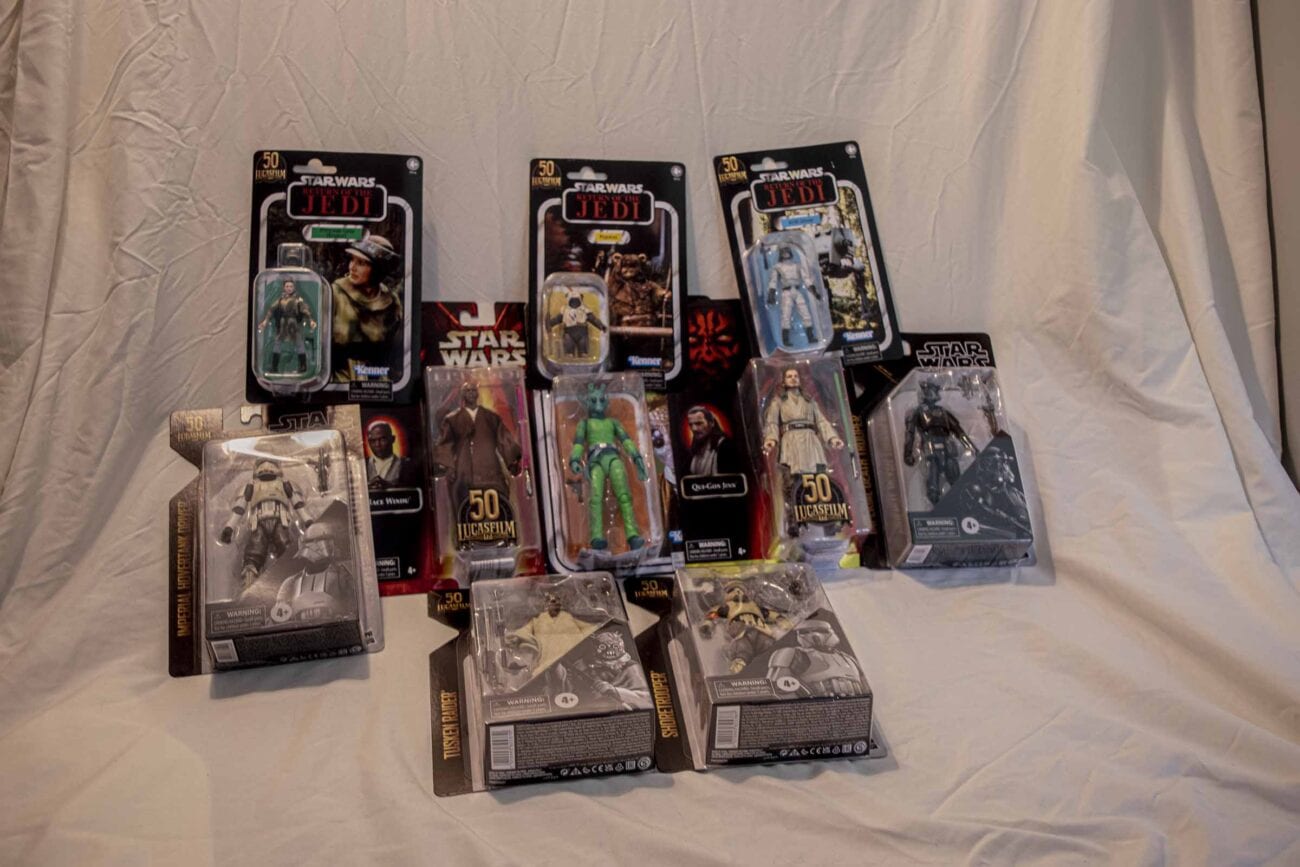 As Mark Hamill himself said on Twitter today, “I’m beginning to accept the fact that I’ll probably never do another movie that gets its own day.” When the first Star Wars came out, no one had any clue what the franchise would grow to be fifty years later. Yet with all the movies, TV shows, specials, and toys combined, Star Wars is one of, if not, the most financially successful franchises on Earth.

To commemorate the 50th anniversary of the first time we read the words “In a galaxy far, far away. . . .”, Hasbro is releasing some new amazing figurines that have yet to hit the market to date. As Hasbro was gracious enough to send us the figurines for Star Wars Day, we’re here to show off the figurines released between today and this summer. 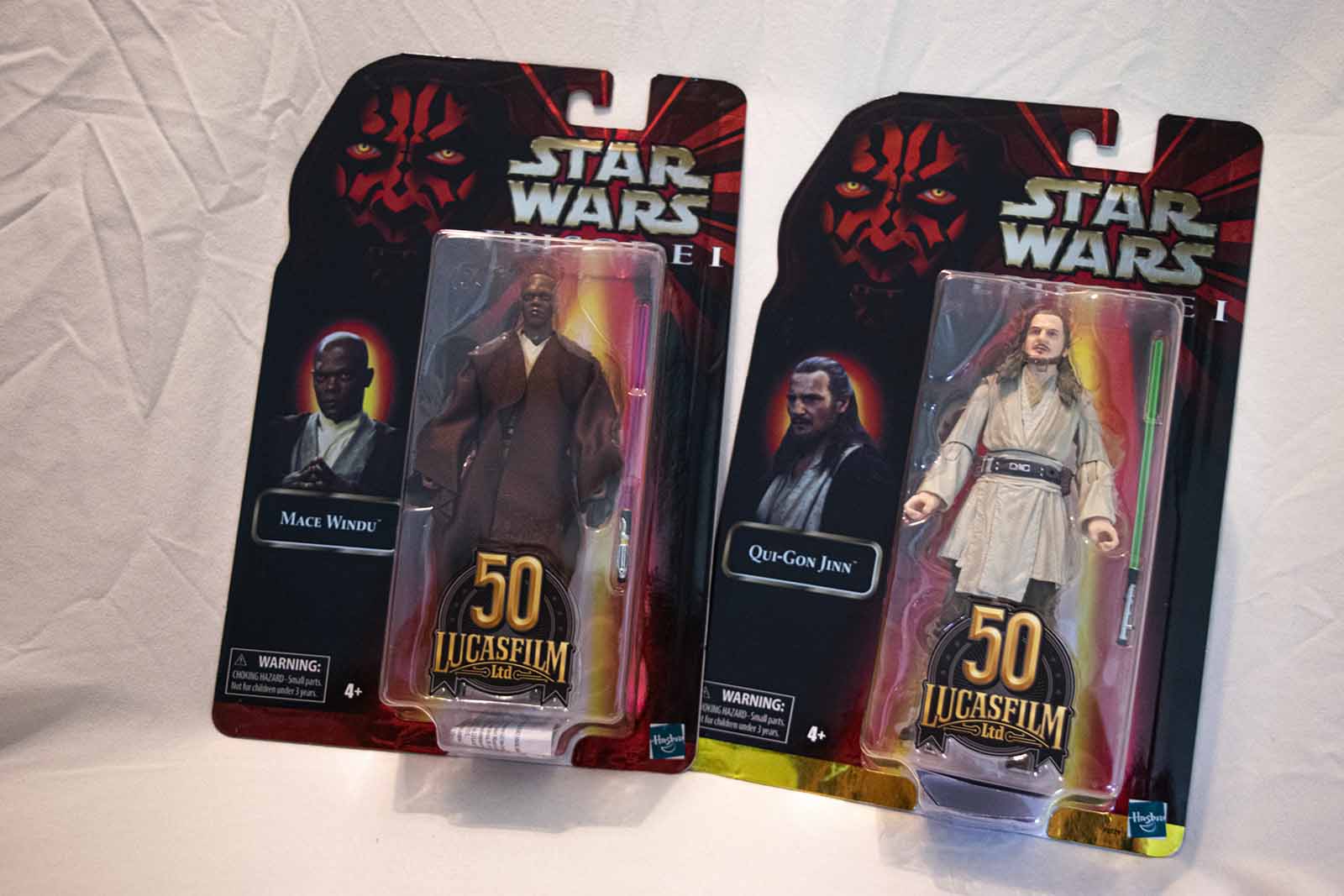 Back to the Jedi Order

If you missed these Black Series figures the first time around, you don’t want to pass up your opportunity to score these bad boys. In addition to Qui-Gon Jinn & Mace Windu, you can score re-releases of Battle Droid & Jar Jar Binks. Of course, these new re-releases are also for a limited time for the anniversary. Don’t let these iconic Episode 1 figures pass you by again. 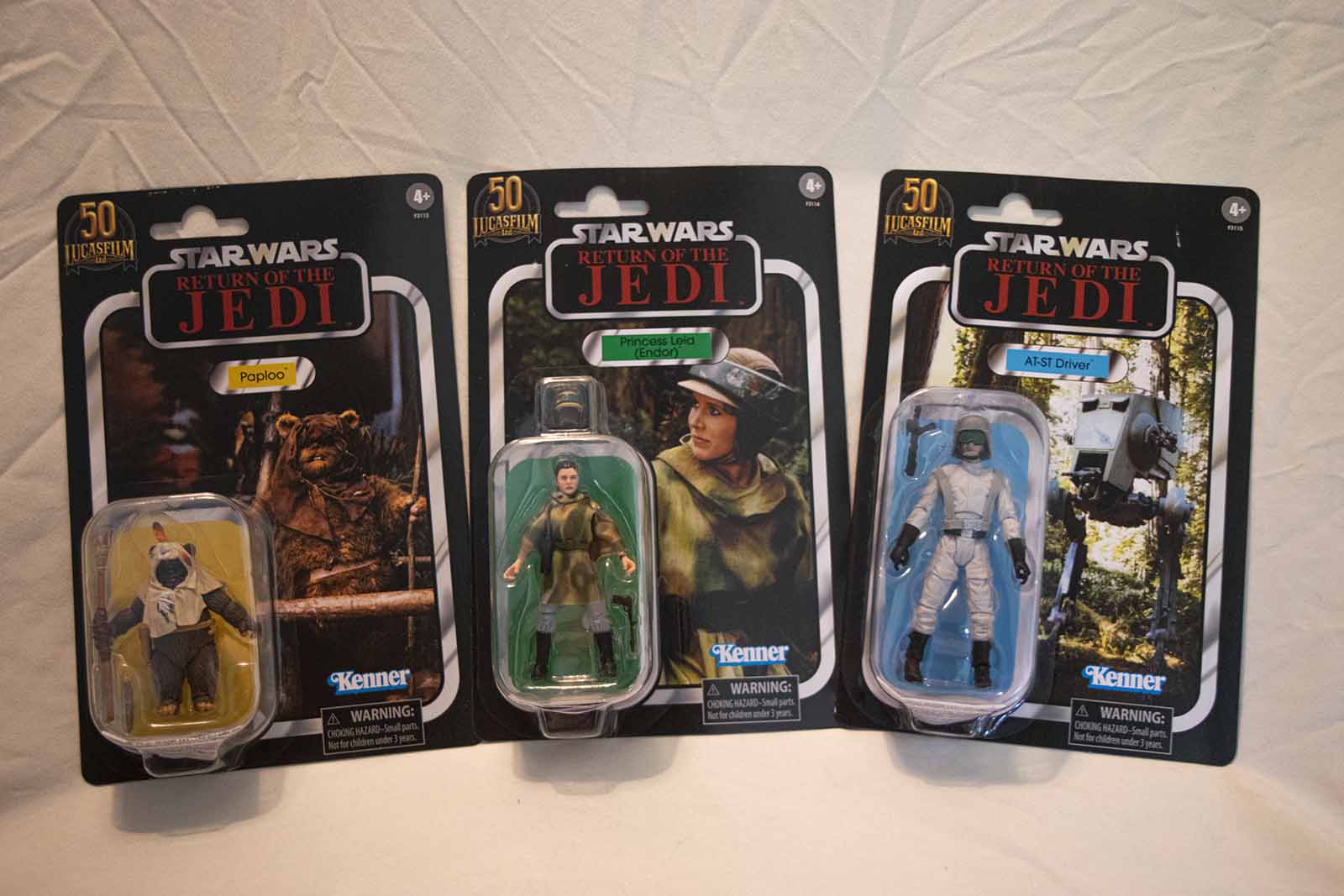 Vintage Return of the Jedi

While Return of the Jedi won’t turn fifty itself for another twelve years, that doesn’t mean Hasbro can’t bring back its figurines from back in the day. The original Kenner collection Star Wars figures cover not only Return of the Jedi, but new figures are dropping based on almost all the new movies & TV shows.

Yes, that includes the forever icon Ahsoka Tano, iconic villain Maul in his Clone Wars Style, and even Elite Squad Trooper from the latest show, The Bad Batch. If you’re more interested in the Return of the Jedi figures, there’s still plenty to love, like Princess Leia’s Endor look, or AT-ST Driver. 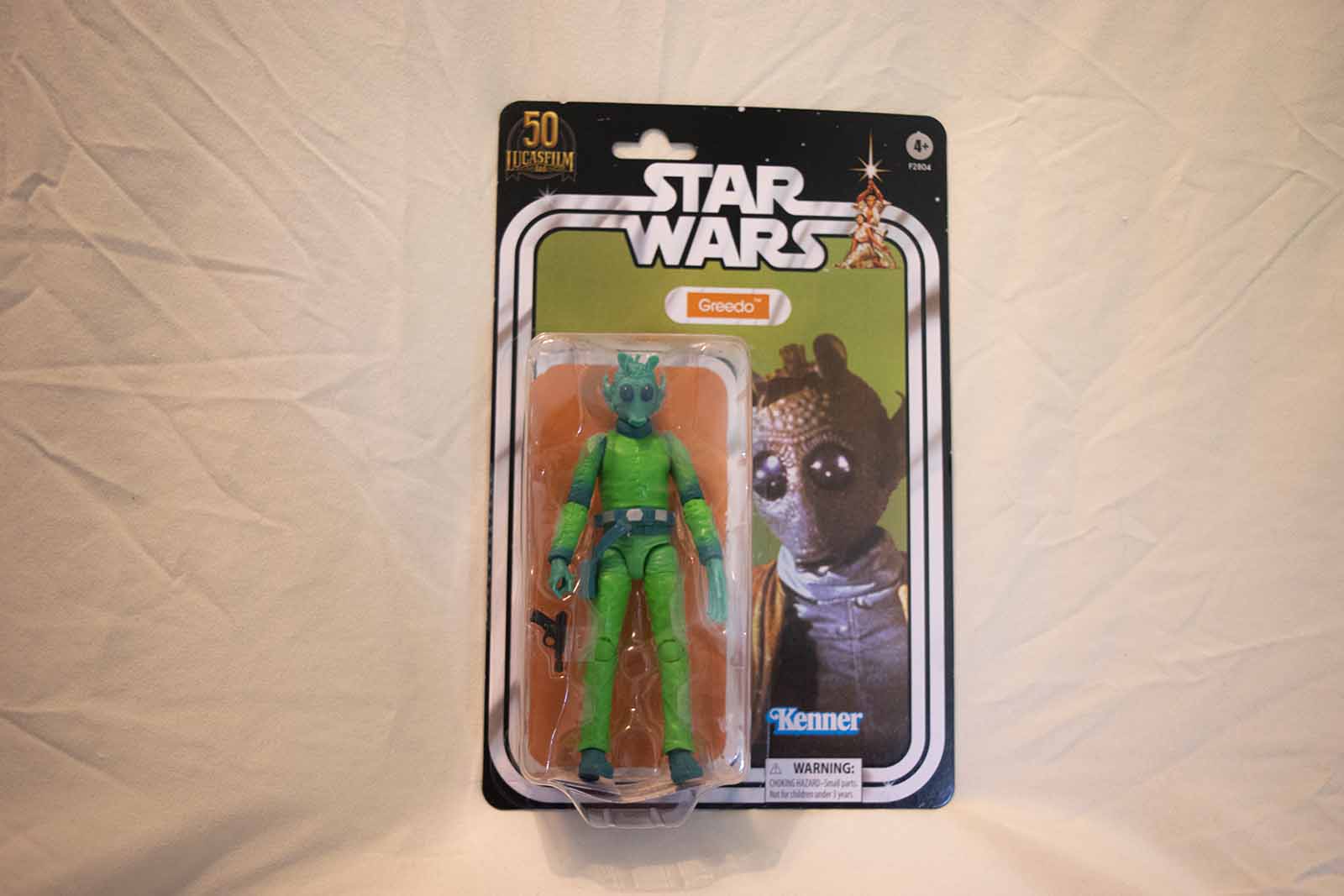 Will you make Greedo shoot first?

You cannot have a fiftieth anniversary Star Wars celebration without bringing up the forever iconic Greedo vs. Han argument from A New Hope. Truly, these new figurines cover all the iconic Star Wars movie moments. But for real, did Greedo or Han shoot first? We know Harrison Ford doesn’t care but we still do.

With his own blaster accessory, this Greedo figurine is an underrated part of the latest drop. While he is technically part of the Black Series as well, his packaging is a huge contrast compared to the other figurines. Nevertheless, he’s just as important to your collection. 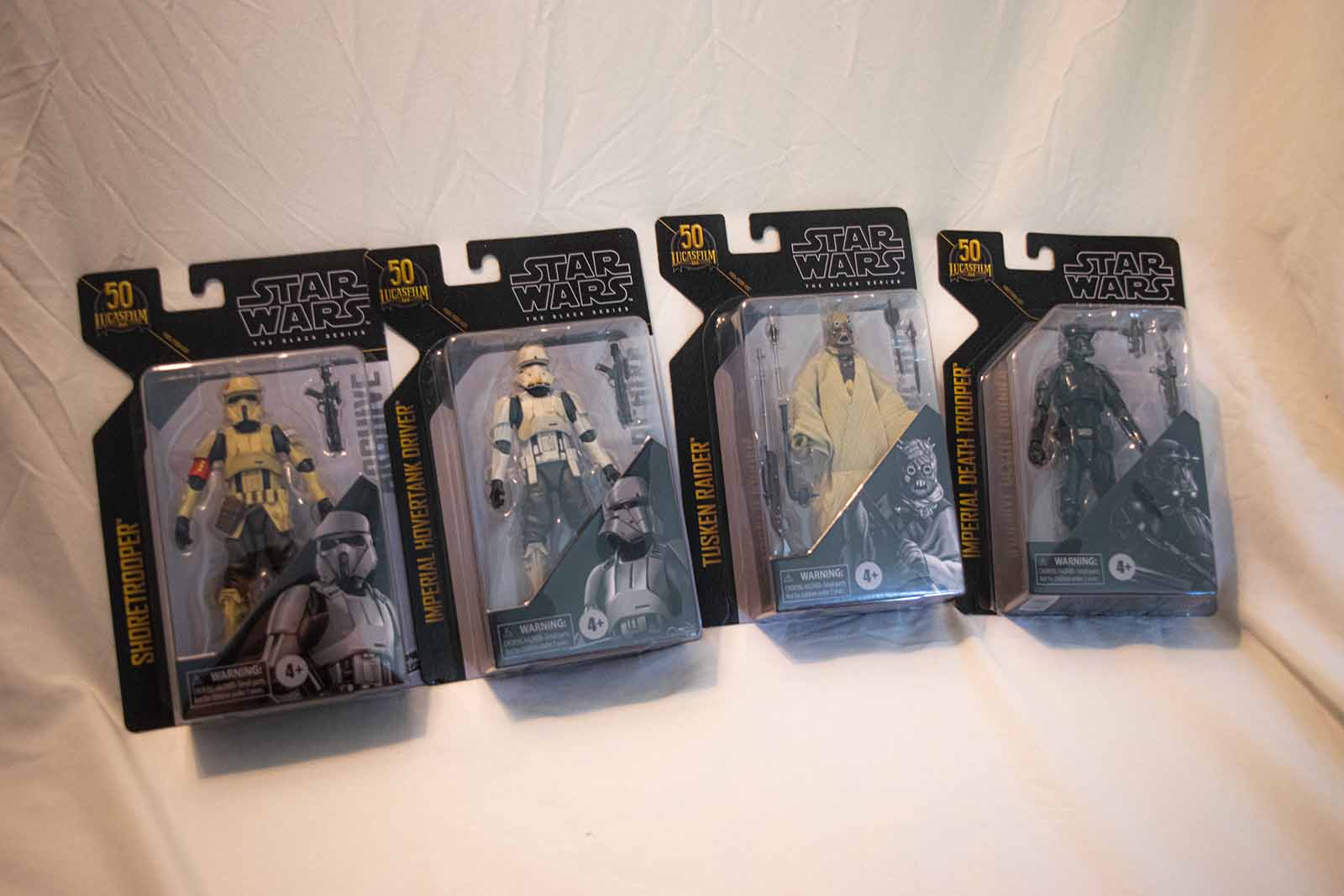 Not so disposable now

Sure, the Stormtroopers in all the Star Wars movies are as expendable as they come. They’re up there with Red Shirts in Star Trek and buildings in Avengers. But these figurines take these legendary sidekicks and give us their most iconic versions. It’s not just generic white Stormtroopers this time around.

The Shoretrooper, seen in Rogue One, the Imperial Death Trooper, most recently seen in The Mandalorian, and of course, the iconic Tuskan Raiders, all make an appearance in the Black Series. You also get your first look at an Imperial Hovertank Driver as well. With some of the most iconic side characters available for purchase, it’s the perfect way to add some extra umph to your collection. 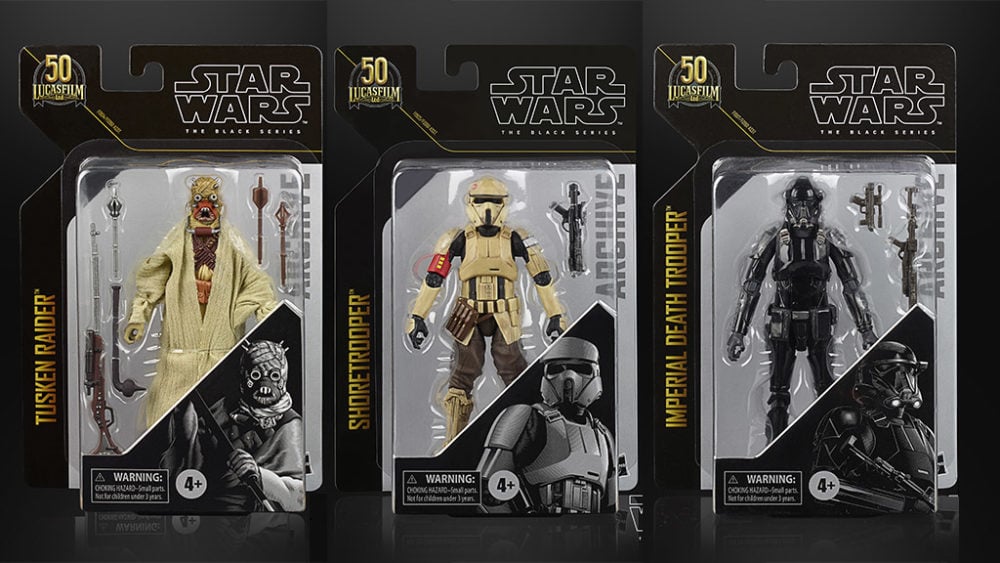 Treat yourself to an anniversary present

Between today and the end of summer 2021, Hasbro will be dropping these figurines across numerous retailers. Be quick about it when they come out, otherwise you’ll have to wait until the 100th anniversary to ever think about getting these again. Again, we have to thank Hasbro for sending us a beautiful preview of these figurines, so we can share them with you.