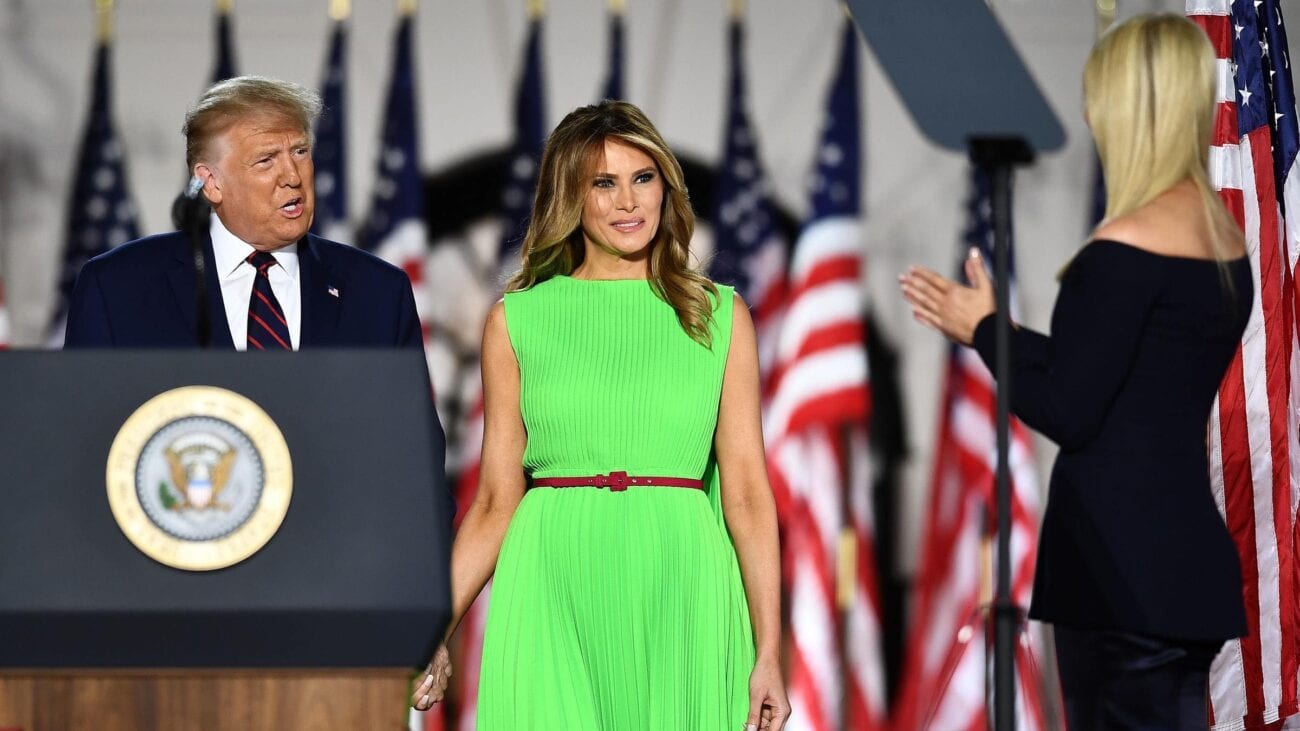 Another video of Melania Trump is circulating through media outlets and social media at a staggering pace. This time, viewers are flocking to their screens to verify whether or not Melania Trump was “glitching” – poking fun once more at her sometimes robotic demeanor.

As we  look closer at this Twitter trend, here are some of the funniest Twitter responses to that Melanie Trump video – the one you’ve probably seen everywhere by now. 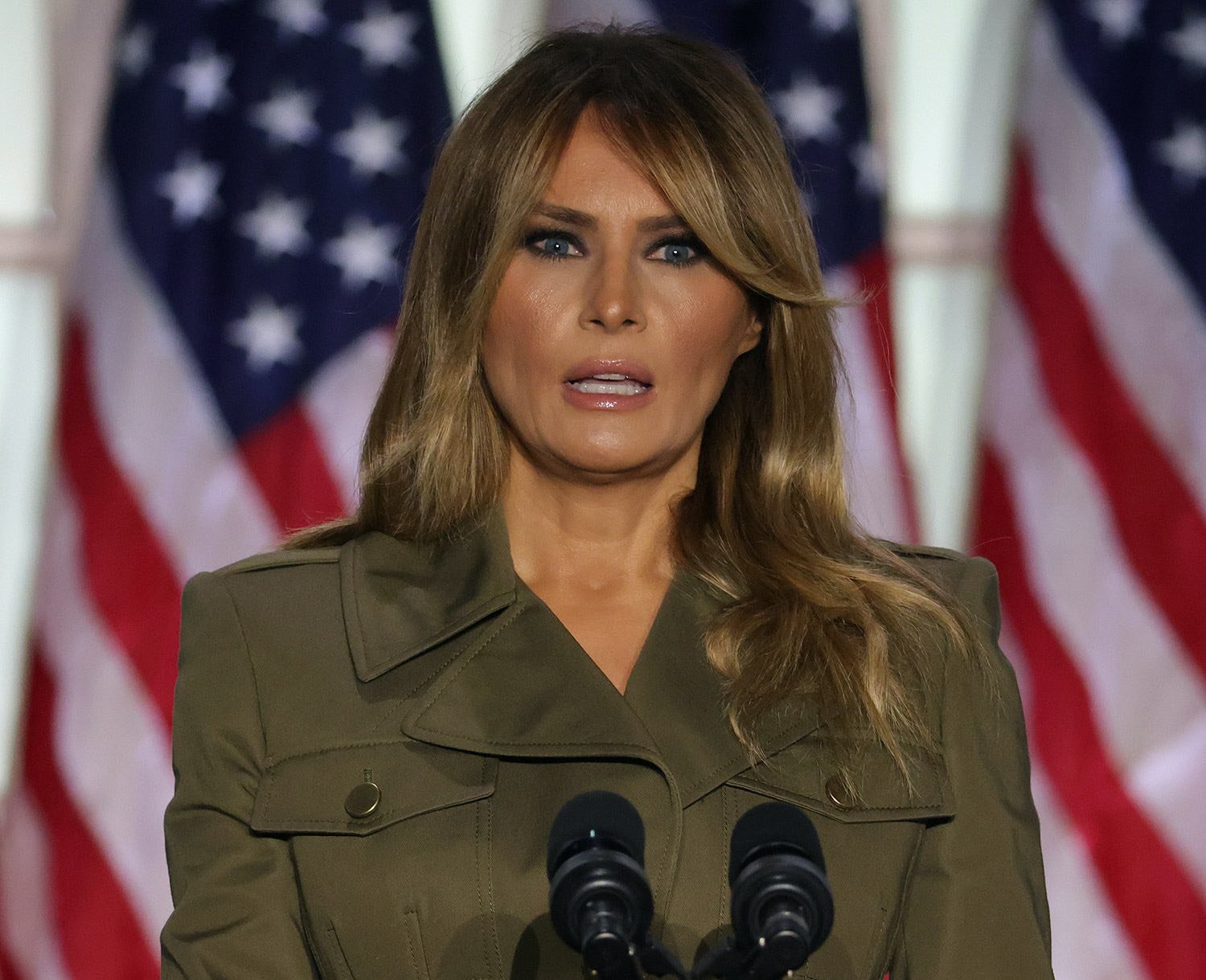 Last Thursday marked the end of the Republican National Convention and Donald Trump’s second acceptance of the presidential nomination by the Republican Party. What stole the show during the RNC wasn’t President Trump, or anything having to do with politics. Instead it was a video of First Lady Melania Trump, appearing to glitch.

From her seemingly never changing face, Melania Trump’s stint as U.S. First Lady was plagued with comical accusations of her robotic behavior. Melania’s public appearances are often overshadowed by her trademark expressions of no emotion. Appearing to have a face stuck at a squint and a half-smirk, we often ask where Melania’s mind wanders.

The same could be said during last Thursday’s final day at the RNC – specifically, following a speech made by Ivanka Trump.  Appearing in the background, Melania stands making her “Melania face” while Ivanka concludes her speech in the foreground. But the moment Ivanka leaves the podium, things take an odd turn.

Ivanka crosses the path of Melania with nothing short of precision-like speed and Melania appears stepping forward with an actual smile on her face. As though she intended to offer words of praise to Ivanka, the moment ends in the blink of an eye as Ivanka storms past. But it’s Melania’s cycle of expressions which causes “that” video.

As if realizing she’s made a grave error, Melanie’s expression changes from the hint of a smile to eyes which open as if she’s just stared into Ivanka’s soul and wants to forget the moment. Melania appears to twitch and reset to her same emotionless face as though nothing happened – all in the matter of an instant.

If you haven’t seen the video yourself, words cannot do justice to the strange moment. We wonder what images were passing through Melania’s head – or circuitry – to cause her distorted expression. It was as though someone asked Melanie a paradoxical question no human could answer, and her entire system crashed and restarted. 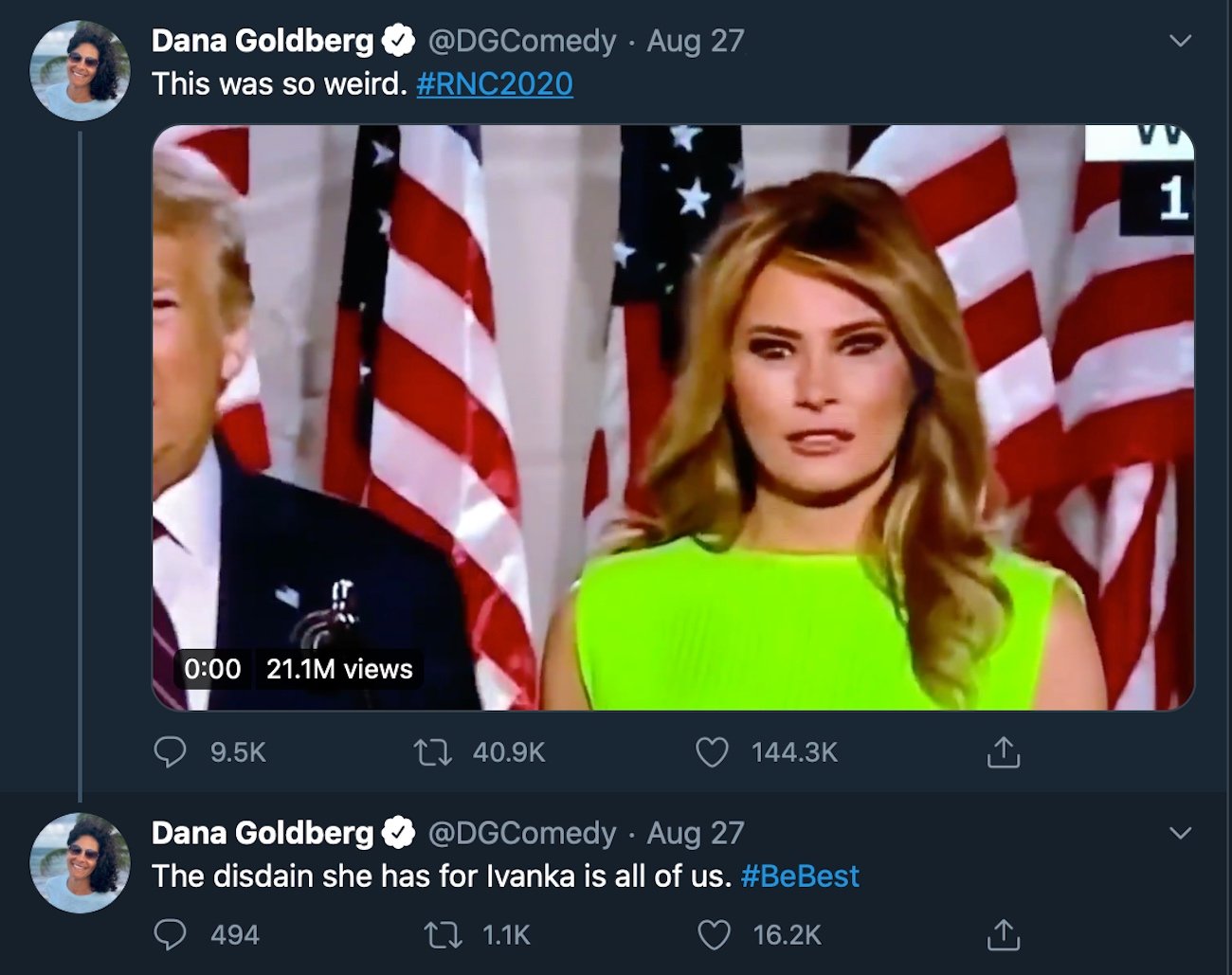 While the short clip of Melania Trump glitching circles Twitter, the only thing more comical than her expression is the wave of viewer comments. One of the first high-profile commentators was Dana Goldberg – the stand-up comedian. We couldn’t think of a better profession to provoke the thought of curious Twitter users.

Goldberg just commented, “This was so weird. #RNC2020” – a short but accurate observation at the events which transpired. As soon as they began, the wave of comments took off in hilarious fashion. It was impossible to compile all of our favorites, but below are a few standouts which kept the night’s odd events fresh in our minds. 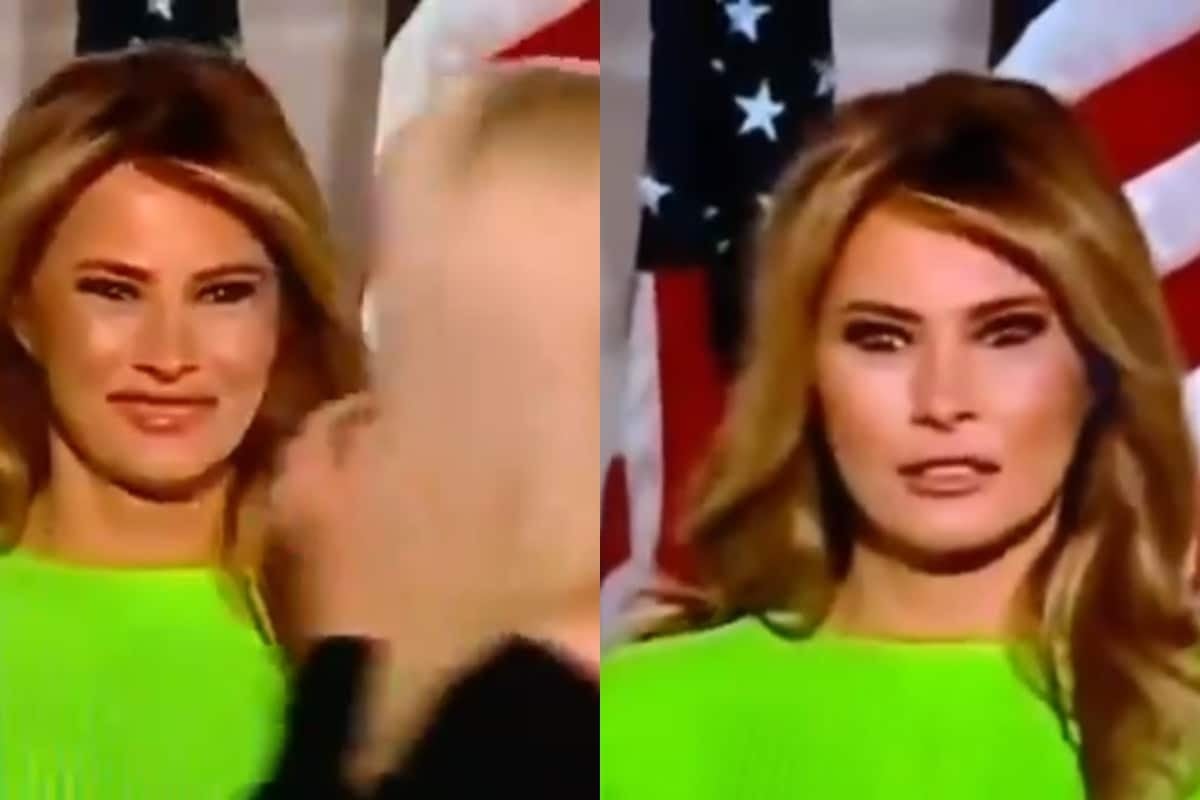 Twitter user Meena Harris (@meenaharris) commented, “Me clicking ‘leave meeting’ on Zoom” to capture Melania’s expression. Seeming stuck between two worlds, we know the exact awkward moment when the meeting actually ends and physically clicking the “Leave Meeting” option – at what moment can we take our sharing face off?

Ira Madison III (@ira) tweeted, “When the waitress coming with your drink but it’s for another table.” We too understand the immediate lapse of getting our hope up to settling back into an absent reality – it’s even worse when it happens with our food. 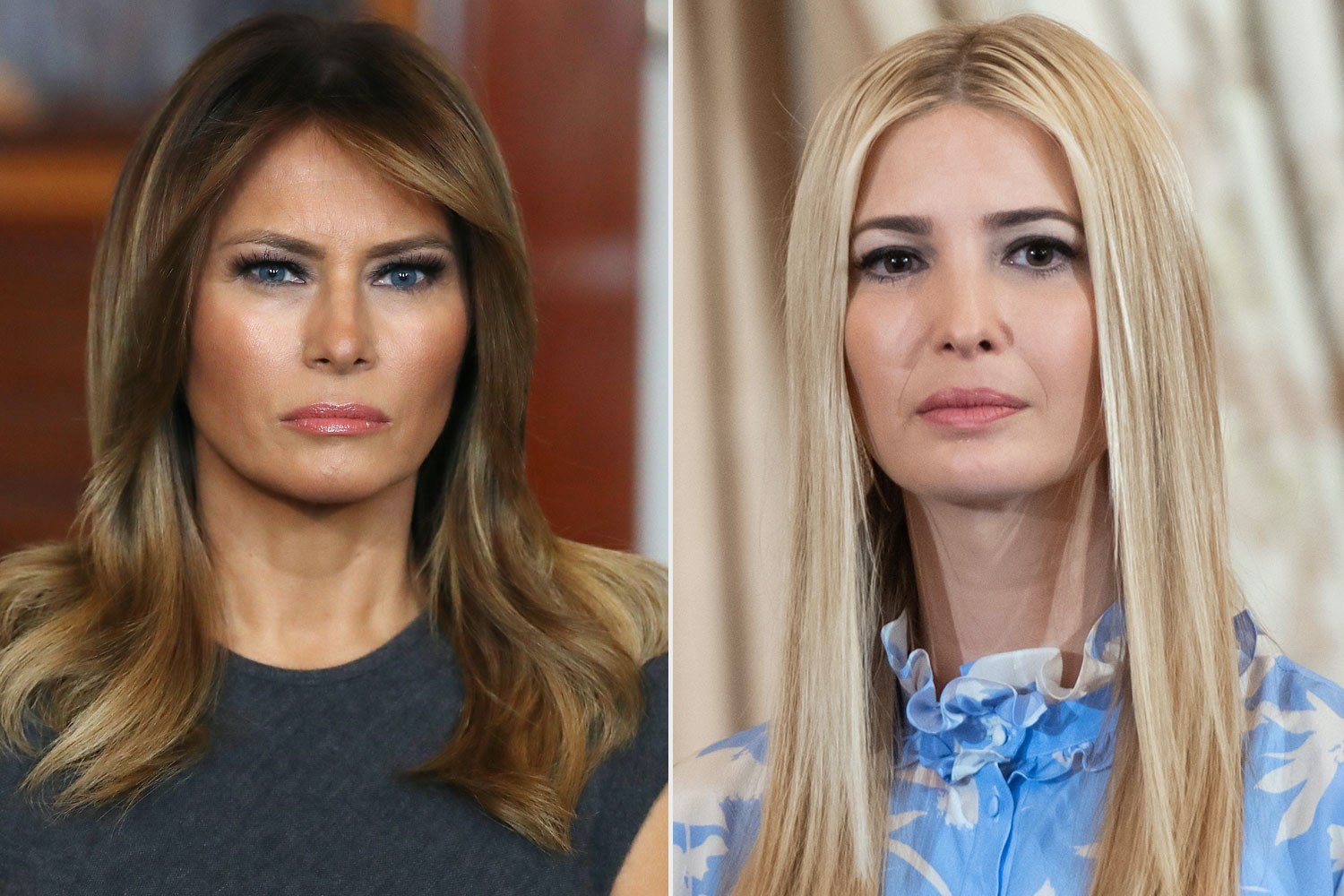 Kelsey Dickerson (@KelseyLee_D) tweeted, “What in the Stepford Wives is happening here?” The tweet in obvious reference to the 2004 film The Stepford Wives, isn’t the only one to address the appearance of animosity and exchange of false niceties between Ivanka & Melania.

Plenty of Twitter users responded with sly gifs of Melania making similar faces at the backs of President Trump and Ivanka in similar scenarios. Users made memes of the moment with Melania as everything from a Westworld animatron to a livid serpent spewing laser beams from her eyes – so far, we’re not even sure what to believe. 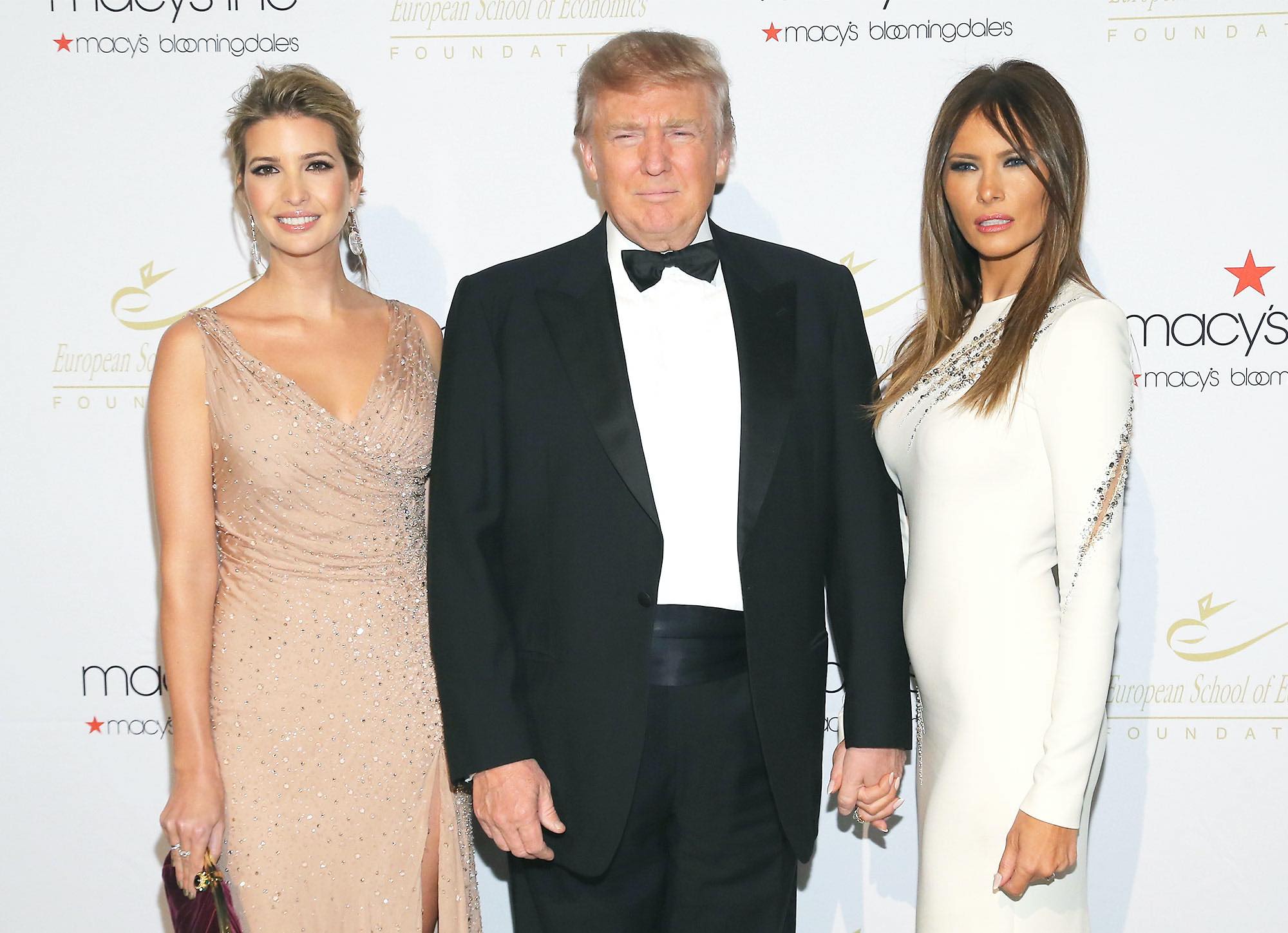 What caused the glitching of Melania Trump?

It’s no secret Melanie Trump and Ivanka haven’t been on best terms. In her latest tell-all book, Melania Trump didn’t hold back some of her scathing remarks against Ivanka. As if competition for President Trump’s attention between wife & daughter isn’t odd enough, the First Lady reportedly schemes to keep Ivanka out of their picture.

Melania Trump’s former best friend Stephanie Winston Wolkoff wrote her own tell-all novel titled Melanie & Me. Wolkoff described what she called “Operation Block Ivanka,” a scheme employed to keep Ivanka as far away from President Trump as possible during his inauguration.

If the animosity between Ivanka and Melania Trump was the cause of the latest Melania video, we can’t say for sure. All we know is that video has garnered the attention it deserves for capturing such a spectacle. Whether or not Melania was truly glitching, we’re just glad she actually can express her human – erm, we mean regular – emotions.