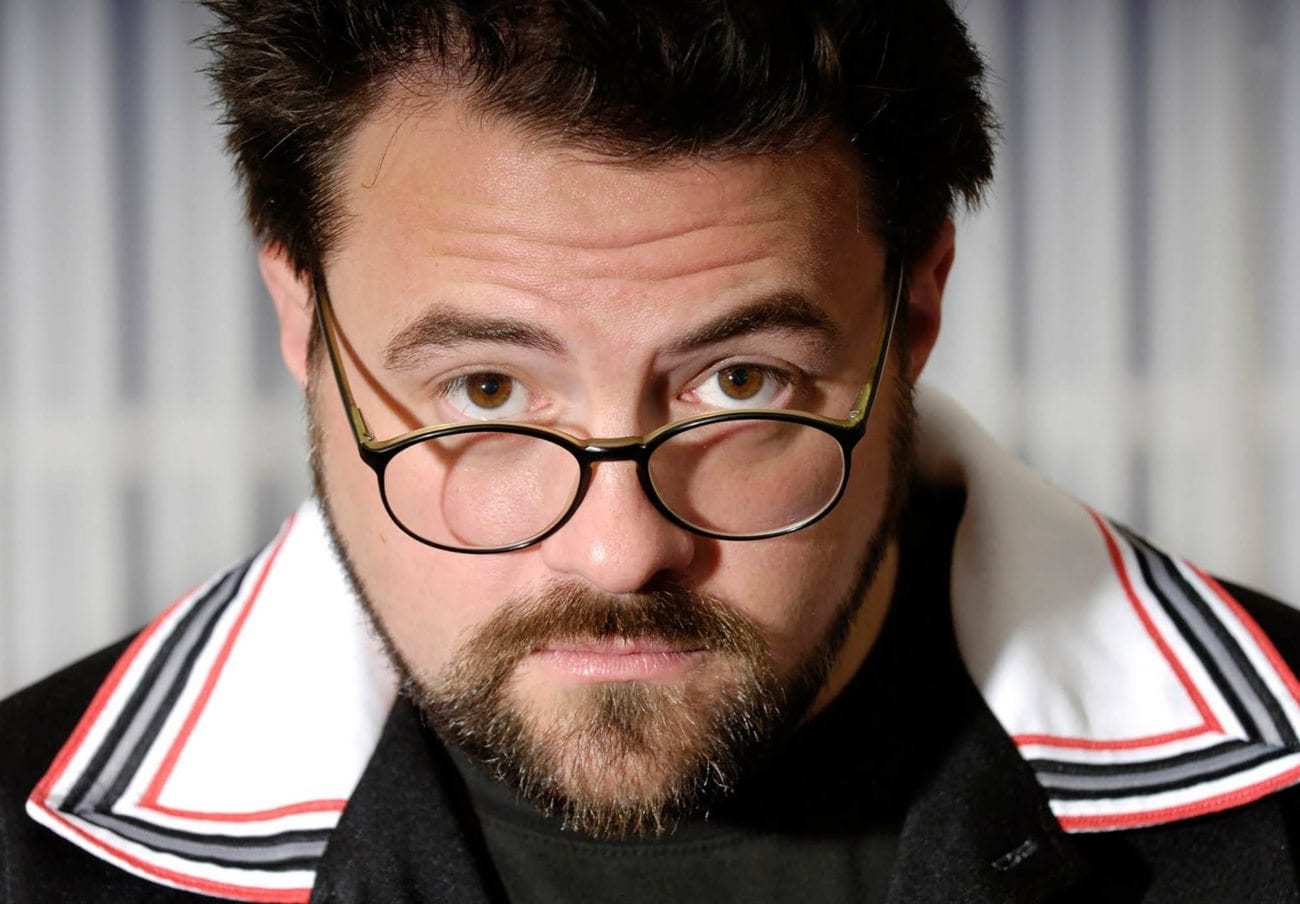 Last year Kevin Smith revealed that, following the recording of an upcoming standup special, he had suffered a “massive” heart attack caused by the blockage of his LAD artery. Set to tape two shows at the Alex Theater in Glendale, California, after finishing his 6 o’clock show he was forced to cancel the 9pm slot and rush to the hospital.

Still alive and well, the 47-year-old filmmaker tweeted the news from his hospital bed, giving props to the doctors who saved his life. Had he not left the show, Smith speculated, it was likely he’d have died.

In a career spanning three decades, the director has become known among cult-film fans for small-scale, crude comedies set within the “View Askewniverse”. It seems only appropriate that a celebration of the best moments of his life’s work is in order to show our support for Smith. 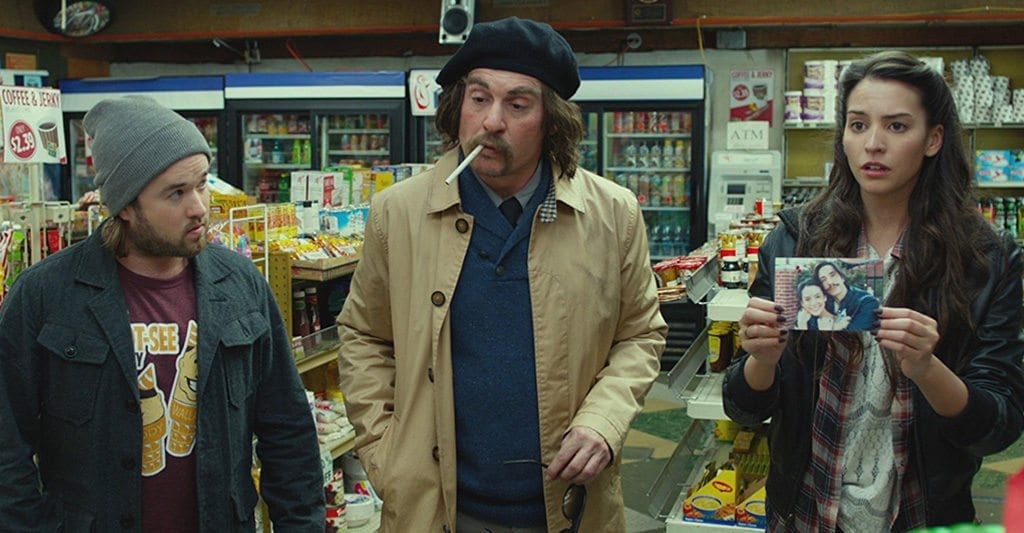 Since becoming known for bizarre performances that hide his face under layers of makeup, Johnny Depp (Sweeney Todd) has departed the realm of self-awareness and fully embraced his strange side. Once the best part of any film he was in, audiences now grit their teeth when the actor appears on screen.

Taking advantage of Depp’s self-exile into surrealism, Kevin Smith created the perfect role for him in Guy LaPointe, a drawling, chain-smoking inspector from Quebec hidden under a fake beard and ridiculous fake nose. Appearing in Tusk and Yoga Hosers, the character is the perfect outlet for the actor who lives to be weird. 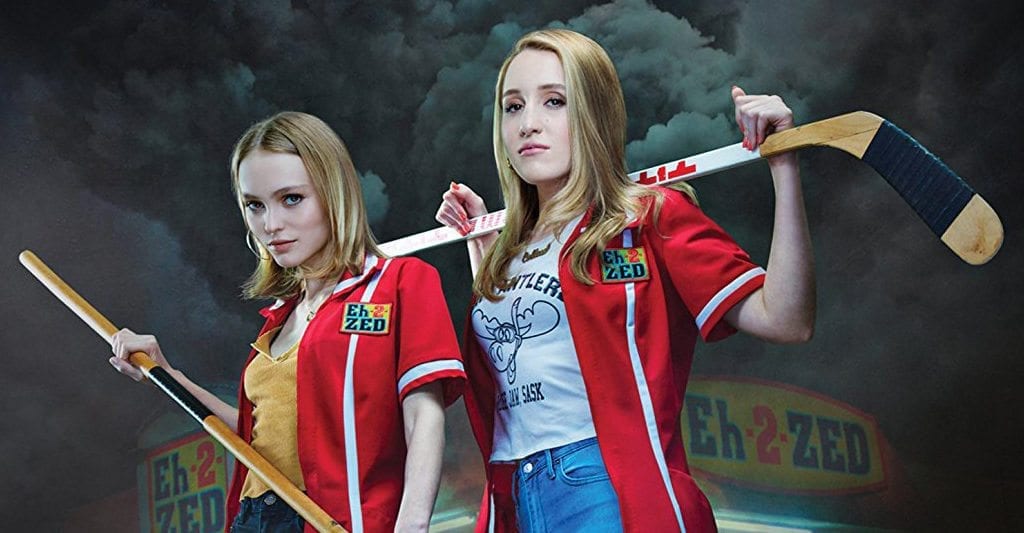 Named after the comic character of the same name as a tribute for his love of comic books, Kevin Smith loves his daughter even more than movie making and pop culture.

An actress in her own right, H.Q. Smith has appeared alongside Depp in both Tusk and Yoga Hosers, but has actually been appearing in her father’s films since the early noughties. Before small appearances in Jersey Girl and Clerks II, Harley was the adorable baby stand-in for her father’s character, Silent Bob, in Jay and Silent Bob Strike Back.

Portrayed by Kevin Smith and his close friend Jason Mewes, Jay and Silent Bob are staple characters for the View Askewniverse, appearing in almost all the director’s films. If there’s one thing they’re known for doing, it’s not much at all – they can usually be found outside New Jersey convenience stores, listening to music and selling drugs to kids.

In Clerks II, one famous scene saw Jason Mewes recreate the dance performed by Buffalo Bill in Silence of the Lambs to the song “Goodbye Horses”, a hilarious parody that ruined the film’s horror for a generation of Smith fans.

Before Justin Long underwent a terrifying surgical procedure in Smith’s Tusk, he appeared in a small role in the director’s second film not set in the View Askewniverse.

Silent Bob is most known for being, well, silent. Not a mute, Bob only speaks when he deems it appropriate, which isn’t often. He usually prefers dancing, smoking, or attempting to use the Force.

Shrugged off by Jay, Silent Bob’s speech to Ben Affleck (Justice League) is a shocking moment of extended dialogue for the character, and also demonstrates Smith’s surprising range as a performer, who previously only cast himself in his films for a bit of fun. Bob’s musings on love, sexuality, and heartbreak are a poignant remark on modern masculinity and one of the film’s best moments. 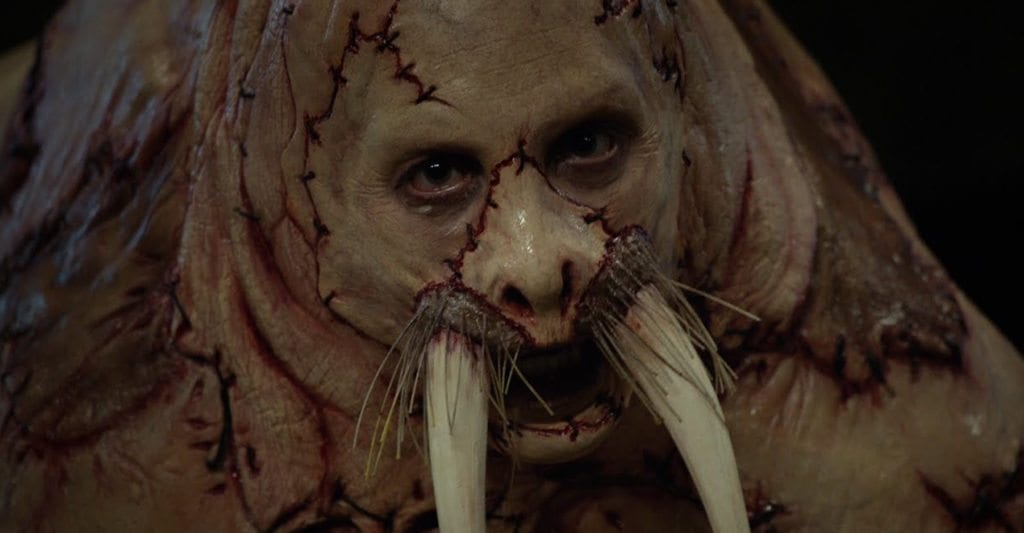 Aside from filmmaking, Smith is best known for his extensive podcasting experience. His ramblings with producer Scott Mosier on his weekly SModcast are known for its lighthearted take on current events and frequent tangents. During one infamous episode, the pair discussed a bizarre Gumtree ad promising a free living situation on the condition the tenant dress as a walrus the entire time.

The discussion led to Smith proposing a horror film based around this scenario, and a Twitter poll in which his fans were asked to tweet “#WalrusYes” if they wanted the film to be made. The answer was a resounding yes, and we’re so very glad.

For Kevin Smith’s fourth film, he decided to take on religion. Featuring his second collaboration with Ben Affleck, Dogma follows two fallen angels, played by Affleck and Matt Damon (The Martian), who try to get back to heaven.

One of its most memorable satirizations of Catholicism features the late, great comedian George Carlin as a cardinal who thinks the Catholic Church has a bad reputation for being “wholly depressing”, noting the crucifix as a particularly sordid emblem. He then unveils “Buddy Christ”, a smiling, winking statue of Jesus intended to become the new symbol for the Church. Instead, it became an instantly recognizable online sensation. 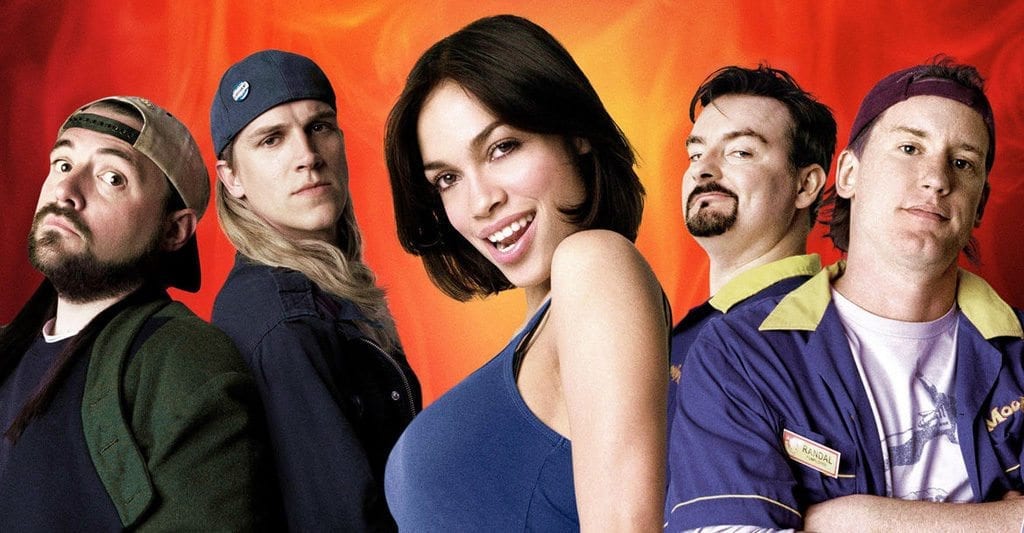 Kevin Smith’s films are often hailed for their understanding of the minutiae of everyday life and the oddities & discussions entailed in it. In Clerks II, Smith tries his hand at presenting an argument that nearly every film and pop culture fan has experienced at some point in their lives: which trilogy is best?

Randal’s “simplistic analysis” of the acclaimed Middle Earth series as consisting entirely of walking might be off-base, but it’s infuriatingly familiar and accurate to any Lord of the Rings fan who has tried to debate a Star Wars supremacist. 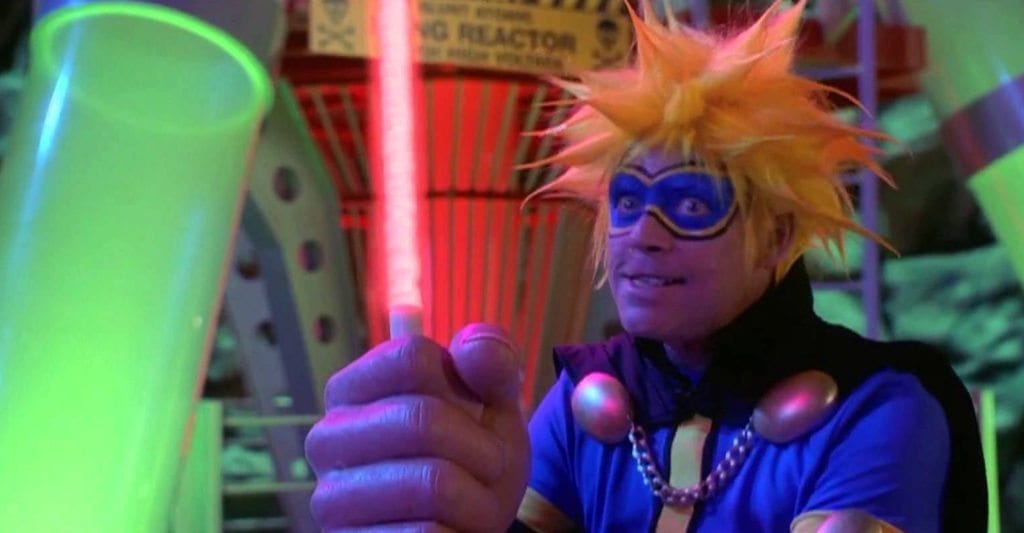 The culmination of the View Askewniverse, Jay and Silent Bob Strike Back was intended as the last appearance of the iconic duo before they were resurrected in Clerks II. Featuring an ensemble cast of many actors seen in Smith’s previous four films, the film thrusts the pairing into the superhero roles of Bluntman and Chronic after they discover the comic book based on their likeness.

After sneaking onto the set, battle commences, featuring Mark Hamill (Star Wars: The Last Jedi) as goofy supervillain Cocknocker. Following his Star Wars years, Hamill became known for villainous appearances as The Joker and The Trickster, and it was a joy to see him work his devilish magic once again. 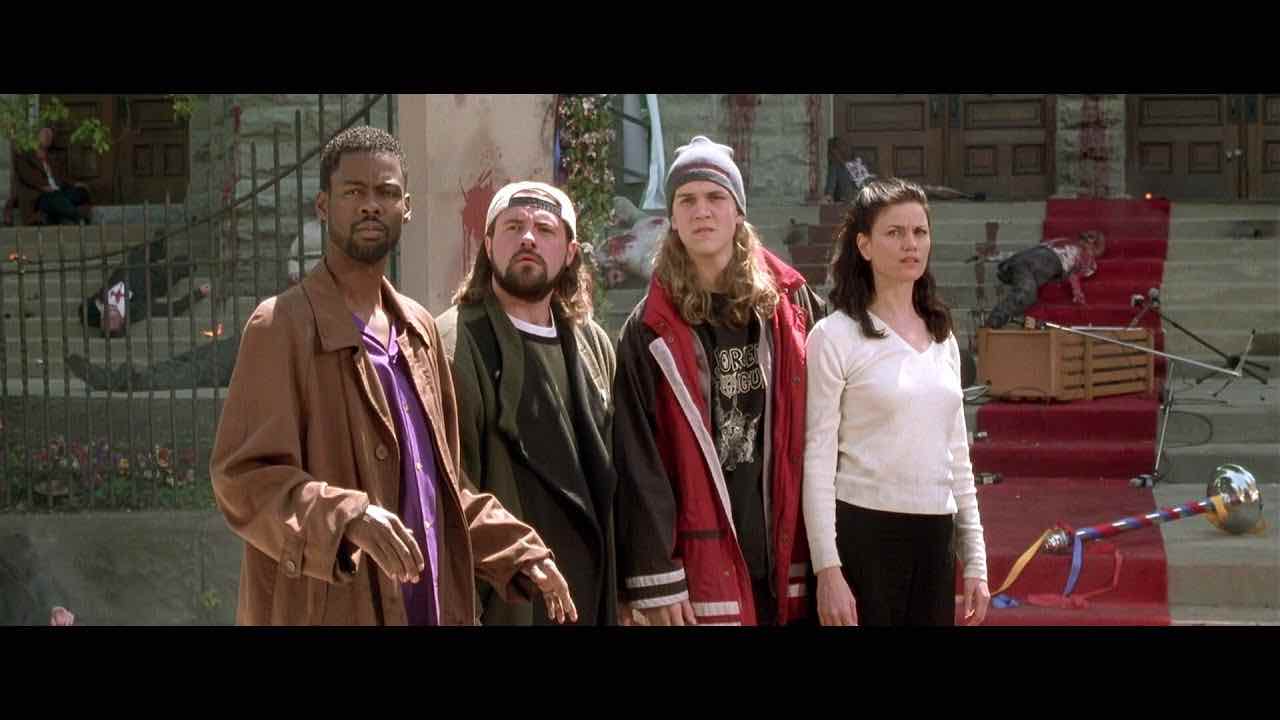 One of Smith’s best moments of movie magic actually occured behind the scenes, after the film was completed. Following the tradition of Monty Python’s Life of Brian and others like it, any comedy making light of Christianity is bound to foster controversy and vitriol, though Smith just found it funny.

Deciding to picket his own film, Smith joined the protesters with his own makeshift sign and was eventually picked on by a New Jersey news crew for looking “suspiciously like Kevin Smith”. He wouldn’t admit it was him, and simply stated that he wasn’t sure what the film stood for, he just knew it wasn’t good.