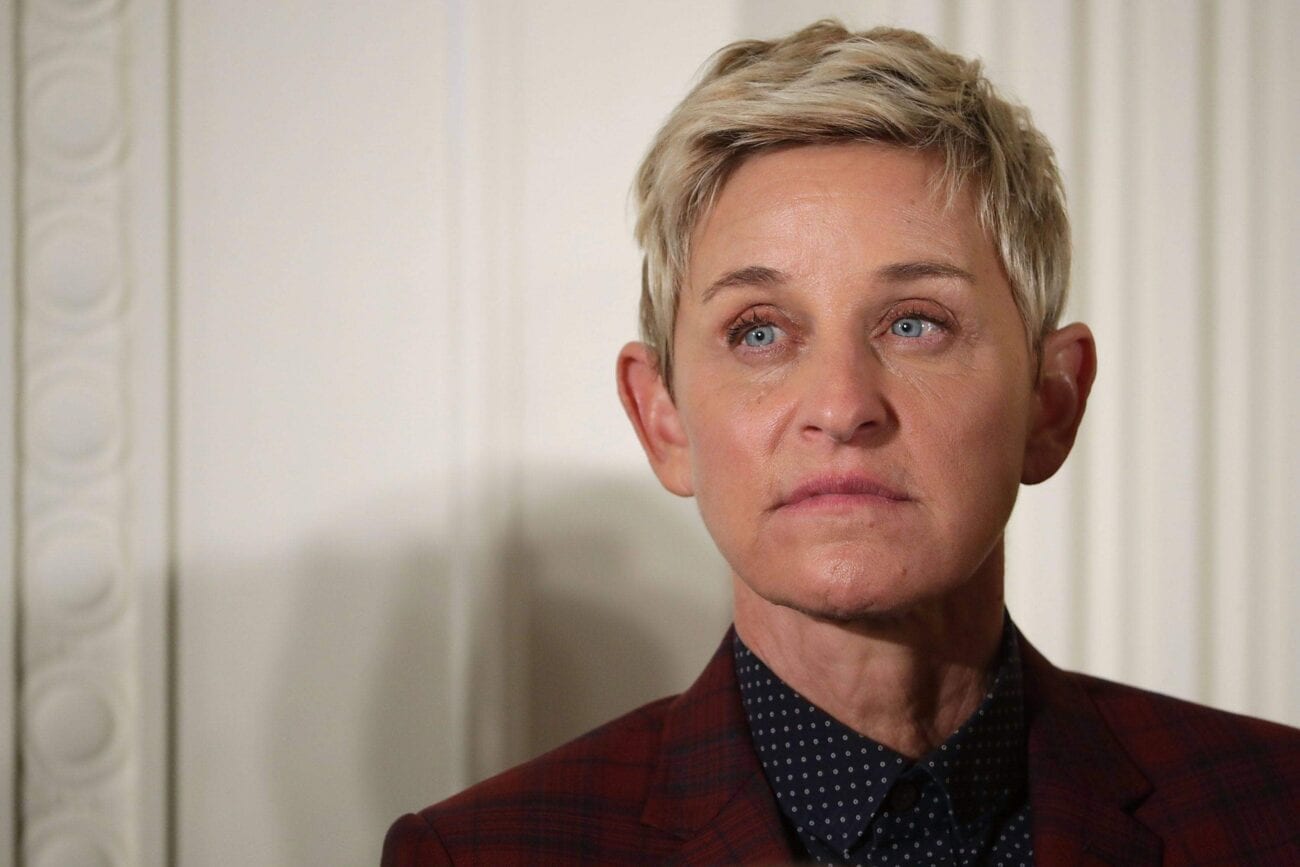 All the worst things Ellen DeGeneres has ever said on Twitter

Celebrities are often subjects of scrutiny for anything and everything sent out by their social media accounts. They put their reputations on the line for taking a stance or saying something unpopular. Some celebrities play the Twitter game well, while others need to take more time thinking about what they send into the digital world.

This perhaps applies to few people as notable as Ellen DeGeneres, whose allegations of “mean” behavior have had fans pointing to her Twitter to remind us it’s really nothing new. Take a look at all the worst things Ellen has said on Twitter. 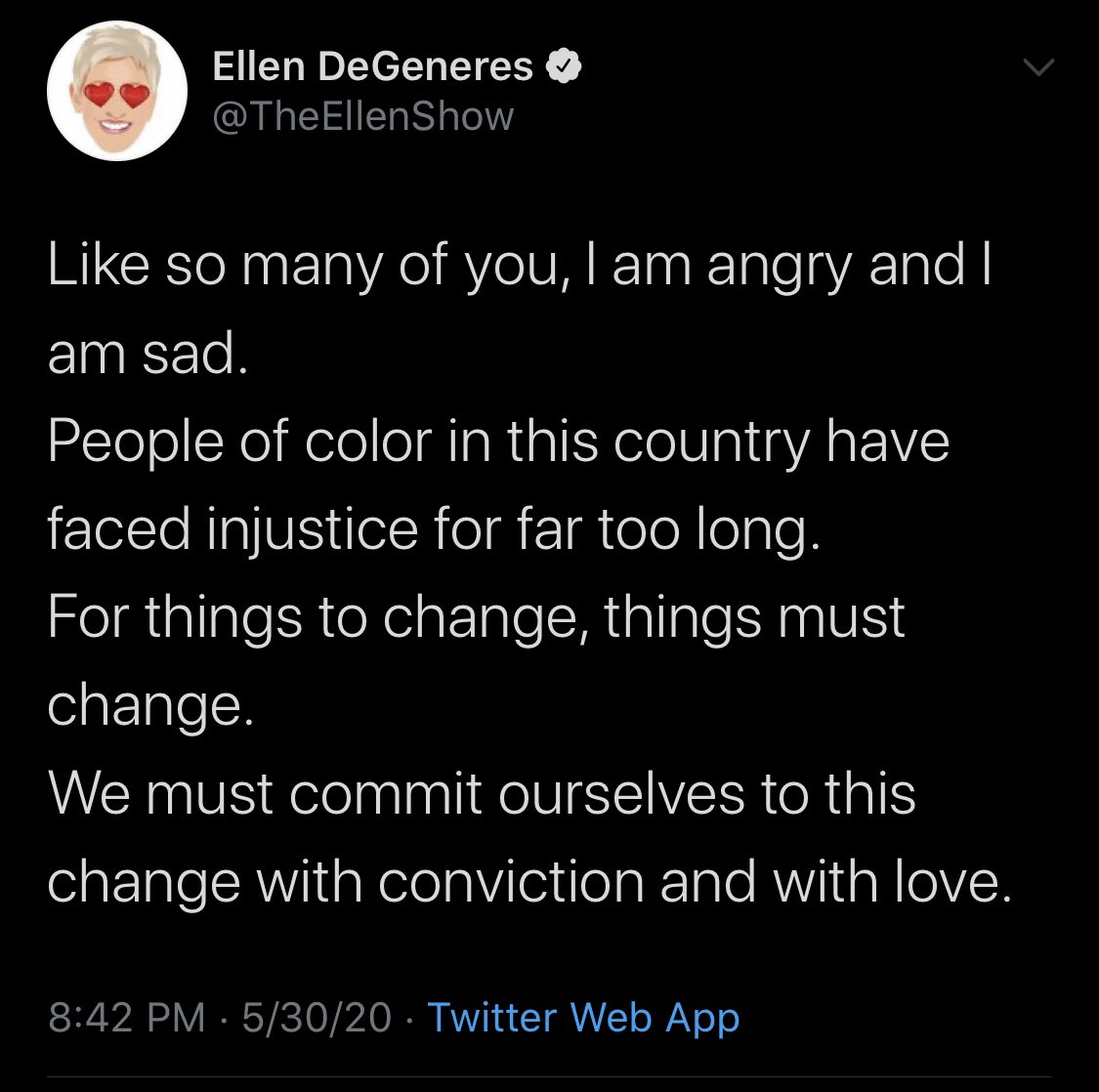 Nearing the end of May, Ellen DeGeneres seemed to be showing support for the protests against police violence and called for “change” to be brought about with “conviction and love” in one of her most recent tweets.

Despite Ellen’s best intentions, her now-deleted tweet received immediate lashback and criticism for several aspects of the wording. Some fans were quick to call out Ellen’s blanket-statement on “people of color,” instead of taking a deliberate stance with the BLM movement and black community – those leading the charge for reforms. 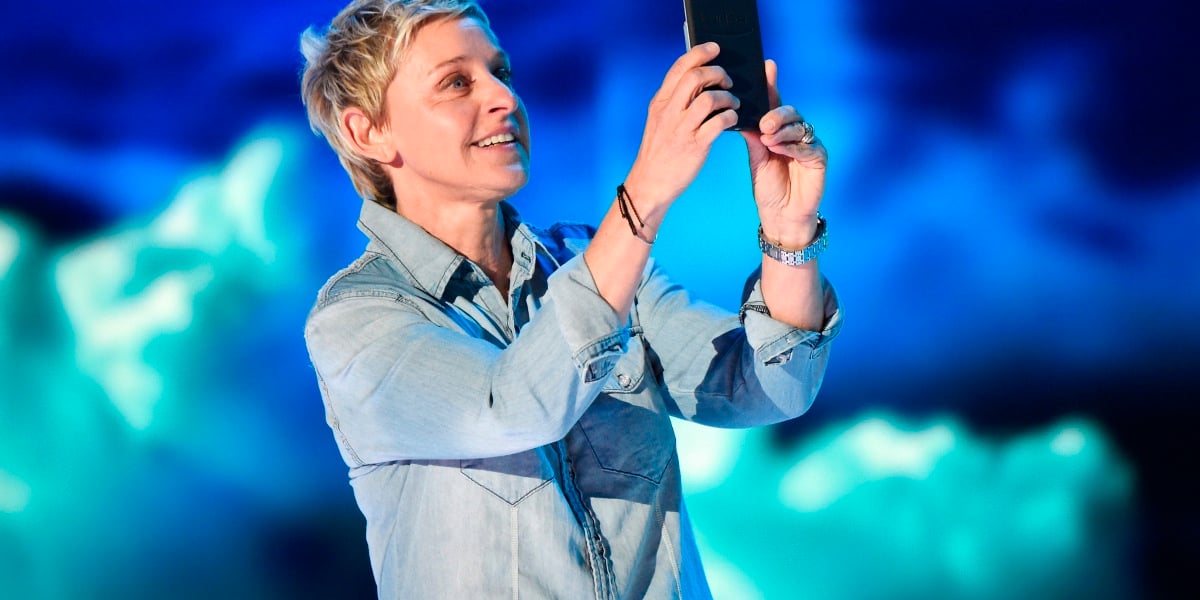 Others were also critical of her vague statement on change: “For things to change, things must change.” It’s no secret what “things” are being called the change, and by not providing a firm stance, it appeared to some that Ellen was playing the hesitant, middle-ground.

Twitter users wanted to hear about concrete action by DeGeneres – they wanted to know how the multi-millionaire was supporting visible change. After deleting the tweet, Ellen came back with a follow-up, having declared, “I was the dancing lady for a little while and now I want to help educate my audience. I want to educate myself.” 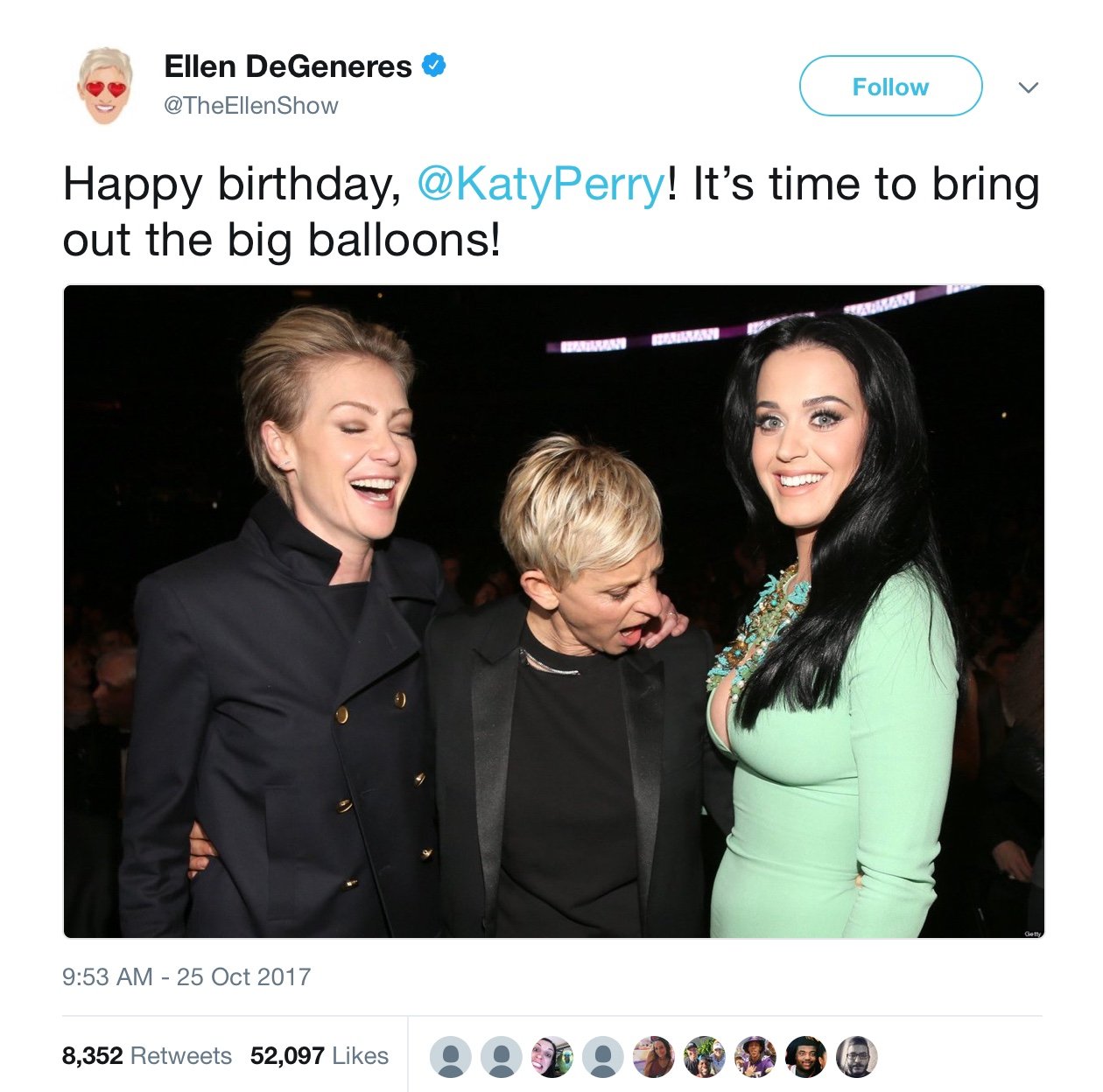 In 2017 DeGeneres faced backlash after she sent a “happy birthday” tweet to Katy Perry. The tweet concluded with, “It’s time to bring out the big balloons” and captioned a picture of Ellen staring at Perry’s breasts.

Several were to the defense of Ellen, arguing that her and Perry are good friends, and the entire innuendo was harmless wordplay. Others criticised the post, calling it a double-standard that Ellen can publicly stare another’s breasts in public for sake of comedy, especially in light of the sexual harassment scandals of the time. 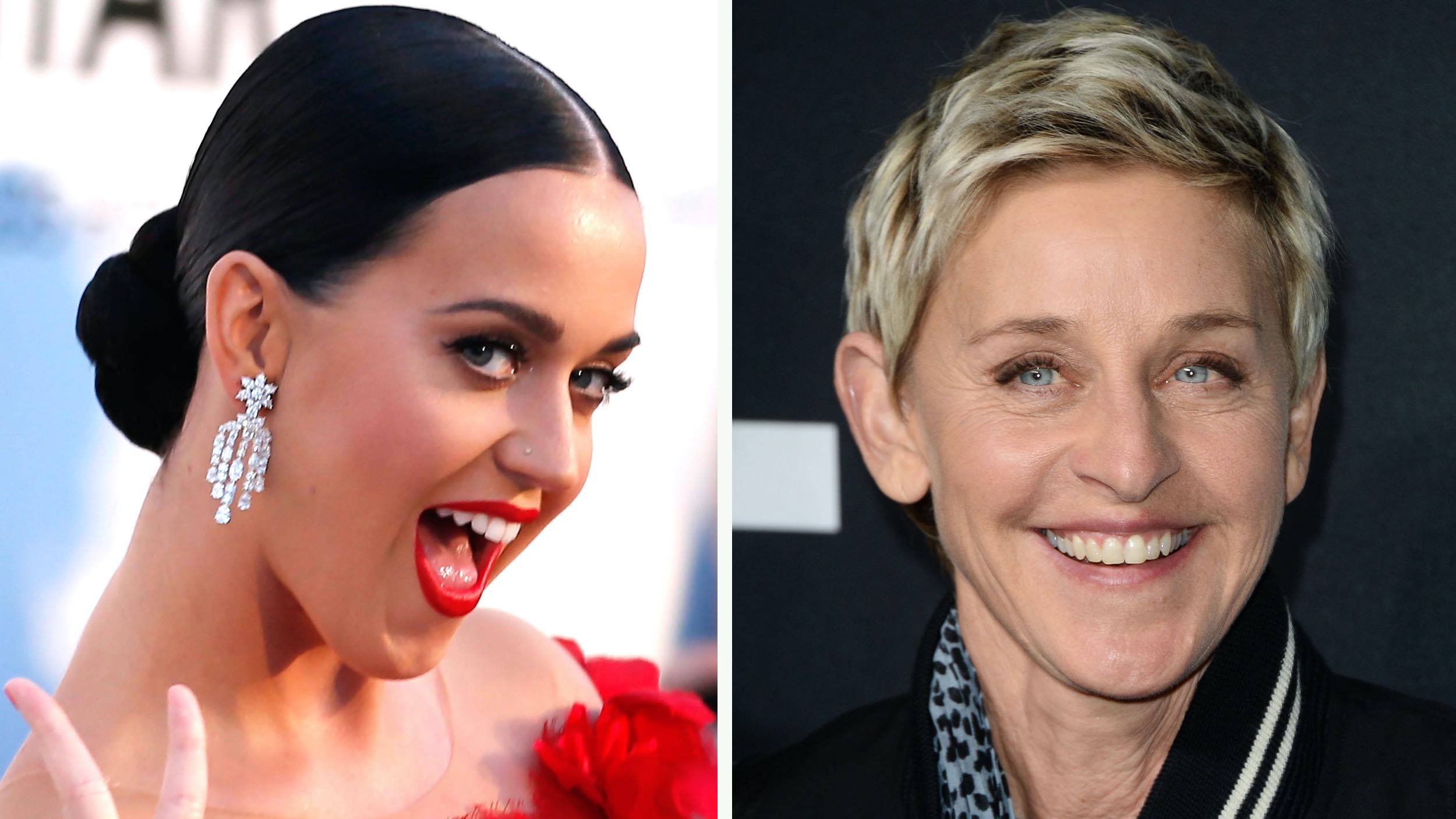 Some twitter users went so far as to spread the hashtag “Ellen Weinstein,” after the large Harvey Weinstein scandal taking place in Hollywood.

In her own words, Ellen once declared sexual harassment “is not a male thing or a female thing, it is not a Hollywood or political thing, this is a human thing.” It’s easy to see how some viewed her tweet as blatant hypocrisy. For the future, if you’re going to send inappropriate things – even to friends – maybe just keep it private? 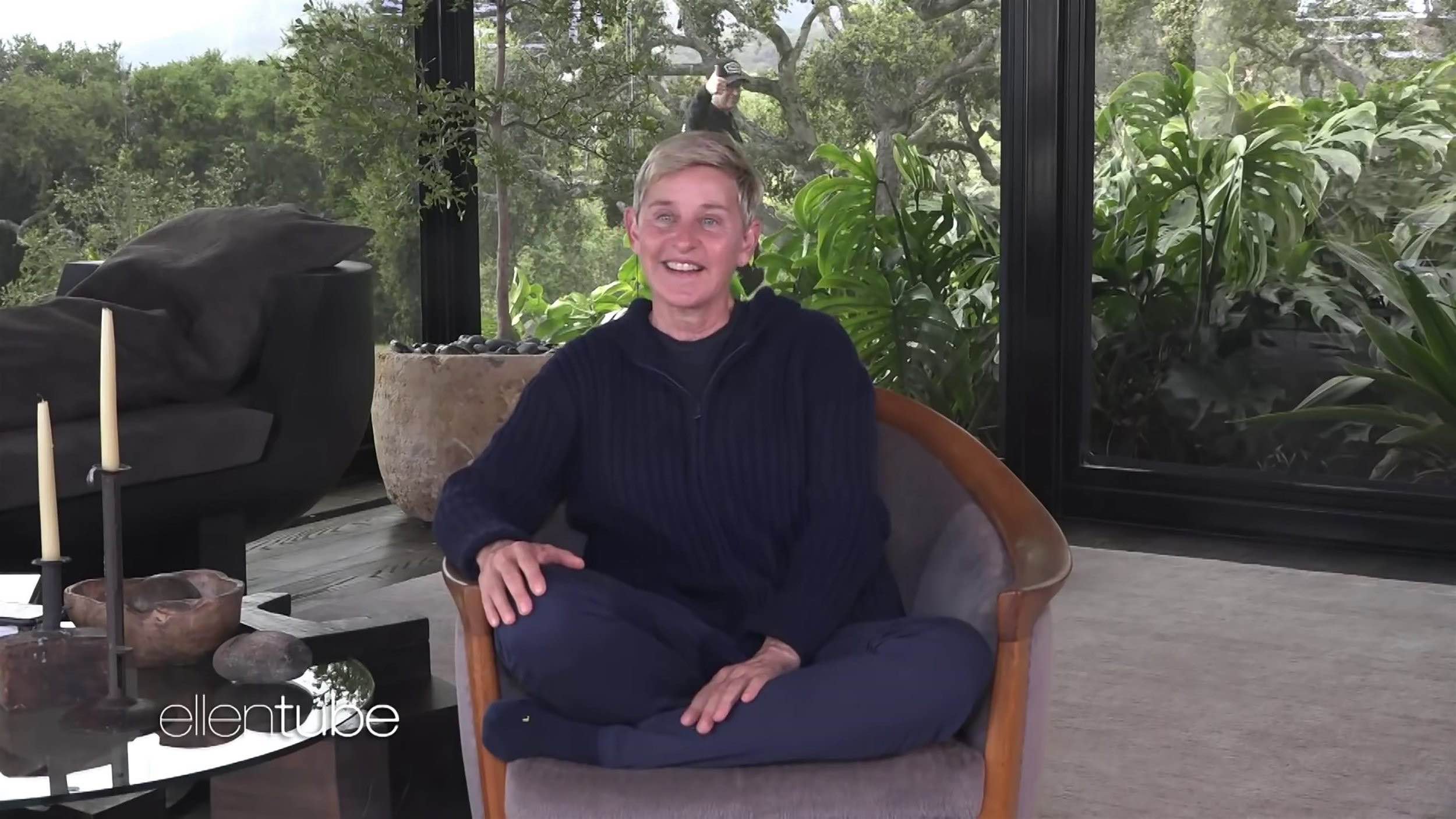 DeGeneres’s home is a “jail”

When The Ellen DeGeneres Show returned in the “new-normal” talk show format, Ellen took to Twitter, filming from the inside of her multi-million dollar mansion in California. The host decided to film from her spacious living room – and opened with one of the worst comments she made in recent months.

In her show’s opening, Ellen tries to make a joke she would immediately regret. Ellen delivered a tongue-in-cheek complaint to her viewers: “This is like being in jail. Mostly because I’ve been wearing the same clothes for 10 days and everyone in here is gay.” 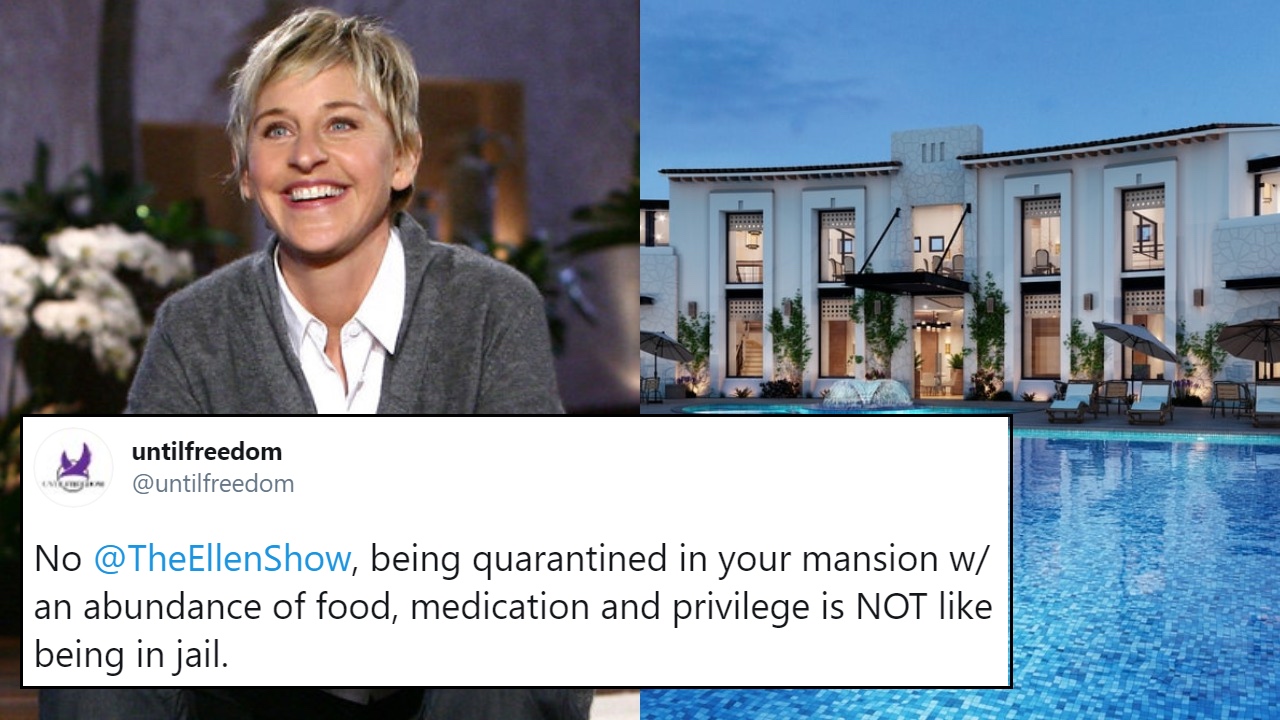 Rightful backlash followed, when Twitter users decried Ellen’s decision to compare her luxurious home to the conditions in jails – especially as so many prisons have been criticized for not meeting the safety standards for their inmates during this pandemic.

Others reminded Ellen that nothing she is going through could be considered reminiscent of life in a jail or prison. We’re all anxious because of our boredom during quarantine, but we don’t all have a guest house, several pools, and a beautiful estate. Once again the public quelled Ellen’s poor attempt at humor with a dose of reality for the detached host. 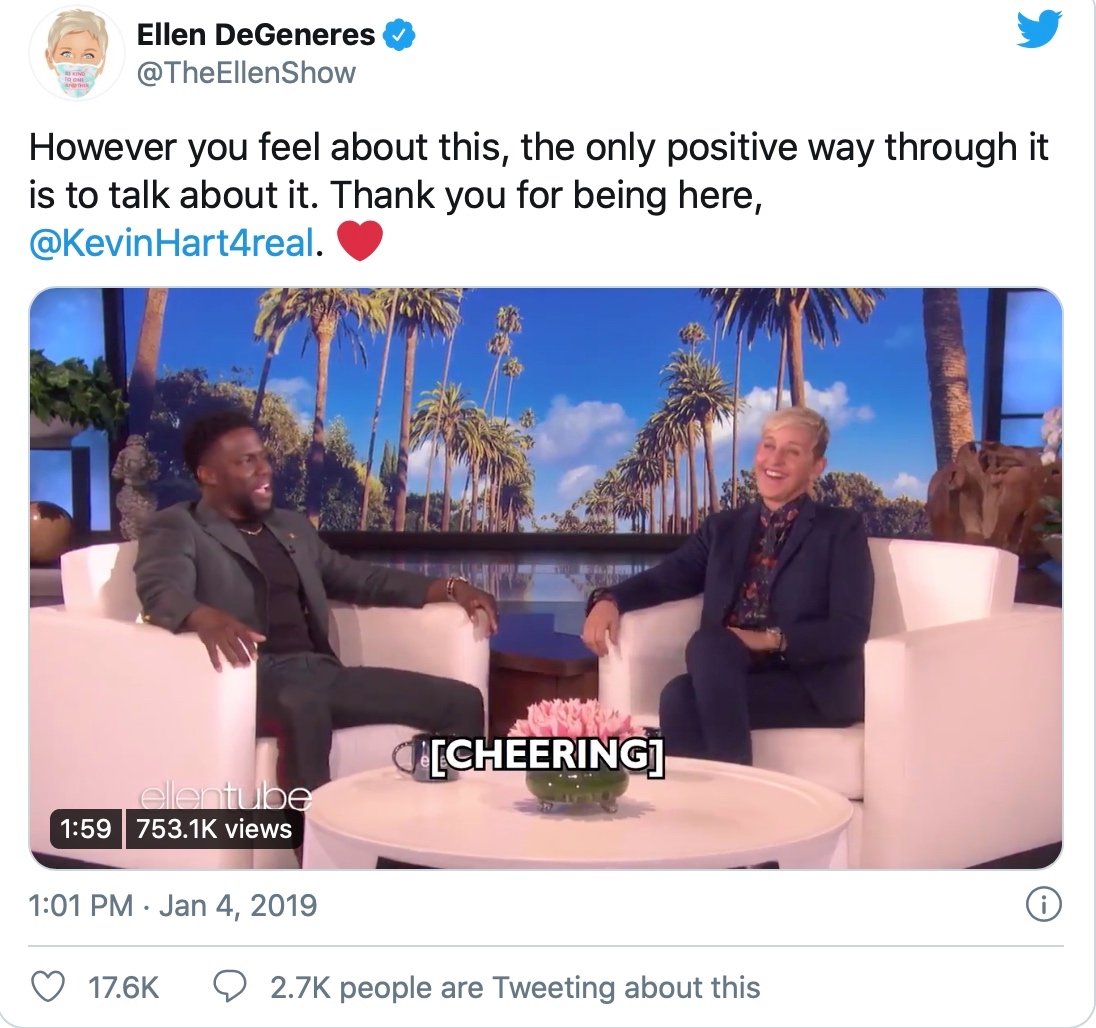 In 2019 Kevin Hart receive immense backlash from vocal members of the LGBTQ community who made note of not only his several jokes, but surfaced tweets and comments that were deemed intolerant and homophobic. As a result, the pressure Hart faced made him step down as the host of the Oscars.

DeGeneres had Hart on her talk show and defended him by having a dialogue, acknowledging his apologies and telling him to ignore the “trolls” and “haters” that were a part of the “small group of people being very, very loud.” 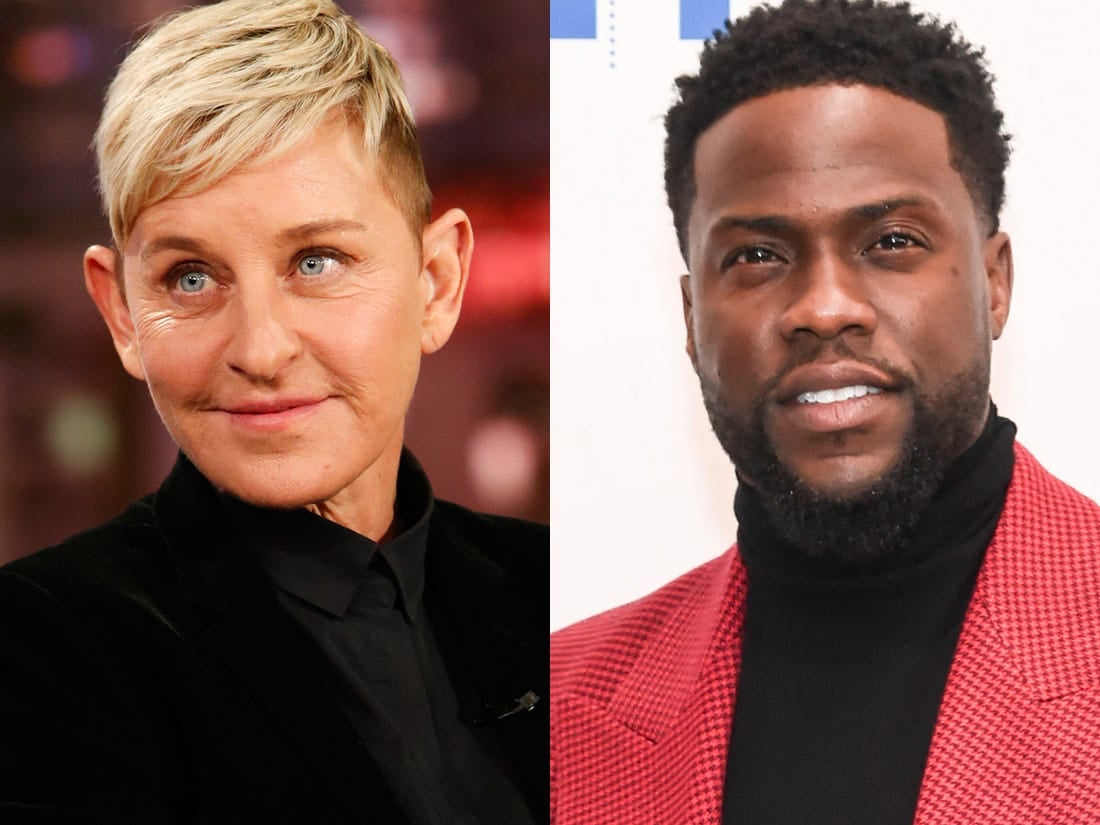 Ellen followed the show with a tweet that read, “However you feel about this, the only positive way through it is to talk about it. Thank you for being here, @KevinHart4real.” Fans were quick to form a rebuttal, accusing Ellen – a strong advocate for LGBTQ rights – of speaking for everyone in a community that felt hurt and targeted by Hart’s words.

Twitter users also targeted Ellen for not having a more balanced dialogue, and not hosting a guest to represent a member with an opposite point of view. DeGeneres tackled a serious issue in a way that seemed –to some – just another patronizing act of publicity. We think Ellen needs a reminder that her decisions have real effects for her listeners. 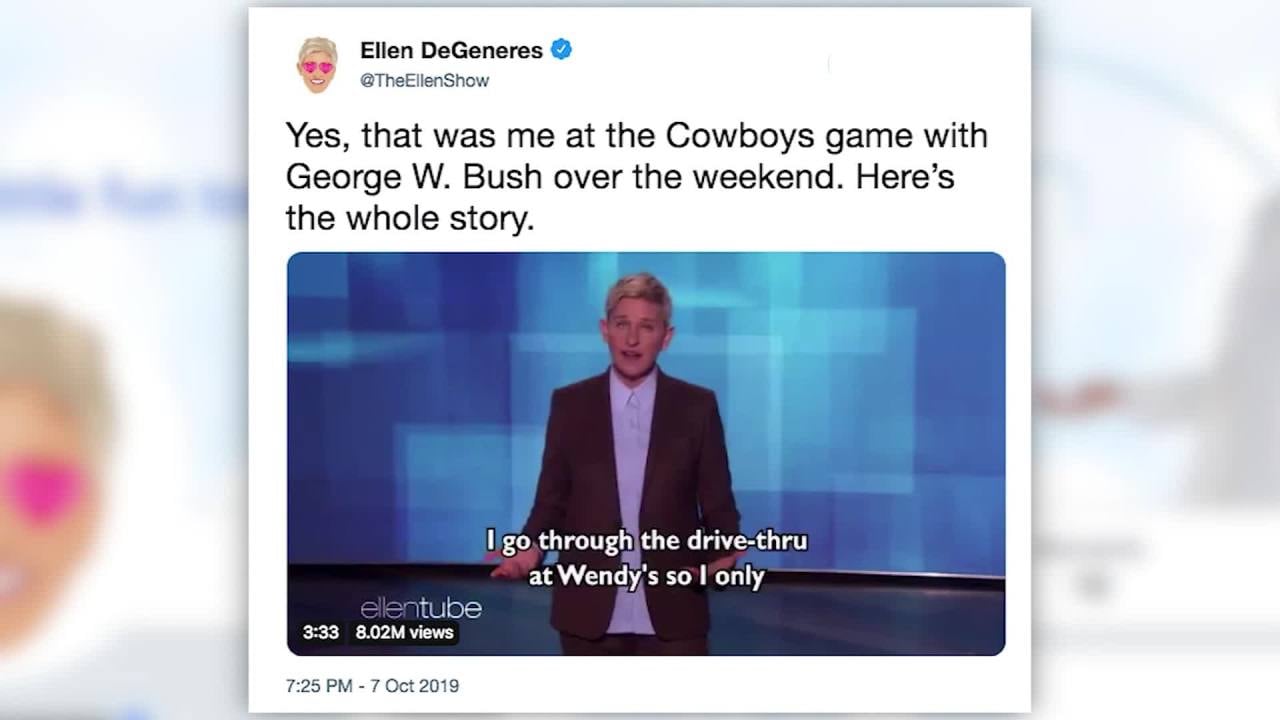 In a few 2019 tweets, Ellen stayed ahead of some accusations when photos and videos surfaced showing her enjoying a conversation with George Bush at a Dallas Cowboys football game.

This time around, the tweet-storm began with, “Yes, that was me at the Cowboys game with George W. Bush over the weekend. Here’s the whole story.” It’s no secret the former president was outspoken against gay rights, and some people still consider him responsible for “war crimes” and other human rights violations during his presidency. 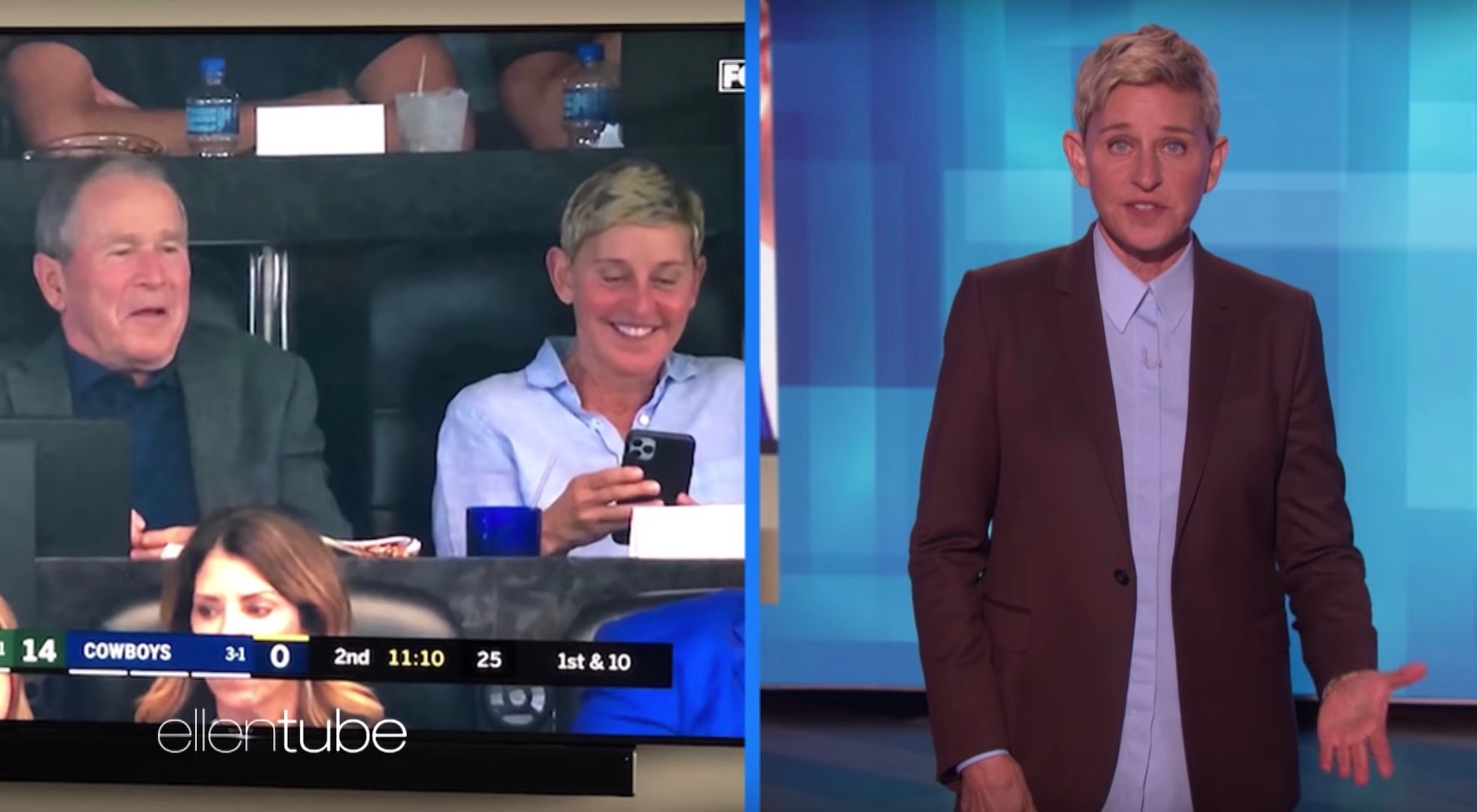 Although other celebrities and politicians defended Ellen’s actions by reminding others that two people can be friends but still disagree on issues, there was an outcry of disapproval on social media. Again, DeGeneres seemed unaware of how this decision would expose her hypocrisy and undermine the foundations of her show and lifestyle.

While some viewers were content with Ellen’s justification on keeping a dialogue and staying kind to others amongst disagreement, others took to Twitter and posted statements like, “He’s a war criminal, Ellen . . . What’s it like to be this shamelessly desperate for ‘access’ and attention?”

For someone who’s founded a career on kindness and the representation of others, Ellen has done a great job isolating her audience in some of her worst Twitter posts –  and so far, seems to be all about payback.