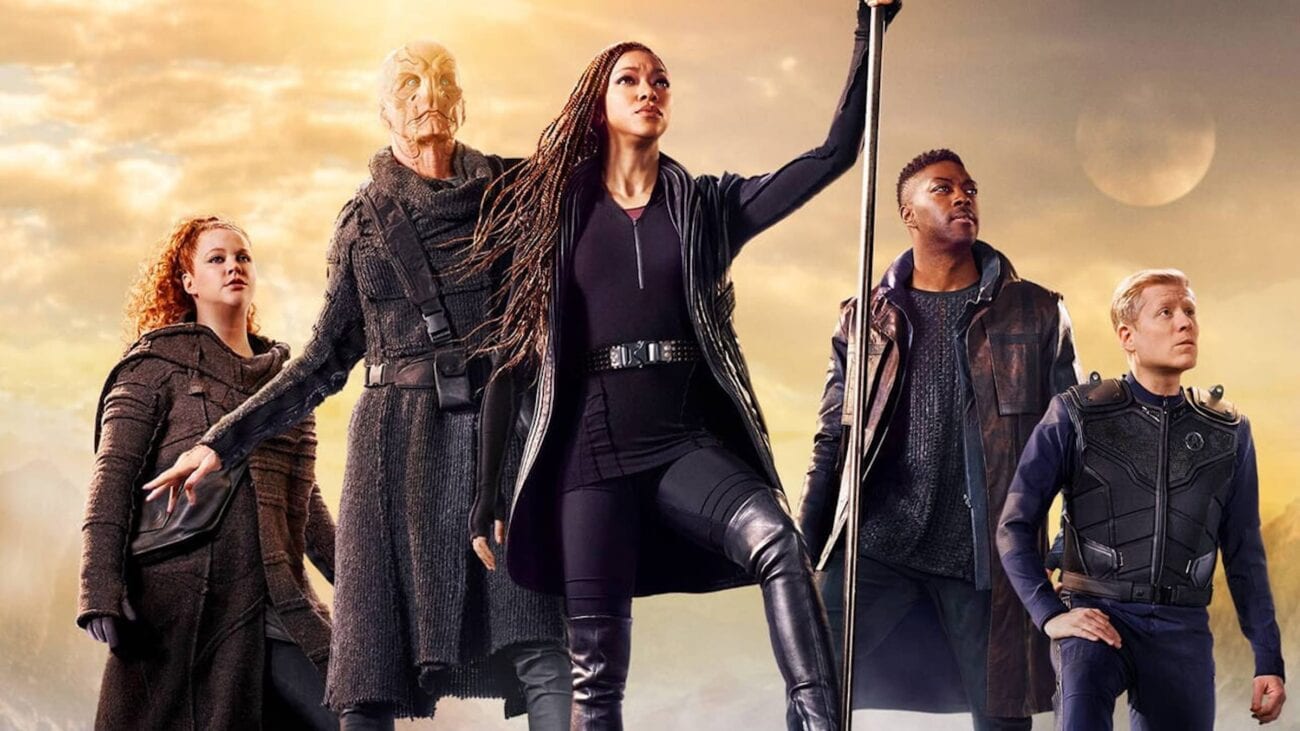 CBS’s All Access show, Star Trek: Discovery season 3 seems to be designed to reinvent the Star Trek universe — creatively speaking. At the same time it also reaches back into the franchise’s past to guide the path into a future of new possibilities.

Gotta get away from it all. That seems to be the prime motivation for Star Trek: Discovery season 3 to jump ahead 930 years from its twenty-third century setting all the way to the far-flung year of 3188. Though no one involved in the production has explicitly said so, it seems like this creative choice was fueled by a desire to have a blank slate to do whatever the producers want with this extremely talented cast.

In an interview with the Hollywood Reporter showrunner Alex Kurtman said, “I’m going to say, in all honesty, there are years & years left on Discovery. I think that because Star Trek, in general, has had a long history going, going something like seven seasons minimum, and we just jumped into the future.” 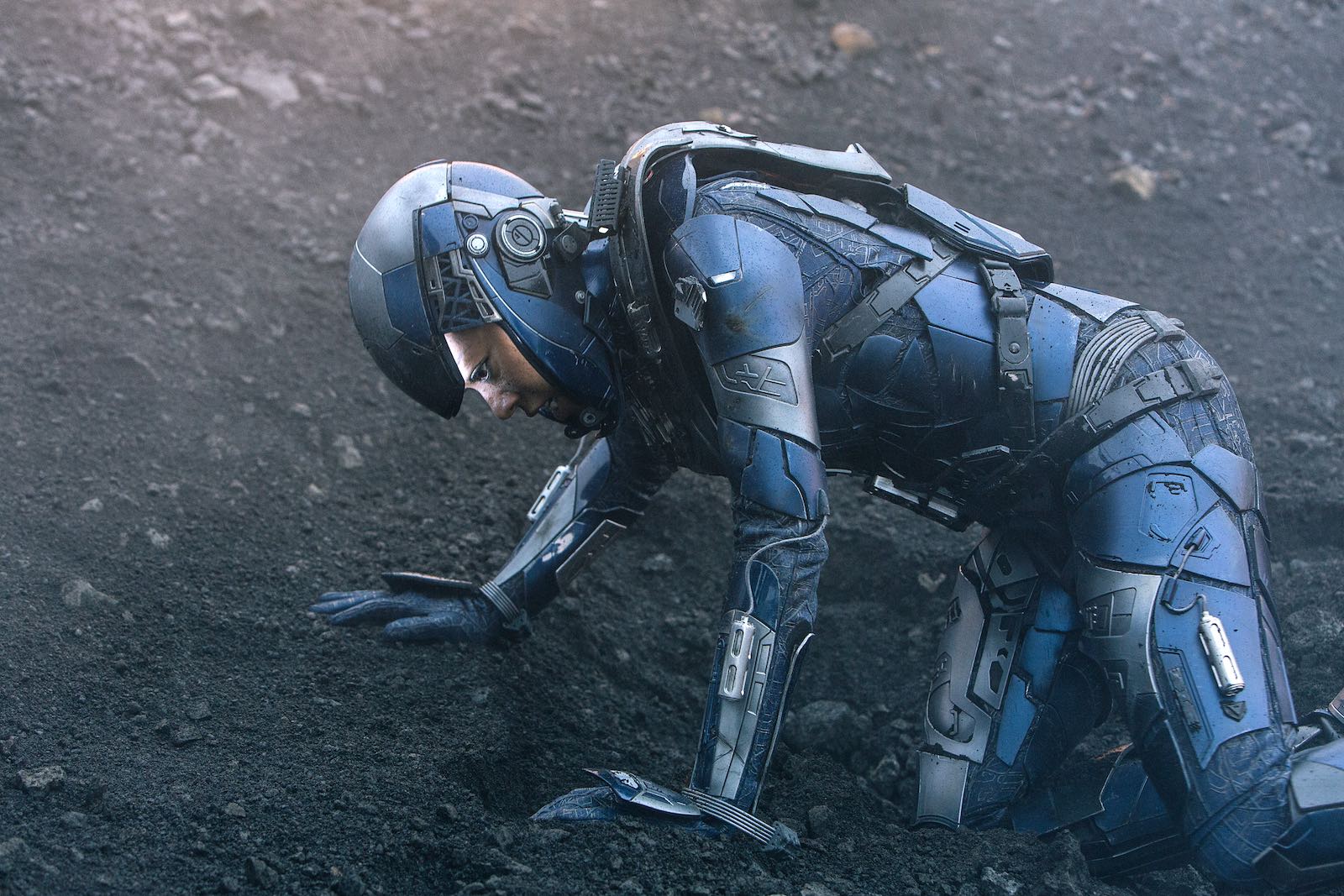 Up till now, Star Trek: Discovery has been a prequel, set ten years before “The Original Series” and more than a little bogged down by the limitations involved in having to weave an original story into a time period in which so much franchise mythmaking has already taken place.

Prequels are fun, but they have the potential to be more about recontextualizing characters and events we already know than in actually breaking new ground for original characters. “It’s not a brand new show,” stated Kurtzman, but it’s a whole new set of variables with a whole new set of ideas & stories, and I don’t think we limit ourselves to thinking, ‘Oh we’re capped at this place’”.

The remarkable thing is, through all that franchise complexity, Sonequa Martin-Green imbued extraordinary life into Michael Burnham and gave her one of the clearest arcs any “Trek” series lead has ever had – from Vulcan restraint at the beginning to human emotions flowering in full when we last saw her. 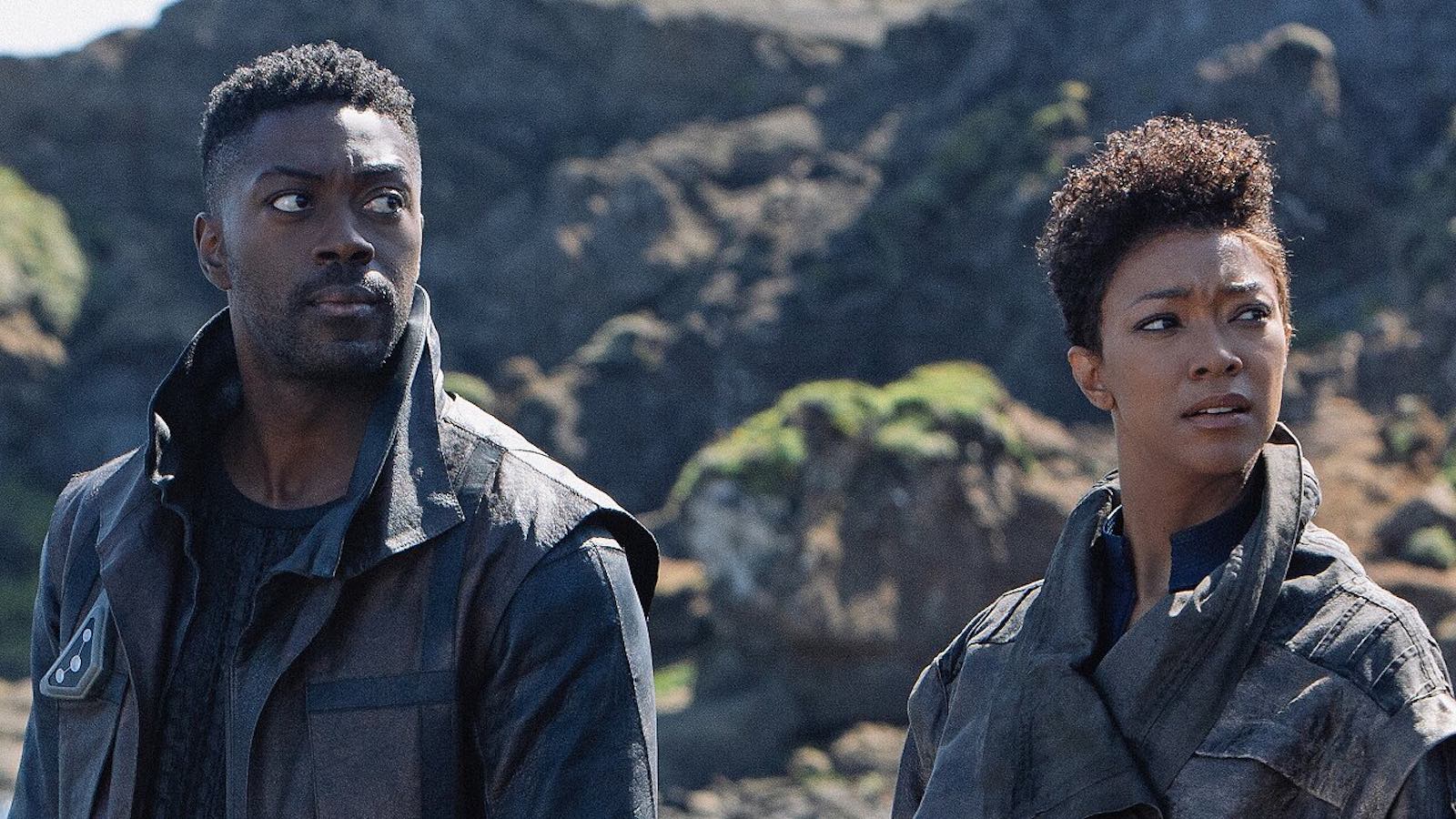 With a time jump into the thirty-second century at the end of Season 2, Burnham feels truly liberated. How something fits into existing canon no longer matters. All that does matter is good storytelling. And good storytelling is what we get in Star Trek: Discovery season 3. Burnham finds herself truly in the unknown. Landing on a desolate, granite-gray planet of high dunes and tranquil seas, she’s all alone.

Burnham had to fly in an Iron Man-type suit through a wormhole in order to blaze the trail for the USS Discovery to follow her into the future and out of the twenty-third century where it had become impossible for them to remain. As Star Trek: Discovery  season 3’s first episode, “That Hope Is You,” begins, Burnham and the crew are separated and Burnham has to adapt to 3188 largely on her own.

All that’s gone before

Before she landed, Burnham crashed into a ship piloted by a smuggler, or “courier,” named Book (David Ajala). He’s a daring rogue who might betray you at any moment — but who really has a heart of gold, and a deeply felt mission. It’ll be interesting to see how Book develops over time. His role in the first episode is largely to provide exposition about this strange new galaxy Burnham finds herself in.

Apparently, the Federation suffered a cataclysm over a century earlier. Suddenly, all over Federation space, dilithium – the crystalline material that allows warp drive to function – just exploded. This devastating event, known as The Burn, caused space travel to be possible for far fewer people. The Federation retreated into a tiny rump state, with barely any of the influence it once had. 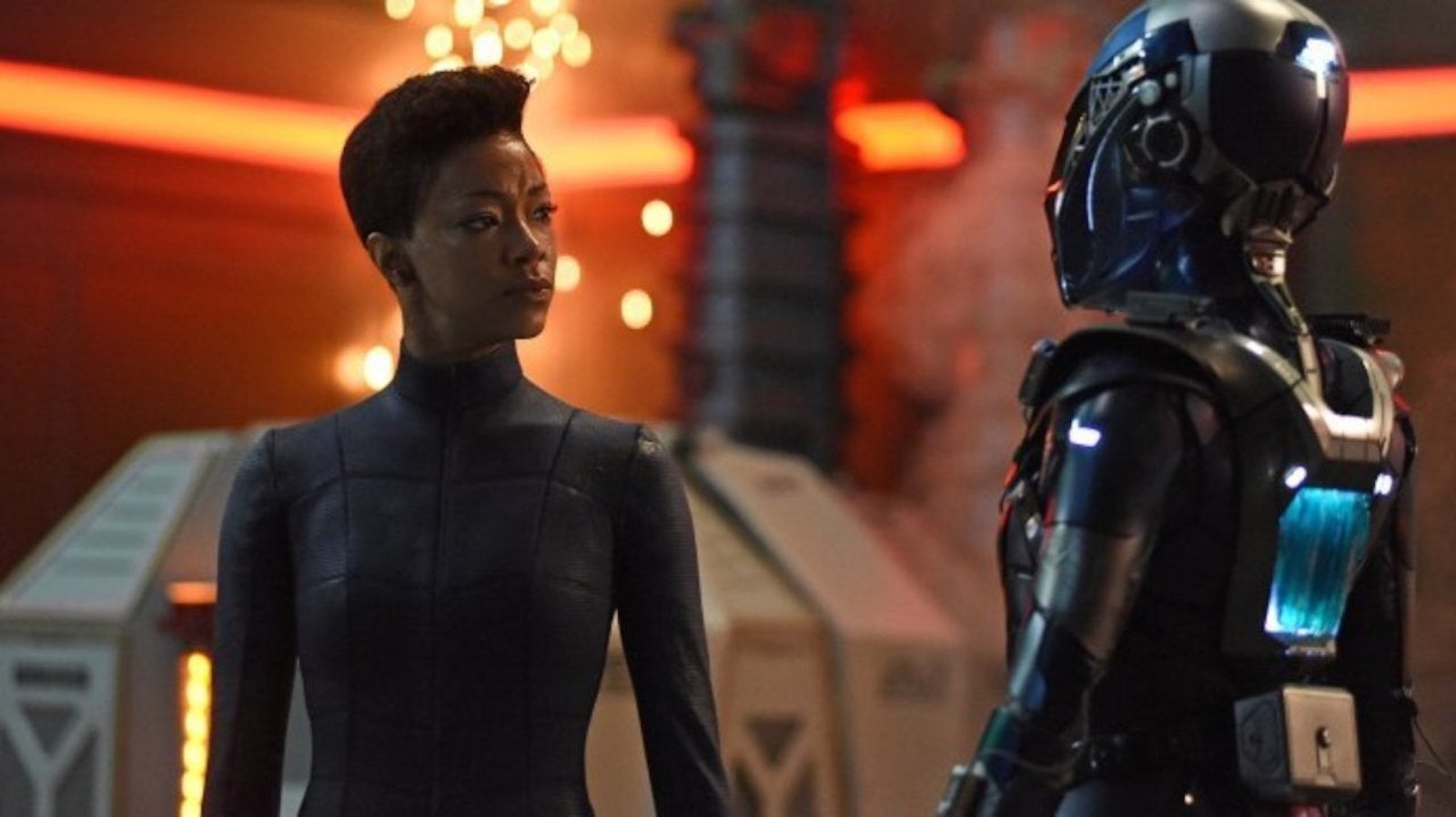 As such, the collapse of the Federation is a big deal in the world of Star Trek, especially since Starfleet and the Federation have long served as metaphors for American self-image. If James T. Kirk (William Shatner) is an analogue for President John F. Kennedy, then the Federation can be seen as an extrapolation of the myth of Kennedy’s “Camelot,” a romantic extension of American exceptionalism.

The original Star Trek offered a number of dark mirrors to the Federation, as if suggesting an alternate dark future for the United States. These mirrors were often evocative of Rome. They tied into the old cliché that the United States was a “modern day Roman Empire,” a warning that the enlightened Federation was not the only possible future.

As Burnham wanders through the dark collapsed future of “That Hope Is You, Part 1,” it’s hard not to think of The Decline & Fall of the Roman Empire. Once again, it seems like Star Trek has turned to its own past to guide its future, with Burnham effectively arguing for in-universe nostalgia. 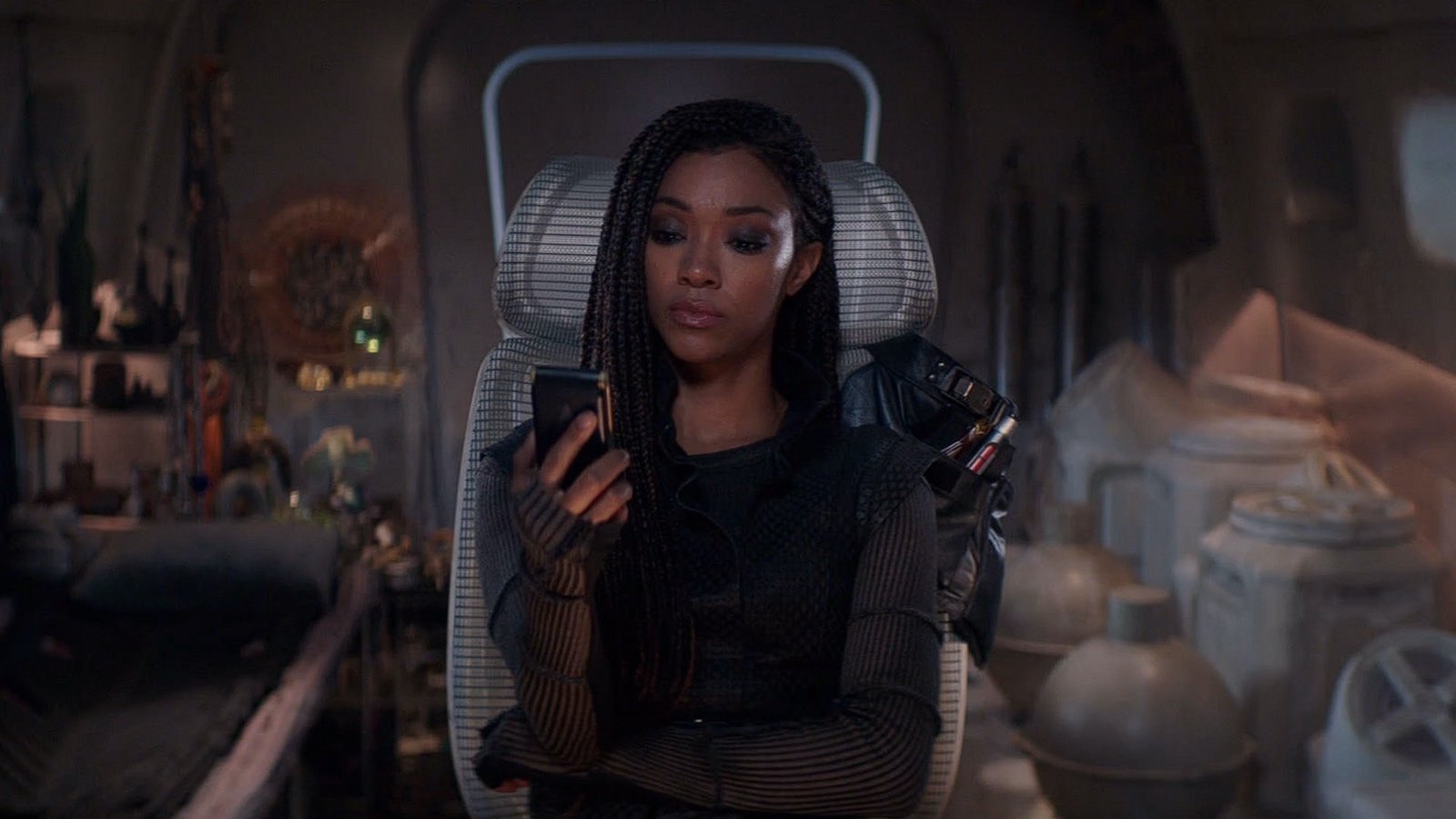 The end of the tunnel

Instead, the closing moments of “That Hope Is You, Part 1” focus on the commissioning of Aditya Sahil (Adil Hussain). Son of a former Starfleet officer, living in an old, abandoned relay station, Sahil is a candle burning in the window, lit in the hope of reigniting the flame of Federation ideals. The episode presents Sahil’s commission as a triumphant moment & music soars as he hangs a Federation flag on the wall.

What’s intriguing about this whole new world of storytelling possibilities is that, unlike Star Trek: Voyager, which plunged a Starfleet crew into similarly unknown terrain, these characters aren’t necessarily setting out on “a journey home.”

The characters in this new Star Trek universe made a choice to be in 3188, and it seems like they’re going to stay there. What matters isn’t going back from whence they came as much as bringing their values with them into this uncertain new present. And that could lead to many more emotional adventures ahead.