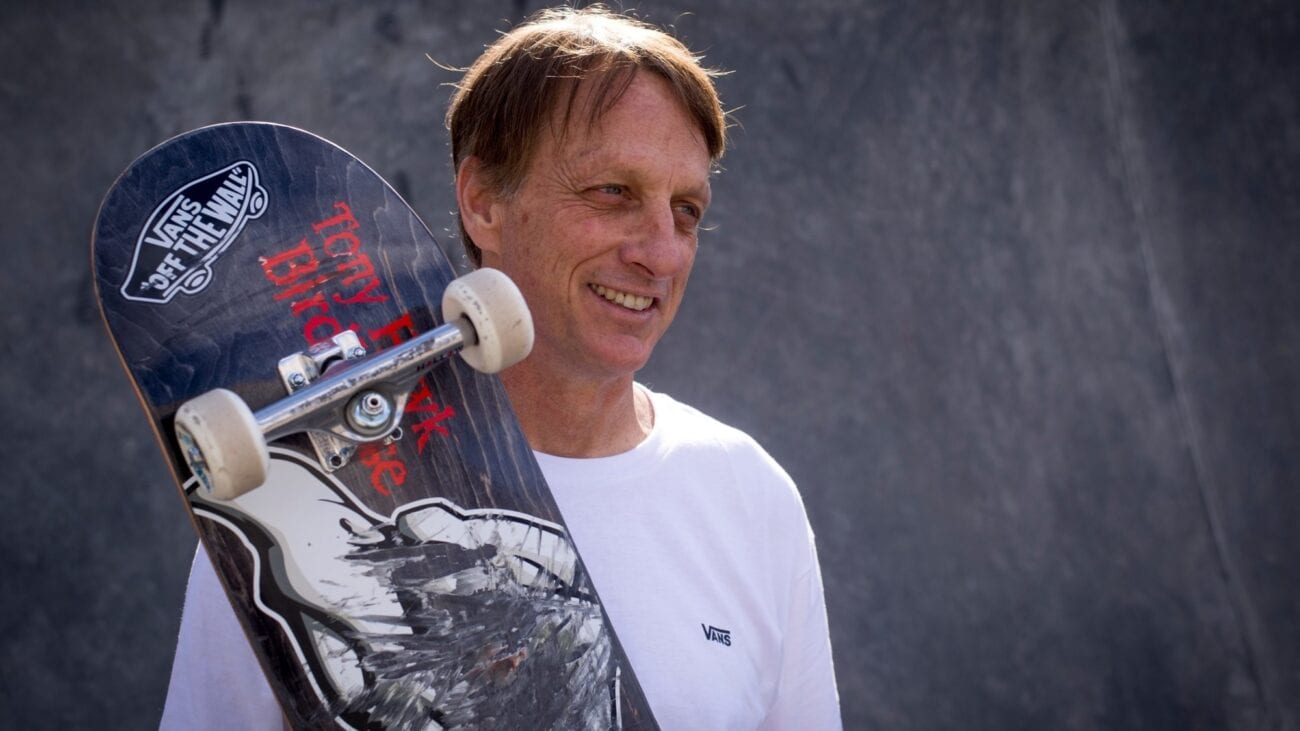 Try to spot Tony Hawk in a crowd: The most awkward Twitter threads

Tony Hawk is the Michael Jordan of skateboarding. The man is now a household name after skateboarding made the jump from subculture to the mainstream of the sports world. With skateboarding set to debut at the now-postponed 2020 Olympic Games, it’s as recognized a sport as ever, and Tony Hawk as famous as ever for his talents.

Tony Hawk’s celebrity has surpassed the bounds of his skateboarding skills. The athlete is securely stitched into the cultural fabric of millennials & zoomers alike with his wildly successful Tony Hawk’s video game series that’s pumped out banging sequels nearly every year since its premiere in 1999.

If you haven’t heard of Tony Hawk’s games (and I bet you have), you’d have seen him in dozens of other ways; the pro athlete has appeared as a guest on the small screen from huge shows like The Simpsons & The Masked Singer to late-night cult hits like The Eric Andre Show. His latest project, however, comes to us through the addictive social media app Twitter. 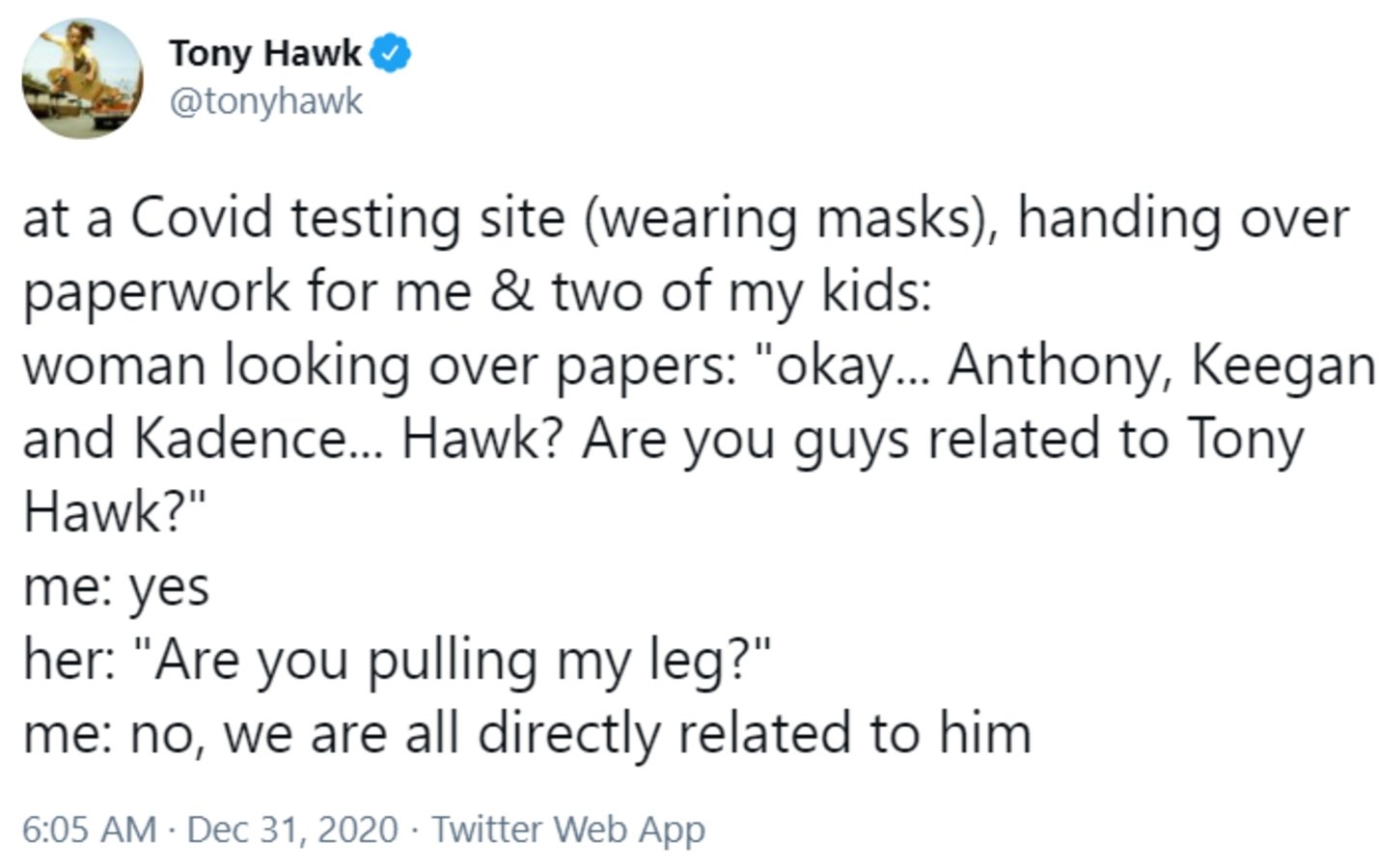 Don’t I know you?

Tony Hawk posts encounters with his fans on his Twitter. However, these encounters don’t go as one would expect: the fans don’t recognize the great Tony Hawk. The athlete has some fun with this, and lets the people he encounters ponder why he might look so much like . . . someone?

For years now, Tony Hawk has shared times fans almost recognize him, even before the times of COVID-19 when a mask can make you double take seeing a familiar face on the street. Let’s look back at some of the great run-ins on Tony Hawk’s Twitter. 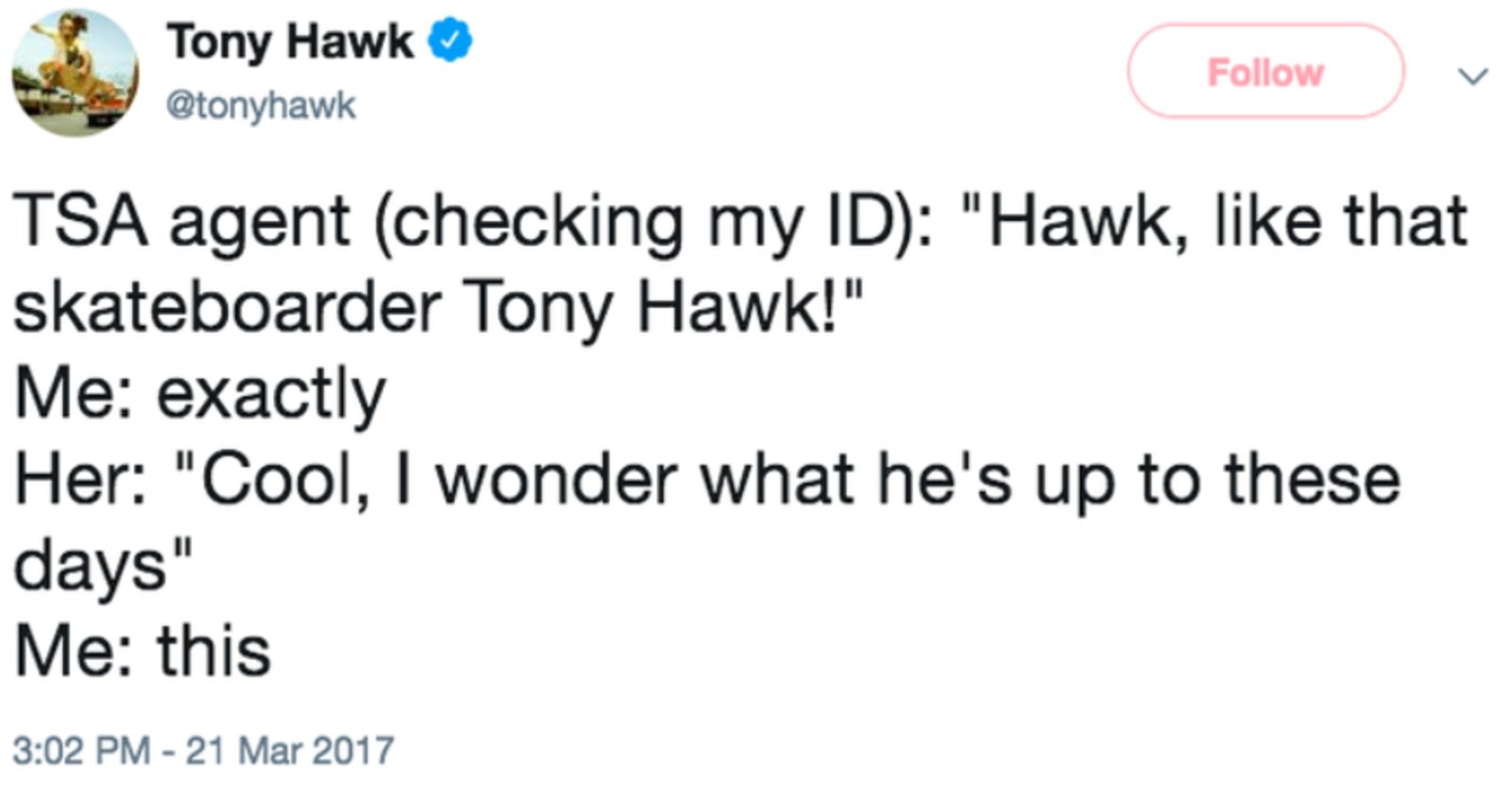 Back when flying around the globe and seeing new places was a normal occurrence (We’re not crying, it’s just something in our eye), airport security might slow down your trip. In 2017, Hawk told us how an TSA agent, even after reading his ID, couldn’t spot the famous skater.

The tweet reads, “TSA agent (checking my ID): “Hawk, like that skateboarder Tony Hawk!” Me: exactly Her: “Cool, I wonder what he’s up to these days Me: this.” 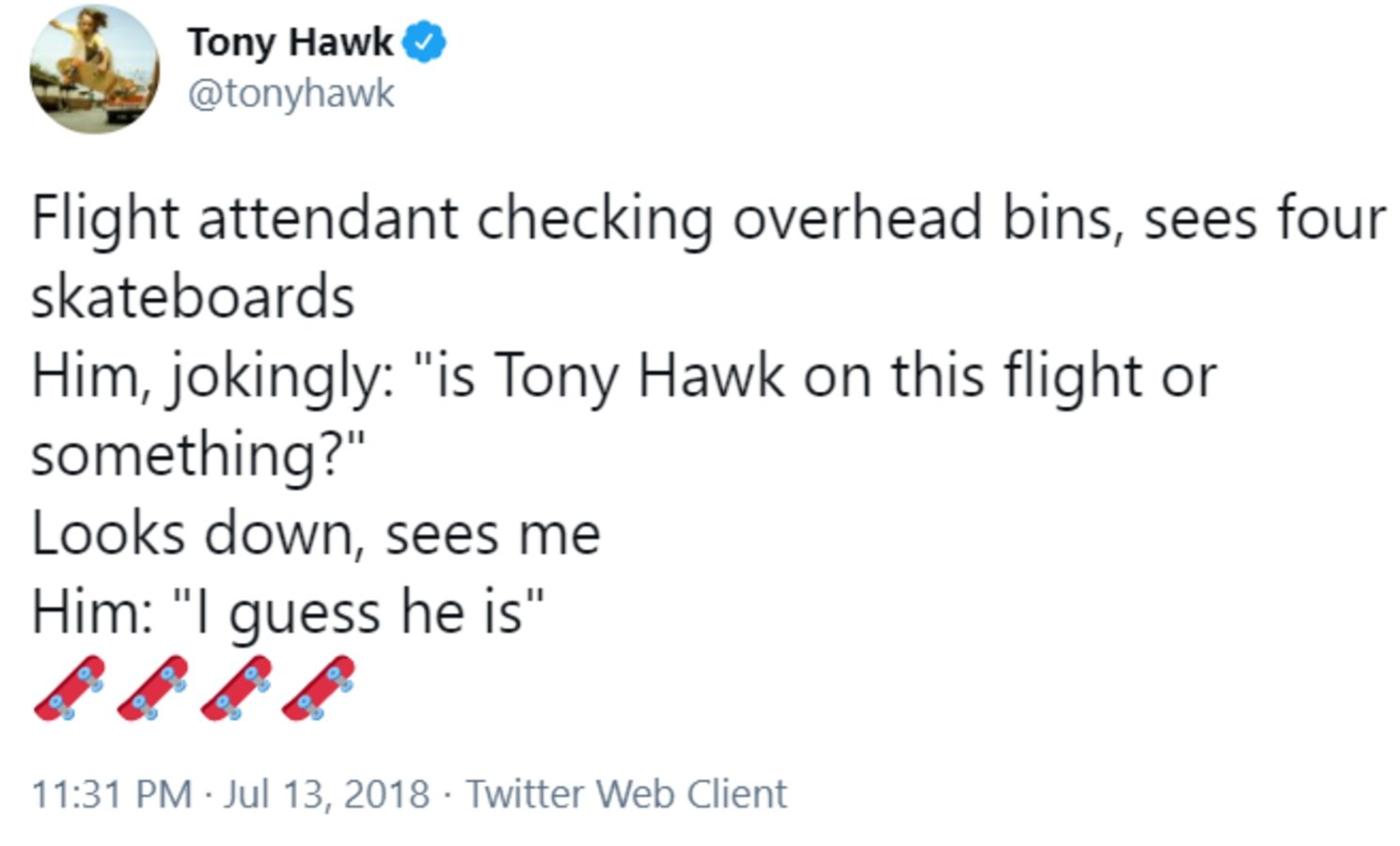 In 2018, Twitter told us Hawk had another chance to be recognized on an airplane, which led to an even more awkward encounter. This time, Hawk was spotted as himself but it couldn’t have happened less smoothly.

The tweet told us that a flight attendant checking overhead bins saw four skateboards and asked Hawk jokingly, “is Tony Hawk on this flight or something?” The attendant then looked down, saw him, and simply said “I guess he is.” 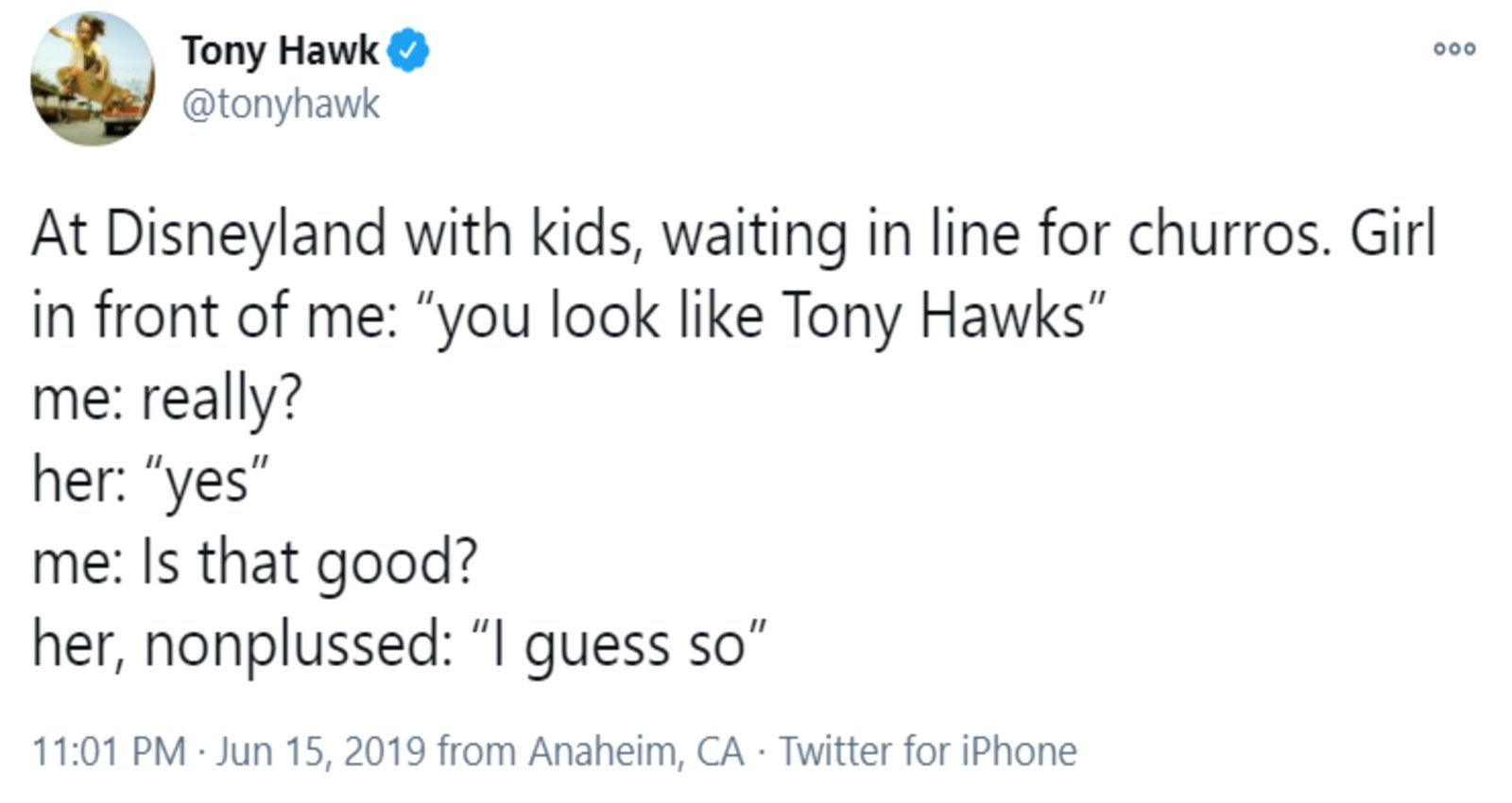 The encounters on Tony Hawk’s Twitter moved from mundane moments in travel to grander settings like when he took his kids to Disneyland in 2019. His tweet from that summer told us of his encounter waiting in line for churros at the famous theme park.

The girl in front of Hawk told him he looks like Tony ‘Hawks’. He asked if that’s a good thing to which she replied, “I guess so.” 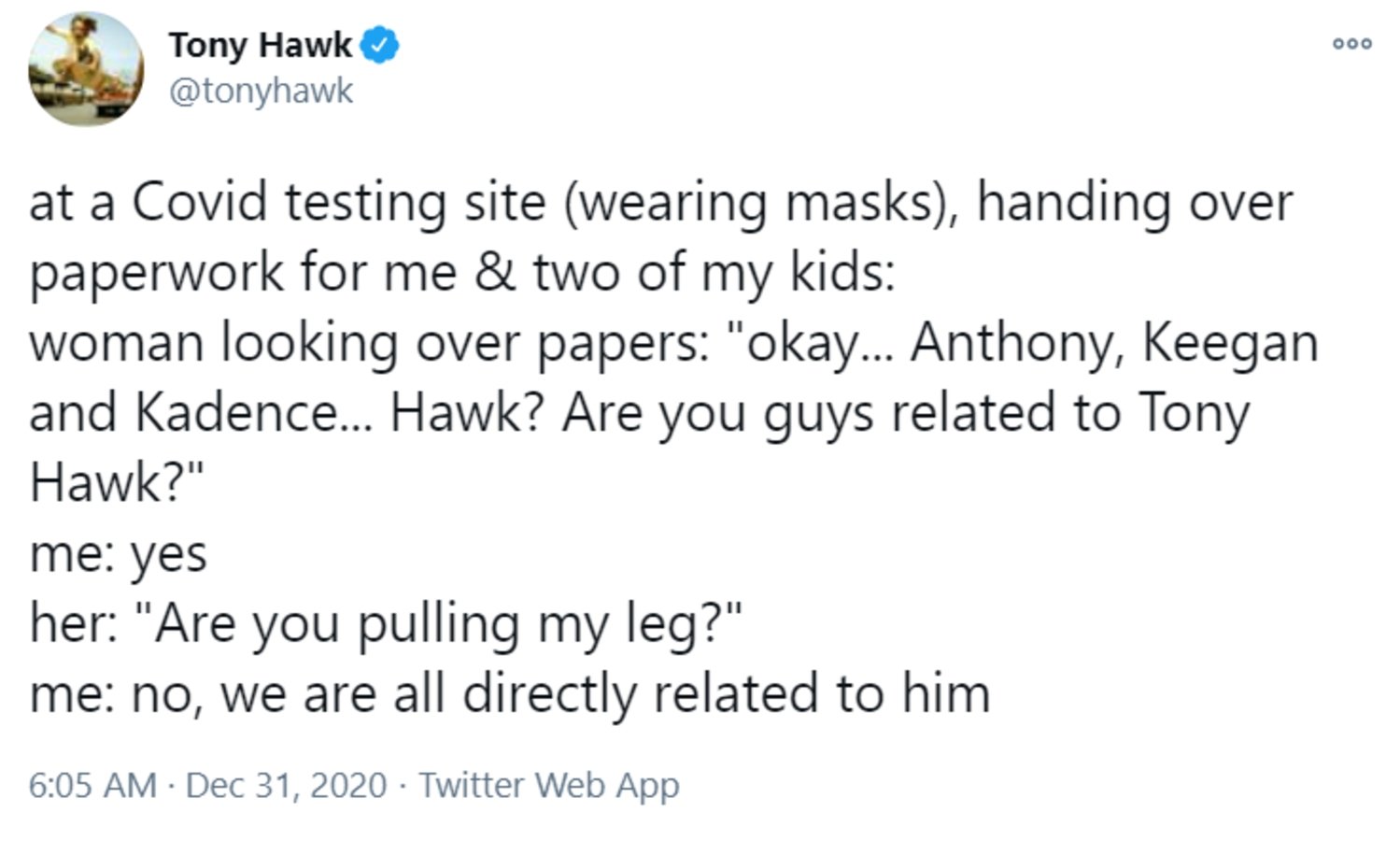 Tony Hawk’s self-deprecating encounters of missed recognition made a comeback during the pandemic. On Thursday, he tweeted about another awkward encounter, this time at a COVID-19 testing site with his kids.

The tweet detailed an account where a woman looked over the Hawk family paperwork and asked, “Are you guys related to Tony Hawk?” Hawk replied yes and the woman asked if he was pulling her leg. Instead of correcting her Hawk simply said, “yes, we are all directly related to him.”

Tony Hawk has reinvented himself as a comedian telling his hilariously awkward tales on Twitter. The encounters will no doubt continue, perhaps at a greater frequency with mask mandates around the country. If he’s not careful, he’ll be recognized not from his skateboarding accolades, but by his cringe-worthy Twitter stories.