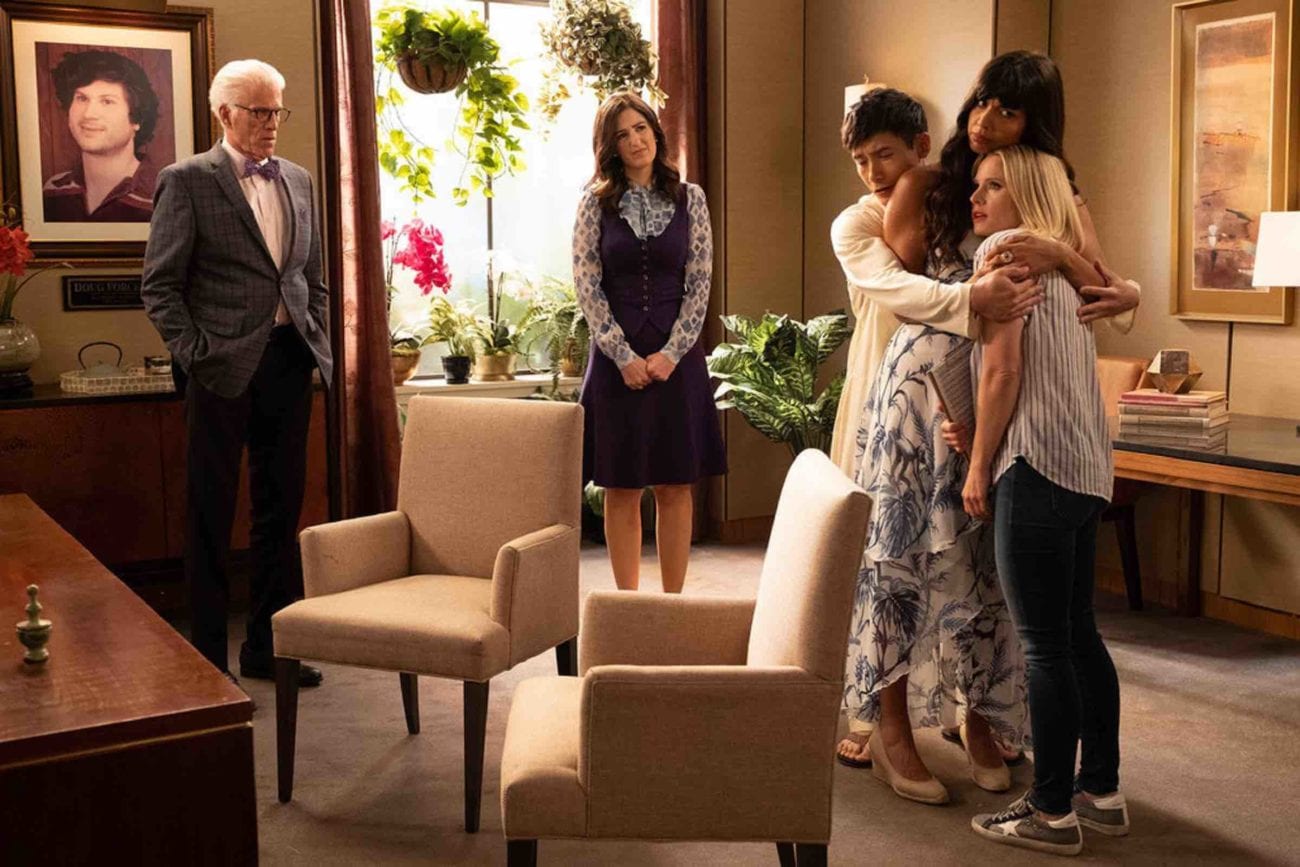 We interrupt our usual The Good Place recap for an episode of Demon vs. Demon – which is basically what “Tinker, Tailor, Demon, Spy” is: a test of faith between the Soul Squad and Michael, proving if he truly is one of them or if he’s still a demon on the inside.

The Soul Squad and the four humans are playing Magic Pictionary in the opening of S4E4, and Chidi manages to draw an abomination of a horse. Of course, because it’s Magic Pictionary, this abomination is brought to life and terrorizes the neighborhood until Janet kills it. 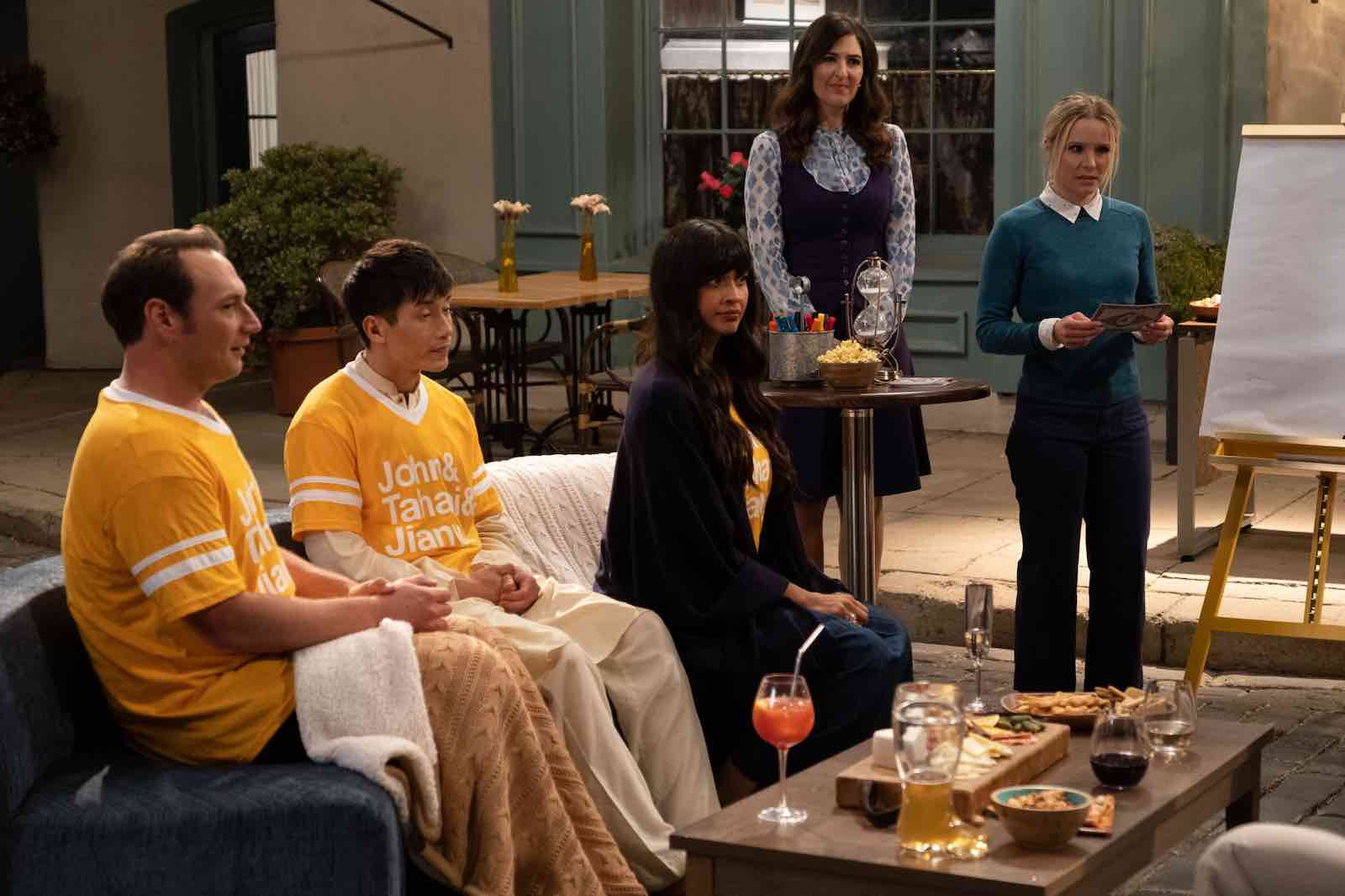 After that disaster, Eleanor (Kristen Bell) is getting anxious. They haven’t put on a good activity in three weeks and don’t seem to be making any progress. But the brainstorming session is put on hold when a mysterious visitor appears on the train tracks. It’s Glenn (defecting because Michael (Ted Danson) isn’t Michael, it’s Vicky (Tiya Sircar) in the Michael suit – or so Glenn claims.

Glenn is getting sick of being Shawn’s punching bag, plus if he’s been torturing people that actually belonged in the Good Place, he’ll feel a lot more guilty about reinflating penises just to get flattened again. So it comes down to this: whom will the Soul Squad trust? 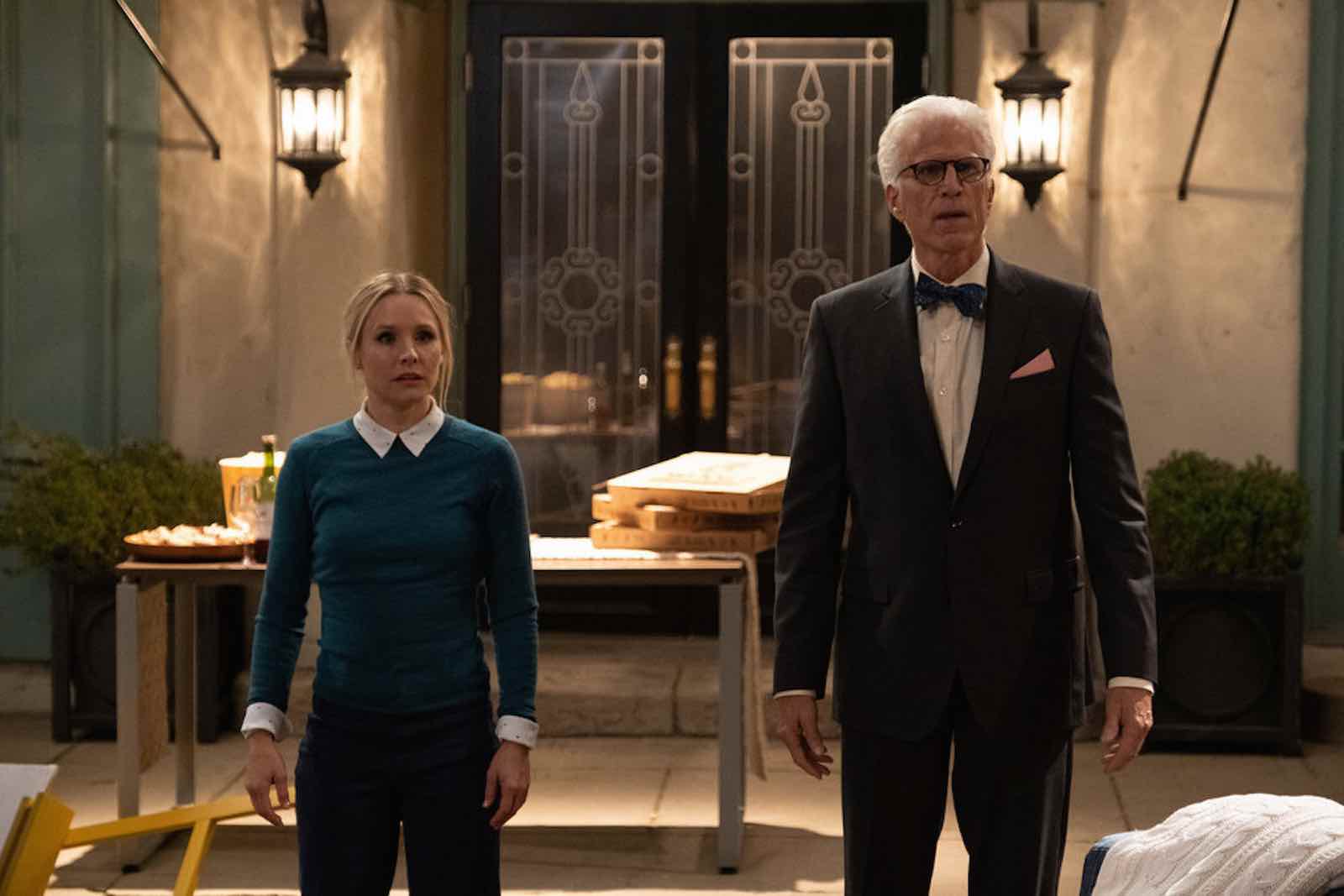 Why should the Soul Squad trust Michael? They’ve known him longer, he’s still trying to take care of the experiment, and he’s genuinely embarrassed by his old identity: he doesn’t want the humans to see him in his giant fire squid demon form.

But Michael has also been lying to the humans. He didn’t tell anyone when Shawn (Marc Evan Jackson) called talking about the Michael suit, and he’s been acting awfully strange since then. Plus, he brushed off Eleanor when she saw through demon Chris’s act. Maybe he is just a demon in disguise. So it comes down to whether Glenn is trustworthy or not. 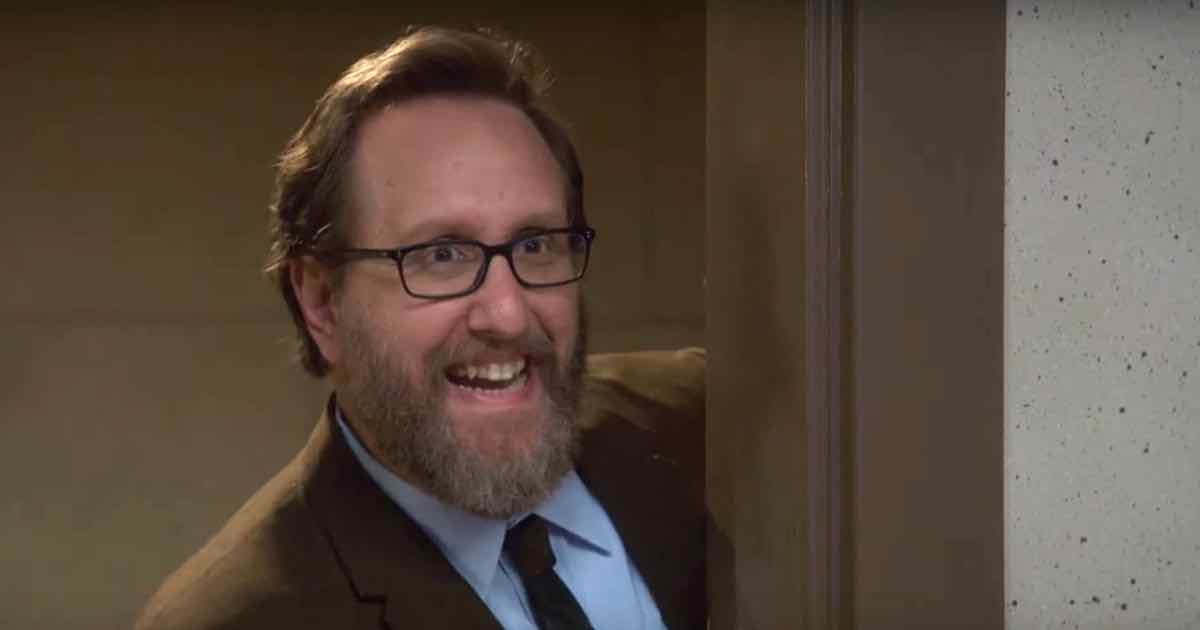 Glenn is a demon coming from the Bad Place in disguise. Is he trying to split up the Soul Squad, or genuinely help? The humans know Shawn is a bully, so it’s no surprise they believe that Glenn is sick of being picked on by Shawn. Glenn does have a point about being unsure if he can keep torturing humans, as Michael is a reformed demon too.

But Glenn hasn’t been with the group for years like Michael and has been known to sabotage the Soul Squad at time. So he’s still not on anyone’s good side either. What it comes down to is if Eleanor wants to just trust Glenn or Michael, or call the Judge and reset the experiment. 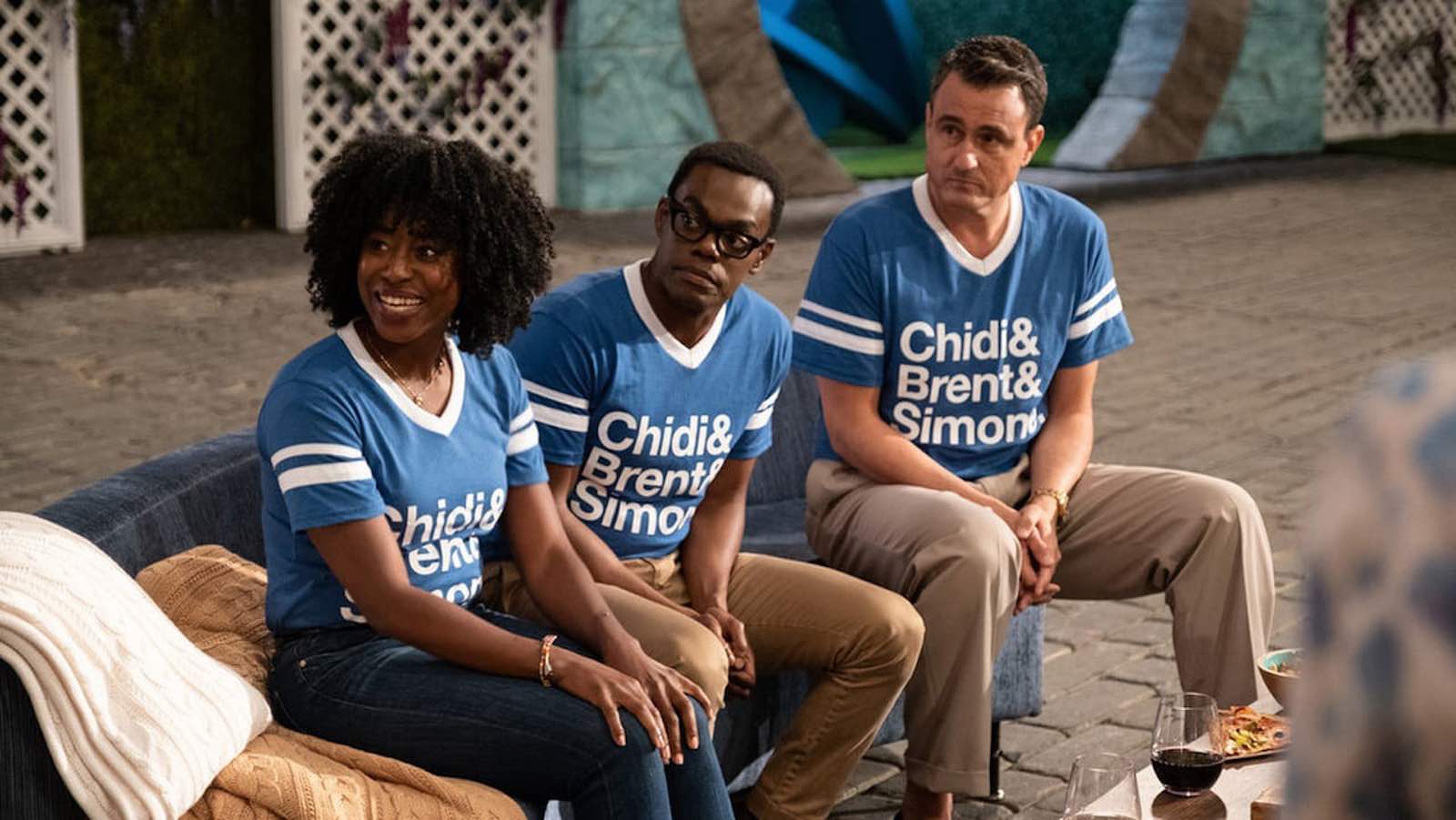 Eleanor really cannot decide who is the truthful demon and asks Janet (D’Arcy Carden) to whip up a demon lie detector to make some sense of everything. Of course, almost immediately it disintegrates Glenn to goop – so the lie detector won’t get them anywhere.

Eleanor gives up and decides to call the Judge. In the worry that they’ll be giving up their current advantage in the experiment, Michael offers to sacrifice himself by turning himself to goop, too. Watching Ted Danson say “Take it sleazy” again with the uttermost sincerity is hilarious and heartbreaking simultaneously. We noticed Jason in the background with an unusual expression of thinking on his mug.

Just in time, Jason (Manny Jacinto) jumps up and uncharacteristically saves the day by slapping Derek’s magnetic handcuffs on Janet, revealing that she’s the true traitor. 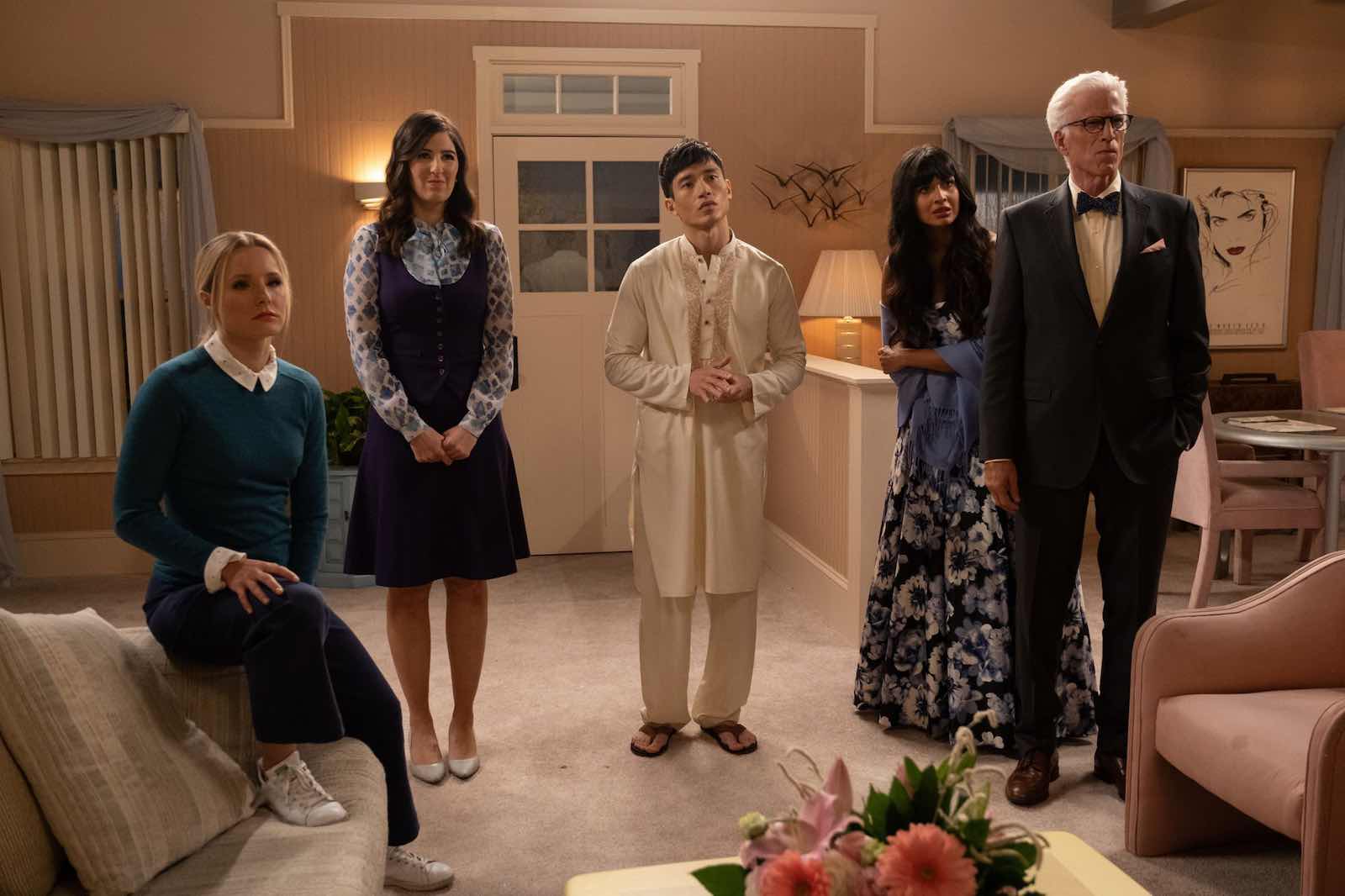 Back in episode one of this season of The Good Place, Janet was the one who escorted Chris onto the train. While one Bad Janet was on the platform distracting the humans, another was marblizing Good Janet, then transformed her appearance into the Janet we know and love and started messing with the experiment.

Jason figures out Janet is not herself because, when Jason calls her “girl”, Janet didn’t respond with “Not a girl” as usual. Of course, this means Good Janet didn’t actually break up with Jason, which has got to make him feel a lot more confident in their relationship. 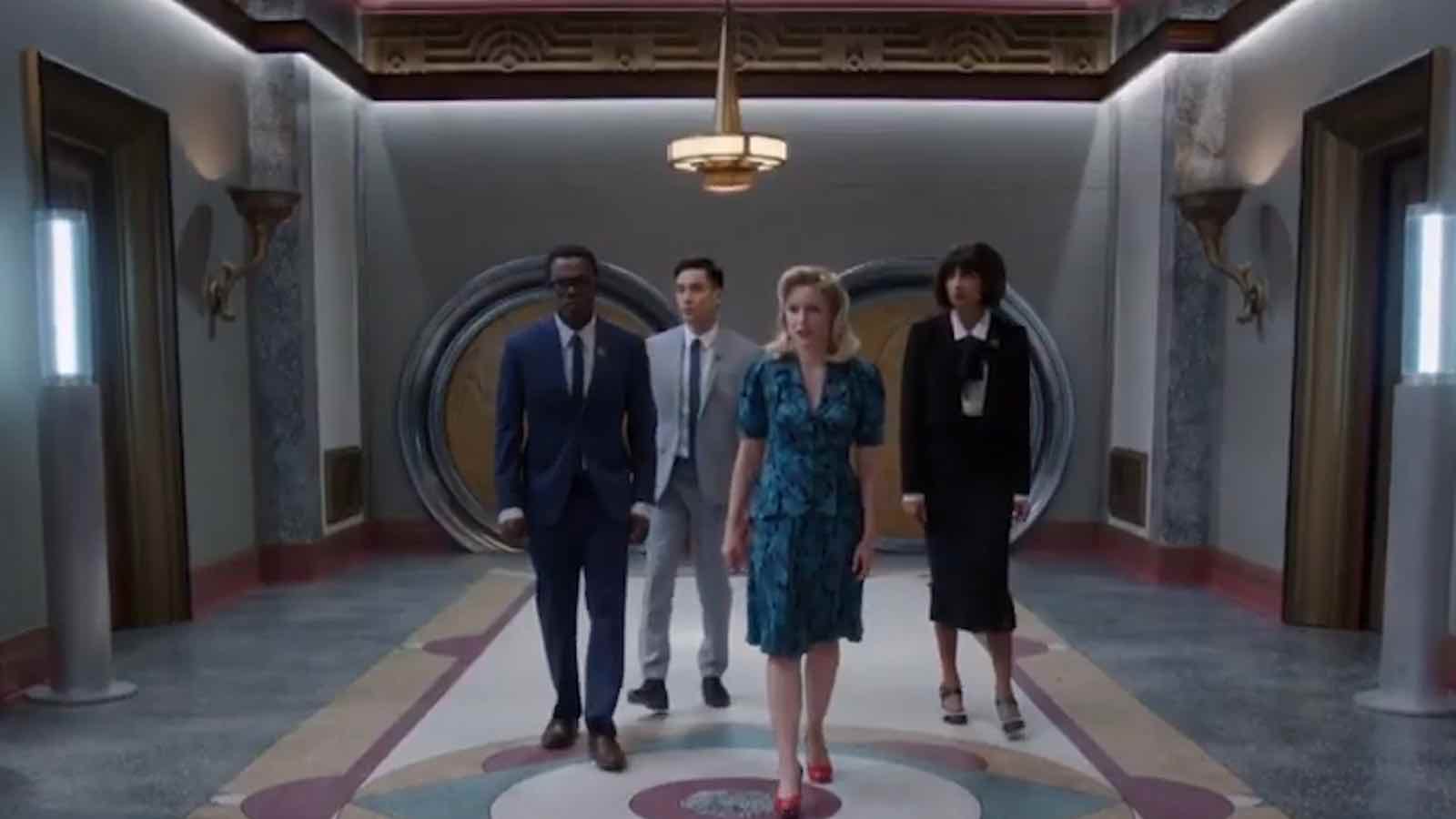 Thanks to this revelation, everything is back to normal in the Soul Squad – except they’re short a Janet. In the best moment from Manny Jacinto so far this season, Jason goes on a passionate speech about punching Shawn in the face for messing with his not-a-girl. So Jason & Michael take Glenn’s pushcart to the Bad Place to save Janet, while Tahani (Jameela Jamil) & Eleanor hold down the fort in the experiment’s fake GP.

This episode shows that if anyone was unsure about this season before, Mike Schur and company know what they’re doing. The classic comedy we’ve come to love from The Good Place is back in full swing and it’s gonna be a fun ride these remaining nine episodes. *Rubbing hands together demonically* 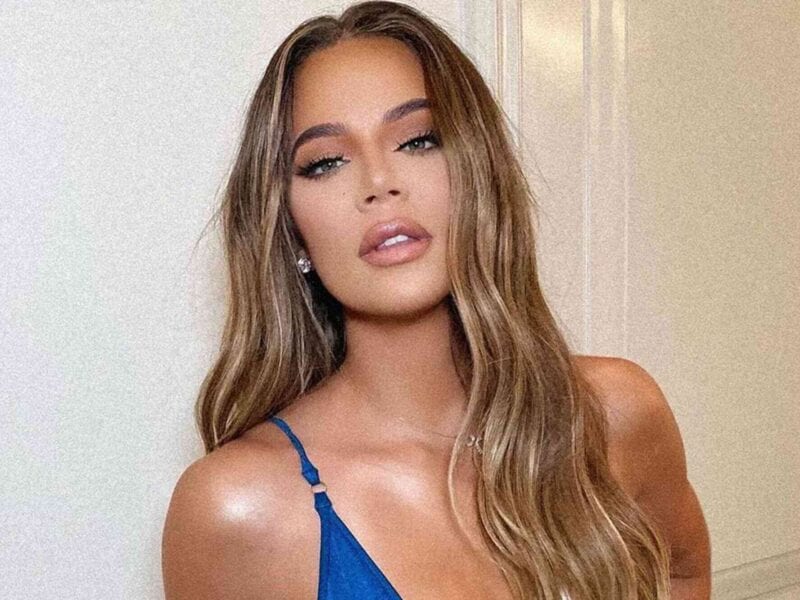 Khloe Kardashian speaks out: Will the influencer lose her net worth? 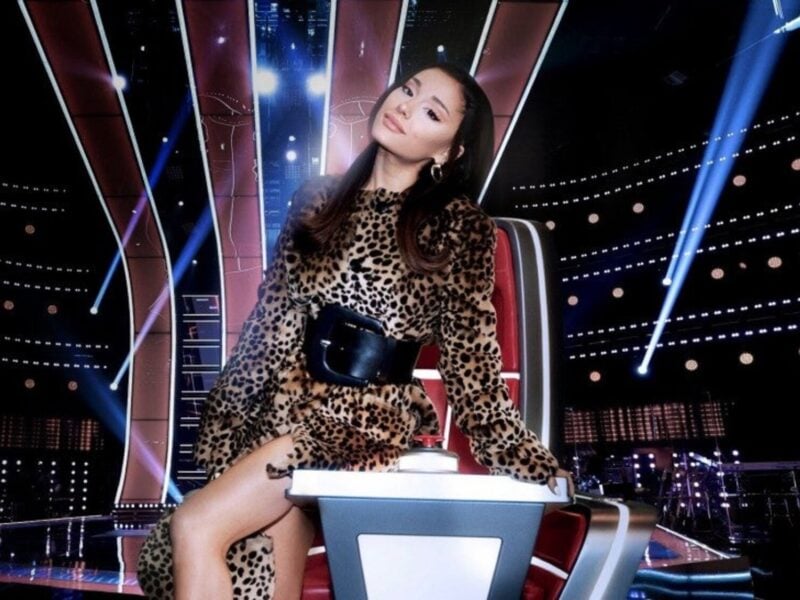