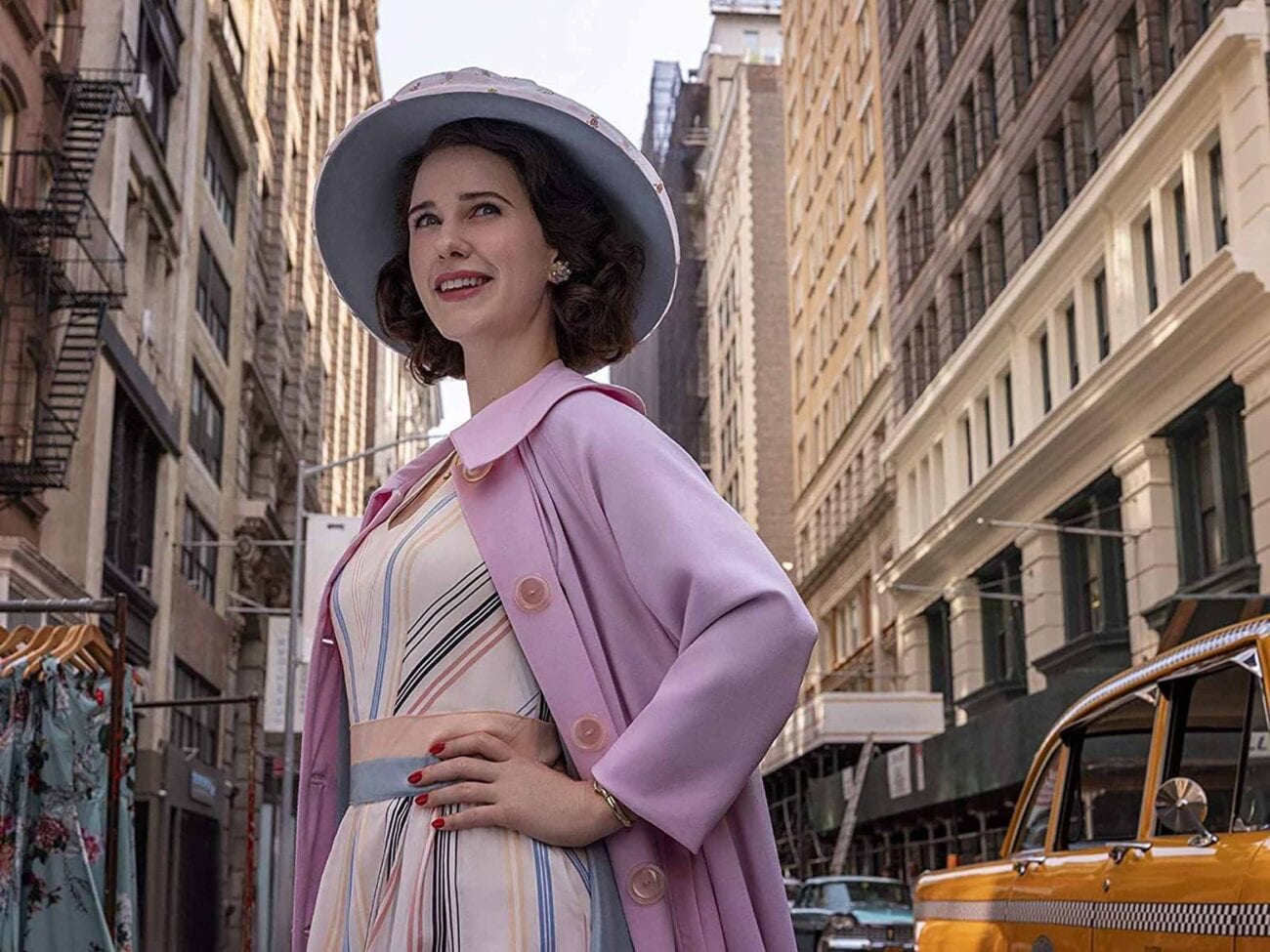 The Marvelous Mrs. Maisel is coming back for a fourth fabulous season on Amazon Prime! And in time honored fashion, we’re revving you up with some of the best moments in the past three seasons. It’s the late 1950s and Miriam “Midge” Maisel has everything she has ever wanted – the perfect husband, two kids, and an elegant apartment on New York’s Upper West Side.

Midge’s seemingly idyllic life takes a surprising turn when she discovers a hidden talent she didn’t previously know she had – stand-up comedy. The revelation changes her life forever as she begins a journey through the city’s comedy industry on a path that could ultimately lead her to a spot on the Tonight Show couch. 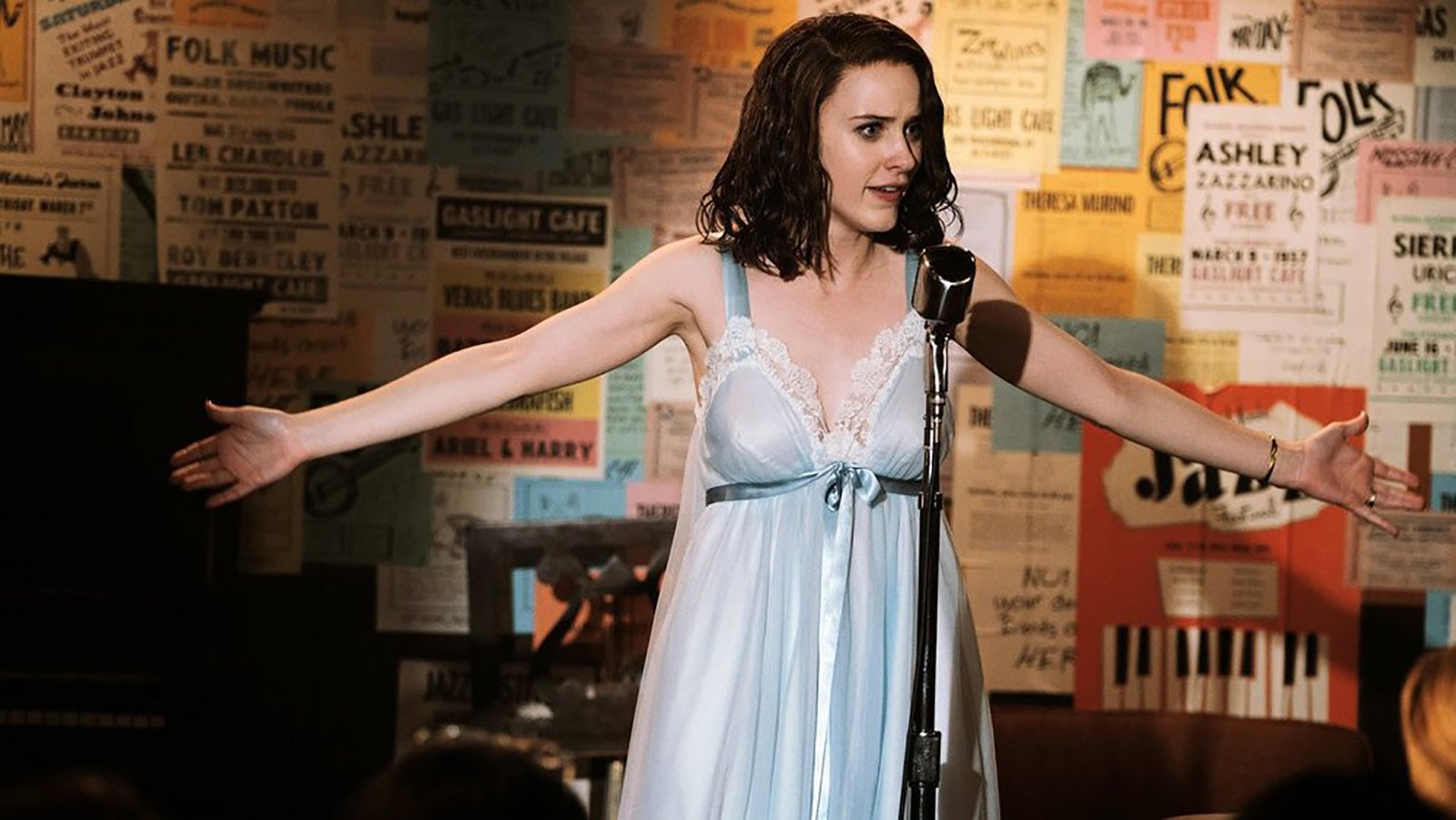 After Midge’s (Rachel Brosnahan) businessman and wannabee comedian husband Joel (Michael Zegen), reveals that he’s been cheating on her for months with his secretary, she does what any other sane person who just found out their husband has been cheating would do. She gets drunk on red wine and goes to the Gaslight – a famous 50s comedy club in Greenwich village – in a rain-soaked nightgown.

In this drunken comedy bit, Midge shows the crowd how difficult it is for a woman to be well, a woman, under the microscope of their husbands and the pressure to be perfect housewives. To prove her point, she drops her nightgown to unveil her bare breasts and says that even after childbirth, her two prized possessions are “standing up on their own.” 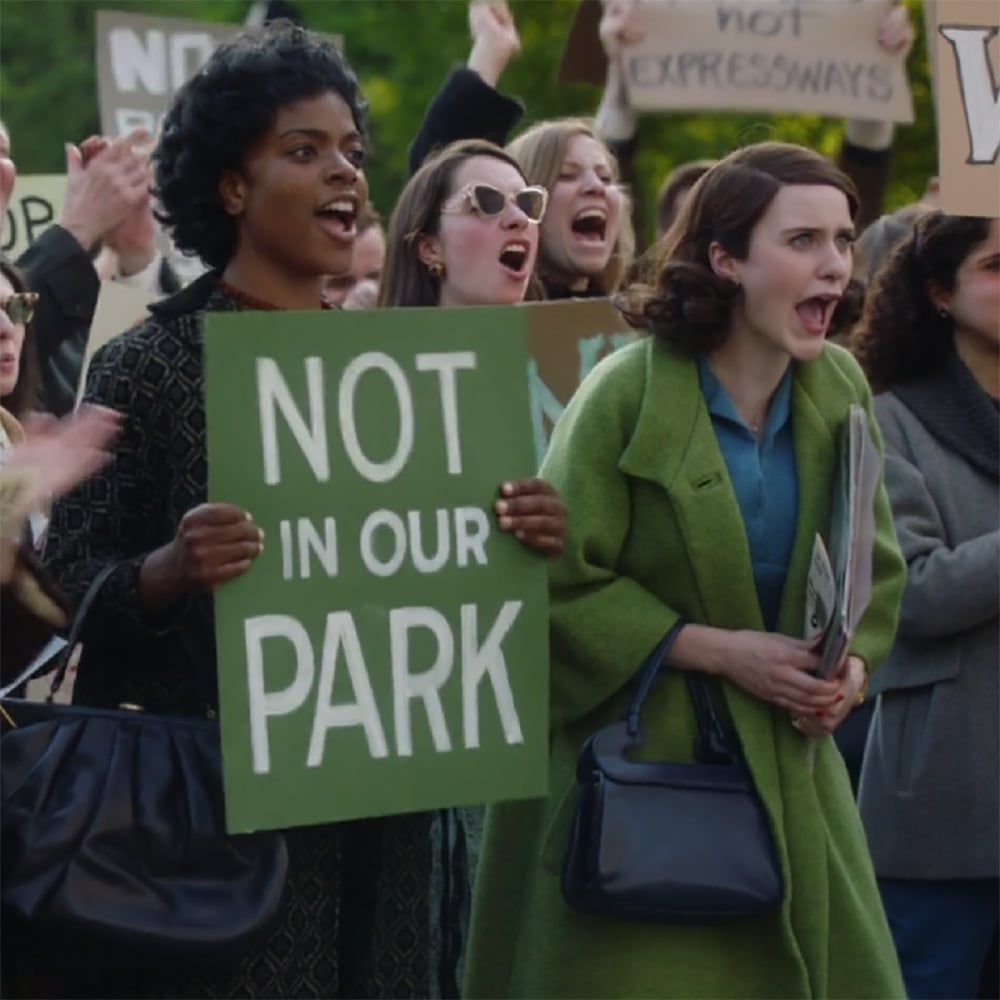 Impromptu speech at a women’s rally

Midge happens to walk past a women’s rally in Washington Square Park (“so many women in one place, is there a two-for-one special in panty hose?” she quips) led by the real-life Greenwich Village activist Jane Jacobs. After eloquently putting in her two cents, Midge ends her speech by saying, “Women will fix it . . . and accessorize it!” 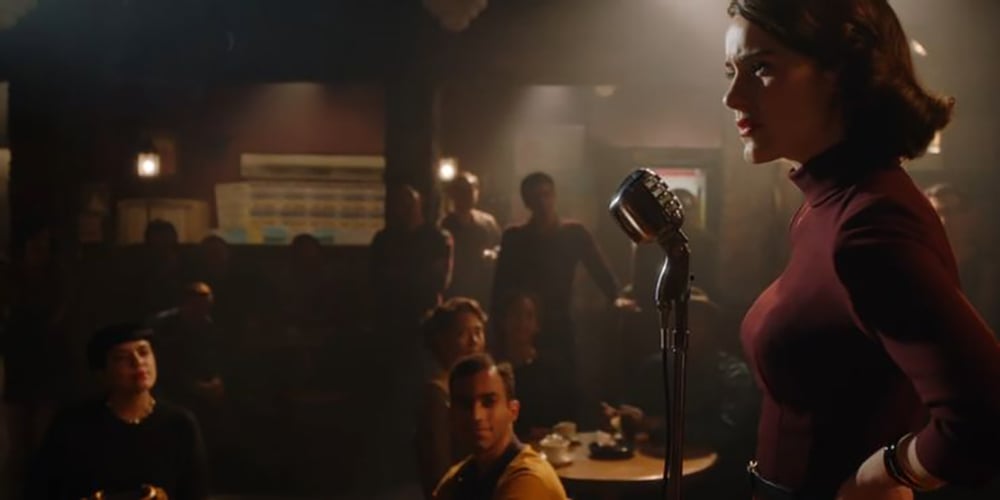 Midge uses her comedy to expose sexism and shed some light on women’s complicated relationship with heels in a hilarious set.

“You know the saying, ‘Walk a mile in a man’s shoes?’ I mean, think about that. The perspective that gives you. Well, I took it to heart, put on a pair of my husband’s shoes, and, my God, were they comfortable. I get it now, why men rule the world . . . no high heels. They can walk faster, and their backs don’t hurt,” she quipped, then announced that she was divorcing her husband but keeping his shoes. 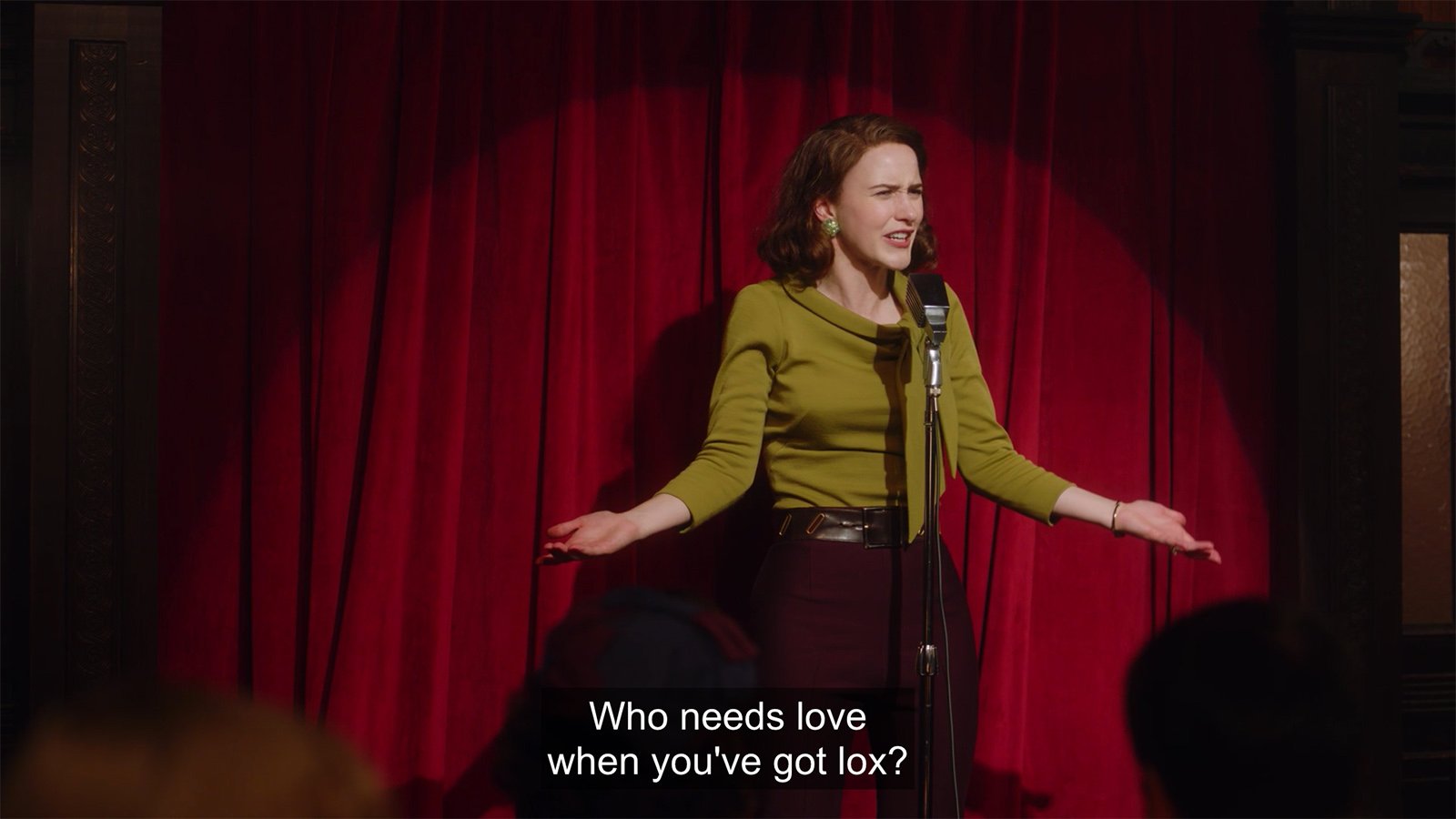 Being a comedienne in the late 50s and  meant Midge faced sexism. In “Mid-way to Mid-Tow”, Midge was bumped several slots, to the point she smeared mustard all over her dress from hunger & exhaustion. But when she finally took the stage, she tore into the bullies that went before her.

“It’s midnight on a Tuesday and the highlight of their evening is the possibility of seeing a chick fail,” said Midge as the crowd burst into laughter. “Comedy is fueled by oppression, by the lack of power, by sadness & disappointment, by abandonment & humiliation. Now, who the hell does that describe more than women? Judging by those standards, only women should be funny. And Stan,” she concluded. 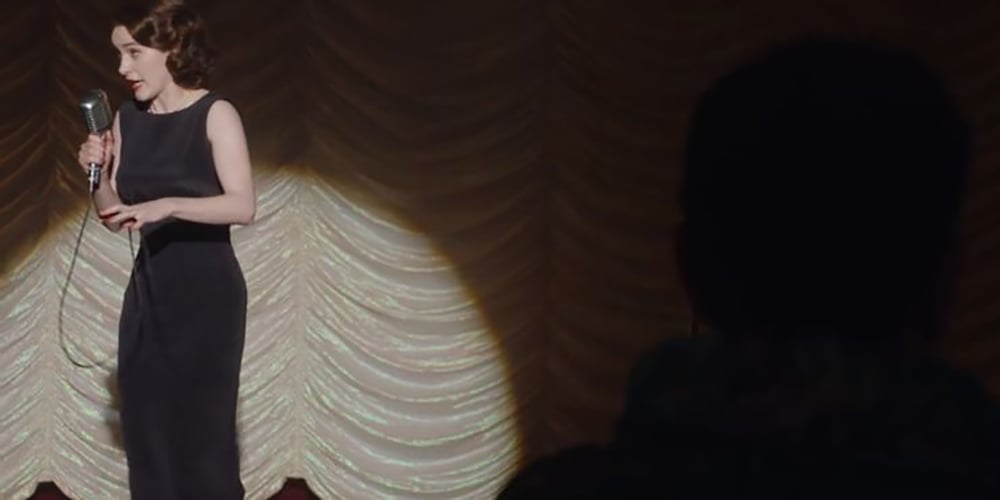 In “Midnight at the Concord”, Abe Weissman (Tony Shaloub) was shocked to see his daughter, Midge, do a blue act. Seated amongst a crowd of old & young people, he heard his daughter riff on aspects of her sexual life.

Abe was embarrassed to hear Midge say, “I don’t think I’ve ever said the word sex in front of my father because my father looks like what you’d think a Columbia professor would look like. Lots of brown and tweed and plaid and a scowl of intellectual superiority because he is intellectually superior.” 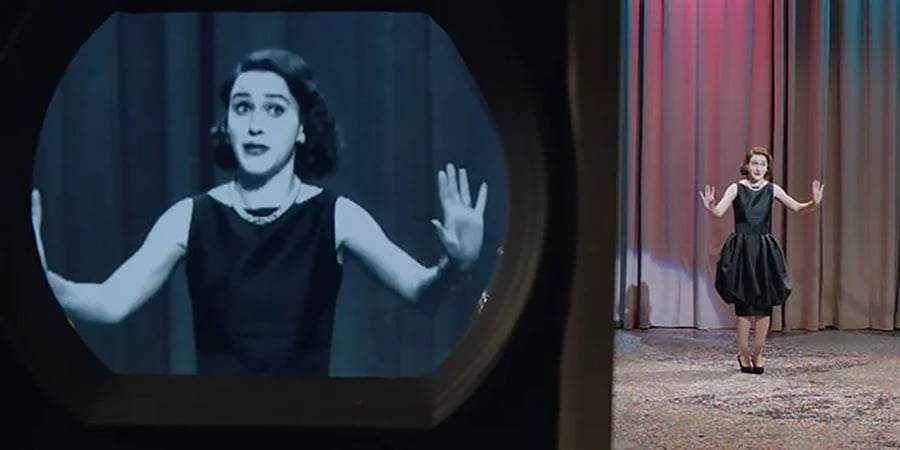 The performance that earned Midge a touring contract with famous vocalist Shy Baldwin was definitely a memorable one. She was a big hit at the third annual “Stop Arthritis & Rheumatism Telethon”. Even though Midge was bumped to the last slot at 11:55 pm, she was able to connect with the audience and make them laugh, in a way no other performer could.

“I talk to people for a living. Not that I’m making a living. Really, this whole comedian thing was all just a ruse to get on this telethon today. Mason, I’ll take that $78,000 now in small bills. Arthritis be damned,” joked Midge as she left the audience in stitches.