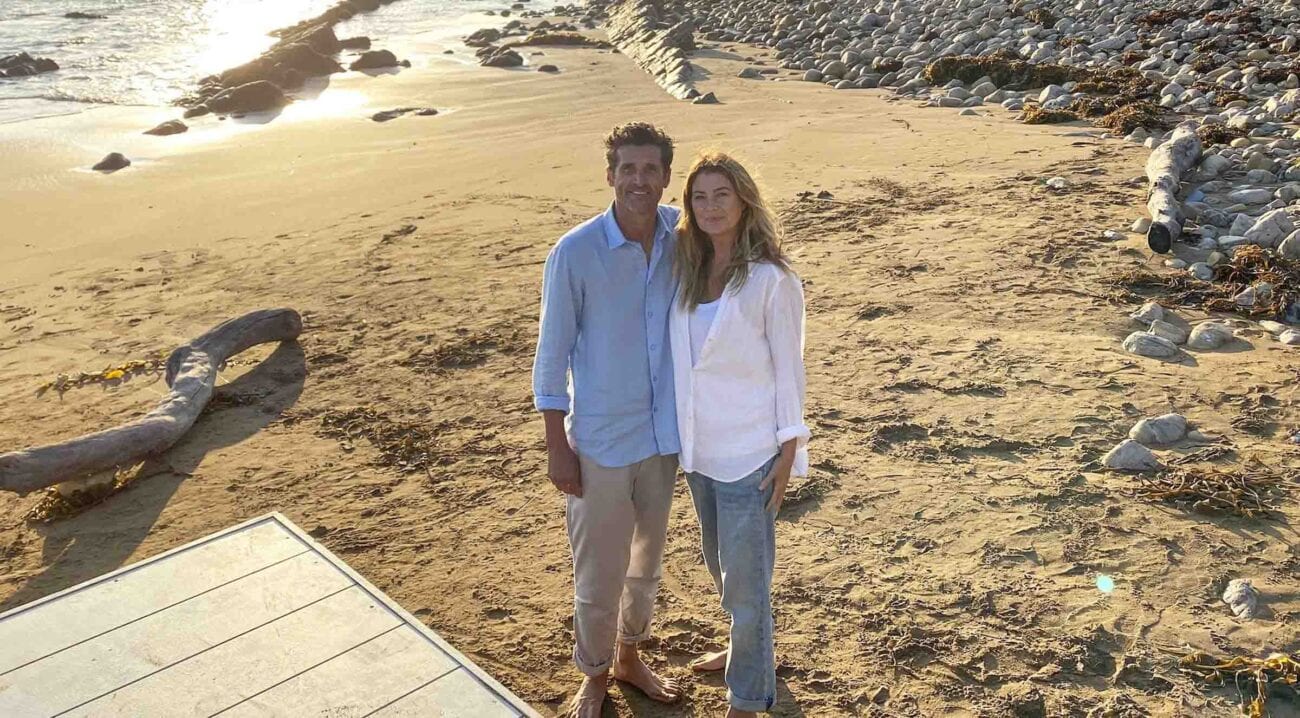 ‘Grey’s Anatomy’ season 17: Is McDreamy coming back for good?

Dr. Meredith Grey may have COVID-19 & McDreamy returns. It’s all in a season 17 day’s work on ABC’s Grey’s Anatomy. 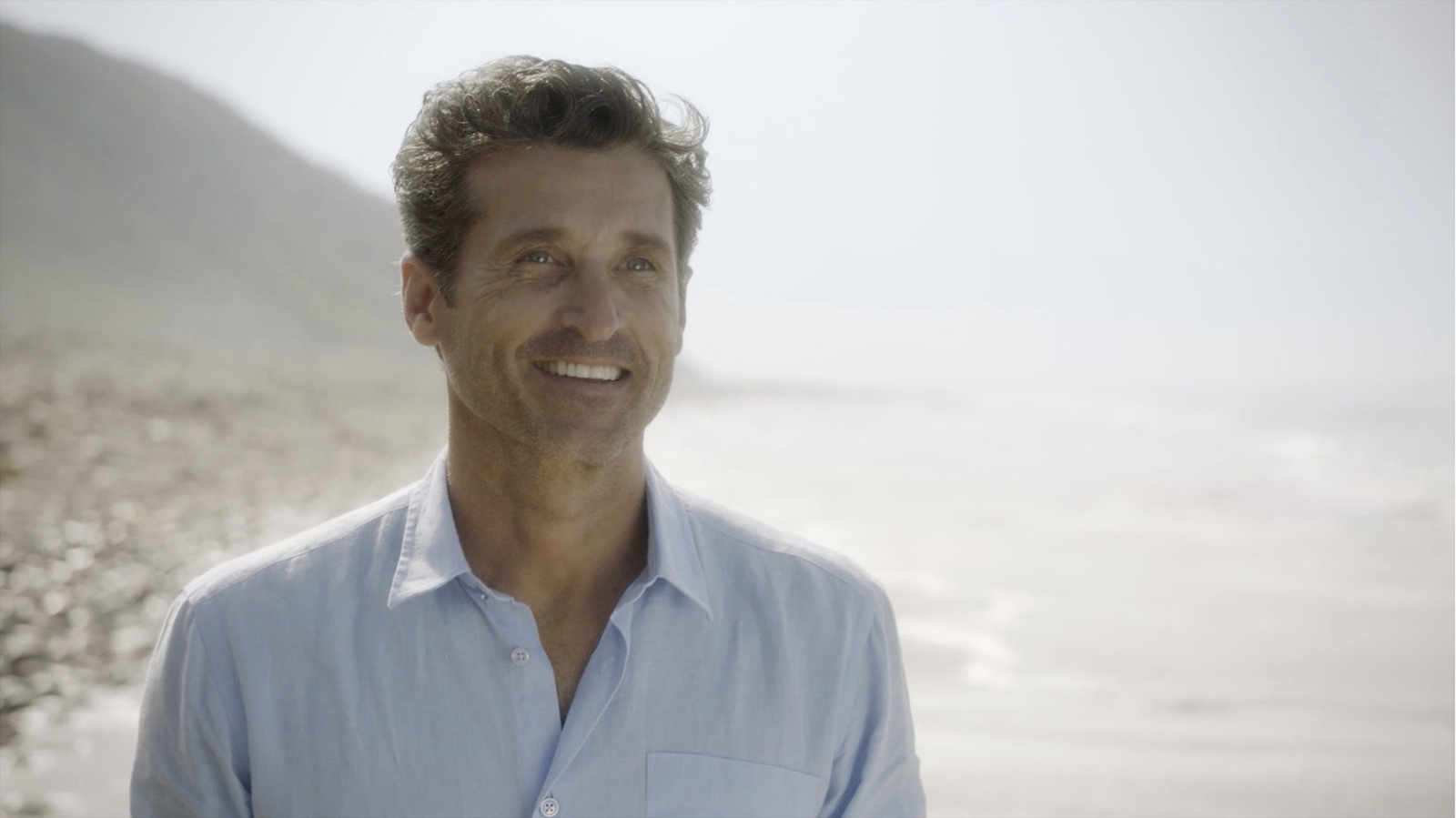 A spark of joy in the darkness

Thursday November 12, 2020 marked the season 17 premiere of Grey’s Anatomy, which  ended with leading lady Ellen Pompeo’s doctor passed-out in the hospital parking lot before seeing a vision of her late husband, Derek, as original star Patrick Dempsey returned to reprise his role.

In one of Grey’s Anatomy’s biggest twists ever, a beloved character, Patrick Dempsey’s Derek Shepherd, whose tragic death in an April 2015 episode left fans heartbroken, came back. Appropriately, the late McDreamy appeared in a dream sequence, joining Ellen Pompeo’s Meredith Grey on a beach seconds after Meredith collapsed in the parking lot of Grey Sloan Memorial in the season 17 premiere.

The sweet Meredith-Derek reunion was the joyous coda to an emotional two-hour season premiere of Grey’s Anatomy’s 17th season, dedicated to frontline healthcare workers, which marked the conclusion of a Station 19 crossover. 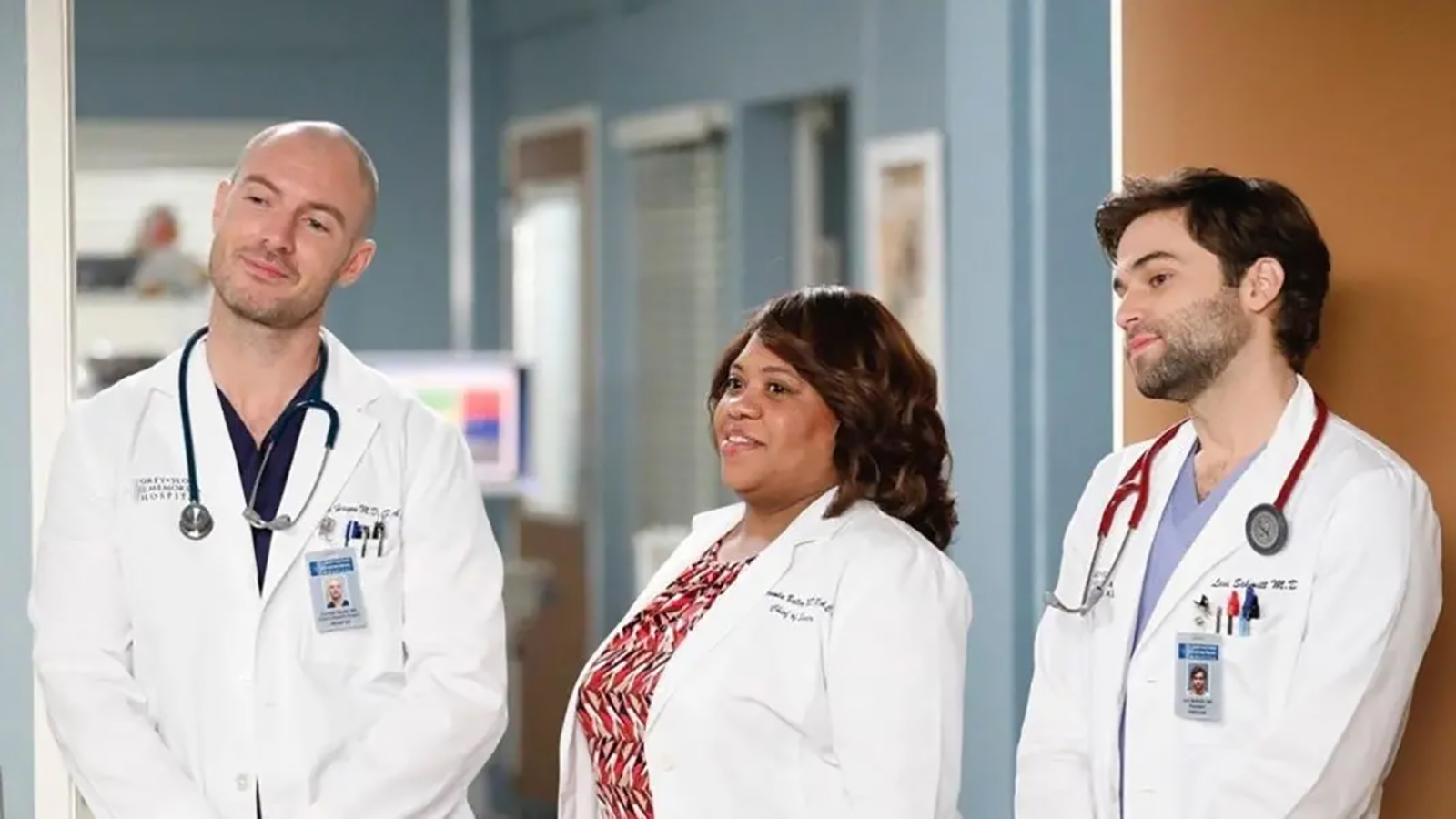 “The most important task we had this season was to honor the reality of this global pandemic and the impact it’s having —particularly on healthcare workers,” showrunner Krista Vernoff said in a statement after Thursday’s Grey’s Anatomy episode aired on the East Coast. “Along with that we had to come up with creative ways to allow our show to still be fun and romantic and provide some escapism.”

“Enter Patrick Dempsey,” Vernoff told THR. “The beach motif — which will continue beyond the premiere — provided a way for us to live outside the pandemic even for a little while here and there.” While Vernoff stopped short of confirming if Meredith (Pompeo) has COVID-19, such a diagnosis would make sense given that season 17 of Grey’s Anatomy was dedicated both by the show and by the actress herself to healthcare workers. 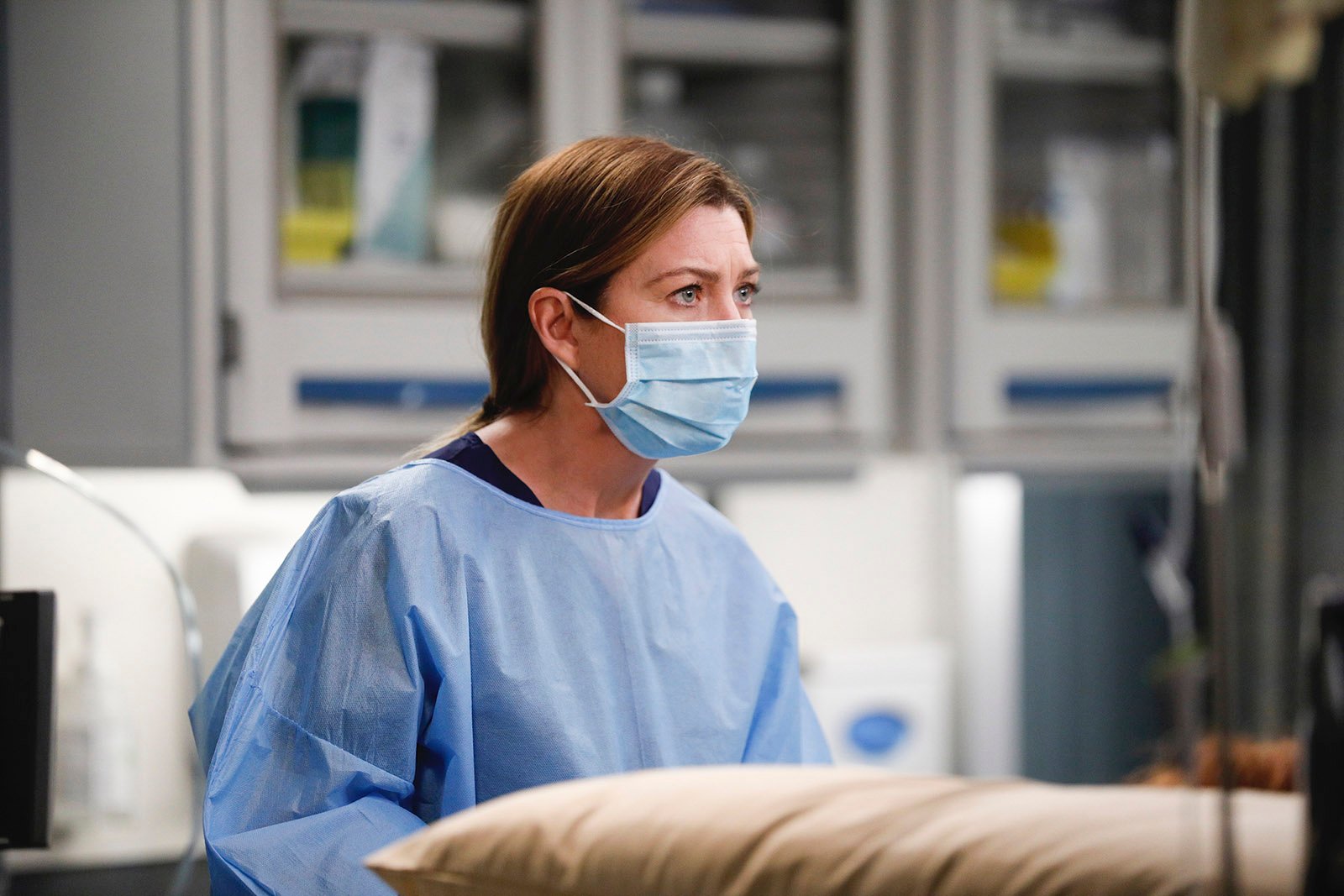 Dempsey’s Derek — Meredith’s husband and longtime love interest — was killed off in the Grey’s Anatomy season 11 finale. He re-appeared in the beach dream sequence during Thursday’s season 17 premiere and will return for next week’s episode, titled “My Happy Ending.”

“From a writer’s perspective, it happened because it was my job to find a way — once we determined that we were doing the pandemic — to also bring joy, & escape, & fan candy, and all the things that at Grey’s Anatomy we give people,” Vernoff told Deadline.

“We give them romance, & we give them humor, & we give them joy, and a lot of that is lacking for the medical community in this pandemic,” Vernoff continued about writing Grey’s Anatomy season 17. “And so, I was walking on the beach one day, & I was like, what if there’s a Meredith dream motif?” 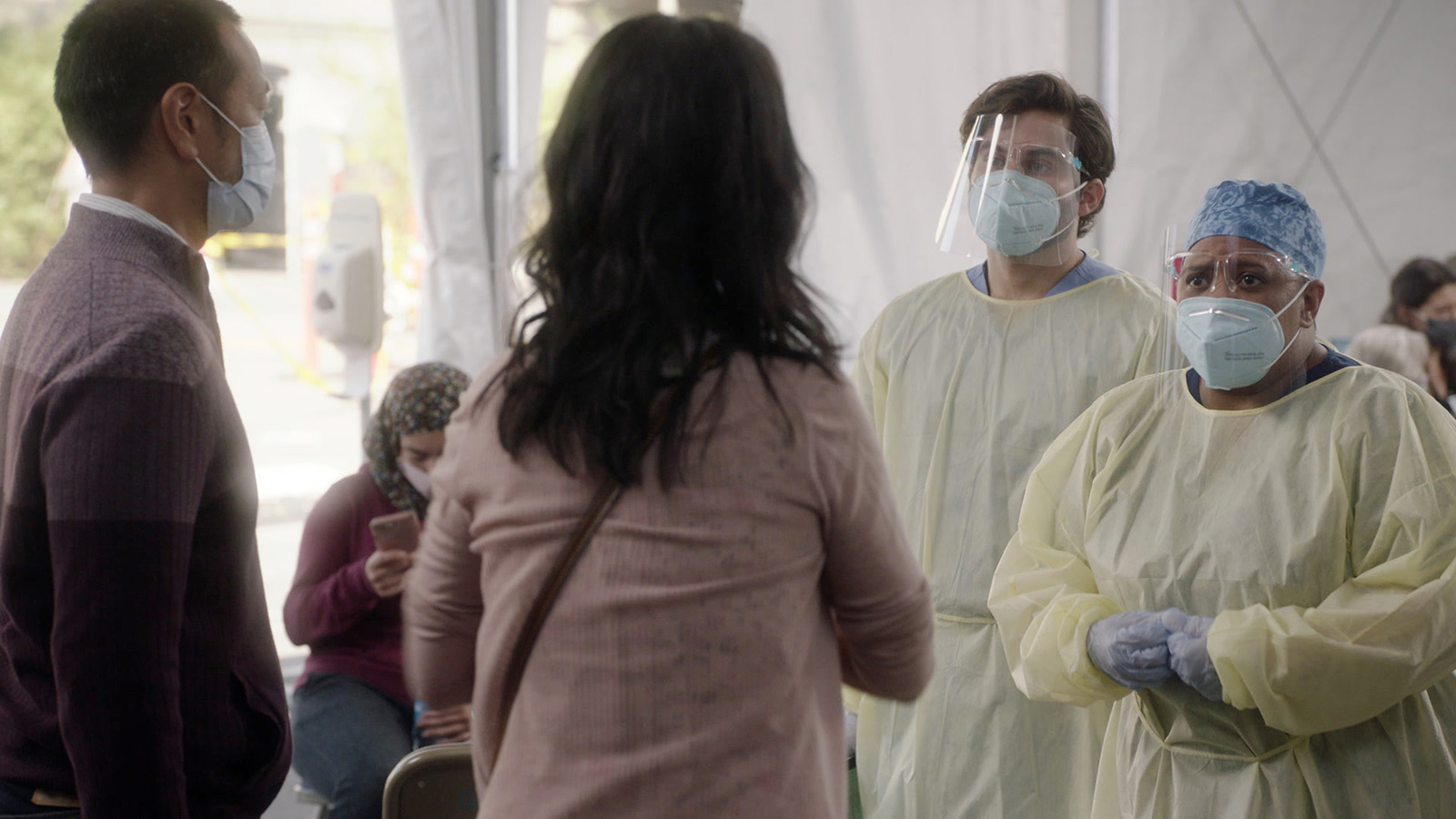 “I had this imagining of a beach motif throughout the season, & I called Ellen, & I said, what if we bring back, I don’t know, some dead character that you could dream of on the beach, that would be so fun for the fans,” recounted Grey’s Anatomy showrunner Vernoff. “And she said, ‘let’s get Patrick.’ Even in my most excitable dream life, that thought hadn’t occurred to me as an option, and there it was.”

“And Derek’s return provided pure joy for us, for Meredith, and for the fans. Season 17 has been a Herculean effort by our cast, our crew, our writers, and our partners at Disney and ABC — and we are proud of it.” Vernoff remarked.

“But our effort is nothing compared to the work of our frontline healthcare workers to whom this season is dedicated,” Vernoff explained. “We hope our show inspires you to wear your masks to protect them & each other. As Derek Shepherd would say, ‘It’s a beautiful day to save lives.’”