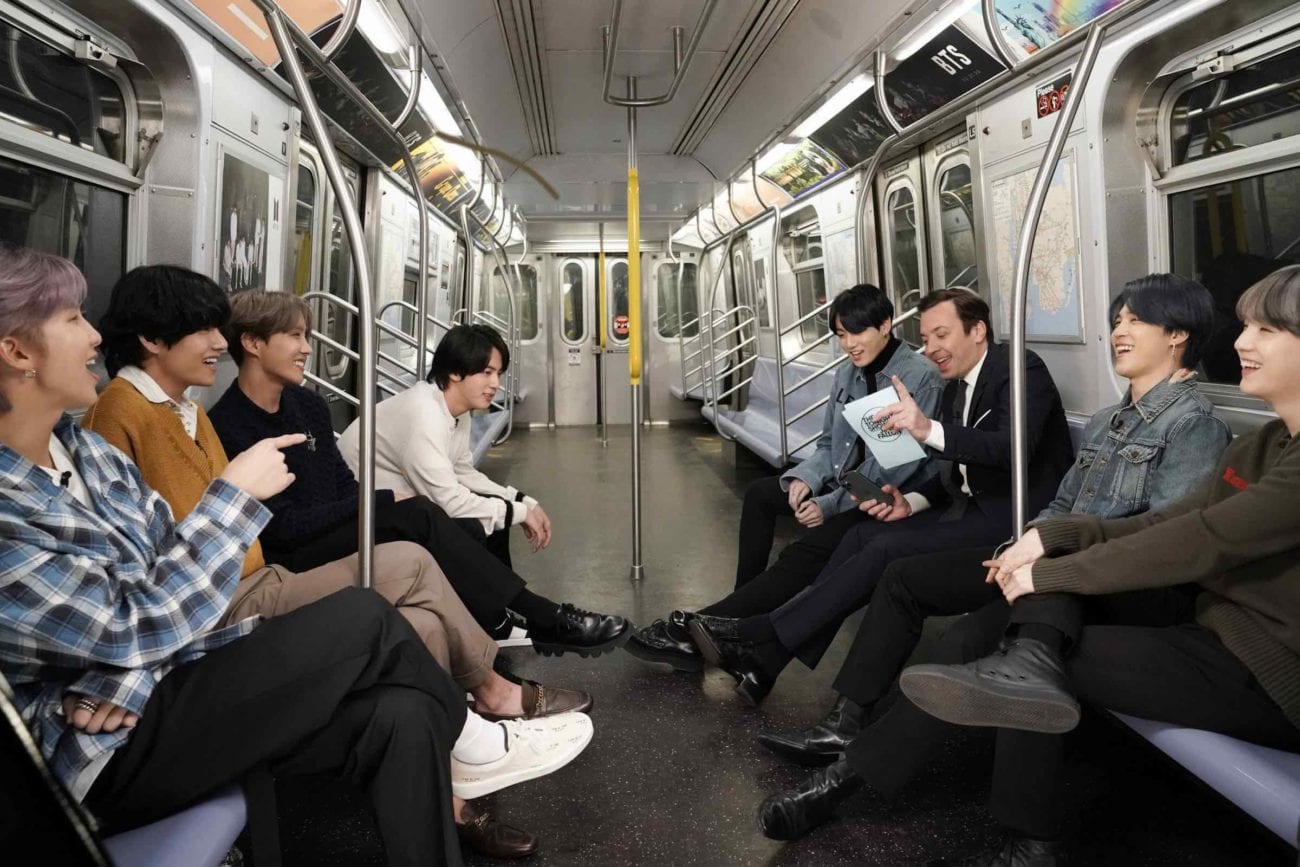 BTS are a Korean boy band also known as the Bangtang Boys. The band features seven boys of a variety of ages. Known for their baby faces, colorful hairstyles, and outlandish fashion choices, the boys have won the hearts and minds of people all around the world.

Their songs, performed in both Korean and broken English, touch on themes of mental health, loss, learning how to love oneself, and the concept of individuality. They are the most successful K-Pop band to come out of Korea and their albums have sold millions of copies worldwide. 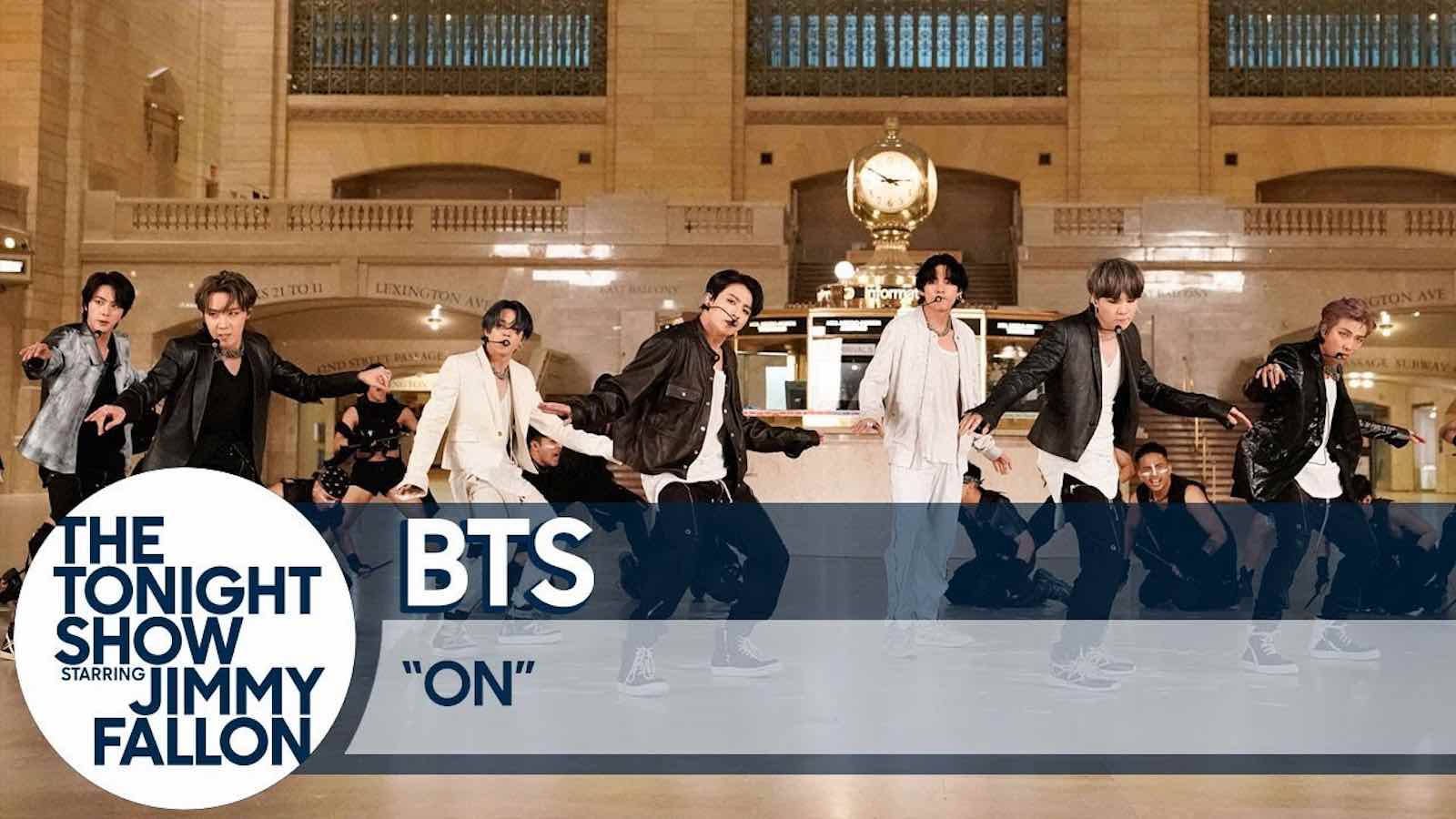 Their upcoming 2020 world tour is sold out, and their new album Map of the Soul: 7 has just gone on sale. To promote the sale of the album, the boys ventured out of Korea for a media tour. While in the U.S. they stopped by The Tonight Show with Jimmy Fallon and took over the show.

Fallon capitalized on BTS’ fame and promoted their appearance on the show for weeks. In the lead up to the episode airing, his production team boasted that they had never spent more money on an episode of The Tonight Show than they had for the BTS episode. Now that we’ve watched it, we understand why.

We’re curious . . . did you see the episode? Was it worth the hype The Tonight Show threw at us on social media? Come with us as we recap the episode and give you our thoughts. 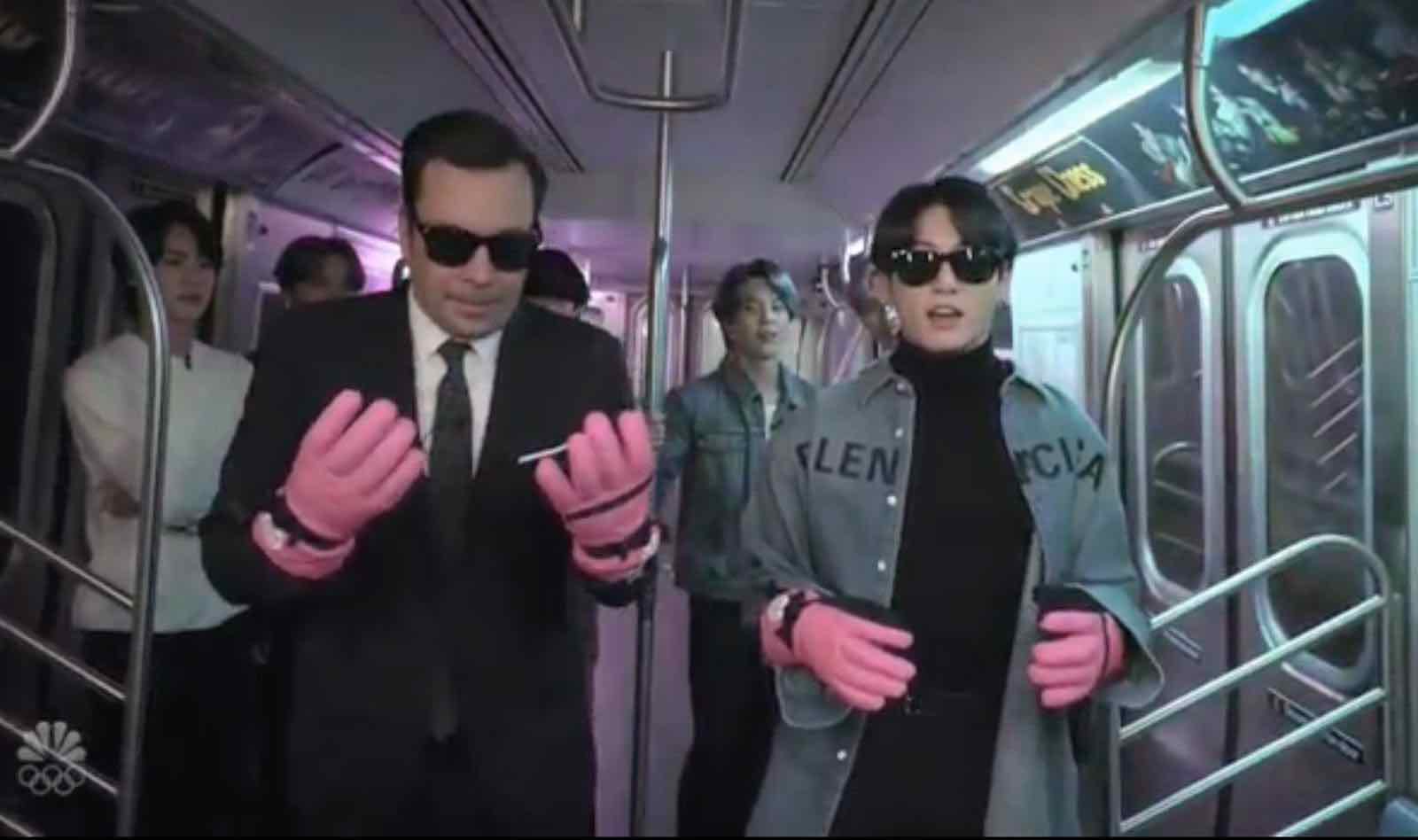 In this particular episode, the first noticeable thing that is different about this particular taping is the set. They stepped outside of their usual studio set and took the episode to the streets of New York City. The New York City subway, to be exact. Jimmy Fallon and his team brought a live studio audience and his production team aboard the F train below Rockefeller Center.

On first inspection, it appeared as if the show was just taking place in a train car down in the subway. However, more careful examination of the set design reveals that the train is, in fact, moving. 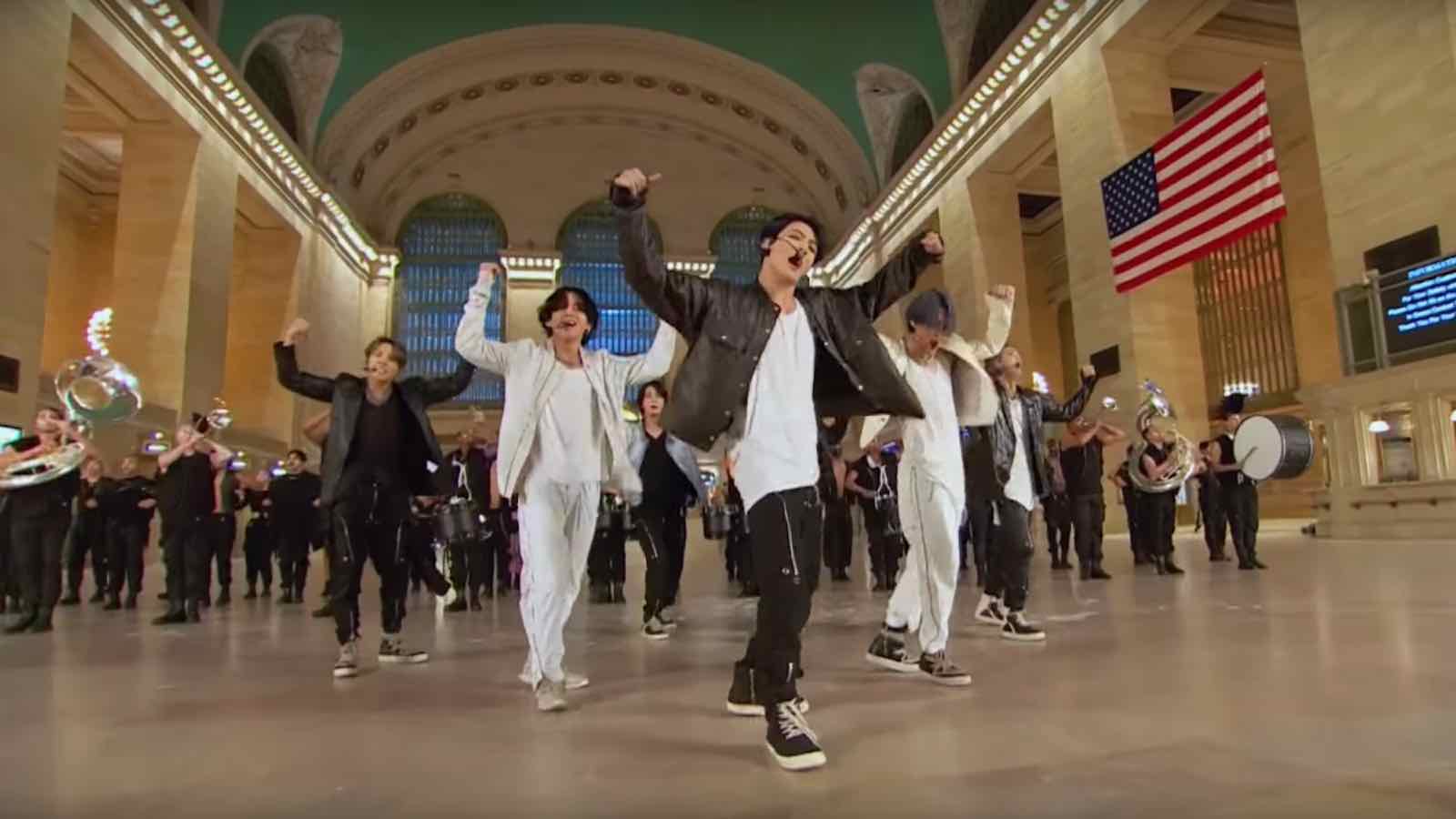 Fallon crammed a live audience, his in-house band The Roots, and whatever production crew he needed onto a moving train and literally hosted a television show as it travelled around New York City.

Later in the show, The Tonight Show closes down Grand Central Station so BTS could perform, and he also takes the band to the restaurant where the famous scene from When Harry Met Sally was filmed. The cultural significance of this seems lost on the boys, though, as none of them appear to have heard of the movie. 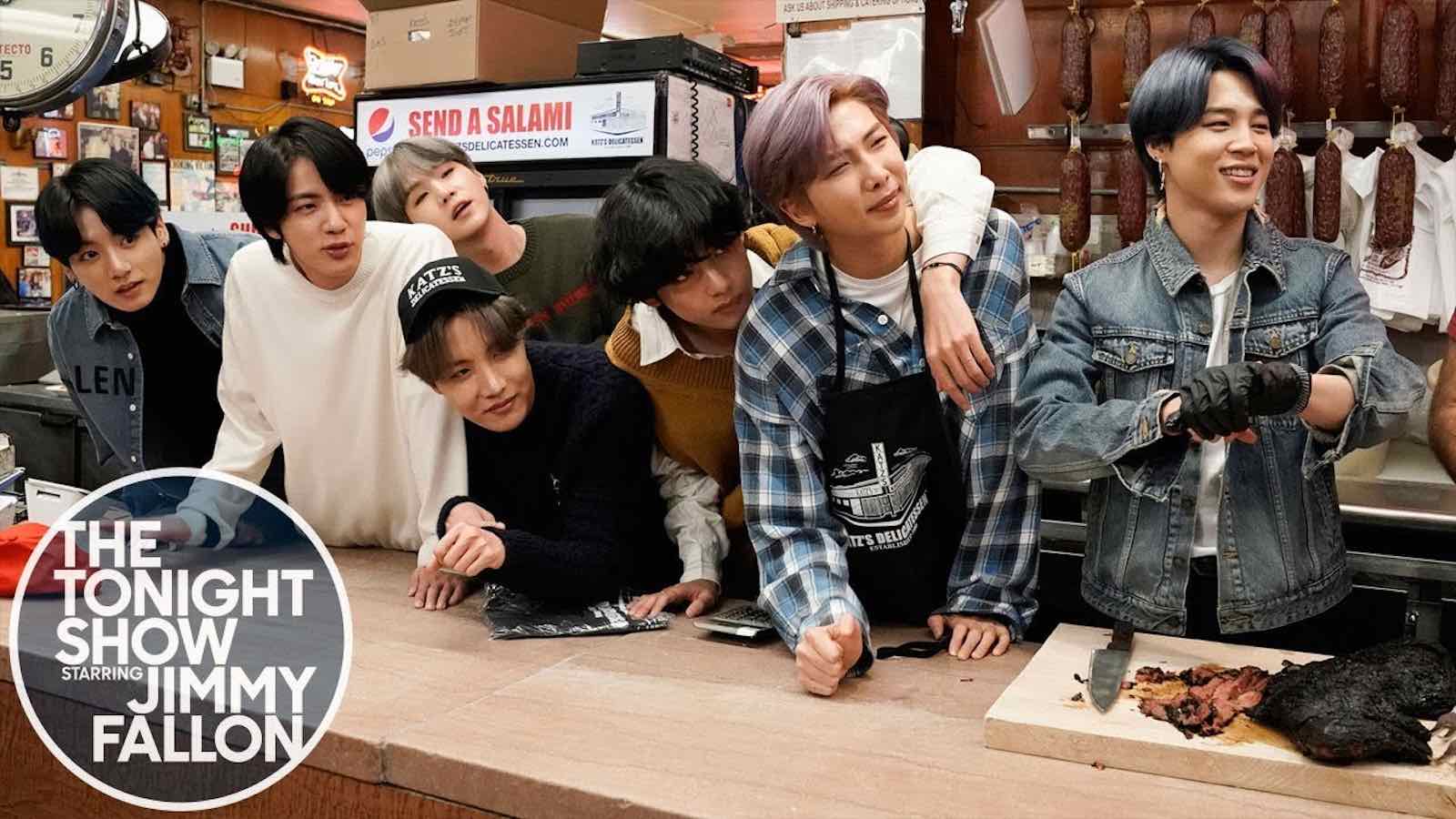 What we learn about BTS

When the 7 members of the band board the train, there is no audience present. Initially, it’s just Jimmy Fallon and the band chit-chatting, clearly playing catch up. If you’ve been following BTS for a while now, some of the things they say in this initial segment may not be new to you, but as they begin talking about more recent issues impacting their lives, viewers will definitely experience new information from the boys.

They talk about all the things they love about New York City, and the fact that they can’t believe their band is so successful worldwide. They humbly discuss the fact that they come from a small Asian country that speaks a different language, yet the international community has welcomed them with such open arms. J-Hope positively glows as he tells Fallon how lucky this makes him feel.

Fallon then asks, before BTS existed, what did each member of the band see themselves doing with their lives. RM, who we all know is the responsible dad-like figure of the group, answers that he wanted to be a businessman. Somehow, this doesn’t seem so much of a surprise to us at all. 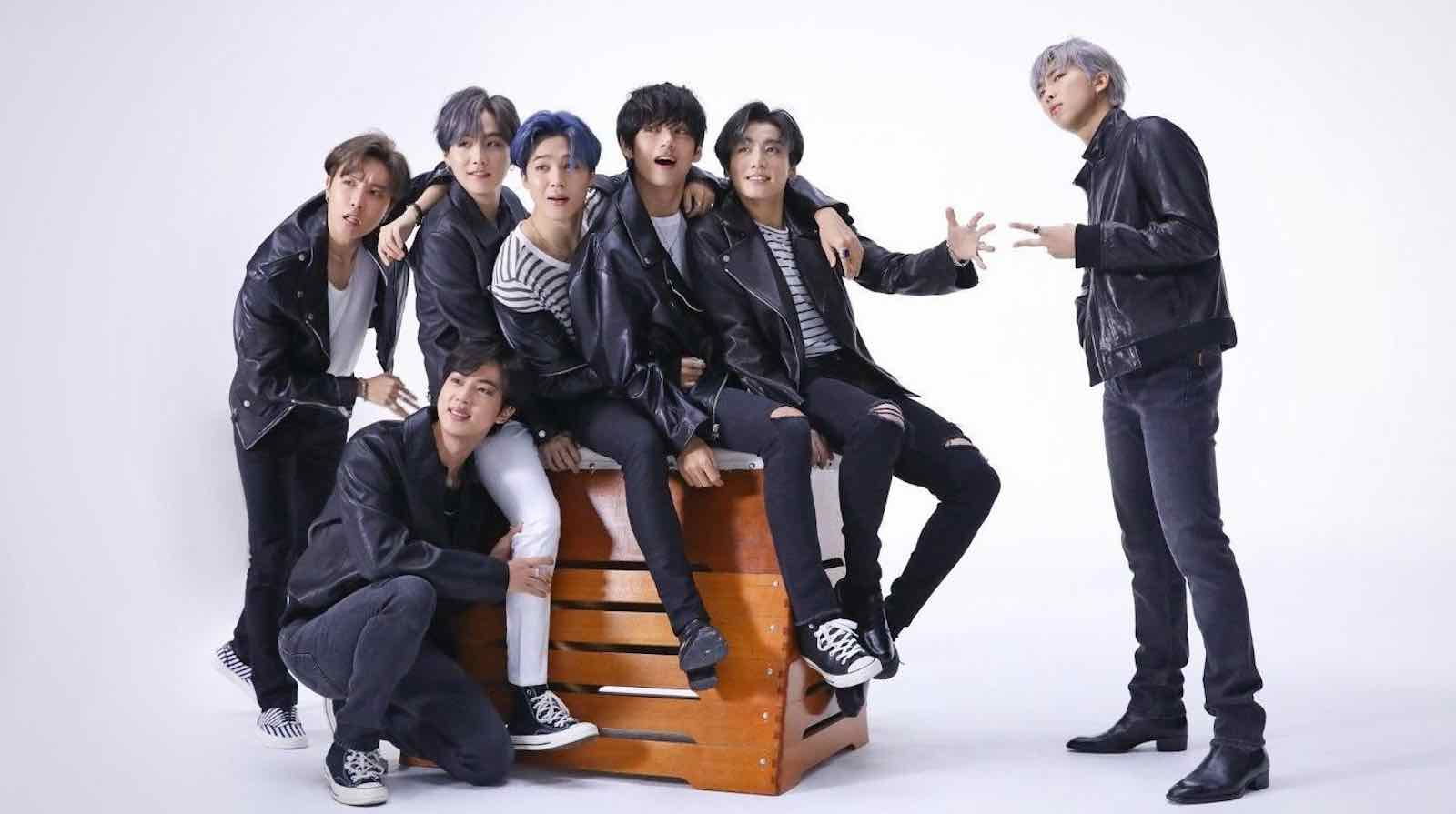 V floors Fallon when he says that he wanted to be a saxophone player and automatically asks his staff if they have a saxophone on hand. We’re very disappointed to report that there was no saxophone on the train, and therefore, we did not get to witness V attempt to swoon us with his musical prowess.

J-Hope jumps out of his seat at this point as Fallon breaks into a verbal rendition of the saxophone portion of George Michael’s Careless Whisper. Just when it looks like J-Hope is about to unleash some of his famous chaos upon us, Fallon asks him what he wanted to do before BTS. J-Hope responds that he wanted to be a tennis player and sits back down again. 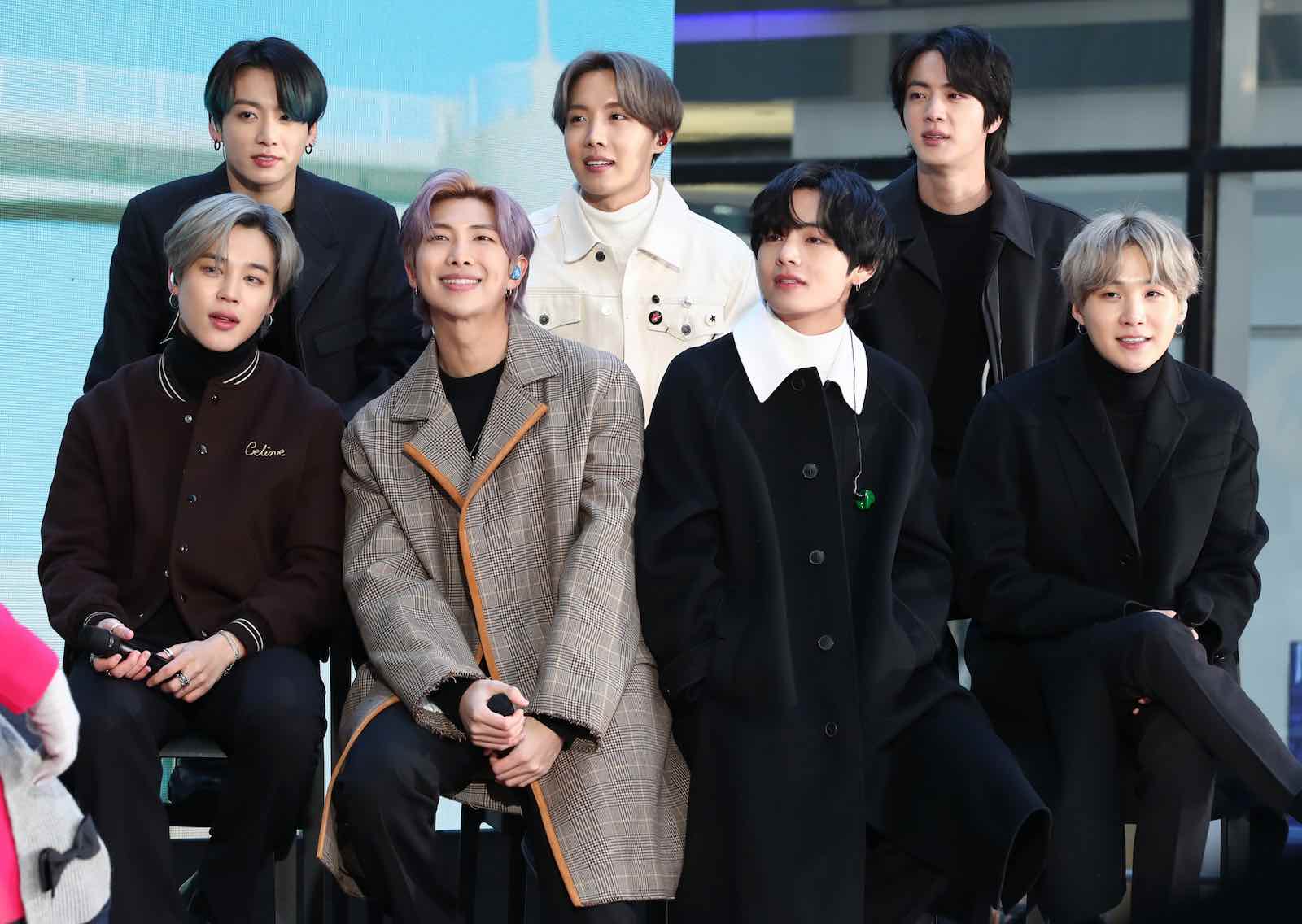 Thank god none of that actually happened, and we ended up with BTS instead. 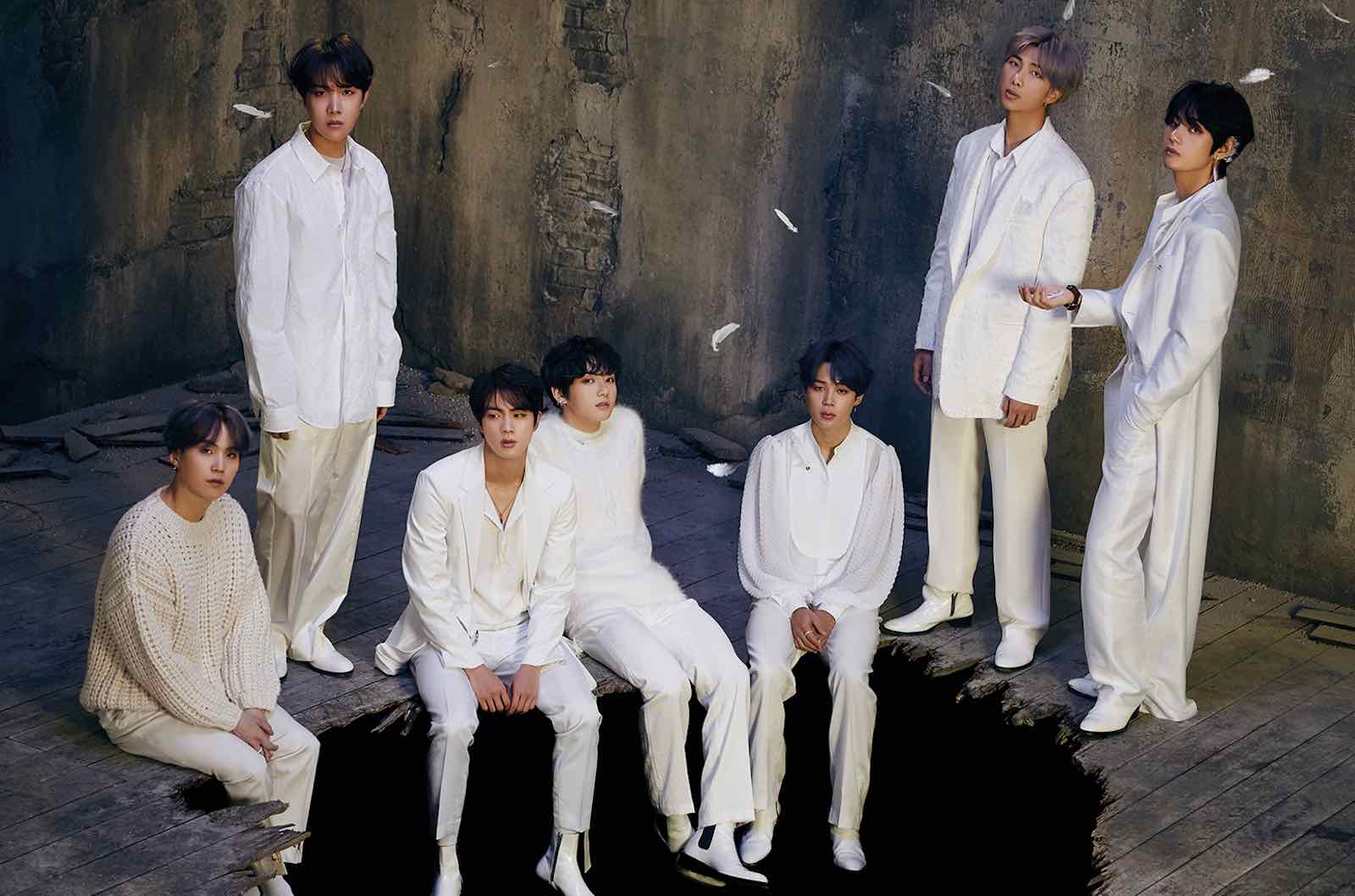 Fallon asks about the significance of the album title. RM explains that seven is a lucky number, there are seven members in the band, and they’ve been together for seven years. They discuss the significance of some of the tracks and talk about the themes present within the album. RM does most of the talking here.

Fallon wants to know why the boys think their music is so popular. Considering the language barrier, it’s a good question. Suga tells Fallon that he thinks they sing about themes and issues that teens, twenty-somethings, and even thirty-somethings can relate to and this is why their fanbase is so diverse and strong. 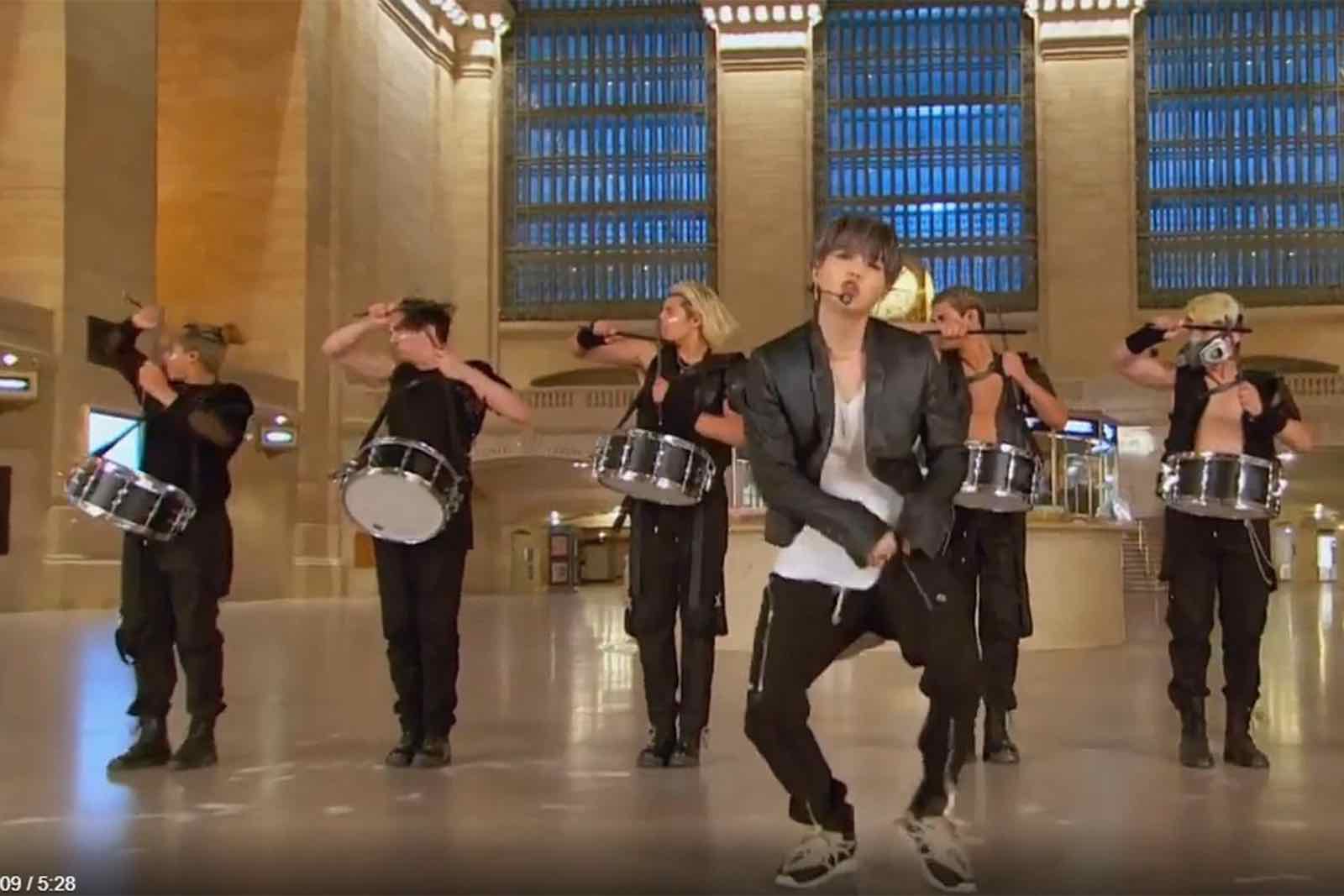 During the ‘Subway Olympics’ Fallon had the boys battle against each other in pairs in a variety of ludicrous scenarios. During this segment we see some of the usual chaos that the BTS boys are known for. As J-Hope was trying to knock a rubber duck off of Jin’s hand (yes, you read that right), he smacked Jin in the face instead. Their reactions are priceless.

Another notable mention during this segment was the Post-It challenge. The boys were separated into two teams and the team that posted their assigned member with the most sticky notes one. We couldn’t help but notice the way J-Hope plastered sticky notes all over Jungkook’s junk, if you know what we mean. Ahem, boys! Right in front of our salad!

Lastly, as previously mentioned, The Tonight Show did something unprecedented & managed to close down Grand Central train station so BTS could perform there. Fallon boasts how this had never been done before in television history, and we have to admit, it was rather impressive indeed! 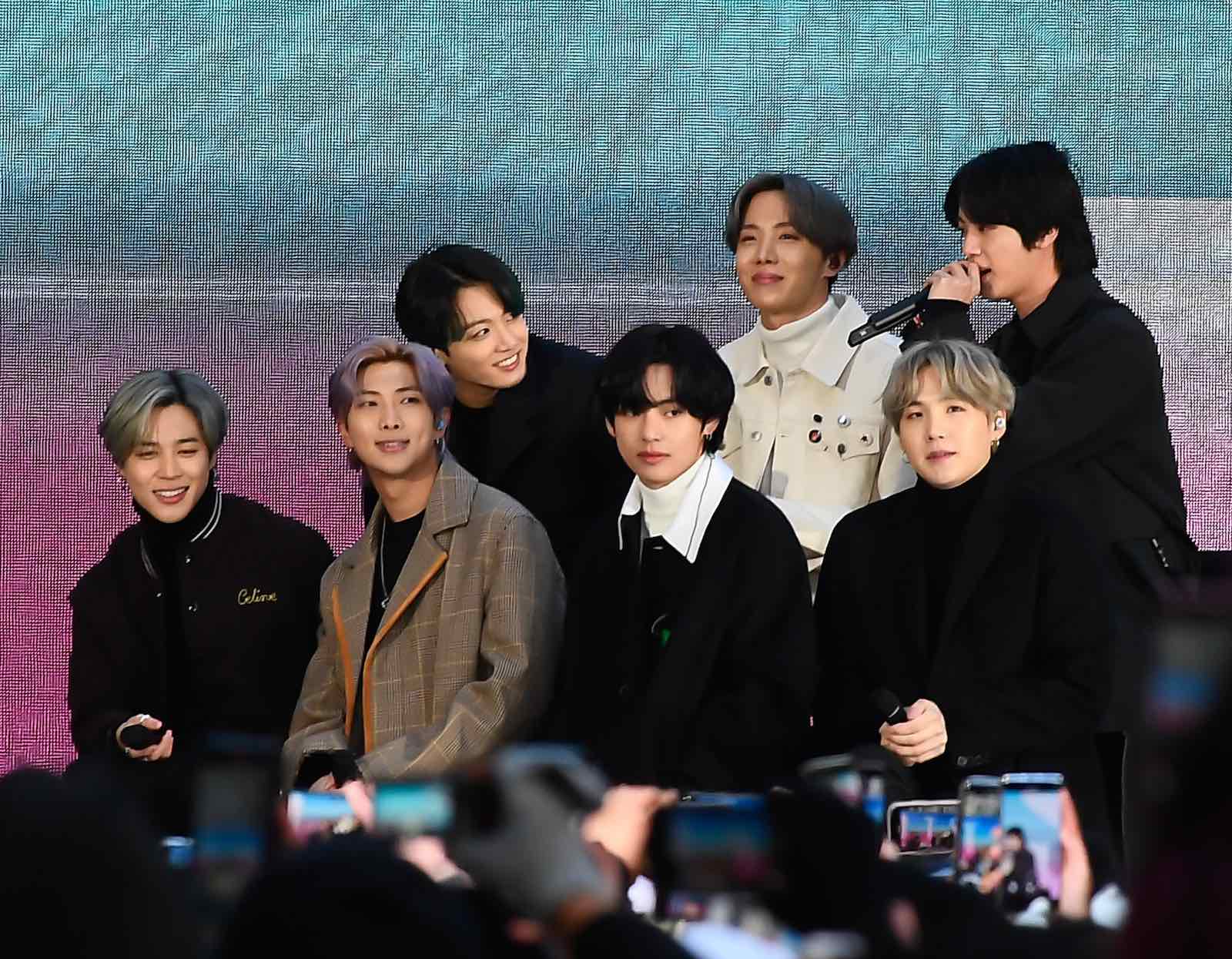 Part of the BTS charm, and a huge part of why everyone loves this particular boyband over other K-Pop bands, is the relationships they’ve developed and all the mischievous shenanigans they get up to. It’s why fans flock to the internet searching for videos of their antics in interviews and when they’re just hanging out together.

They rarely disappoint & usually, the level of chaotic behavior among the group runs high. This time, however, while their energy was definitely obvious, they were all on their best behavior. We couldn’t help but wonder if RM-Dad-Of-The-Group sat them all down beforehand and gave them a good talking to. We wished he hadn’t, for it’s the craziness that we show up for time & time again! 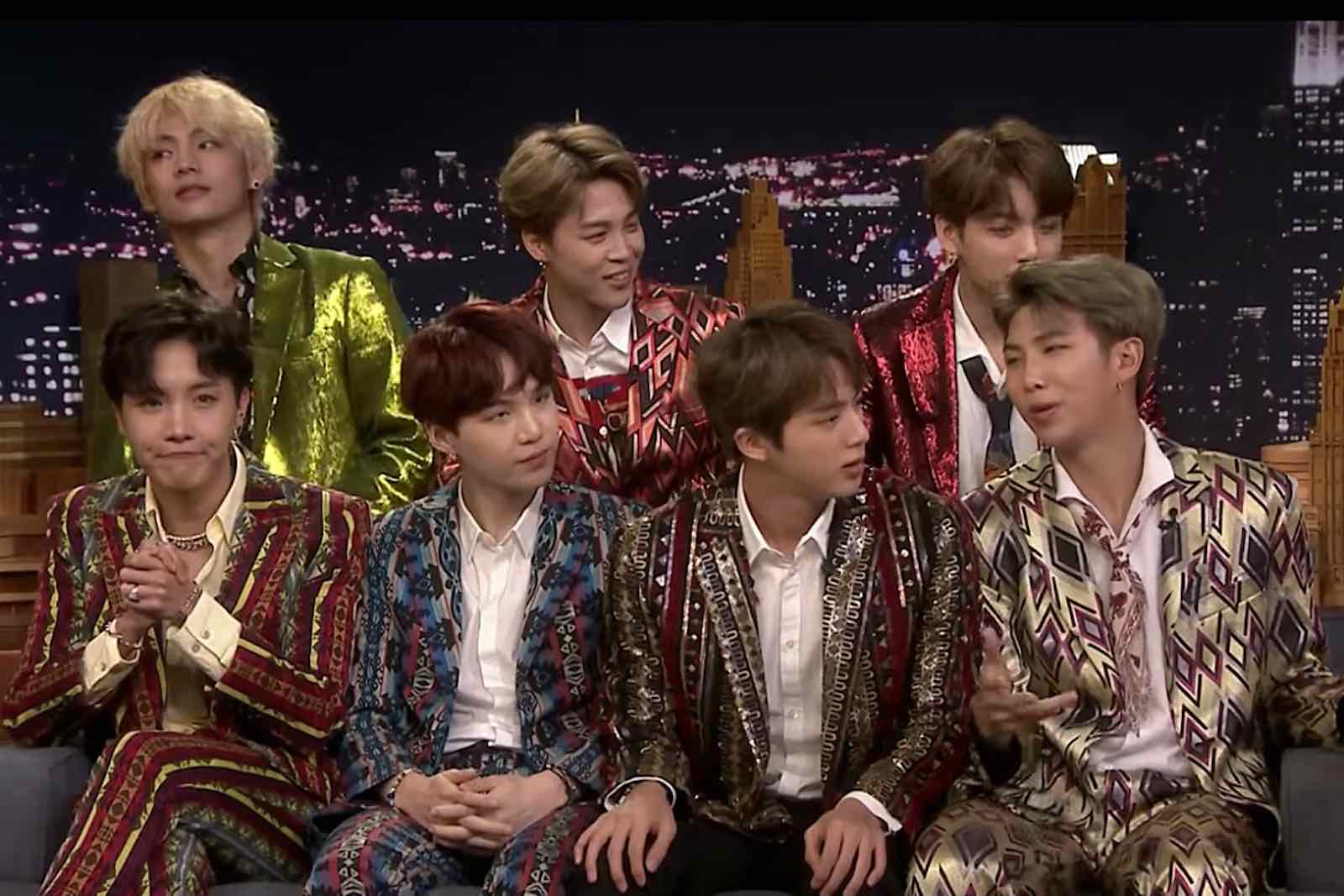 Lastly, BTS fans report that they’re always so excited to see what the boys will be wearing. Their fashion choices have become a huge part of their image, and the boys often wear outfits that challenge the parameters of gender norms. Their androgyny is definitely part of their appeal.

This was definitely missing from this episode. Their fashion choices didn’t really speak to their usual personal choices. Even during the performance, where they did make a wardrobe change, their outfits were safe choices rather than regular BTS style.

So what did you think? Did you watch it? Drop us a comment and let us know!