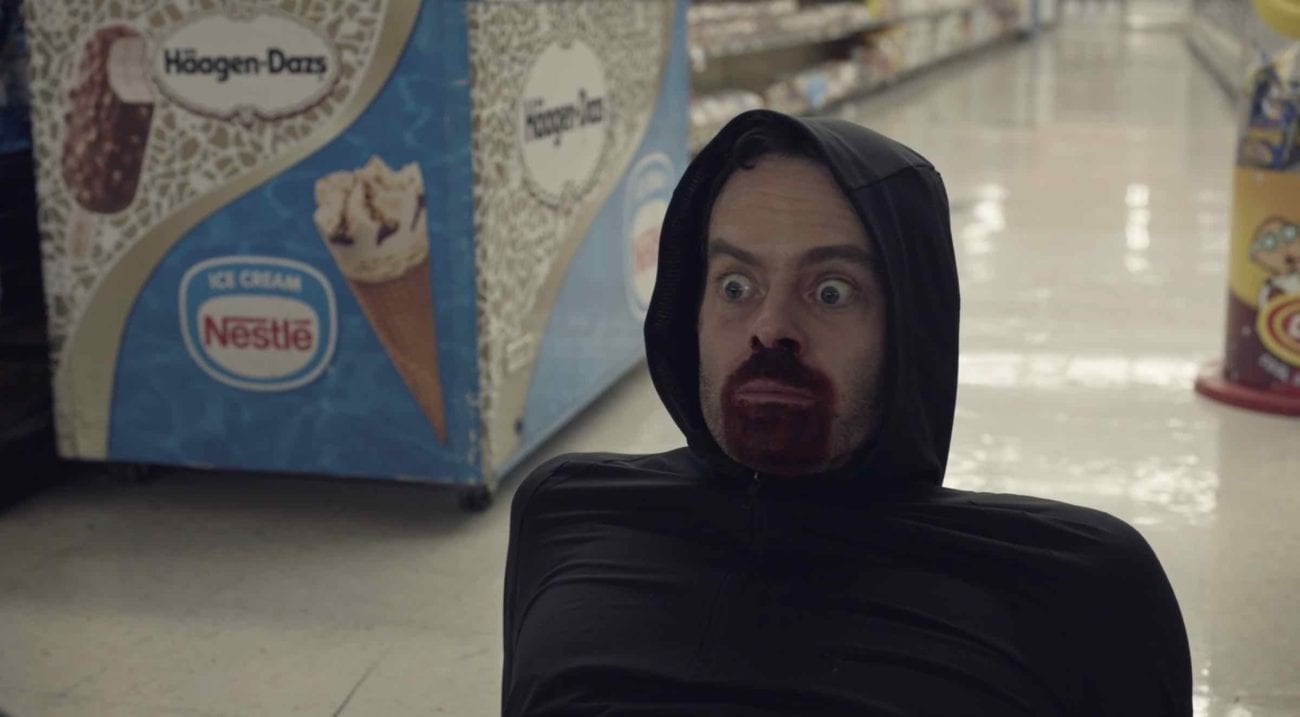 When the last episode of Barry ended, we knew things were about to get real ugly, real fast after we discovered the true intentions behind self-serving Detective Loach and his devious plan to kill his ex-wife’s boyfriend.

Our money was on the detective being dead by the end of episode five, which we expected would be about blood & betrayal. It ended up being about just that, but not in the way we thought.

We’re going deep into “Ronny/Lily”, so be warned: there are many spoilers ahead.

The title card flashes up onto the screen with no other introduction before a new character appears driving a muscle car into a driveway. He’s going into a house, getting ready to relax with a six pack in one hand and a joint in his pocket. The steadicam warns us of impending doom via surveying the room’s eerie available space: suburbia, check; altered state, check.

This could be the work of John Carpenter, but it’s not. This is Barry, a show about a hitman, and we’re pretty sure we just met the guy Barry is meant to kill next. 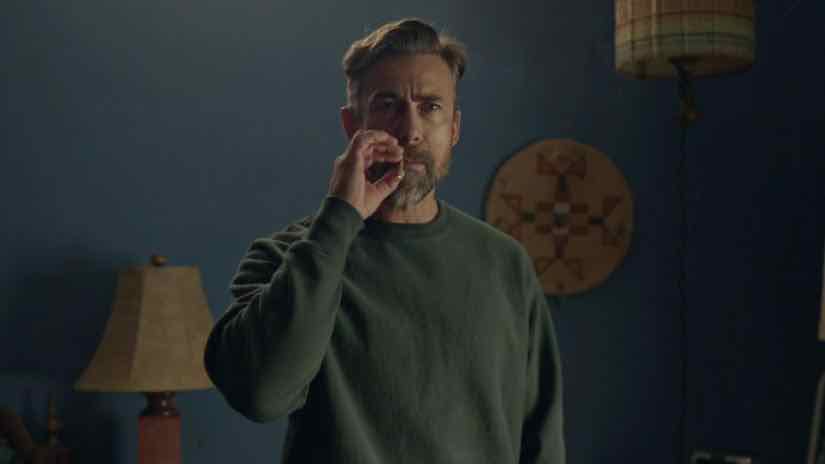 Yup, this strange man with the hideously decorated house is none other than Ronny Proxin, the same Ronny Proxin who’s banging Loach’s wife. Barry has come to see him – but he’s not here to kill him or share that joint Ronny just lit. He’s here to take him away to Chicago for at least a year till the dust settles and everyone can get out of this nasty mess alive.

As Barry informally recites to Ronny how things are going to go, Ronny is strangely, silently cooperative. The eerie quiet of the suburbs puts us ill at ease as Ronnie is packing his case. All the nonverbals tell us operation this ain’t gonna go so smoothly.

Barry masks his nerves with incredibly unmenacing chitter-chatter as he looms into the frame in assassin blacks (probably Lululemon) and a red balaclava. As we move into the adjoining room to retrieve Ronny’s other suitcase, we realize where this story is heading. The entire room is dedicated to Ronny’s success in tae kwon do, featuring dozens upon dozens of trophies, medals, and pictures. Now we realize why Ronny’s house is lacking in cogent interior design – the dude has been very busy.

Time is now our enemy and the silence is not golden as we wait for Ronny to make his move. One thing Barry does incredibly well is pace stories perfectly; just as we think we can’t take it anymore, Ronny calmly donkey-kicks Barry. Barry immediately falls unconscious and we have no freakin’ clue where this story is going to end up.

When Barry regains consciousness, melée ensues. Barry’s training impressed us in this scene as he held his own against the middle-aged black belt. When he injures Ronny’s windpipe, we think it’s game over – but the guy keeps clawing his way back. Finally, after exerting a huge amount of energy on thrashing Barry in the trophy room, Ronny collapses with a wheeze, seemingly dead. 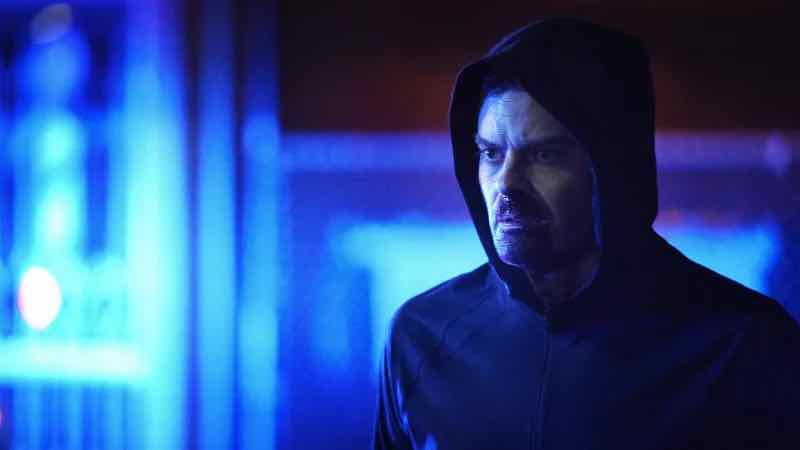 Barry pulls back his balaclava, breathes deeply, and prepares to leave. Just as he’s making it to the doorway, a girl arrives home, decked out in a white martial arts outfit and white belt. Our hearts fall to the pits of our stomachs. Barry isn’t going to have to kill a kid, is he?

True star of the episode

It’s Lily, the semi-feral daughter of Ronny who might not be “of this world” – the girl who growls like a dog, stalks the floor like a wolf, jumps over fences like she’s playing jump rope, and can climb a tree quicker than your cat. From this point onwards, we know we’re not dealing with an average episode of Barry. In fact, it might just be the best episode yet.

Lily comes on like a rabid dog, flying over the kitchen island like a pubescent Bruce Lee. Barry can’t bring himself to harm the girl during the epic kitchen fight full of improvised weapons and acrobatics. Lily finally stabs Barry deep in the back with a short knife, thrice for good measure.

Standing before her badly wounded foe, Lily realizes he’s not coming after her. She jumps out the window in a moment, vaulting fences like a racehorse.

A moment of calm

When Barry gets to Fuches in the waiting car, his old handler has only one concern – never mind Barry’s oozing blood and saying he’s dying – Fuches wants to be sure the job has been done. 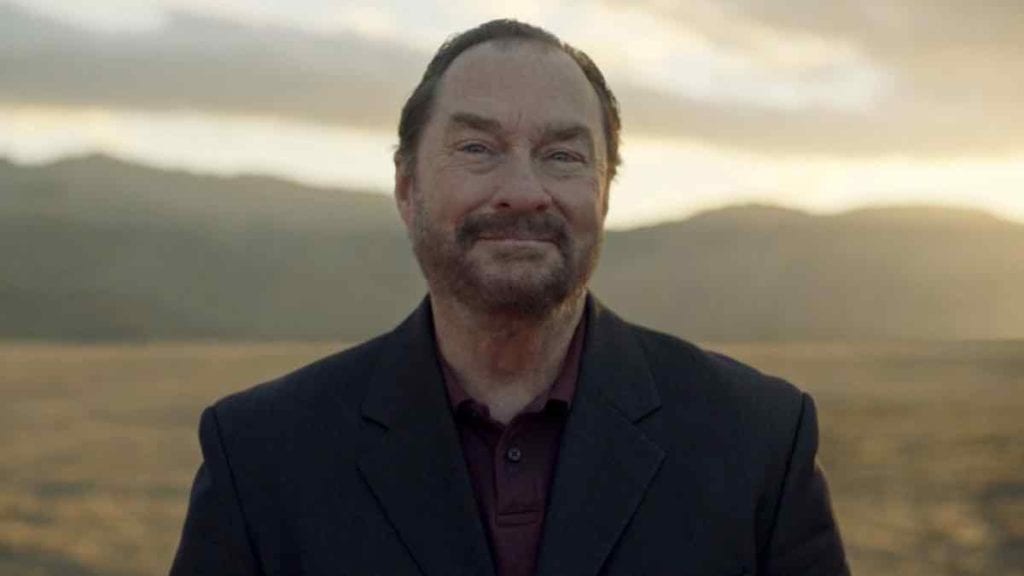 As he passes in and out of consciousness, we see Barry’s dream. He and his platoon are running towards their loved ones in uniform on a desolate desert plain – but Barry can’t see who’s waiting for him yet.

Barry comes around as Fuches drives them around the Valley neighborhood looking for first aid, and they come upon Lily sitting on the street curb. Fuches scares her and she leaps onto the roof of a house via a tree like a panther. She perches atop the suburban home’s roof ridge like a modern-day gargoyle. Fuches agrees with Barry that she’s indeed “not of this world”. 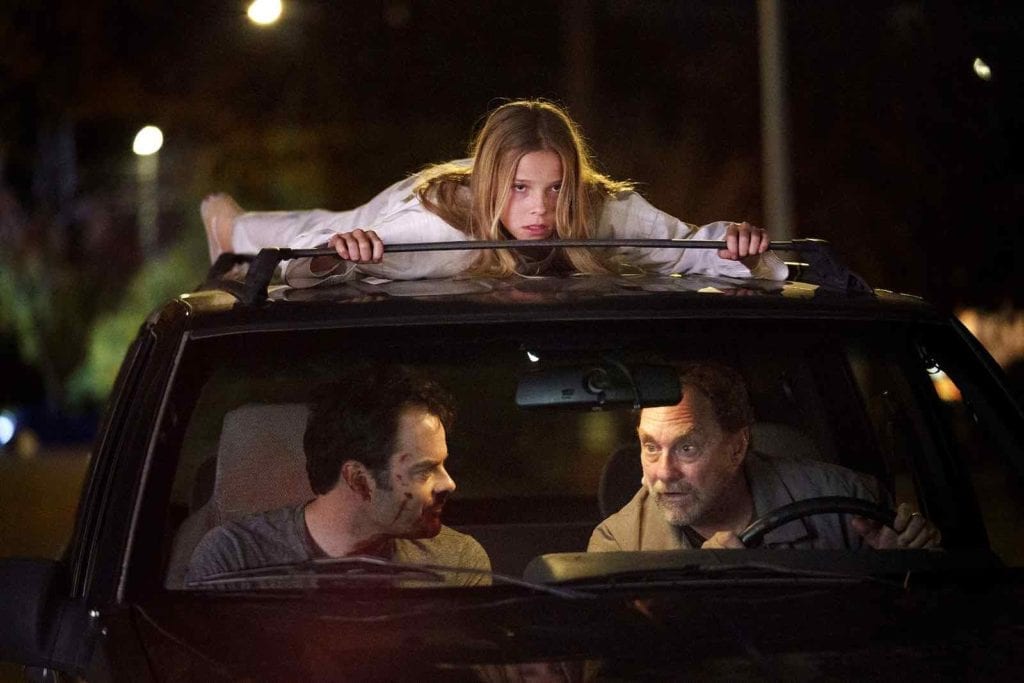 Lily’s not going to be a victim, and in one of the best shots in the show so far, we see her on top of their Ford, a vision of pure gothic horror. She sneaks inside the SUV and clamps her fangs into Fuches’s cheek; he begs Barry to shoot her off but he refuses. Lily escapes, leaving Laurel & Hardy alone and covered in blood.

Barry passes out again back to the desert plain. The crowd parts to reveal Fuches is the one waiting to pick up Barry – but there’s no rosy glow in the frame of their reunion, despite Barry’s relief. Maybe he has realized Fuches is his personal devil, who made his mind and can break it if he wants.

I wouldn’t want to clean this mess up

Next stop is a posh grocery to gather medical supplies. Fuches is now further impaired: the superglue he applied to Barry’s knife wound with his hands has rendered him stuck to the steering wheel. 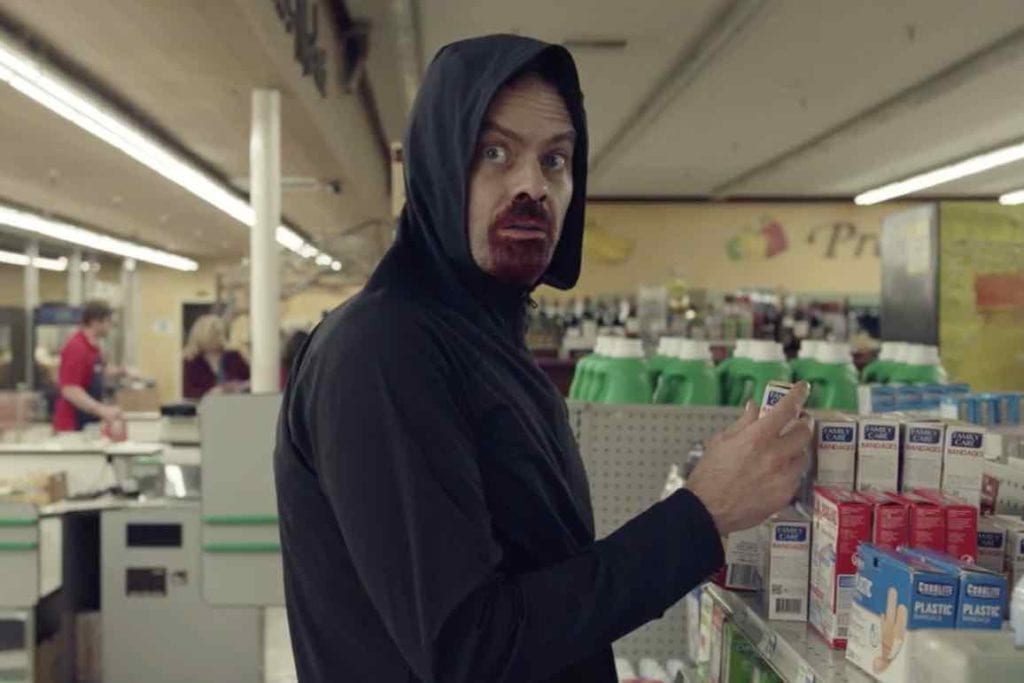 Barry looks very rough in his hoodie, covered in blood and with dark saucers under his eyes from blood loss. As he browses the aisles, he makes a terrifying discovery: Ronny is alive & well, shopping for his injuries in the self-same store.

Barry tries his Chicago line again, and Ronny reacts the same as last time. Merchandise is flung everywhere in the ensuing brawl, shoppers evacuate, and the cops are coming. Ronny finally gets the upper hand, and just as we think Barry has finally bitten off more than he could chew, the cops race in and Detective Loach shoots Ronny in the head. 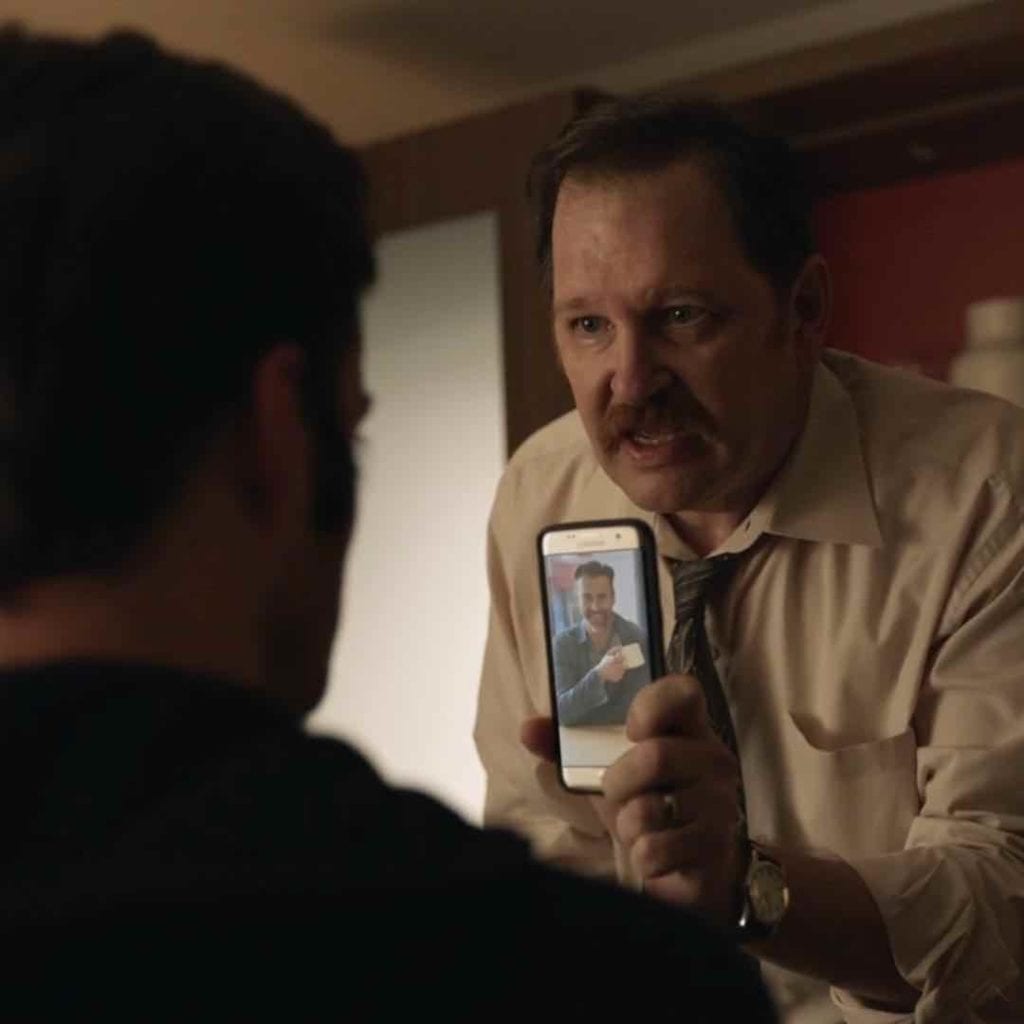 We know this mother****** won’t die. As Loach moves towards Barry, Ronny lurches to his feet, pulling out his patented roundhouse kick on Loach, dropping him instantly.

Shots are heard pinging through the store’s front windows and Ronny drops with bullets in his vitals, as Barry manages to slip away and make it to Fuches’s waiting car – but hesitates before getting in.

Should Barry continue to dance with the devil? Should he take a ride from this man who has caused him all these problems – or should he go out into the world alone and begin again, running from the circling choppers? For now, we’re hoping Barry gets in the car!

Hader has time and time again shown us his love and respect for the craft of storytelling in Barry. Already an excellent writer and subtle performer, with this taut, action-packed episode we’re calling Bill Hader the newest auteur to watch out for. Long may he be funded to make such perfect television.