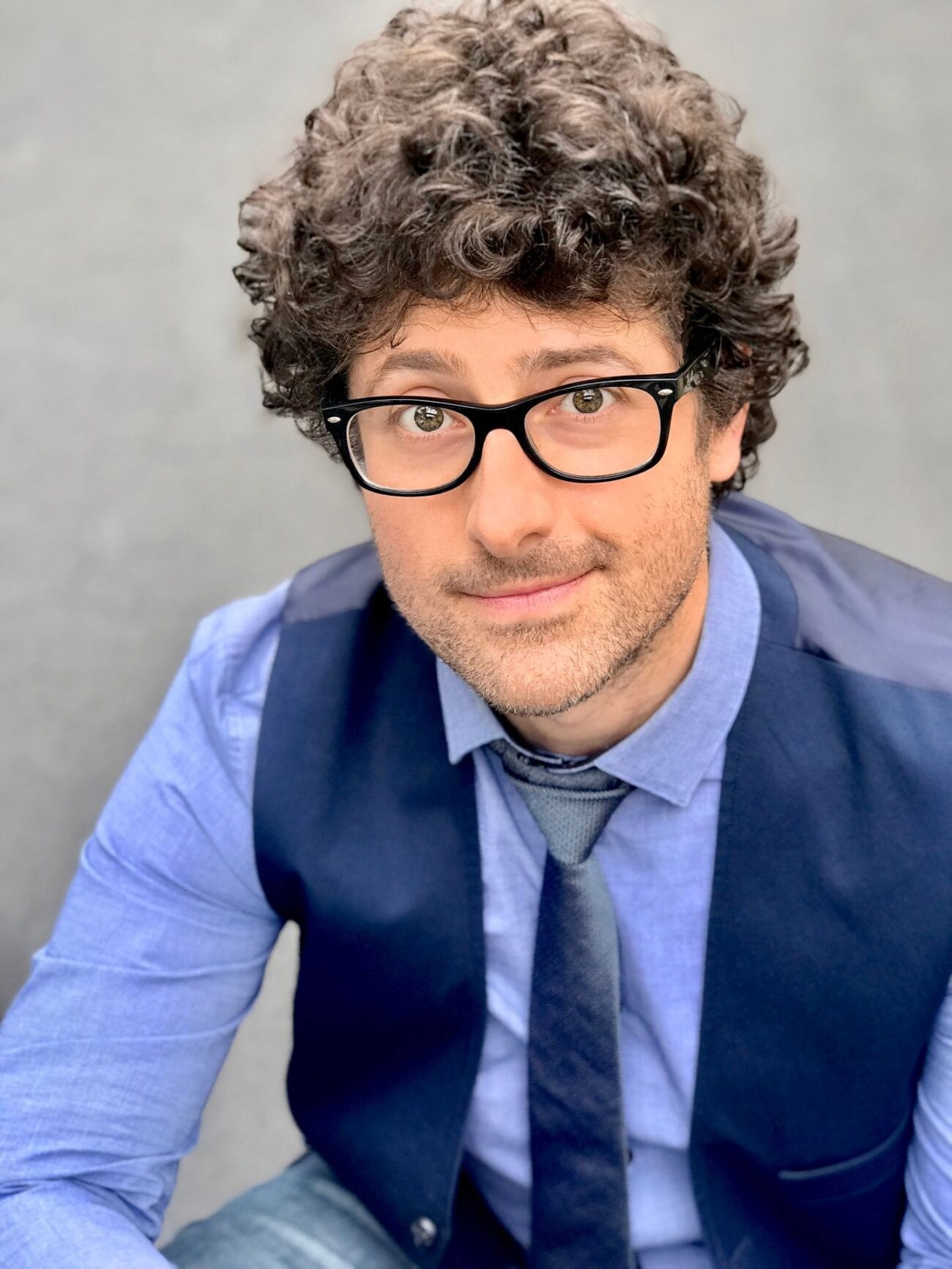 Although times are a little bleak these days, one thing remains unchanged – audiences are still looking for a delightful romance with a heartfelt laugh. The latest comedy film Love, Weddings & Other Disasters, delivers on both.

Directed by Dennis Dugan, the film interconnects the lives of people who create the perfect wedding day for a loving couple, while their own relationships are outlandish and far from perfect. Joining our bachelor on this quest for love are an inexperienced wedding planner, a fussy celebrity caterer, his blind date and a tour bus guide looking for his Cinderella.

Before this, Andy caught attention and about 60 million views on YouTube, performing original lyrics to classic movie theme songs as Goldentusk. Andy went on to work with Dugan on his comedy Jack and Jill, and also appeared in several television shows including Broad City, Austin & Ally and iCarly.

More recently, he created and starred in the Streamy and ISA-nominated zombie romantic comedy Bad Timing. Over the years, Andy has creatively partnered or collaborated with Google, VR Scout, and VR Playhouse; as well as Disney XD, Legendary Entertainment, STX Films, and Stan Lee’s POW! Entertainment through YouTube Space LA.

With Love, Weddings & Other Disasters now streaming, we caught up with Andy Goldenberg for an interview: 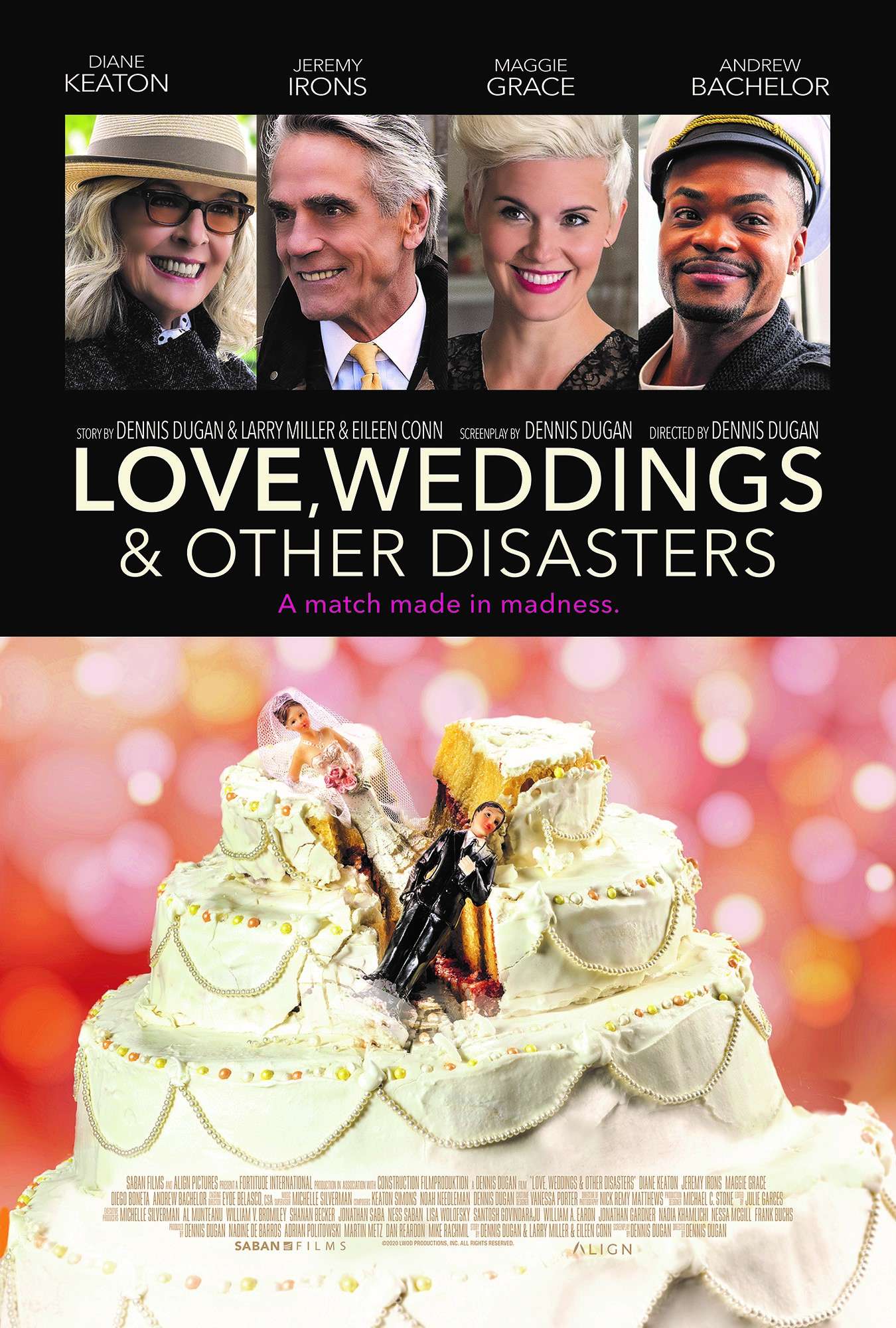 For anyone who hasn’t seen it yet, tell us about Love, Weddings & Other Disasters.

It’s an ensemble romantic comedy about love and relationships told through the lives of a group of people all involved in one high profile wedding. Directed by Dennis Dugan and starring Diane Keaton, Jeremy Irons, Maggie Grace, and many more names you’d recognize. There’s a pandemic going on. Don’t you want something light?

How did you prepare to portray Jimmy Barton?

He’s fairly close to me, save for a few details. He lives in the shadow of his older brother, and while I don’t feel that way about my own siblings, I have experienced that shame and jealousy from time to time when someone finds a success that I just can’t seem to catch. He’s got a gambling problem.

I’ve never lost enough to be a major issue, but I’ve definitely stayed a little too long at a poker game or a casino and seen how easy it is to have the surefire winning hand, but not be aware of something better hidden on the table. He means well, but life just throws the guy too many curveballs and he’s not a very good batter.

Do you consider Jimmy the Love, the Wedding or the Other Disaster? And, what about in real life?

He’s definitely a disaster. His life is a mess, he doesn’t believe in himself, and he’s a good guy but he’s very prone to accidents. My life has been majorly impacted by those who I have loved and the effect of their love on me, but as a neurotic Jewish guy, we always love to talk about the disasters. And, so, I was thrilled to play Jimmy, because he was the most fun to read. The poor guy just can’t catch a break. 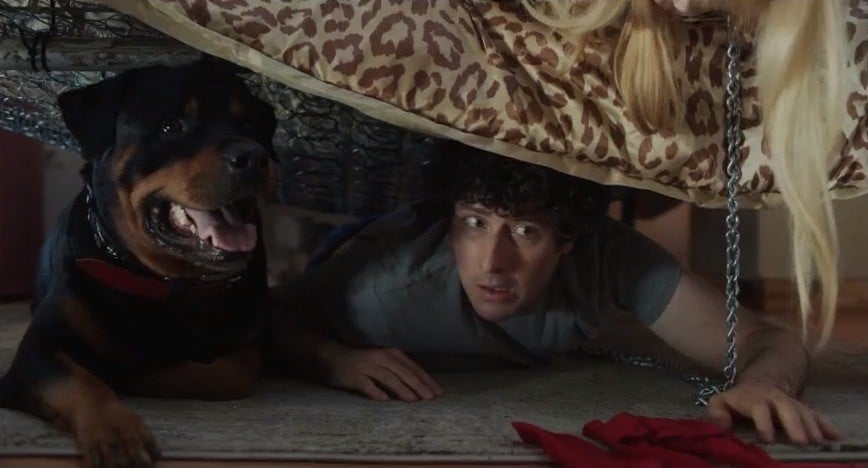 Was the script as funny on paper as it looks on screen?

I love Love, Actually, so this was an easy read for me. And the idea of a game show where the couples are literally attached to each other was very funny to me. There are great premises scattered throughout this story and I was always excited to see where the characters were going to end up.

How was working with Dennis Dugan again? And how different was it from the first time you worked together?

This is the third time I’ve shot with Dennis, although we’ve kept in touch and worked together a few times over the years. He first cast me as Adam Sandler’s performance double in Jack and Jill; seven auditions, five screen tests. Ultimately, I’d get up every morning, shave my entire body, don a pair of prosthetic breasts, and strap myself into a bra, high heels and a dress to film as Jill, and then at lunch, Sandler and I would switch roles.

This time, it was slightly easier, only having to be chained to my co-star Melinda Hill for twelve hours a day. Dennis is just one of those guys you want to be around. He’s funny as hell, he’s been in the industry forever, and he’s this really warm-hearted and friendly guy.

I’ve worked with stars and they treat certain people better than others on set, and Dennis is the kind of guy that will joke around with everybody and infect you with his enthusiasm. I’ve heard a lot of cast and crew call him ‘the Great Dennis Dugan’ and there’s a reason. 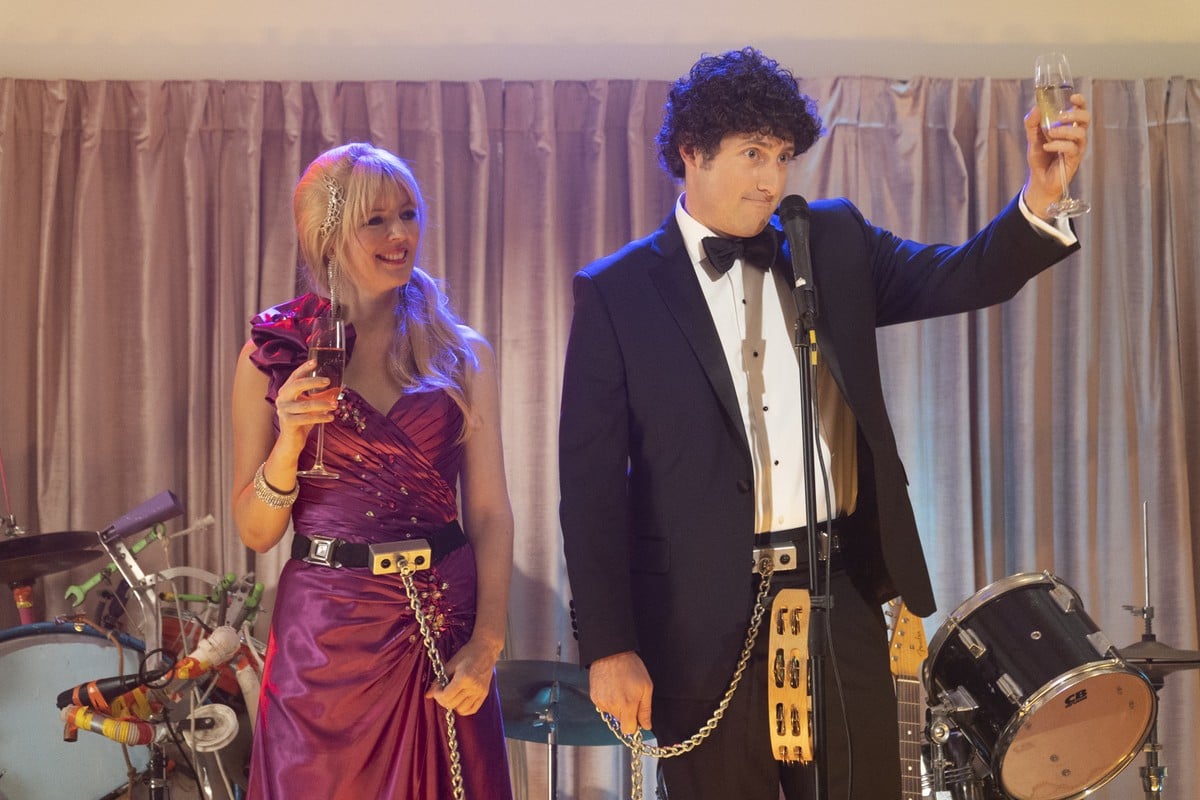 Was this experience everything you thought it would be?

Andy: I couldn’t have asked for much more. I was flown first class to Boston with a seat that turned into a bed. I was put up in a beautiful hotel for a month-long shoot in the heart of the city right by the water.

He assembled a cast of comedians who were so much fun to hang out with even on our off days, whether it was solving an escape room, catching Joker on opening night at the Coolidge Corner, or heading to Salem for the Witch Museum.

It was an extremely fast shoot, but I’m one of the leads of a film that wound up playing in theatres even during the pandemic. There are so many people right now who are finding out that their blockbusters won’t even be getting a theatrical release, so I’m blessed.

Comedy is so subjective. So are you ever worried that what you’re doing on-set won’t translate to the screen?

I don’t just play a neurotic guy on-screen. I’m always worried that what I’m doing on-set won’t translate. And, let’s face it, I don’t deliver just one-hour long performance that you get to watch. The editors and a team of people scrub through my hundreds of takes and craft my hour-long performance out of many days of work.

Sometimes, you get lucky, and it all works, and sometimes it doesn’t. But I’m pretty happy with what we got. Hearing Dennis laugh was always a good indication and, of course, hearing people at the drive-in theatre laugh was really nice. 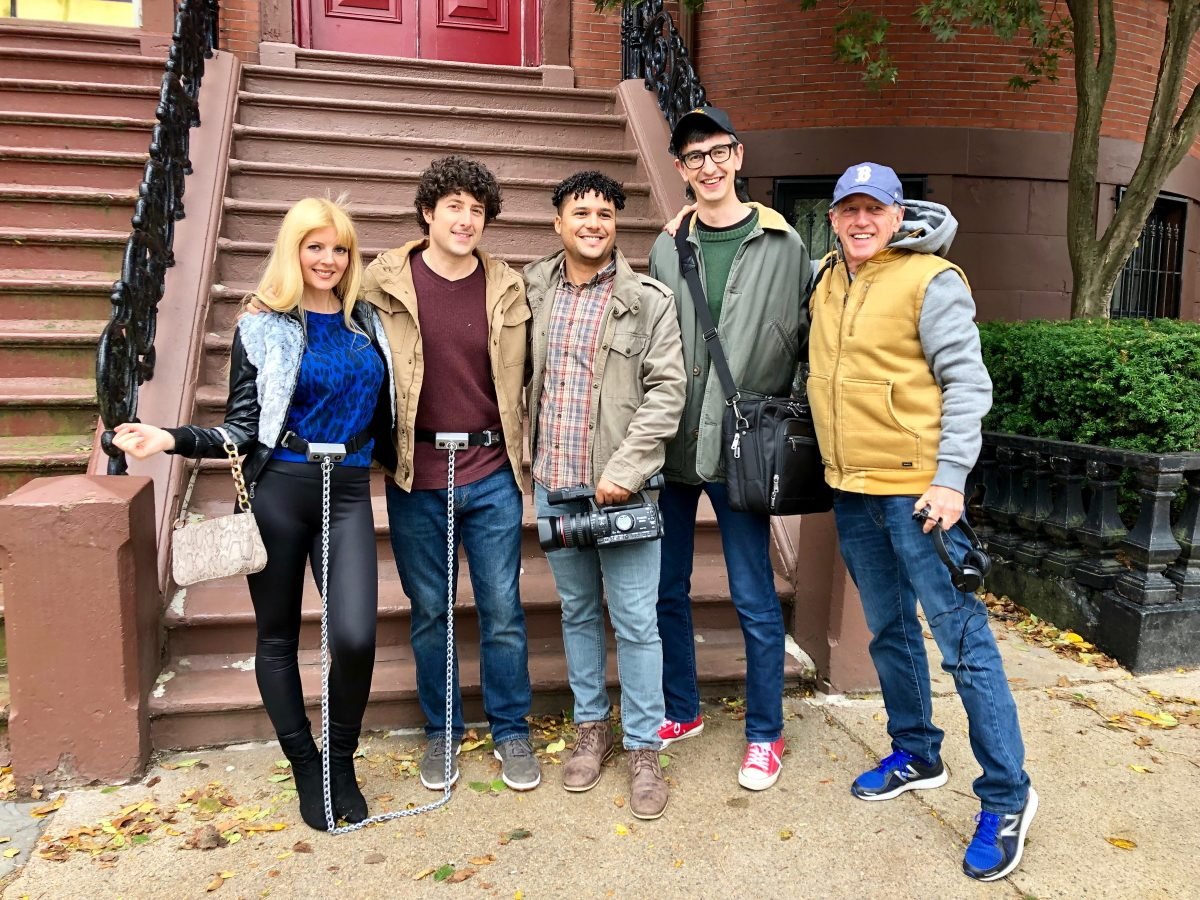 How did you get into acting?

I played a lot of sports growing up, but I was really only ever good at one position: sitting down. I could make everybody laugh, though. And, while all the boys were outside getting ready for their games, I was with all the girls rehearsing for the plays. It seemed to me in the moment like I had found some kind of unknown loophole in the system. Plus, I was told I was good.

So, I studied at the Starmakers Family Theatre and became Drama Club President in high school and graduated with a BFA from the University of Miami Theatre Department before heading out to LA to be a star on YouTube.

Andy: You always hear that the most challenging aspect of being an actor is the constant rejection, but I learned to deal with that fairly early on in my career. People may not like me, but I like myself. For me, it’s the ghosting. You audition for numerous projects where you only know for certain that you didn’t book it because it’s already filmed.

There have been times where I’m waiting to know if I can cut my hair or shave or go on vacation and I get radio silence. The most inspiring aspects of being an actor have really come from improvising. Truthfully, as an improviser, it really informs my whole life, but specifically working in a theme park as an improv performer and playing with kids there is magical.

I remember my first trip to Universal Studios when I was a kid and how blown away I was by the spectacle, and to be able to really deliver that for some of those kids has been truly rewarding. It’s like being in the close-up room at the Magic Castle; you can see them smile and change their life. 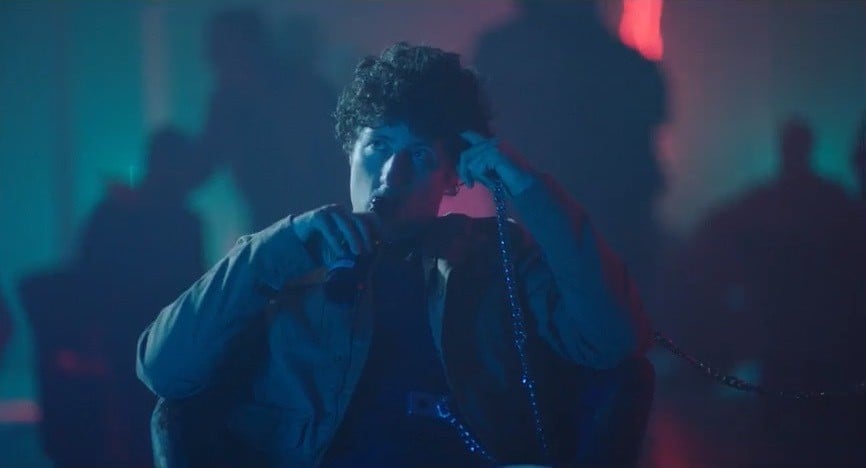 My younger brother is full of advice for me. One saying of his that I seem to come back to a lot in my life is, “Act like you’ve been there.” It’s true. It embodies confidence and relaxation. You don’t have to prove anything to anyone. You’ve been there. Don’t worry. Everything’s going to be fine. Also, “Don’t go in there.” Listen to whoever tells you that.

We can’t let you go without asking…what makes you laugh?

I love to laugh. In the literal Ides of March, a global pandemic shut down everything and I thought society was about to crumble. My wife was six months pregnant. Now, my son is almost six months old and he cracks me up. He just thinks everything is funny. A fart, a contorted facial reaction, a blank wall. It doesn’t matter. It’s hilarious. How is that wall funny? As an adult, it’s fascinating and very entertaining. You feel like a kid again.

That’s the “dad” answer, I guess. I will watch any slapstick parody movie, though, especially from the 1970s-1990s and anything from The State, Monty Python, The Kids in the Hall, or Key & Peele. Also, I’d be remiss if I didn’t mention that I absolutely adore my wife’s impression of Darrell Hammond’s impression of Sean Connery on Jeopardy. I think about it and I start laughing. 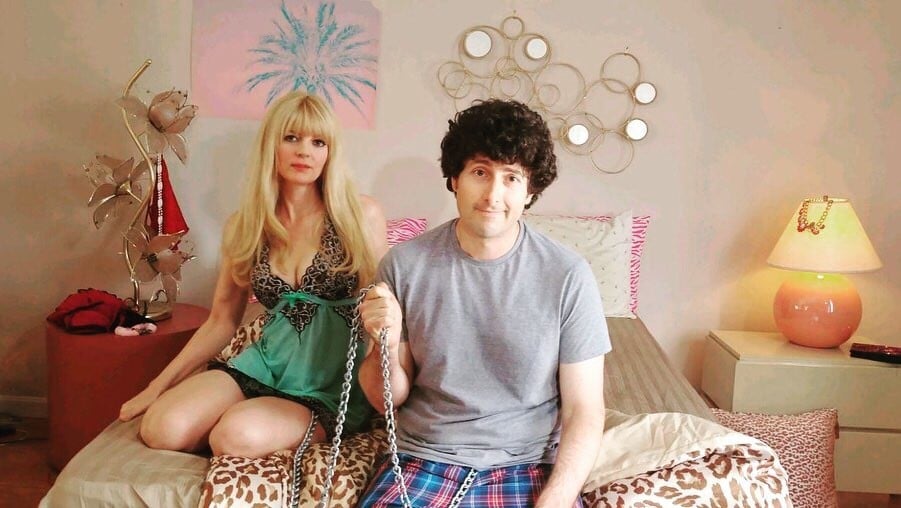 Anything else we should know about you?

I wrestled an alligator in Colorado. I don’t look like I would be that brave. I’m not. Granted, “wrestling” was simply sliding onto this eight-foot beast’s back and grabbing his jowls and lifting his head up into an upward facing dog yoga pose.

However, it was a real large animal and the alligator farm guide was far enough away that if that alligator had wanted to, he could have bucked, swiveled, and dragged me into the water for good. And that is why I will never, ever try that again. Even for a laugh.