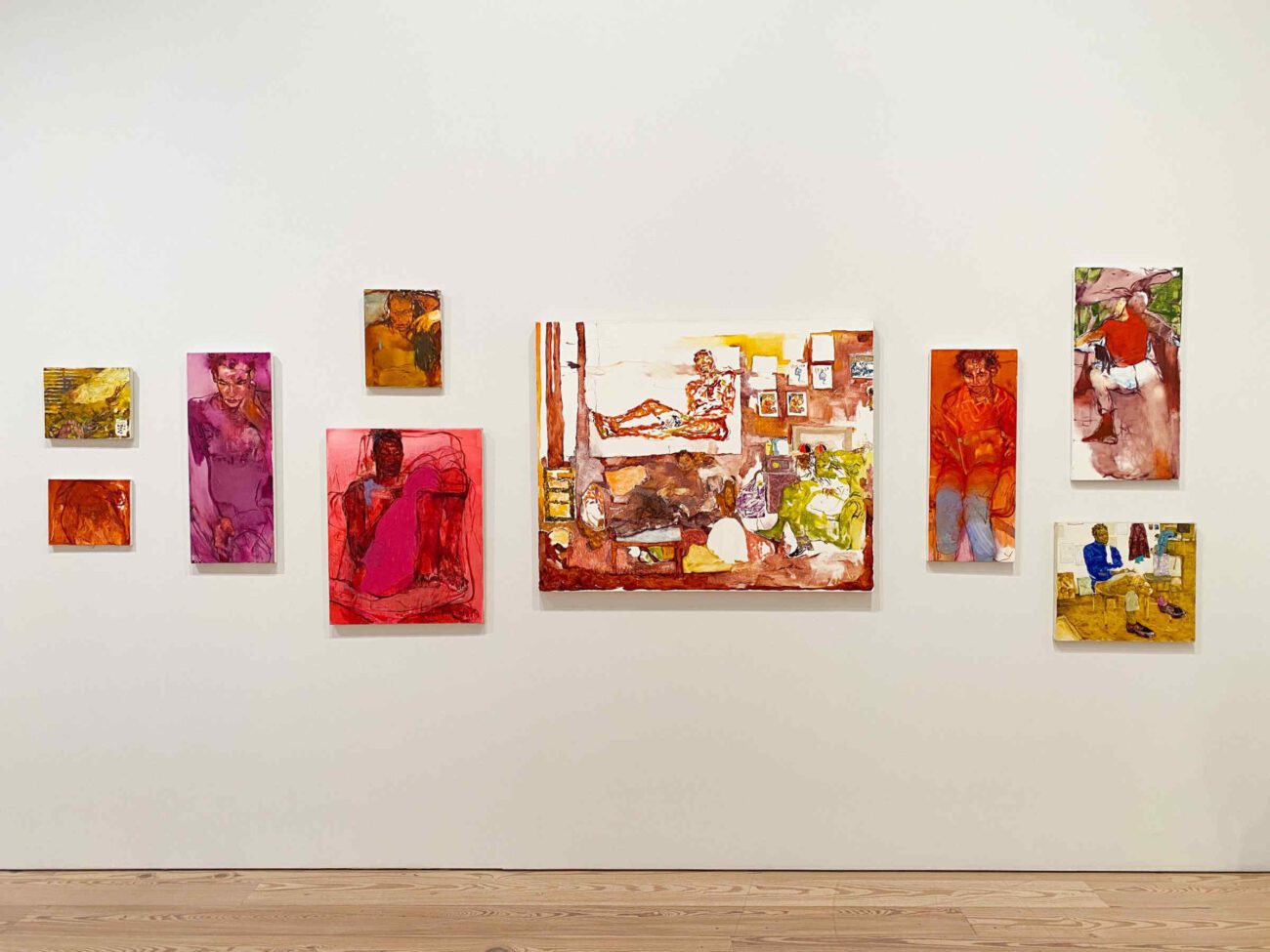 Colors are undeniably an enjoyable part of human existence. They are powerful enough to affect our moods and inspire emotions. From the reflected beauty of nature around us to the artificial colors used to adorn objects of daily living, color is everywhere we look. Colors add flavor to what would have otherwise been a bland existence.

A vibrant burst of color is a refreshing sight to behold. Such a spectacle can mesmerize its viewer with its display of beauty. But, think about it, what do exotic birds and rainbows have in common aside from being wildly loved? That’s right, their array of colors! And it’s the very reason why many people find them appealing.

Knowing the human psyche is attracted to beautifully illustrated colors, artists have used color to lure their audiences for centuries. A colorful work of art easily stands out, boldly calling attention to itself. It also maintains awareness by compelling viewers to distinguish each color. This article explores the colorful side of art by highlighting famous colorful paintings. 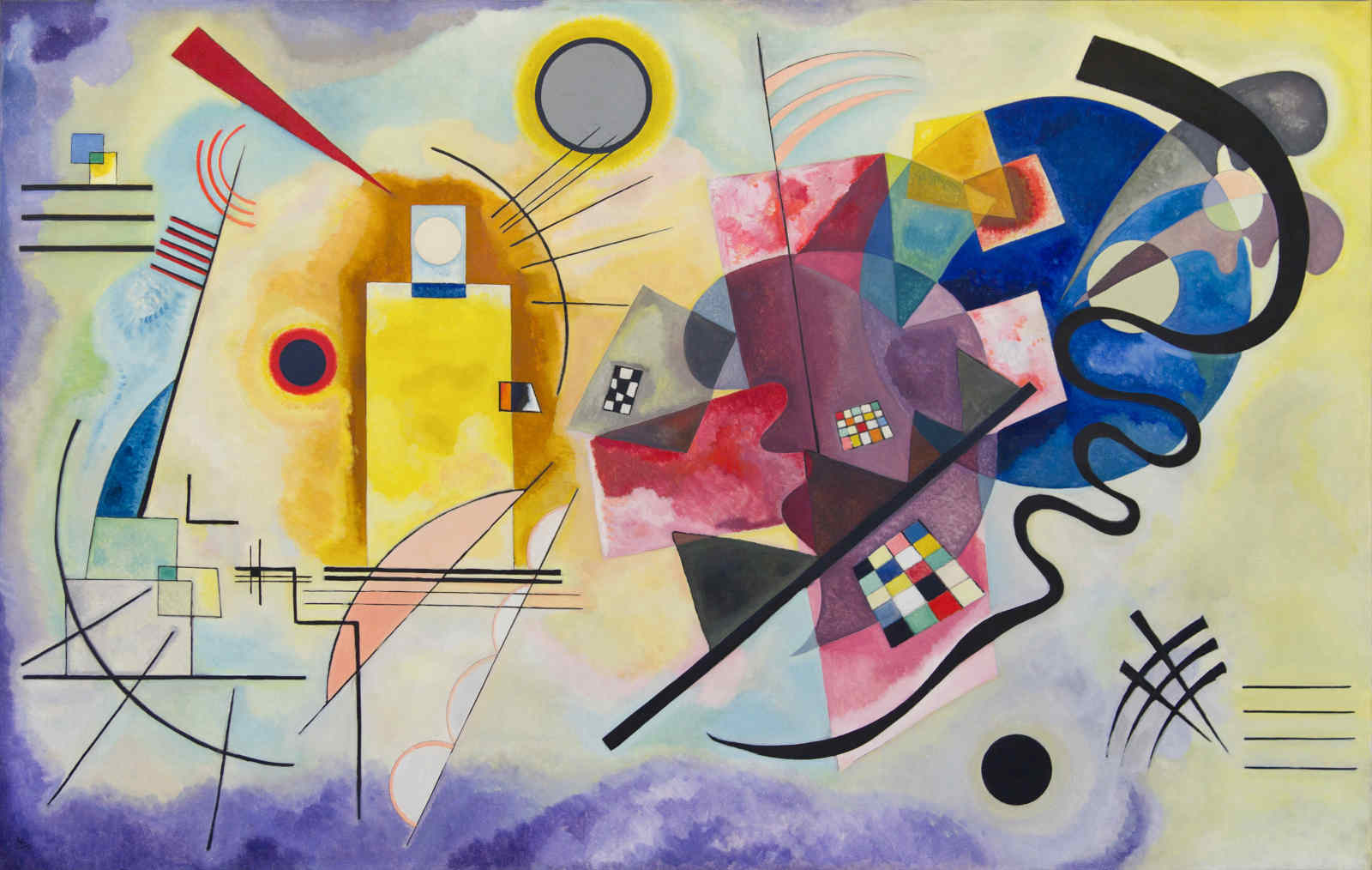 Kandinsky was a Russian artist remembered as one of the pioneers of abstract art. He masterfully exploited colors evocatively, keeping most viewers curious and transfixed.

This 1925 painting is perhaps Kandinsky’s most notable work. It is a composition of geometric shapes and vivid colors depicting the three primary colors. The viewer is then led to a discovery of other colors contained in the painting as the eyes make their way through curves and straight lines. The geometry is strategically placed to guide the viewer’s eyes, ensuring they catch every element until all aspects of the colorful painting are explored.

Most critics of the abstract genre believe the art to be composed of random elements. However, Kandinsky was intentional about his arrangements. He managed to create balance in all of his most renowned famous colorful paintings. It is currently housed in the Musée National d’Art Moderne, Paris. 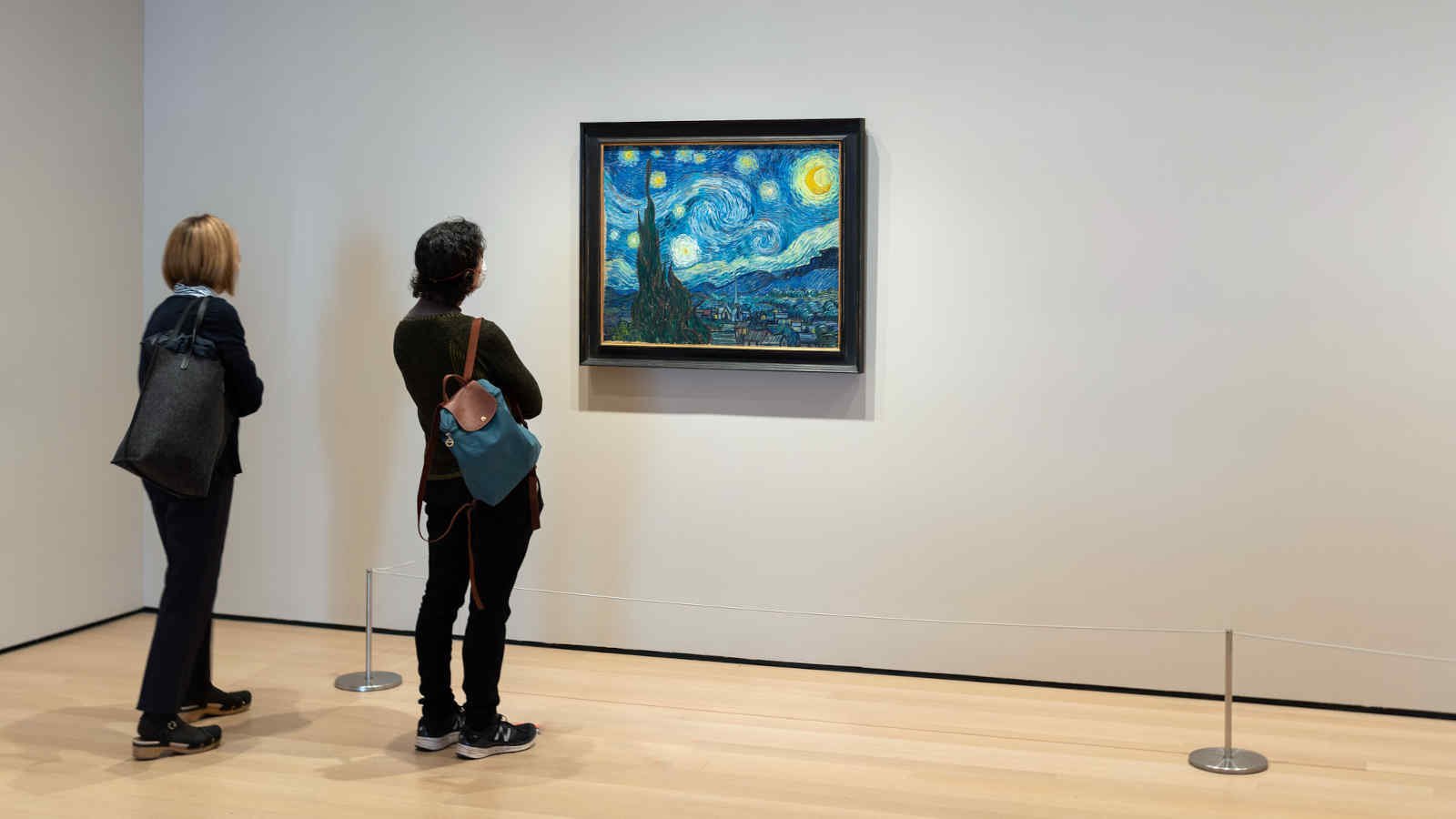 Van Gogh was an incredible Dutch Post-Impressionist painter who spent most of his artistic career in France, producing about 2100 paintings within his short career span. However, the artist’s posthumous fame established him as one of the most famous painters in western art history.

Following an 1889 episode that resulted in self-harm, Van Gogh was admitted into the Saint-Paul-de-Mausole lunatic asylum. He created this oil-on-canvas painting that same year, depicting the view of Van Gogh’s asylum room window. When Van Gogh was staying at the asylum, he also created some other masterpieces currently in prestigious museums across the globe. For example, Starry Night is on display today at the Museum of Modern Art in New York City.

The painting is a colorful composition of black, blues, and yellows, showcasing the beauty of the Saint-Rémy-de-Provence before dawn. The moon and the stars give off a golden radiance against the rich blue background of the sky. He also swapped the wheat field for an imaginary village to make the painting appear fuller. 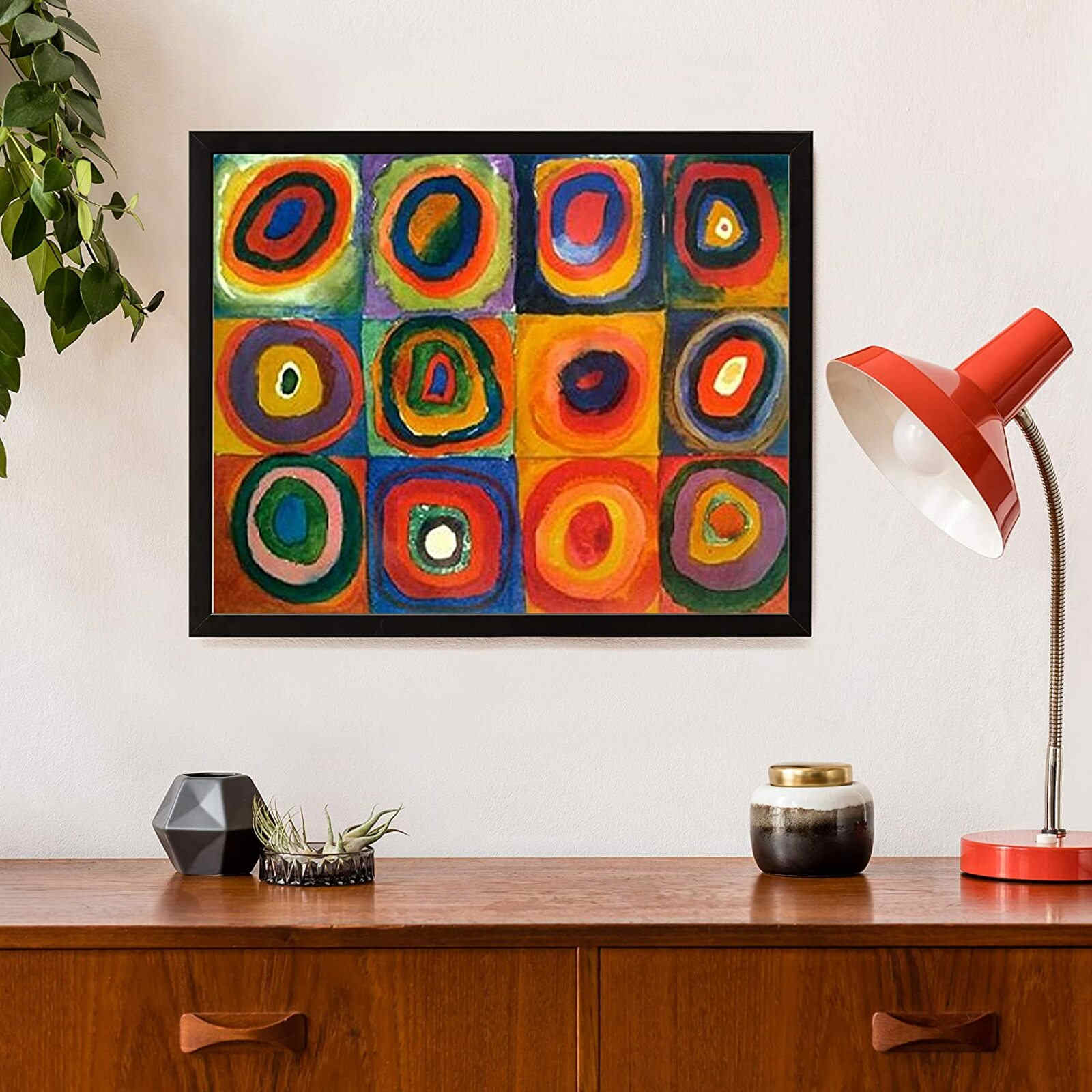 Kandinsky makes a second appearance on our list with this 1913 color painting. However, perhaps his most recognizable work, the painting, is a study of different color combinations used to aid his creation process.

The study is a colorful arrangement of different colored circles within colorful squares or boxes. Again, we see Kandinsky’s fascination with colors and shapes on full display here.

Described a synesthete who could hear colors; color wasn’t just an element of art to Kandinsky; to him, it was its very soul. Hardly is there any other painter that placed so much emphasis on color as Kandinsky did. So much so that he devoted himself to studying various color combinations and how the human eye perceived them. 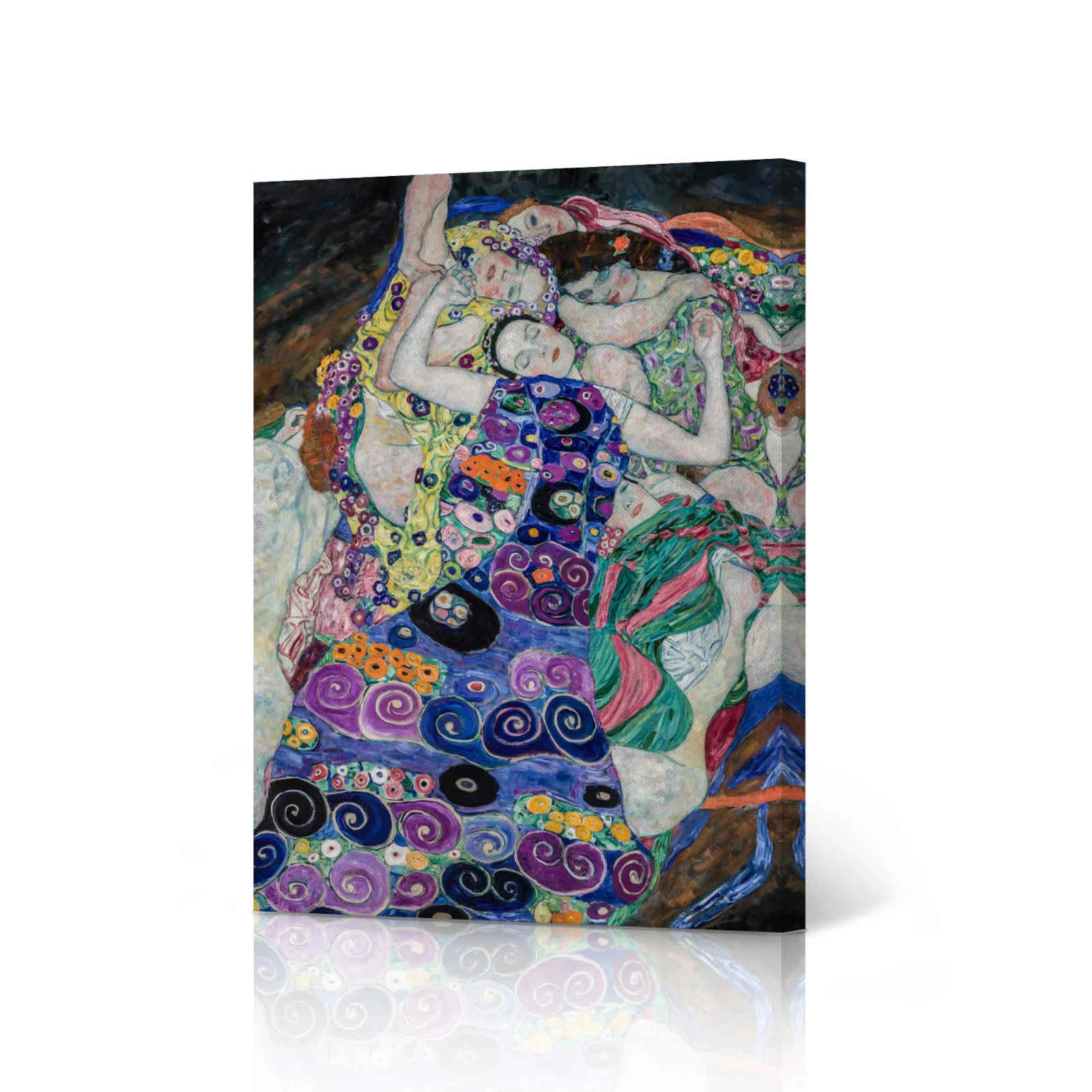 The Maiden by Gustav Klimt

Gustave Klimt was a famous Austrian painter of the Symbolism movement. He is remembered for his figurative works and the staunch eroticism in his art. Another notable feature that characterizes his artistry is his repeated use of this female body as a chief subject.

The colorful oil painting was created in 1913. It is an illustration of a young girl’s dream about different versions of herself in the future. The dreamer is the centralized character, while her companions reflect her ideas about her future self. The seven ladies are entwined in a cyclical shape, each representing a different stage of womanhood.

The painting also highlights some topics of human existence like love and sexuality, and the volume of flowers is said to symbolize the blossoming into womanhood. It is presently at the National Gallery in Prague, Czech. 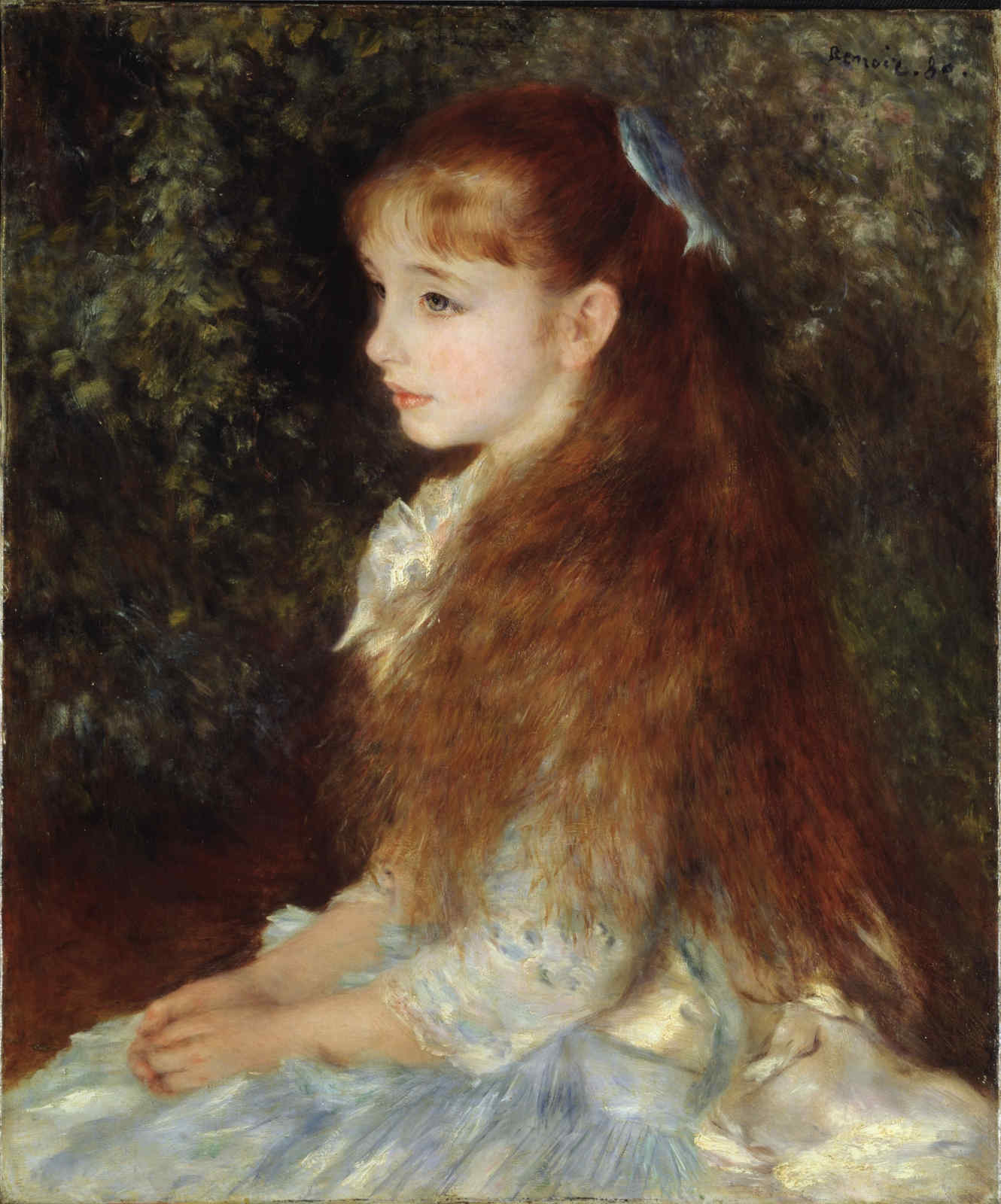 French artist Renoir had a formative influence on the development of the Impressionism movement. Borrowing from Eugène Delacroix and Camille Corot, his works are distinguishable for their colorism and luminosity. Also, He preferred to paint his subjects in intimate and candid compositions, mainly focusing on the female form.

Also called Little Irene, the oil-on-canvas portrait of 8-year-old Irène Cahen d’Anvers was created in 1880. It was commissioned by her father and affluent French-Jewish banker Louis Cahen d’Anvers. It depicts Irene seated gracefully and turning away from the viewer. Her gorgeous hair, which falls down her back and cascades over her left shoulder, is painted in a rich auburn color, stealing the show.

Renoir also painted portraits of Irene’s little sisters, Alice and Elizabeth. The portraits, now housed in the São Paulo Museum of Art in Brazil, are popularly known as Pink and Blue. 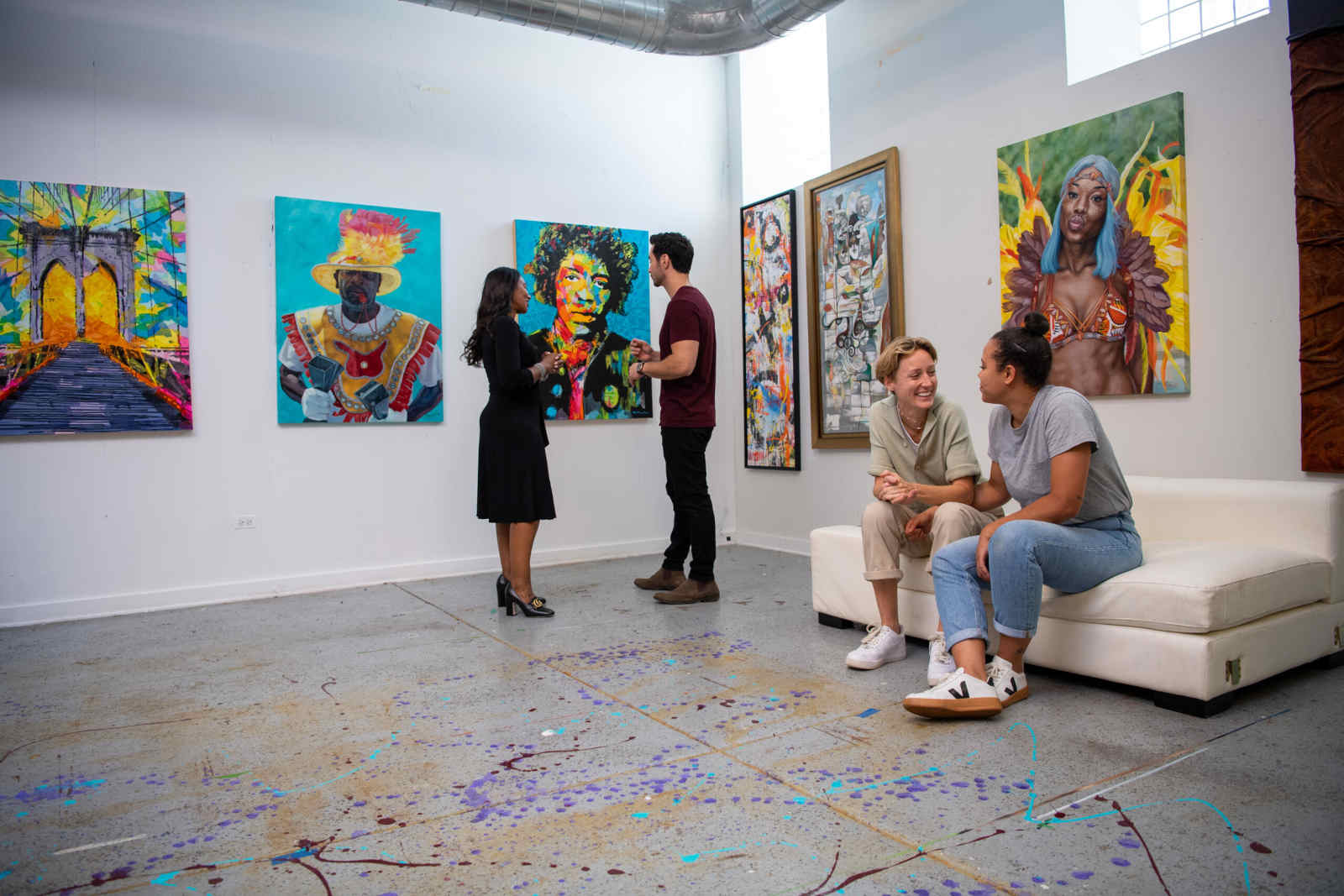 Color combination is perhaps the most eye-catching part of any painting. Throughout art history, artists have studied color theory and optics to understand how colors are perceived by their viewers. Many mastered this and used it to their advantage by creating breathtaking images that radiate with elegant hues. These splashy masterpieces have retained their appeal, attracting wave after wave of admirers. 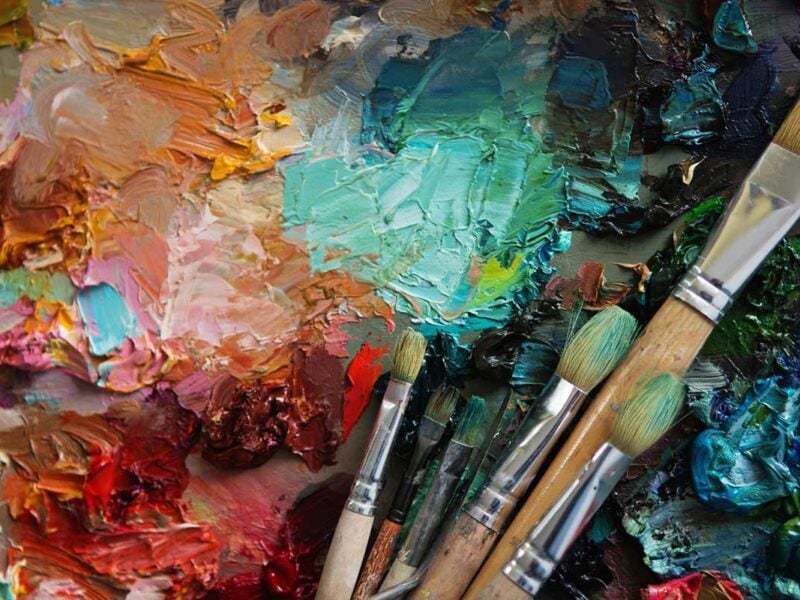