‘Surprise in the Night’: Directed by filmmaker Sam Bhat and Aaron Rothermund

Sam Bhat’s new film Surprise in the Night is the first movie where he has worked as writer, producer, and director – he co-directed the film with Aaron Rothermund. Bhat describes himself as “an Indian born Canadian, an engineer by education, and an artist by inclination”.

Surprise in the Night follows the character Jacqueline Simpson. Jacqueline is a high-powered business executive and the story shows her confronting the male gaze, questioning female stereotypes, and patiently lead a crew of hung-over employees successfully – all without breaking a sweat.

Bhat has a Masters degree in engineering (with merit) from the Indian Institute of TEchnology Delhi with a specialized background in interdisciplinary engineering and geosynthetics management.

However Sam Bhat also has a love for the performing arts and utilizes his technical engineering skills to create a unique synergy, enabling him to create stories investigating life & its secrets in depth and from new perspectives. 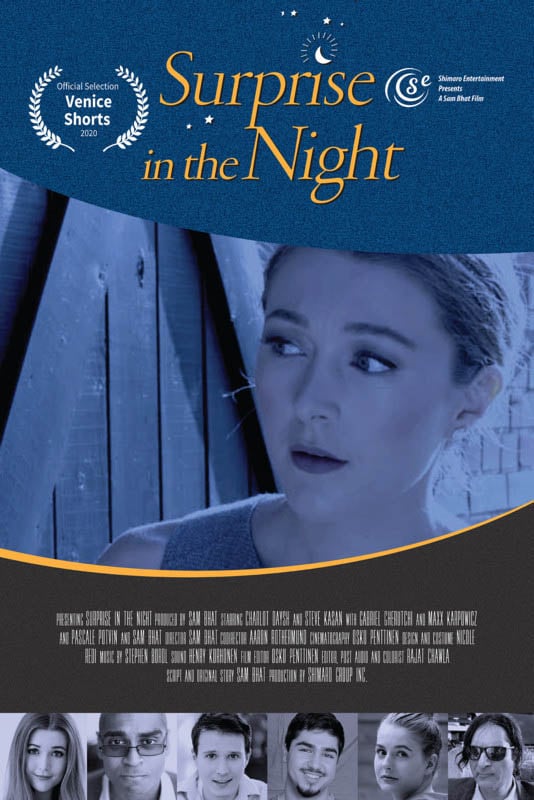 Bhat has been involved in the performing arts since he was seventeen and has produced and directed numerous Bollywood events in Toronto over the past few years including Sams’ September Fusion (2015), and Sam’s Salute to 106 Years of Bollywood (2019). Each event also had charity in mind, raising money for the Canadian Cancer Society and 360 Kids respectively.

Aaron Rothermund is also a writer, director, and producer and co-directed Surprise in the Night. Rothermund is currently working on a project called Respect. The script was chosen in 2019 out of a list of thirty screenplays by the Script to Screen Program at Centennial College. The script was then workshopped and is being produced as a class project. The festival-quality film is expecting a 2021 release date.

“I’ve always been excited by perception versus reality in the human condition. I’ve learned that people trust their first impression, and are rigid in their assumptions.

“I’m keen to develop stories based on the differences in perspective from one person to another, and expose stereotypes and misinformation.

“With Surprise in the Night I wanted to address the double-standard within management, gender inequality, and stress the importance of environmental preservation.

“I enjoyed working with co-director Aaron Rothermund. We experienced a number of bumps due to technical issues, but we met the challenges head-on, and made a beautiful film.

“Thank you to the cast and crew!”