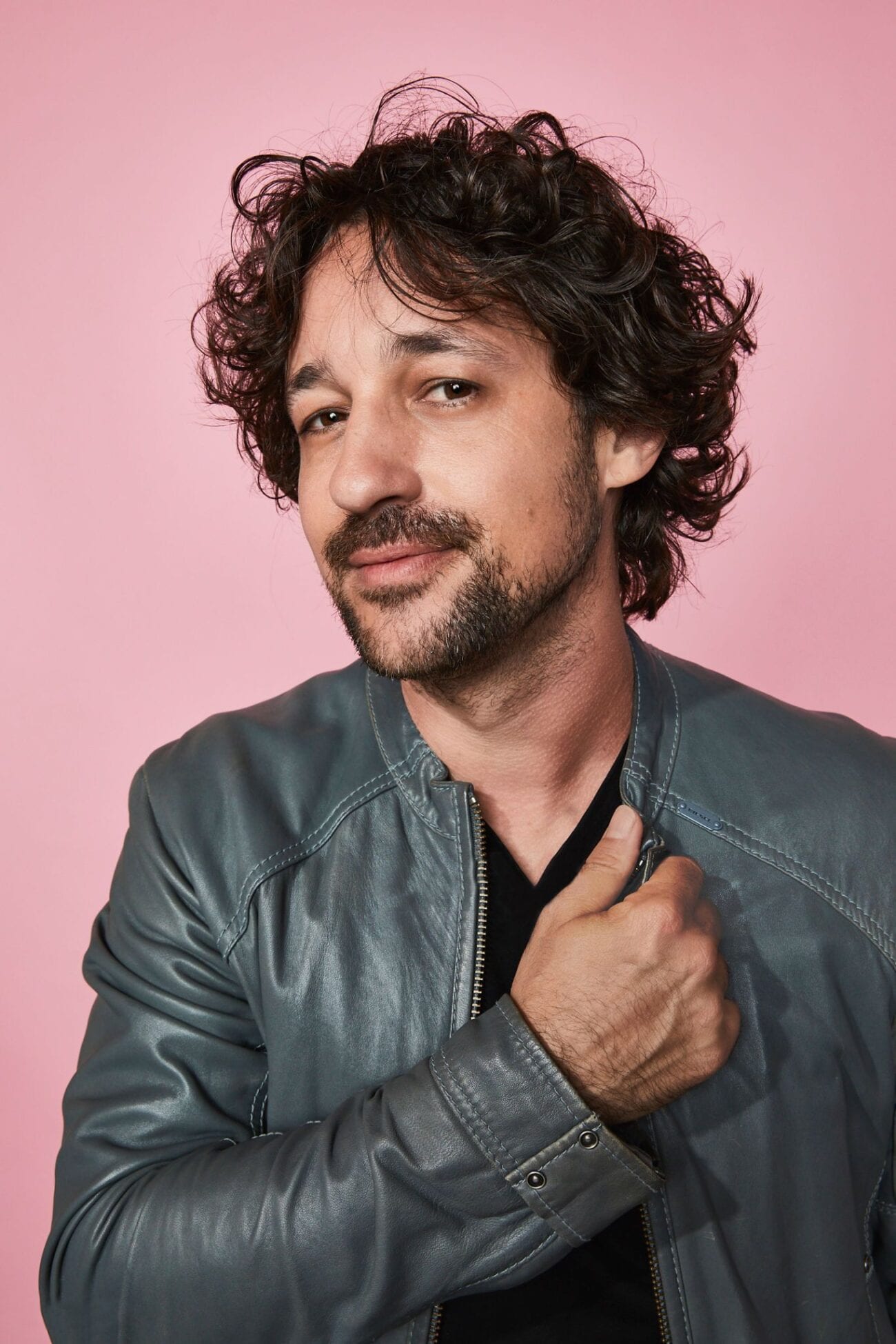 Thomas Nicholas has been dazzling audiences for two decades. He began his acting career on the classic sitcom Who’s the Boss? before starring in beloved kids films like Rookie of Year (1993) and A Kid In King Arthur’s Court (1995). His profile continued to rise as he got older, as he appeared in Party of Five and the hugely popular American Pie franchise. Some of Nicholas’s other notable film roles include Eugene in Please Give (2010) and Walt Disney in Walt Before Mickey (2015).

Nicholas’s talents are limited to acting, however. In addition to playing in the pop-rock group TIN Band, he is a member of the Producers Guild of America. His latest film, Adverse, sees him pull double duty as both actor and producer. The film boasts a stellar cast made up of Mickey Rourke, Sean Astin, Lou Diamond Phillips, and Nicholas’s son, Nolan Rivers Nicholas. Click here for a list of where to see Adverse in a theater regionally.

Film Daily had the pleasure of talking with Thomas Nicholas about his successful career, his transition to producing, and his experience working alongside his son. Here’s what he had to say: 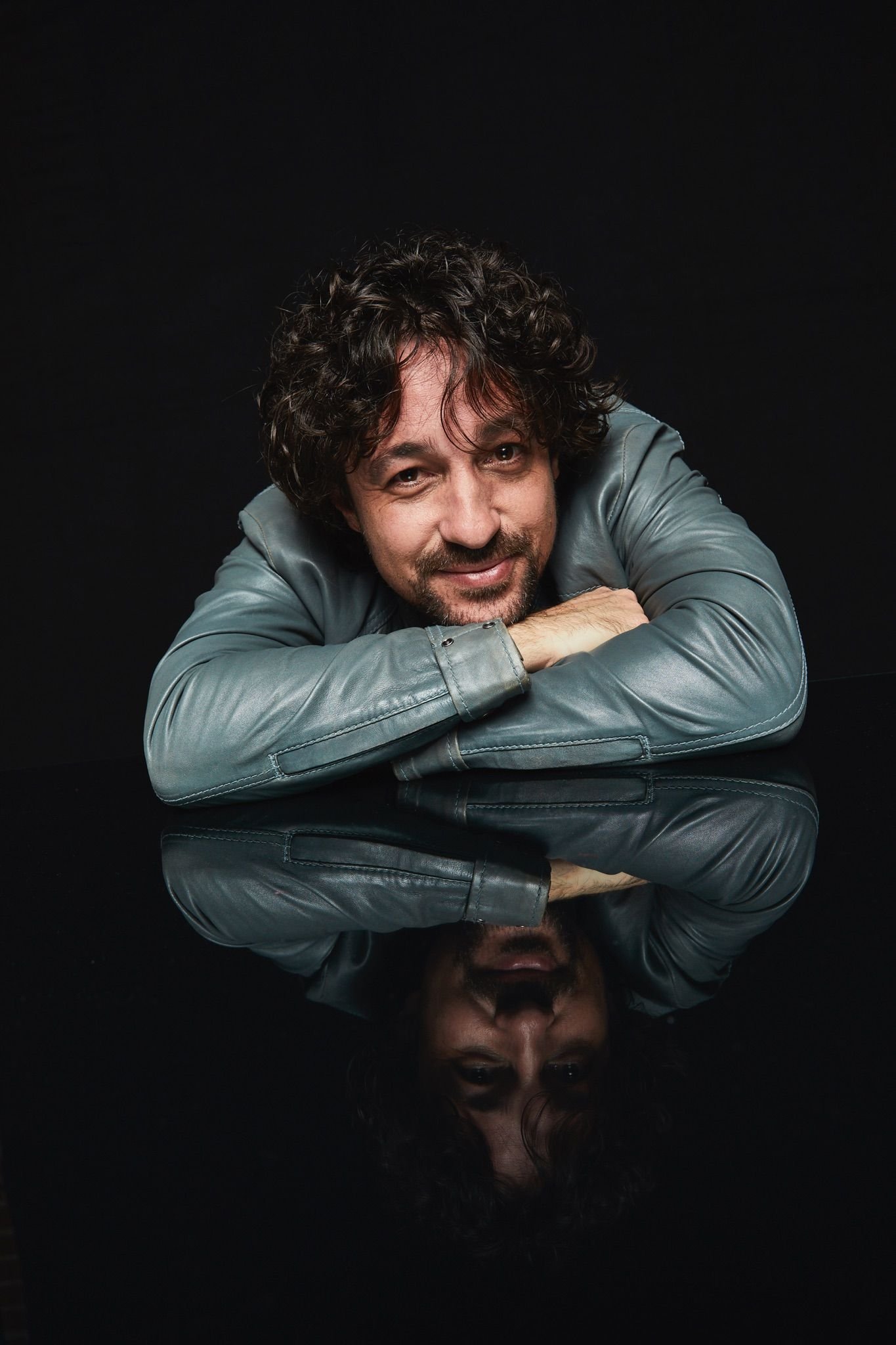 Tell us about your early life. What made you decide to pursue acting?

I’ve always loved being on set. My first experience working on a film set was when I was 6 years old. I played a background performer in an indie movie and I was hooked.

You started your career on sitcoms Who’s the Boss? and Married… with Children. Were you intimidated by bei­ng a newcomer to these hit shows? Did you learn any tips from these experiences that you still use today?

I went through some early setbacks getting started that shaped my perspective. After 6 months of commercial auditions, 2 to 5 per week, my first agent dropped me for getting a few adult teeth that caused me to lose a few baby teeth. My second agent recommended that all her clients attend acting classes. I continued going on weekly auditions and learning to develop my skills in class.

By the time I got to set, I was just so happy to be there. Happy to get the job. I still have fond memories from both of those shows. I don’t remember feeling intimidated, I just focused on the work, which is what I still do to this day.

You mentioned you screen tested opposite Elijah Wood’s role in The Good Son (1993), but went on to do the baseball comedy Rookie of the Year instead. Does your approach to acting change depending on the genre?

Yes. After the screen test, I had a pin in me to play the role, I’m sure others did too. McCauley wasn’t at the mix and match session, but he ultimately got the gig. In any case, the prep work is similar when creating a character and rehearsing for the role. The details are just different. Drama tends to come more naturally for me, and comedy requires a more concerted effort.

You continued to score huge successes into the 2000s as part of the American Pie cast. How important is chemistry between actors when you’re doing a comedy?

The chemistry between any cast member is very important. Since I can’t control how I feel about a person or vice versa when we aren’t in character… I personally tend to use the details of the truth of those feelings and apply it to subtle details of the scene. Art imitating life, if you will.

The old adage is that comedy is harder to perform than drama. Do you agree? Did you find it tougher to play in something like American Pie then 10 Cent Pistol?

I personally agree with that. When I was younger my acting coach and mentor, Kevin McDermott, told me that drama was my forte and comedy was my weak point. Since you can only be as strong as your weakest link, I spent a lot of time honing my comedic skills which in turn made me a better dramatic actor. It’s only now that I’m finally able to unleash that with my newest film Adverse.

You were terrific as Walt Disney in the 2015 drama Walt Before Disney. What was the preparation like to play such an iconic figure?

I’ve had fun playing roles like Walt Disney, Martin Scorsese, Frank Sinatra Jr. and Abbie Hoffman. The preparation for playing those real-life people is that instead of creating their back story I spend lots of time researching their real-life history. Then, it’s the challenge of relating to them and being able to organically portray them. I try to do more than simply emulate them and do my best to find the truth of the performance.

You carried twice the workload as the star and producer of your new film, Adverse. What initially drew you to the project?

I’ve worked with Brian A. Metcalf on previous films. When I read his script for Adverse, I was drawn to the character of Ethan. Brian was unsure if I would be able to portray the character the way he envisioned, so we began a series of work sessions to develop my approach. After weeks we had created a look, voice, and physicality that was very different from myself.

I based the character loosely upon a few people that I was friends with way back in the day. At that point, we began to delve into weeks of rehearsals with Kelly Arjen, producer and actress playing the role of Ethan’s sister, Mia. The relationship of the brother and sister is the cornerstone for this film and the most important element to the story.

Adverse has a stacked cast made up of Lou Diamond Phillips, Penelope Ann Miller, and Mickey Rourke just to name a few. How did working with these stars influence your own performance in the film?

I was very honored to work with such an amazing cast. I have said that acting is 80% listening, so when I am surrounded by talented actors all I really have to do is pay attention. I remember a moment when I finished a take and Lou gave me a slight head nod, as if to say “good job” I was thinking… I just got the head nod of approval from Lou Diamond Phillips.

Another moment that comes to mind was the first scene I filmed with Mickey Rourke. He didn’t really say anything to me before we started filming. The camera was rolling on the first take and Mickey started to go off book. Now, I love dramatic improv, so I do my best to stay with him. After a little while our director, Brian, finally says “cut.” Mickey tilts his head back and acknowledges me with an air of approval as he says, “Hey… I’m Mickey.” I was thinking to myself that I had just passed some sort of test. 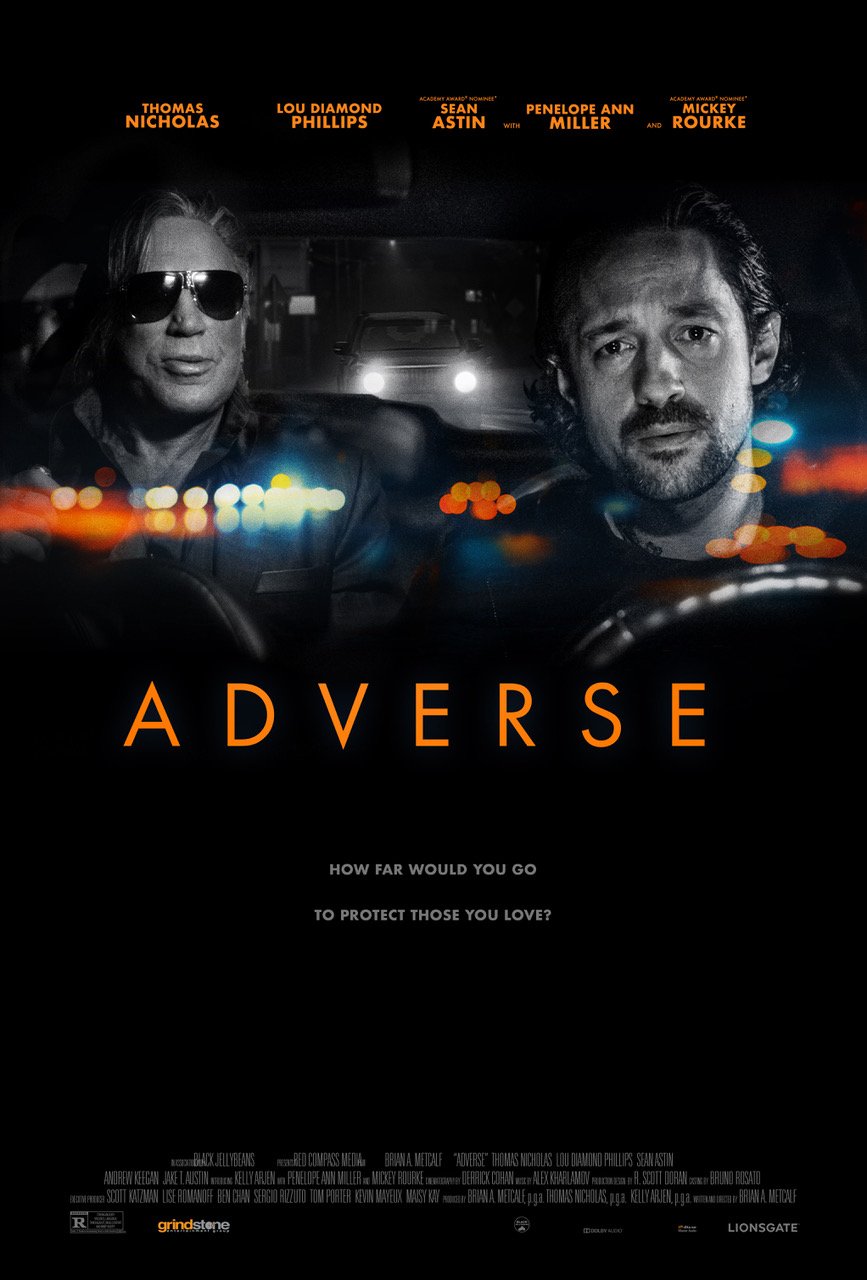 Adverse also gave you a chance to act opposite your son, Nolan River Nicholas. What was that familial experience like?

It was a pretty cool moment. I remember explaining to him that when the camera was rolling, I was going to look at him in a different way since I would be Ethan and not his dad. He did very well with it all. Regretfully, our big moment on screen together didn’t make the cut. He’s still in the film of course, and I joked after the trailer for his M. Night film Old played during the super bowl, that we should have given him a bigger part.

Do you find it easier to play a character that you have a personal connection with?

I always have to infuse a little aspect of myself in each role that I play in order to make the performance feel organic and not contrived. If the personal connection isn’t obvious then I have to create a connection when building the characters backstory.

I really just love being on set. It’s a heightened reality and still my favorite part of the entire process.

I always aim to provide an escape for anyone watching. To do my job well enough that it draws you into the world that I’m a part of creating. Entertainment is a momentary break from our own lives and thoughts. I want people watching to get caught up in the moment and feel something because of what the characters are going through.

It’s my goal to become a character lead and lose myself in the role. In the footsteps of Daniel Day Lewis and Gary Oldman.

You directed and starred in the 2004 film L.A. D.J. Do you have plans to direct more in the future?

I’ve directed a handful of music videos for my band and for my wife Colette. I do have some other projects in development that will have me in the director’s chair again. I hope that I get to bring them to light.

My first audition for Rookie of the Year, I didn’t receive a call back. That was it. Around the same time frame, my second agent dropped me as a client, which is a different story in and of itself. No gig and no agent.

What is your greatest success?

In the motto of never giving up, I pursued and landed a new agent. She got me an audition for Rookie of the Year. I informed her that I had already been on that appointment and didn’t get a call back. She said, “They obviously don’t remember you. So go again.” I did and the rest is history. 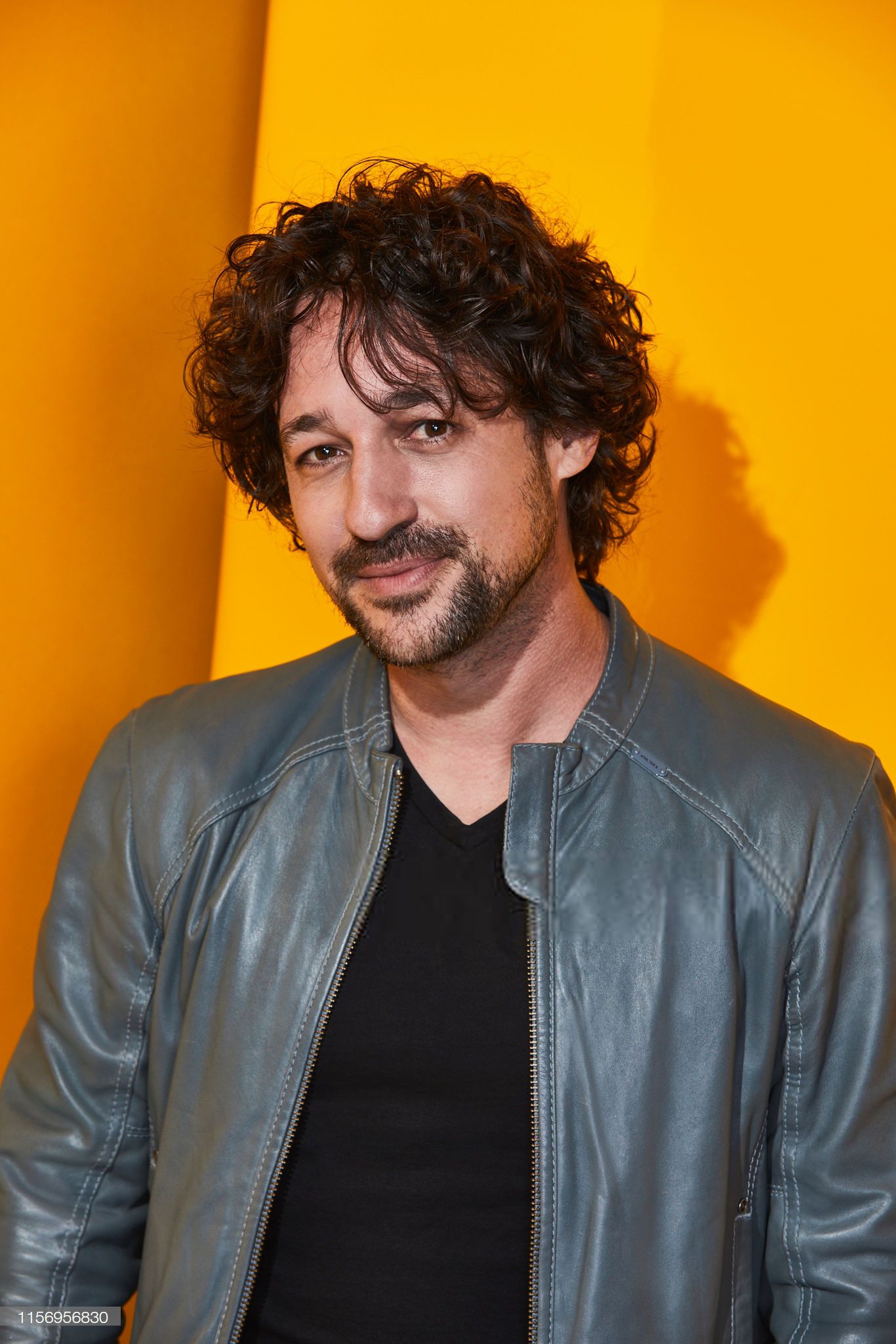 I’m developing some more feature film projects with Brian A. Metcalf. In fact, we may be entering into the TV space but that’s about all I can tell you. I’m also working with both my kids on music animation projects that will be educational without annoying parents. It’s called The Robot Kid.

I’ve been doing weekly streaming concerts on my Patreon for 43 consecutive weeks during lockdown. My band has singles coming out every 6 weeks. The next one Luminary drops on March 9th, the same day as Lionsgate is releasing Adverse to streaming platforms.

Are there any filmmakers or actors you want to work with?

I would love to work with Gary Oldman, Chris Cooper, [Robert] De Niro, [Al] Pacino… and so many more. As far as filmmakers, Christopher Nolan… ever since I watched Memento (2000) back in the day. Scorsese and not just because I portrayed him in a movie. [Steven] Spielberg, though he was a producer on Red Band Society, I would love to be a part of bringing one of his stories to life. [Quentin] Tarantino, since I have worked with his early counterpart Roger Avary. I could go on, but I will stop here…for now.

Just have fun. Keep digging deeper. Keep moving forward. Enjoy the journey. Whatever you are doing now you will tell stories about later, so don’t race to get to the next step. In other words, be in the moment on and off screen.

Finally, an easy one: what’s your favorite movie of all time?

The Shawshank Redemption (1994). I saw it 7 times in the theaters back when it was a box office flop during the first theatrical release. 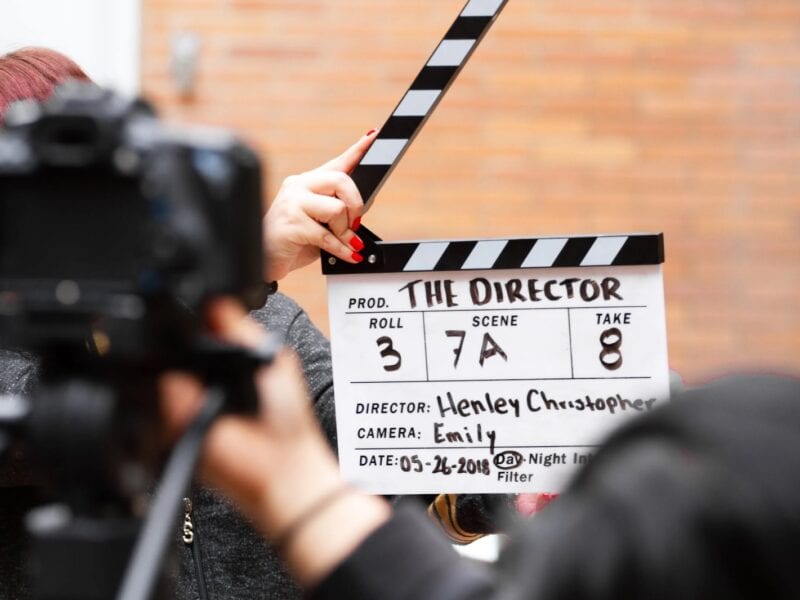 A Foolproof Way for Achieving Success Using A Video Maker