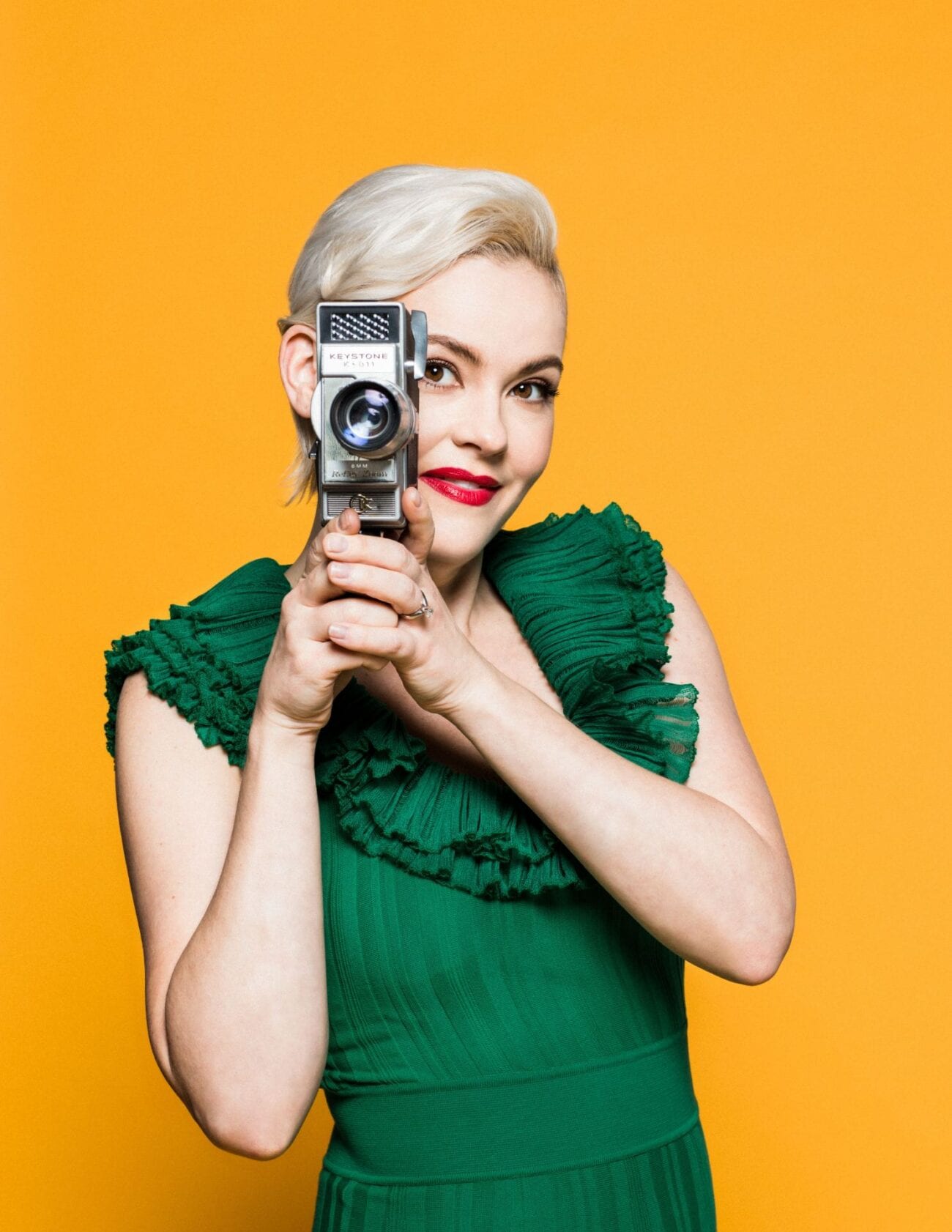 Kimmy Gatewood is a talent that can’t be contained. She got her start as an actress on shows like GLOW and Don’t Trust the B in Apartment 23, the former of which earned her SAG and Primetime Emmy nominations. She quickly transitioned to directing, and has gone on to have a very successful career with the sitcoms Crazy Ex-Girlfriend (CW) and The Baby-Sitter’s Club (Netflix), as well as short films like Navel Gazers, which won the Outstanding Sci-Fi Award at the 2021 Micheaux Film Festival.

Gatewood recently directed her first feature, Good on Paper. The film tells the story of a comedian (Illiza Shlesinger) who puts her career ahead of love, but a chance encounter with the perfect guy throws her life into a tailspin. It’s set to premiere globally on June 23, 2021.

Film Daily was fortunate enough to chat with Kimmy Gatewood about her varied career, her pivot to directing, and her plans for the future. Here’s what she had to say: 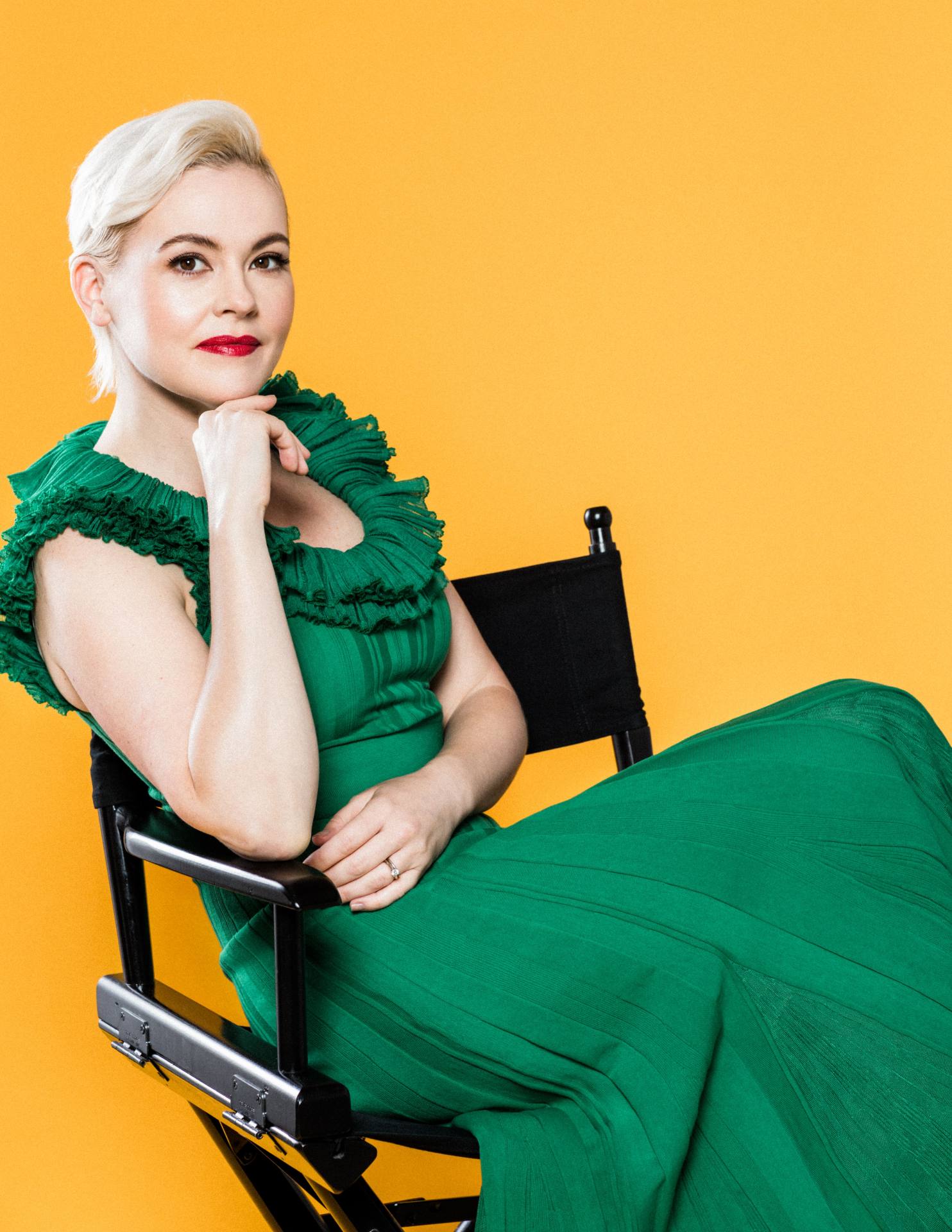 If we go all the way back, my dad is one of thirteen children, so I remember holidays were always a big deal with tons of family. We would go up to Lake Canandaigua in upstate New York every year for Labor Day, which to me equaled a captive audience. I would recruit my cousins to put on shows – and my aunts, uncles, and their partners would be forced eager to watch our dances to “Opposites Attract” and “Don’t Worry Be Happy.” I think the early days of putting on shows for family and skits at Girl Scout Camp really nurtured my love of performance.

I have recently been lucky enough to work with mentors. I think the best way to find a mentor is to observe and ask as many questions (respectfully) of someone you are working for or with. As an actor on GLOW, I was able to observe and ask questions of directors that were on our show.  Look for mentors through programs, networks or the union. The WGA offers mentors when you first join the union. Otherwise, I would reach out through social media or through friends.

You’ve directed several award-winning shorts including Consent and Control. How did working on these shorts help to define your style?

Both shorts were comedies that dealt with dark subjects. I think it’s helped define the kind of honest, brutal and always funny storytelling I would like to pursue in my features.

Control had no dialogue so the exciting challenge was to communicate a story through a single character and the world around her. I’m a huge fan of silent films so this was particularly fun to find the comedy of little tiny moments – like the moment when the woman places a letter underneath a vase. I’m obsessed with micro moments of characters that define them and tell a big story. I try to look for moments in scripts where I can pepper that in.

Consent’s visual style was inspired by David Lynch – I wanted it to feel like a fucked up fairytale. The tone of this film in particular was extremely important and a delicate balancing act. We wanted to make sure our main character didn’t come across as “crazy” as she represented a very real thing that happens. She’s certainly larger than life, but the actors did an amazing job of carrying the message and also the comedy of the film. 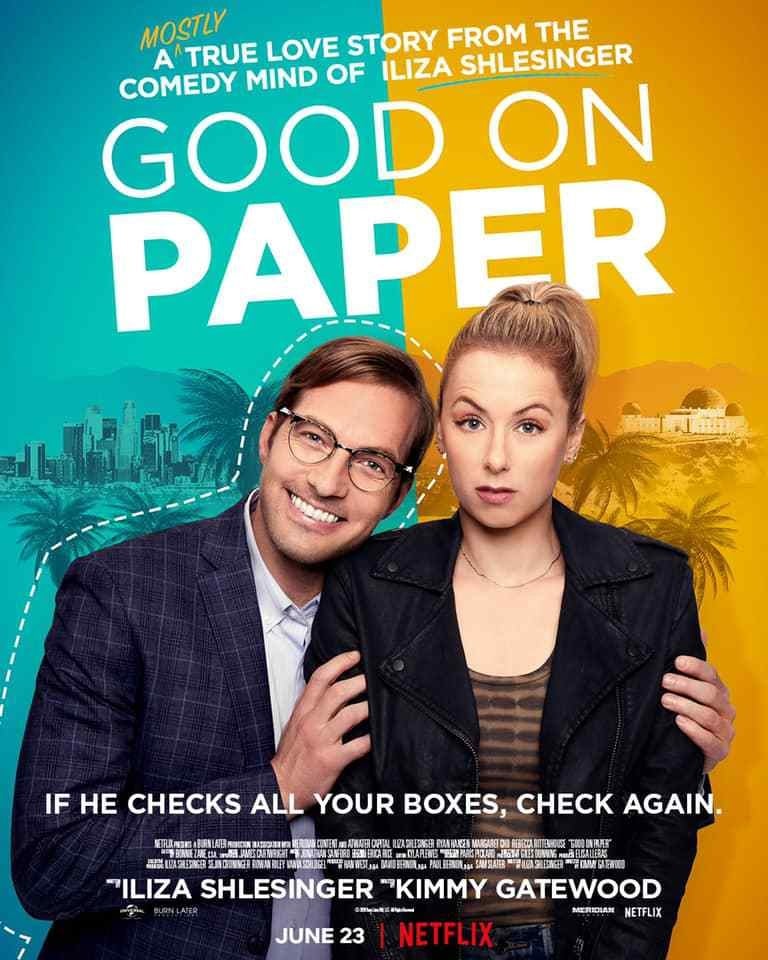 You recently made your feature directorial debut with the comedy Good on Paper. How did you initially get involved with the project?

My agent sent me the script and I knew I had to do it. I met with Iliza and the producers and it was love at first sight.

Good on Paper is written by the film’s star, Iliza Shlesinger. How closely did you work with Shlesinger on the set?

We worked very closely together. I love working with writers/performers. I started my career developing solo shows with actors and comedians. Every day we would read the scene and make any adjustments to the script so the scene would flow or if any new jokes occurred to us.

Your comedy script for Girlworld recently sold to Amazon. As a screenwriter, did you make any alterations to Good on Paper or did you leave the text unchanged?

We had a few months to develop Good on Paper before shooting. This story is based on Iliza’s real life story, so it was fun to dig deeper together. We added a couple of scenes like the dance club and the bathroom scene that I think ended up being really special to the film.

Do you allow room for improvisation on the set or do you prefer to stick to the words on the written page?

I come from an improv comedy background, so I absolutely love improv on set. It’s important to get the written words at least once, but sometimes a little improvised entrance or exit can make a scene sing. And as a writer/director, it’s always a joy/relief when an actor can make something funnier, better by adding their own spin.

You’ve directed countless TV episodes for The Baby-Sitters Club and Timeline. What’s the biggest difference between directing for film and TV?

The biggest difference between TV and film is that as a TV director, you are servicing one part of a bigger story. Each episode is it’s own story, but also a part of a much bigger story. Depending on what episode or episodes you direct, it’s important to rely on the writers and actors for where their character came from and where they are going.

I directed half the season of Baby-Sitters Club Season 2, so I was much more involved in the bigger stories as well. As for film, you are very much the captain of the ship. It’s like writing a novel. You’re telling one big story and the story must come to a satisfying ending. As a film director, you create the whole world, the characters, and the relationships.

What do you consider to be the most difficult part of directing?

For me, the challenging parts of directing are what I love the most. You are always up against a time crunch, a budget issue, a location fell through and you have to rearrange the schedule, cut pages or rewrite – but I love that kind of creative problem solving. I guess the hardest part of directing is when you’re not able to get something made. There are so many genius movie scripts sitting in hard drives that I wish I could see or make!

What’s your mission as a storyteller? Name the most important thing you want viewers to experience when watching Good on Paper.

As a storyteller, I want to create conversations, but above all, tell comedic stories of strong, complicated women. I am definitely tired of getting script notes about “likeability” for female characters. Good on Paper is about perception – how Andrea perceives herself, how she wants to be seen. She doesn’t see herself as successful enough. So when this guy comes into her life who she sees as a harmless outsider, and he tells her she’s everything she wants to be, she falls for him.

You’ve acted in several popular projects, including the Emmy-nominated series GLOW. Do you feel that your acting experience has made you a better director?

Absolutely. I know what it’s like being an actor – there’s a lot of pressure and it’s a lot of “hurry up and wait.”  Half the time as an actor, you don’t know what the shot is or if you’re even in it. I like to communicate with the actors and provide a stage for them to feel free to play – that’s what we are doing after all, playing dress up and make believe on film.

Do you foresee a time where you work exclusively behind the camera or will you always want to act?

I will never close the door on acting, but right now I’m not actively seeking out any roles. I do make an appearance on the upcoming season of Baby-Sitters Club (I knew the director *WINK WINK*) 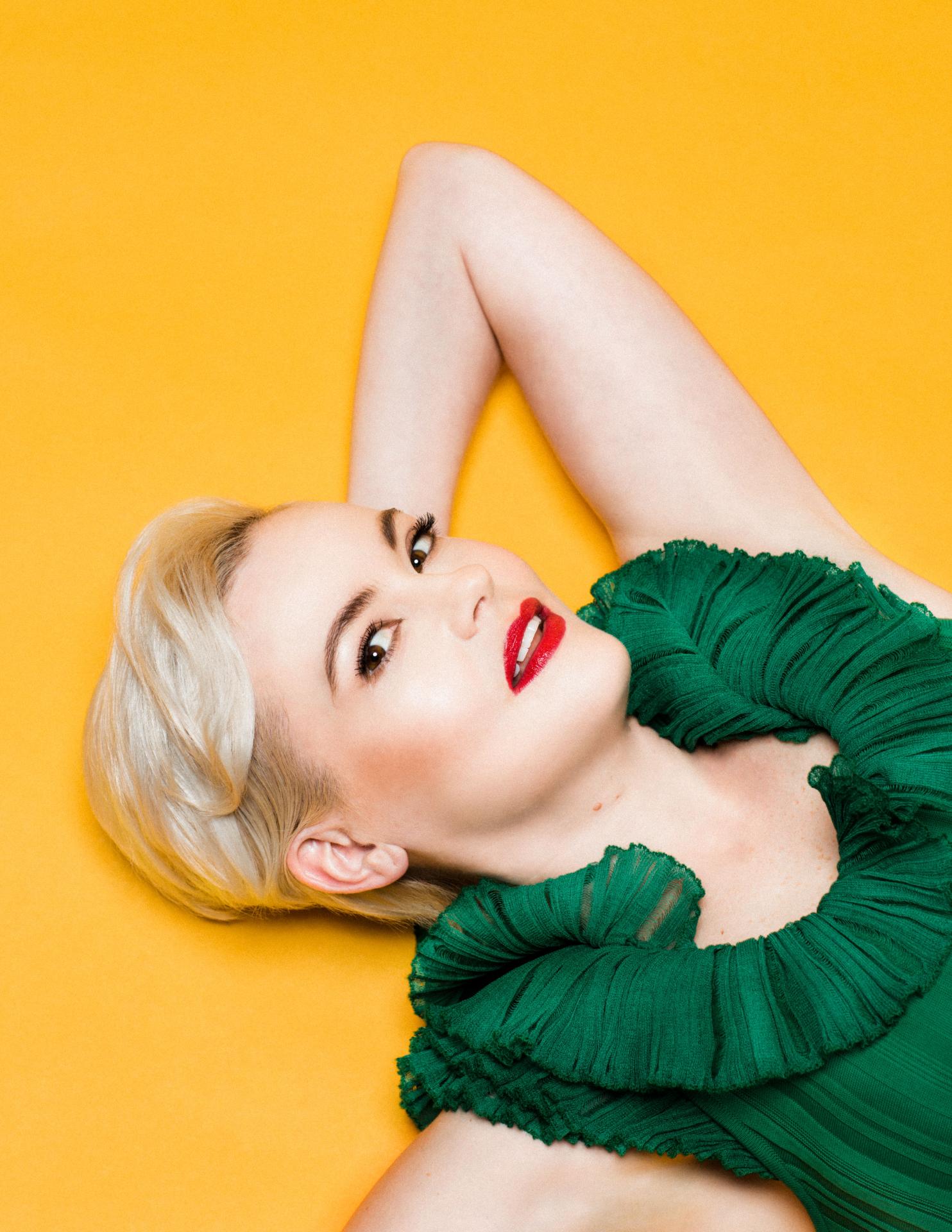 What is your greatest professional success?

Wow, that is a hard question! I would certainly put Good on Paper and GLOW in that category. Good on Paper is my first feature and I’m so proud of it. GLOW was my big break. On a personal level, my comedy group the Apple Sisters is where it all started. Myself, Sarah Lowe, and GLOW pal Rebekka Johnson started the group because we wanted to do a show where we could sing, dance, and act like idiots.

The Apple Sisters is a 1940s comedy radio trio that is song, slapstick and satire. We have been writing and performing for 13 years and continue to do live shows when we can. We have done everything from making appearances on Conan, Bridesmaids, A Christmas Story Live, opening for Ryan Gosling’s band to performing for Rebekka’s grandma in her nursing home. It’s one of my proudest collaborations and I hope we will be performing at our own nursing homes one day.

I don’t consider this a failure, even though it felt like one at the time. I tested (which means the final audition) for Saturday Night Live. Stepping onto the Stage at 8H was one of the most exciting and nerve wracking experiences of my life. SNL is why I got into the business and it’s everything I aspired to do.  I could join Gilda [Radner] and Tina [Fey] and Amy [Poehler] and Kristen [Wiig]!

Everything I had done was leading to this moment and then…I didn’t get it. I was devastated. It was one of the biggest professional heartbreaks of my life. But what I learned is to keep moving forward. I had to redream what my future was going to look like and it wasn’t easy, but it ultimately led me to directing. And this past year I got to direct Girls5Eva which is executive produced by Tina Fey.

First and foremost, please watch Good on Paper which will be premiering globally June 23rd on Netflix. I have a short film Navel Gazers which is currently on the festival circuit, written by Annie Mebane that recently won Outstanding Sci-Fi at the Micheaux Film Festival. I also directed Season 2 of Baby-Sitters Club and will be reprising my role as Coach Crowley in Season 4 of Atypical.

What advice do you have for aspiring filmmakers/actors?

My advice to young filmmakers is to continue creating and making your own stuff. No matter what level you are at professionally, we are our own biggest advocates for stories, scripts, films, actors, etc. And listen to those who know – listen when they tell you that you are doing a great job and listen when they say you still need to develop something. You can always make something better.

The one that I tell film buffs is Cleo from 5 to 7, the one I still quote and sing obsessively is Singin’ in the Rain, but in my heart of hearts it’s Pee Wee’s Big Adventure.