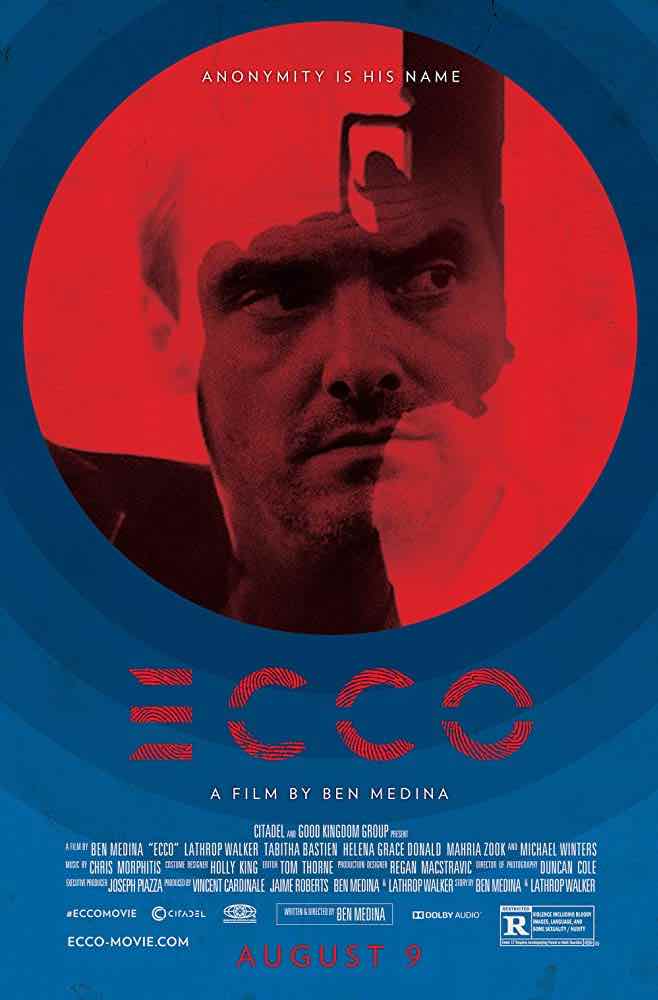 Michael (Lathrop Walker) is a ghost. Living in the shadows with his new family, years away from his past life as a covert assassin, his peace and anonymity are shattered when his former employers return to bury their last surviving operative. With his truth exposed, Michael must protect his family and pursue his only chance at redemption by hunting down those behind the organization where all his sins were born.

Ecco is a singular thriller in the tradition of Drive, Hanna, and Tinker, Tailor, Soldier, Spy, helmed by a visionary director about to break big. It’s a thinking person’s action film filled with cinematic signatures and unexpected plot turns. Medina is a director to watch and we guarantee his feature debut will not be forgotten. We were stoked to sit down with Ben Medina himself and talk filmmaking, Ecco, and more.

My journey as filmmaker began at 14 years old, when I became the apprentice to photographer Paul Boyer. It was one of the most extraordinary opportunities in my life, to learn by intense observation and immediate application with a master of lighting and all formats of photography.

Boyer taught me how to earn the right to shoot every single frame of film, how to respect and become proficient in 35mm, medium format, and 4×5 formats, and he provided the opportunity to work in the darkroom, with both color and black & white. This confluence of in-depth technical education and his profound appreciation for how to light a human being fueled the foundation for my aesthetics as a director.

After many years of shooting, I emerged in my late teens and early 20s with a strong desire to take my vision into motion, and shot a very small, low-budget short film about a prizefighter who is killed in the ring. I shot the film on Super 16mm, using Kodak short ends. After the first day of shooting, I knew my calling.

My early influencers were primarily photographers and painters, whose work I studied obsessively – not only their work, but their journey into the craft and their careers. My favorite shooters include: Henri Cartier Bresson, Galen Rowell, Robert Frank, Arthur Penn, Sally Mann, and Robert Capa. Among painters, those that captivated my attention (and still do) included: Caravaggio, Andrew Wyeth, Titian, Chuck Close, and George Bellows.

I was extremely fascinated by the partnership in creating the image and knew that my vision for my projects was dominant, but collaborative. These creative partnerships listed above have, mostly, lasted for years, through many films. I was very influenced by understanding how to build that relationship with my cameraman to maximize the visual journey and minimize communication to achieve stellar results on screen.

How did you find working on Ecco? What did you learn from the experience?

Bringing Ecco to life was an experience that created a monumental sense of achievement and reckoning. It was achieving a dream and discovering the limitlessness of the obsession of this work.

I found the entire process, from treatment to signing off on sound mixes and marketing creative, to be a culmination of a years-long journey. And yet, there is nothing I want in my life more than to begin shooting my next film, and work with all of the same people again who brought so much sweat, blood, and passion to Ecco’s existence.

Any filmmaker, fresh film school greenhorn, or seasoned studio helmer can attest to the finish line being everything. When you complete, you will have made it to the top of your summit, and if it didn’t break you, you will want to climb again: faster, smarter, swifter at decision-making – taking that confidence into the next endeavor.

I learned that, with an incredible team supporting every aspect of the process, you can achieve an impossible feat and be stronger on your next project. I know I am, and we all are.

Tell us about your career pre-movies.

After the prizefighter short film was complete, I followed the advice of a long-time friend and cinematographer and pivoted away from independent filmmaking into commercial directing. I took my dark, artsy fight film and shopped it to advertising agencies as my director’s reel. An agency in Seattle dug the film and hired me the next day to work in their creative department as a director/cinematographer.

This led to my commercial directing career evolving and expanding, with work in LA, New York, Montreal, London, Mexico, Sydney, and New Zealand. It was an exceptional training ground and preparation for my dream to move on to feature films. It taught me how to develop ideas, fight for the right ones, kill the other ones, and manage a budget – and most importantly: put all the production value on screen.

I reflect on that period of time with gratitude for the many producers, agencies, and collaborators who trusted me. I will never forget each spot I wrote and directed, each chance that was taken on my execution. If I hadn’t found success as a commercial director, I would never have developed the tools of the trade to rise and helm features. It solidified a concrete foundation of responsibility and execution.

Where did the concept come from for Ecco?

The concept for Ecco was born from working to carve out a new story in a weathered genre: looking deep inside the soul of the main character, Michael, and building a visual and sound experience that crosses genres for the audience. The original idea was to structure a multi-layered story about a man with lethal skills, his regrets, and the ability to start a new life in the face of the wake he has left behind him.

The idea arose out of not seeing accessible protagonists in this genre whose armor and past lives are left to mystery. How can a trained killer’s humanity be shared with the audience? How could they see into his darkness and empathize with his life? This is where the story started.

The journey for creating a film begins differently for every director, each with his or her own approach and strategy to ingest and invest in the story and the material. My process begins with spending months honing the script, the voices in each character, and the depth and dynamics in the rhythm of the dialogue.

There must be a style to their voices, their words, and the cadence of how they reach out for what they want, and the secrets behind what they do not say.

In parallel with the script, I develop the visual language of the film, the compositional framework and overall aesthetics for the film. I have always been very, very specific about every shot. For example, I storyboard most sequences in full and call every lens on set.

After this process, we begin casting, which aligns both the best actor for the characters in the highly developed script and their performance styles to fit within the framework of my aesthetics. From there we source locations, structure our operating budget, and are on our way.

My only tips would be: write what you can shoot, shoot what you can finish, stand behind the work, and learn from your blunders openly & honestly.

This entire process is an earned privilege. To be at the helm of any film is a tremendous responsibility and honor. I do my utmost to prepare all aspects of my involvement far, far in advance of principal photography, so the shoot can offer creative opportunities with the actors and the pace of a shooting day can adapt.

And in post-production, I change gears, working like an engineer with structured milestones and diligence throughout finishing.

My next film is a neo-crime thriller with interwoven narratives driven by the protagonist, a lone wolf detective who crosses the hard blue line of the law to solve a years-long cold case.

I arrived on the filmmaking path through photography and acting, never setting out from the beginning to become a director. But as my life experience and perception of humanity evolved, it became necessary to write and share the visions that were generating in my mind.

My mentors were photographers, acting professors, and a couple of cinematographers. But I never sought out or created relationships with working directors or writers. Each artist’s process is very, very specific, and frankly, I never felt the invitation from directors I have met to offer their mentorship.

Perhaps this has been my experience: to build a career on the outside, through commercials, and carve my own style of working. The closest I have come to filmmaker mentorships is reading nearly every interview archive and studying the work of cinema’s greatest directors, obsessively.

From the beginning of script development through signing off on end credits, I try to deliver on the promise to create a contained world for the characters and the depth of their souls that are exposed within the story. This involves a highly layered screenplay and crafting imagery that pays off the world of the film.

Ideally, the audience will want to see the film again, to connect all the dots and details of every clue on screen, and truly see the entire picture as a story that evolves with every viewing.

Television, now, is an intriguing and provocative space for awesome storytelling for sure. At this point, my primary focus is on my original feature material. However, if a great script or concept presented itself, with the right team behind it, I would be open to a longer format.

Beyond the US and foreign theatrical release of Ecco, which is an incredible conclusion to a long, amazing journey, I have a few projects that are lined up over the next two years.

Currently, we are in pre-production and design for my next feature, which begins principal photography in late October. It’s a dark detective crime thriller with a fantastic cast and an incredible design team that carries over our work together on Ecco.

This is a great question. The film on the “favorite” throne has not been unseated for many years, although the remaining top ten have shuffled every 3 years or so.

My favorite film of all time is Michael Mann’s Heat. From my first viewing to a consistent studying of the film over the years, it continues to open up as a film in the depth of the character relationships, their histories leading to their convergence, the technical specificity of every aspect of the film, and its timelessness in craft & execution.

Find out more about Ecco here.

If you’re in California, you can see the movie here: 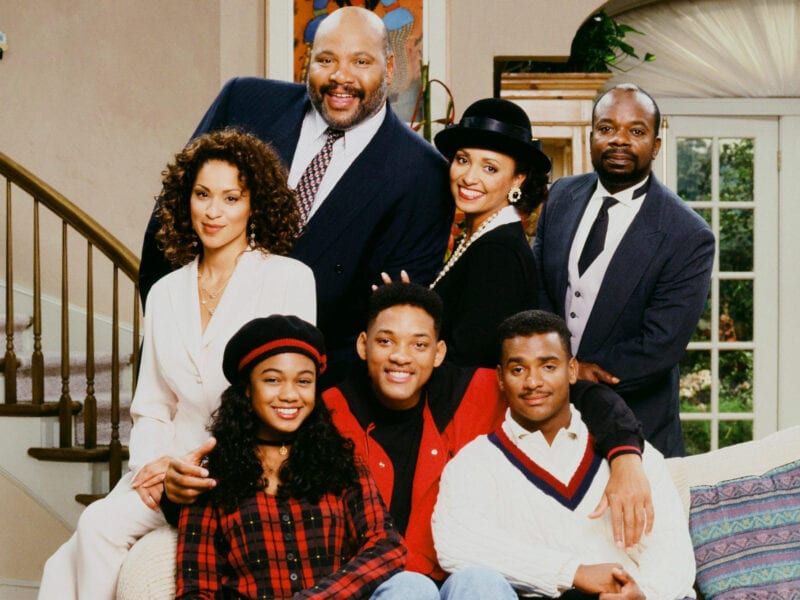 New fresh hell: WTF is up with the ‘Fresh Prince of Bel Air’ reboot?