The ‘Deadwood’ movie could make up for the failings of ‘Westworld’

May 2019 is Deadwood the Movie month in our office. To celebrate, we’re looking back at this piece we published when we first heard our Western prayers had been answered.

Welcome (back) to fucking Deadwood, ladies and gentlemen! After years of rumors, speculation, and a whole heap of well-wishing from fans, HBO is finally and officially moving forward with the Deadwood movie. HBO programming president Casey Bloys revealed the news at the TCA summer press tour and highlighted the entire process has been appropriately hellish but worthwhile. “It’s been a logistics nightmare getting all the cast members’ schedules together, but we are there. It is greenlit.”

The movie is currently scheduled to start shooting in October for a spring 2019 air date that isn’t “set in stone”, according to Bloys who praised the script from creator David Milch. “I wanted a script that would stand on its own . . . I’m happy to say that David totally delivered on that. It’s a terrific script.” The logistical nightmare of bringing the cast back for the movie is understandable when you remember how amazing the ensemble cast is and how busy they’ve remained since the show ended in 2006. 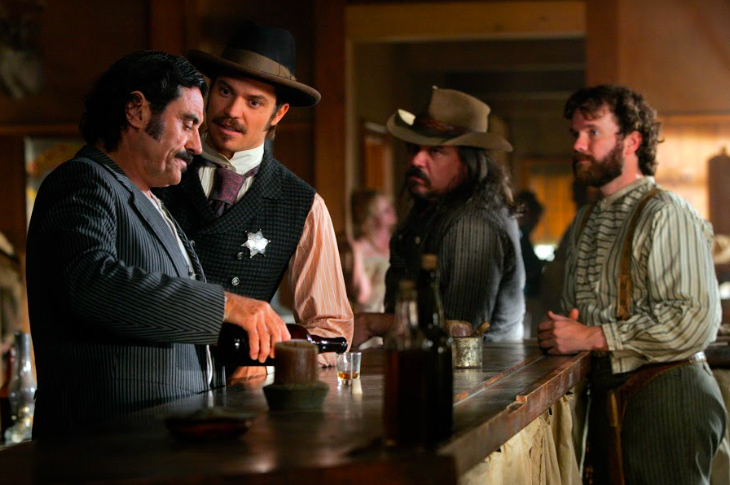 Ian McShane is currently starring in American Gods (and making the occasionally brusque offhand insult regarding Game of Thrones), Timothy Olyphant is currently starring in Quentin Tarantino’s Once Upon a Time in Hollywood and starring in the Netflix Originals comedy Santa Clarita Diet, and John Hawkes has continued to be one of the most prolific character actors in the industry, having recently appeared in Three Billboards Outside Ebbing, Missouri. And that’s just a small sample of the show’s main cast, which includes Brad Dourif, Molly Parker, and Robin Weigert.

Speaking to Entertainment Weekly about her return to Deadwood as the messy but loveable Calamity Jane, Weigert called the movie announcement “such a spectacular moment”. She also speculated upon what shape her iconic character may be in when we see her again: “I would imagine I’ll find her very much where I left her, except everything might feel a little bit more urgent. She might be even deeper into alcohol.”

Suffice to say we’re stupendously hyped about the news and have been pining for a continuation of the story that most fans believe was axed well ahead of its rightful time. The recent production of HBO’s reboot of Westworld has only heightened our passion for the show, providing a harsh reminder of a Western narrative that we’d argue is miles ahead of the Jonathan Nolan-led show. 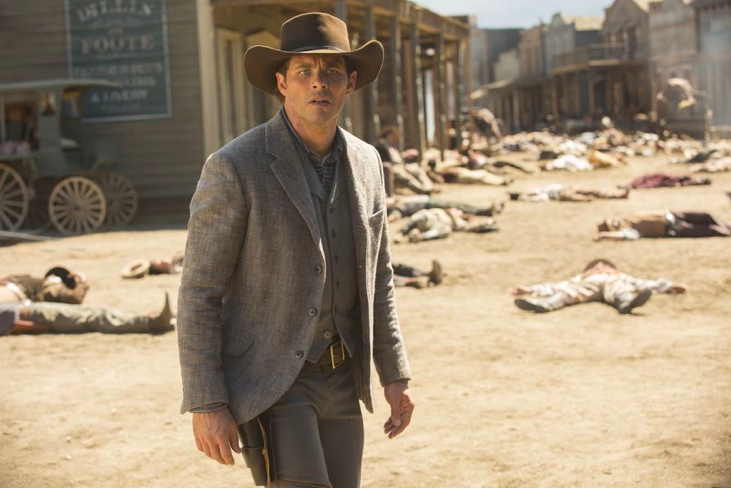 Don’t get us wrong, there’s a lot that we love about Westworld. It has two of the most complex and fascinating female characters currently on TV in the shape of Dolores (Evan Rachel Wood) and Maeve (Thandie Newton) and we appreciate much of the underlying philosophies and meta-storytelling. But the show has also recently come under fire for its overly convoluted plot and a S2 finale that we argued indicated how Westworld has jumped the shark.

The show might not be a straight up Western by any stretch of the imagination (in fact, it offers more of an interesting subversion of Western tropes than a direct embracing of them), but it’s enough that we can still see echoes of Deadwood rambling around the artificial stretches of Sweetwater. Every time the show stumbles in its time-jumping meta-story, a little piece of our hearts ache for the linear sincerity of Deadwood – all the way from Calamity Jane’s gun-slinging hangovers to the torment of Al Swearengen’s kidney stones.

There’s no pompous narrative grandstanding or pretentious navel-gazing at its own extraordinary genius – Deadwood is a straight-shooting, irreverent, occasionally hilarious, and occasionally horrifying slice of Western life that doesn’t fuck around. And holy shit, we’ll be so happy to step back into its savage little blood strewn streets. Not a single host in sight.