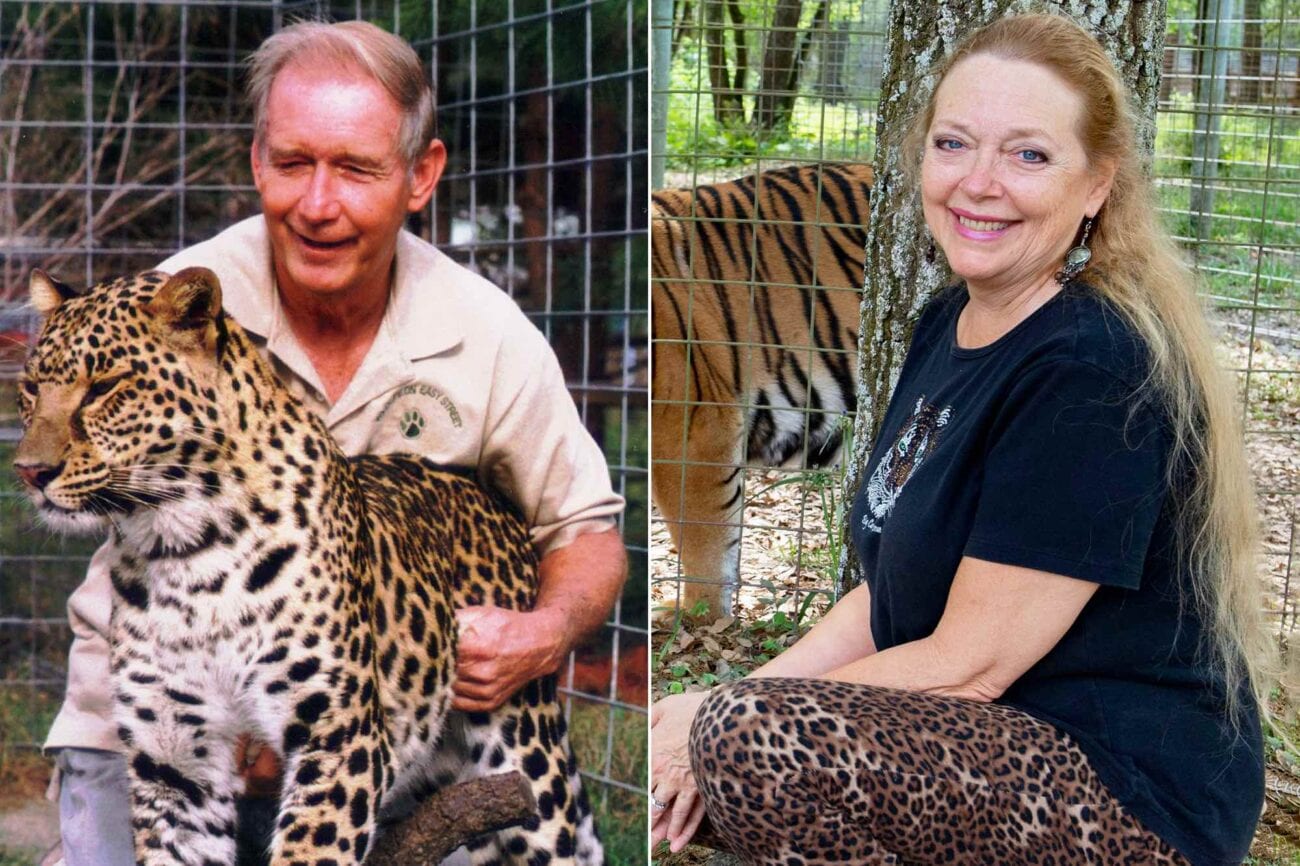 Got info on Carole Baskin’s dead husband? You’ll get 100 grand

The legacy of Netflix’s popular series, Tiger King, is far from over – a cultural phenomenon which became saturated with memes, controversy, and now, the reemergence of a real-life missing persons case.

Do you remember Carole Baskin? One of the stars of Tiger King, and sworn enemy of Joe Exotic, the “Tiger King” himself. Aside from owning Big Cat Rescue Corp. in Tampa Florida, Baskin went after Joe for what she believed were numerous accounts of animal cruelty, and arguably, some of his funds too.

Joe was imprisoned earlier this year for his involvement in a murder-for-hire plot against Baskin. Joe even fueled a conspiracy around one other controversial detail: Carole’s missing second husband. Now back in the spotlight, this is one point set for a big payout. 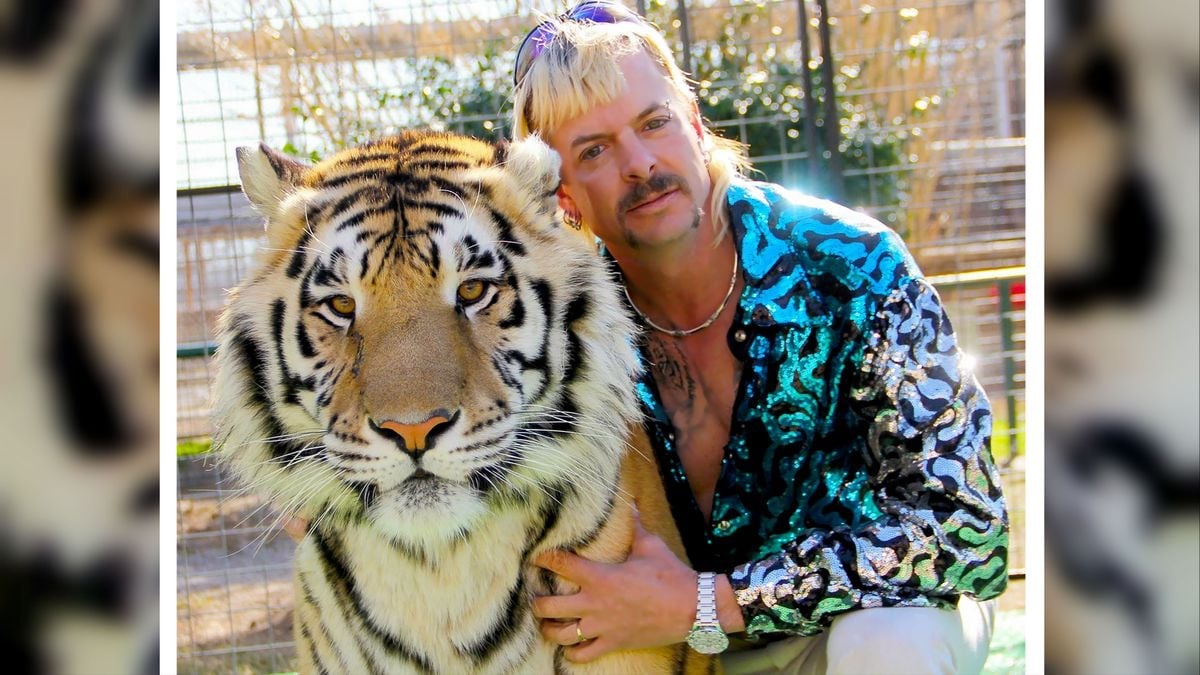 Throughout Tiger King, Baskin was always subject to scrutiny and attacks by Joe Exotic for her role in attempting to close down Joe’s zoo – the Greater Wynnewood Exotic Animal Park in Oklahoma.

Aside from making retaliation videos, threatening armed defence of his property, and accusing Baskin of hypocrisy for her own drive to profit off captive tigers, Joe had one more weapon in his arsenal – the accusation against Carole of murdering her former husband, Jack “Don” Lewis. 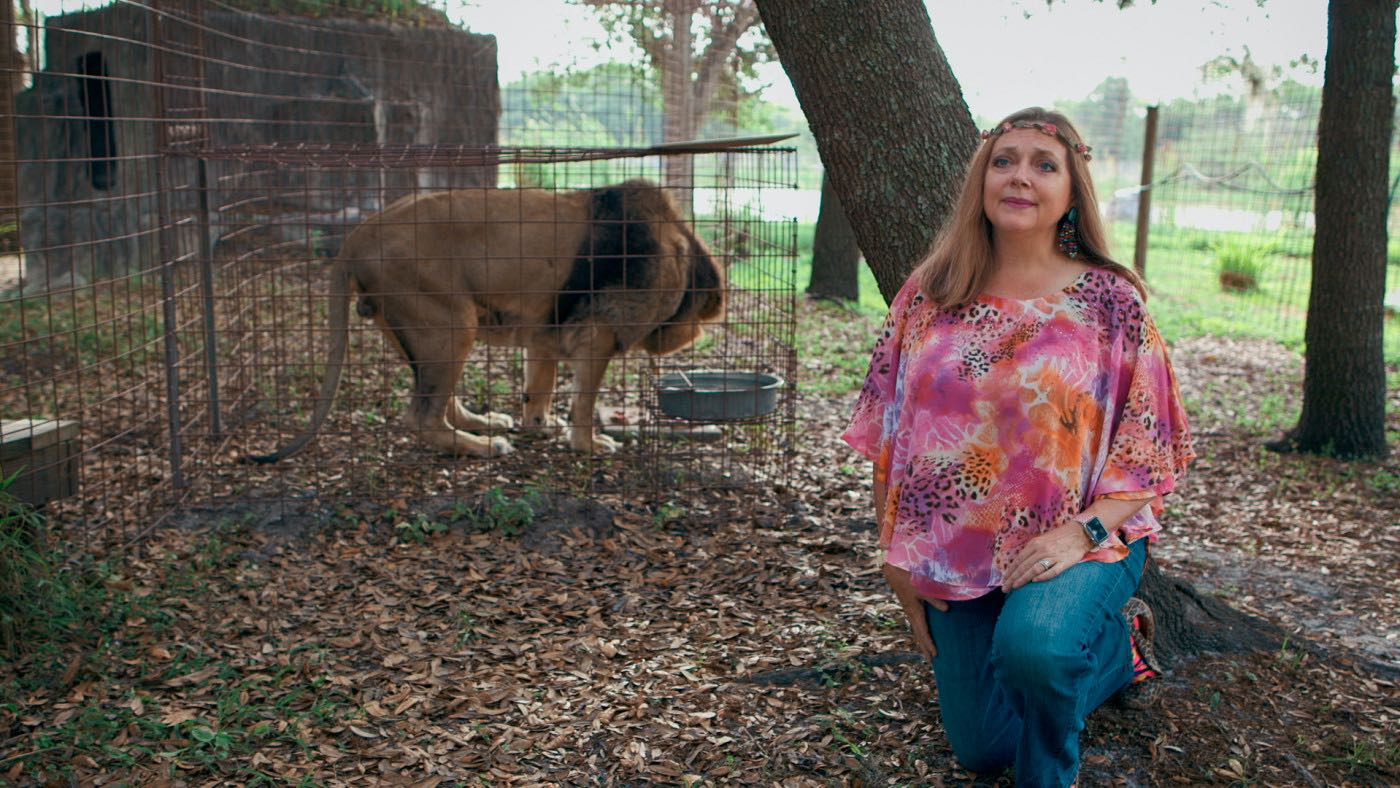 Carole Baskin and her current husband, Howard, were married in 2004 and used their resources to found and maintain Big Cat Rescue. Besides being featured on Tiger King, the couple have also profited from the release of the documentary, despite their public outcry of being misled by the show’s failure to expose abuses in the captive tiger trade.

But before Carole began her life with Howard – who now live as semi-famous multi-millionaires – she was a victim of some questionable characters, like Don Lewis. Baskin met Lewis at the same time she ran away from her first husband, Michael Murdock.

Baskin & Murdock had a child together in 1980, but calling her first husband “extremely abusive,” Baskin fled on a day in 1981 – and immediately ran into Lewis. Carole and Lewis were married soon after, while both were also still married to the significant others they left at the time, marking the beginning of another tumultuous relationship. 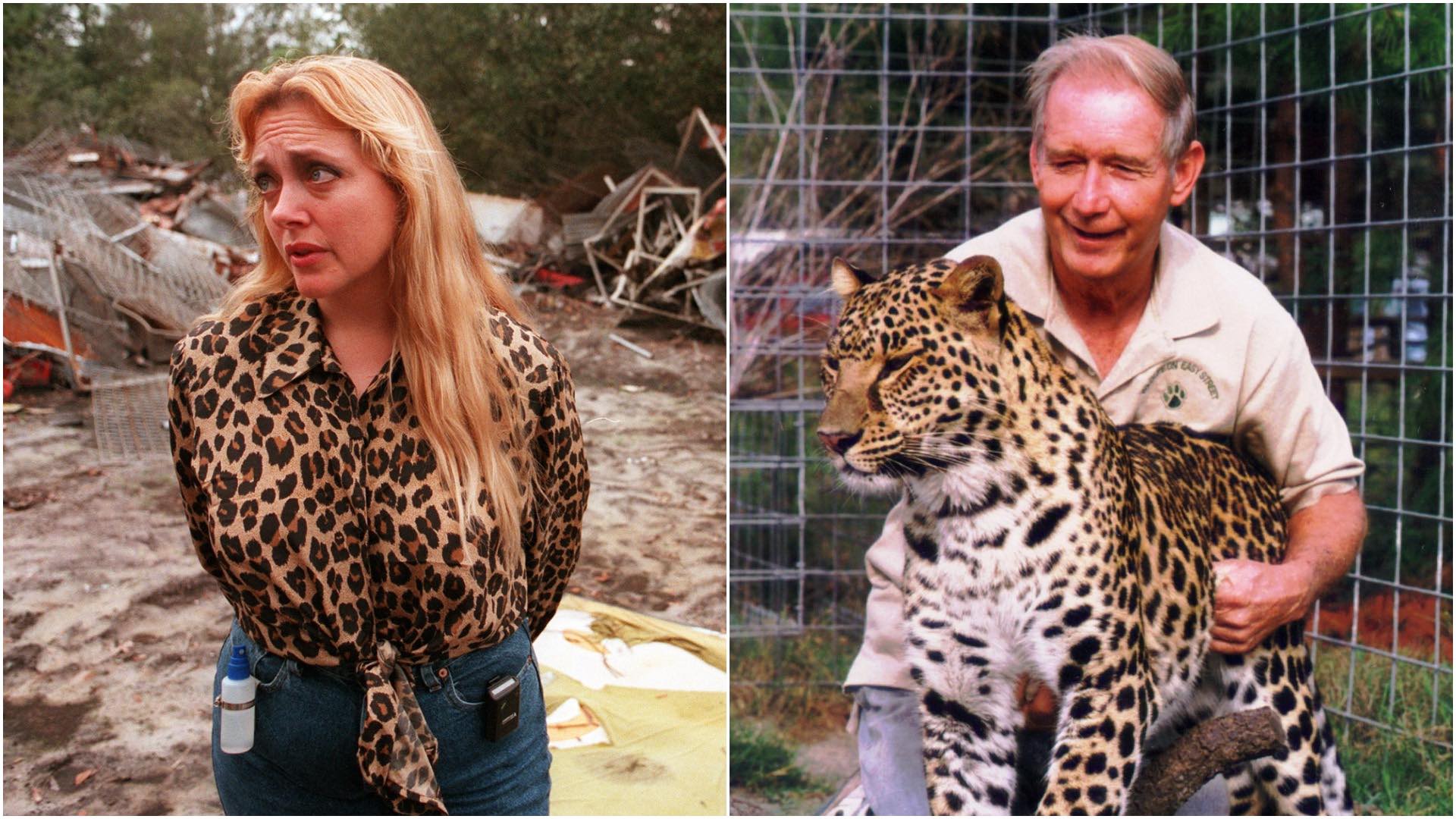 Sharing a mutual love for animals, the couple bought a sanctuary and their first big cats in 1991 – however, Carole disagreed with Lewis’s attitude as an “animal collector.” Lewis would make frequent, often unscheduled flights to Costa Rica, leaving Carole behind. During these trips, Carol would often sabotage her husband’s breeding efforts.

The couple soon turned to constant fighting, and grew more distant. Carole described Lewis as “obsessed with sex” and even alleged he would travel to Costa Rica for more pleasure than business – he cheated on her frequently, and without shame. 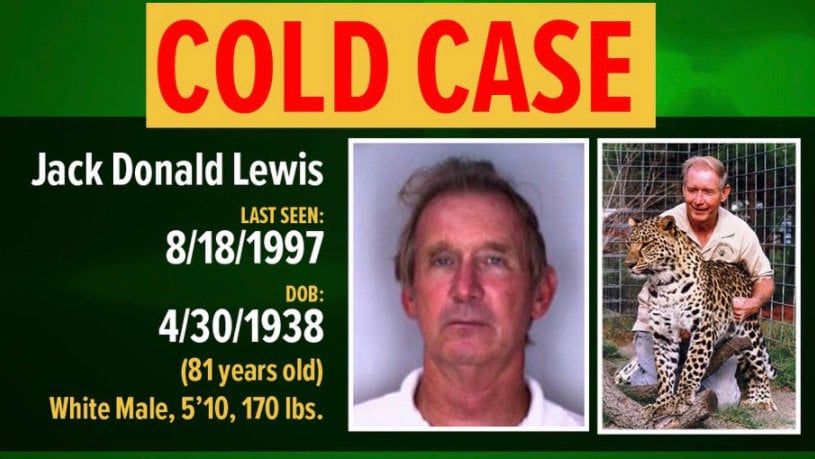 Lewis continued this trend, allegedly developing a long-term girlfriend in Costa Rica, and, according to Baskin, planned to move there and take his money with him. Lewis also threatened Carol with a restraining order and a divorce – the cherry atop his erratic sundae.

In 1997 Lewis left for Costa Rica by way of Miami – he was never seen again. After an extensive search, Lewis was declared legally dead in 2002, leaving his wealth, big cats, and sanctuary all to Carole Baskin. 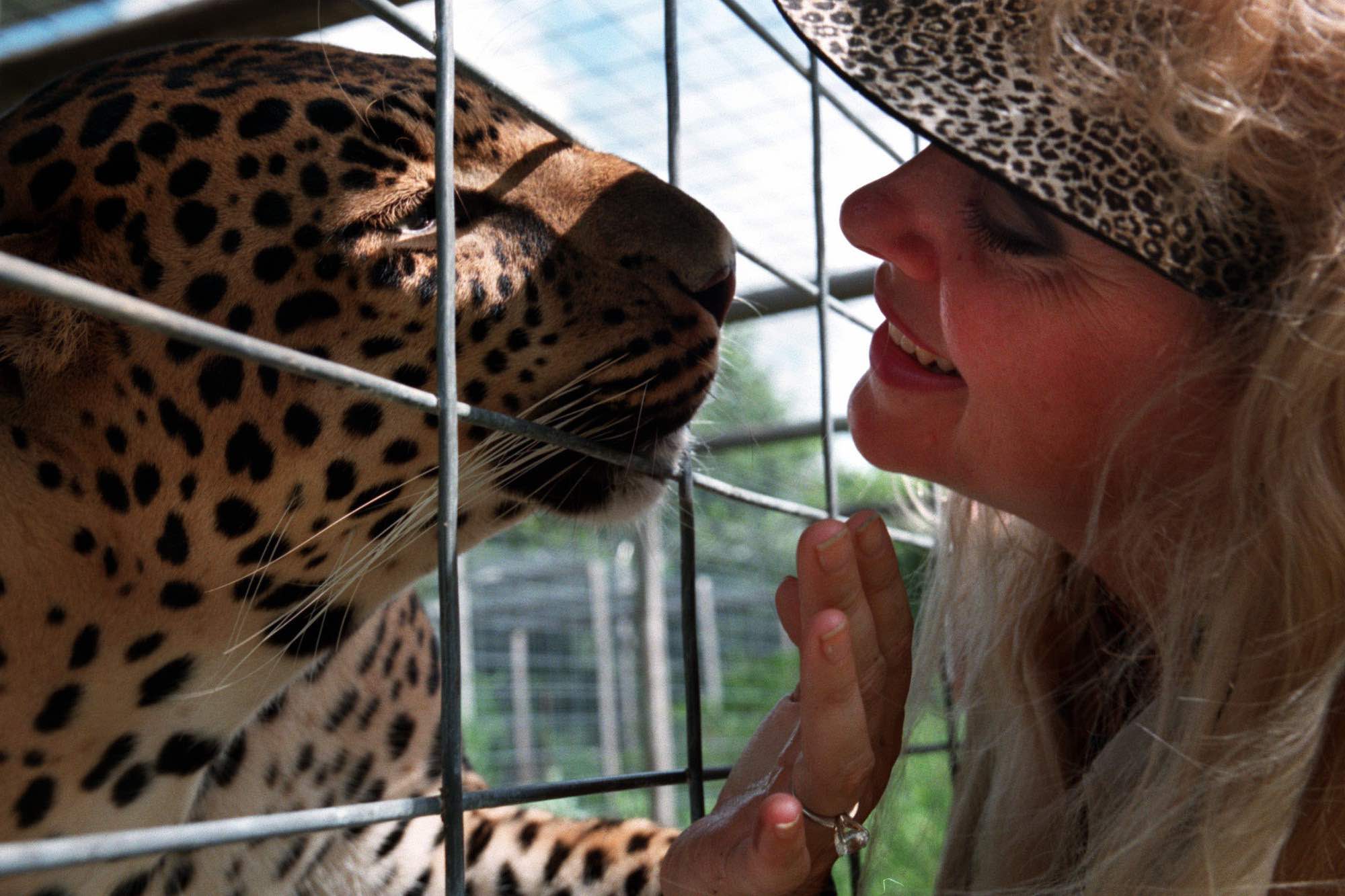 Since the release of Tiger King in 2020, maybe fans have joined the bandwagon promoted by Joe Exotic – using Carole’s inheritance, demeanor, and even arbitrary evidence – like a meat grinder pictured in the background of one episode – to accuse Carole of murdering Don and feeding him to the tigers.

Carole, along with current husband Howard, have denied any such claims of foul play. But Lewis’s biological family – the one he ditched to be with Carole – have something else to say. With the show’s success putting Don Lewis back into the public eye, his family has used the opportunity to bring attention back to his case.

This past Monday, a news conference was held by the family’s lawyer, Attorney John Philips, announcing two things: a planned private investigation into the disappearance, and a lawsuit against Carole Baskin. They are asking for a deposition to attain her comments surrounding Don, on-record. 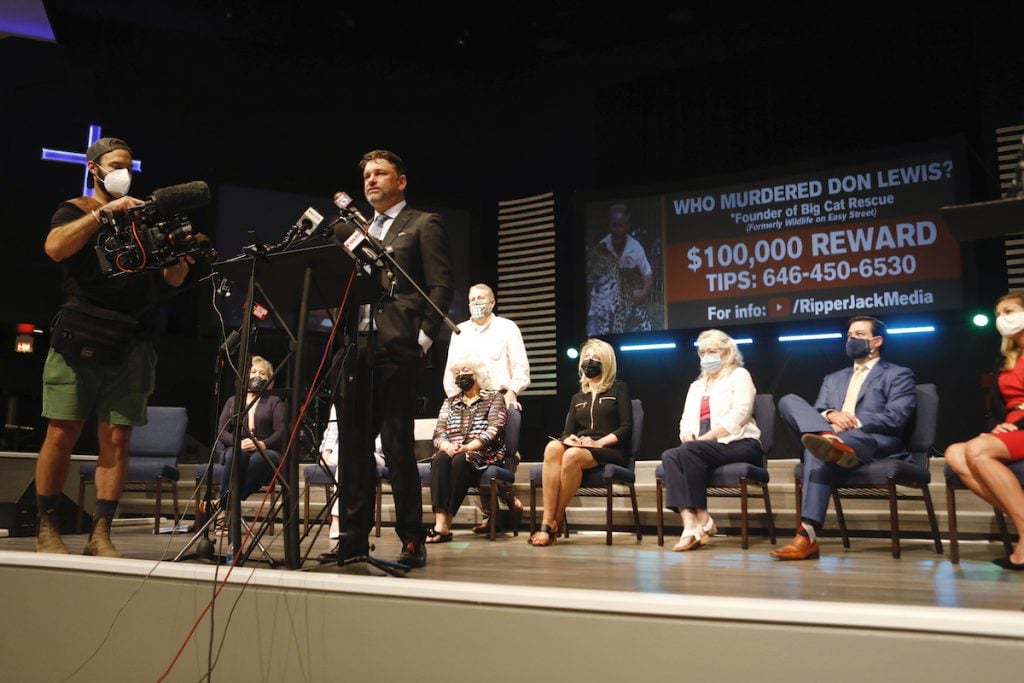 At the news conference were several of Lewis’s daughters, including Gale Rathbone, who was quoted, “Our search for closure and truth has become your mission also,” addressing attendees and those who viewed Tiger King.

Carole Baskin didn’t make an official statement addressing the comments at the press conference, having admitted, “I had told some news outlets that I thought the press conference on Aug. 10 was just a publicity stunt, but at that time was not aware there would be pending litigation.”

This past March, the Hillsborough County sheriff’s office in Florida reopened Lewis’s case and is asking for anyone with information to step forward. Lewis’s family is also offering a 100 grand reward – that’s right, $100,000 – for any critical information in the case. So rack your brains and start rewatching Tiger King – someone’s getting that cash.

If you’ve managed to miss the action that is Tiger King, you can check up on everything you need to know about Don Lewis’ disappearance here.