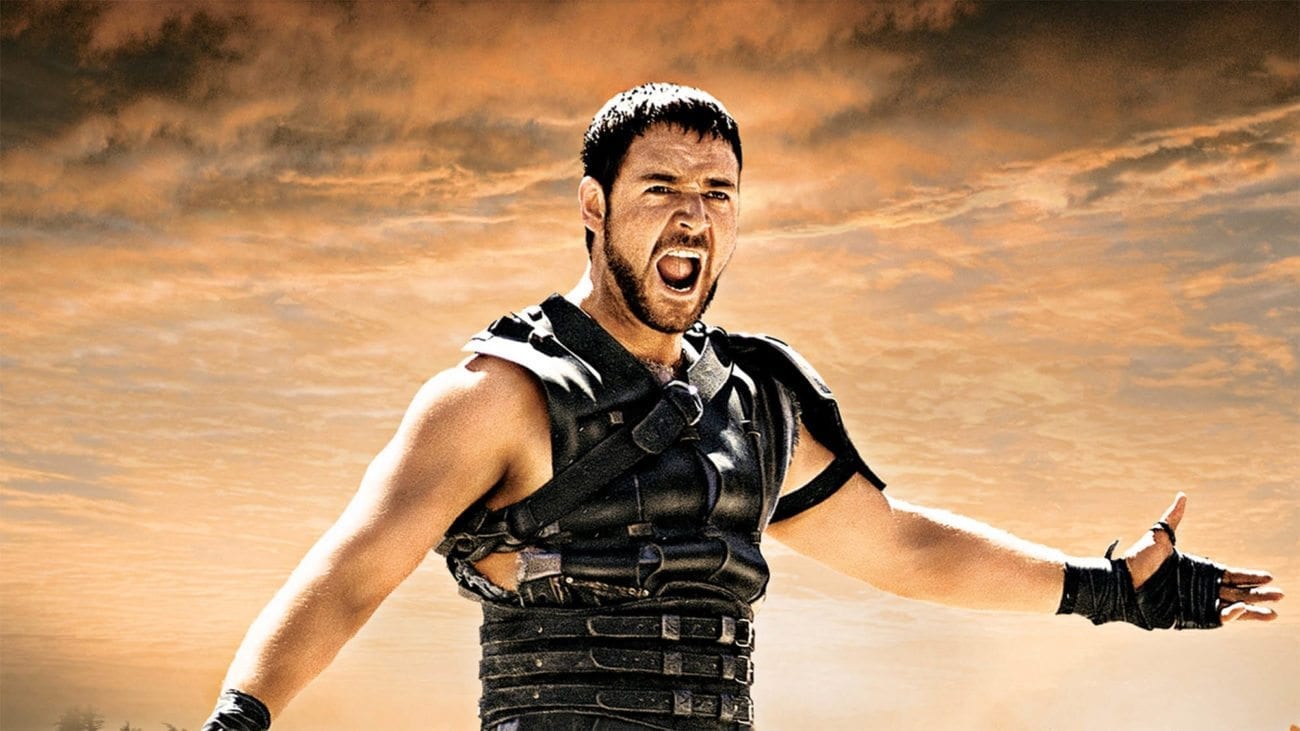 Fun fact: Ridley Scott’s Gladiator premiered eighteen years ago on May 2nd in Los Angeles. As well as making people everywhere come to the unnerving realization that Joaquin Phoenix (even at his most bloated and despicable) still makes for an incredibly alluring villain, the movie also woke the world up to the victorious talents of Russell Crowe as Maximus Decimus Meridius (quite the mouthful of a name, we’re sure you’ll agree).

It’s the role for which Crowe won his first and only Oscar (though he’s been nominated twice since for his performances in A Beautiful Mind and The Insider) and admittedly it’s also one of his least outrageous roles in a career full of jaw-dropping, violent, and downright bizarre performances that we absolutely adore.

Crowe is always one or the other – thoughtful and Oscar-worthy or utterly batshit unhinged. Frankly, we love him either way, but we have a particular soft spot for those performances in which Crowe lets loose a little and lets his freak flag fly. Here are ten of his most outrageous performances, ranked.

Playing an FBI Agent with a luscious head of non-regulation hair, Crowe is always just teetering on the edge of insanity as a man investigating the death of his partner while simultaneously trying to win back his kidnapped son from a mean Mafioso (Michael Lerner). Frank A. Cappello’s crime drama is stacked full of moments that allow for Crowe to make his eyes crazier than ever and to showcase that boy, that man can run!

Playing the foil to Ryan Gosling’s hapless private dick, Crowe is a little more subdued than usual in Shane Black’s eccentric crime comedy. However, that’s still about ten times the daily recommended allowance of insanity than most actors dare to depict on screen. His violent exploits may be more low-key than usual in The Nice Guys, but Crowe is still as bombastic and outrageous as ever.

Firstly, get a load of Crowe’s sideburns and quiff combo because if that’s not an outrageous look, we don’t know what is. Secondly, that’s probably the most outrageous part of his performance in Craig Lahiff’s road movie about a criminal couple on the run from the law, an arranged marriage, and a criminal gang.

More noble than outrageous, Crowe nonetheless packs a punch as a man literally fighting for vengeance against a corrupt, psychotic leader.

Maybe it’s the costume, maybe it’s seeing Crowe ride on the back of some sort of giant winged beast, or maybe it’s seeing him become the most overprotective dad in the world when he ships his baby son – little, tiny Superman – over to Earth, but Crowe is utterly on form here.

Unpredictable, terrifying, and with that crazy Crowe glint in his eye that lets us know he means business, the actor is phenomenal as a neo-nazi in a blue-collar neighbourhood whose violent beliefs become his own undoing in Geoffrey Wright’s iconic drama.

Tom Hooper’s movie adaptation of the beloved stage musical was one we’d sooner forget. That’s not to say we don’t thoroughly enjoy Crowe as Javert, dealing out some savage authority to Jean Valjean via the medium of song. Because sweet mercy, we do. In fact, we wish Hollywood cast Crowe in more musicals because wowee, it’s something to behold!

We’d expect nothing less than unbridled insanity from RZA’s directorial debut and that’s exactly what The Man with the Iron Fists serves up.

As Jack Knife, Crowe plays a howling brute of a man who considers a bevy of beautiful women “business” and some blood shedding knife play his “pleasure”. The guy is eating the fruit off the wallpaper in just about every scene and acts the rest of the cast (including Lucy Liu, Dave Bautista, and Cung Le) right off the screen.

Is this Crowe’s finest performance? Most definitely not. But is it still one of his best? You bet your sweet ass it is! As SID 6.7, Crowe goes above and beyond the call of his thespian duty to play a VR simulation featuring the personalities of all the world’s worst serial killers throughout history.

Why does a simulation like that even exist? We may never exactly know. What we do know is that Crowe is an unparalleled lunatic in the role who is practically foaming at the mouth as he tries (and succeeds) to out-act Denzel Washington (The Book of Eli). 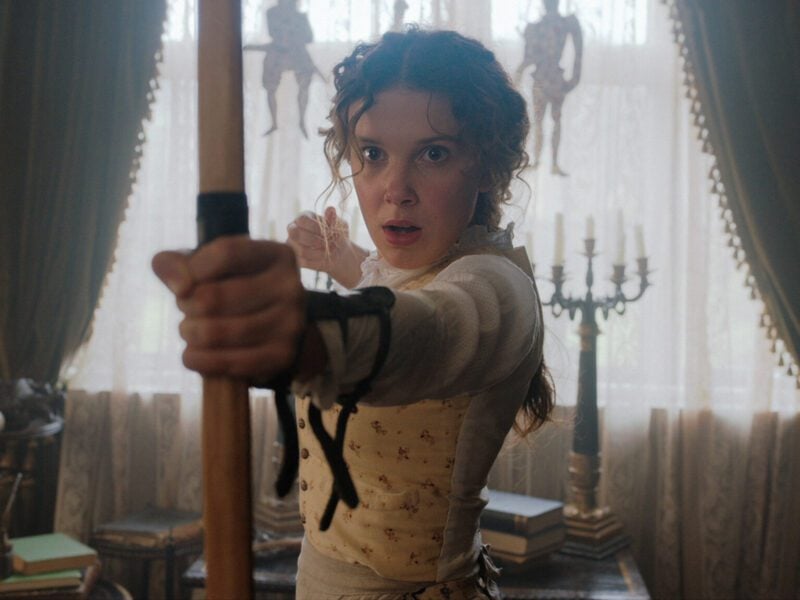 When will ‘Enola Holmes 2’ arrive on Netflix? 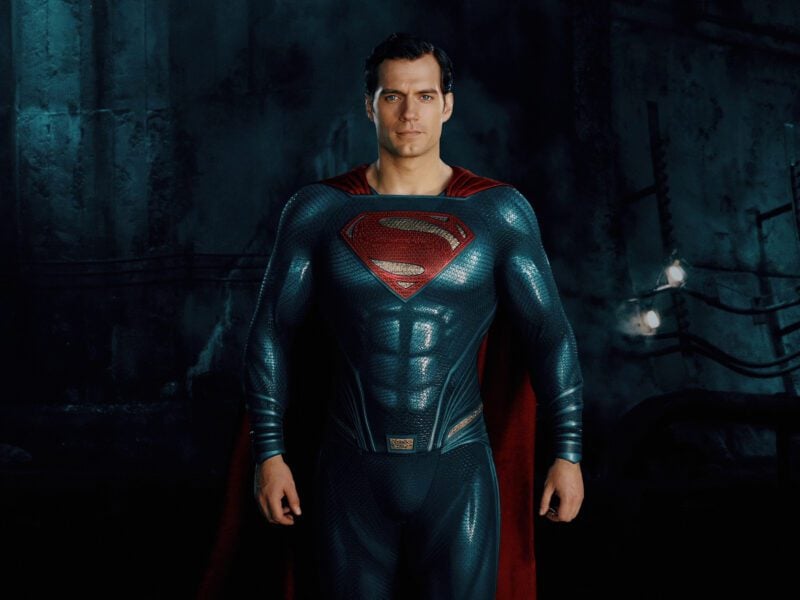