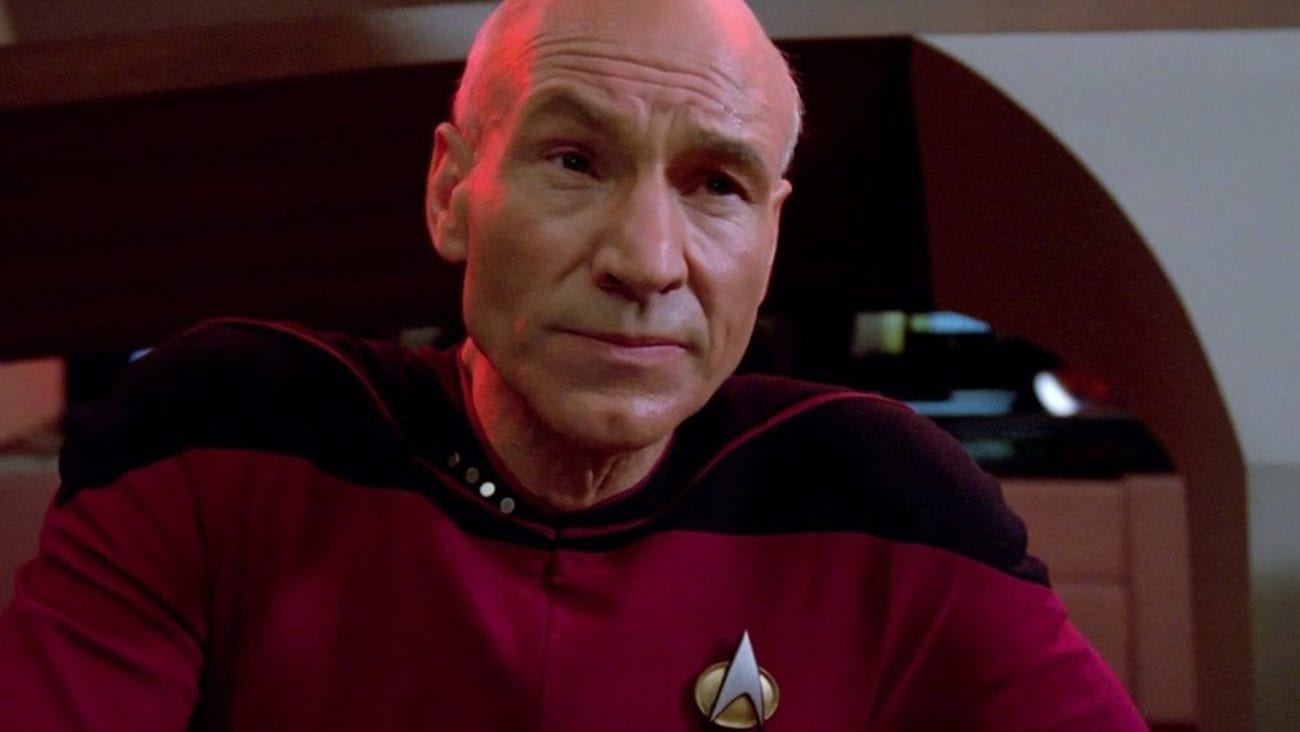 Best start prepping those piping hot cups of Earl Grey now, because the legendary Patrick Stewart will reprise his role as Captain Jean-Luc Picard in Star Trek: Picard, coming on CBS All Access.

The story will pick up in Captain Picard’s life nearly 20 years after the events of Star Trek: The Next Generation and will premiere in 2020. Stewart called the opportunity “an unexpected but delightful surprise” and added he’s “excited and invigorated to be returning to Jean-Luc Picard and to explore new dimensions within him. Seeking out new life for him, when I thought that life was over.”

Star Trek: The Next Generation is available to stream at Amazon. 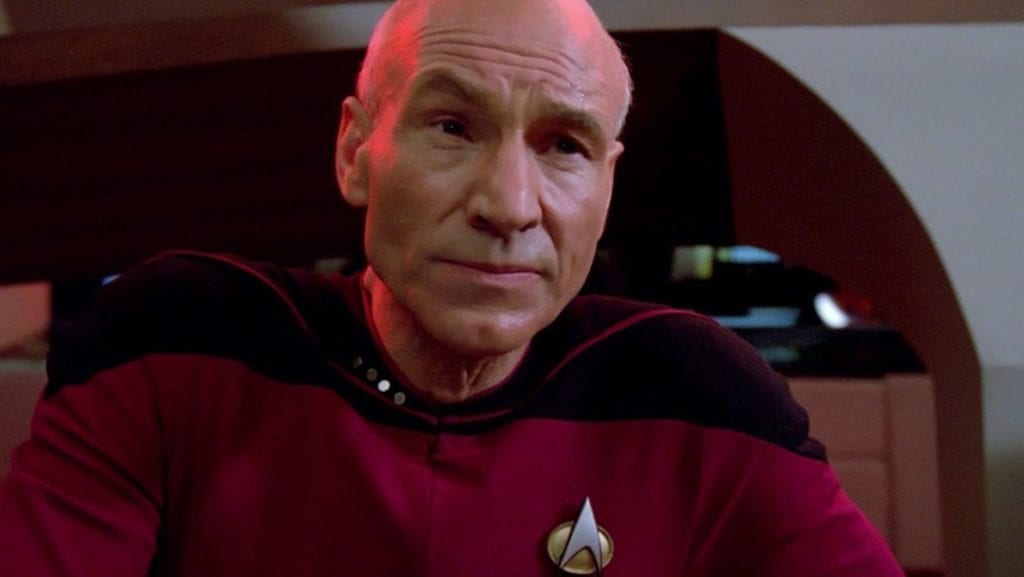 While we couldn’t be more jazzed to see the unparalleled Sir Patrick Stewart once again take on the best intergalactic frontman in Star Trek history (don’t @ us), we’re rather concerned given the continual sloppiness of the current series, Star Trek: Discovery.

Showrunner Hanelle Culpepper is once again taking charge for the Picard reboot, and we’re praying she’s had time to tighten the screws. So far, Discovery’s strained season arcs and dull-as-bricks character dynamics aren’t doing it for us. We know she can do better, and Stewart’s character is one of the most beloved in the sci-fi fandom, so there’s a huge job ahead of her.

In anticipation of Picard’s new adventures in the final frontier, here are nine of his best moments in Star Trek history.

Scotty is struggling with the 24th Century and feels like a relic of the past and Picard is all too happy to console his new friend with the help of a hearty, green alcoholic beverage. The scene shows Picard’s reverence for his elders and the respect he has for the past. Seeing the two of them connect in this way is enough to put a lump in even the hardest of throats.

Since we so often see Picard delivering inspirational speeches and demonstrating his power as an intelligent, balanced leader, it’s sweet to also see him being humble regarding his influence. The Starfleet Captain is suitably embarrassed to be inspecting all the artwork made in tribute to him by the kids of the Enterprise for Captain Picard Day. And Deanna Troi (Marina Sirtis) is even forced to tell him that the children are simply looking up to their captain – something he responds to with a grimace.

When Admiral Margaret Blackwell calls through for a mission briefing, she questions why the hell there’s a Captain Picard Day banner in the background. “It’s for the children!” Picard laughs nervously, “I’m a role model.”

“I’m sure you are,” responds Blackwell, with all the buoyancy of a deflated beach ball. Hilariously, Picard isn’t best pleased.

It’s by no means a major moment in terms of plot or character development, but there’s something so very Picard-esque about the quiet reflective moment at the end of “The Inner Light” that it remains one of our faves.

Commander Riker (Jonathan Frakes) pops by Picard’s living quarters and quietly hands him a Ressikan flute. Picard silently removes it from the box and proceeds to play it, showcasing his thoughtful emotionality.

6. Picard gets emotional about what The Borg did to him: “Family”

It’s always refreshing to see any leader given the opportunity to be vulnerable, and in “Family”, Picard finally breaks down and opens up about his experiences at the hands of The Borg in “The Best of Both Worlds”.

“I wasn’t strong enough,” he sobs to his brother, “I should have been able to stop them.” While Picard grieves over his perceived weakness and struggles to recover from his trauma, his brother delivers a warm reminder that Picard “is a human being after all.”

“This is going to be with you for a long time,” his brother tells him, relieved that Picard is letting go and opening up, “You have to learn to deal with it.”

If you didn’t get even a little cut up over the emotional ending of this episode, you’re clearly dead inside. Spock complains that his recently deceased father never really cared for him and didn’t even do a mind meld with him while he was alive.

However, Picard had done one with Spock’s dad and offers the iconic character an opportunity to see how much his father actually cared for him by melding with Picard’s mind. The warm smile that envelopes Picard’s face as Spock experiences his father’s love for him (possibly for the first time) is truly a joy to behold.

4. Picard refuses to give in to torture: “Chain of Command”

Madred (David Warner) thinks he’s Billy big balls by torturing Picard with the most frustrating (and frankly, childish) technique possible, by blinking four lights at the Captain and insisting there are actually five.

Picard refuses to yield to his stupidity and continues to correctly ascertain that there are four lights. Even though that answer results in him being electrocuted. The point is: Picard is a total boss whose resolve cannot be so easily broken.

3. Picard fights for the civil liberties of his crew: “The Drumhead”

Picard’s impassioned stance against Starfleet Admiral Norah Satie’s conspiratorial hunt for a saboteur sees him delivering a powerful speech regarding the dangers of diminishing people’s freedom.

Cleverly, he uses the words of Satie’s own father against her, quoting words he’s known since he “was a schoolboy: With the first link, the chain is forged. The first speech is censured, the first thought forbidden, the first freedom denied, chains us all irrevocably.”

The Captain signs off his point by stating that “we’re all damaged” whenever “any man’s freedom is trodden on,” and subsequently, Admiral Satie is forced back into retirement to take a long hard think about just how wrong she was.

2. Picard argues the case for Data’s autonomy as a sentient being: “Measure of a Man”

The Federation is determined to dismantle Data so they can “learn” from him and build more androids to carry out all the dangerous grunt work that non-android life forms are too damn special to do. Naturally, Picard is having none of it. He doesn’t just argue that androids like Data show signs of consciousness and so shouldn’t be treated as property.

He also suggests that to create thousands more like Data and treat them similarly would set a dangerous precedent for how entire races of life can be treated.

Lily Sloane (Alfre Woodard) isn’t here for any of Picard’s bullshit when she starts worrying that he’s prioritizing vengeance against The Borg over the safety of his own crew. His speech outlining why he’s taking the stance he is and why “The line must be drawn here!” in leading the fight against The Borg is understandable – particularly regarding his own traumatic experiences.

But as his emotions spiral and his composure shatters, he realizes Sloane is right and he’s allowing for gigantic decisions to be dictated by his own ego and emotions.