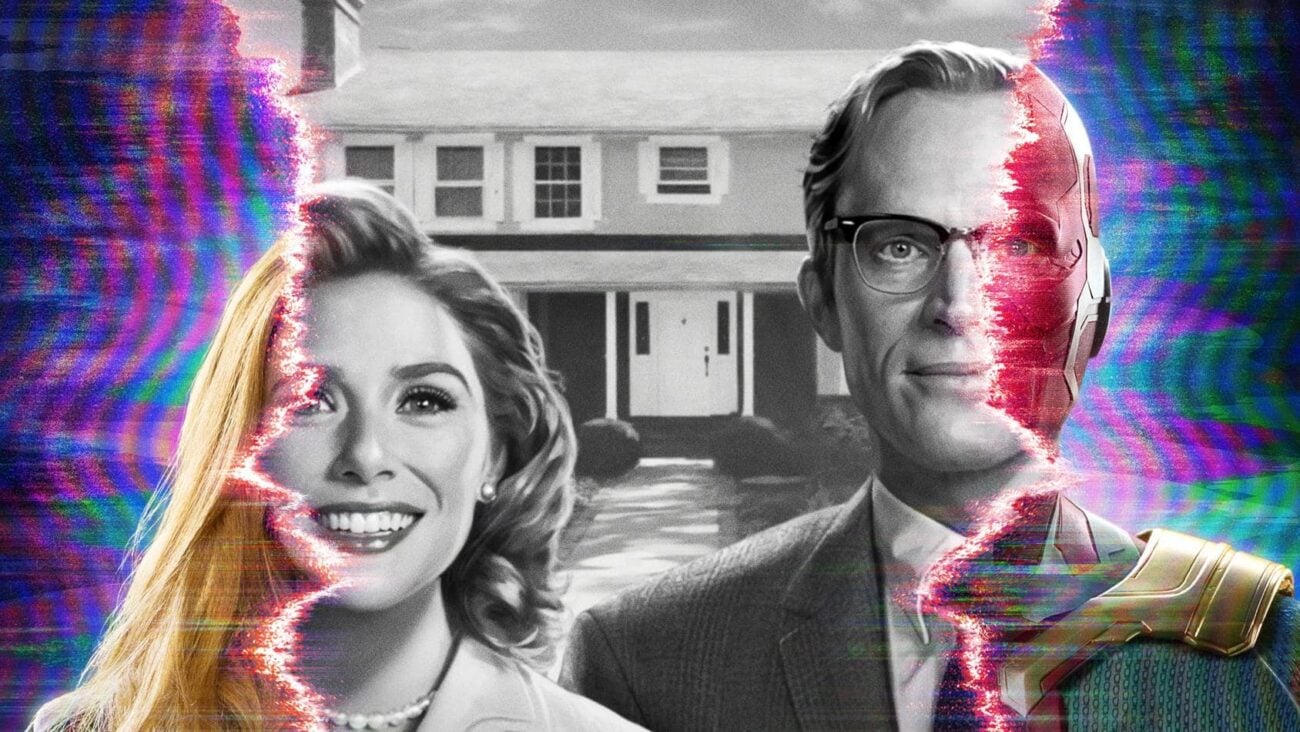 Marvel’s ‘Wandavision’: Is it really worth watching – or can you skip?

Can you believe it’s been a year & a half since we’ve been treated to a new Marvel Cinematic Universe entry? Phase 3 of the MCU ended with Spider-Man’s secret identity exposed to the world and the revelation that Nick Fury has been traveling around the galaxy in a Skrull ship. Lots of teases about Phase 4 have peppered our lives since then, and the main takeaway from all of them is this: Phase 4 will be . . . weird.

The new MCU TV show Wandavision debuts this week, and it gets the ball rolling on Phase 4. The show features the return of the Scarlet Witch (Wanda) and her previously deceased android lover (Vision) in what seems to be a series of homages to sitcoms of old. Did we mention Phase 4 looks like it’ll be really weird?

Is Wandavision worth your time? We have new info from a press conference featuring the cast & crew of the show, as well as early opinions from those lucky few who were able to watch the first three episodes already. Read on to decide if you should skip ahead to The Falcon and The Winter Soldier! 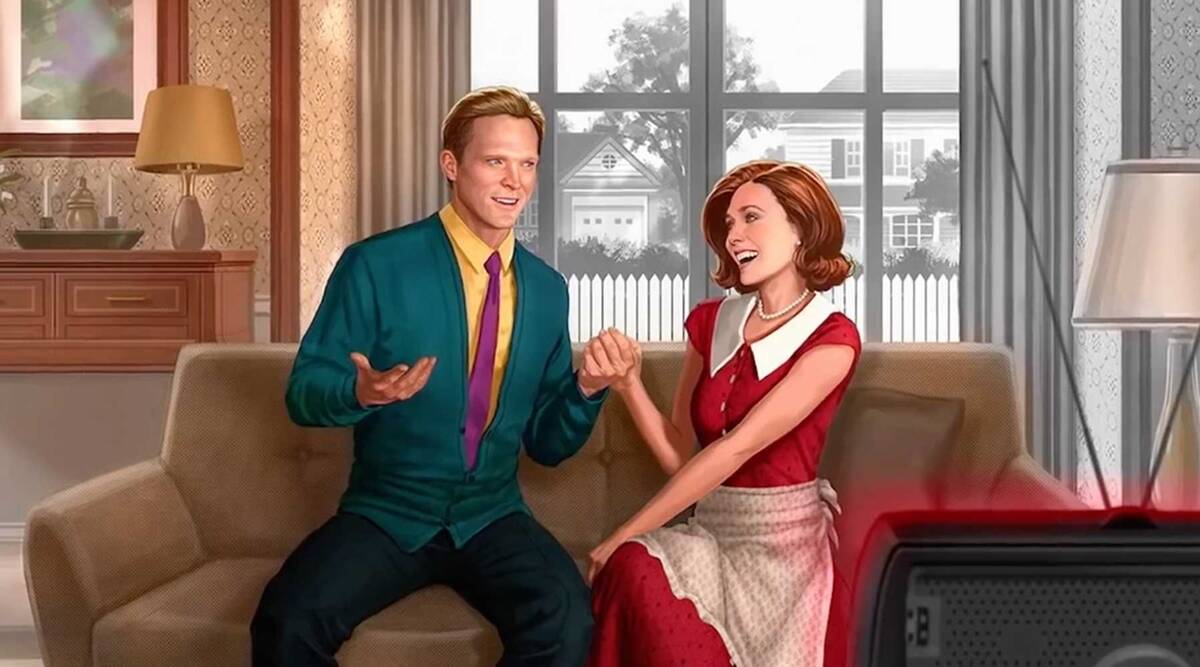 Wandavision seems to be a mystery inside a riddle wrapped in an enigma. How is Vision alive again after Thanos ripped the Soul Stone off his forehead? Why are Wanda & Vision living through MCU versions of classic family sitcoms? Is this official MCU continuity or a parallel universe lark like the upcoming What if . . . ? animated show?

Rest assured, Wandavision is a hundred percent in the official MCU continuity and there is an explanation behind everything – although it won’t be spelled out right away. Astute MCU viewers should be able to pick up hints about HYDRA’s connection to what’s really going on. These sinister nuggets of information will be embedded in the show’s “commercial breaks” – so make sure you pause before going to the bathroom!

Another interesting connection to the MCU is the presence of Monica Rambeau (played by Teyonah Parris) on the show. You know, “Lieutenant Trouble” from the Captain Marvel movie. Monica was a 90s kid last time we saw her, so Wandavision will fill us in on what has happened to her during her journey to adulthood. Has she even seen Carol Danvers since they parted ways at the end of Captain Marvel? 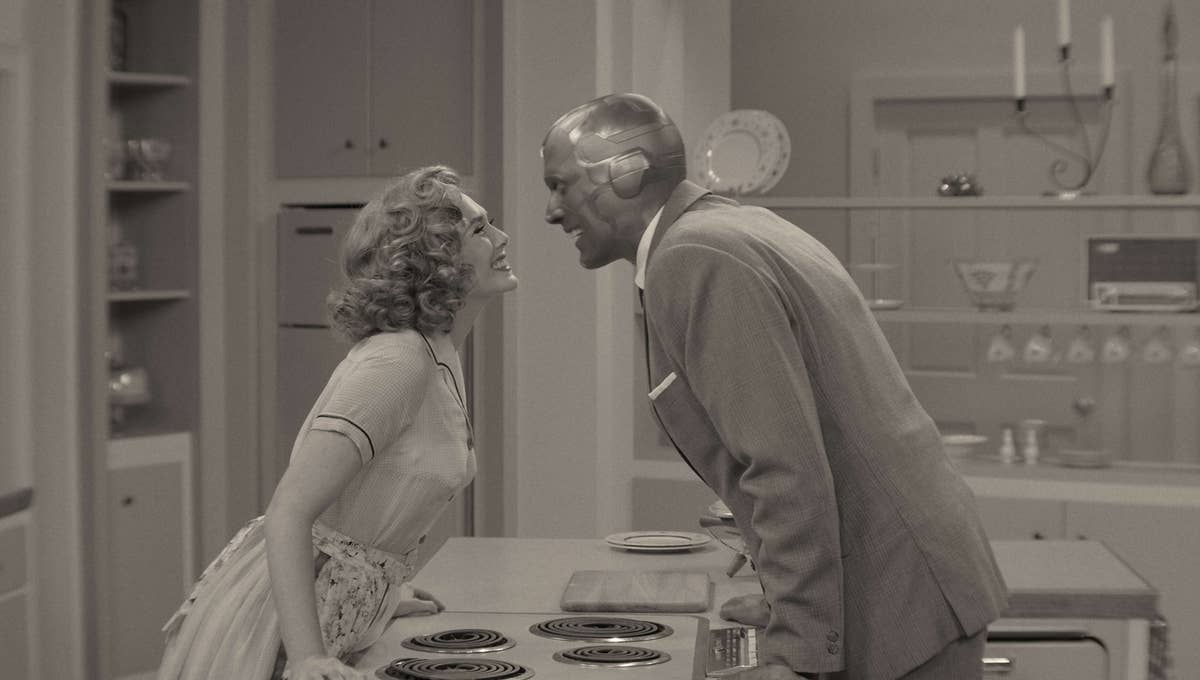 The choice of the family sitcom aesthetic is certainly the most eye-catching aspect of Wandavision right now – especially since we’ll see that aesthetic evolve throughout the decades. The show’s creators committed to the gimmick to the point of taping each episode in front of a live audience, which was a brand new experience for some of the actors. Elizabeth Olsen admitted she found it “nerve-wracking.”

Still, the cast & crew worked tirelessly to immerse themselves in the world of old family sitcoms. Director Matt Shakman & President of Marvel Studios Kevin Feige consulted with sitcom legend Dick Van Dyke. And everybody did their homework by watching as many sitcoms from all decades as they could. Now that’s the kind of research we can get on board with!

In the end, the showrunners decided to focus exclusively on family sitcoms because – as cheesy as they may sometimes seem to modern eyes – they are the ones whose core values have aged the best. Wandavision steers clear from recreating “disappointing tropes” and instead looks to celebrate sitcom elements that were “timely and timeless.” All while adding a foreboding tone underneath it all because, well, HYDRA. 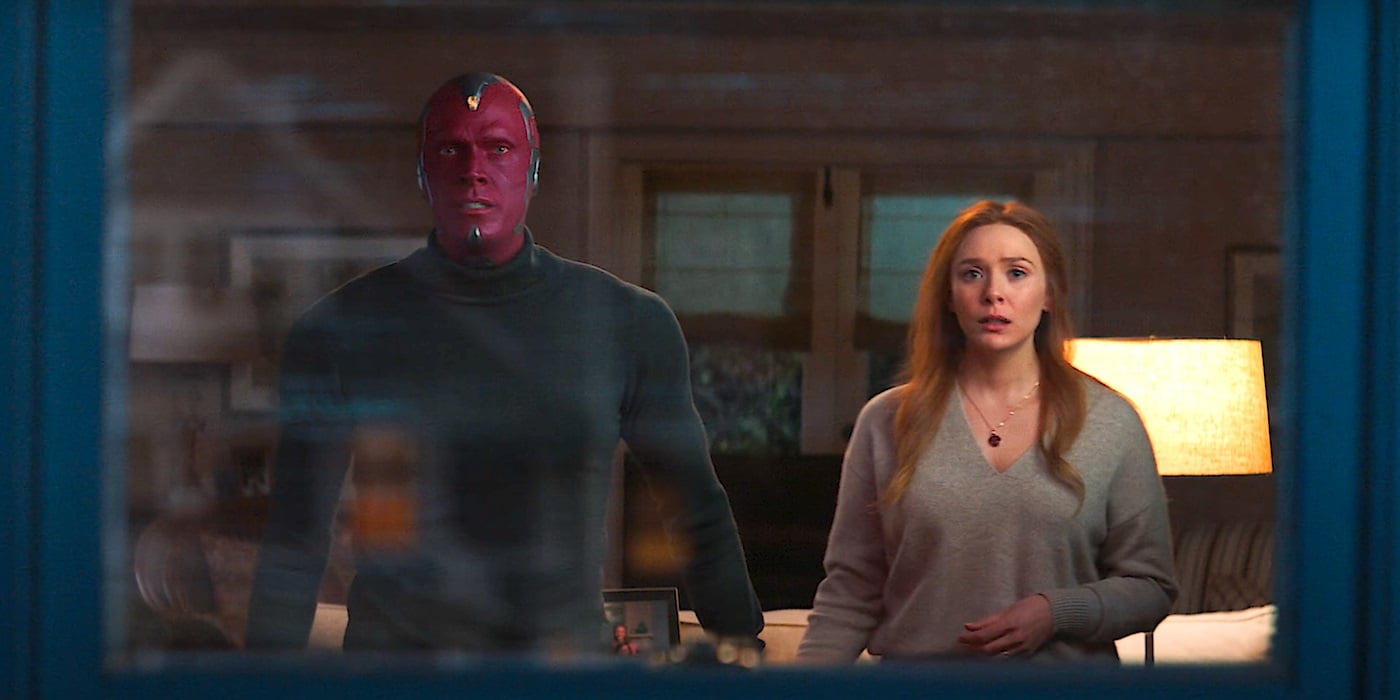 Early reactions to the first three episodes of Wandavision have been mostly positive, signaling that Phase 4 of the MCU might be off to a strong start. Praise for the strong performances from the cast shouldn’t be a surprise, but people also seem to really enjoy the quirky, unexpected nature of the show. And they love that Wandavision episodes are only thirty minutes long.

The greatest incentive to watch Wandavision, however, is finally being able to delve into the Wanda & Vision relationship. The couple developed mostly off-screen during previous MCU entries, so viewers are delighted to see their romance fully fleshed out – even though it’s in this strange sitcom world.

Not everybody is crazy about Wandavision though. Some people didn’t have the patience for the slow-burn mystery at the center of the show. Keeping your audience in the dark about what’s really going on can be a turn-off, but it seems Feige & his team are willing to take that chance.

Even if you felt burned out on MCU content after Avengers: Endgame, odds are you’ll check out Wandavision just to see if it’s the good kind of weird or the terrible kind of weird. Opening Phase 4 with a big question mark is a risky move so here’s hoping it pays off. Let us know what you think in the comments!