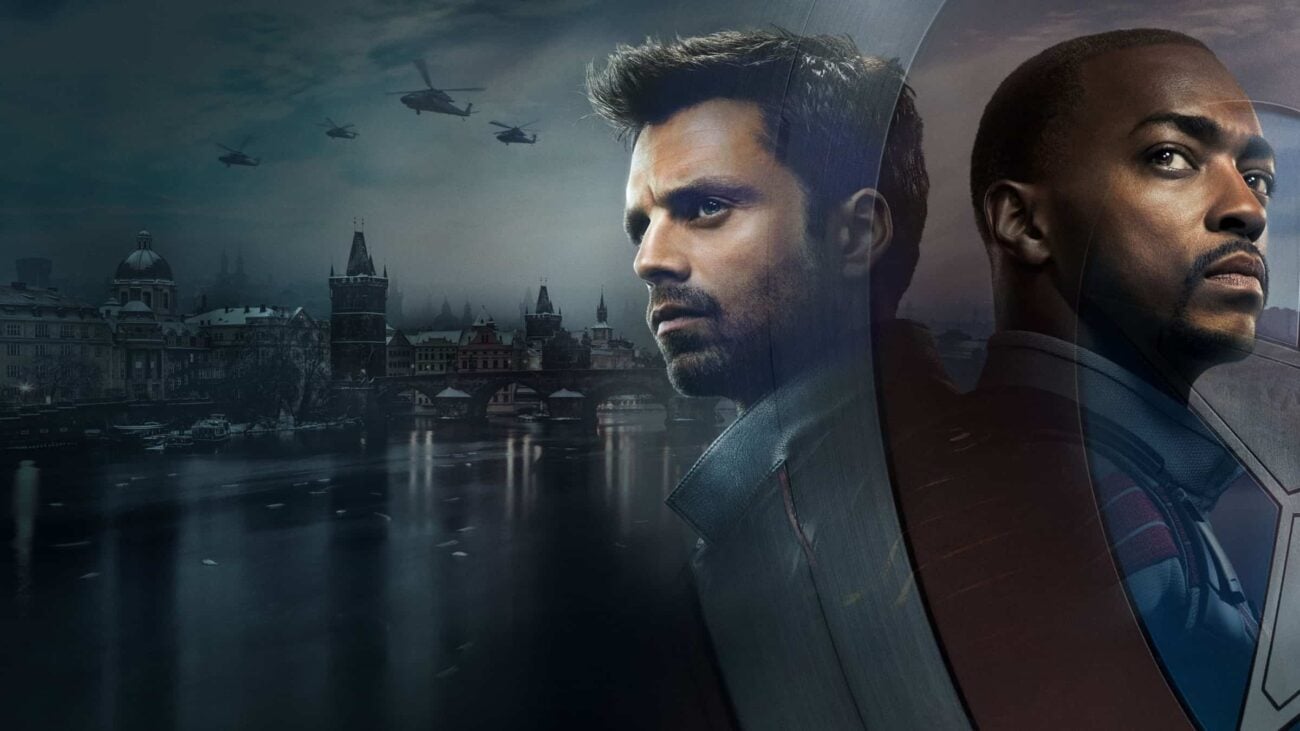 The Falcon and the Winter Soldier should be ready for you to watch on Disney+, riiiiiiiiiiight around the time you finish watching Zack Snyder’s Justice League. You might even have time to take a shower and grab a snack if you started Snyder’s movie in the wee hours of the morning.

Showered or not, we hope you’ve been doing some prep work before diving into The Falcon and the Winter Soldier. Much like WandaVision did, the new MCU series promises to pick up several threads from previous Marvel movies. So it wouldn’t be a bad idea to refresh your memory and rewatch these films.

You might even be watching them for the first time, if for some reason you’ve been able to resist the Marvel Cinematic Universe’s charm until now. 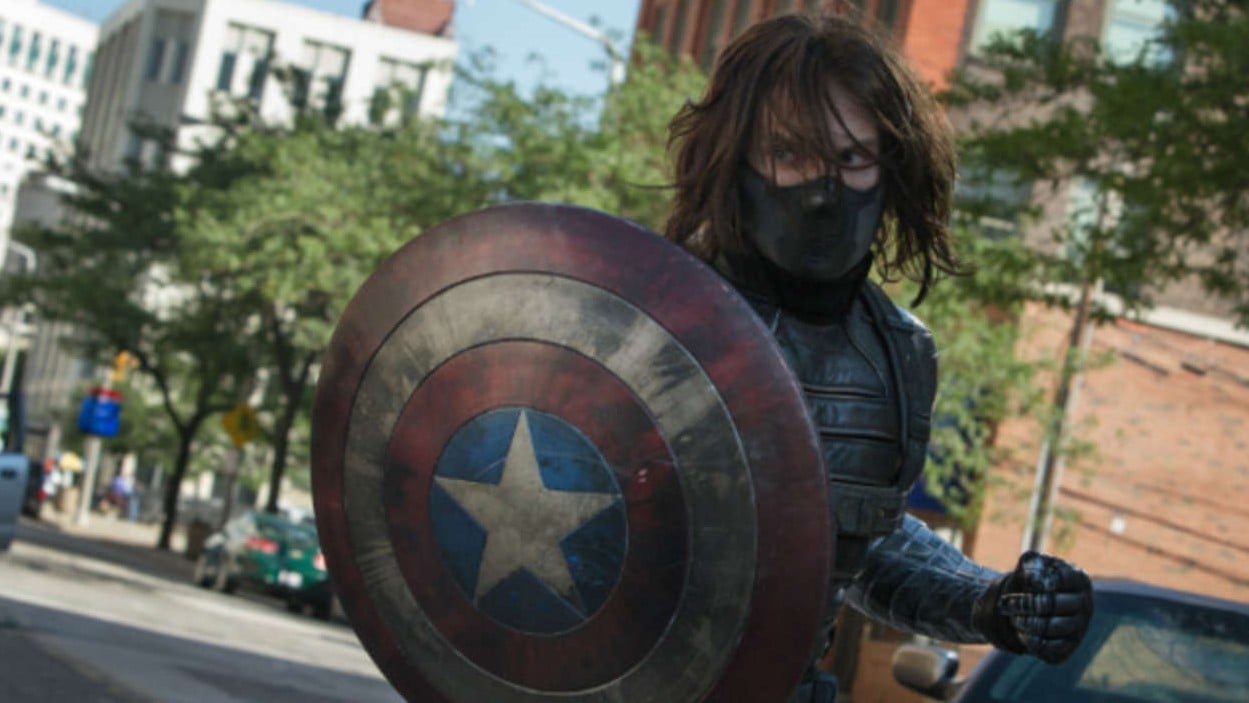 What better place to start warming up for The Falcon and the Winter Soldier than the movie that introduced us to both characters? Unless you have the time & energy for a full start-from-scratch MCU rewatch, of course. But if you’re an adult with a full-time job, odds are you’ll have to settle for starting your journey with the second Captain America movie.

By 2014, when Captain America: The Winter Soldier was released, Phase Two of the Marvel Cinematic Universe was in full swing. The movie showed unexpected corruption at the core of the MCU, as Steve Rogers & the Black Widow uncovered a sinister HYDRA conspiracy within SHIELD. Cap & the Widow enlisted the help of Sam Wilson – who adopted the superhero identity of the Falcon – to battle HYDRA.

The film then gave us an even bigger reveal as it brought Steve’s best friend Bucky Barnes (presumed dead after Captain America: The First Avenger) back as the Winter Soldier – a brainwashed assassin who initially wouldn’t recognize Steve. Winter Soldier also introduced the MCU to the directing powers of the Russo brothers, who would go on to direct the biggest Marvel movies over the next few years. 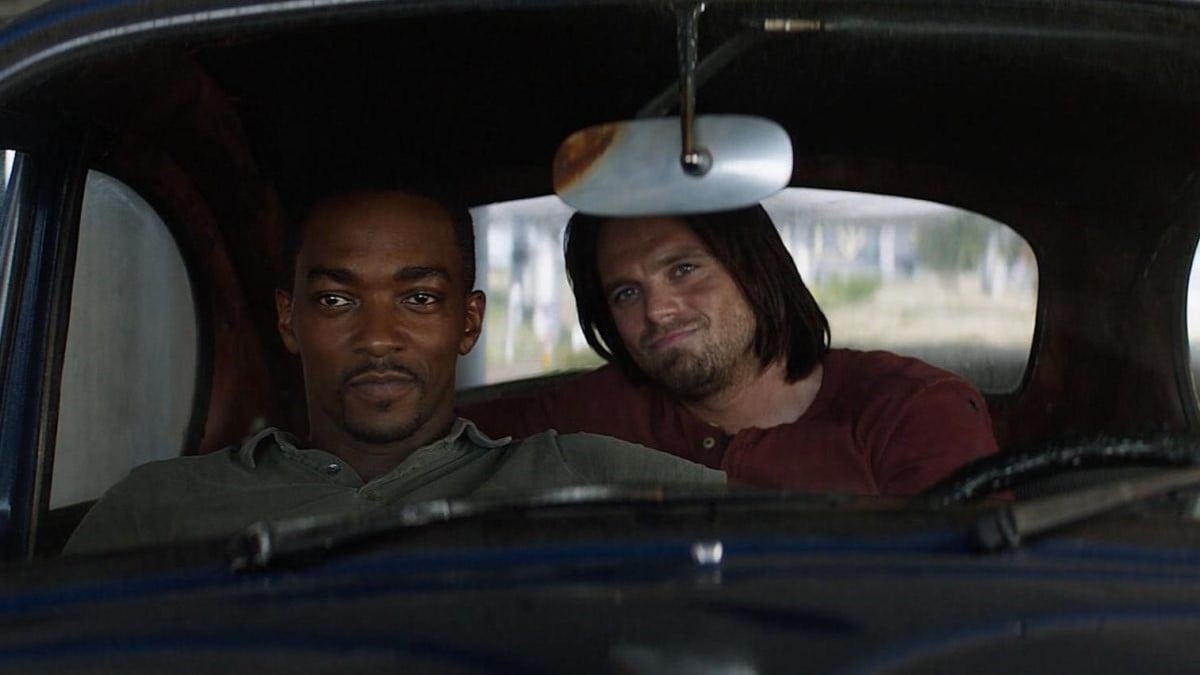 Civil War is when we really got to see Sam & Bucky interact in ways that will probably be further explored in The Falcon and the Winter Soldier. The movie revolves around the conflict created when Captain America (and by extension, the Falcon) decides to protect the Winter Soldier from prosecution for his alleged crimes. There’s also all the stuff about the Sokovia Accords, but we’ll leave that for some other time.

This all leads to Cap, Sam, and Bucky going on the run from The Avengers, collecting few precious allies along the way. It also leads to Sam & Bucky low-key competing for Steve Rogers’s affection. Basically, Bucky was replaced as Steve’s best friend by Sam, but what happens now that he’s back? And if you want to complicate matters more, Iron Man seems pretty peeved that Cap is giving so much attention to those two.

Things got pretty ugly by the end of Civil War, as it was revealed that Bucky was responsible for the deaths of Tony Stark’s parents – an act committed during one of his Winter Soldier trances. The ensuing conflict among The Avengers, turned out to be a meticulous revenge plan from Helmut Zemo, a man who hates the super-team . . . and who seems to be returning in The Falcon and the Winter Soldier. 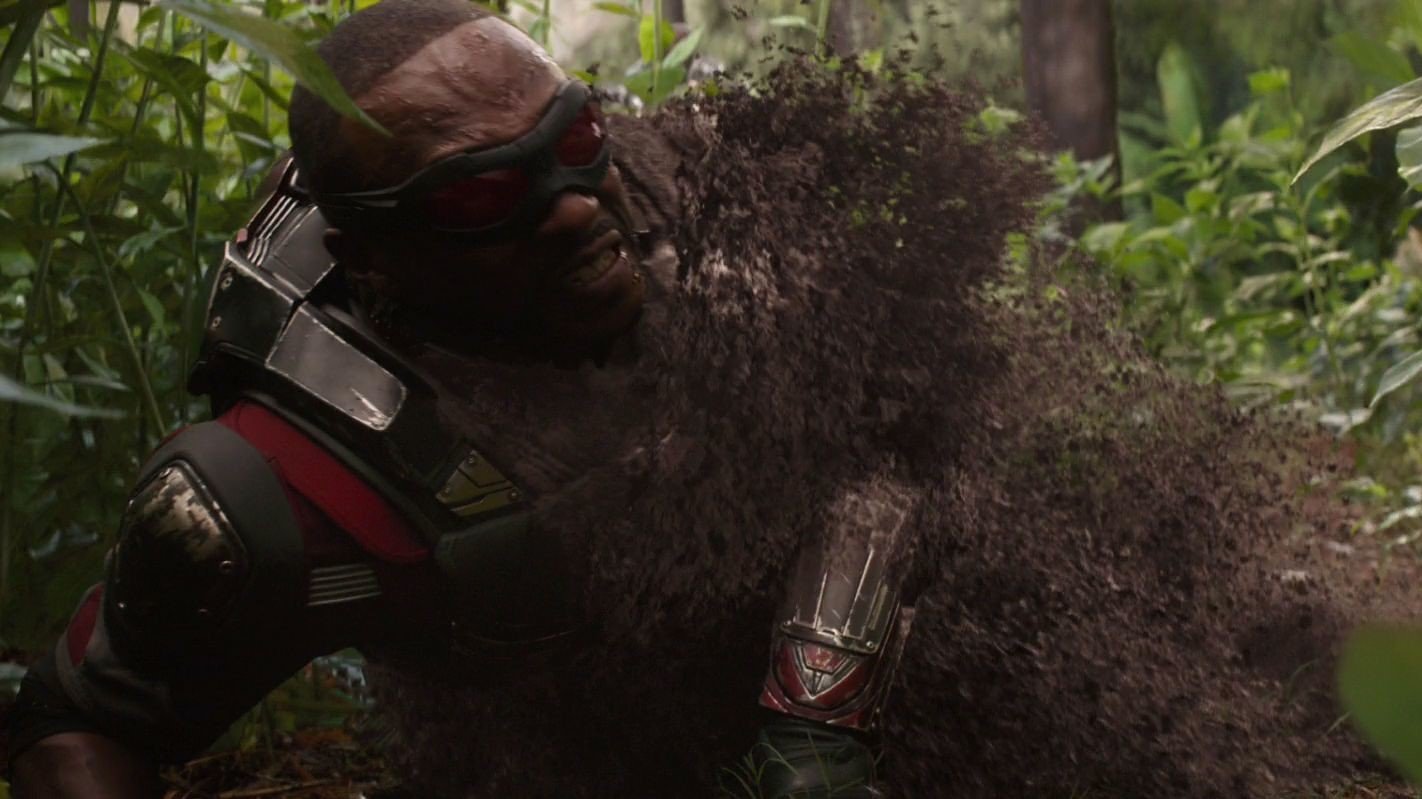 Civil War ends with Bucky going into hibernation in Wakanda – a favor from Black Panther to Cap, both heroes hoping Wakandan technology might hold the key to permanently cure the Winter Soldier from his HYDRA programming. That means Bucky sits out most of Infinity War. Sam, on the other hand, remains part of Cap’s underground team – a team that’s still on the run from law enforcement.

Then Thanos happens. The cosmic threat the mad titan poses to planet Earth & the universe is more than enough for the Avengers & Cap’s team to join forces. It’s also enough for Black Panther to deem Bucky ready to join the good fight once again. Sam, Bucky, and Cap barely get to enjoy any time together though, as Thanos’s infamous “Infinity Snap” tears the trio apart again.

That’s right. Infinity War ends with a whole bunch of heroes turning into dust. Cap manages to avoid being part of the 50% of life in the universe that disappears, but the Falcon and the Winter Soldier aren’t so lucky. 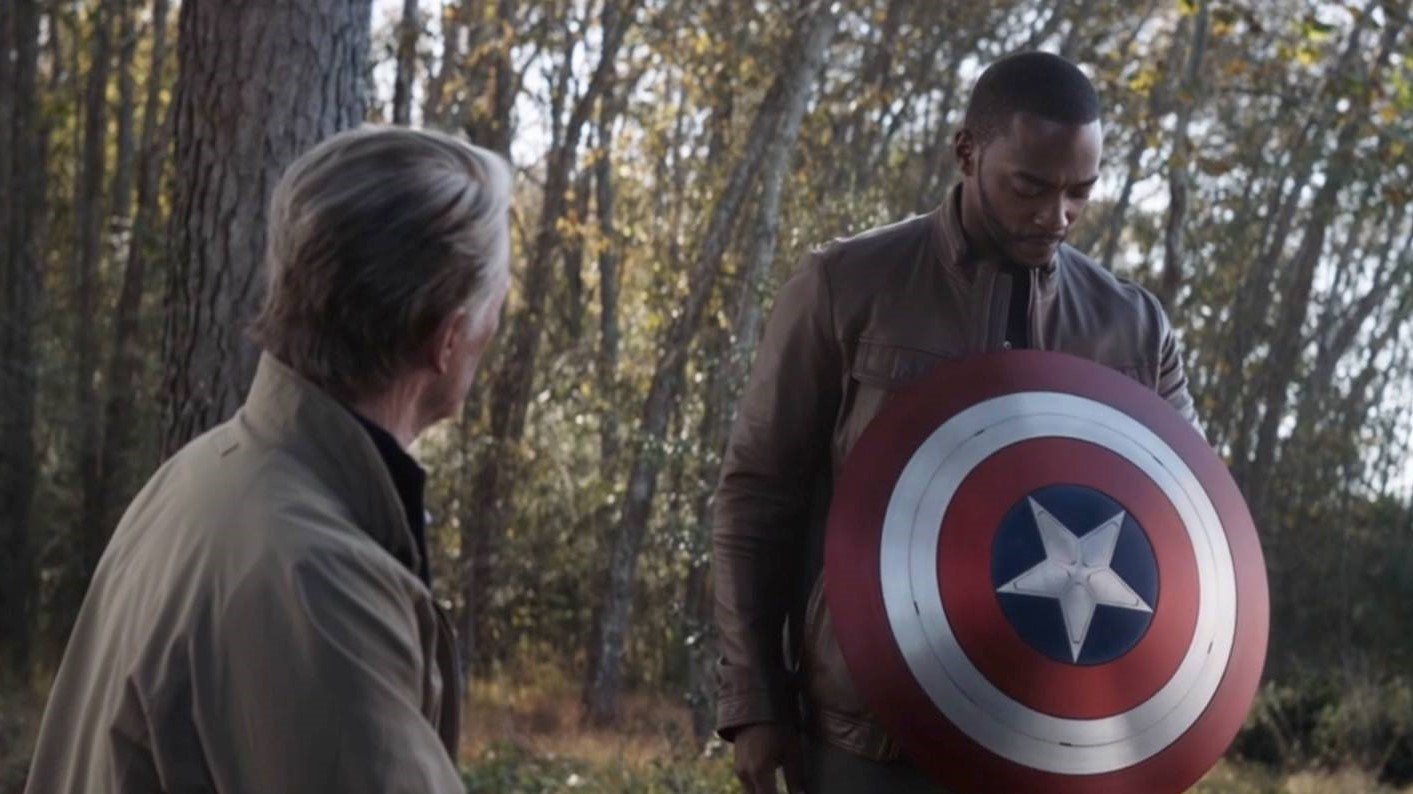 Since the Falcon and the Winter Soldier were part of the “Snap casualties”, they’re absent from most of Endgame – a movie about how the remaining Avengers go about bringing everyone who disappeared back. There’s a lot of time-travel involved, and lots of callbacks to previous MCU movies. If you’re an MCU fan, it’s a hoot.

Eventually, the team finds a way to undo Thanos’s Snap, just in time for a massive climactic battle against the villain’s forces. The Falcon and the Winter Soldier join the fray in the nick of time and fight alongside pretty much every Marvel hero we’ve met so far. After the Avengers win, the two friends see Captain America off, as he embarks on a solo time-travelling mission to fix alternate timelines.

The big moment at the end of Avengers: Endgame features Cap coming back to the present as an old man, having spent most of his life with his beloved Peggy Carter in the past. Steve gives Sam his shield, officially passing the Captain America mantle to him, as Bucky watches in apparent approval. So shouldn’t the show be called The New Captain America and the Winter Soldier? We should find out what’s going on soon.