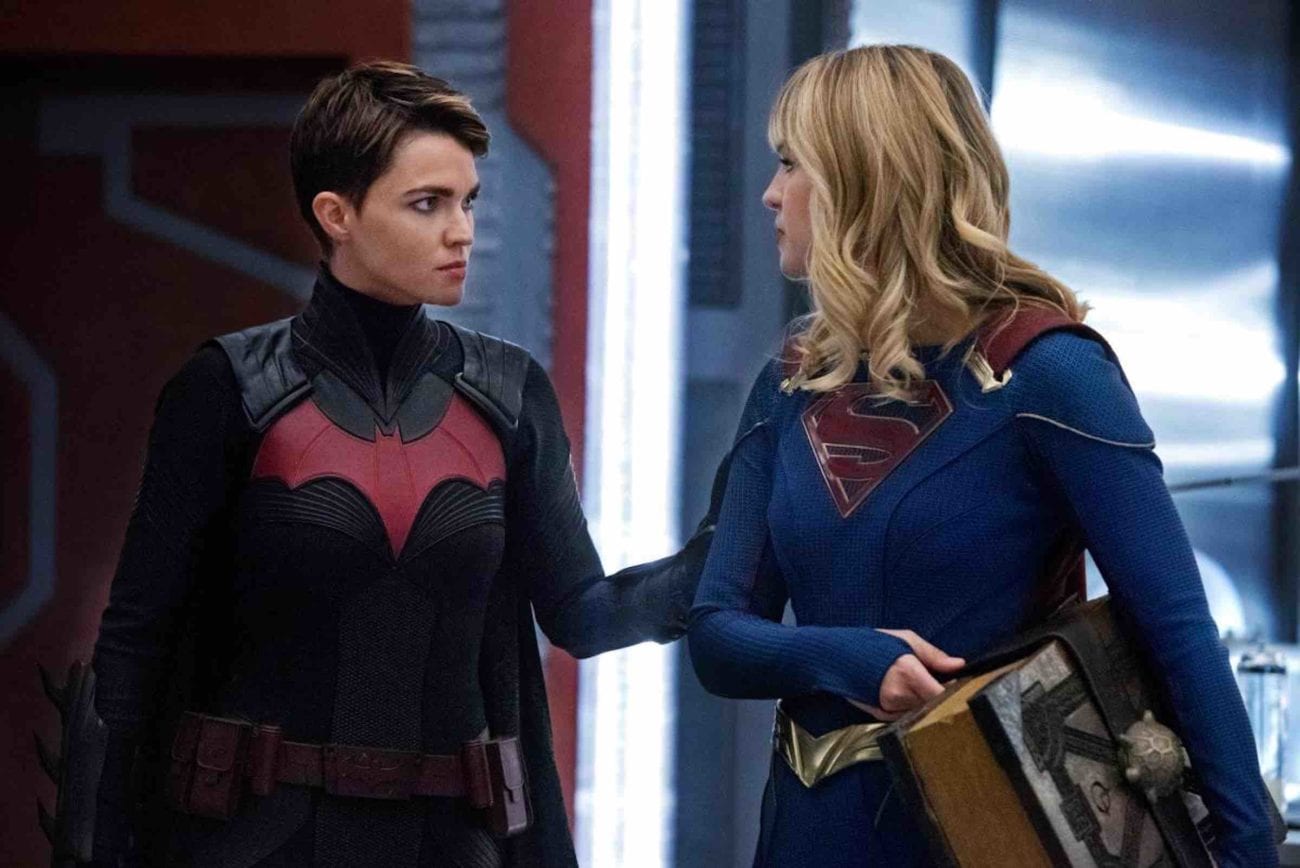 After ‘Crisis’: Here’s why we want a ‘Supergirl’ – ‘Batwoman’ crossover

Crisis on Infinite Earths is well underway. The CW’s most ambitious Arrowverse crossover yet has released two stellar and action-packed episodes. During Crisis On Infinite Earths, fans have been promised stellar team-ups and unexpected pairings as the course of the Arrowverse is about to be rocked.

Before we get too deep into things, we need to administer a spoiler warning for “Part One” and “Part Two” for Crisis On Infinite Earths.

One of the team-ups fans have been dying to see since 2018’s Elseworlds crossover is between Kate Kane/Batwoman (Ruby Rose) and Kara Danvers/Supergirl (Melissa Benoist). This is because, in comics, Batman and Superman, the more famous cousins, are best friends and turn to each other in times of great need. In Elseworlds, Kara confirmed to Kate that this is the case on Earth-38, mentioning that Clark (Tyler Hoechlin) and Bruce are friends. 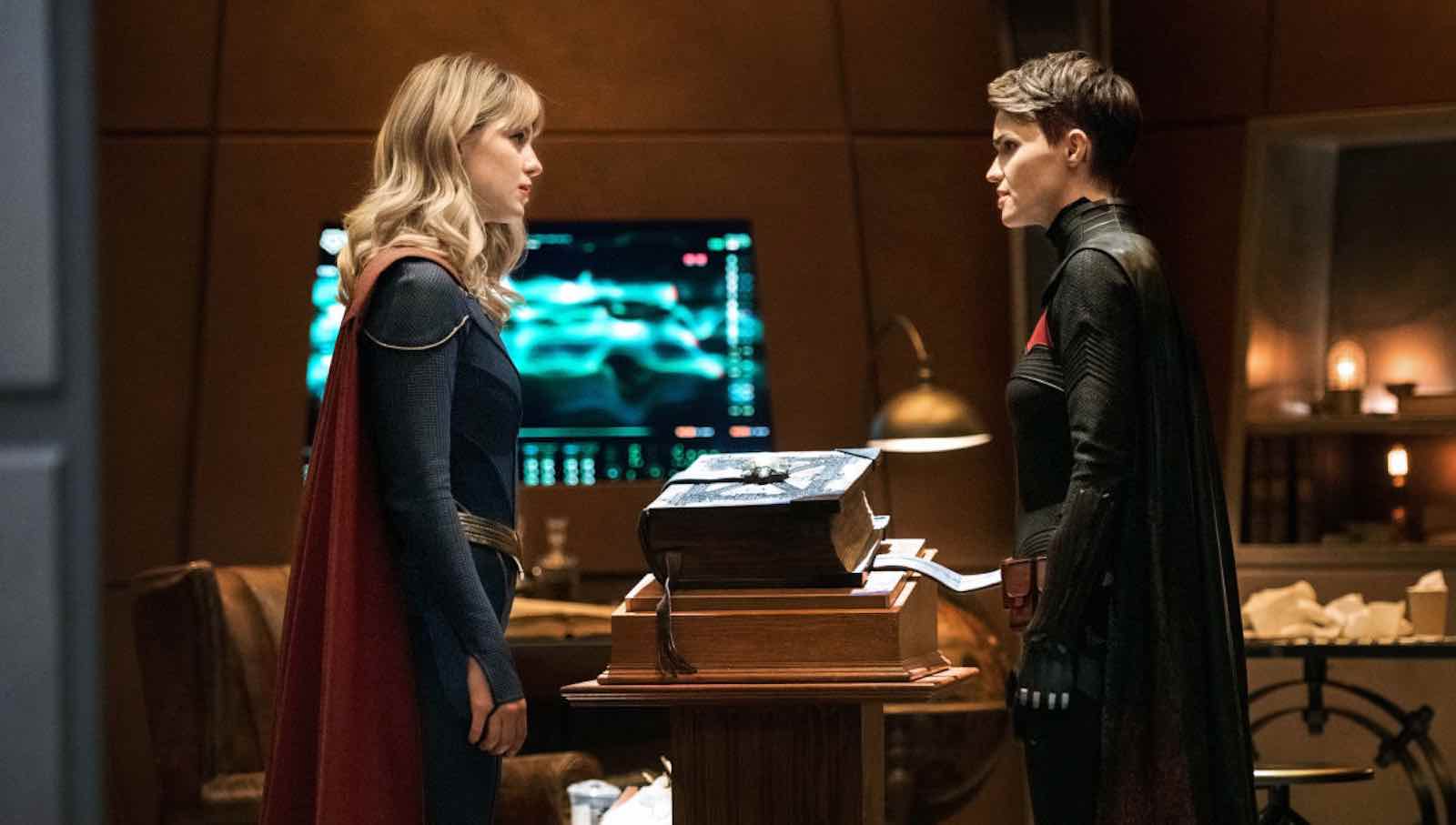 Between the brief team-up we saw in Elseworlds plus Crisis on Infinite Earths, we’re demanding a Supergirl and Batwoman solo crossover. We don’t care how it happens, but it needs to happen.

Here are the reasons why the Arrowverse needs to let the Worlds’ Finest have a solo team-up. 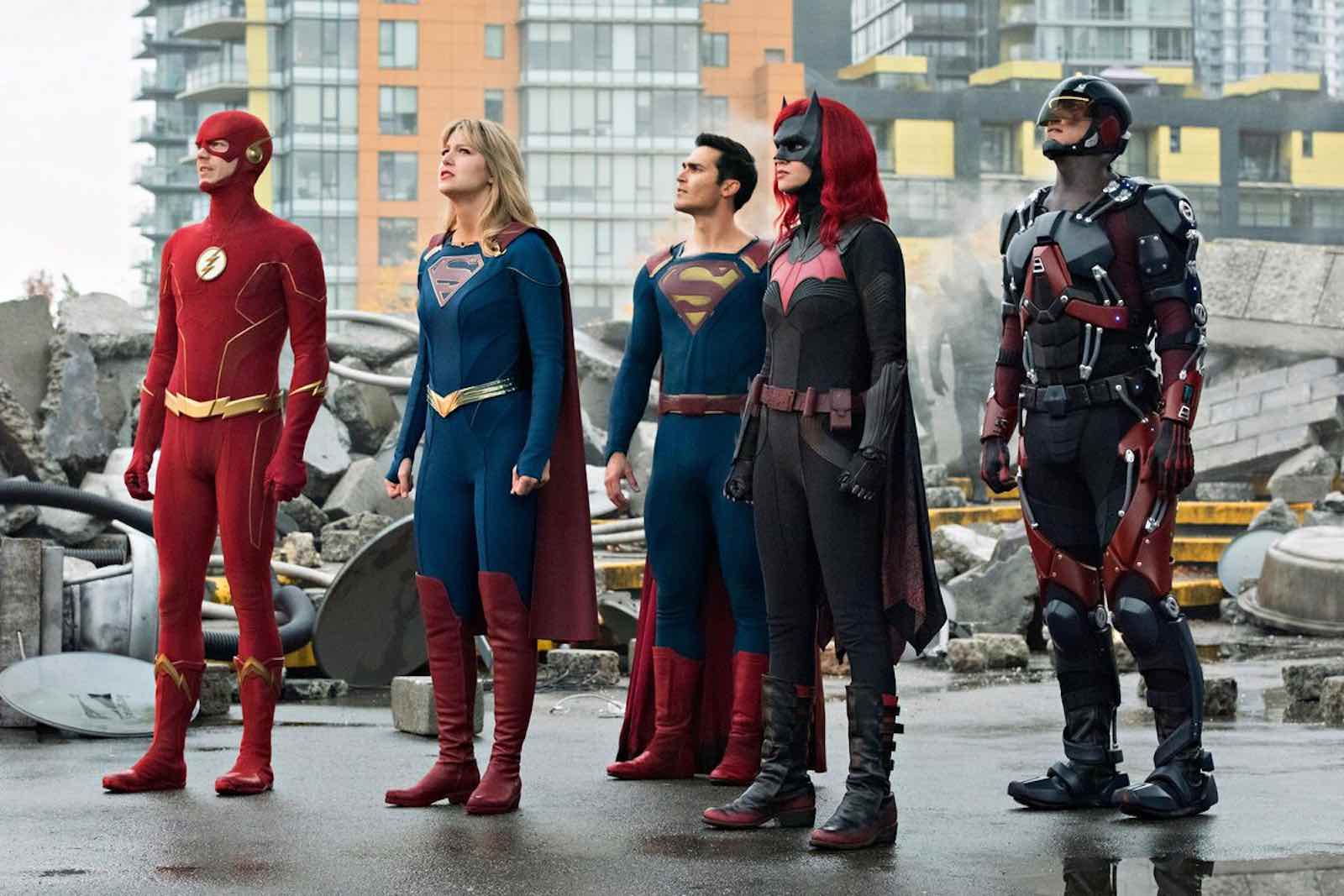 Not a lot of overlap with the Arrowverse at large

Supergirl gets the fuzzy end of the lollipop in terms of crossovers. Part of the reason is that the series takes place on another Earth so it doesn’t make sense to have a lot of back and forth with Earth-1. Even so, Supergirl is part of the Arrowverse at large.

The Arrowverse has, at least, figured out how to do brief cameos. A video message from a Team Arrow member on Legends, Barry (Grant Gustin) helping Oliver (Stephen Amell) out of a tight spot on Arrow, these little bits and pieces help flesh out the Arrowverse at large and make things feel connected on some level.

As Batwoman is the new kid on the block, so to speak, there hasn’t been a need for these incidents of crossover appeal. Kate doesn’t know Barry and Oliver. After the Arkham escape in Elseworlds, she probably doesn’t trust them too much. Who does Kate trust? Kara. 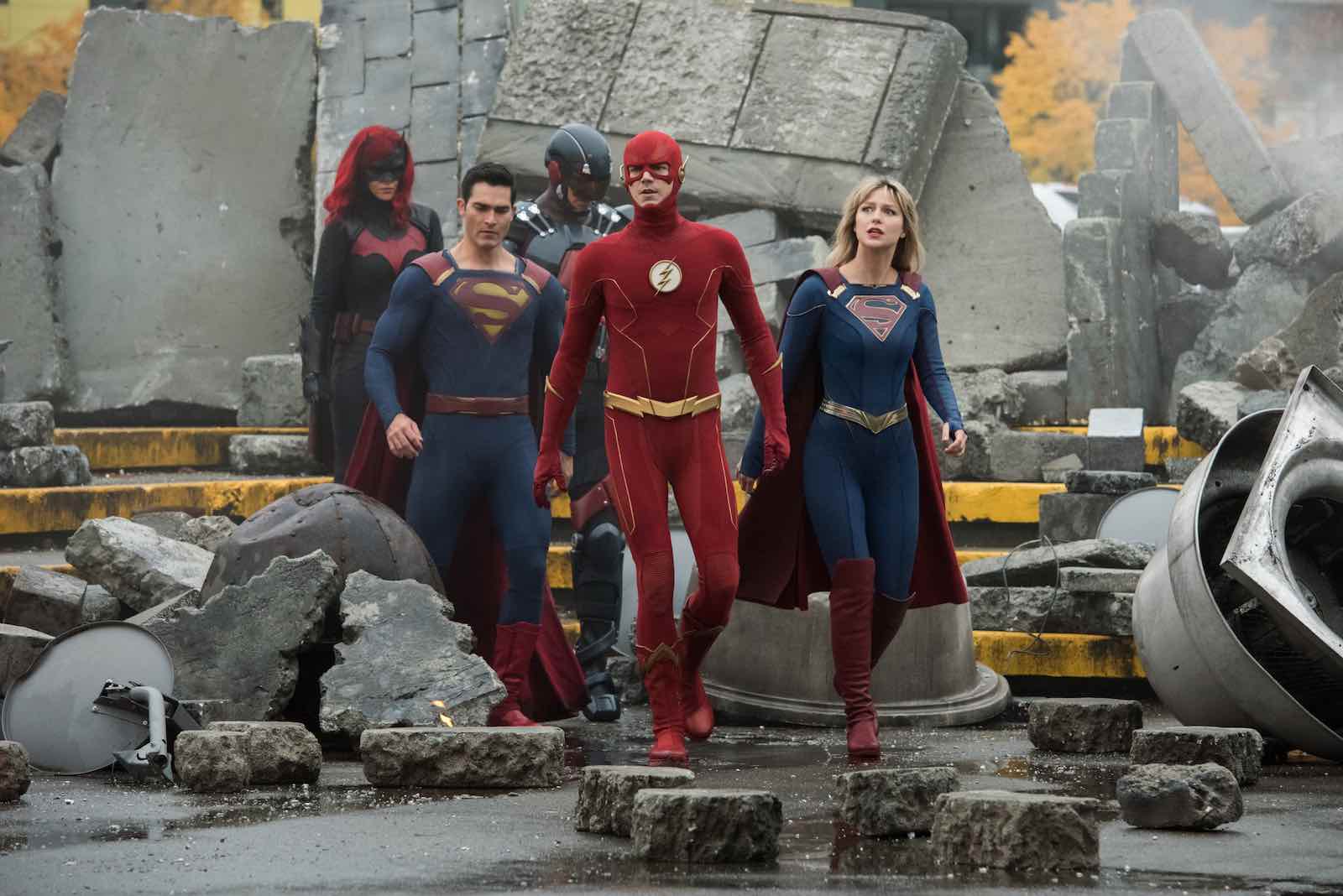 It would be cool to see these little incidents between Batwoman and Supergirl. We don’t know what the multiverse will look like following Crisis On Infinite Earths, but if there is a way that Kara and Kate and their crews can cameo on each series? That would be cool. Luke Fox (Camrus Johnson) gets a tech assist from Brainy (Jesse Rath). Nia (Nicole Maines) taps into her powers to help Kate out. Alex (Chyler Leigh) sends supplies to Mary’s (Nicole Kang) clinic.

Nothing needs to be too over the top here, but these little incidents could help tie the two together and leave them feeling less like the lone wolves. It makes sense to tie Batwoman and Supergirl together. Supers and Bats just go together like peanut butter and jelly. 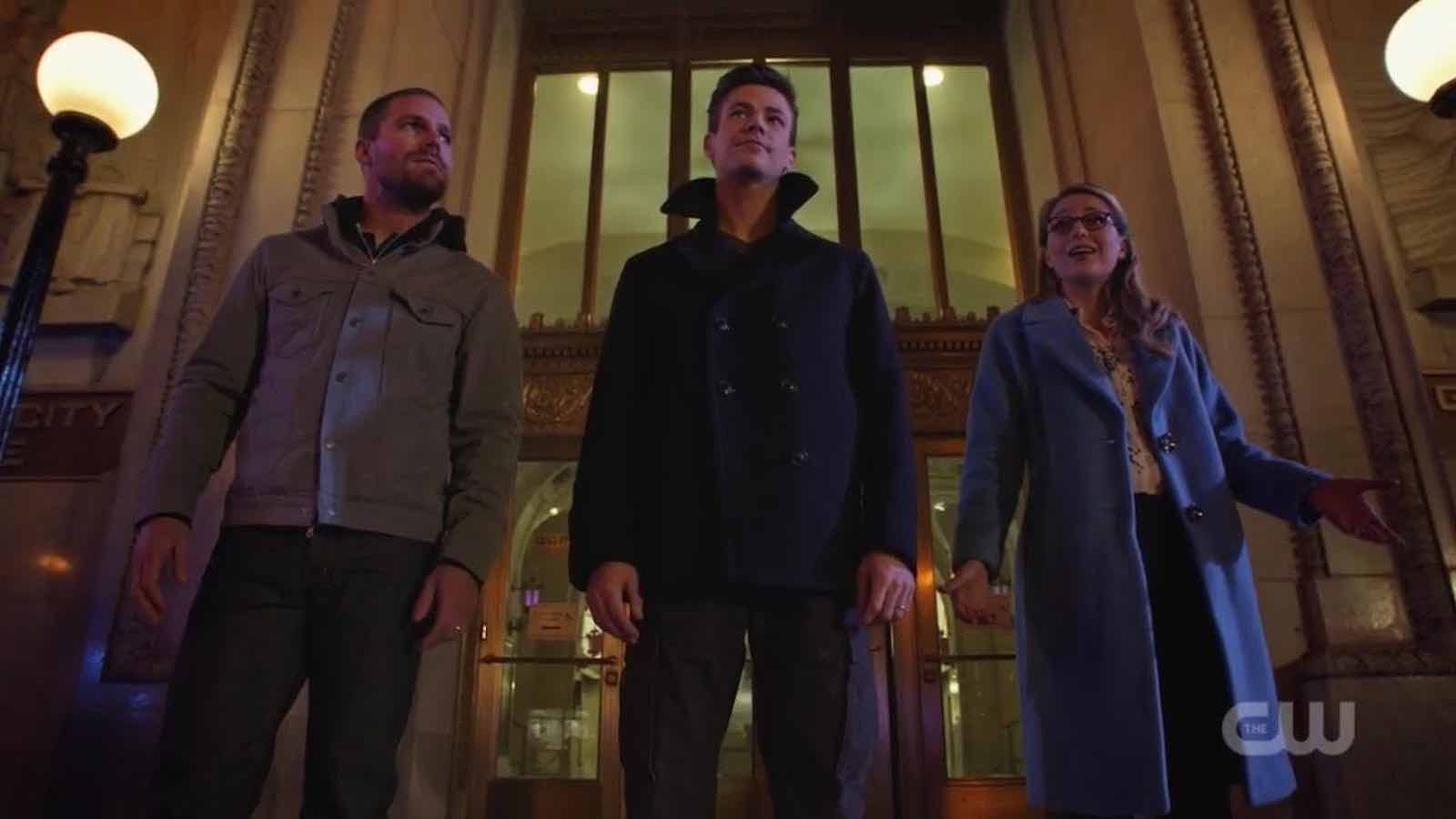 Kate and Kara get each other

At first glance, people would probably wonder what Kate Kane and Kara Danvers would have in common. The answer is that they have a lot in common. Both are heroes trying to make a name for themselves outside of their more popular, better known male counterpart. Both are dealing with trauma left over from their childhood. Both know the pain of having a family member be a bad guy. Both know how taxing the double life of a superhero can get.

Kara and Kate are in the unique position of understanding each other in a way that few people can. Like Barry and Oliver (Stephen Amell) had their own special bond, Kate and Kara seem well on their way to have that. You know what cemented that bond between Barry and Oliver? The solo crossovers between The Flash and Arrow as it allowed the two to interact and bond without the fate of the multiverse hanging over their heads. 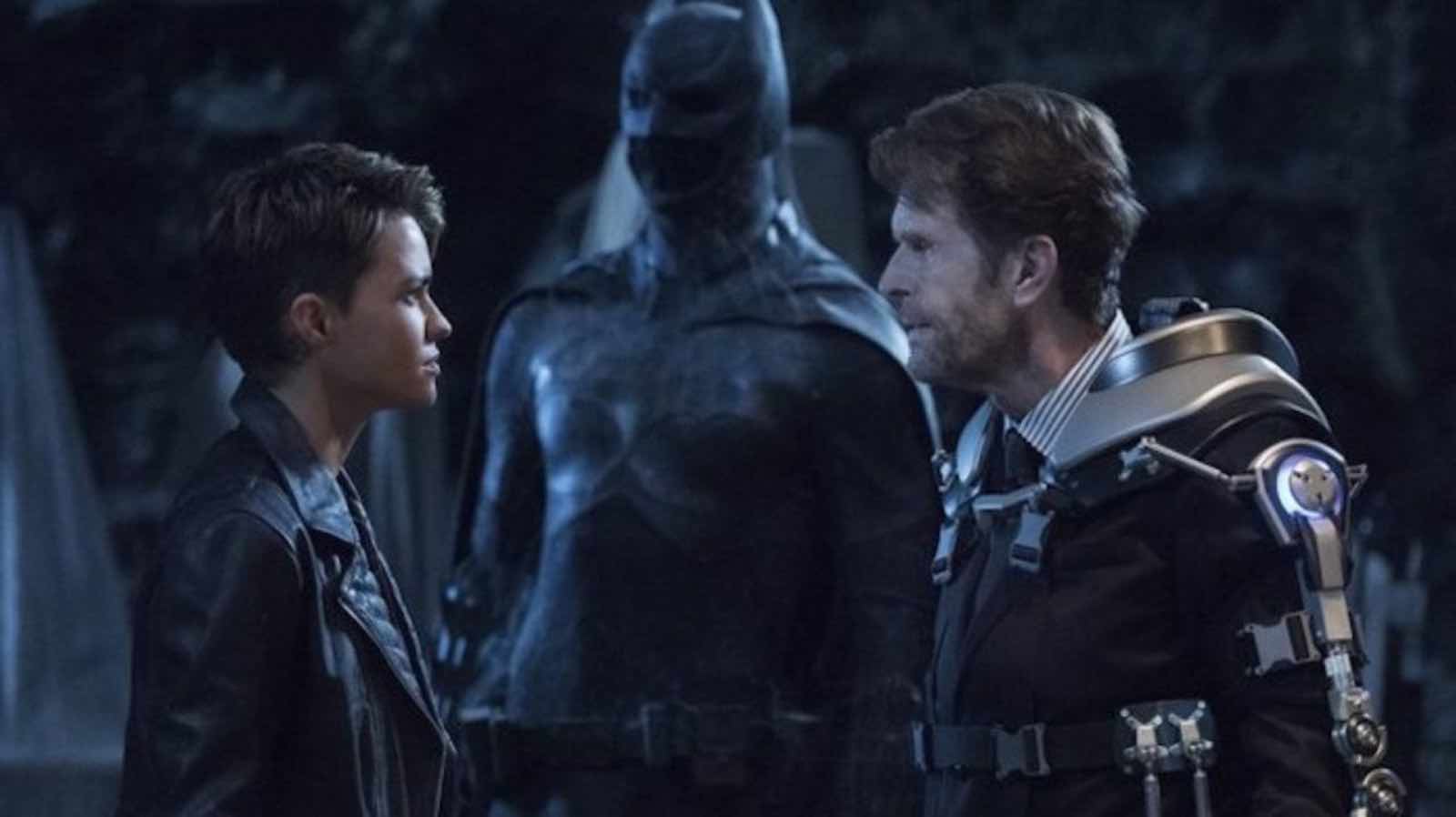 Kate and Kara also have things to learn from each other

What makes Superman and Batman such a compelling team is that the two have different ways of viewing the world. Even with their differences, they still respect the other’s worldview. It looks like in the Arrowverse, Kate and Kara are set up to have a similar dynamic. That’s not a bad thing at all.

Part of what made Kara and Lena’s (Katie McGrath) friendship so compelling to watch is that they see the world in different ways. Kate and Kara have a similar dynamic. Going into the crossover, Kate’s world has been rocked with the realization that maybe saving Beth/Alice (Rachel Skarsten) isn’t worth it. After losing her Earth and what remains of her people, Kara may do something reckless on the off chance of success. 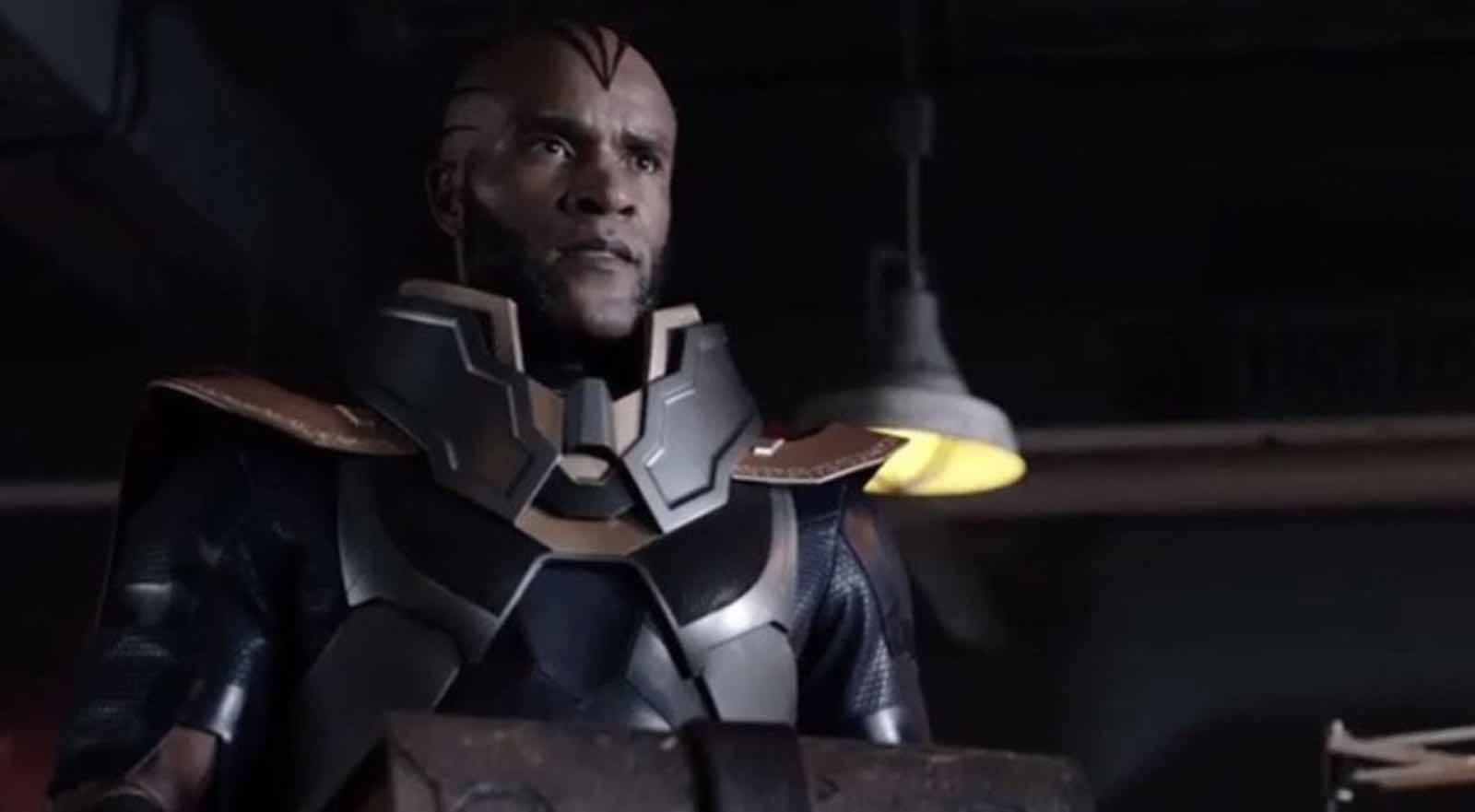 Kate’s Bat-like pragmatism and Kara’s Super-like optimism provided great counterparts for each other. Sure Bruce of Earth-99 (Kevin Conroy) may have been a serial killer, but Kara reminds Kate that she doesn’t have to go down that path. She also shows Kate a picture of the Beth and Kate of Earth-99, happy and together. Maybe Kate and Alice cannot have that, but perhaps the knowledge that they were happy somewhere out there is enough. Sometimes, that form of optimism is enough.

Kate, meanwhile, knows Kara plans to use the Book of Destiny to revive her universe. The end of “Part Two” sees Kate contemplate some kryptonite that she took from Earth-99 Bruce. As the Monitor (LaMonica Garrett) told them, trying to revive a universe could drive a person to insanity. Kate is pragmatic enough to make sure that Kara stays sane.

Optimism and pragmatism, hope and courage, Bat and Super, these two provide a unique balance to each other. It would be great to see it developed in a one on one sense. 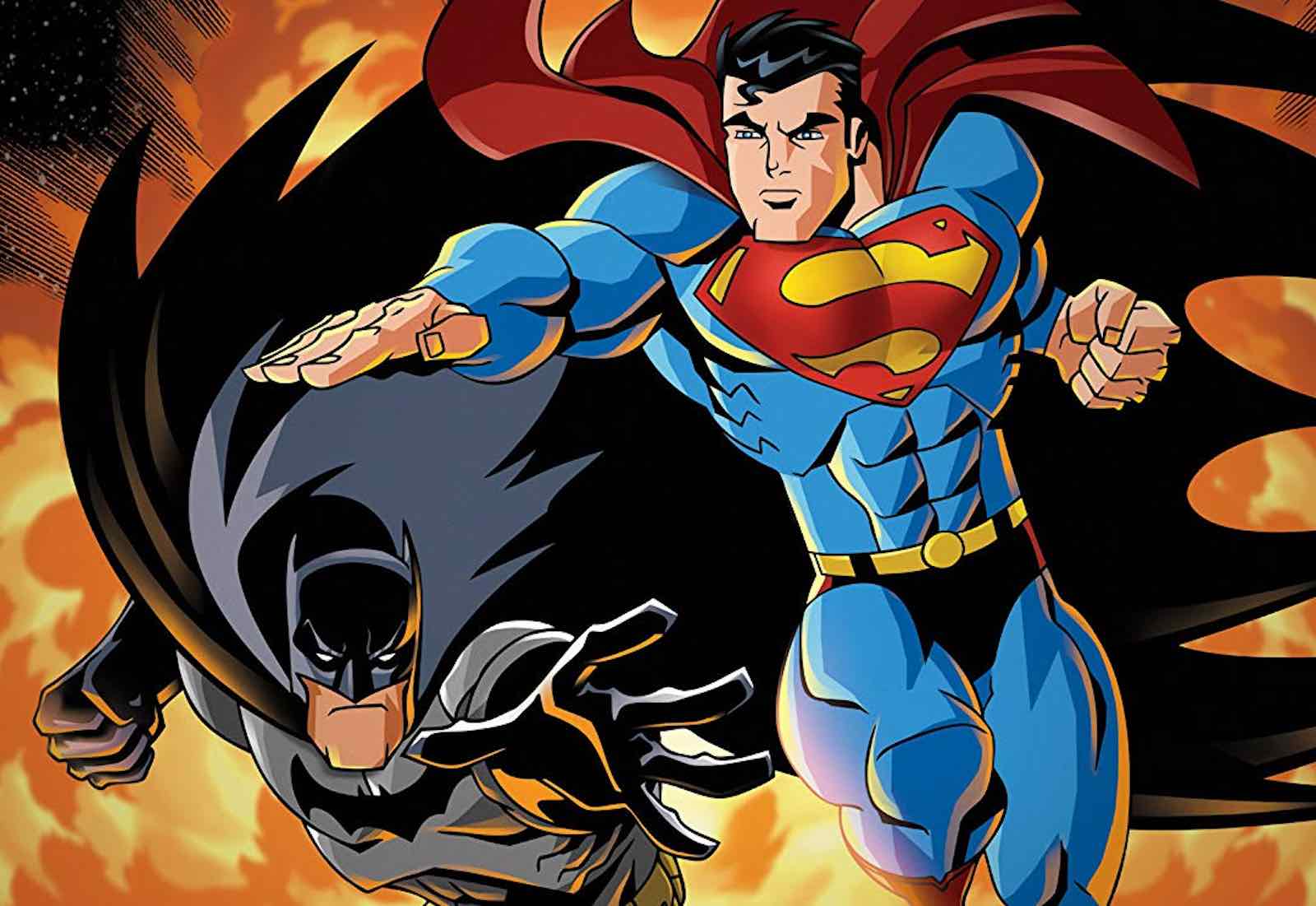 There are awesome stories that could be adapted.

Series across the Arrowverse love to put their own twist on comic storylines: classic and little known. Which duo has the most storylines together? Batman and Superman, it would be great to see how those translate to the Arrowverse.

If you don’t know comics canon all that well, then here are just a few stories that would be an amazing basis for a Supergirl and Batwoman crossover.

The 1990 World’s Finest see Superman and Batman switching cities when Lex Luthor and the Joker do the same. This is clearly the simplest way to crossover, but it would be great to see Kara working with Kate’s usual cohorts while Kate does the same with the DEO. 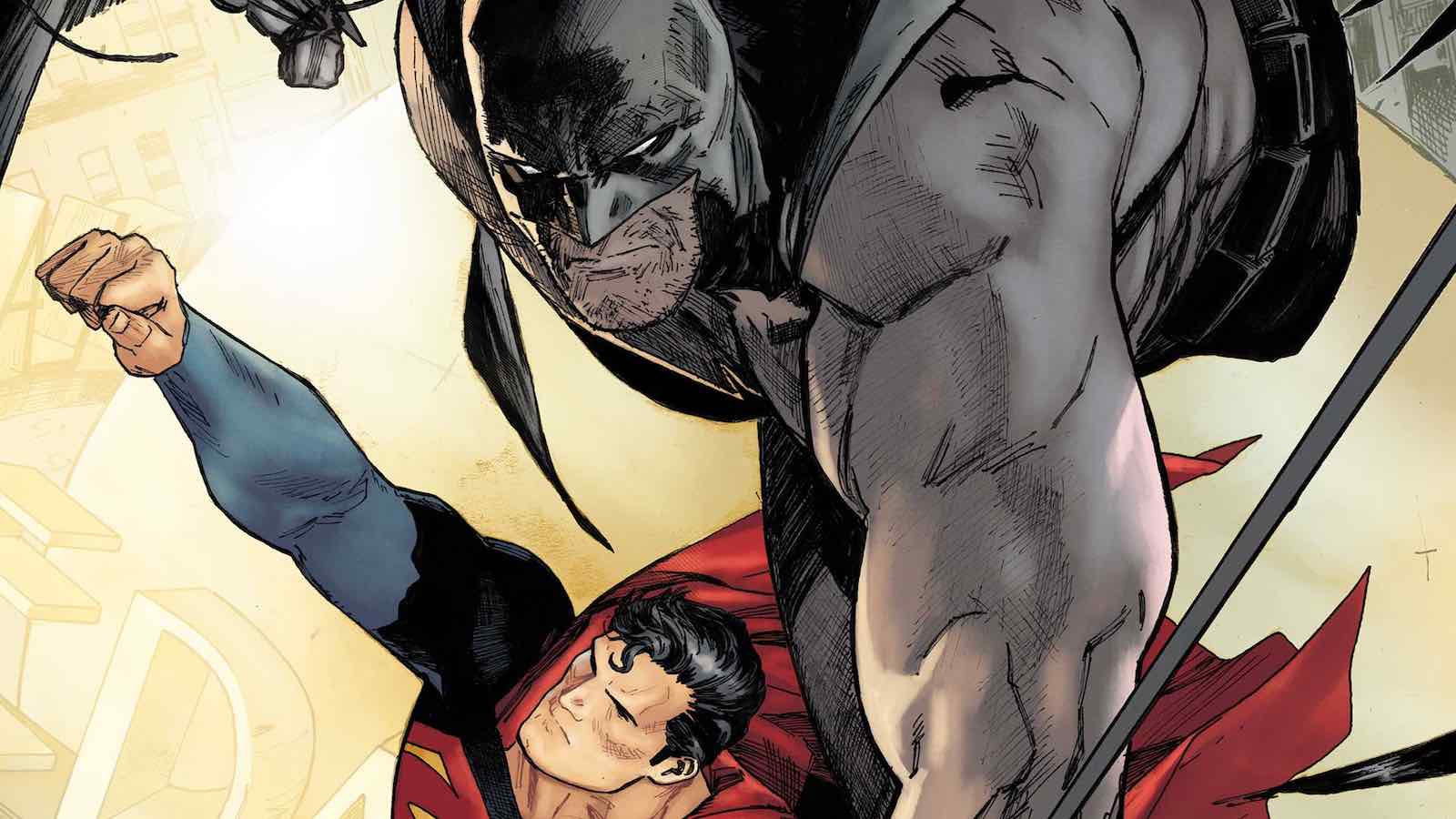 Superman/Batman: Public Enemies is a comic that we highly recommend. The story follows the duo on the run following President Lex Luthor declaring them public enemies. We don’t think Lex Luthor (Jon Cryer) would become President, but having Kate and Kara on the run and trying to clear their names could provide a fun edge to the proceedings.

Batman #36-37 takes place in the “Rebirth” storylines of DC, which features Bruce and Clark’s dance over the best man issue (Bruce is getting married to Selina Kyle). The culmination is “Date Night”, which sees Bruce, Selina, Clark, and Lois all go on a double date. Kate and Kara don’t have significant others at the present. But the Date Night concept could be translated into a “Ladies Night” sort of thing, perhaps taking inspiration from The Flash’s “Girl’s Night Out”? 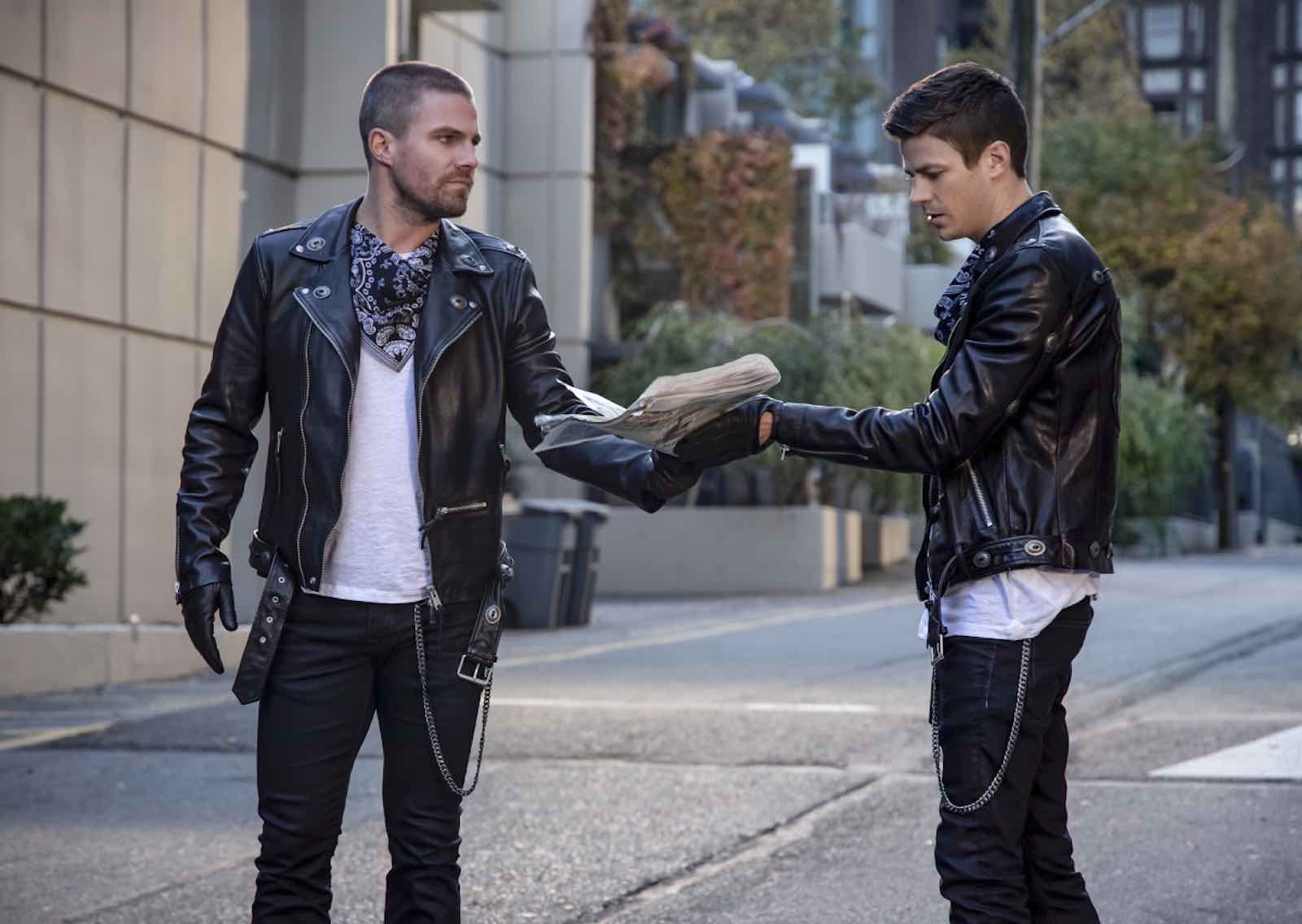 A new super-friendship has to take center stage

Barry and Oliver’s friendship remains at the center of every crossover. With Arrow ending and Oliver’s fate approaching (death, Lazarus Pit resurrection, perhaps death again), there’s just no way to have that as a focus in a future crossover. We need a new super-friendship to take the stage.

While Barry and Kara are awesome super friends, complete with their own song and everything, they’re just a little too alike. Kate and Kara are definitely the future of the Arrowverse’s super-friendship to define them all. In order to really cement that, they need to have an adventure that’s more lowkey and allows for some true bonding between the two.