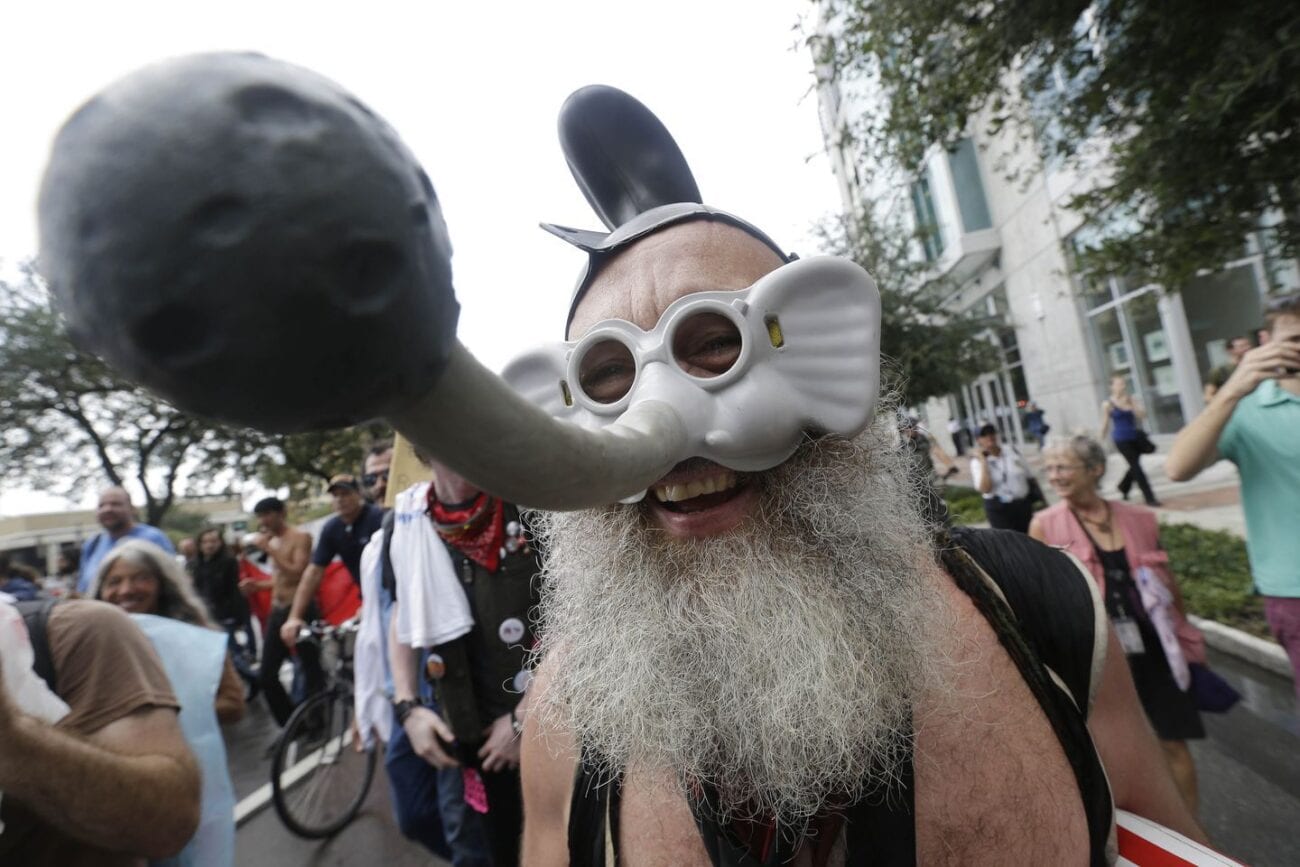 The legacy of Vermin Supreme is anything but normal

The minute you see the boot at any political rally, you automatically know you’re in the presence of a Vermin Supreme fan, or the man himself. “The boot of course operates on a bunch of different levels,” Supreme tells us, during our interview with the United States presidential candidate.

What else would you expect from the satirical artist who wants to give every American a pony? Starting in 1992, Vermin Supreme has run for president in every election cycle, with the intention of making the public more aware of how ridiculous the U.S. government can be. 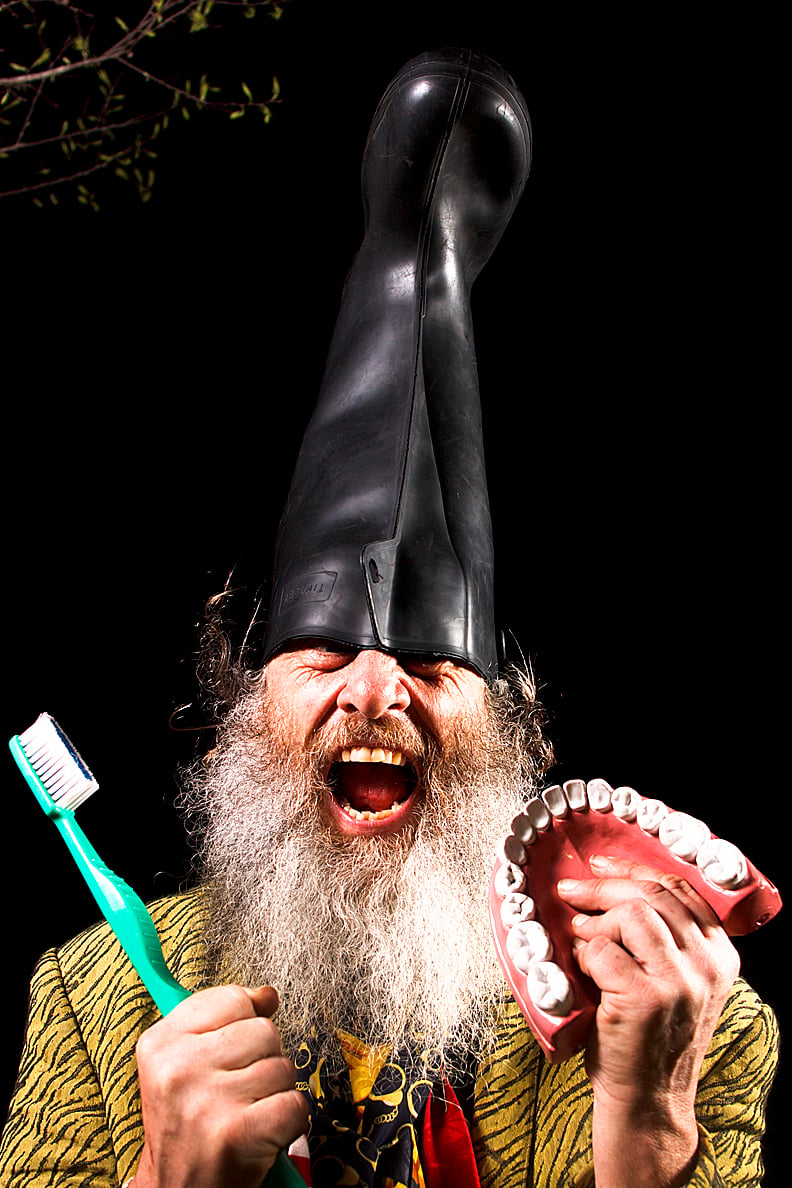 Yet when 2020 came around, the tone of Supreme’s campaign transformed. Sure, the boot was still there, and he still toted his giant toothbrush – but his campaign has taken a genuinely serious turn. Supreme ran a “serious” campaign for the Libertarian Party nomination in 2020 after being approached by the political organization.

“My campaign manager Desire Lindsey reached out to me and asked me if I was interested in running a serious campaign. I had to really consider what that meant. Of course, it was a very different type of campaign, because I wasn’t goofing; I wasn’t spoofing. I still made jokes and could use my humor, but I was sort of in this other realm as another parallel character: you know, serious Vermin.” 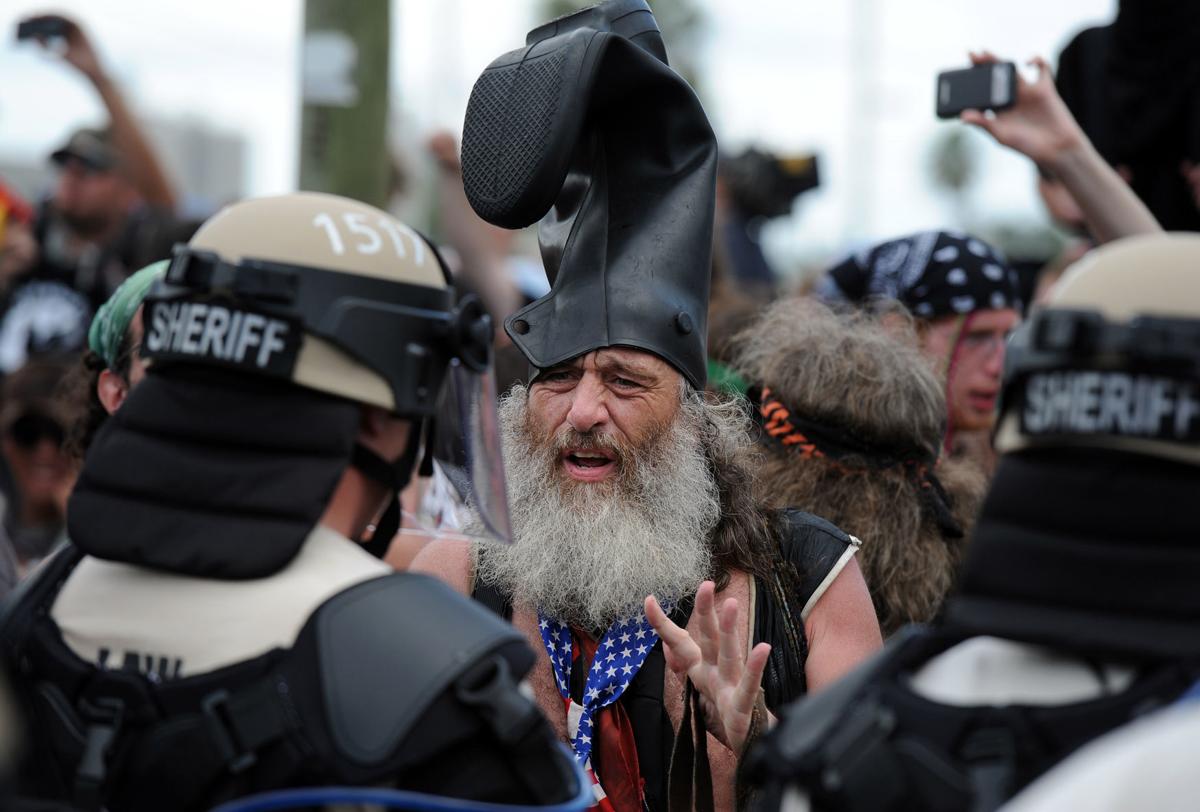 Just like serious Vermin, Vermin Supreme didn’t arrive overnight. Vermin’s humble beginnings were as a booker/promoter for clubs in Baltimore, and since all of these promoters were vermin, he naturally wanted to be the “vermin supreme”.

But Supreme found himself getting burned out, looking for a fresh start. Coincidentally, the Great Peace March for Global Nuclear Disarmament was coming through Baltimore at the same time, and he found his new life – at least for the time being.

“I was inspired and started walking with them to DC. Met a bunch of anarchists, and decided that I wanted to be involved in this roving demonstration protest movement.” Joining in on several other marches as well as teaming up with the collective Seeds for Peace, Supreme spent his time fighting alongside fellow anarchists in these protests. 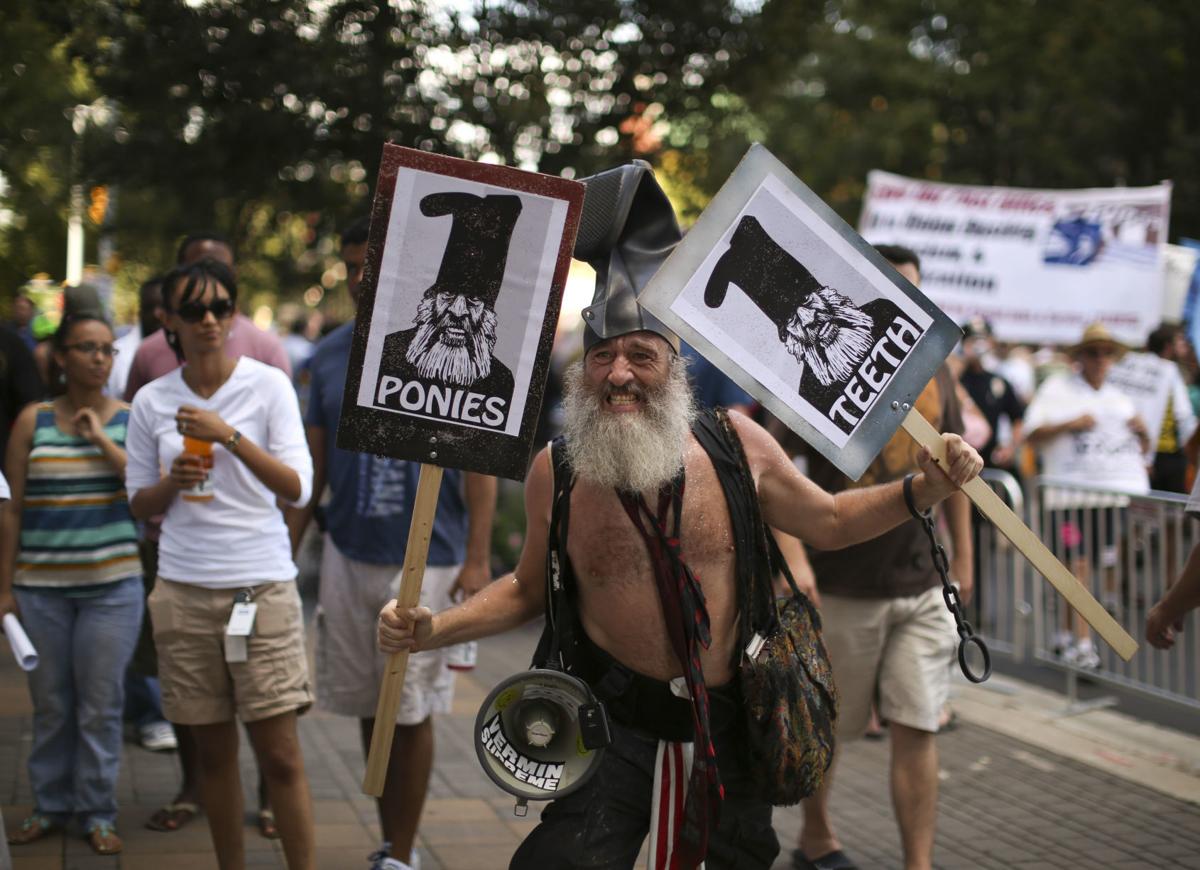 Around the same time, Supreme also started attending Rainbow Gatherings. An anarchist’s dream, these events situated in nature claimed to offer freedom from capitalist society and focused on peace, mutual aid, and mutual respect. In this heady hippy atmosphere, Supreme found himself drawn to developing his “clowning” skills, as he puts it.

“At that time, especially at the gatherings, because they allow you a whole amount of freedom, I spent the first several years honing my clowning skills, honing my audience/master of ceremonies skills at talent shows and things of that nature.” Supreme’s time mastering these skills was put to the test when he later joined the Shanti Sena, a peacekeeping group designed to help de-escalate situations.

Specifically, Supreme spent time trying to smooth over tension with cops and walk with them during Rainbow Gatherings, helping destigmatize their relationship. Their purpose was “trying to bring them over to a different way of seeing things they were propagandized about seeing.” Using humor, Supreme helped try to build a better relationship with authorities. 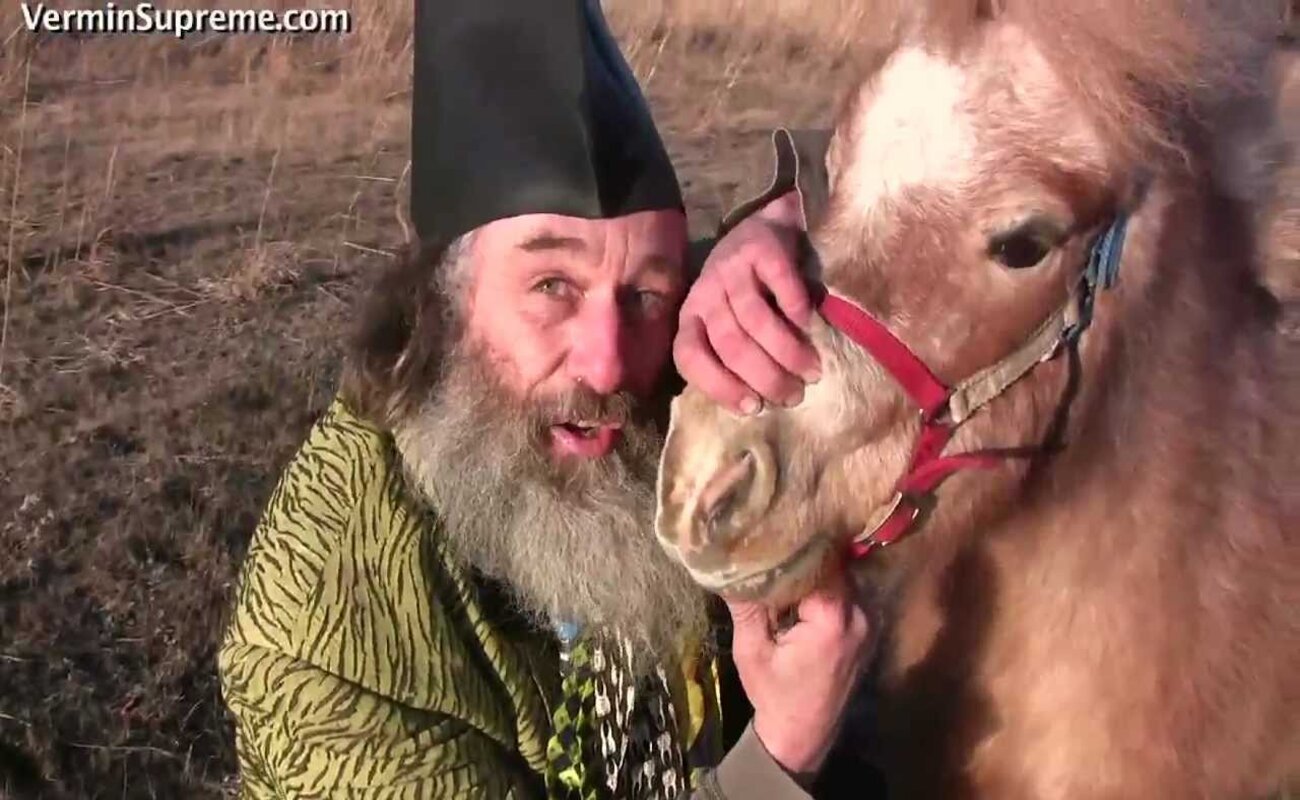 While all of this was going on, Supreme found himself running for office, starting with the mayor of Baltimore in 1987. Of course, running for him meant just being funny, not any genuine political goal. As Supreme took his “clowning” skills to the outside world, using them at protests to help de-escalate and relax police and protestors alike, he would also campaign at such events.

“The Rainbow Gatherings and political demonstrations were my first national audiences, as people come from all over.” As Supreme’s desire grew further, he entered a New Hampshire U.S. Presidential party primary race; the state is known as being the earliest to hold its primary and therefore enjoys the loudest media buzz.

“I was going up to New Hampshire, taking advantage of their first-in-the-nation primary status, and the vast, intense mediascape there. Interacting with the actual candidates, and using that as a vehicle to promote my message of absurdity, and me calling them on their stuff.” There, the Vermin Supreme we know & love today was born. 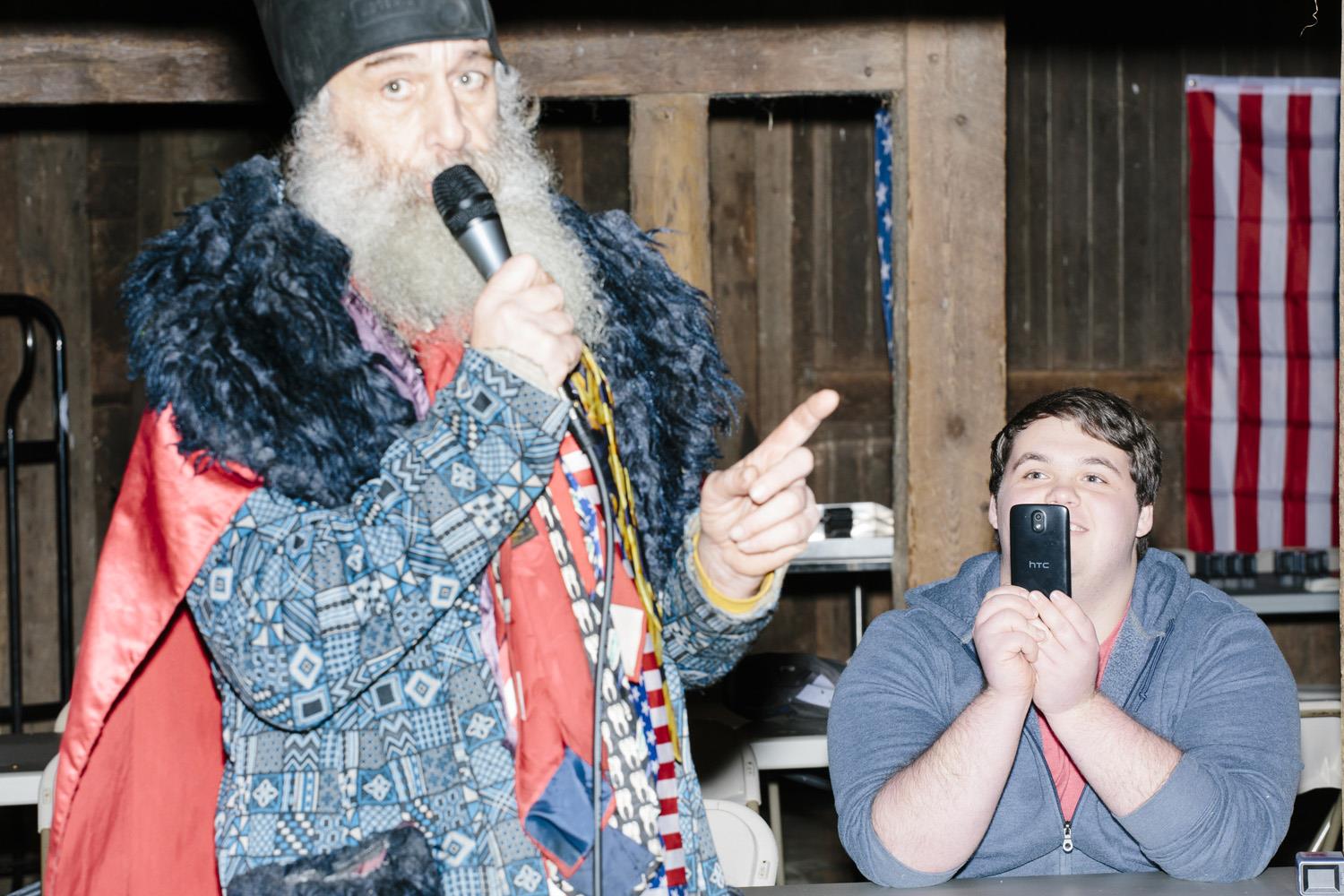 Since 1992, Supreme has been on the ballot as part of New Hampshire’s primaries, running under different parties (just because candidates have to declare a party to run). He never truly was a Democrat running Democrat nor a Republican running Republican, but a man with his own views just wearing a varied hat each election cycle.

Even Supreme had to warm up to the Libertarian Party at first, as he felt his views and theirs would clash. “As a left anarchist, mutual aid is a very important thing to me. But I was always a little bit leery of even bringing it up to my Libertarian friends because I was afraid they would corrupt the phrase and murder it.” 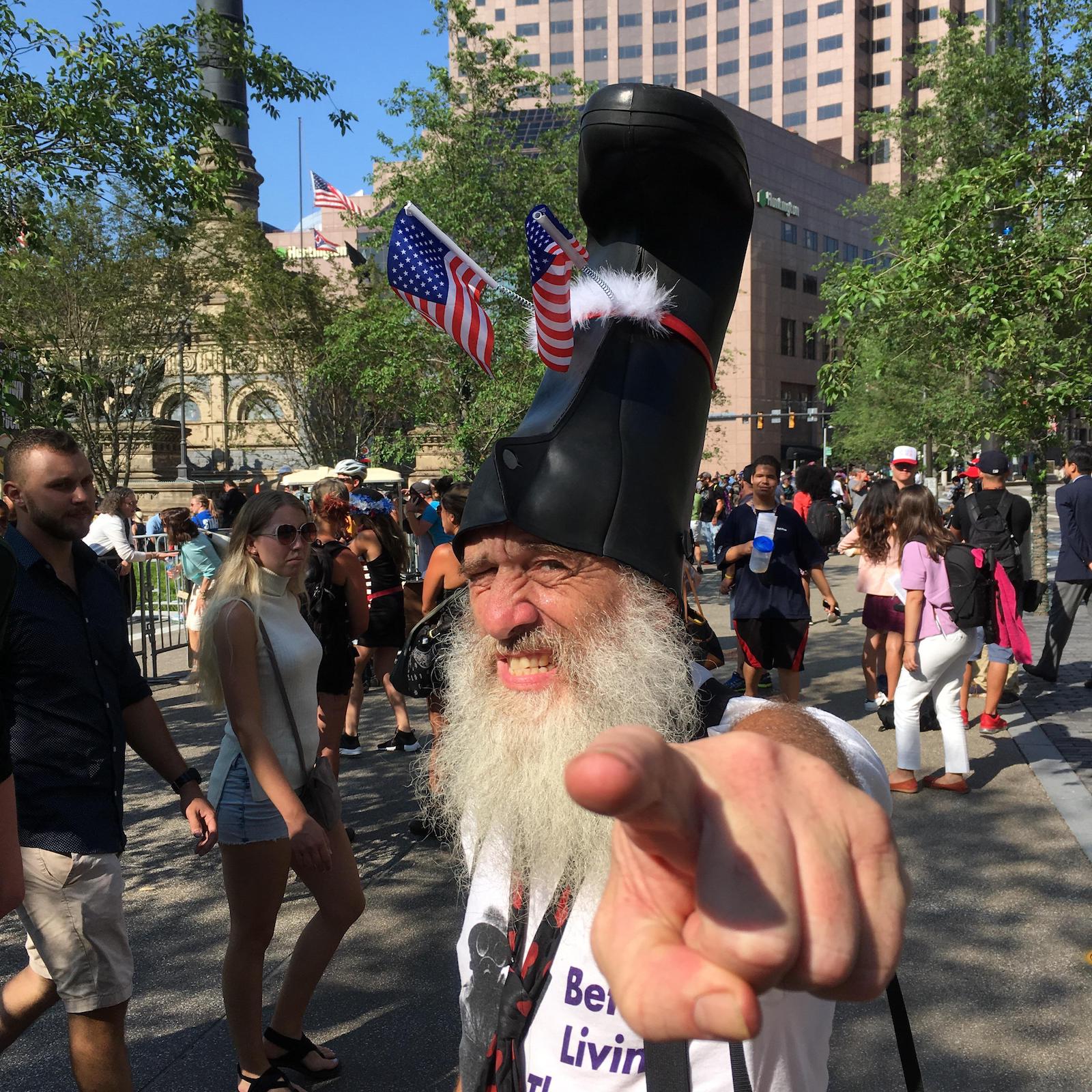 As he opened up to the Libertarian Party, Supreme realized he finally landed with a party that, while not perfectly matching, did represent many of his ideals. So while his election in 2016 was still more for fun, it was the first time Supreme felt at home in the party he chose to run under. And when offered the chance to seriously run under the party, it was a no- brainer. 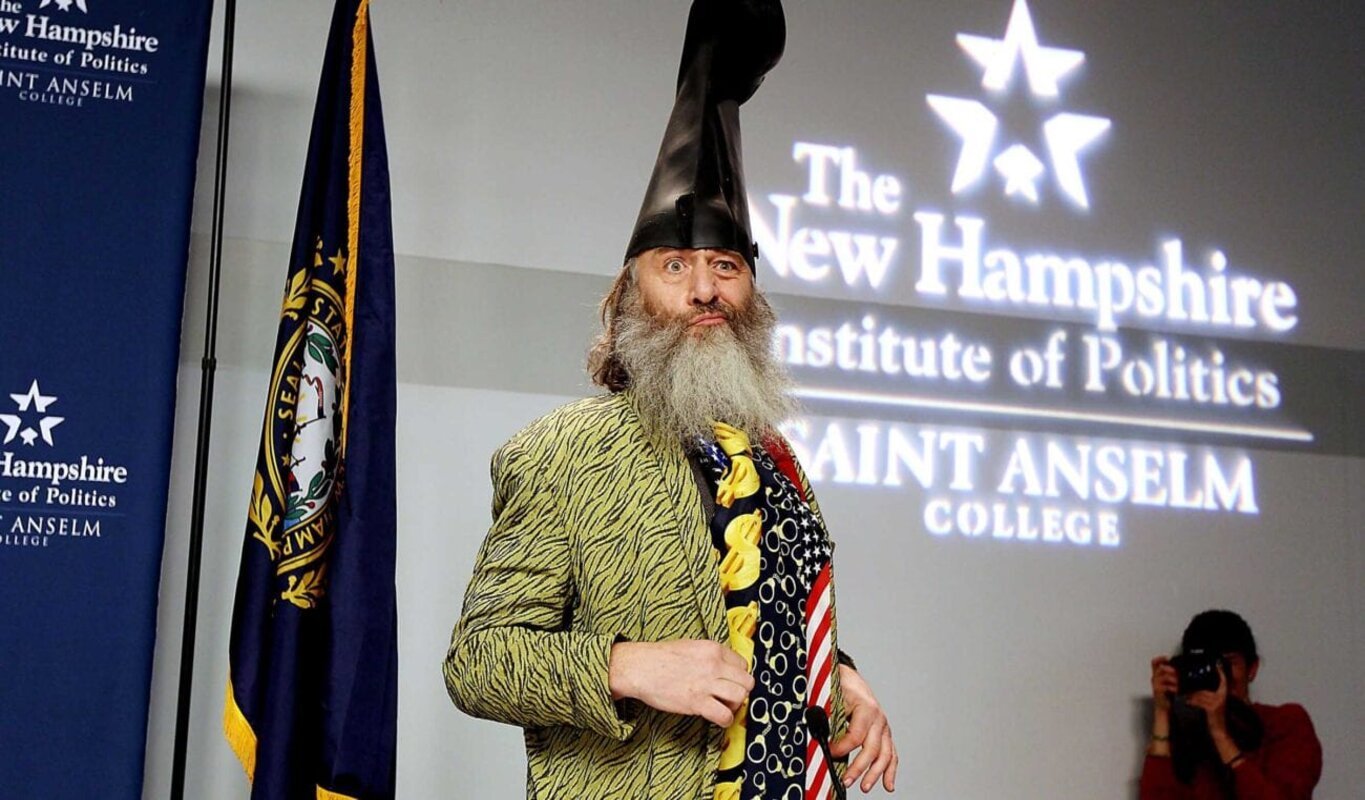 So, with such a long-standing political comedy career, how does one even begin to preserve the work done? Supreme has done his best to make his legacy known, as he started the non-profit Vermin Supreme Institute. “We are putting out things where we recognize the good work that people are doing; we’re putting out little known history bits and trying to develop resources that offer mutual aid, information, and education.”

Supreme also penned a book called I Pony: Blueprint for a New America, writing as a time-traveller from a Vermin Supreme-run America – and why he needs to be stopped! But it’s not just Supreme trying to preserve his legacy.

Supreme told us about the strange way he got involved in the making of the documentary Who is Vermin Supreme?. “I noticed someone following me and filming me, and it was Steve [Onderick]. He asked me if I was interested in participating in a documentary. 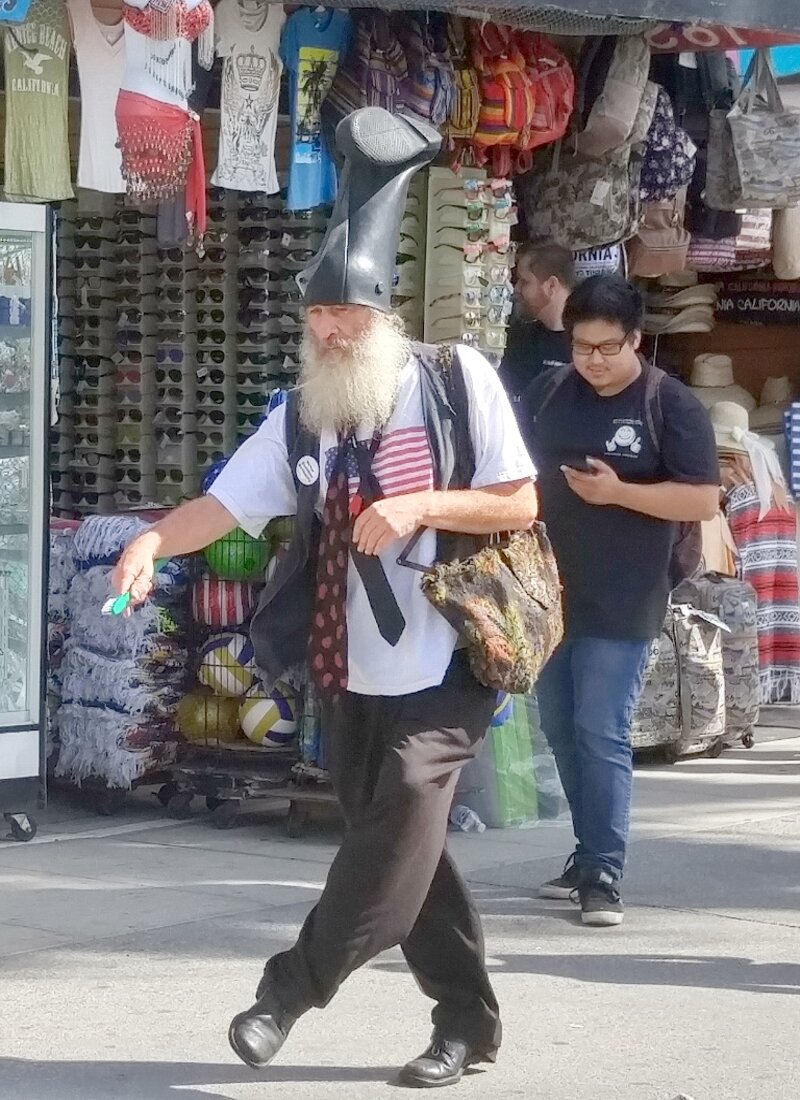 “I agreed, just because I thought it would be a great way to get a bunch of my friends to say nice things about me and be able to see it before I die,” Supreme joked. But Onderick’s documentary is arguably the most intimate about Supreme, as not only does it dive deep into his campaigns, but also his childhood growing up in Rockport, Maine, and his time in Baltimore before joining anarchist movements.

“I guess I was feeling old enough back in 2012 to be concerned about my legacy”, Supreme noted. But Who is Vermin Supreme? is far from the only documentary to capitalize on his legacy. This is Vermin Supreme by political satire artist Rod Webber is another addition to the filmmaker’s extensive catalog of political documentaries. 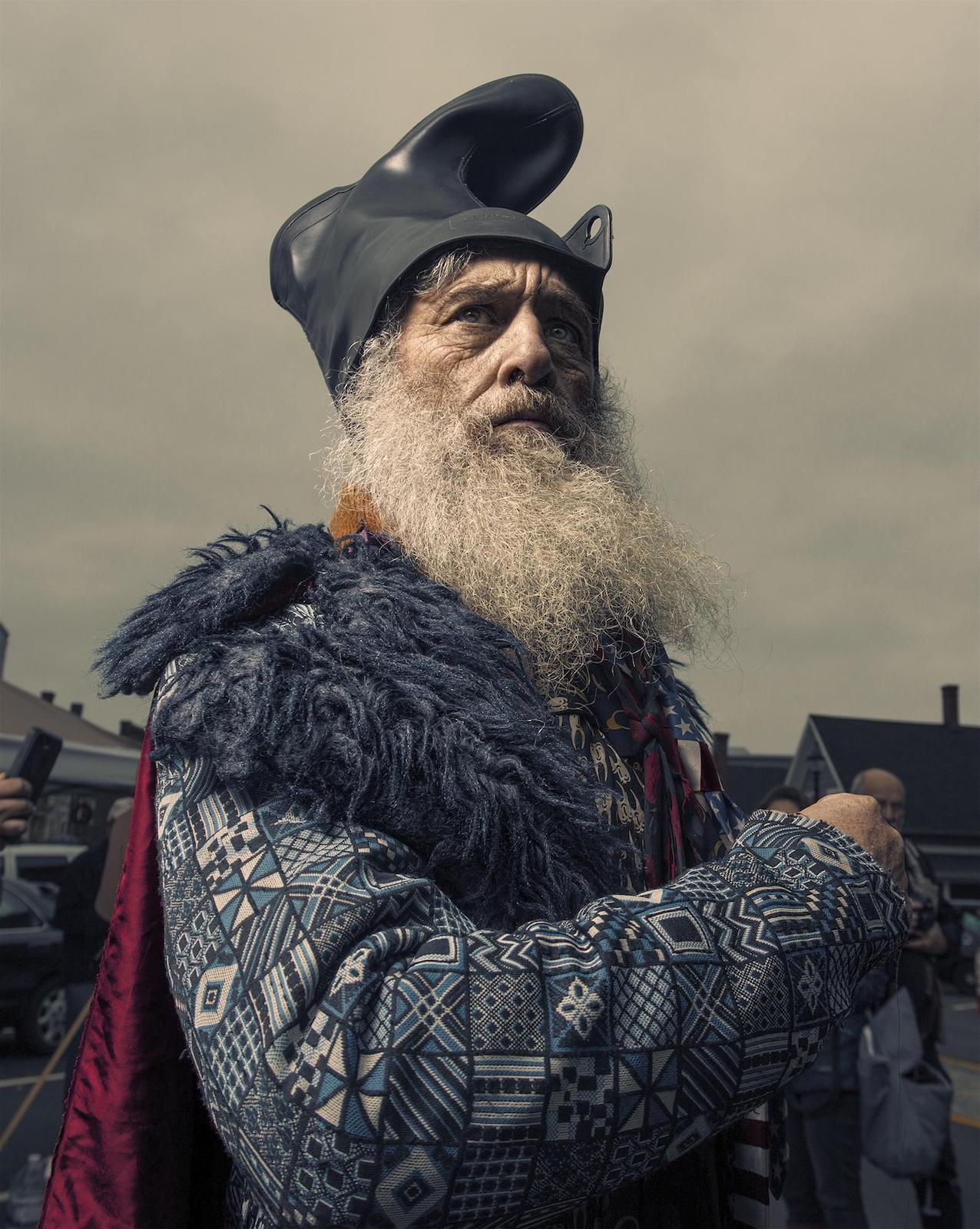 This is Vermin Supreme

When Webber ran as “Flower Man” in 2016, he was in the same circles as Supreme. So as Webber was filming a documentary about his campaign, a lot of the footage happened to feature our favorite boot-wearing candidate as well. That gave Webber a brilliant idea: This is Vermin Supreme.

Supreme explained. “When [Webber] was making his own documentary movie, he realized that he had a folder full of Vermin Supreme. Maybe not enough for a documentary he thought, but he started looking around, and started pulling stuff from the internet, and did interviews and things like that. He came up with enough for a very entertaining documentary.” 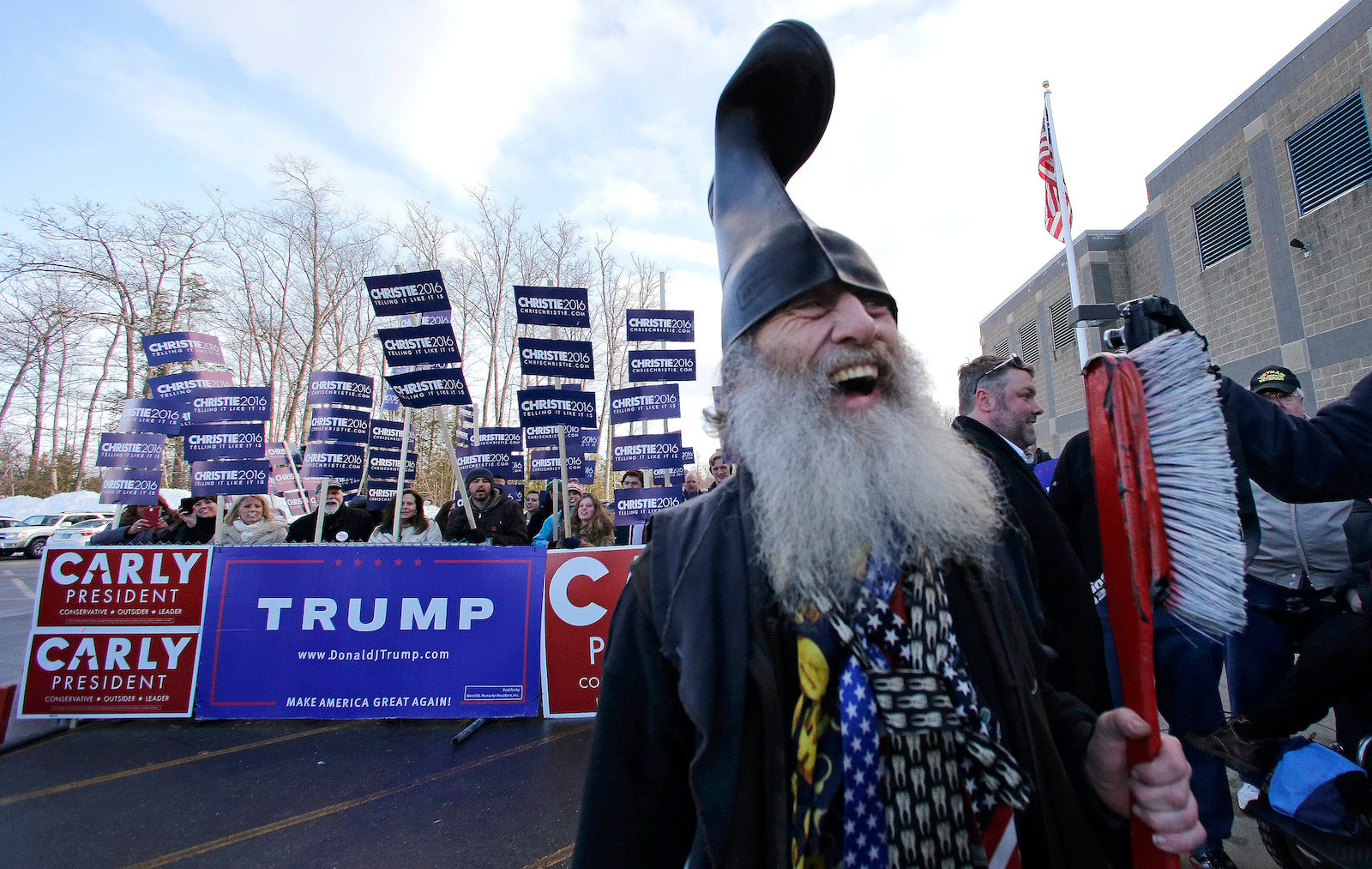 Interviewing leading figures in the Republican party, the film has yet to see the light of day, but Supreme promises it will eventually be released to the public. For now, check out the clips on director Vic David’s YouTube page to see a much more clean-cut Vermin Supreme, as well as the “scathing review” of the film from Film Threat magazine that Supreme reminisced about fondly during our interview. 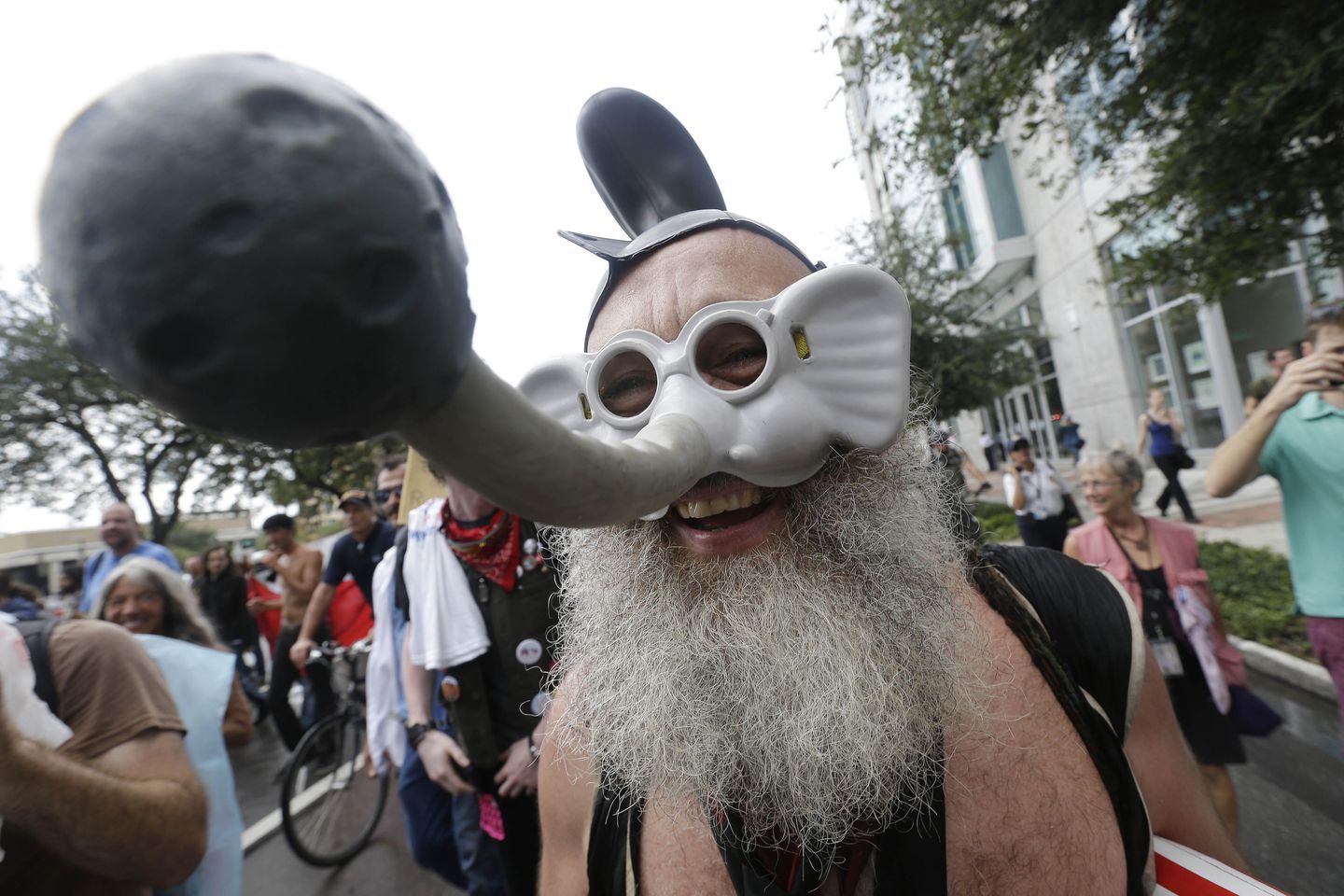 What message does Supreme want to broadcast? “You are the power; you can make a difference. It is not the government that has been getting us through these crises. It is compassion. It is love. It is volunteerism. It is mutual aid. It is people helping people. We can make a difference, and if we’re lucky we’ll be able to overcome all these incredible obstacles that we have presented to us as a species.”

The legacy of Supreme is very well documented, and even when Supreme decides to finally retire and step down from politics, people won’t forget about him. Sure, he may be best known for his boot, bullhorn, and giant toothbrush, but it’s the messages behind those that will outlast the iconic objects themselves.