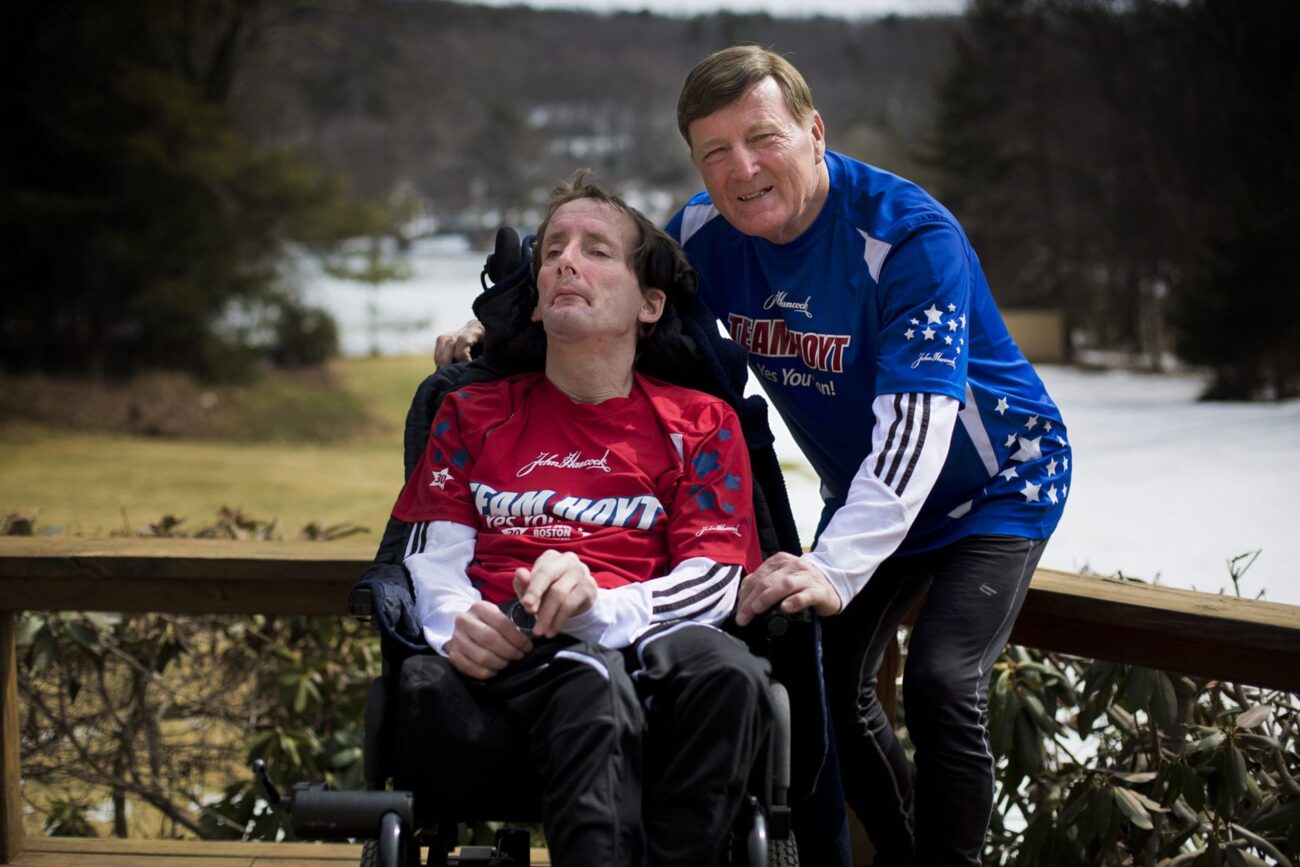 Dick Hoyt, the man who made fathers everywhere feel like slackers for over thirty years, passed away in his sleep this morning. Hoyt and his son Rick were a familiar, motivational sight to anyone who followed the Boston Marathon through the years: the duo ran as a team from 1981 to 2014.

As a team? That’s correct. Rick Hoyt has been a quadriplegic with cerebral palsy since birth. Dick Hoyt would assist his son in the marathon by pushing his wheelchair. The duo didn’t limit themselves to the Boston event – they also participated in triathlons. For the swim portions, Dick would pull a boat where Rick was sitting by attaching a rope to his own body. They had a specially designed tandem bike for the biking portions. 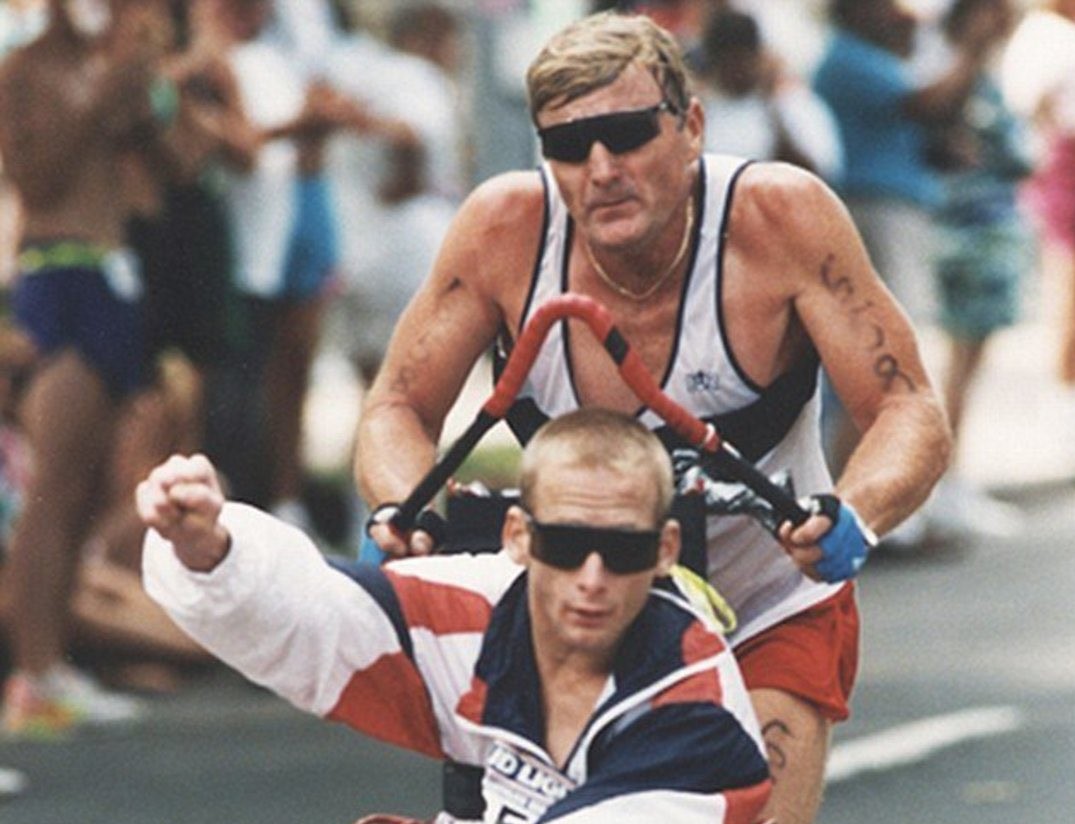 Parenthood will always change you, but it’s easy to imagine Dick Hoyt never expected being a father would lead to him becoming an athlete. But on January 10th, 1962, when baby Rick was born, that’s the road Dick found himself on – even if nobody was aware of it at the time.

Rick Hoyt was diagnosed with cerebral palsy at birth, the result of his umbilical cord twisting around his neck and blocking oxygen flow. Dick and his wife Judy refused to institutionalize their baby, despite many doctors claiming he would never be more than a “vegetable”. The couple could tell Rick’s eyes followed them around the room, and that was enough to encourage them to believe he could achieve more.

The Hoyts’ faith in Rick wasn’t misplaced. With help from the Children’s Hospital in Boston and a lot of work at home, Judy taught Rick the alphabet. By the time the kid was eleven, Dick & Judy were able to fit him with a computer that enabled him to communicate and attend public schools. In 1993, Rick Hoyt graduated from Boston University with a degree in special education. 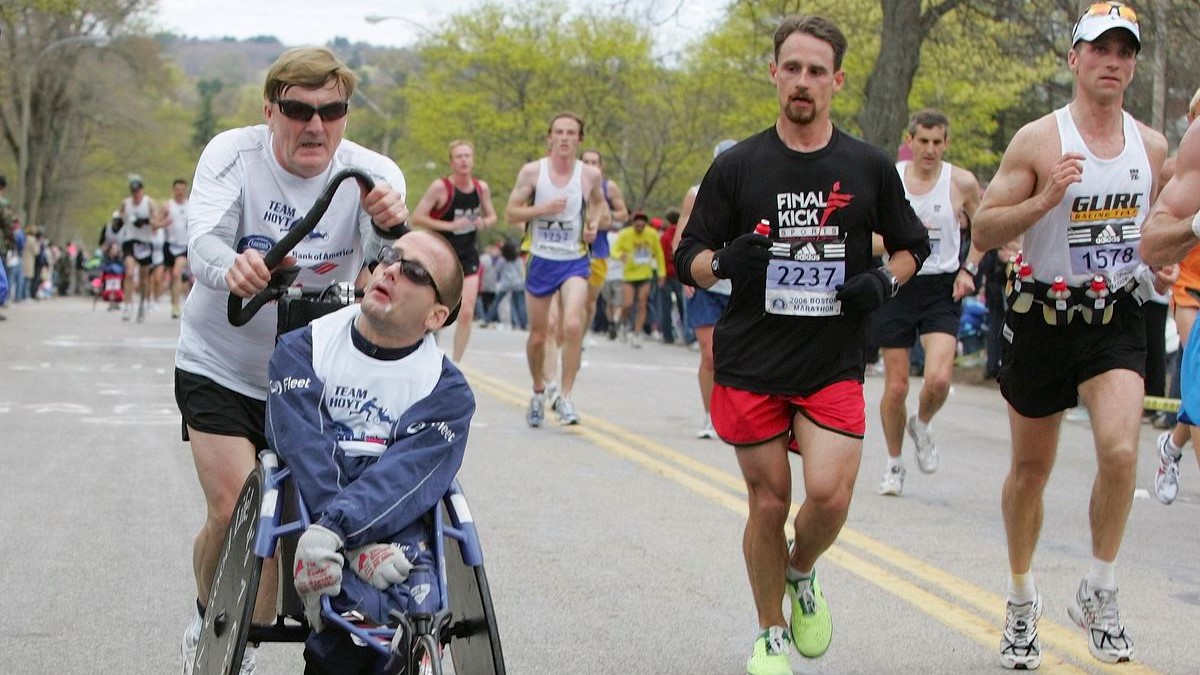 You better shape up

Team Hoyt didn’t make its debut at the Boston Marathon. The first Dick & Rick team-up took place when Rick asked his father if they could run together in a race to benefit a lacrosse player who had become paralyzed. That 1977 race became the beginning of the Hoyts’ athletic partnership – Dick pushed Rick in a wheelchair to prove that, no matter your disability, life could still go on.

Now, Dick Hoyt wasn’t a runner to begin with. By the time his son showed interest in running, Dick was a thirty-six-year old retired Lieutenant Colonel in the Air National Guard. So he did what every loving father would do: he got in shape for his son. What else would you do if your kid told you, “Dad, when I’m running, it feels like I’m not handicapped.”?

In Sam Nall’s book It’s Only a Mountain: Dick and Rick Hoyt, Men of Iron, Dick Hoyt describes his initial training process. Rick was busy with school & studying, so Dick had to work out on his own. The solution? Every day, Dick would put a bag of cement in Rick’s wheelchair and run pushing it. Eventually, Dick was so fit he held a personal record of running a 5K in seventeen minutes – while pushing Rick.

We are tremendously saddened to learn of the passing of Boston Marathon icon Dick Hoyt. Dick personified what it means to be a Boston Marathoner, finishing 32 races with son Rick. We are keeping his many family & friends in our prayers. https://t.co/glau0ryh4R pic.twitter.com/SYmvZfezW7

By March 2016, Dick & Rick Hoyt had competed in over a thousand endurance events, including seventy-two marathons and six Ironman Triathlons. They became beloved regulars at the Boston Marathon, running it thirty-two times.

Originally, Dick Hoyt planned to retire from running after the 2013 Boston Marathon. Yep, the one with the infamous bombing incident – although Dick didn’t know that would happen when he’d made his decision. Like many other participants, Team Hoyt wasn’t able to complete the marathon, being stopped at the twenty-five-mile mark, when the explosions halted the event.

Dick Hoyt couldn’t just retire on a truncated marathon, so he came back one last time for the 2014 Boston Marathon to honor those killed & injured in the bombings. That was Team Hoyt’s last race together. Rick ran with a different partner for a few more years: from 2015 to 2019 he was pushed in the Boston Marathon by Bryan Lyons, a dentist from Billerica, Massachusetts.

Were you aware of Dick Hoyt’s story? Did you ever see Team Hoyt run? Let us know in the comments! 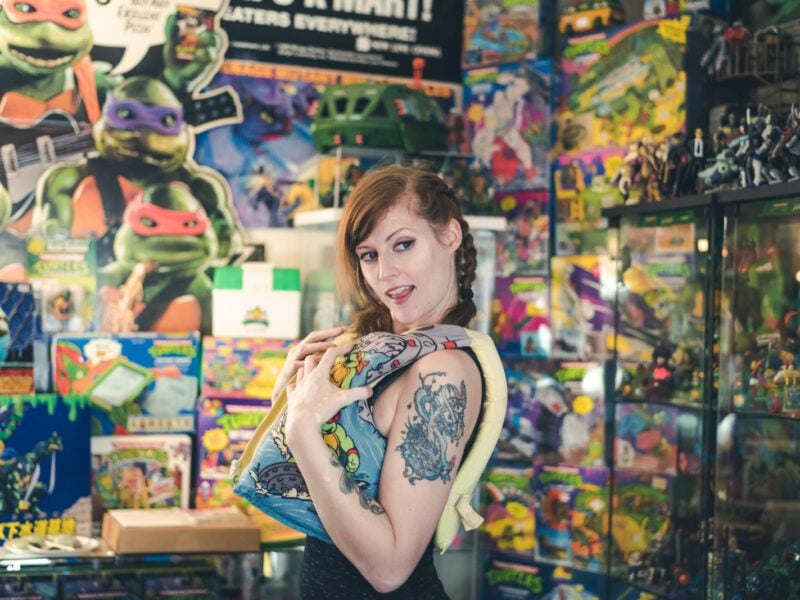 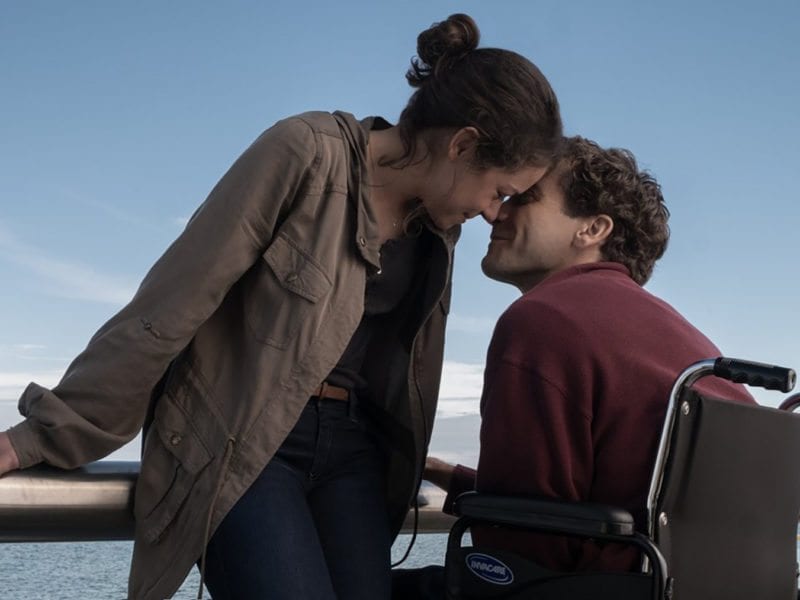