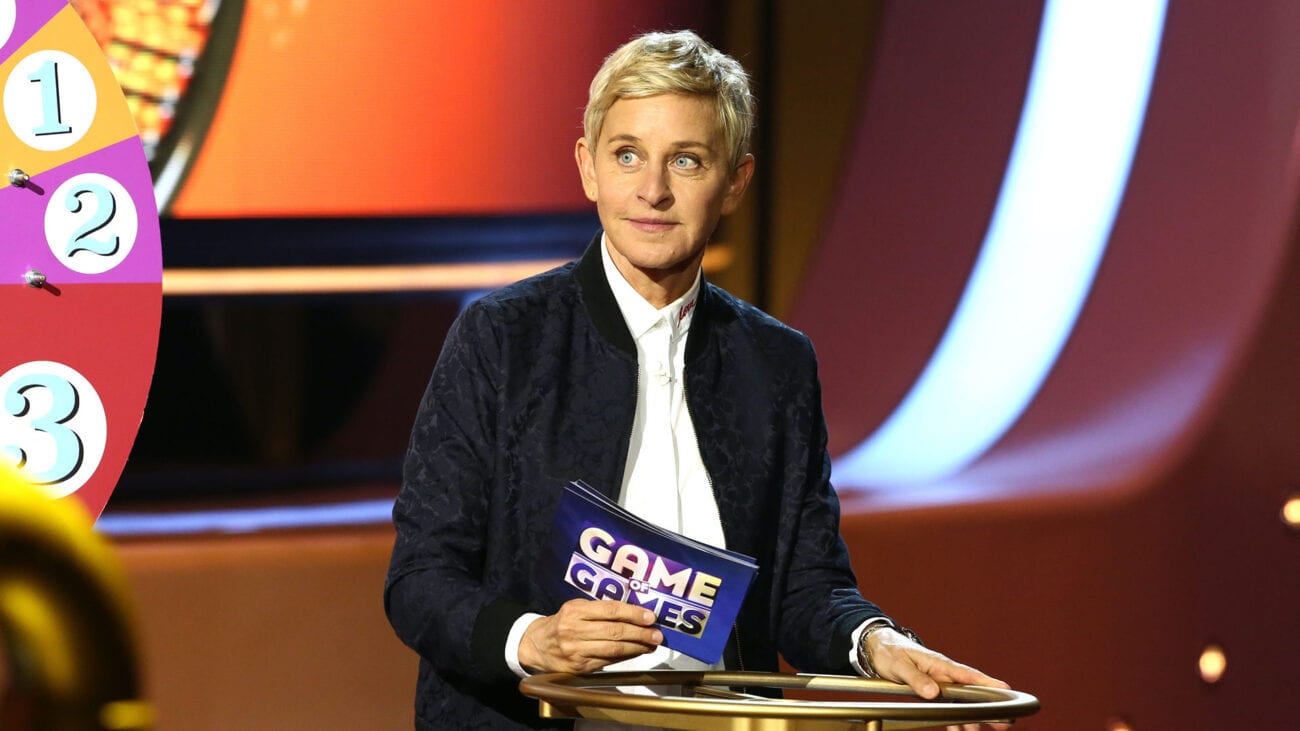 The most embarrassing moments from ‘Ellen’s Game of Games’

Now in its fourth season, Ellen DeGeneres’s hit-TV game show, Ellen’s Game of Games, has all the qualities of entertaining daytime television: contestants pitted against one another for a cash prize, falling from platforms, and subjected to dramatic fails narrated by a witty – if sometimes rude – host.

When names winners inevitably become lost to viewers, we tend to focus on the most bizarre, humiliating TV moments which keep us coming back for more. It’s hard to believe what people subject themselves to for a chance at $100,000.

Let’s take a moment to reflect back on some of the most cringey and embarrassing moments from Ellen’s Game of Games. 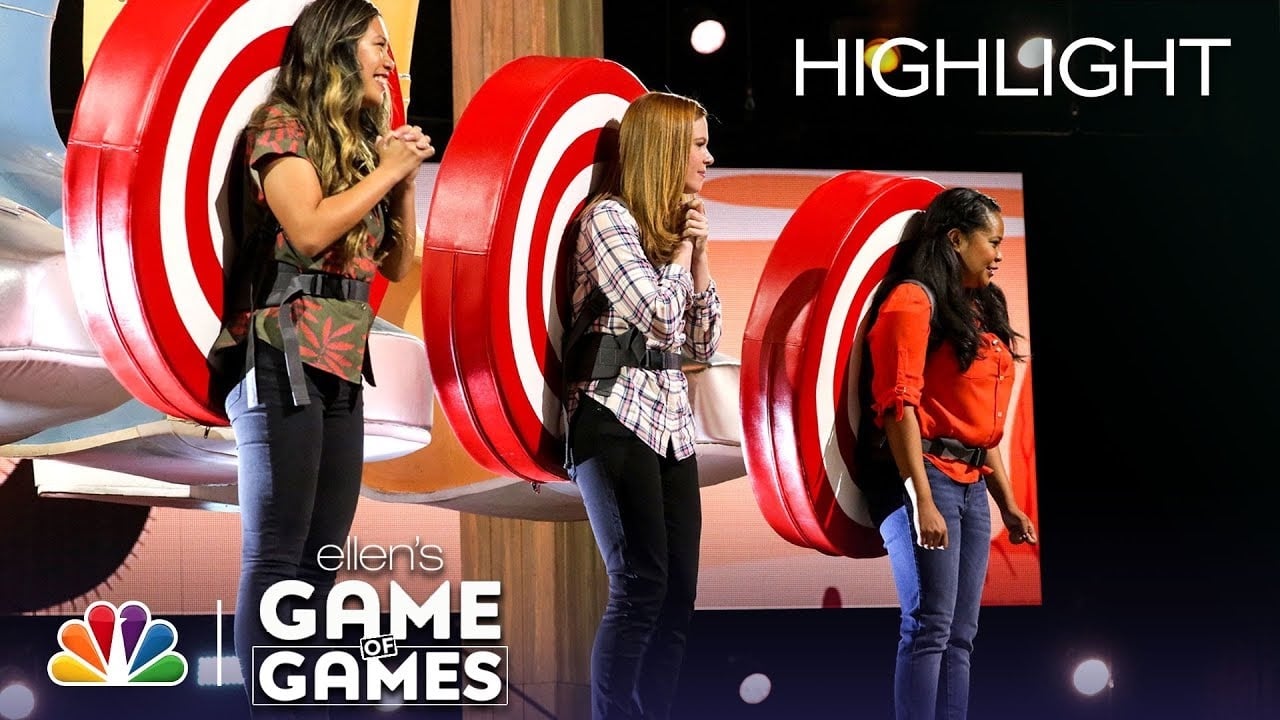 For a segment titled “Knockin’ Boots” to be presented by a host as candid as Ellen, one would expect to bear witness to cringey stories and innuendos regarding sexual questions and answers – but what Game of Games produced was something even more cringey.

Three contestants stand isolated on platforms a few feet apart. They wear giant red targets strapped to their back, waiting to get the boot – yes, a literal boot. To stay “alive” in the game, each must sing a song that is either titled, or features a keyword read to them by Ellen. For each wrong choice, a giant boot is raiders, waiting to kick them off.

A classic three strikes and out game, anyone put on a spot can make for some cringey TV. What makes this spot embarrassing is the contestants fighting off anxiety while making their best attempts to belt out song lyrics. We don’t expect to be serenaded, but the audience’s silence and one-word responses from Ellen make the moments feel eternal. 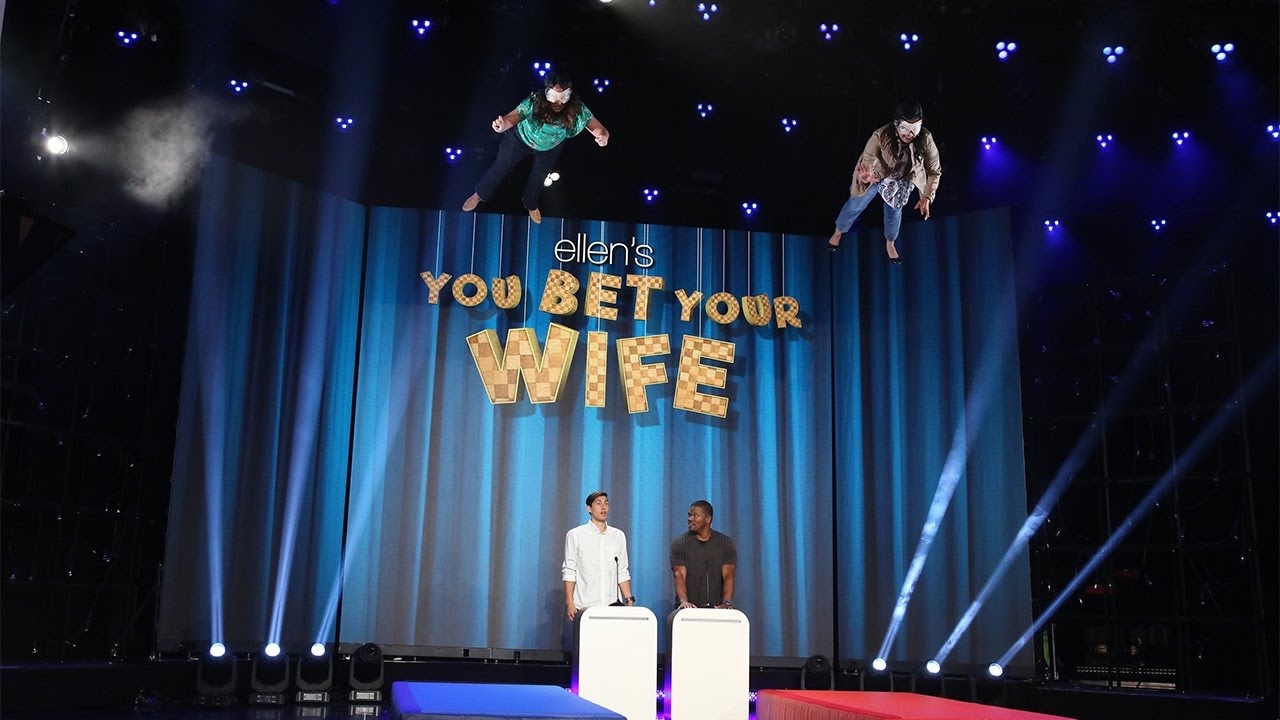 Husbands betting on their wives

The “You Bet Your Wife” recurring segment on Ellen’s Game of Games can be as embarrassing as they come. Two husbands stand at podiums in a question & answer style setup, while their wives hang dangling from wires, blindfolded.

Ellen begins by asking innocuous questions, such as “How many brands of sneakers can your wife name?” Each husband states a guess, and continues to raise the numbers competing for whose wife can name more correct responses. Where they stop indicates how much faith each really has for their respective, hanging wife.

Watching for the first time, one would think it’s as far as the segment goes. Instead a husband can have their wife match their guess, or challenge whoever put up the highest number to meet it, thus securing points. Besides being demeaning and no true measure of intellect, we wonder just how many post-show fights this segment has caused. 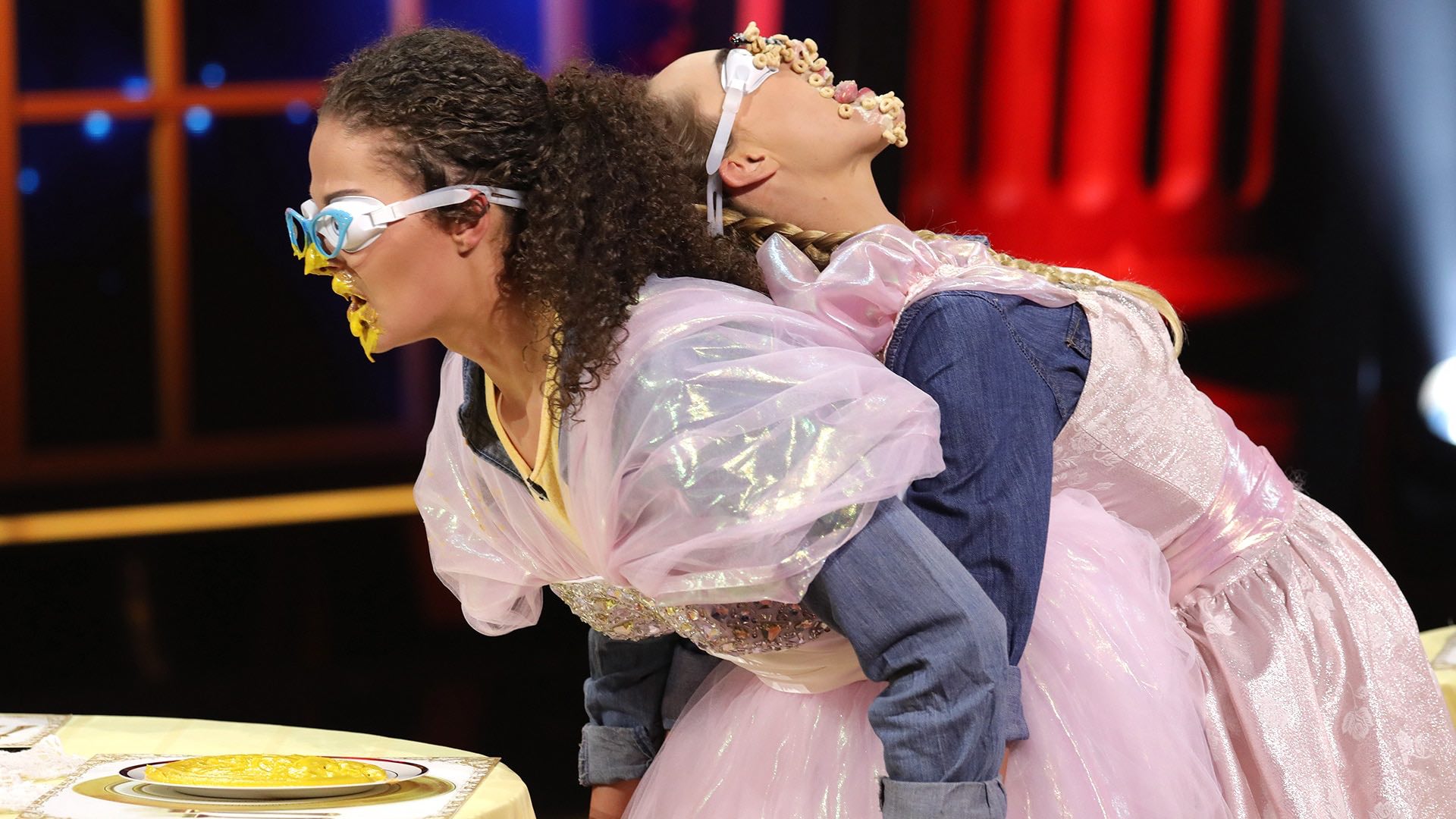 Aside from being a knock-off of nearly every game show’s blindfolded tasting game, ‘Taste Buds” adds the wonderful element of blindfolding two friends, strapping them back to back, and dressing them in frilly pink princess gowns.

The two women take turns leaning forward –thus taking their friend with them – and gnawing away at whatever plated food is presented before them, attempting to describe the non-delicacy for their partner to guess.

These contestants smother their faces in cream and mustard, frantically chomp away at the air while trying for the best score. Besides getting frustrated with one another and fighting off expressions of disgust, they also face down tiresome comments from Ellen the entire time – we’d just keep the blindfolds on until we left the studio. 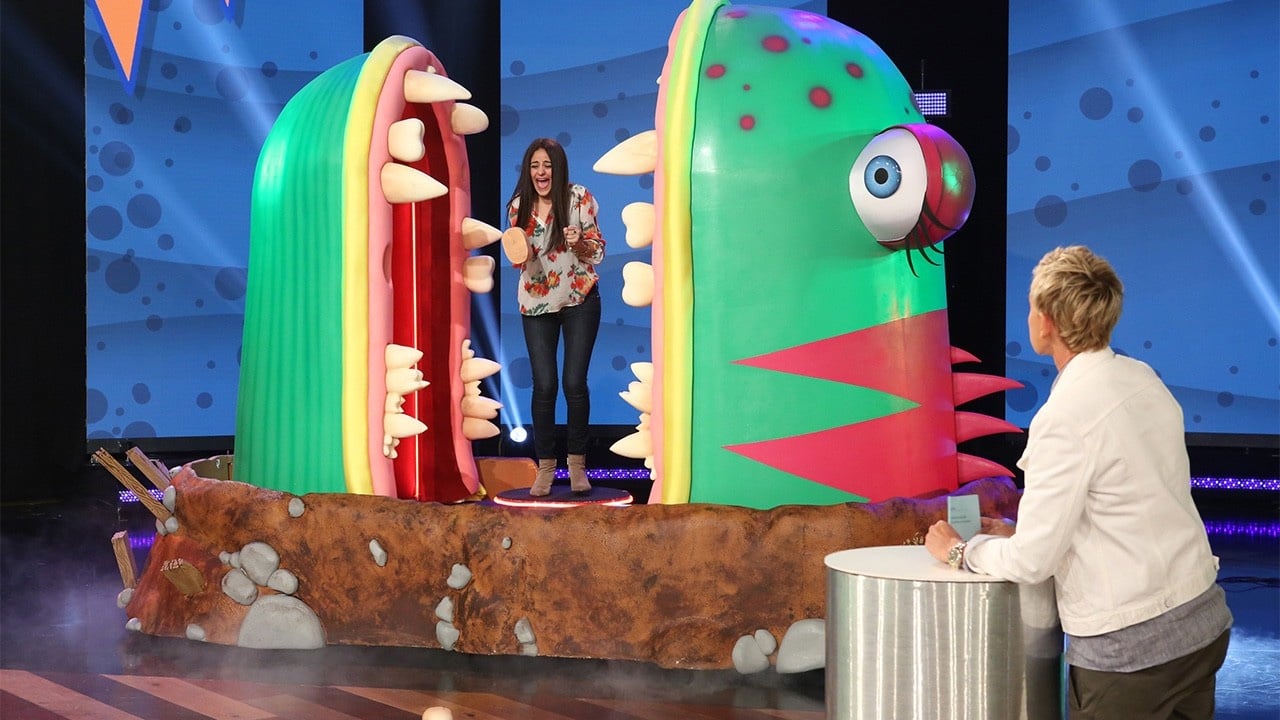 Some games get more embarrassing the more the contestants are forced to buy into them – especially when they contain silly matters for viewer entertainment. Take Ellen’s one-eyed monster game: contestants answer questions, and the loser is destined to be “eaten” by a large monster – one suspiciously reminiscent of Little Shop of Horrors.

To be more specific, after a contestant guesses wrong, Ellen spins a wheel, a number is chosen, and the losing contestant must pull that number of teeth out of the monster’s mouth without choosing one designed to make it angry, thus, closing its mouth around them.

Silly and strange? Sure. But when adults are screaming and stuttering in a giant cartoon monster-mouth, it can be a bit embarrassing to watch. It could only be made worse if their reactions were played back in slow-motion – which is exactly what happens. 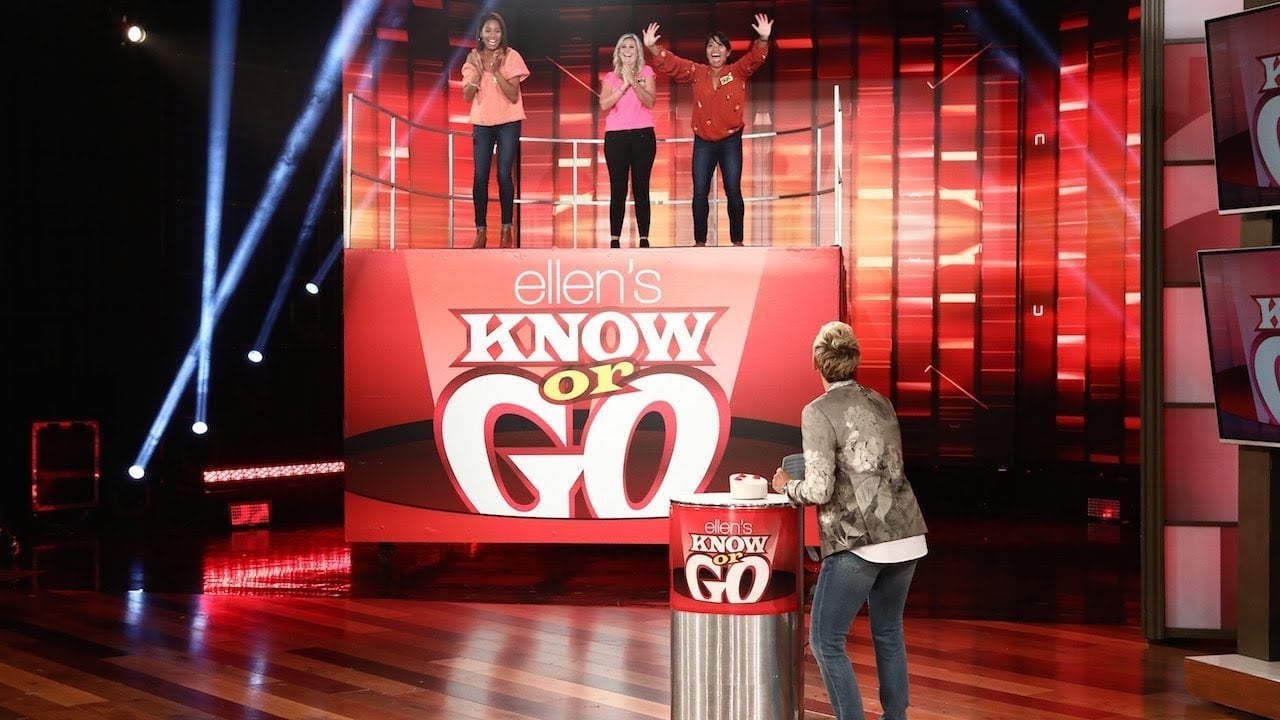 Ellen’s Game of Games tends to rely on some segment staples – including the popular “Know or Go” knockout-round game. The promise is simple: contestants cycle through progressively more difficult questions, and if they get one wrong, they are dropped out of the game – and down a mysterious chute.

In Season 3, one particular contestant had an internal crisis while trying to give an answer for what city is home to the famous leaning tower of Pisa. Frantic may be an understatement – the woman appears to be in a literal panic, grabbing her head and panting before uttering out an incorrect answer.

Just as you think the contestant will be dropped from the segment, she looks to be holding back tears, screaming “Ellen, Ellen” all while waiting to be dropped. Her final words echo, “Ellen I love you” – even the host looked more than satisfied with ending the embarrassing moment. 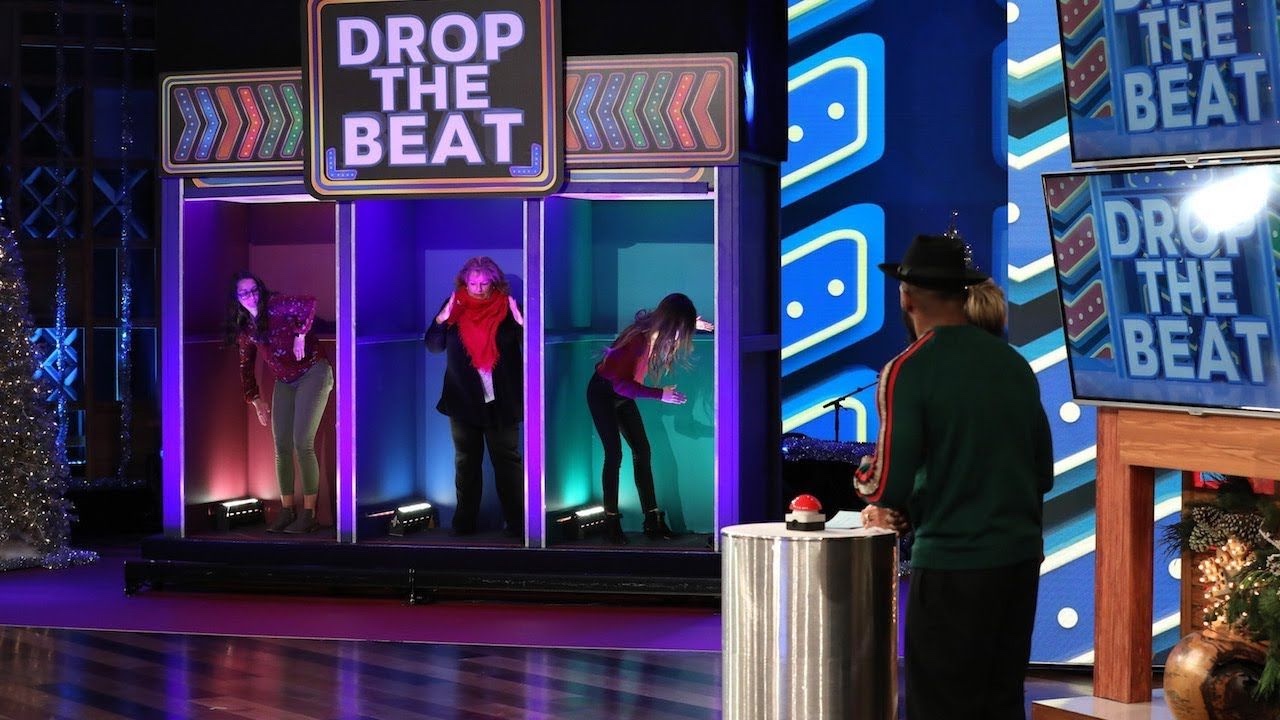 In 2019 Ellen and her DJ, Stephen “tWitch” Boss, introduced one of the cringiest segments ever seen on Game of Games – a segment called “Drop the Beat.” Random contestants are chosen from Ellen’s audience to stand in colorful, open stalls and dance to whatever they are told – only to be judged on their impromptu skills.

The fun lasts all of a few seconds before Ellen and tWitch have an open discussion poking fun of the contestant’s dancing, before selecting a “loser” for each round – who then has to dance with the roof of the stall lowered closer to the ground.

The contestants seem to be having fun, but watching this holiday-themed dance-off along with the audience is almost too embarrassing to take, and even knowing the outcome doesn’t stop us from closing our eyes through the awkward moments. Just be thankful it wasn’t your friend or family up on that stage.