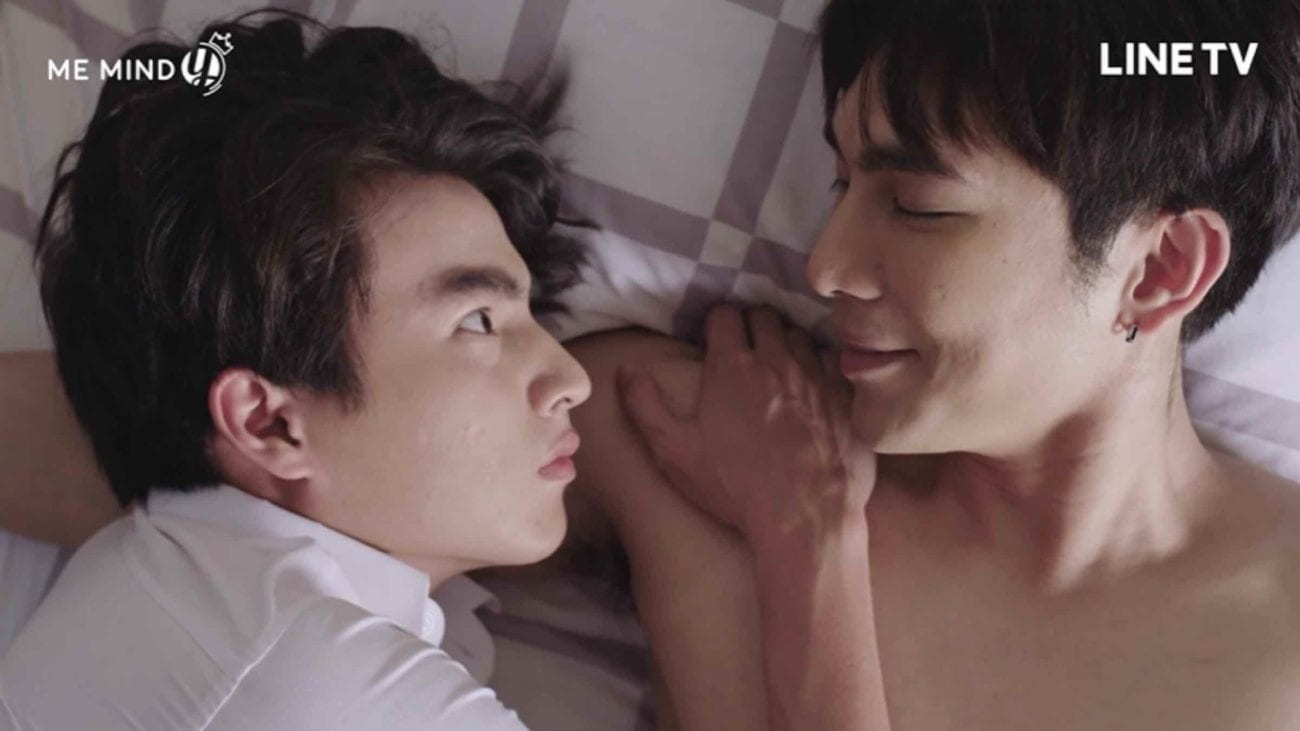 All the best ‘TharnType’ memes *ever*

We are madly in love with TharnType: The Series. The Thai BL drama is totally addictive, and the two leads have become obsession-worthy. Type (Gulf Kanawut Traipipattanapong) is a seriously homophobic sports major who dorms with Tharn (Mew Suppasit Jongcheveevat). Tharn is wealthy, privileged, and openly gay. The two embody the enemies-to-friends story arc in a truly captivating way.

As the fandom for the show grows, the online presence also increases. We all know what that means… an onslaught of memes! Hitting up all the big themes and inside jokes of the show, TharnType: The Series has some seriously fantastic memes. Scroll on & enjoy the laughs. 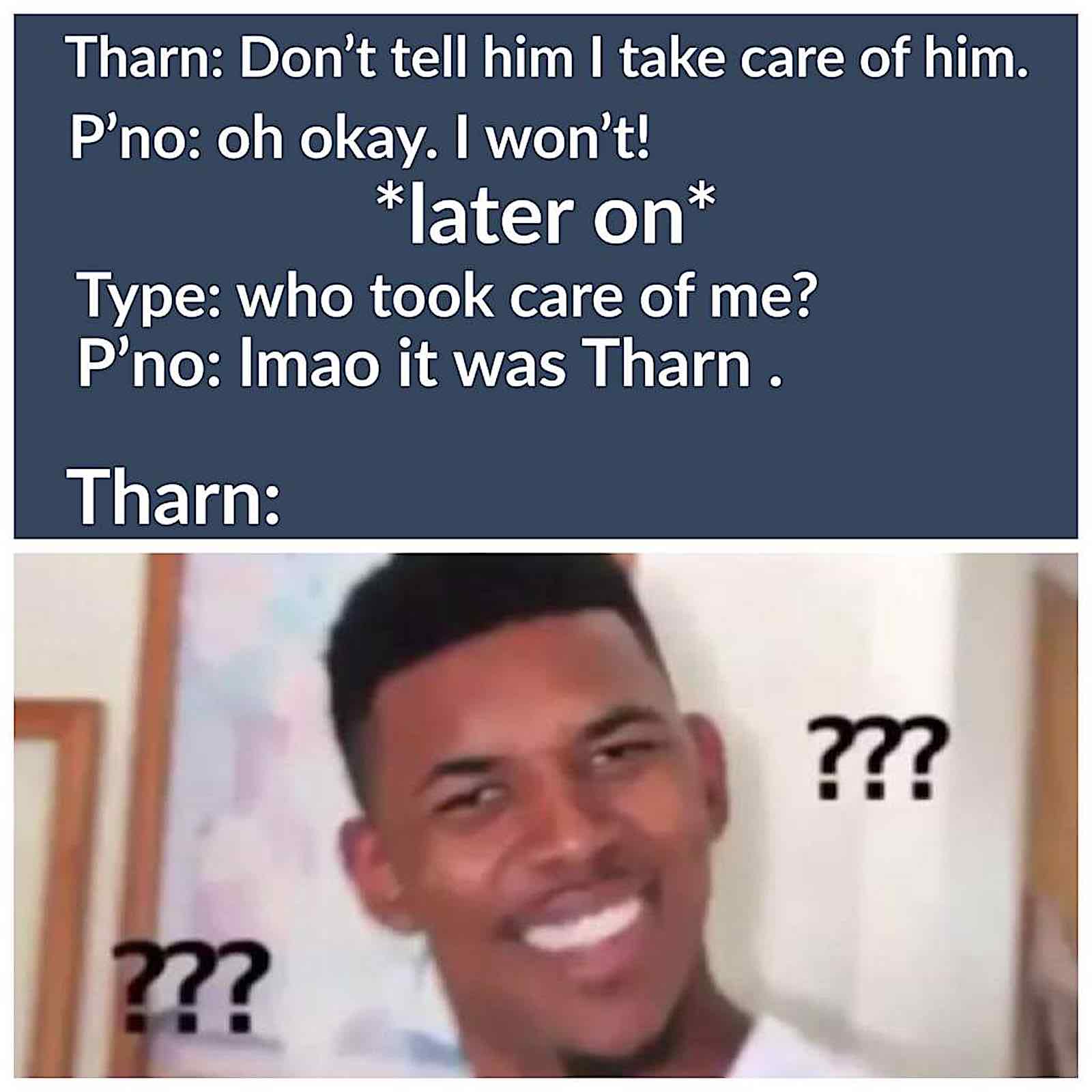 Type’s best friend, Techno (Mild Suttinut Uengtraku), also called P’No, is charming in his own way. In fact, we dare say he’s everyone’s favorite supporting role in this series. Utterly adorable, and such a guy, he definitely has his clueless moments. We can’t get enough P’No, or his memes. 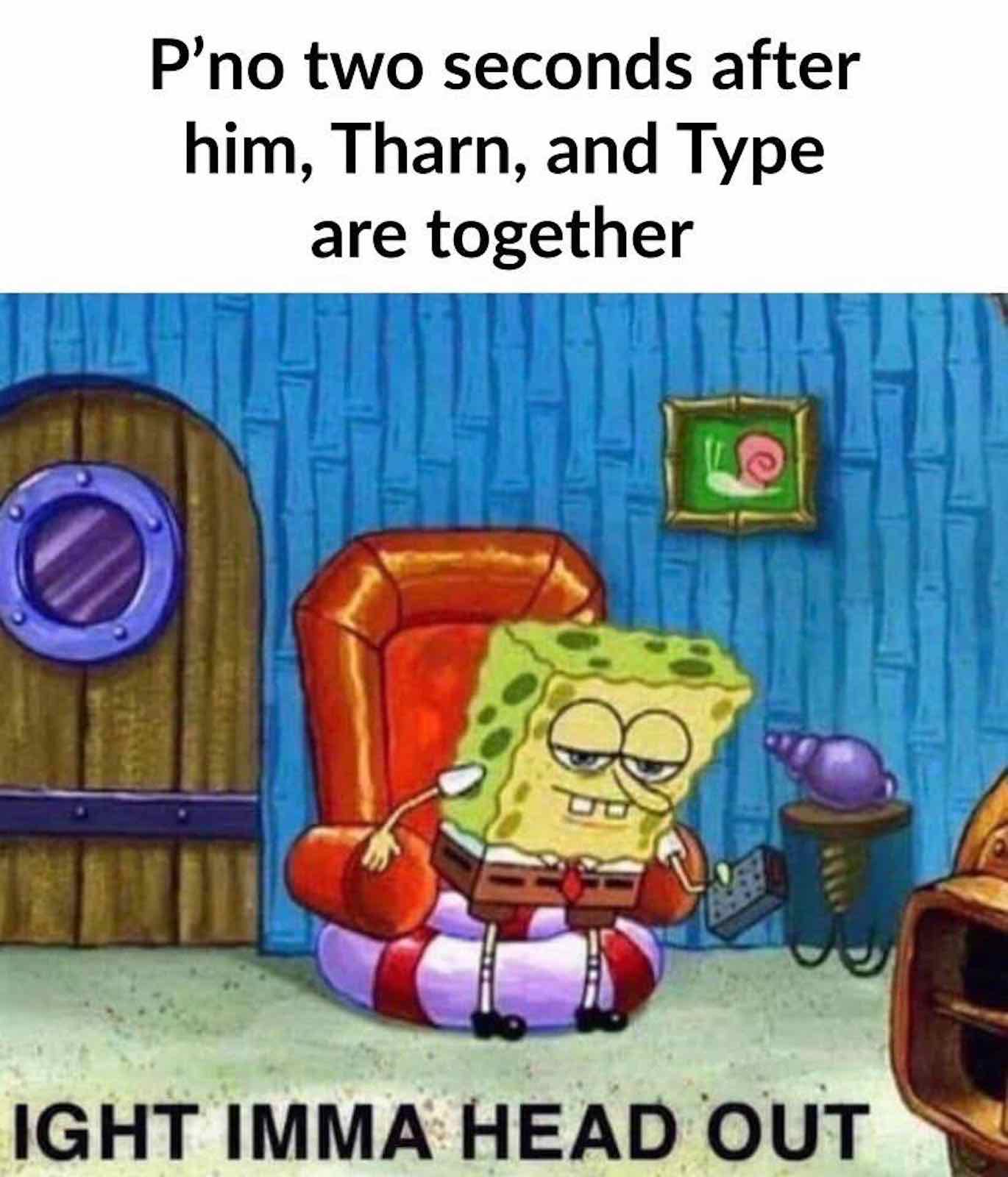 It’s the absolute best when P’no starts to pick up on the serious vibing that Tharn and Type begin having. He becomes a TharnType FBI sleuth, always sticking his nose right in the middle of their business.

Of course, we all know that P’No winds up sleeping on TharnType’s couch one night and ends up getting a front-row seat to the TharnType love show. 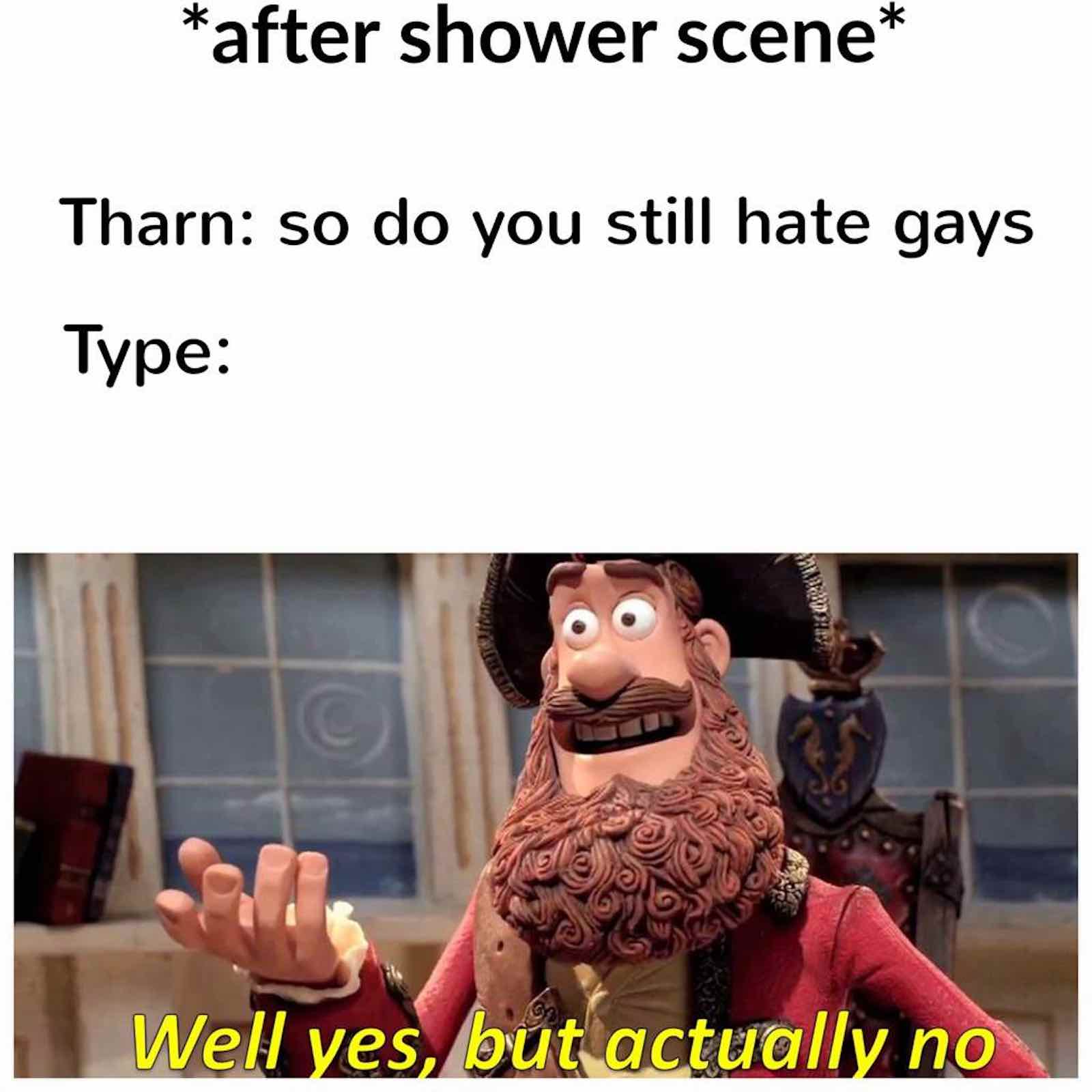 So many homophobia jokes

Tharn’s pursuit of his homophobic roommate is oddly hilarious. Why in the world would he be so determined to convert the one person who seems the most resistant? It obviously pays off, but not without some serious drama.

Type’s inner conflict in the first half of the series is fraught with tragedy and is often difficult to watch. Honestly, we have no idea how Tharn fell for that kid in the first place. However, seriousness aside, this dichotomy did lend itself to much hilarity online. The pair became the subject of much satirical levity often.

We’re so grateful that Type’s relationship with Tharn allows him to overcome some of his trauma & eventually, his own internalized homophobia. We are especially grateful that it lead to the creation of gems like this one. 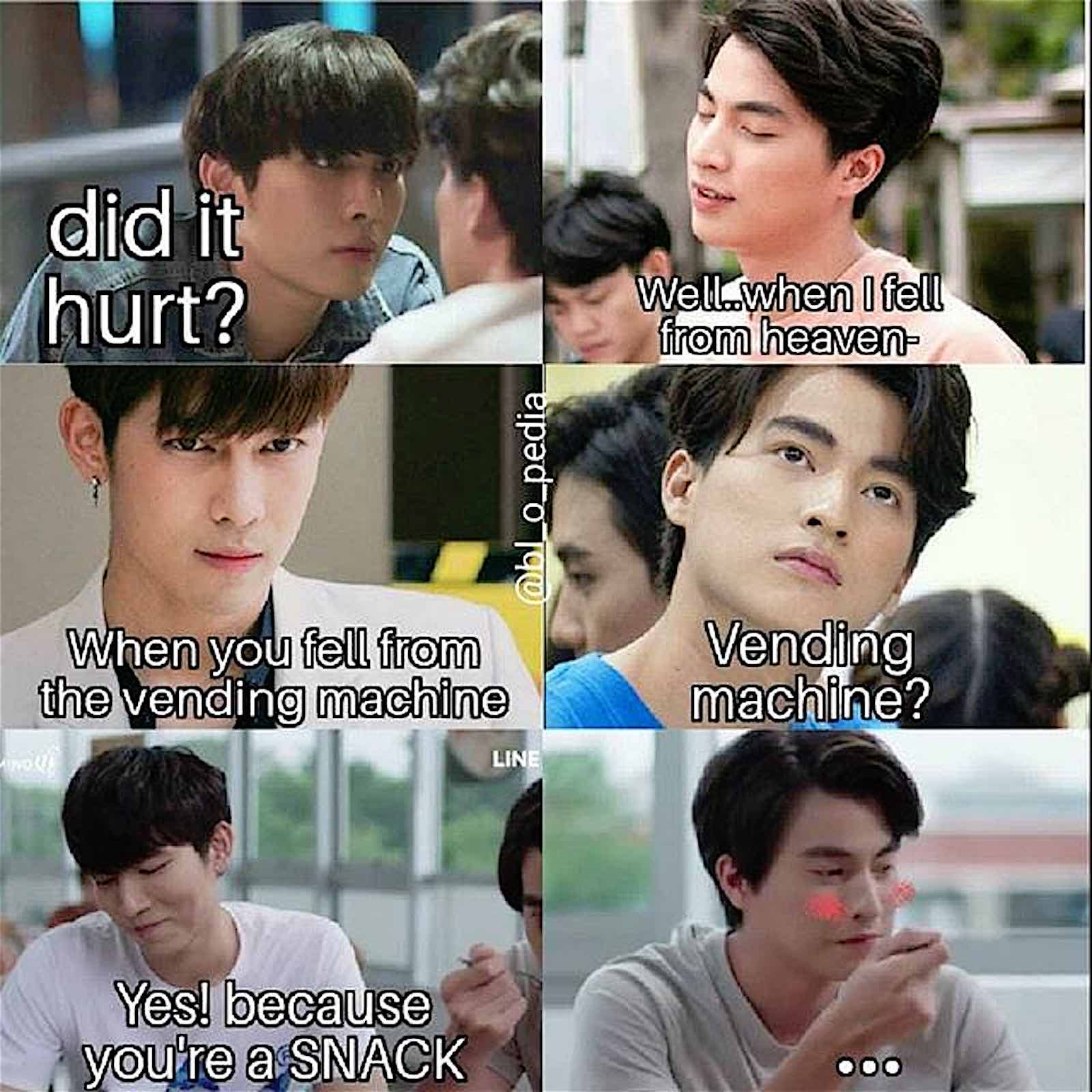 The very best in pickup lines

The TharnType pickup lines that have emerged from the TharnType: The Series memes are truly the very best. We grabbed just a couple of our favorites that kept us both laughing and begging for S2 to come quickly! 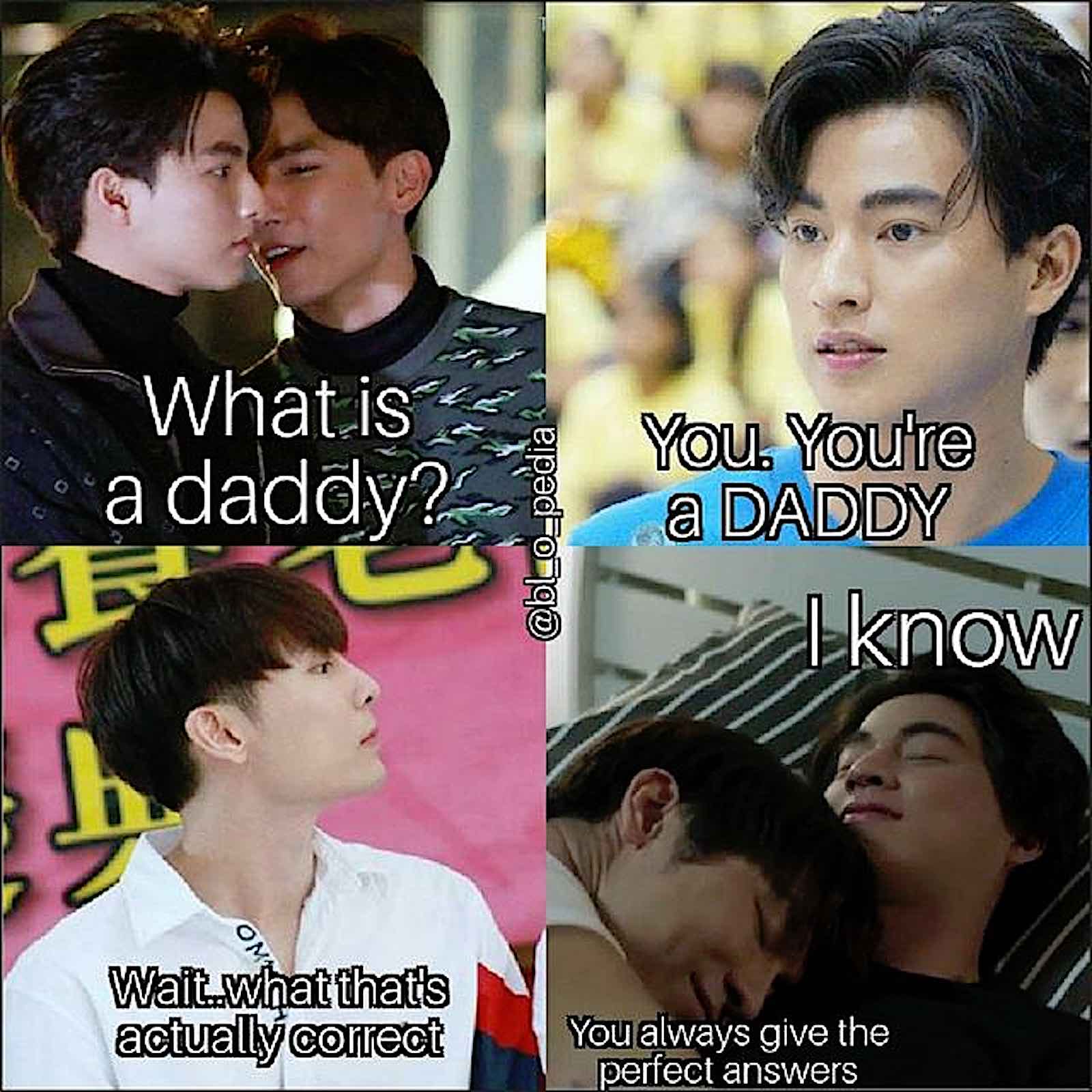 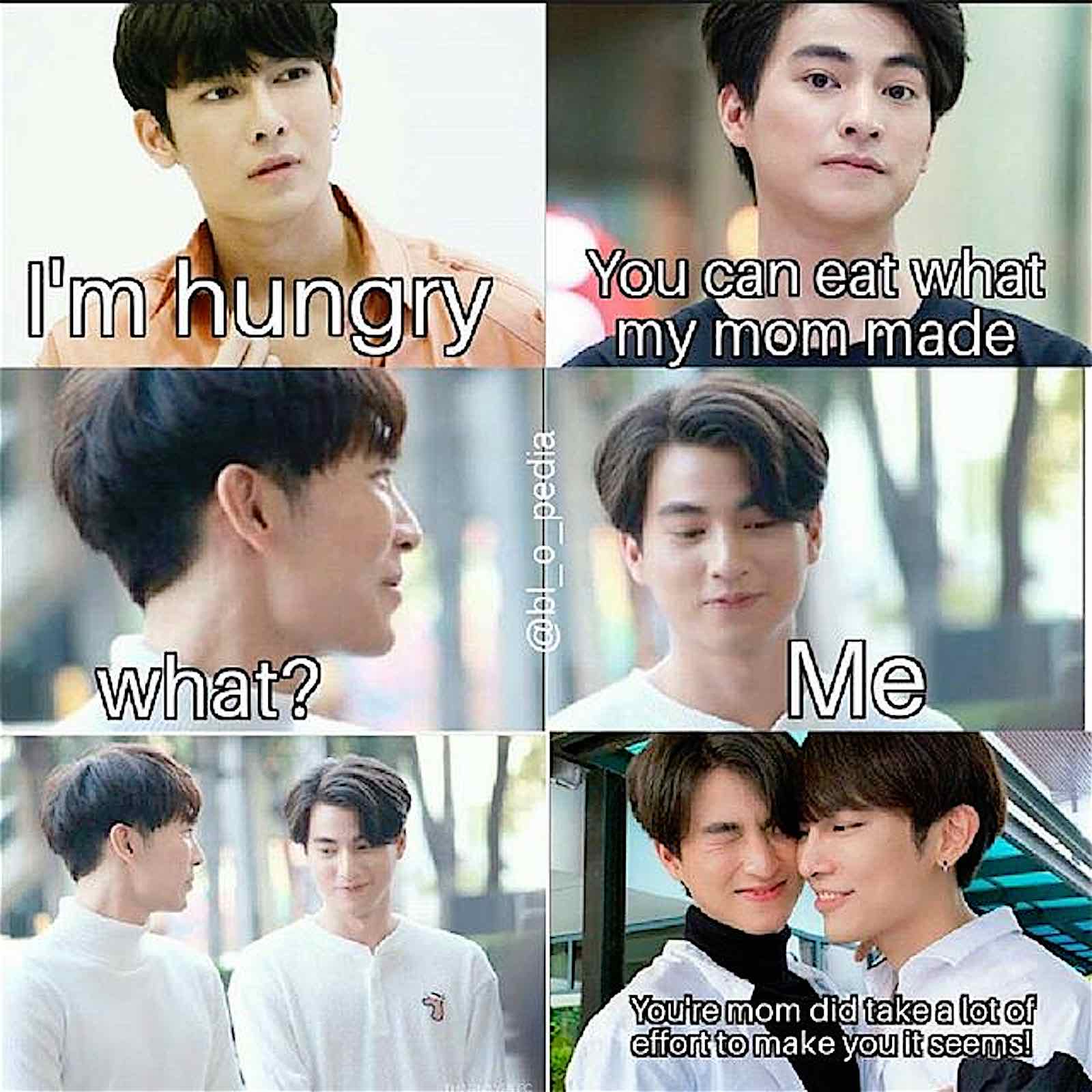 For true fans only

Only the biggest TharnType fans will be privy to these memes. As we all know, there were a lot of tears at the end of TharnType S1, and not just because the season was wrapping up. Those tears hit the international fandom when the Special Episode was released in Thailand cinemas & international fans couldn’t access it.

Inter-fans took to twitter, attempting to follow any breadcrumbs they could decipher from fans that were fortunate enough to attend the screening in Thailand. They lamented together, very loudly. So loudly, in fact, that the creators of the show heard their cries and ended up releasing the Special Episode for purchase through Vimeo. 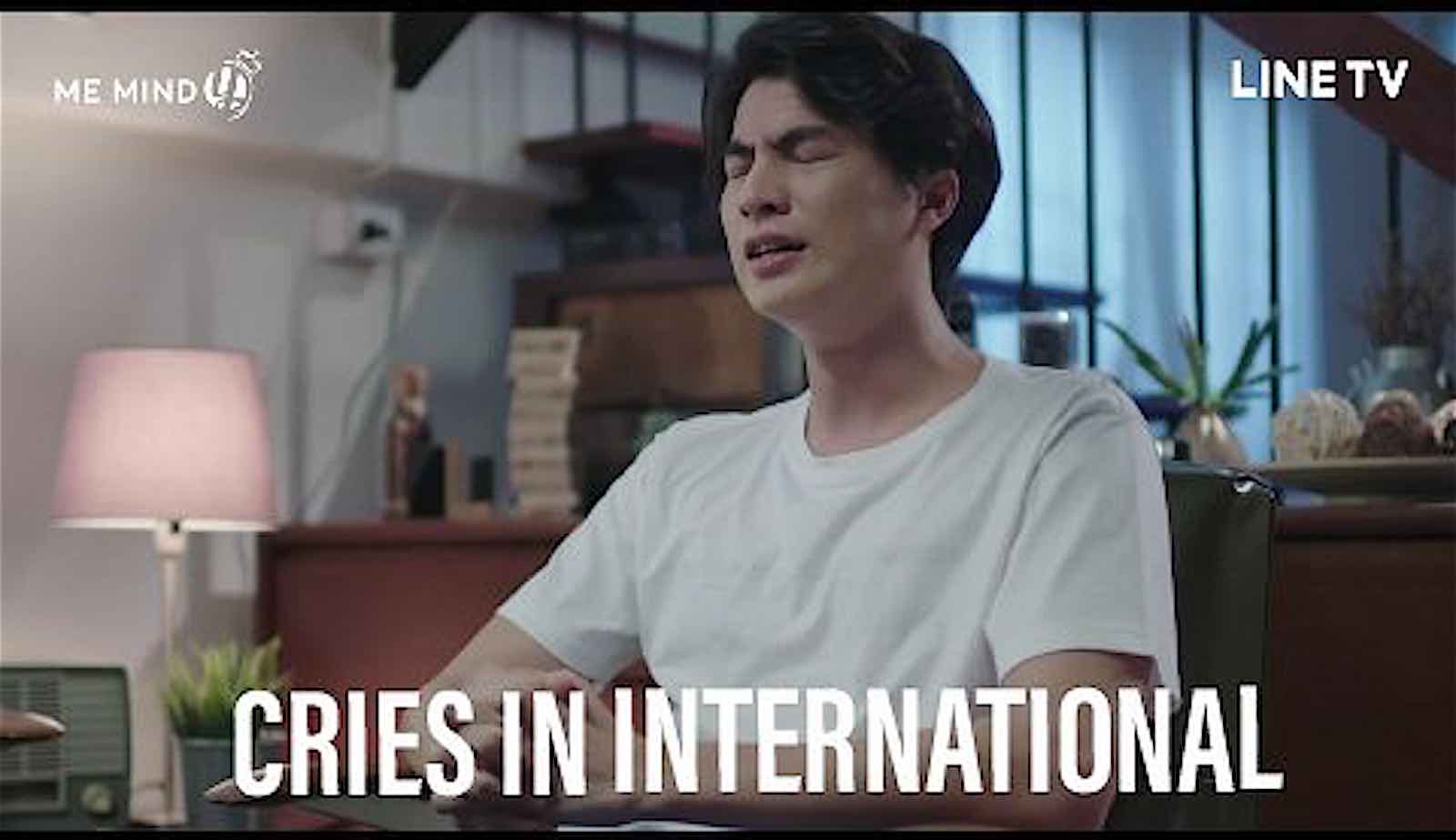 This particular meme appears in the fandom often now, when inter-fans have to wait for access to the content they so desperately crave. Will the interview MewGulf just did be subbed in English, or won’t it? We are crying in international over here! 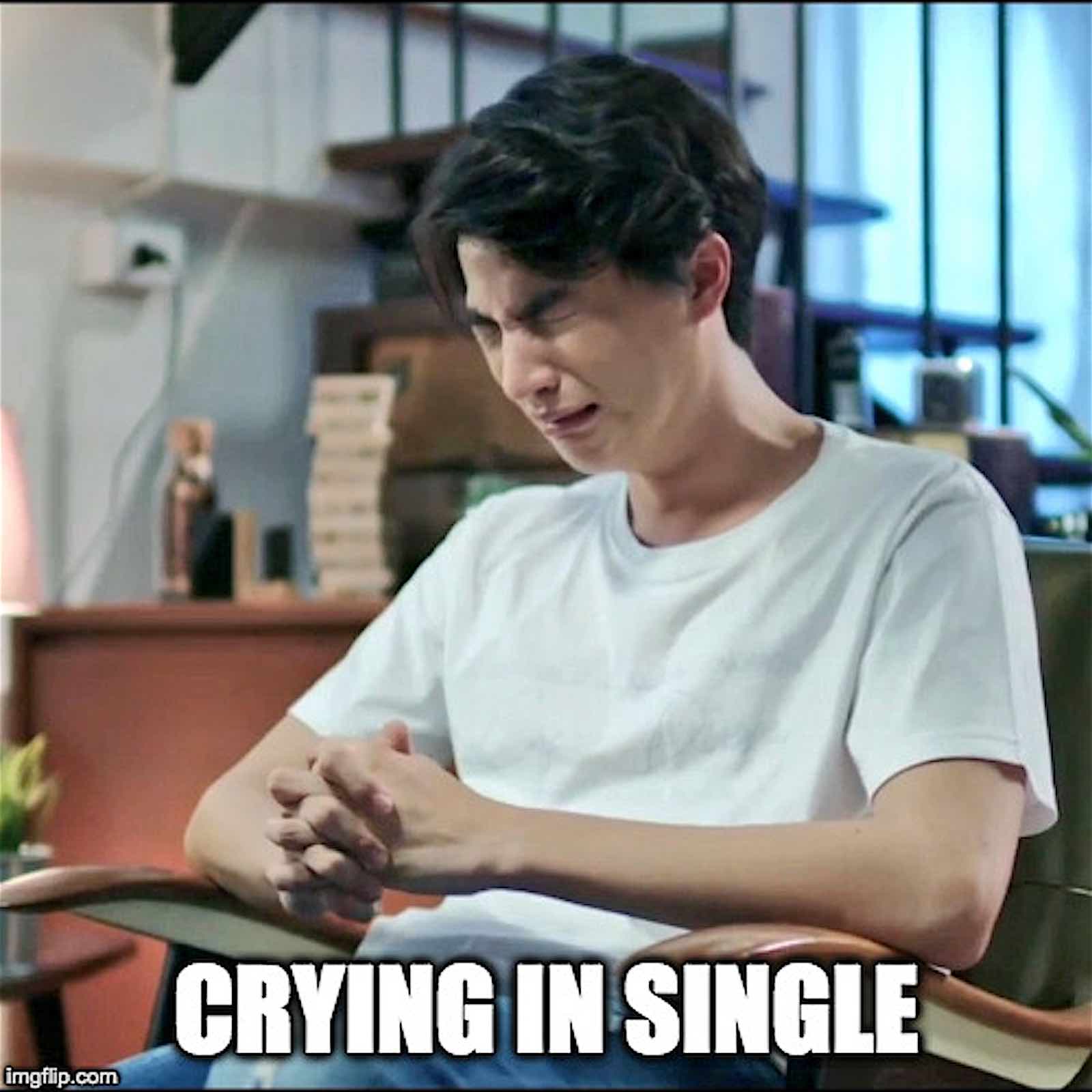 As MewGulf parade themselves all Thailand attending fanservice events, fans have become truly enamored with their connection. Is it love, are they friends? Maybe they’re just brothers? Who knows! What we do know is that the joy & elation they keep spilling everywhere is making the rest of us feel very, very single. We’re crying in single over here, guys! Thanks for that! 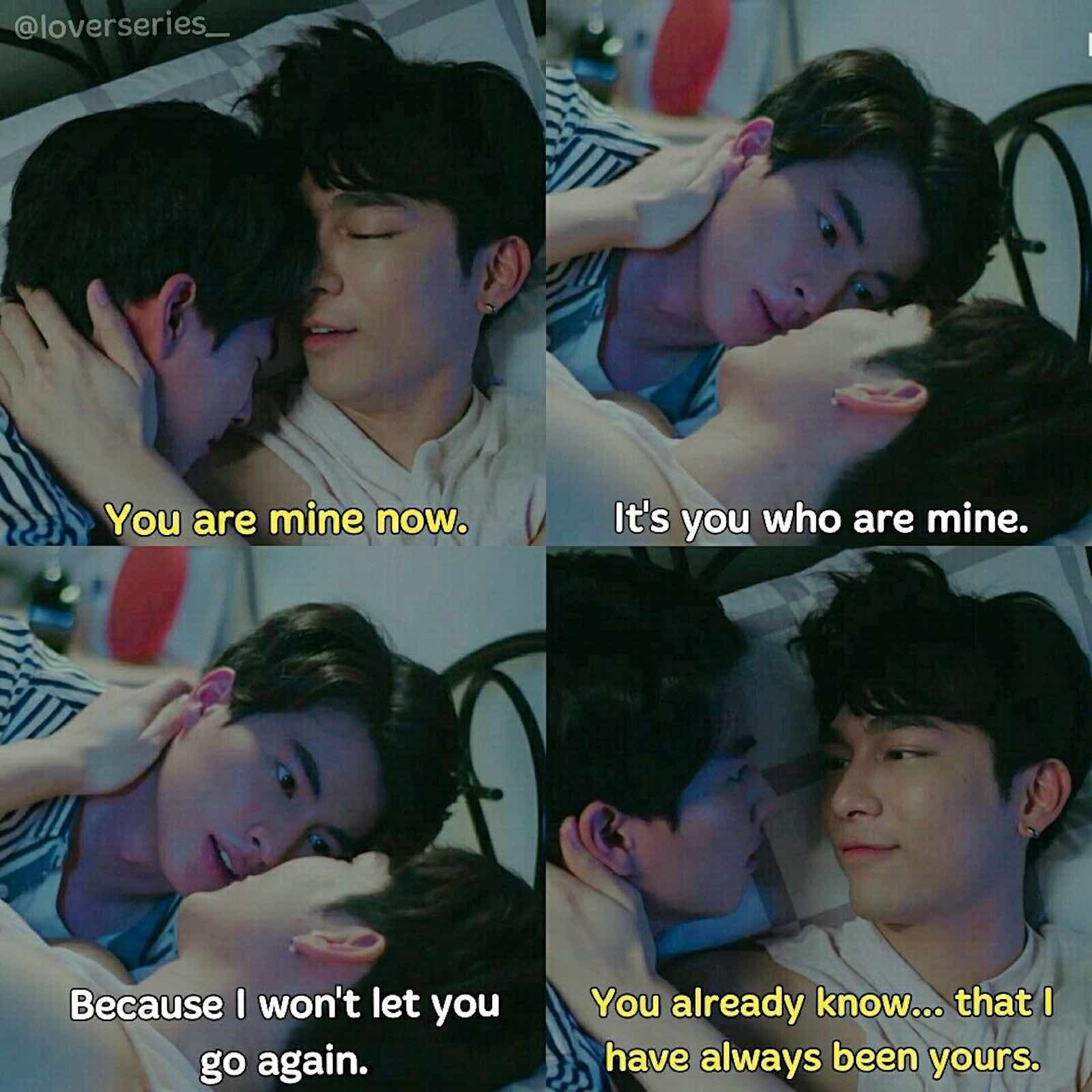 One sappy meme for the road

We couldn’t sign off without having at least one sappy love meme included in our round-up. Come on, TharnType: The Series we need season 2 now!

Signup for our newsletter and make sure you never miss another story about your fandom fave. We’ll email you once a week with only the most relevant stories. Signup now!