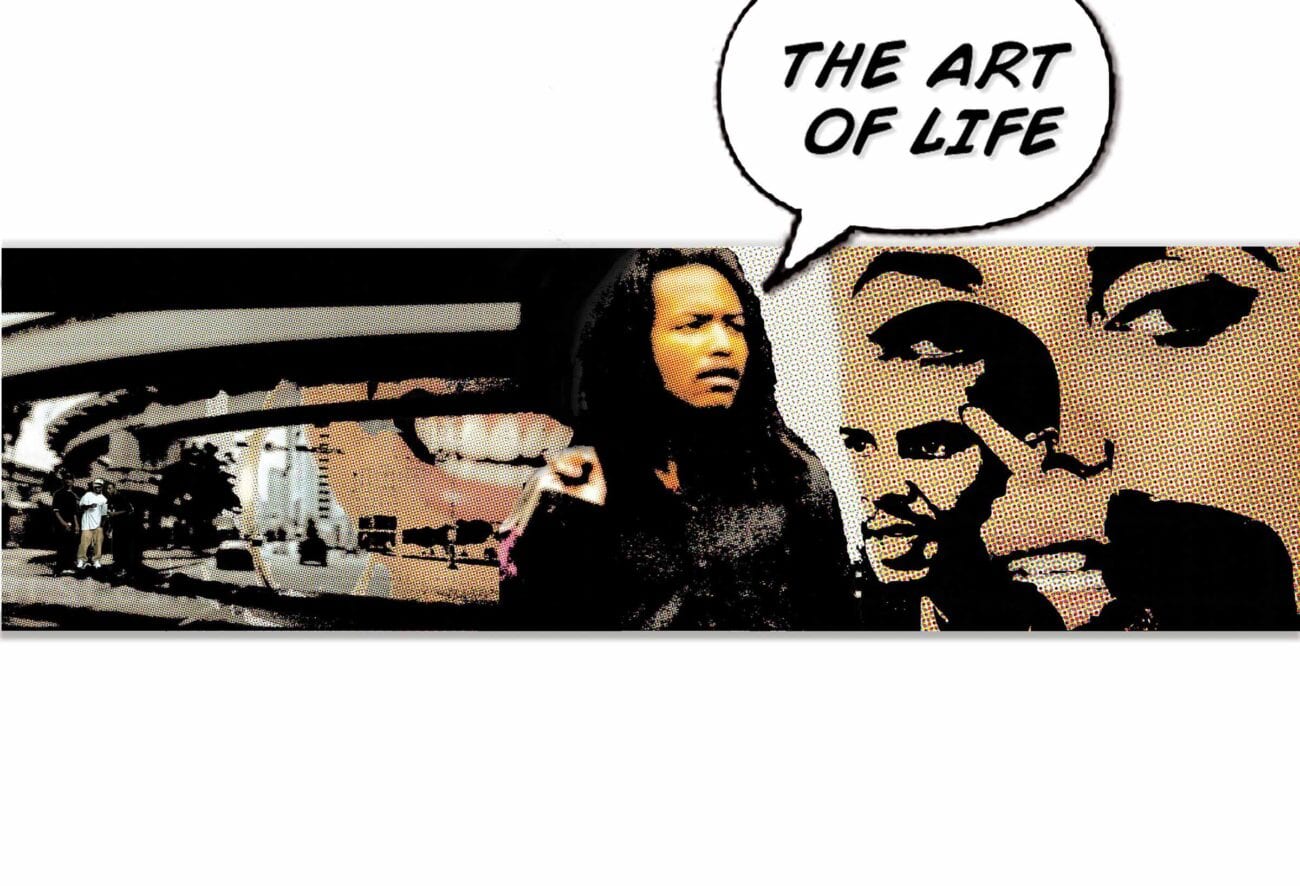 Exploring the ‘Art of Life’ with indie filmmaker Kyle Holbrook

Life imitates art for a reason. Life is art, and art reflects that. But the more important thing is that art is an escape. If you’re struggling, in an unsafe situation, or just are suffering thanks to things outside of your control, art is the perfect way to take control of something.

Muralist and indie filmmaker Kyle Holbrook learned this early on, as he was dealing with gang violence in secondary and high school. But rather than give in, he stood strong against it thanks to art, and ended up creating the non-profit Moving the Lives of Kids Mural Project to give other urban communities an escape through art.

But he isn’t just focusing on visual art to make his mark on the world. Holbrook is also an indie film director, best known for the initial 2013 release of Art of Life, that’s getting a resurgence in 2020. His philosophy motivated the creation of the film, in the idea that youth living in the hood need a path for survival as they’re very rarely given one. We spoke with Holbrook about his journey into filmmaking and what his film meant to him. 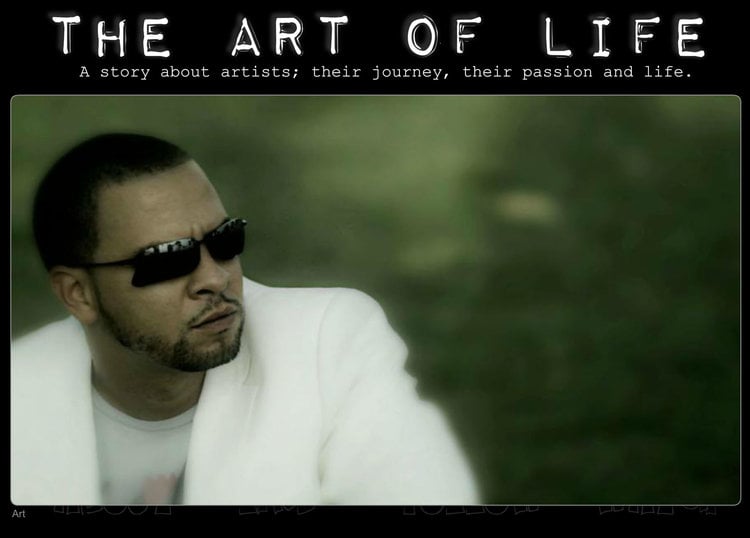 Where did your journey into filmmaking begin?

My journey as a filmmaker I think started when I was a small kid playing with my favorite toys, G.I. Joe’s. I had storylines, back stories, dialogue, deep conversations…each one of my figures have a personality. I remember when my cousin Came over to play we were like brothers  but we usually wrestled and played sports. Playing with my G.I. Joe’s was always solitary. My cousins came over one time and set up all the G.I. Joe’s and then through socks at them.

I thought that was the worst thing, no dialogue there was nothing, just threw socks at them. I got my first video camera first semester at Art Institute University in Pittsburgh . I fell in love with it right away recording interviewing family and friends. I really loved to try and capture some life moments instead of being rehearsed or staged. I would often just start recording from different angles or without some of my friends knowledge, which can be kind of tricky Recording gang members doing somewhat illegal activities, haha.

I began writing and shooting short films throughout college. On a wide variety of topics. I entered a short film in our schools film festival intrigued by the audiences reactions. 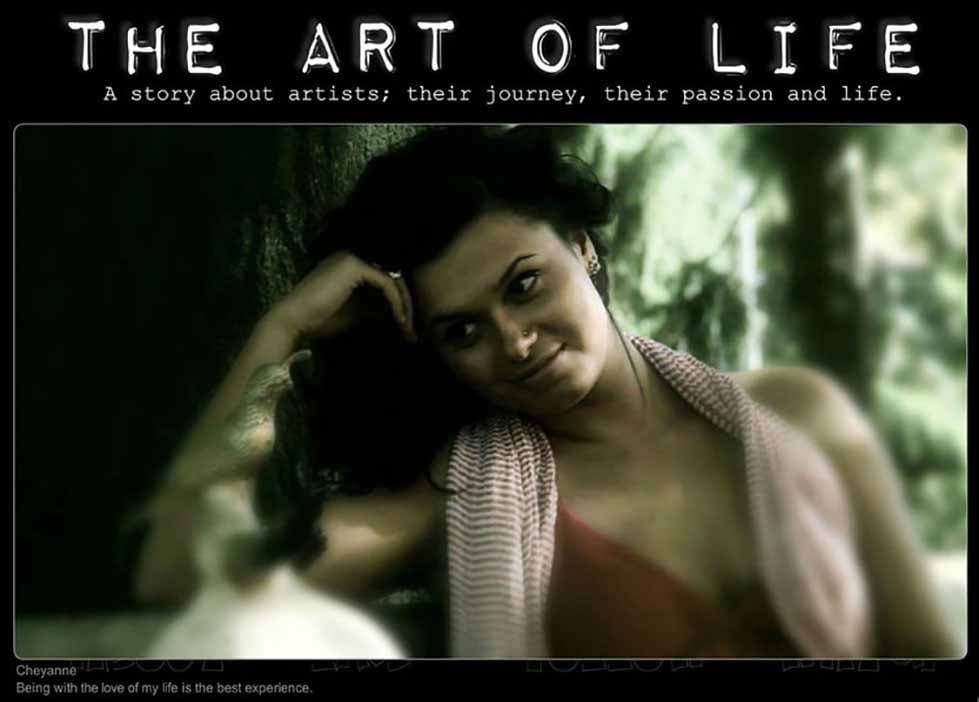 What inspired you to pursue film? Any particular films make you want to create movies?

My earliest influence of film was my father, William Charles Holbrook. He collected film books that were basically an encyclopedia of all the films that came out that year. My dad had a enormous library of VHS tapes that expose me to films on a different time periods long before I was born.

I think being exposed to films in the history of films at such a young age was an advantage and influences my writing screen plays today. ‘One flew over the cuckoo‘s nest’, ‘Adventures of Buckaroo Banzai Across the 8th Dimension’ , ‘Butch Cassidy and the Sundance Kid’,  ‘Lone Wolf McQuade‘ and ‘Enter the Dragon’ are some of the films I remember.

My career before film as an artist coincides with my career in film. I started at 19 years old when I discovered I had a daughter on the way, designing logos T-shirts I would do Caricatures jobs for various events especially bar mitzvahs and art festivals. Then I began painting murals for private residents, small companies, and schools. I got my first large commission at a Simon mall in Pittsburgh. Each and every mural or arts festival I did I would also do short films about. 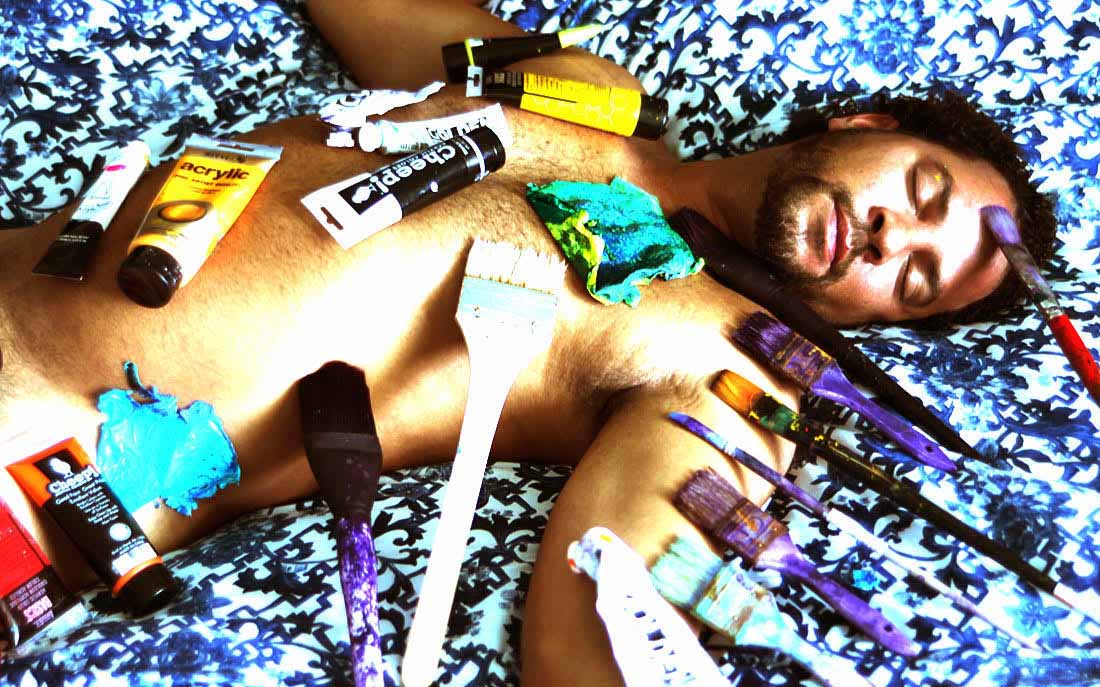 Word of mouth and media appearances on television and newspaper made me more more popular as a mural artist. I started a nonprofit in 2002 at 24 years old. My arts organization Moving Lives of Kids or better known as MLK mural (MLKmural.com) started to really grow and get increasing support from the foundation and corporate community. I’ve painted murals in 43 countries and 27 states receiving $18 million in funding that has employed nearly 7000 Youth and Artist around the world.

I am proud that through Public art I was able to draw attention to important social issues like “stop  gun violence”, “domestic violence“, “Inclusion” or to get people to vote ,protecting the environment and endangered species.

My creative process is multifaceted and ongoing basically 24 hours a day. I draw inspiration from life experiences as well as dreams. I enjoy writing in solitude very quiet so I can hear my thoughts. I prefer filming collaboratively organic allowing for ad lib  as well as creative brainstorming conversations amongst the cast and crew. 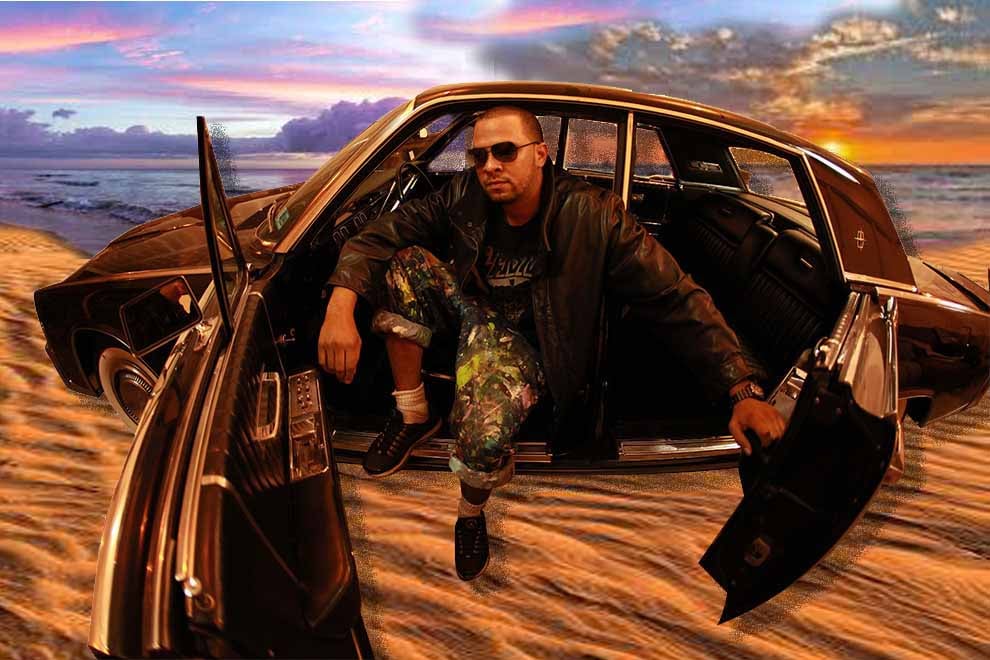 Any advice you can give up and coming filmmakers?

One thing I would say to any new filmmakers is to follow through complete projects that you start. continue to evolve and incorporate your growth and knowledge as a human into your work. Don’t give up. I think it’s an exciting time in film there’s more outlets than ever which means more demand thus more opportunities than there’s ever been in the history of film. I think one thing  the 2020 COVID-19 quarantine has shown us is the immense power of the film medium to unite people and reach a tremendous audience.

You wore a lot of hats while making The Art of Life. What was that like?

I truly believe that the more you do and the strive to accomplish new goals the more attainable they are. Progress is achieved through action so being busy still having a design company being partners in some and other for-profit ventures, writing filming and painting all enhance the quality of each.

It’s important to step back from your work seeing it from a new set of eyes or various angles then immersing yourself in it and then stepping away for a little bit  helps you get a more holistic view of your work which transpires to a better thought out product once your project is completed. I think the busier you are the more work to get done especially if you have a good team around you. I can wear a lot of hats because I have managers and directors that run the day-to-day operations and logistical   detail so I can continue to think big picture.

What can we expect next from you?

My next project is one that I have been working on for the last couple of years it will be made for serial television.  The lead characters deal in situations  in the past present and future. I don’t want to reveal too much yet because it’s a very unique concept and idea. We Plan on shooting in the summer of 2021. 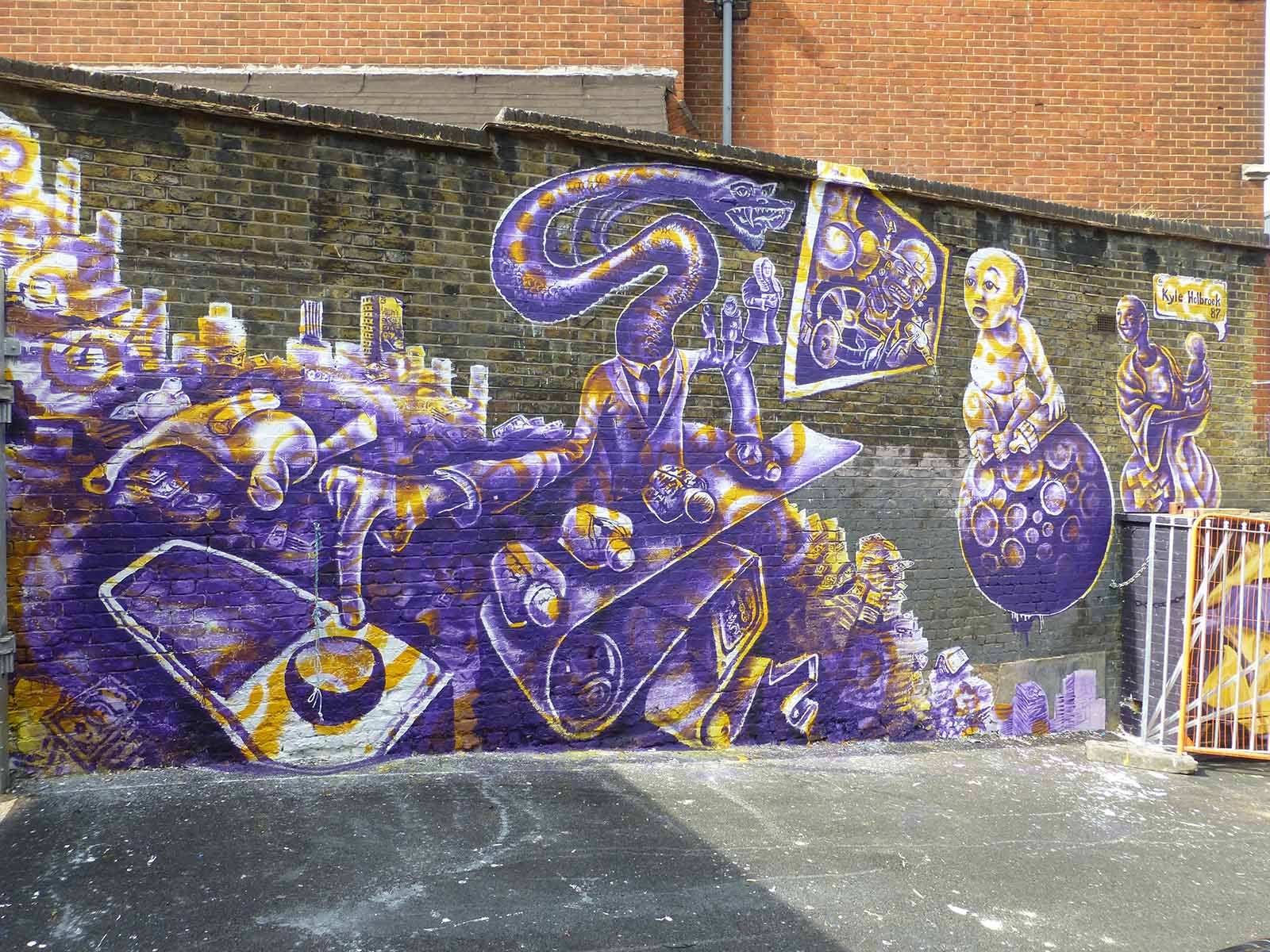 Have you worked with mentor before? What did you learn from that experience?

Mentors is something I think has to happen organically because it takes both parties; the mentor and the mentee to have some sort of relationship. For me my father died in my arms when I was 18 so Subconsciously I’ve always gravitated towards men that were much older than me as friends. I’ve been really blessed to have some really influential mentors in my life one my uncle Jay, Who was a professional soccer player another is Louis Wolfson III who founded, brought public and sold “The Video Jukebox Network” to MTV in 1998. I would like to find a mentor in film.

I want to make films that if people see them in the future it would make them aspire to be a filmmaker as well.

Can we see any episodic TV coming from you in the future?

Yes definitely in the future but my current project  will start out a little more episodic which can allow more people into the room but as the project goes on it might find itself being a little more serialized.

I plan to complete the writing of my current project and begin filming in 2021 I think it will be my best work todate. In five years I’ll be doing my first major motion picture, that’s the plan.

What movies or filmmakers should everyone have on their radar?

I love Boots Riley’s Sorry to Bother You and  I’m a fan of Eric Rodriguez‘s films, A filmmaker in Miami Florida who has won 13 Emmys.

13) My favorite film of all time this is the toughest question it’s almost impossible to answer so many great motion pictures….but if I got to pick one it would be True Romance. It was written by Tarantino, has an amazing cast including Dennis Hopper, Brad Pitt, James Gandolfini, Christopher Walken, Christian Slater, Michael Rappaport, Gary Oldman, Patricia Arquette, Val Kilmer, Chris Penn, Samuel Jackson, and Tom Sizemore.

I Learn from it Is that it’s OK to show visual manifestations in the form of a person of characters thoughts and emotions. The muse played by Vanessa German in my newly released film ‘Art of Life’ Was partially inspired by the Elvis character in ‘True Romance’. The muse interacts with Cheyenne (Joy Taylor from the Collin cowherd show) Reciting Poems who’s words reflect the thoughts of the character almost like a higher a power.

In The Art of Life here’s a newly released Mac Miller song and video as well as animation and several different characters from various walks of life also very similar to Tarantino‘s screenplay.