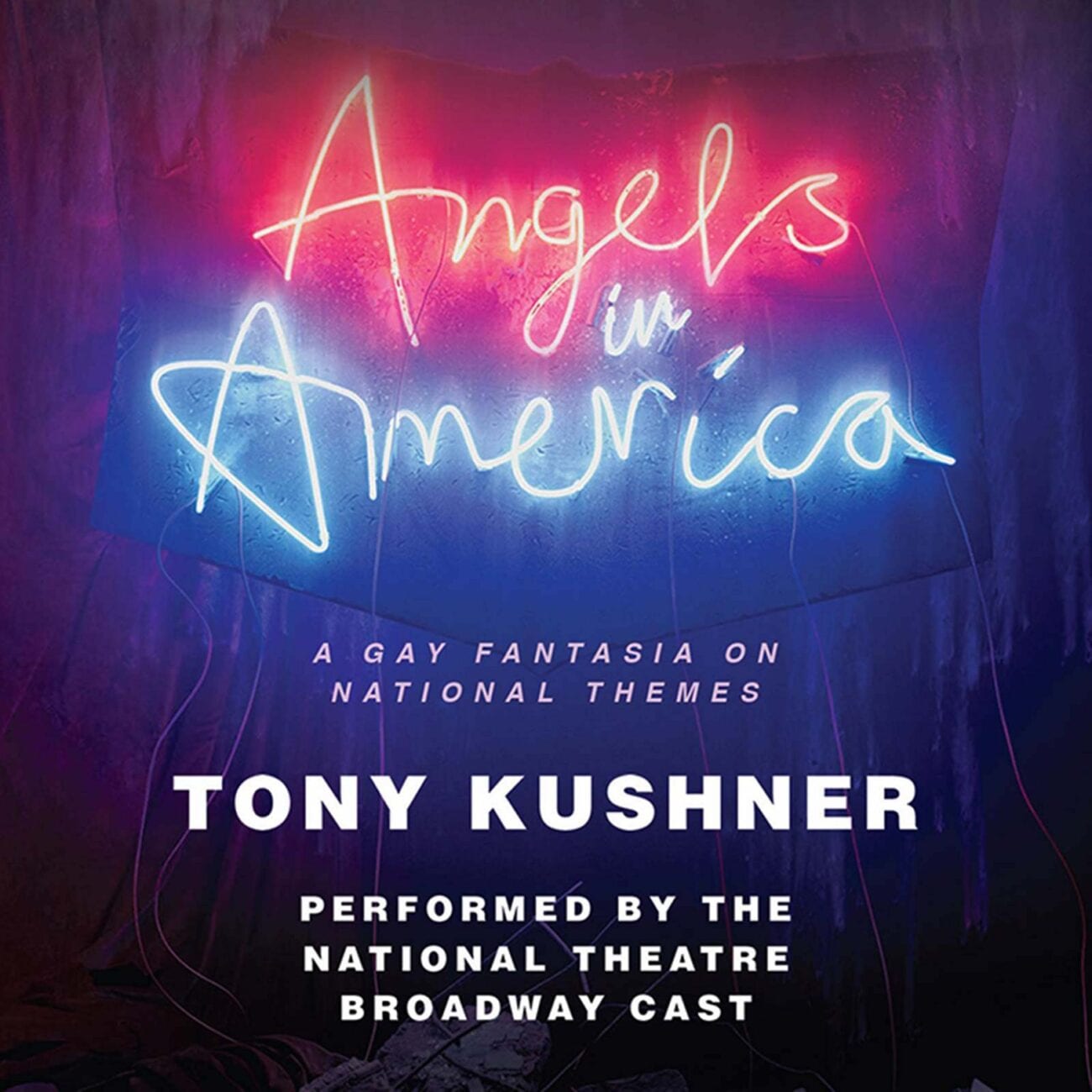 Pride Month: A beginners guide to the play ‘Angels in America’

It’s impossible to talk LGBTQ+ stories on Broadway without discussing Angels in America. The long-running play, first debuting on the Great White Way in 1993, has made a name for itself with the story told for the past 25+ years.

With an HBO miniseries, a 2018 Tony award-winning revival, and even an opera, Angels in America has been adapted again and again for new audiences to discover the story of the AIDS crisis in America during the 80’s. With its two parts, Millennium Approaches and Perestroika, it’s very much a play about its performances. 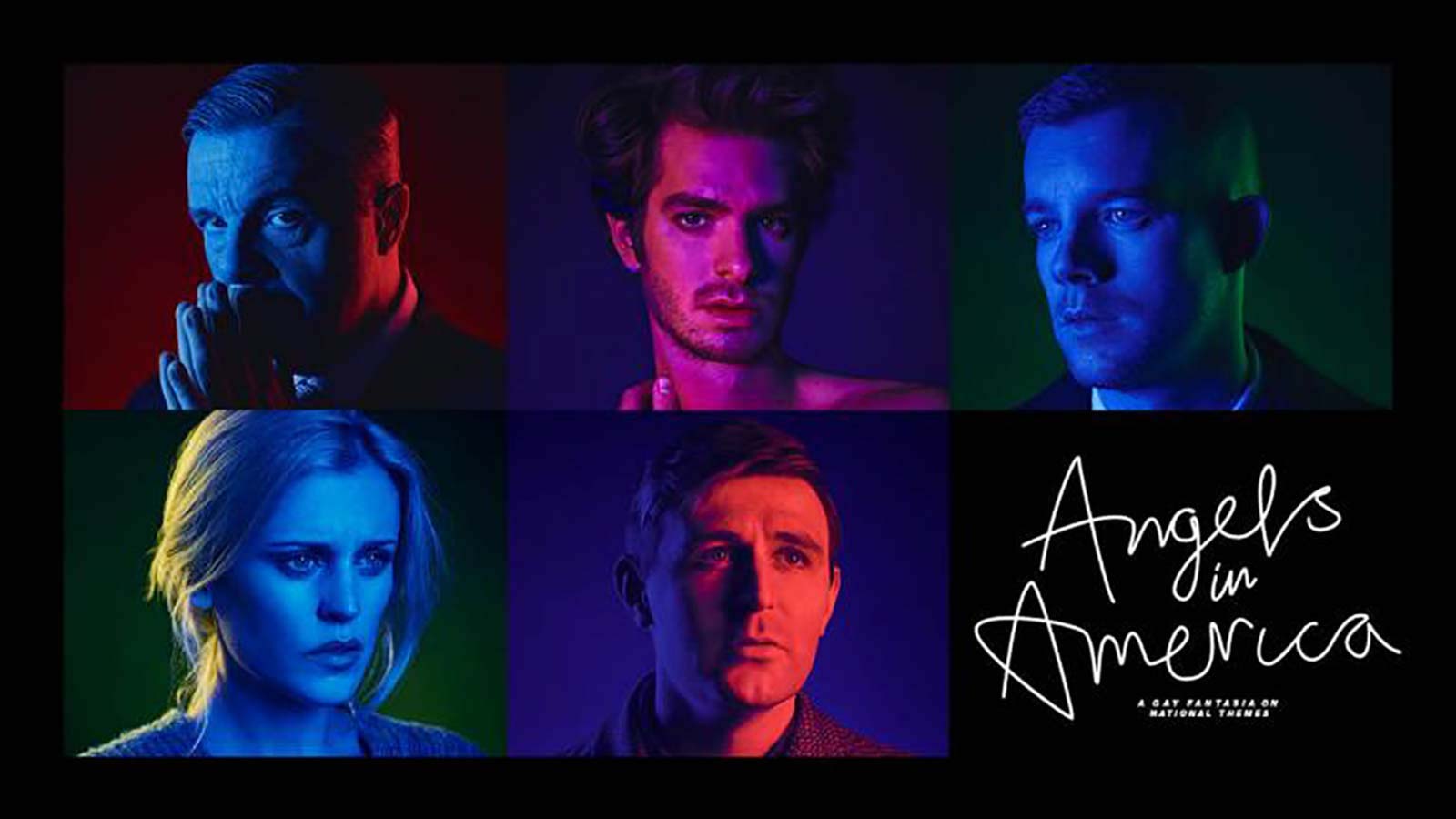 But it’s also a lot for someone who knows nothing but the name of the play. While they don’t usually run together, the total length of the play back to back would be 7.5 hours. For what it is though, it’s one of the most honest and raw portrayals of the AIDS crisis in media history.

Angels in America is 100% worth your time, but we know that’s also a large time commitment. If you’re interested in diving into the play, but want a little more context before you go for the ride, here’s a beginner’s guide to the play itself. 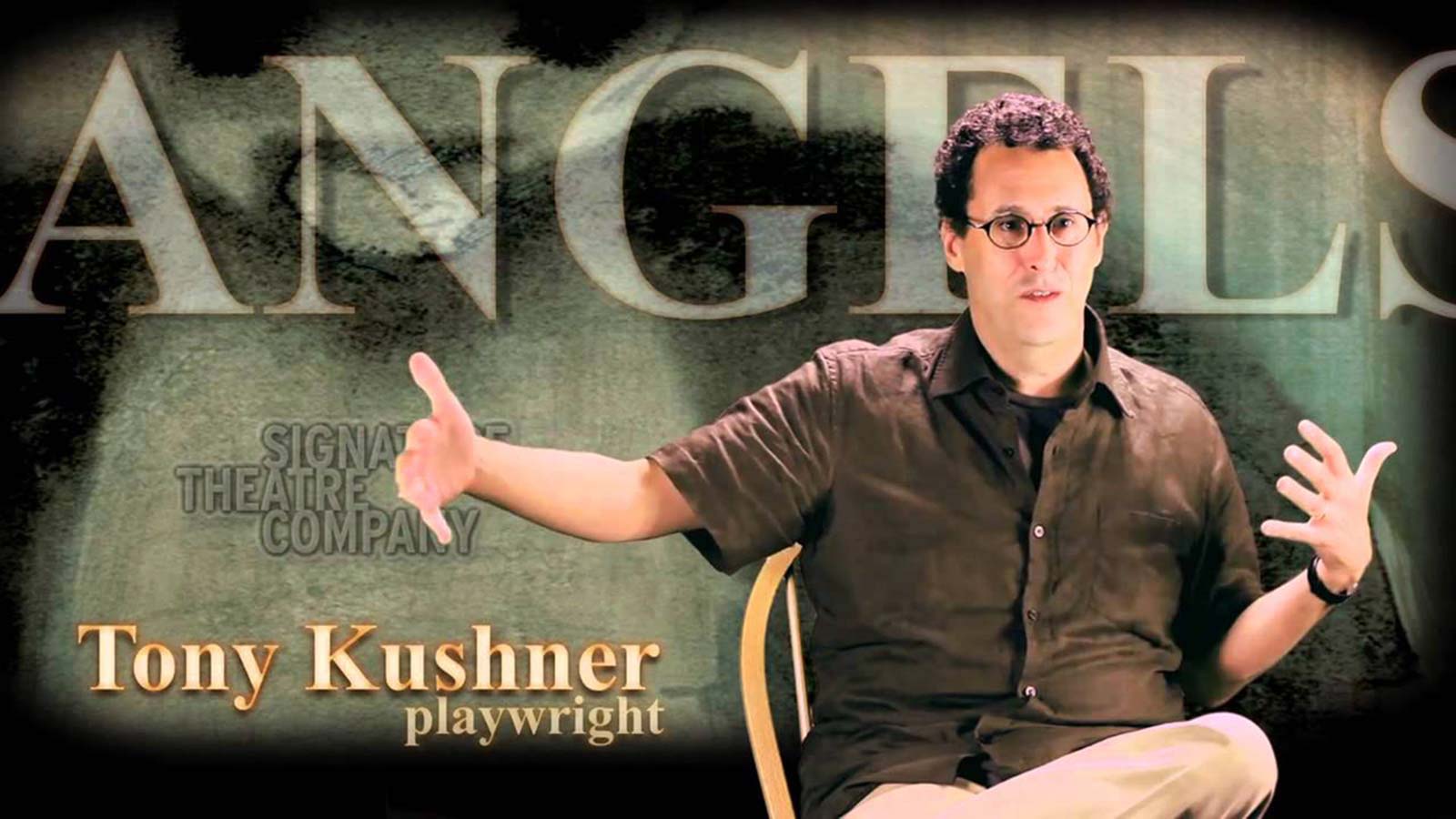 Tony Kushner: the mad genius behind the pen

It shouldn’t come as a surprise, but Kushner was inspired by The Normal Heart and the story Larry Kramer’s play was telling. Working with Eureka Theater dramaturg Oskar Eustis, he helped Kushner get his early work A Bright Room Called Day in the theater. Then the two fought to get The Normal Heart in the Eureka, and failed.

So in petty gay man fashion, they wrote their own AIDS play. But unlike most spiteful ideas that fizzle out, Kushner actually stuck with it, and wrote what would become Millennium Approaches. Since he was on the ground in San Francisco during the crisis, he saw first hand what was happening with the crisis and how the government was ignoring their people.

His initial pitch for the play? It’s about AIDS, Roy Cohn, and Mormons. Written for eight actors, the play has many double castings, where actors play multiple characters and even some of the opposite gender. It’s very much a gay fantasia. 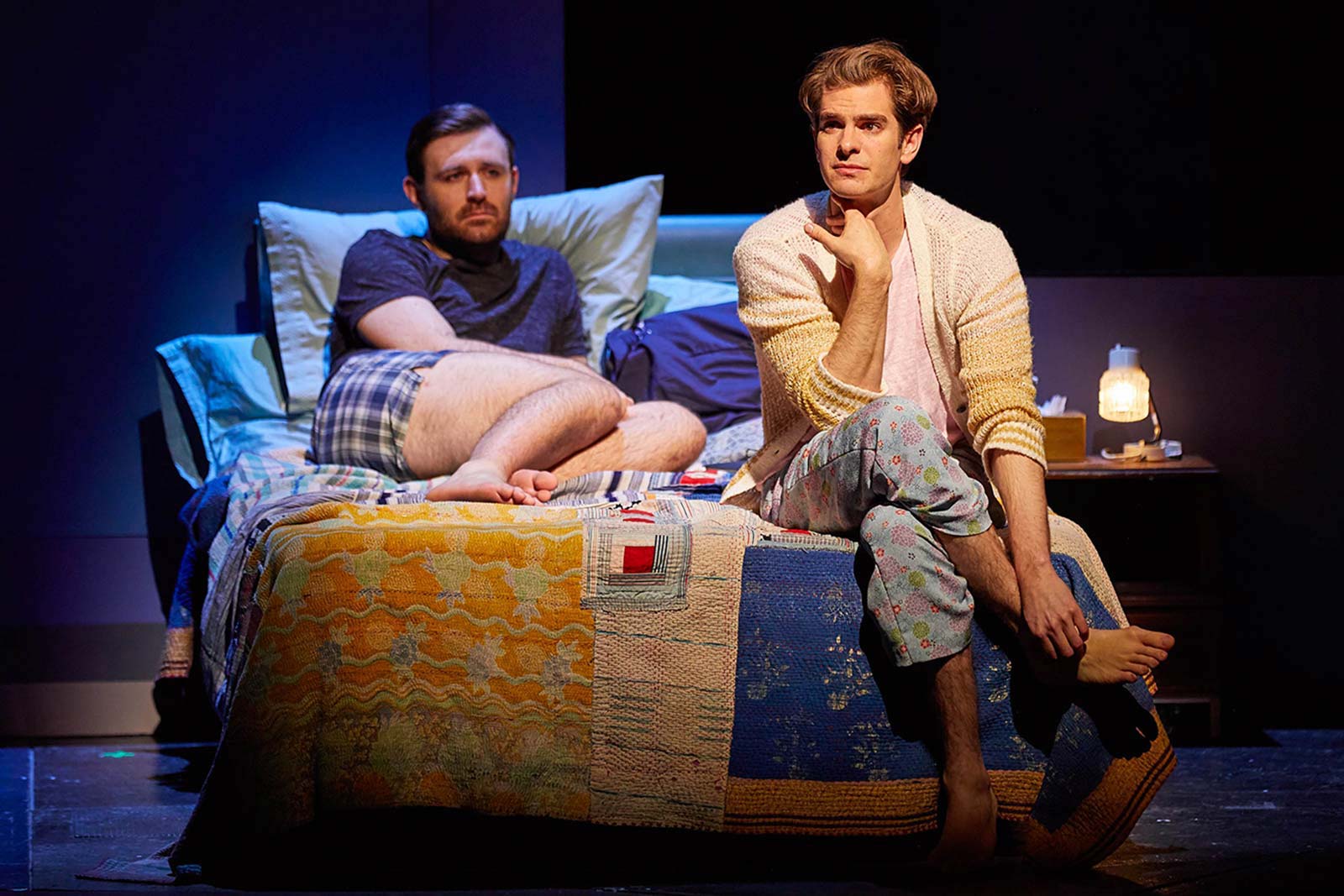 Millennium Approaches: the beginnings of a tragedy

The story being told across Angels in America is focused on a gay couple in NYC, Prior and Louis. At Louis’ grandmother’s funeral, he finds out his lover Prior has finally been diagnosed with AIDS. At first, he’s supportive, but when Prior goes downhill, Louis leaves him, and Prior only has his friend Belize to rely on.

Of course, Belize is also serving as Louis’ emotional crutch as he deals with the guilt of leaving Prior while he’s as weak and sick as he is. As Prior’s condition worsens, he begins to hear voices from ghosts, including two who claim to be his ancestors informing him he’s a prophet. Though, he cannot tell if he’s crazy or if it’s real.

Meanwhile, at the same office Louis works at, Joe Pitt is getting promoted thanks to his mentor Roy Cohn, but he is hesitant thanks to his wife Harper who is valium-addicted, and most likely not in love with him anymore. When he finally comes out to her, it confirms his fear and sends her even further into her drug addiction. 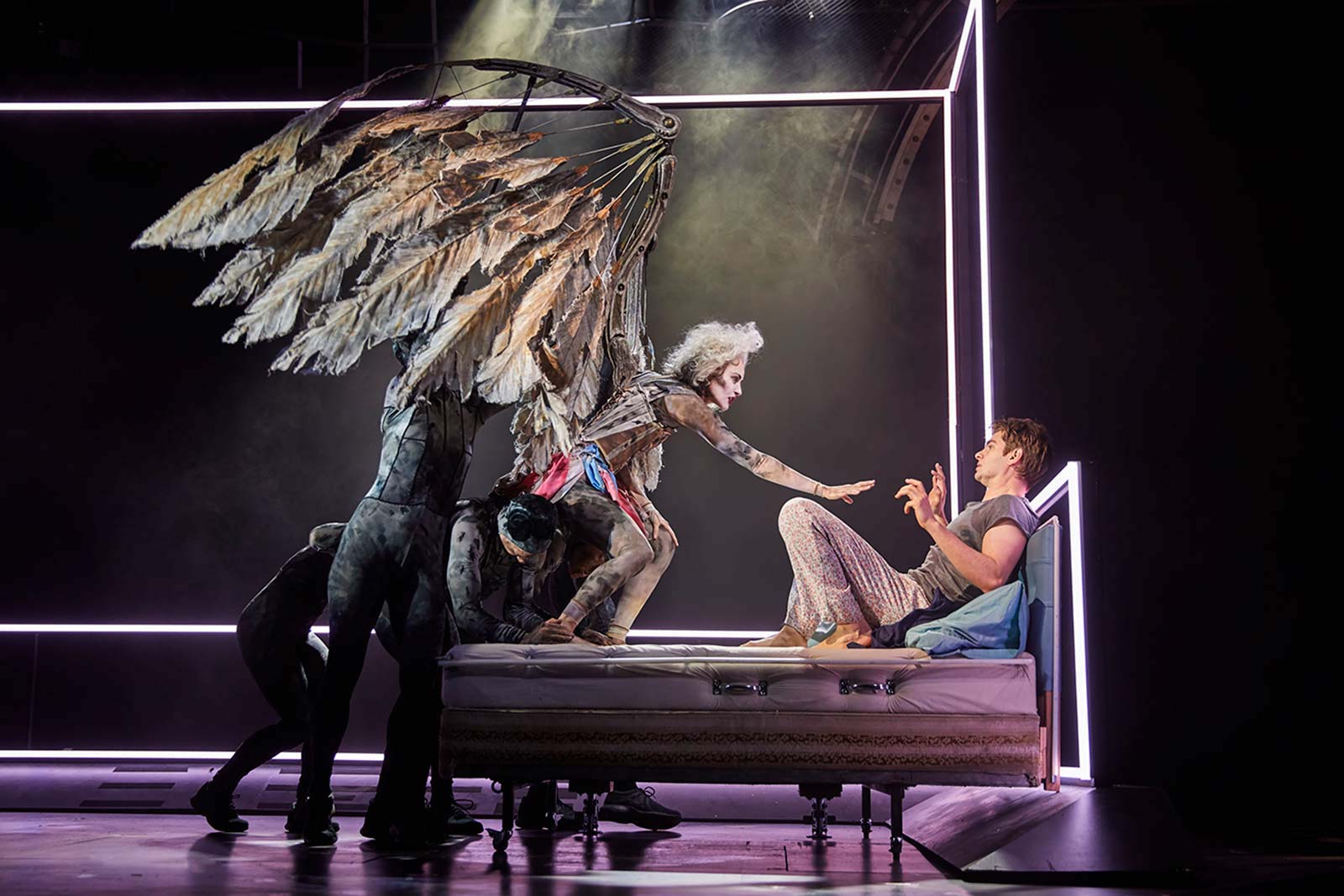 Torn between his job with Roy, and a newly started affair with Joe, he accidentally comes out to his mother, who is appalled. She comes to New York to try and help Joe repair his marriage, but Harper is too far gone in her addiction, even having visions of Prior though the two never met.

Roy is really hoping for Joe to take this position though, as he was recently diagnosed with AIDS himself, but he has to keep his image and says it’s liver cancer instead. On top of that, Roy is facing disbarment after some unwise decisions. But when Joe turns down the position, he ends up so angry he collapses. 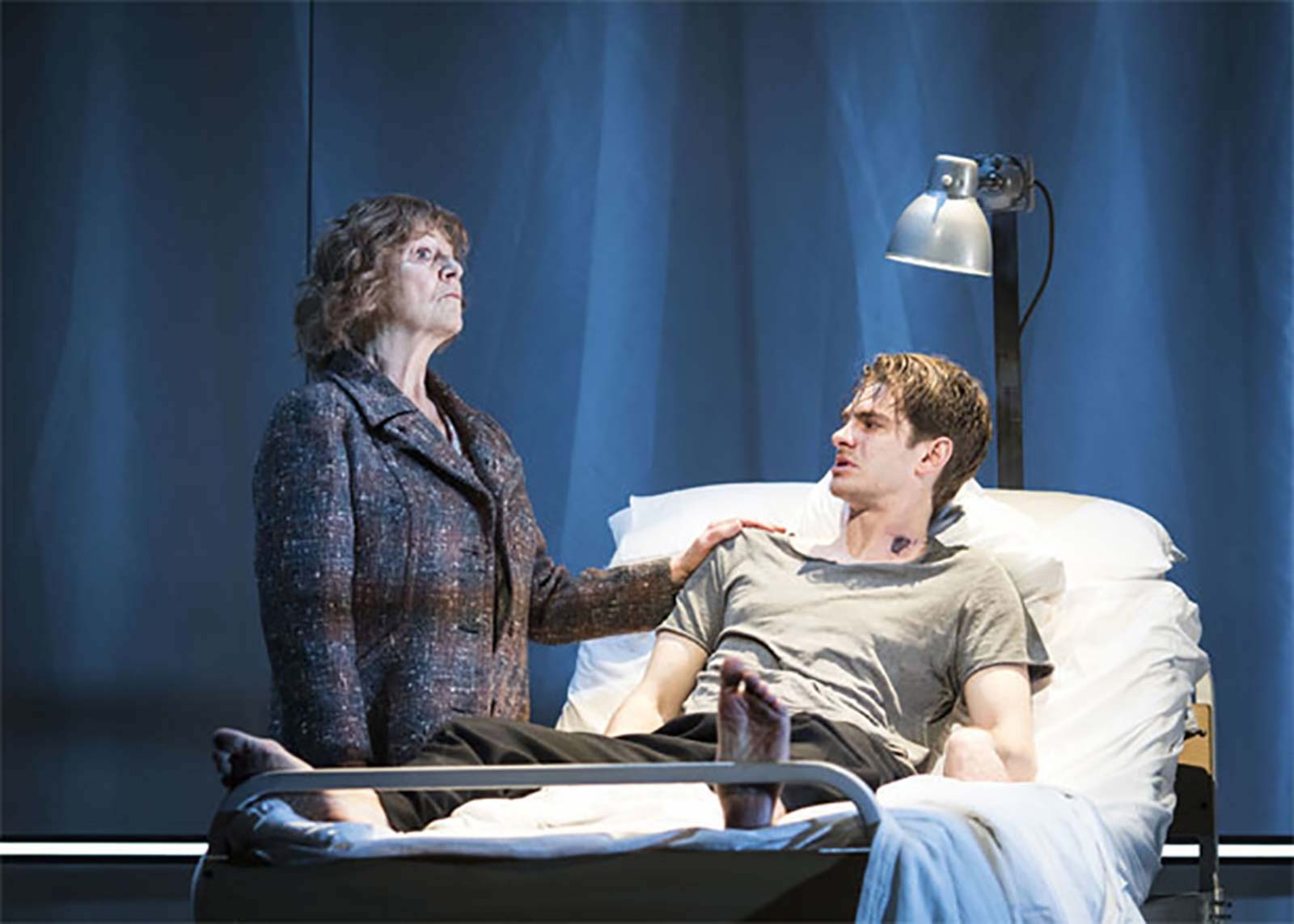 That being said, it wasn’t as great as part one. After his visit with the angel, Prior is physically shaken by the stories told how God abandoned Heaven and the only way to restore heaven is by mankind to stop moving. But Belize writes him off as crazy.

While at work, Belize is the lucky nurse to be stuck treating Roy, who used his ties to get a supply of experimental drug AZT with a drug trial. But after everything he’s done, the only ones spending time with him are Belize and the ghost of Ethel Rosenberg, one of the apparent Soviet spies he sent to death. He dies in the arms of his enemy, as Ethel’s ghost sings him on.

Meanwhile, Prior begins to research more into angels after everything that happened, and meets Joe’s mom Hannah at a Mormon visitor’s center. With her is Harper, who she is trying to rehabilitate. Prior and Harper recognize each other after seeing each other in their own minds, and end up having a shared vision of Joe and Louis together. 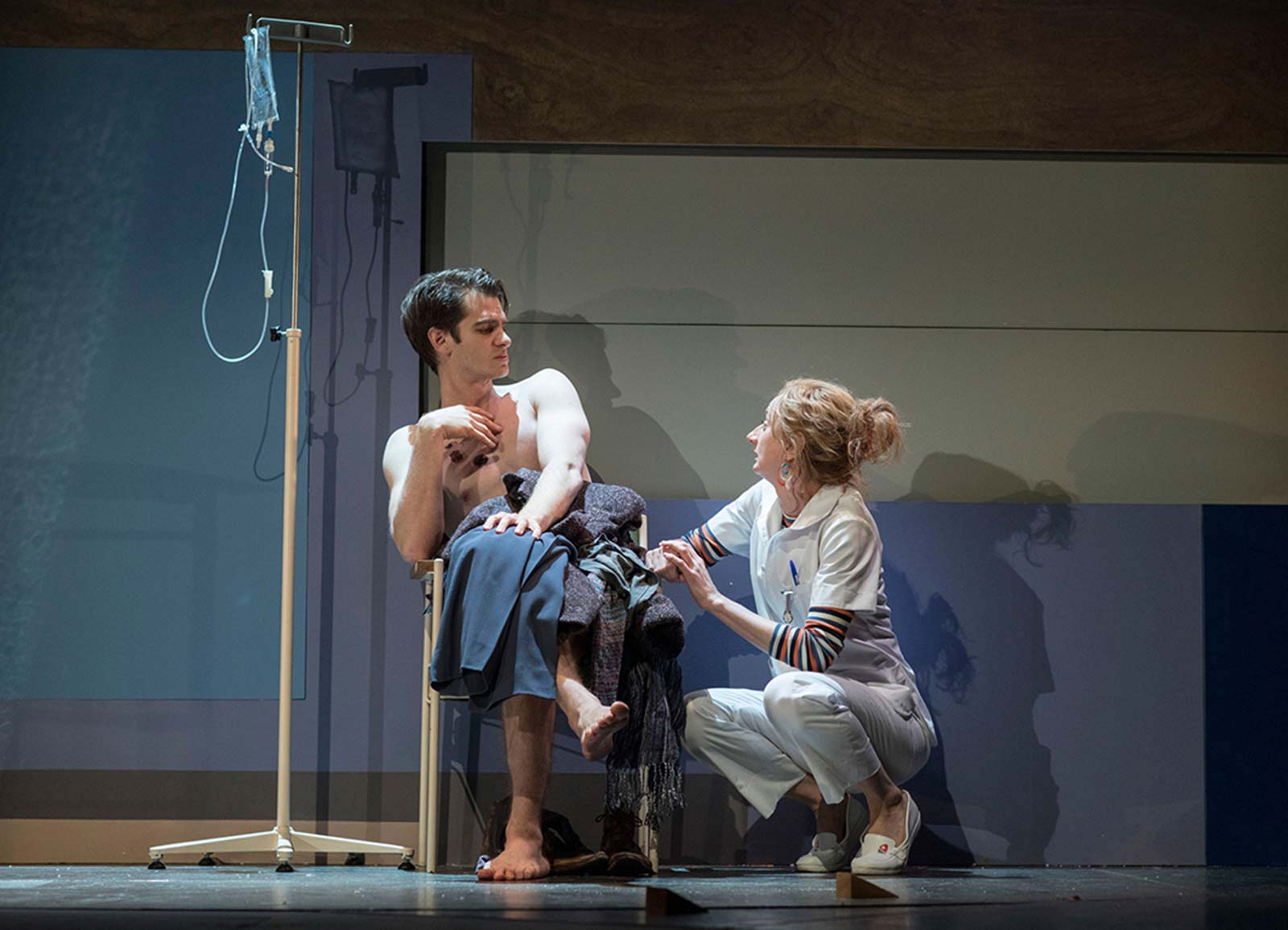 Prior and Belize confront Joe and Louis over this relationship, and Belize makes it clear that Joe had a serious connection with Roy, who Louis despises. After doing his own research, Louis confronts Joe, and after a physical altercation, the two separate. Louis goes to steal Roy’s AZT with Belize after he passes, to try and give Prior a fighting chance.

But after his interaction with Joe, Prior is in a bad state and ends up back in the hospital. As he discusses his vision with Hannah, she actually believes him, as it fits with the Latter-day saint’s depiction. So when the angel reappears, Prior literally jumps and wrestles her to the ground to get into Heaven to speak with the other angels. 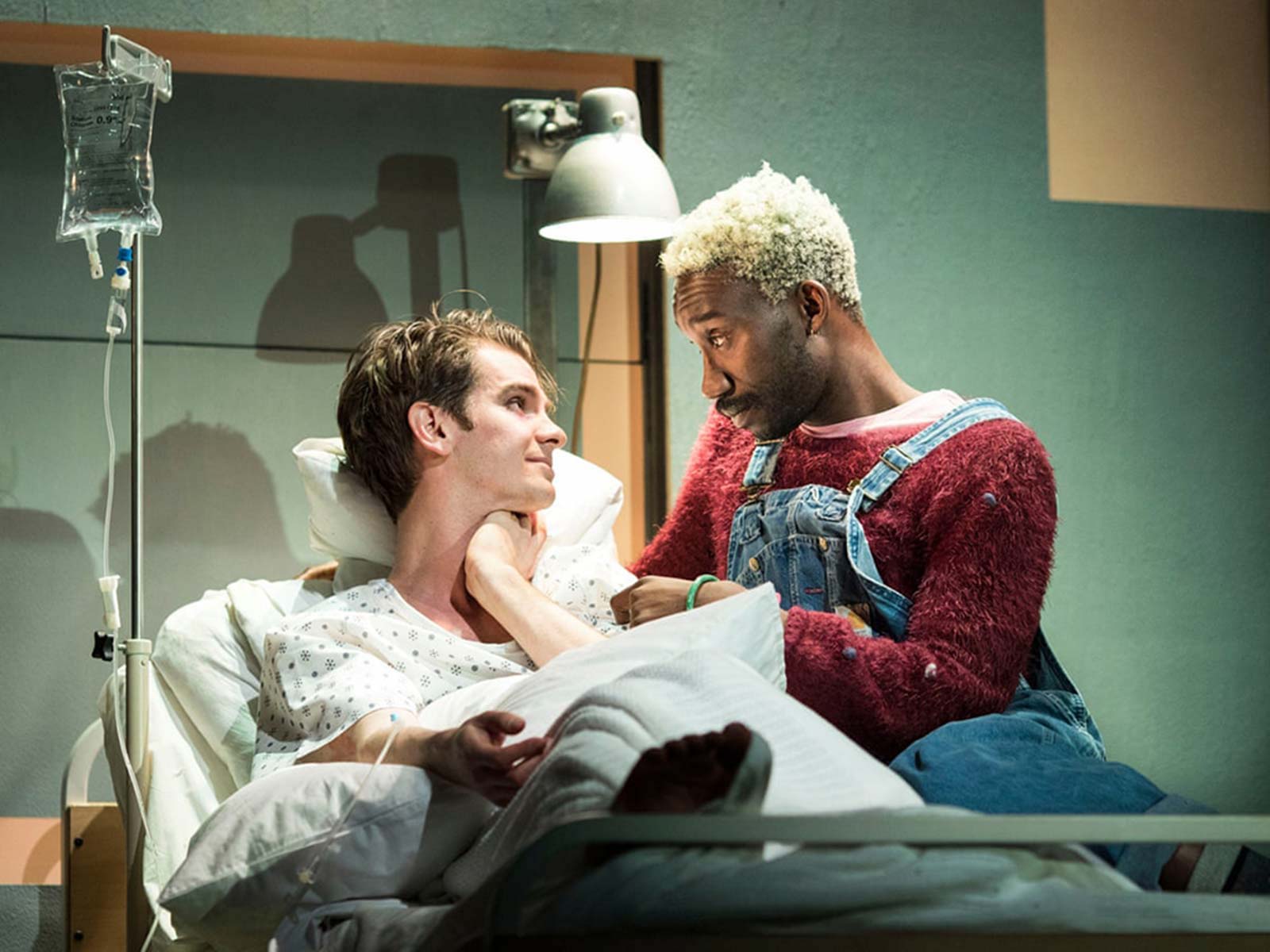 Demanding more life, he tells these angels that it’s impossible for humans to stop progressing as that’s what human life is. He doesn’t want to preach for a lack of change because that’s how life improves on Earth, even if the prospect is awful. Awakening from his speech, his fever has broken and his health is improving.

Finally, Prior and Louis are on good terms again, though separated, Hannah has finally begun to accept her son’s sexuality. The Soviet Union is over, and people are hoping for the best of what’s to come. 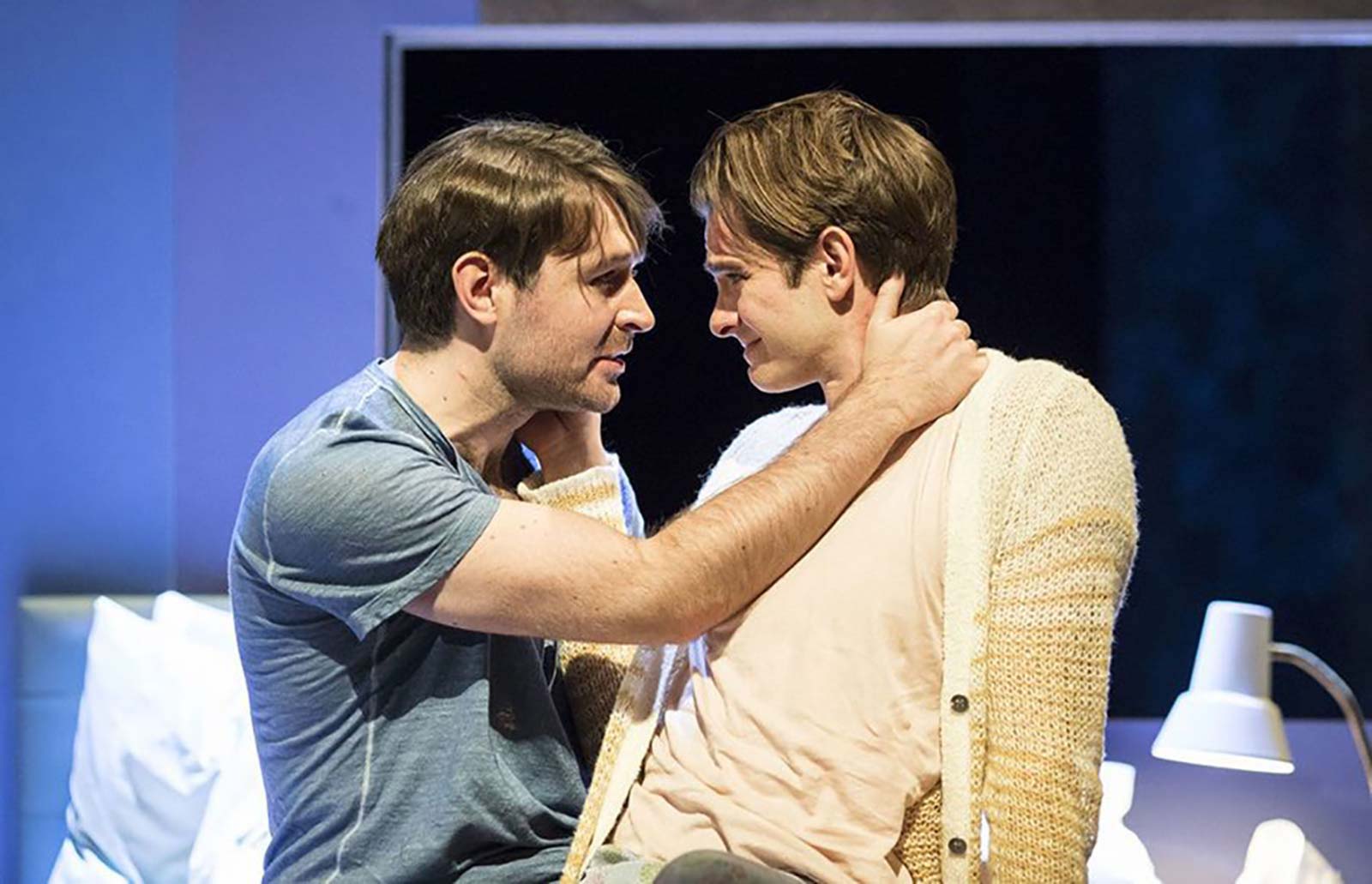 Not everything about Angels in America has ended well. While taking on a very fantasized look at the AIDS crisis, it’s very white. So white, that only one black character is written into the play and even referred to openly as the N-word. Belize is basically the black wise woman character, except he’s a man.

Especially with the majority of the show taking place in NYC, it’s a shame that the majority of characters in the play are white people. It could’ve been a great chance to destigmatize the culture, but racism in the LGBTQ+ community is just as bad as the rest of the world, especially in the 90s. 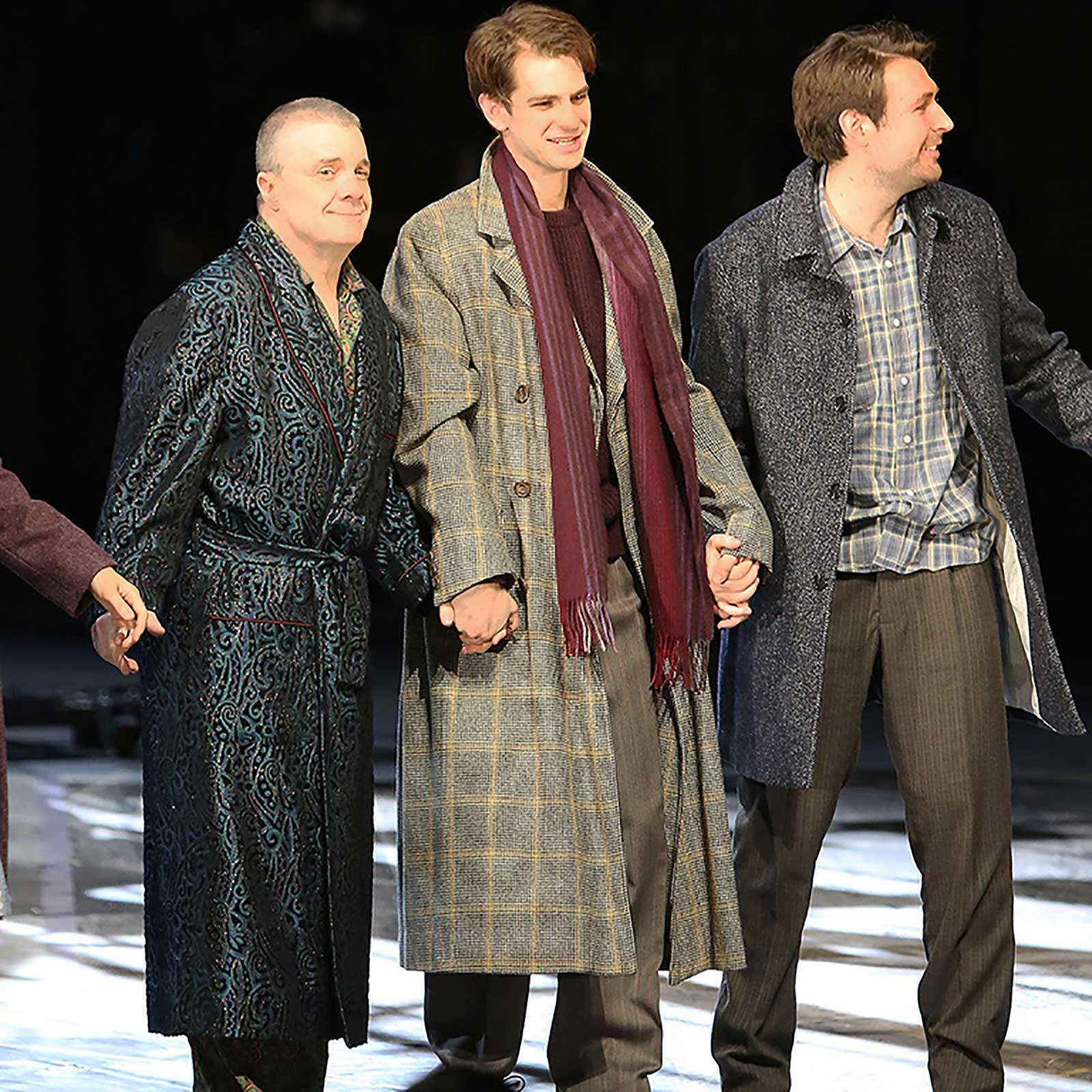 For a story that has such a focus on LGBTQ+ themes, as well as AIDS, it’s surprising that the film features a lot of Jewish and Mormon characters. But part of the mission with Angels in America is that Kushner wanted to show how people don’t realize what religion is doing for people.

Most notably, Kushner tried to recognize the similarities between how Jews and gays are often grouped as “others”. These pairs are people who are constantly mistreated for their identities, and people often fail to remember that many victims in the Holocaust were accused of being gay as well. So Kushner wanted to try and unite the two groups, making Roy Cohn and Louis Jewish to show unity. 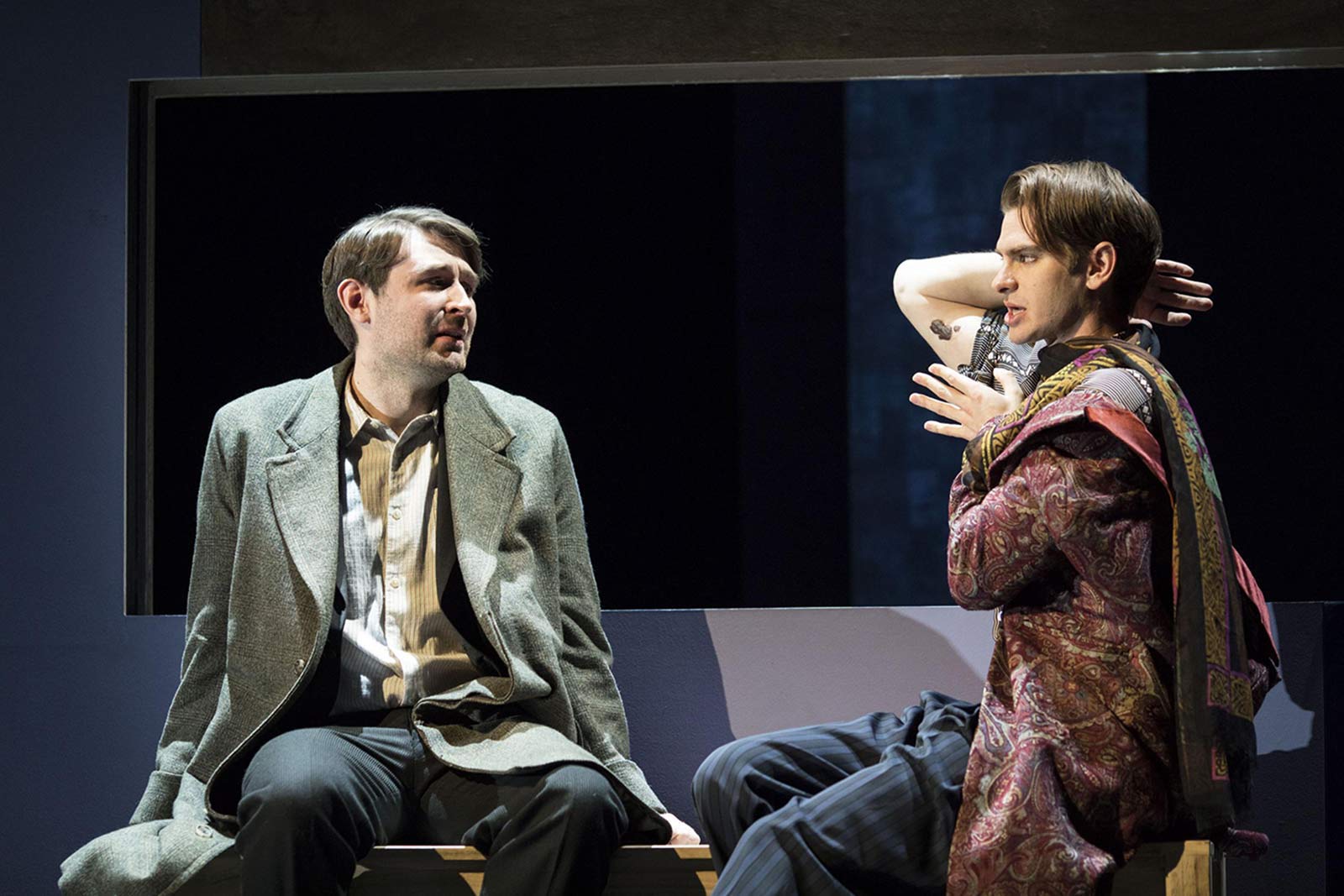 Famous actors take on the journey

As the story has been told time and time again, many actors have taken their journey into Angels in America in the various incarnations of the production. Most recently, Andrew Garfield played Prior in the National Theater and Broadway revivals, alongside Nathan Lane as Roy Cohn. Russell Tovey played Joe at NT, while Lee Pace played him on Broadway.

But they’re far from the first famous actors to brave the stage. Jeffrey Wright got his big break as Belize on Broadway, winning him a Tony. Marcia Gay Harden was Harper in the same production. Before it hit Broadway though, Daniel Craig, Jason Isaacs, and David Schofield all took part in a National Theater production.

We can’t forget the HBO miniseries/movie of Angels in America though, with Al Pacino, Meryl Streep, Emma Thompson, Patrick Wilson, and Ben Shenkman. Plus, Jeffrey Wright reprised his iconic role again in the miniseries, winning him a Golden Globe and Emmy. If there’s ever a movie adaptation of Angels in America, Wright has to play Belize again to get himself an EGOT for the same role. 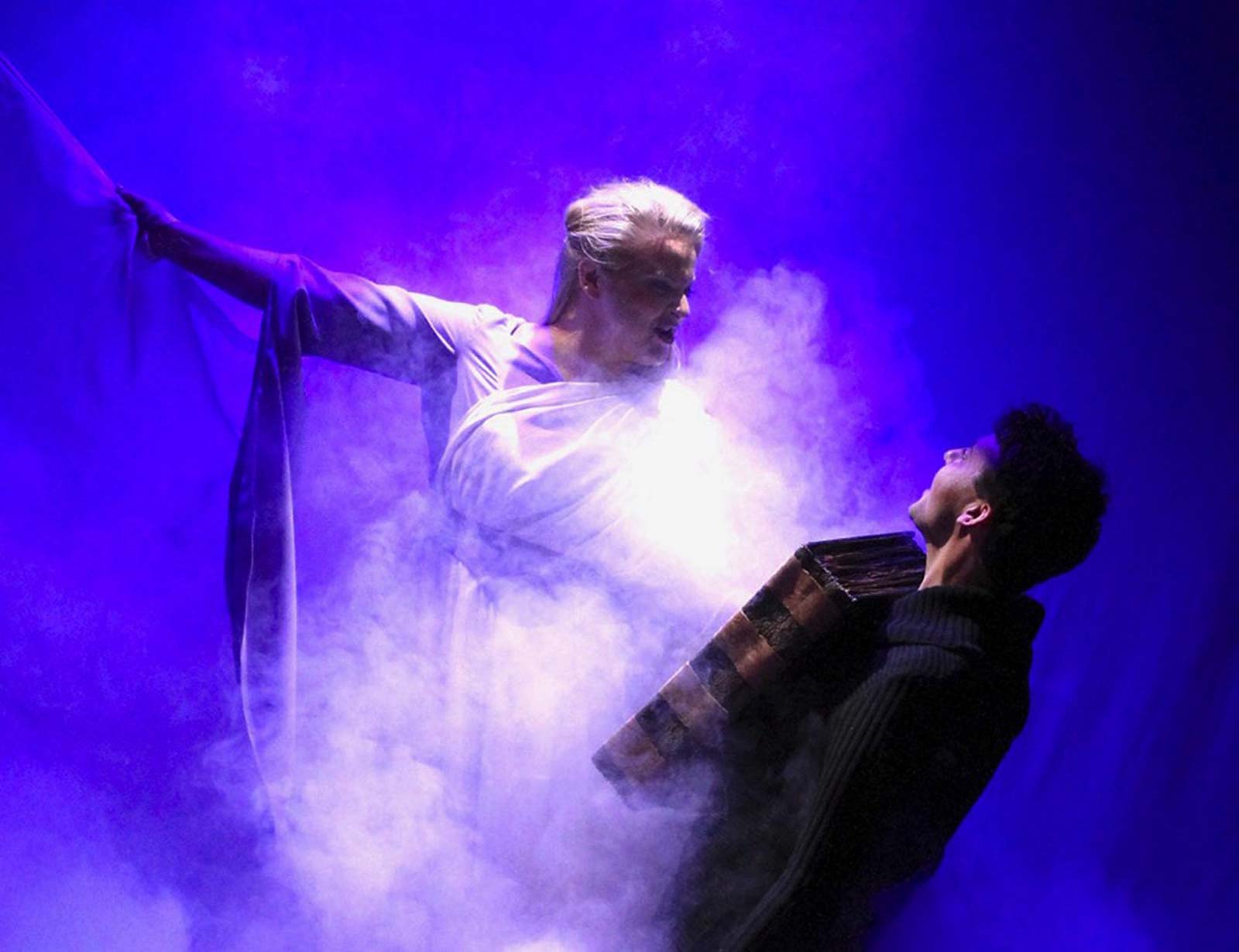 Should we idolize Angels in America?

Naturally, it’s fair to see Angels in America and recognize the issues with it. But it would also be unfair to completely neglect it as if it was never made either. The play has some merit in the unique approach it takes to taking on the AIDS crisis, but it still finds itself susceptible to the racism many gay communities dealt with in the late 80s.

It’s a bit too idealistic in its approach, and many hate the idea of Roy Cohn being a victim like so many other men during these tragic times. But the truth is, just like Angels in America, the AIDS crisis was messy. Nothing anyone did was far from perfect, but the men who were victims deserved better. Angels in America may not be for everyone, but it deserves the attention it has.

Just like Prior argues, life cannot move forward without change. Angels in America isn’t perfect, but it’s still a hugely important piece from the AIDS era that should be acknowledged and recognized, if not also critiqued. 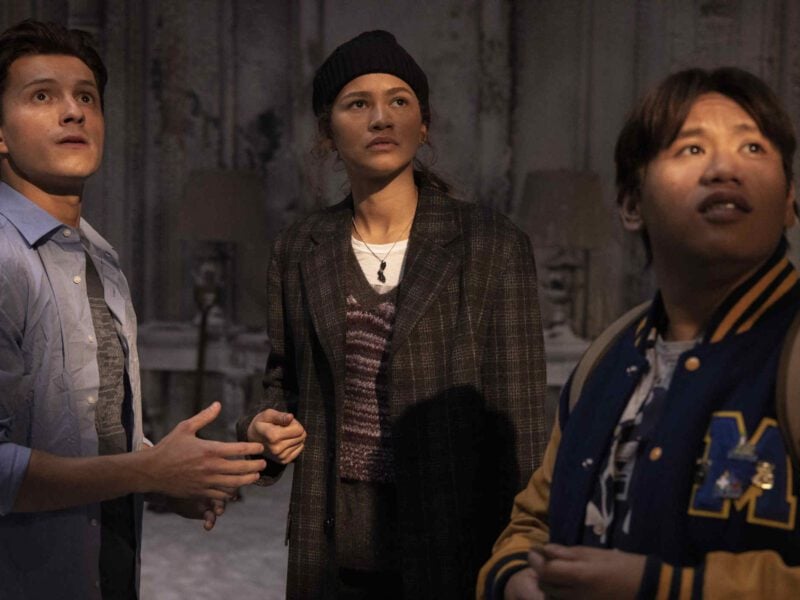