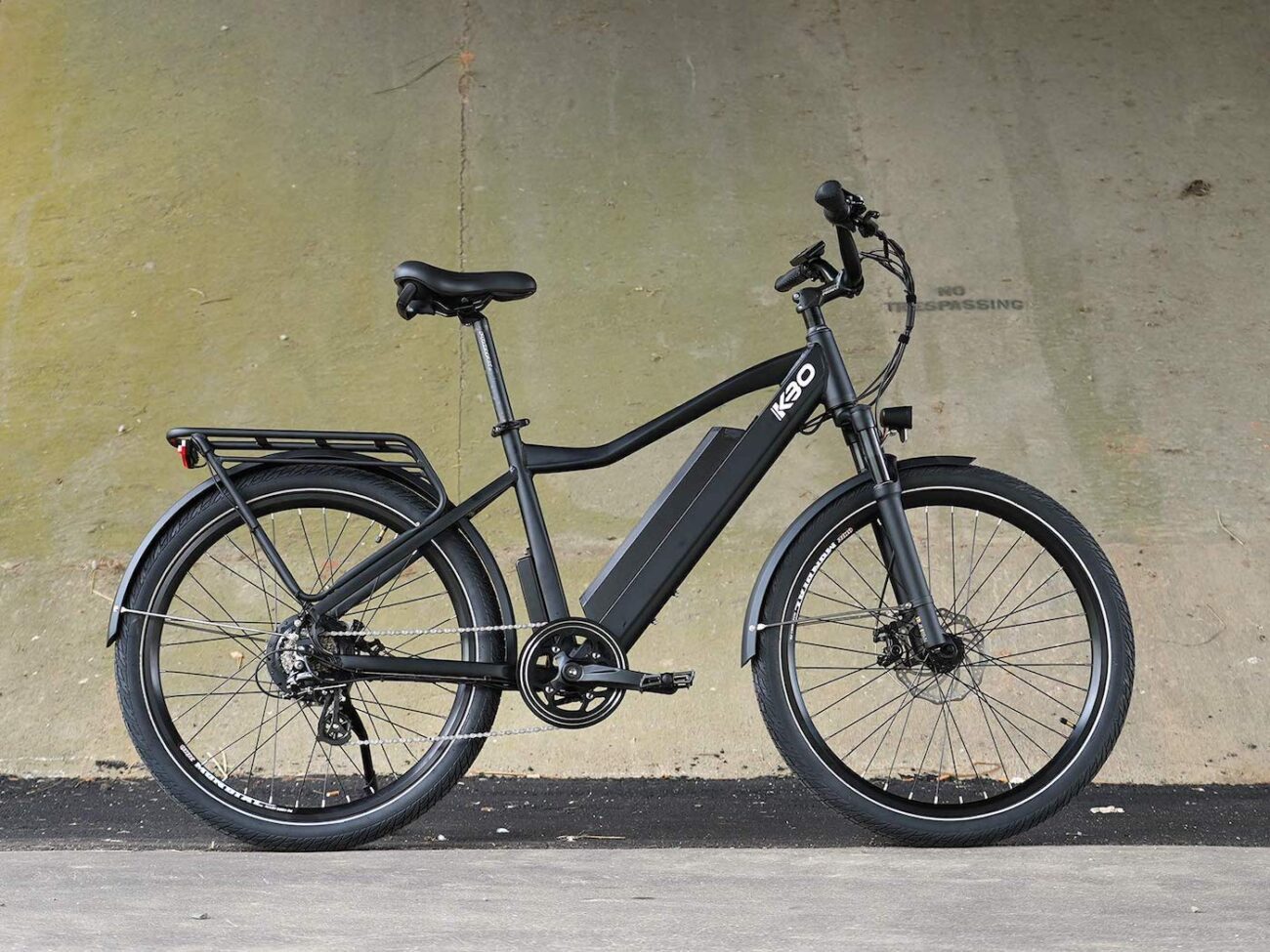 All You Need to Know About Electric Bike History

The term “ebike” has been around since the early 2000s, but when were electric bikes invented?

When most people hear the term “electric bicycle,” the first thing that comes to mind is a scooter or an electric motorbike, but they are not the same thing. Consider a standard bicycle, then add various electrical components such as a motor, a battery, and a controller – all of which are smoothly incorporated into the design. These components are the foundation of all-electric bicycles on the market! 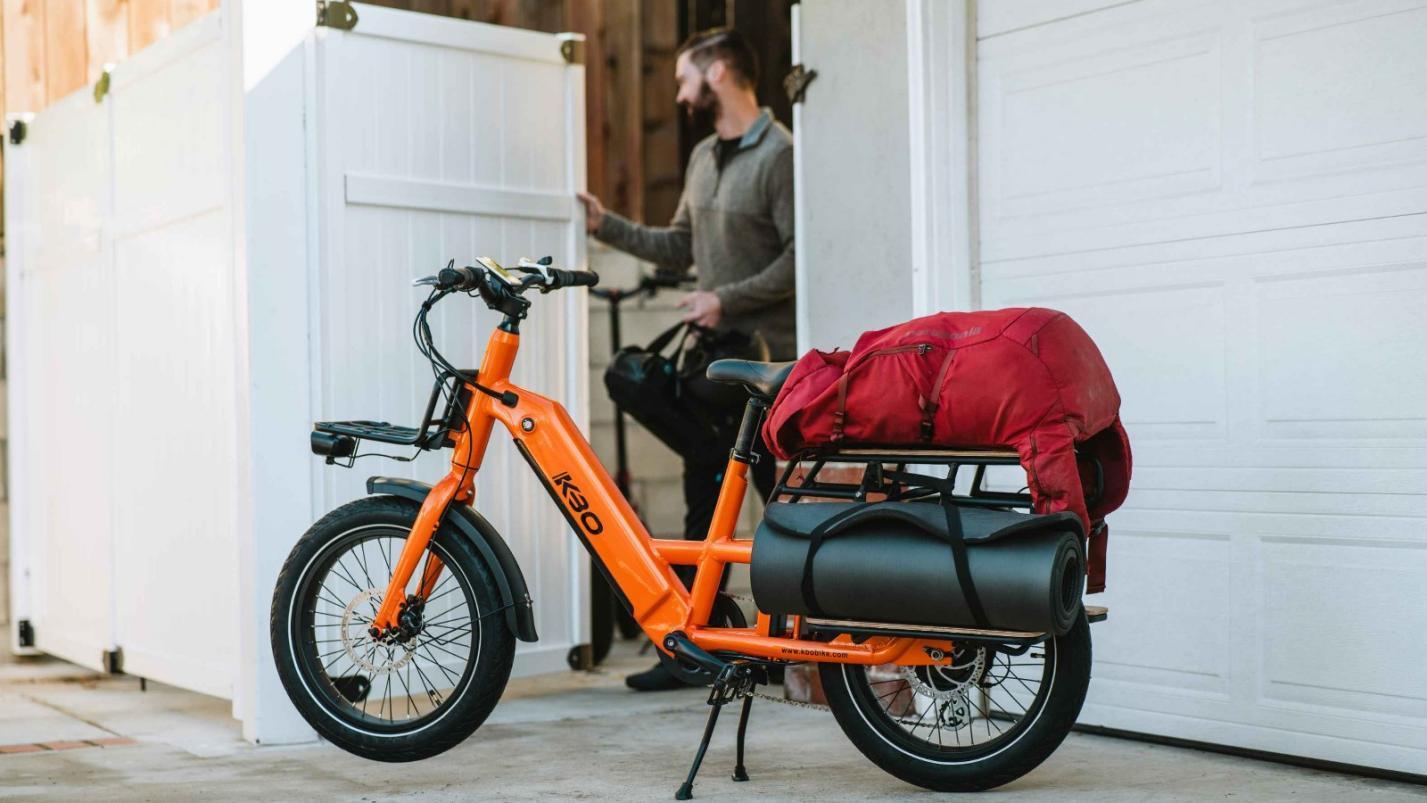 Electric bikes have grown in popularity since re-emerging worldwide about 20 years ago. Yet, many people are unaware that the electric bike has a 120-year history.

The electric bicycle (e-bike) is the only mode of transportation that has captured a considerable portion of the bicycle market share in the past twenty years. Since 1998, it has had tremendous sales growth thanks to its basic form, resembling a standard bicycle, tiny and efficient electric motor, and simple control techniques. Today, it is believed that over 120 million electric bicycles are in use in China alone. Electric bicycle use is rapidly increasing in Europe and North America, with 1.5 million bikes reported yearly sales.

One of the most attractive aspects of electric bicycles is that they emit no hazardous emissions from their combustion engines and pose no risk of contamination to the environment. Even when the expense of regular battery changes is factored in, an e-bike is far more ecologically sound than any other public road transportation device. Another advantage of electric bicycles is their usage in rehabilitation for recuperating patients. Patients with cardiac difficulties, for example, might considerably enhance their mobility by using e-bike models that minimize muscular tension and heart stress. One of the disadvantages of the electric bicycle has been identified in China. When utilized on traditional routes designed for traditional bicycle use, the speed of the e-bikes proved to be problematic.

The earliest electric bicycles were documented in patent offices in France and the United States in the 1880s and 1890s. One of the first was a three-wheeled electric vehicle in France. The motor power was regulated by a hand-held lever mechanism with no pedals.

In the United States, Ogden Bolton Jr. received one of the first patents in 1895 for a battery-powered bicycle with a hub motor installed inside the back wheel and a battery located inside the main triangle of the frame, which is similar in principle to some current electric bikes. As time passed, additional designs and bicycles entered the market, some of which served as the inspiration for many of today’s machines. Hosea W. Libbey of Boston built an electric bike operated by a “double electric motor” in 1897. The motor was built within the crankset axle’s hub. (This type is based on the same design and functioning principles as modern mid-drive motors seen on some bikes.) On a flat area, just one battery would function, but when climbing a hill, the second would operate.

The first rear-wheeled electric bike, invented in 1898 by Mathew J. Steffens, employed a belt around the exterior to generate power. In the years that followed, each design component was developed and tested. However, they were eventually forgotten as the creation of the automobile took the spotlight.

Throughout the middle of the twentieth century, electric bikes began to see their first instances of mass manufacture. Europe was the first to experience these early adoptions, with higher production levels and increased consumption. The 1932 Phillips Simplex Electric Bike resulted from a partnership between Philips and Simplex. With the 1975 Panasonic and the 1989 Sanyo Enacle, Japanese technology and manufacturing joined the market of electric bikes as time passed. These motorcycles still used lead-acid and NiCad batteries, heavier than the newer, lighter battery compositions. The advantages of new participants in ebikes resulted in increased innovation and the production of more electric bikes.

One of the most significant improvements was the first ‘Pedelec’ or Pedal Electric Cycle (today known as pedal-assist) in 1989. The motor power is activated as assistance when the bike records any pedaling movement. Rather than utilizing a throttle mechanism to operate the engine, as all prior versions did, users could ride an electric bike like a traditional bike. Michael Kutter created similar pedelec systems on a handful of his cycles before assisting the Velocity Company in constructing the 1992 Dolphin Electric Bike for customer purchase. Pedal-assist has become standard for modern electric bicycles, following Kutter’s pedelec bike. Other companies prefer throttle-style assistance, while others prefer pedal assistance. Some incorporate both technologies into their designs (like us!). Modern electric bikes have also received upgrades in Lithium-Ion batteries, which enhance capacity while maintaining an overall battery weight much lower than competitors and predecessors.

Other technologies were developed throughout time, ranging from new types of sensors to power controls in the late 1990s. However, at the time, fewer electric bikes were available for purchase, with traditional bikes continuing to dominate the market. In the years leading up to the turn of the century, the manufacture of electric bikes began to pick up steam, gaining headway in a market usually dominated by ordinary bicycle production and use. Electric bikes were popularly referred to as “ebikes,” “power bikes,” “pedelecs,” “pedal-assisted bicycles,” and “power-assisted bicycles” by 2001. 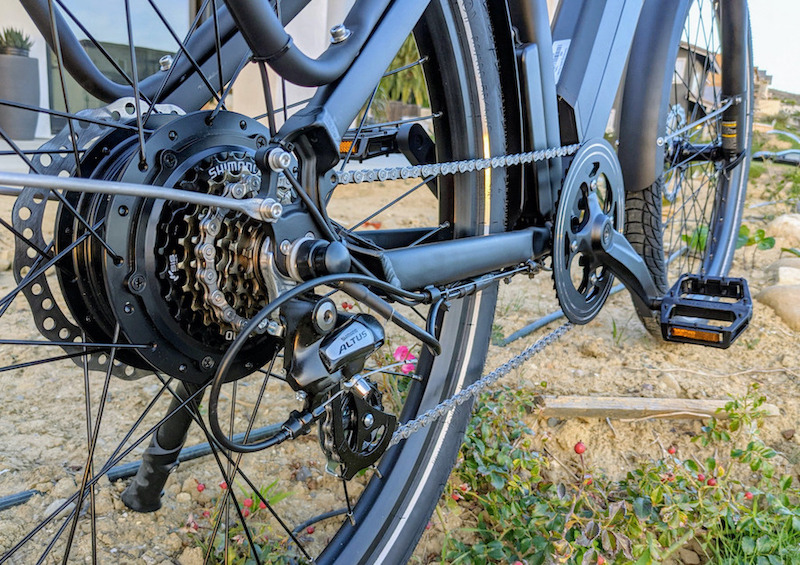 The basic concept of an e-bike is a regular bicycle frame (with or without pedals) and a modest electric motor (up to 750 watts) driven by light rechargeable batteries (lead-acid, NiCd, NiMH, and Li-ion). The maximum speed of the engines is limited to 24 to 32 km/h (15 to 20 mph). There are various types of engines today, the most common of which are direct-drive and geared. Transmission to the wheel is accomplished by a chain drive, belt drive, hub motors, or friction drive. One of the first electric bicycle models, introduced in 1980, had a solar charging station for recharging onboard batteries.

As the industry entered the new millennium, production and use of electric bikes began to skyrocket, with output increasing by 40% between 2002 and 2004. Most of this expansion occurred in China, where additional factors like air pollution bolstered the market and helped push innovation even further. Currently, the country has more than 120 million ebikes on its roadways, up from only 56,000 in 1998.

Outside of China, the primary regions of electric bike growth are mainland Europe and the United States, where sales do not yet approach those in China but are expanding year after year. Ebike schemes have been established in major cities worldwide, including Boston, Copenhagen, and Amsterdam, allowing those who would never purchase one to try one out.

In the United Kingdom, sales have been significantly slower to pick up, with the country accounting for just 2.79 percent of the European market in 2011, compared to 43.25 percent for Germany and 24.85 percent for the Netherlands, both of which have strong cycling traditions. This is beginning to change, though, as more people discover the tremendous electric bikes available at far more affordable costs.

Today, global production and usage of electric bicycles are constantly increasing, with new and experienced riders incorporating ebikes into their lifestyles. Biking is now regarded as more accessible to individuals of all ages and backgrounds, thanks to an electric motor. Mountain biking is also becoming increasingly popular due to the introduction of ebikes and fat-tire bikes, which allow more people to engage in the sport. An ebike allows for bike commutes that might be too distant, too lengthy, or too sluggish. Many other current ebikes are intended for city riding and commuting. Many riders have selected an electric bike for day-to-day city riding due to the advantages, comfort, and efficiency of ebikes and the componentry and infrastructure meant to carry people from one point to another.

In addition to people’s daily transit, electric bikes provide a cleaner mode of transportation for business and merchandise. With cargo bikes and business trikes changing the way commerce moves, bike racks are no longer only for a change of clothes or a personal bag. Electric bikes enable their users to benefit from the efficiency and mobility of a bicycle while also harnessing their engine’s power to substantially increase the capacity for hauling oversized cargo and commodities from anywhere. 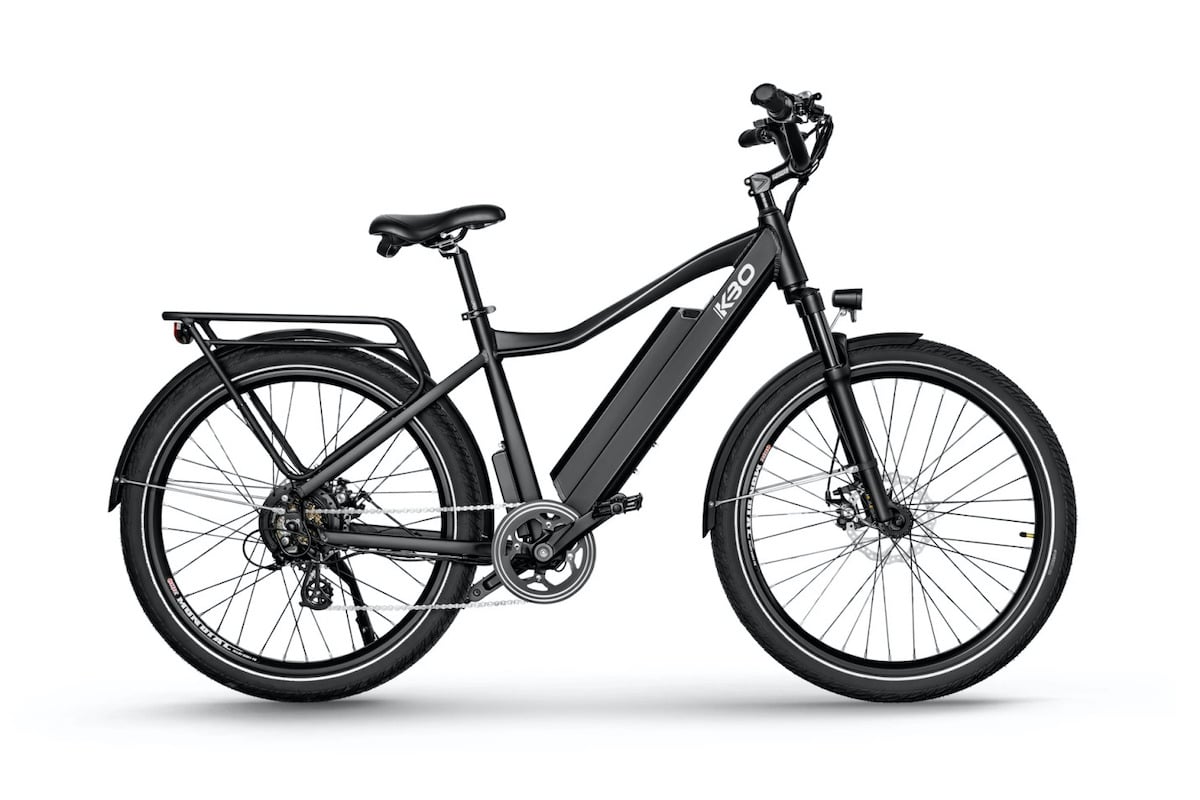 People can use electric bikes for enjoyment, work, or both. But what makes them even more powerful is their potential to influence the way individuals live their lives, which they have demonstrated repeatedly. Electric bikes have gone a long way in a century and a half, with a history and heritage of trial-and-error, many prototypes, and many models, styles, and uses. Even more fascinating than the history of ebikes is the future of where they will be able to take us. 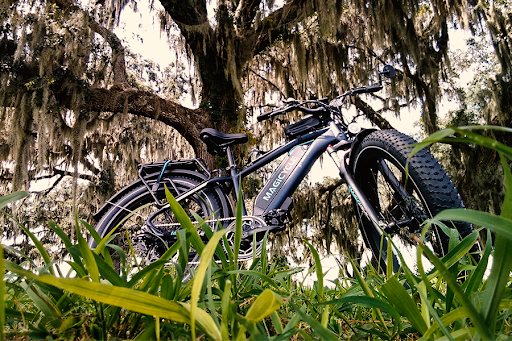 5 Tips for Riding Electric bikes in the Rain 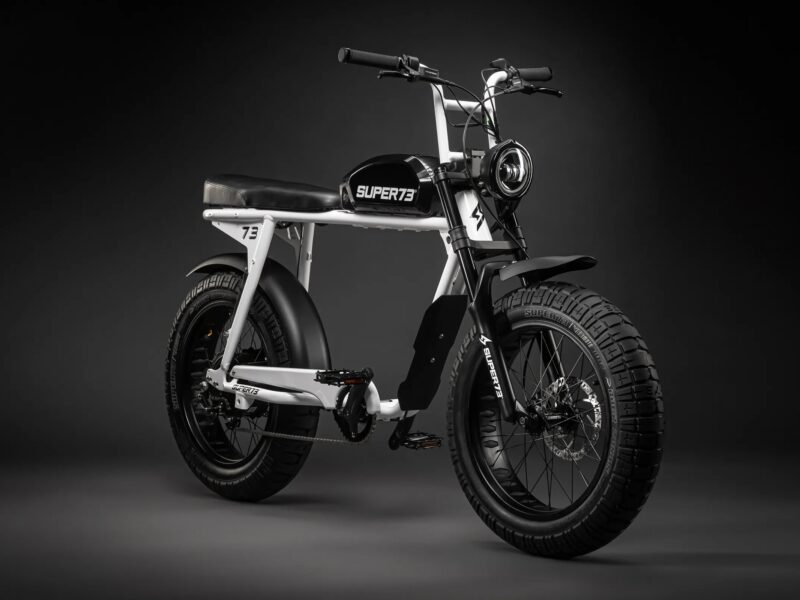 What are the Best Fat Tire Folding Electric Bikes? 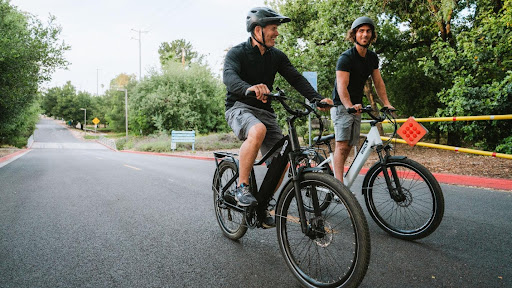