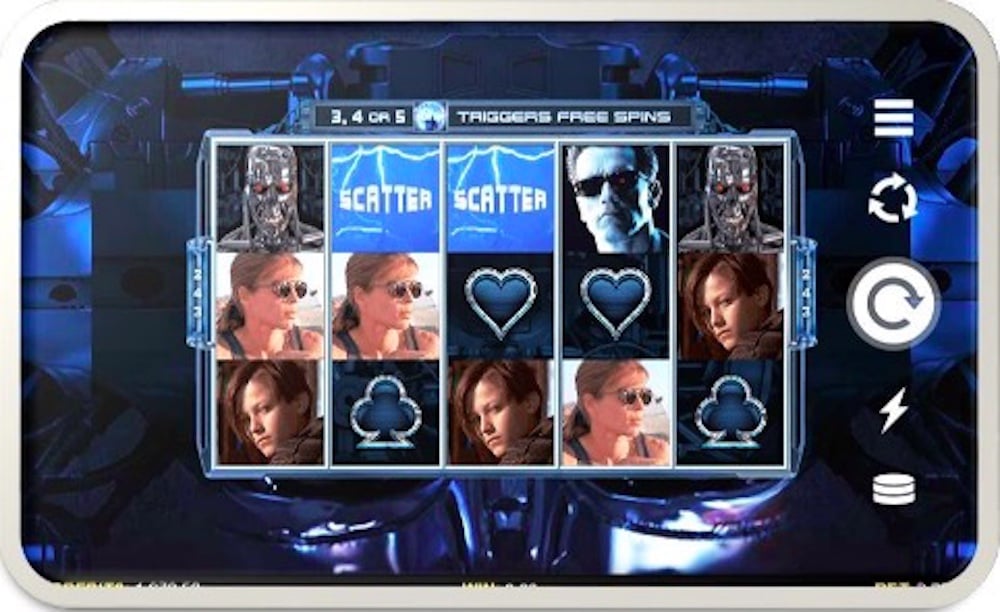 ‘Terminator 2’: The Cult Movie Is Now an Online Slot Machine

This new online slot game is quickly capturing the attention of thousands of players in Canada, USA, EU and Asia, especially the ones who also love the movie Terminator, but why is it creating so much hype? Let us look deeper into this new online slot-game and find out how it is, how it works, and all about the most exciting features.

From movie to online slot machine

Terminator 2: Judgment Day is a beloved cult movie and second installment of the colossal Terminator franchise. Among the Terminator films, T2 is the favorite of many fans of the saga since it portrays a less-advanced Model 101 Terminator (also known as T-800) fighting the high-tech shapeshifting T-1000, an advanced terminator made of liquid metal and equipped with powerful weapons. The target of the terminator is to protect John Connor, Sarah’s son and future leader of the resistance, whom the T-1000 was sent back in time to kill. The future of humanity is at stake and, in the fight against Skynet and robots, the destiny of billions of people rests on the shoulders of a droid, who will fight for mankind. The plot itself gives a good idea as for why the movie and the saga in general are this popular.

Thirty years after the release of the second movie (1991), and more than 35 years after the first movie (The Terminator – 1984), the franchise still has hordes of fans, even though the latest movie (Terminator: Dark Fate – 2019) was not very successful. The overall franchise though, generally speaking, is still prolific and fruitful, and the Terminator merchandise – videogames, replicas, action figures and so on – are still as popular as they were decades ago.

On the wave of this decennial success, the well-known software company Microgaming recently released a slot machine based on Terminator 2, for the players to enjoy the thrill of a slot machine game while living a full-immersion experience in the T2 world. I would not be surprised if we soon see Terminator 2 slot as one of the top online slot machines over at onlinecasinos.net.

Microgaming is a leading software-development company, active since 1994, that is especially famous for its work in the online casino industry. Thanks to the high-definition graphics and the innovative and creative gaming experience of their products, Microgaming games are chosen by hundreds of online casinos.

Terminator 2 is an amazing video-slot featuring evolved graphics and animations, which are particularly brilliant and exciting in the T-800 Vision bonus game. The game does not present a progressive jackpot feature and the volatility of this slot is relatively high, but the payouts and the RTP are very good, with a return-to-player percentage of 96.62%.

The game itself is a little different from what Microgaming had us accustomed to, but it is still easy and intuitive to play. The game is based on 5 reels and 243 pay-lines, in standard mode, which become 1024 in Free Spin bonus mode. The game also features the T-1000 droid symbol, which, just like the T-1000 is a shapeshifting droid, can transform into other symbols. Then there is a wild symbol (the T2 symbol), a scatter symbol (the globe symbol), a multiplier, the Free Spin bonus game we mentioned before, and a T-800 Vision bonus game. The slot also features a convenient auto-play option.

The graphics of the game are of remarkable quality and are inspired from the movie in every possible detail. The symbols and the background are obviously themed, but it is not just that: all the sounds, the animations and the game rules are 100% based on the movie Terminator 2. Furthermore, when a winning combination of symbols is scored, a short clip from the original movie is shown as part of the celebration animations.

The Terminator 2 symbol is the wild symbol; keep in mind that it cannot replace the Scatter symbol, nor the T-1000 symbol of the Free Spin bonus game.

The globe symbol is the scatter symbol. The scatter winning combination is complete when two or more globe symbols appear on the reels, and it cannot be replaced by the wild symbol. Scatter wins are calculated by multiplying the scatter symbol combination win with the total number of regular coin wagers. Also, scatter wins will be added to regular wins, so, if you land a scatter win and a regular win, you will be paid for both wins. In addition, three or more globe symbols on the reels activate the Free Spin bonus game, but when playing in T-800 Vision game mode, only one Globe symbol is required to activate the Free Spin bonus game.

This feature is especially exciting, because it turns a losing spin into a winning spin and also gives you the chance to win free spins. The T-800 Vision bonus mode is automatically activated, randomly, at the end of a non-winning spin. When the feature activates, the reels turn red mimicking the sight of a T-800. Any character symbol – Terminator 2, John Connor, T-1000, Sarah Connor, or T-800 – that appears on the reels is targeted by the T-800, and you win instantly. During T-800 Vision, with one globe scatter symbol the Free Spins bonus game is activated.

As we anticipated, three or more Globe symbols on the reels activate the Free Spins bonus game, but During theT-800 Vision mode, even only one Globe symbol is sufficient to activate the Free Spins bonus game. When you fulfill either of these conditions, the bonus game is activated, and you win ten free spins. A Hot Mode can also be randomly triggered, increasing the frequency of the payouts. If the T-1000 symbol appears on the reels in this mode, when it transforms it will transform into the symbol that makes for the highest possible win for that spin. Notice that the bonus game cannot be reactivated during free spins. In this case as well, bonus wins are added to regular wins.

All the control buttons to play Terminator 2 are on the right side of the game screen, next to the five reels. When you spin the reels, the symbols need to match from left to right to form a winning combination. You can use the button on the bottom right corner to set the value of the coin, and consequently the value of the stake. You can choose the desired value from a set of alternatives; the suggested values are 0.01, 0.02, 0.05 and 0.10.

This video-slot is also available for mobile devices and on the Apps of various casino platforms. It is available for both Android and iOS devices, thus covering more than 99% of the smartphone and tablet market. The mobile version is just as enjoyable as the desktop version and offers great convenience and usability to the player, giving him/her the chance to play on all his devices, at the time and in the place that are most convenient for him.

It is also possible to access the game directly from the browser of your smartphone or tablet; simply open the website page of one of the casino platforms that offer this slot machine game and whose website is compatible with Android and iOS browsers.