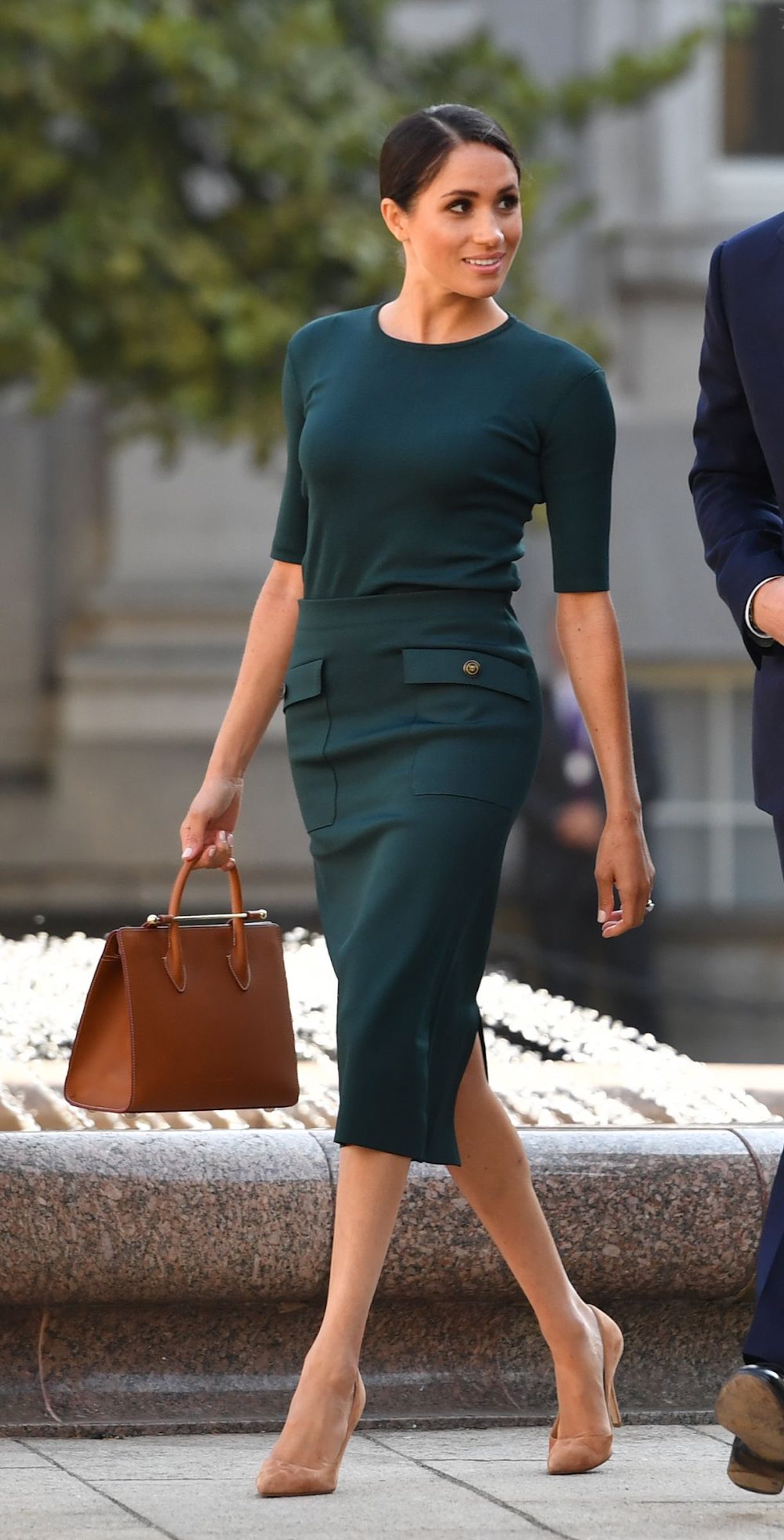 Is Meghan Markle the queen of ‘Suits’? Every power suit she’s rocked

While Suits was certainly a smart, classy show with its own merits — epic one-liners, smart characters who are equally attractive, and of course, the suits — it’s also the legal drama that introduced many of us to Meghan Markle.

More importantly, it introduced us to her character Rachel Zane’s fabulous corporate wardrobe. Longtime fans of the series will recall Rachel’s style stood out in particular, mainly because many of her outfits and signature pieces mirror Meghan Markle’s ensembles in real life.

After leaving the show in 2011, Meghan Markle has since become not only royalty, but also a fashion icon. We’ve come to know her chic, preppy style & affinity for a crisp button-down quite well.  Among the many similarities, it seems Markle & Rachel both love a casual yet elevated look, usually consisting of a loose dress shirt and expert tailoring. The show was called Suits, after all. 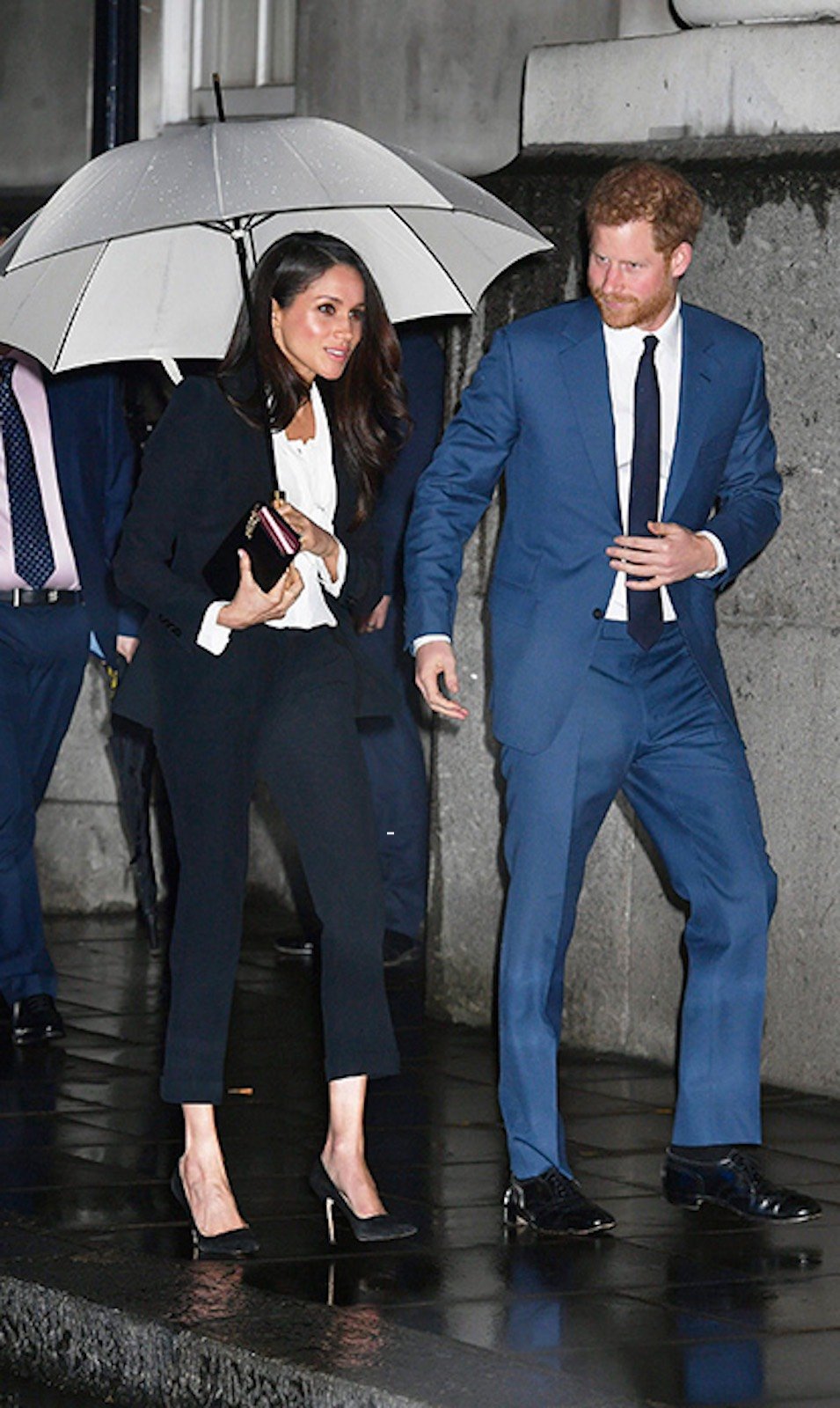 The impact of Meghan Markle’s classic monochromatic suit at the 2018 Endeavour Fund Awards, Meghan opted for sleek tailoring when she accompanied her then-fiancé Harry to the event. The former Suits actress was clad in an Alexander McQueen number paired with a white blouse. She accessorized with a black Prada clutch and black Manolo Blahnik pumps. 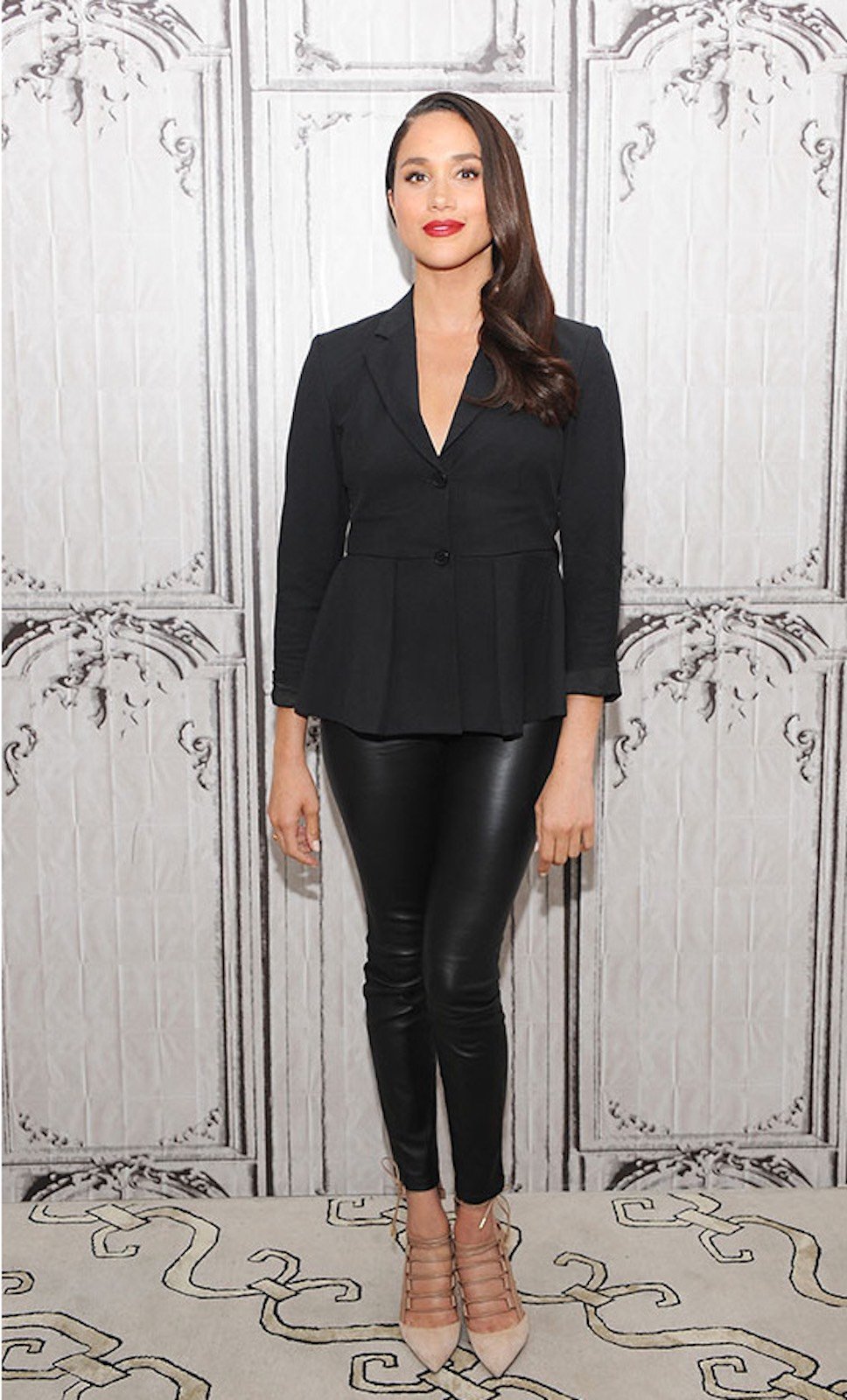 Before royal life, the stylish star showed off a cool twist on a black suit with a pleated jacket and leather leggings during an AOL Build Presents Suits event. The all-black outfit was juxtaposed with strappy light taupe heels. 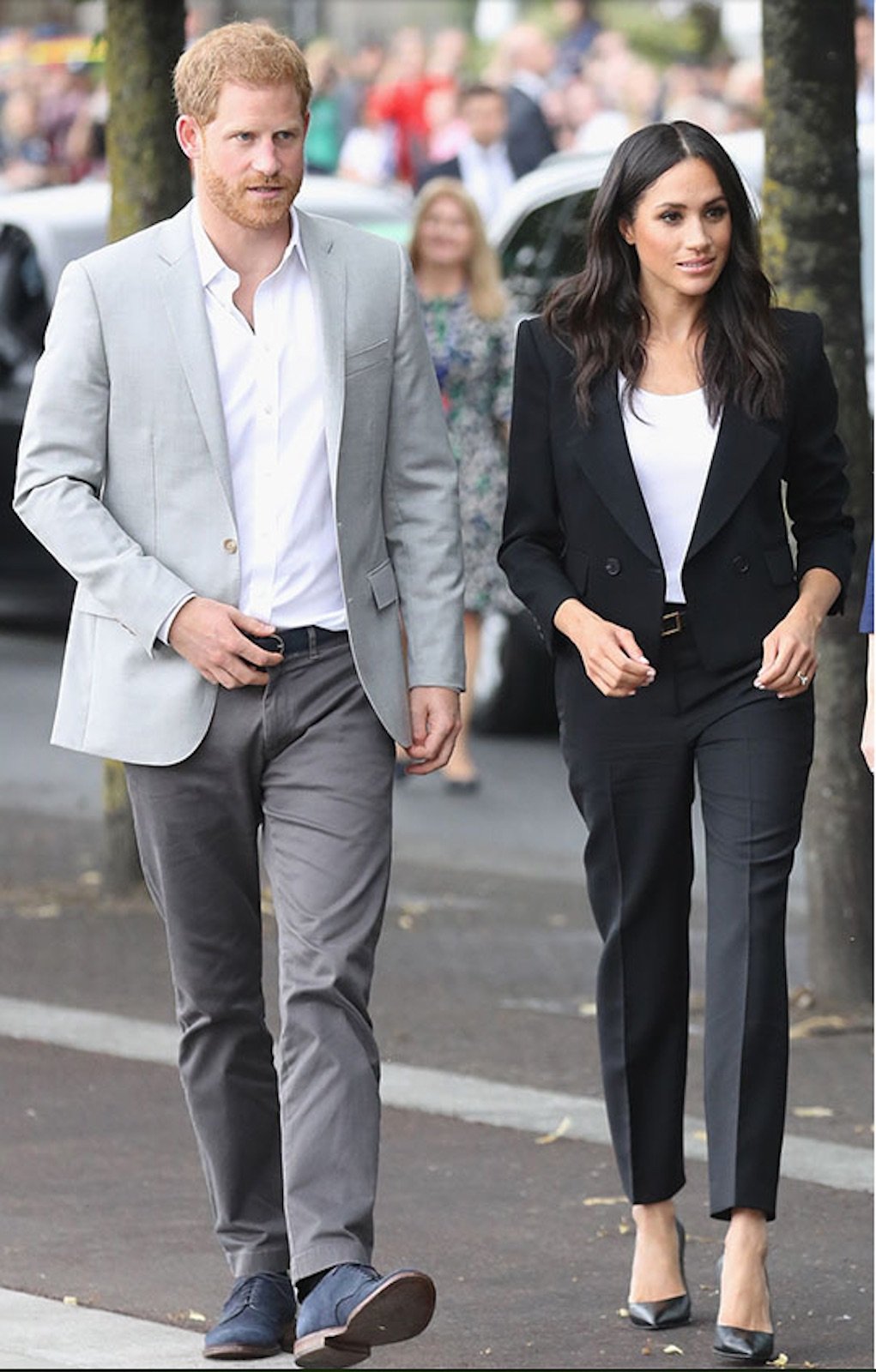 During Prince Harry & Meghan Markle’s royal tour of Ireland that July, the newlyweds showed off their interpretations of suits at the Famine Memorial in Dublin.The duke was clad in shades of grey, while Meghan sported a sharp black number from her wedding designer, Clare Waight Keller for Givenchy. Meghan Markle completed the monochromatic suit look with a white scoop neck T-shirt, Givenchy belt & Sarah Flint pumps. 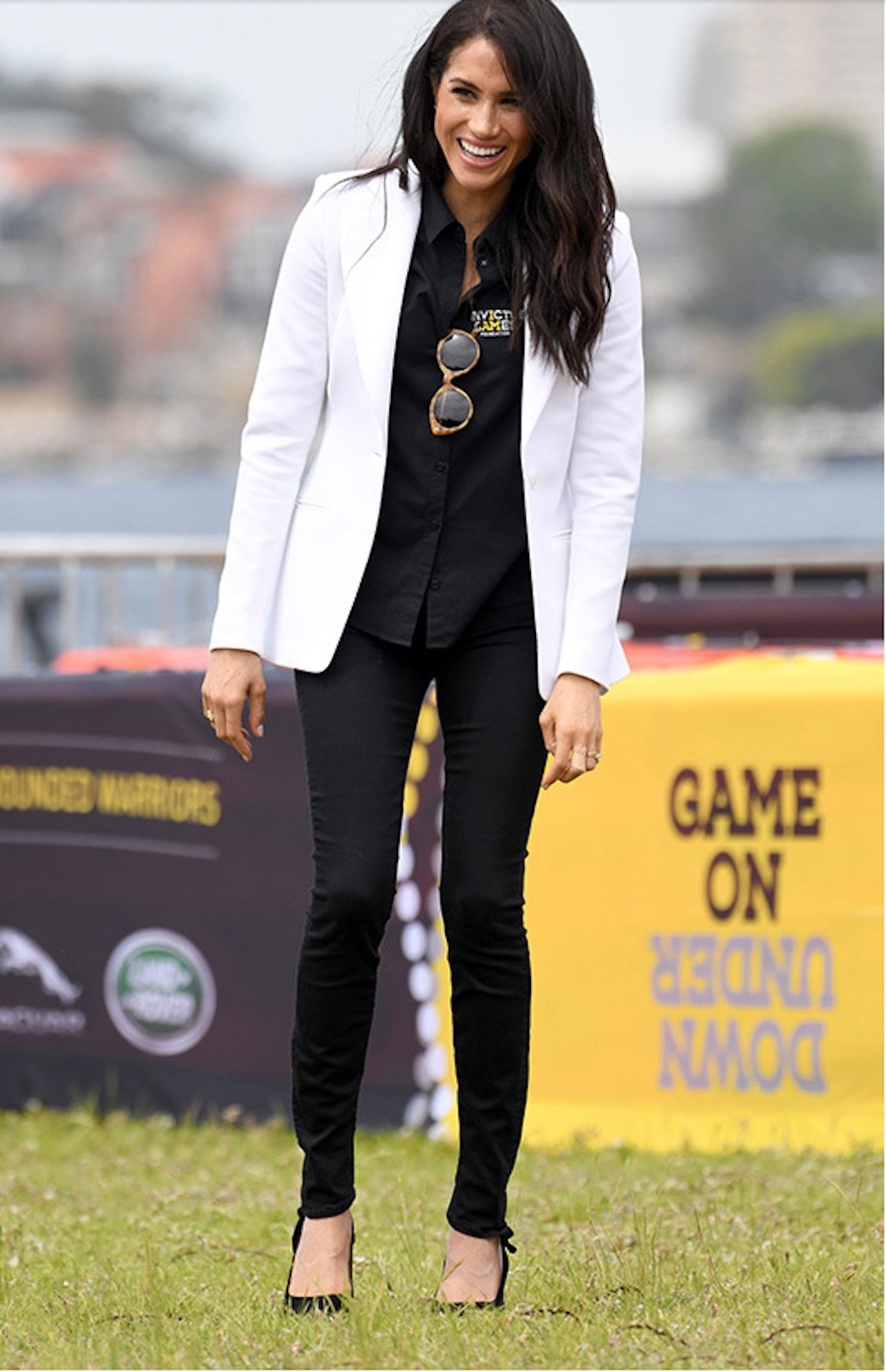 It was another beautiful black-and-white look for Meghan Markle during her royal tour of Australia, Fiji, Tonga & New Zealand with Harry. While not strictly a suit, the Duchess of Sussex sported a white Altuzarra Acacia blazer, black skinny pants and an Invictus Games button-down for the Invictus Games Sydney 2018 Jaguar Land Rover Driving Challenge on Cockatoo Island. 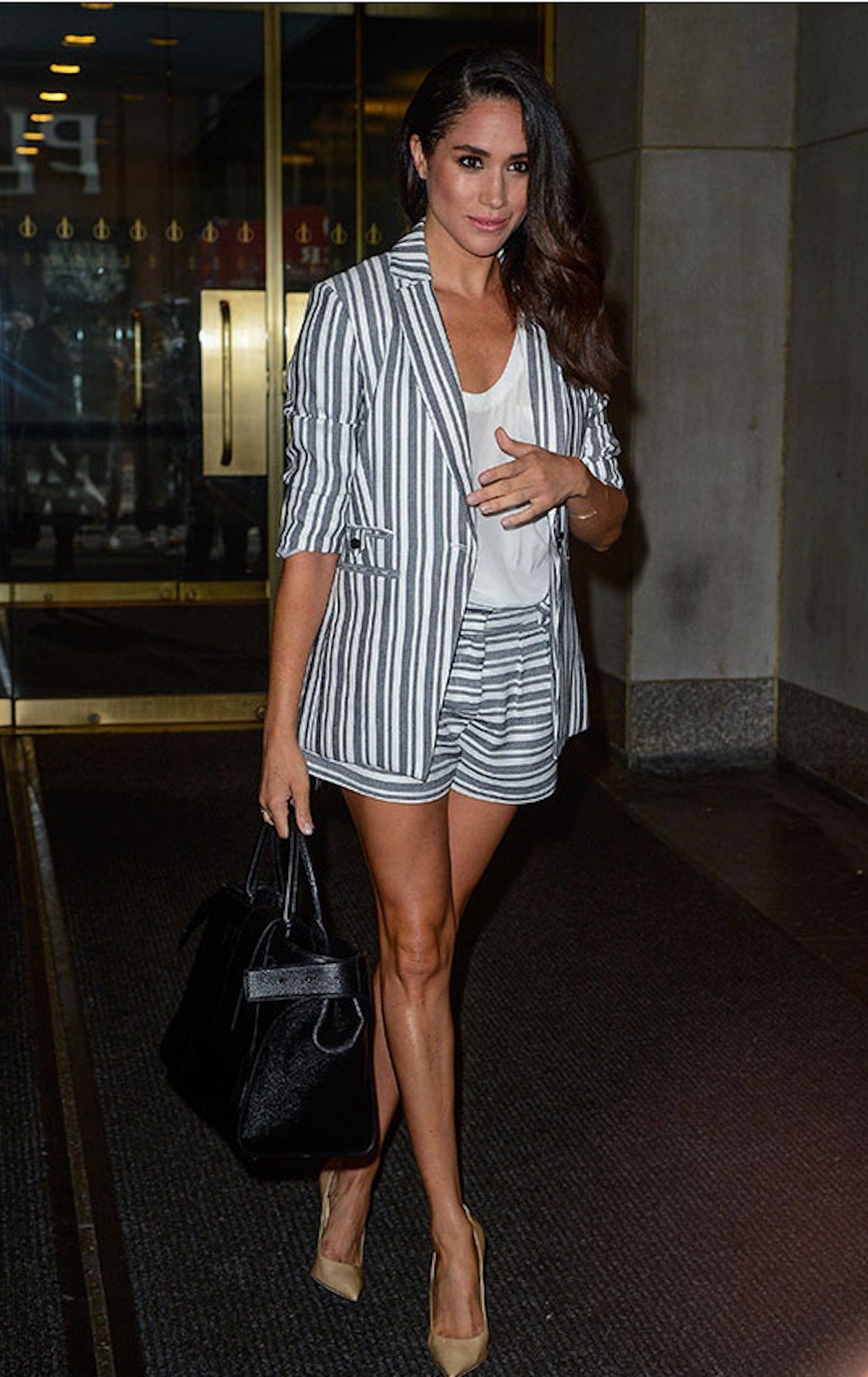 During her days as an actress, Meghan Markle embraced a trendy striped short suit as she left a taping of the Today Show at NBC Rockefeller Center Studios in July. Meghan rounded out the look with a large black bag, white T-shirt and beige high heels. 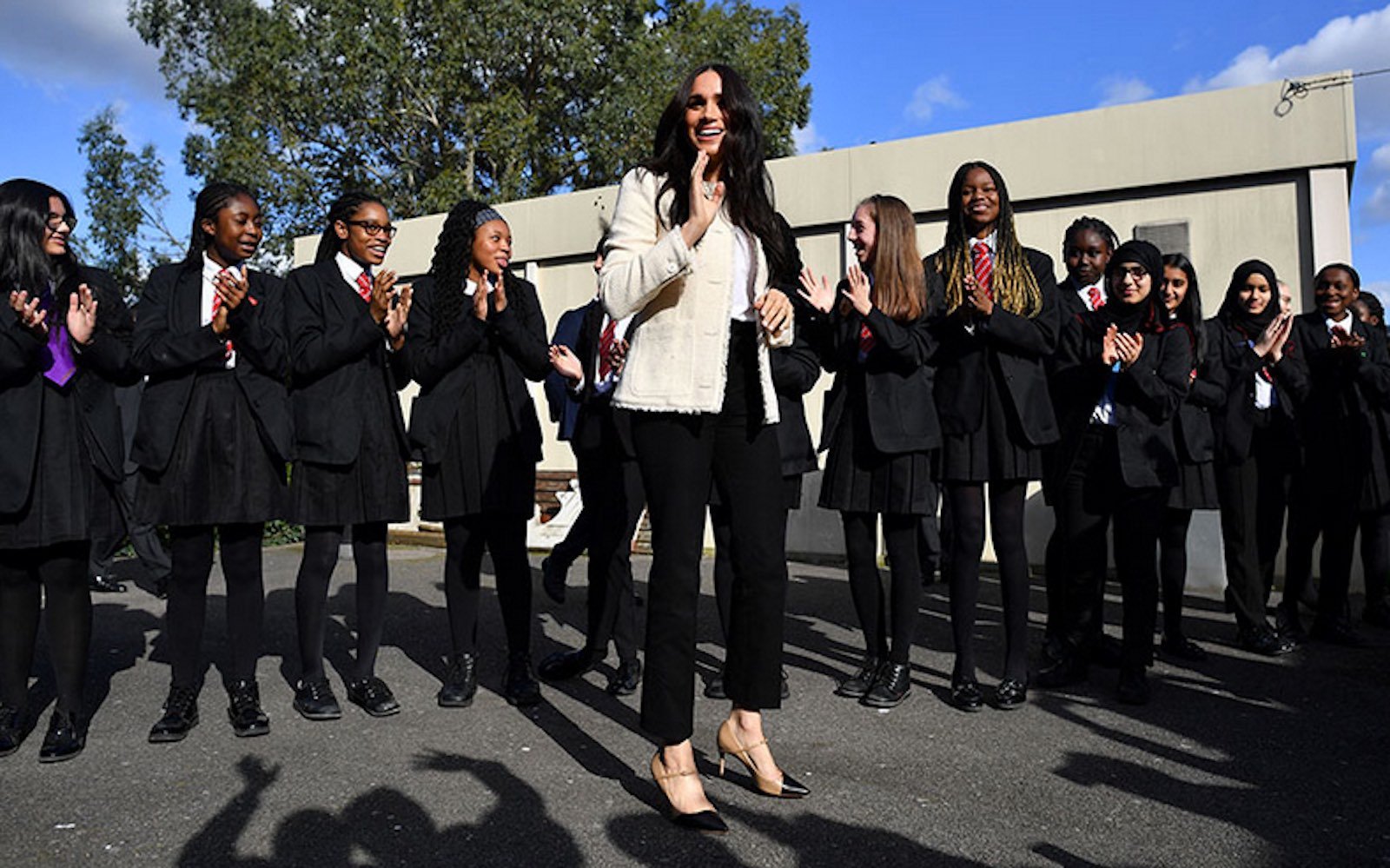 Meghan Markle visited the Robert Clack Upper School in Dagenham, London ahead of International Women’s Day in March. The mom of one wore a broken up suit consisting of a ME+EM cream fringe jacket, black slacks, a T-shirt by Lavender Hill Clothing and two-tone heels from Jennifer Chamandi. 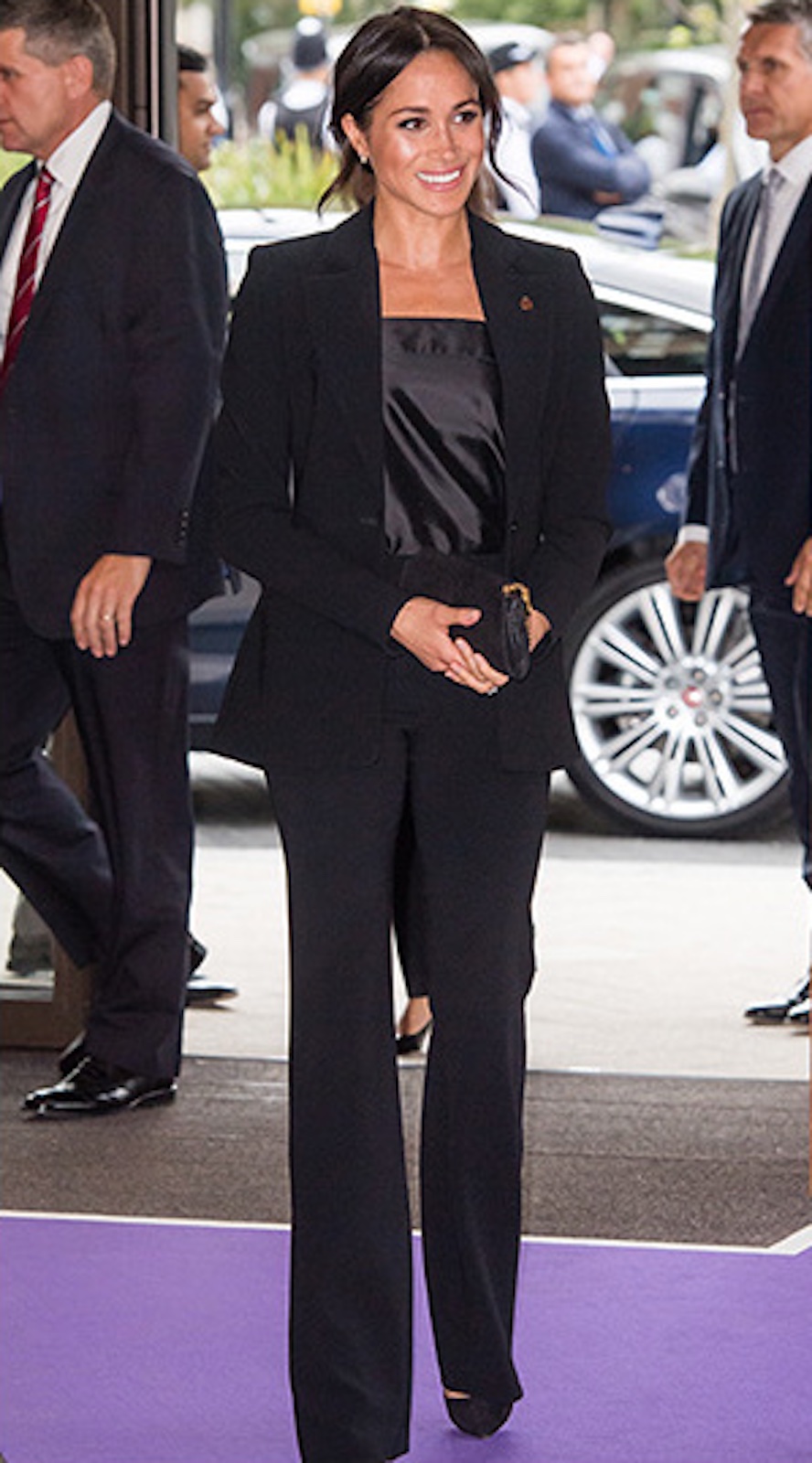 At the 2018 WellChild Awards, the duchess donned a flowing all-black number. The two-piece pant suit was courtesy of Altuzarra and the matching silky camisole was from Deitas.

At this point, it’s no secret that we’re royally obsessed with Meghan Markle’s style. From her first public outing with Prince Harry, the Duchess of Sussex has crafted a minimal, chic, and ultra-modern royal wardrobe. Whether she’s wearing a little black dress or a designer suit, the royal brings a bit of understated elegance to all of her looks.