Rachel Myers is an award-winning filmmaker, Time-Warner-150 Artist and Tribeca alumni. Her film Wendy’s Shabbat qualified for Academy Awards and was broadcast on PBS. She is a winner of Ovation, NAACP, Broadway World and Streamy Awards, and inaugural recipient of the Shondaland-Women’s-Directing-Mentorship, Sundance Co-lab, and a nominee for the Lynn Shelton Grant.

As she continues to redistribute her vast resources of knowledge across over 150 award-winning projects, we can only see more awards on the horizon for her and those she chooses to work with. With such a long list of accomplishments, it’s a huge privilege to spend a few moments with her to take a peek into her journey and gain insight into how she works.

Tell us about your history in film. How did you start your journey?

My journey in the film industry began with theatre. I acted as a child and I went to drama school and studied acting, directing and design for theater and film. I got my first job on a big movie working in the art department on Tim Burton‘s “Corpse Bride” before going to the Yale School of Drama for graduate school.

I’ve been working in the film industry for 20 years, behind the scenes mostly as a production designer before I began directing five years ago. I love telling stories as a filmmaker and the collaborative process of making movies with other artists

Julie Taylor was a huge influence for me coming up in the industry because there were so few examples of women directors and interdisciplinary storytellers creating work that I felt like reflected my own interests as an artist, especially coming from the theater world.

I got to meet Julie in London at the Royal National Theater when I was 19 and it made a tremendous impression. We shared a moment and a tear when I told her how much she meant to me as an artist and storyteller and she wrote to me and said “Rachel, to Passion Yes! love Julie!

You received your MFA from the Yale School of Drama. What did you learn during your studies that proved to be the most useful in your career?

That everything we do is in service of the story. As a director, designer, and artist it’s always a balance of how to use the right tools to support the work and to be honest and truthful as a storyteller. Authenticity is really important to me and telling stories that are accessible and personal for an audience. I’m a very politically minded person and as an artist and filmmaker, I feel a responsibility in my work to share messaging I care about and believe in.

What was the inspiration behind your recent film, Wendy’s Shabbat?

I had visited and discovered the story of Wendy Shabbat about a group of Jewish seniors celebrating the Sabbath at a Wendy’s fast-food restaurant. I thought that it was beautiful because it was about the desire for people to find connection and community in unlikely places.

It was my first film, and I was floored that it had such a wide-reaching impact and resonated with so many people and I think that’s because it was honest and personal, and it moved people. I love telling stories about unseen worlds and shining a little light into lives we don’t normally see portrayed.

Wendy’s Shabbat qualified for the Academy Awards and was broadcast on PBS! Were you taken aback by the glowing reception to the film?

It started when Tribeca called and invited me to premiere the movie in New York at the festival and as a first-time filmmaker at that time, I couldn’t believe that our little movie was selected out of many thousands. Then the trailer for the film went viral and overnight we had hundreds of thousands of viewers.

It was amazing because people reached out and told their own stories about how it affected them and how it was personal and asked if they could visit the seniors in the movie at Wendy’s.

It was so touching. When you’re making something on your own, you make it because you care about it, but it was unbelievable to see the impact that it made and when it went and screened around the world. It was broadcasted on PBS and topic, as well as Academy Awards qualified -just for telling this little story. 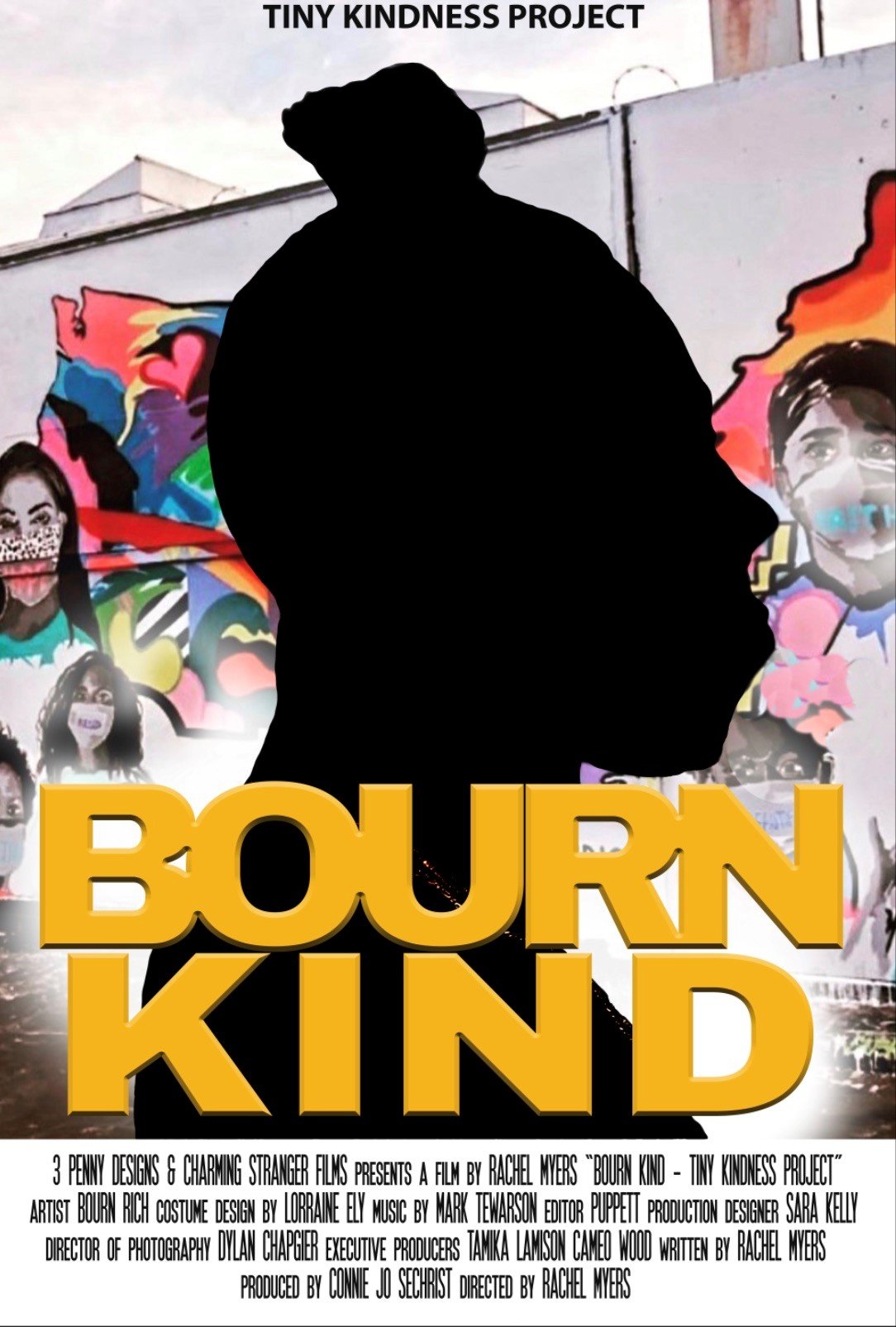 What is the biggest thing you want viewers to take away from your new film, Bourn Kind?

Bourn Kind came about early in the pandemic from my own experience of people distancing and isolation and the political climate and tension we were feeling with the Black Lives Matter movement, the election, and this moment of cultural reckoning in American identity.

I did a little drawing with the idea of the messages on masks and wrote a script with the story and then Todd (BOURN) and I met through the Black Jewish Entertainment Alliance, and I thought of him as the missing ingredient that brought that story to life in a personal and authentic way.

His work as a black Jewish man is personal and political and I realized immediately that he was the perfect partner and friend for the project. I want people to realize from the film how small and easy it is to acknowledge and see one another.

It’s my values and how I was raised, and it’s important to me to look past bias in how we move through the world as people, because making small gestures of love, respect, recognition, and kindness changes how we see one another and ourselves. I do believe this smallest thing can change our culture and our world.

Do you find it more rewarding to tell stories that you have a personal connection with?

Independent filmmaking is a labor of love. The only way to work and push onward- tirelessly for the amount of time and the struggle it takes to make a film is to be passionate and care deeply about what you are saying in the work. Some people give to the world as teachers or doctors, artists do the same by making art.

Do you prefer acting or directing more, and why?

I love directing and filmmaking and building a team to tell a story from the ground up. My introduction into this world through acting was a great entry because it made me understand and respect the challenges that actors face in bringing authenticity to the characters. I haven’t acted for many years, and I don’t see myself acting again but that experience made me who I am as a director.

Do you feel your experience as an actor has informed your approach to directing, and vice versa?

You’ve also worked as a designer. How does designing differ from directing?

As a production designer you build the world of a film from the ground up with the director and cinematographer and I’ve always thought about locations as casting the feel and experience of your movie. Starting my career as a designer gave me a great foundation for the process and is a tremendous asset now as a director.

We are often our worst critics. Do you ever go back and watch your earlier films? How do you think your style has changed?

Because I just started working in the industry in other jobs on film sets, I didn’t have the opportunity that many younger filmmakers have when they go the film school route to try things out and experiment.

Filmmaking is a team sport and it’s also expensive and so my work in the film industry in other roles was what allowed me to make my first films directing by collaborating with my friends. I think I have the same experience that many artists have when you look back on old work. The feeling that you just want to make new pieces that represent where you are now and your voice in the moment.

Do you allow for improvisation on the set, or do you prefer sticking to the script when you direct?

I love improvisation and I love performance that feels organic. Bourn Kind is part documentary and part Verité filmmaking. I love that intersection of using real people in their lives to make for a really accessible performance. When I work on scripted narrative projects, I always love to have the actors play and experiment on set. The camera sees everything, and the best pieces are often a moment when people let their guard down.

I can’t go into too much detail- but I do have a few feature film scripted projects that are in different stages of development and casting. One of my films, Dear Stranger, received a Time Warner 150 artist Grant and it’s been very exciting seeing how the project has grown and changed as we get closer, and more people get involved.

I think it’s an exciting moment for young filmmakers. I’m in my 40’s and didn’t have easy access to tools to make things that younger creators do now. iPhones, the internet, and YouTube videos offer a wealth of information to make small things on your own. I remember being in college taking a video editing class where it took all night to render a 1 GB file. Every time I see cheap terabyte drives, I remember being in the lab at 4 o’clock in the morning waiting for a movie to process.

Well, that’s an impossible question because I love musicals and dramas and comedies and every time I watch a movie I learn something different from the filmmaker. But I would say some old favorites are The Piano, Stealing Beauty, and I really loved Céline Sciamma’s recent film, Portrait of a Lady on Fire.

What projects would you like to see Rachel take on next in this new political climate? Let us know in the comments!