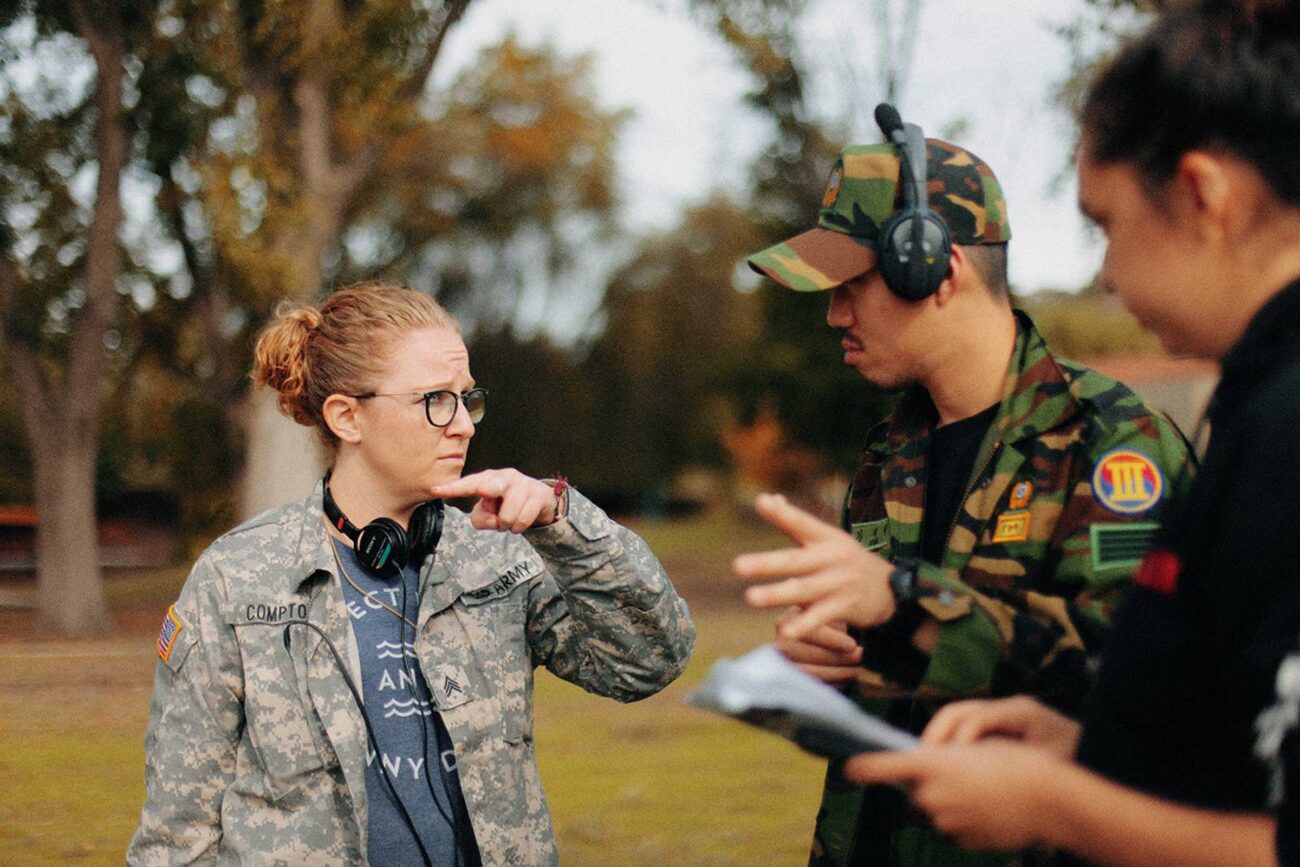 Different energy: Get to know ‘Guide On’ director Paige Compton

Paige Compton is a name you need to know. She is a recent graduate of the American Film Institute and served in the US Army as an Audio/Visual Director for the offices of the President & Vice President. Her unique perspective & extensive training lend a precision to her work that is seldom seen.

Compton’s short film Guide On is an exciting meditation of life in the US Army. It focuses on a young woman’s first day in basic training. Her determination & ambition is challenged by the rigorous training regimen.

Film Daily was lucky enough to sit down with Paige Compton to talk about her short film Guide On, filmmaking, and what the future holds. 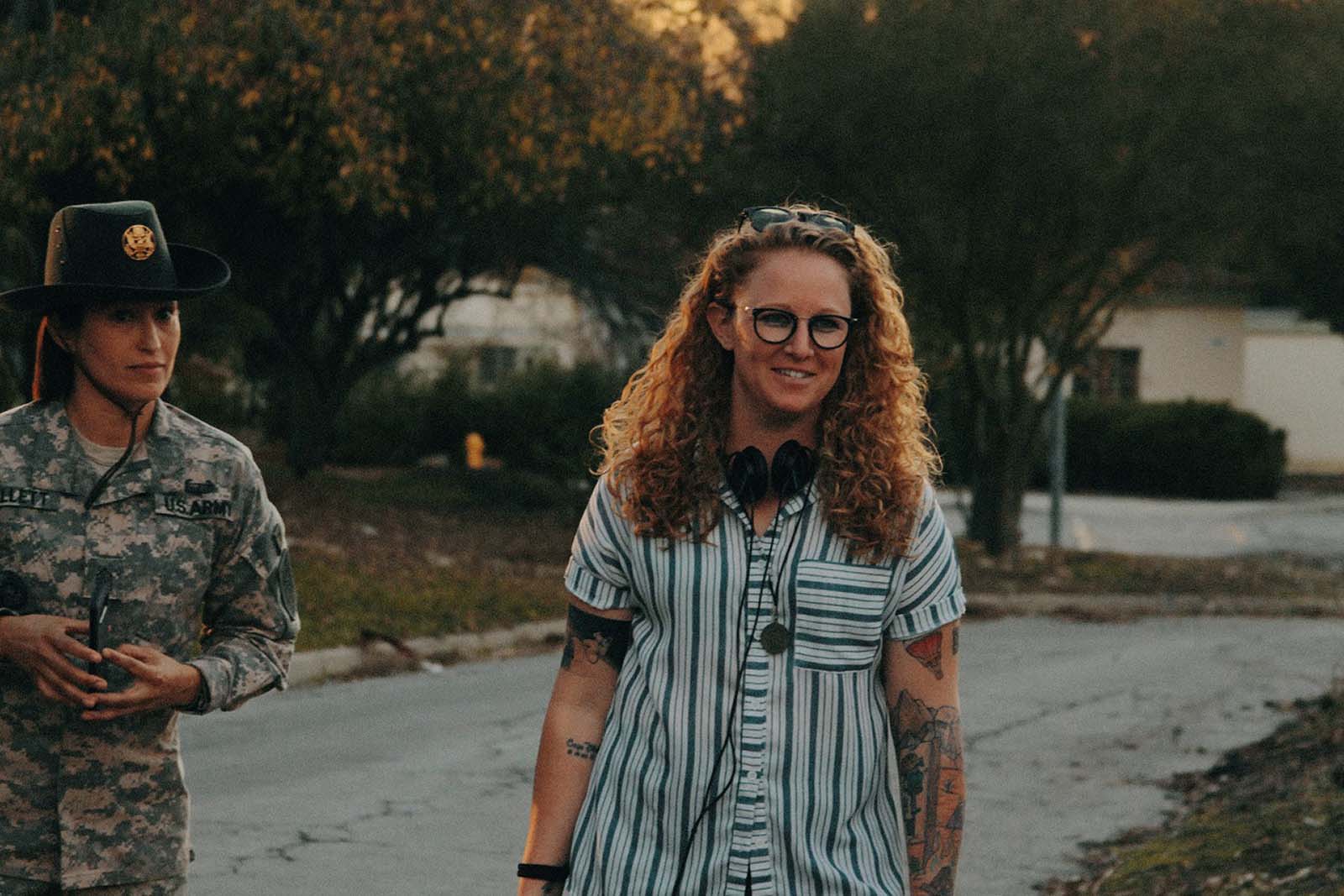 When did you first know that you wanted to be a filmmaker?

When I was 7 years old. I’m not exactly sure if it was my Dad taking me to see Jurassic Park or watching the BTS of the Foley artist at the end of the Twister VHS tape, but I was hooked.

What movies inspired you early on?

Indiana Jones Saga, Jurassic Park, The Rocketeer, The Indian in the Cupboard, Hook, Jumanji, Zorro (1998), Black Beauty, True Lies, The Lion King, Pirates of the Caribbean: The Black Pearl and probably more I can’t think of right now. I was a 90’s kid. lol! 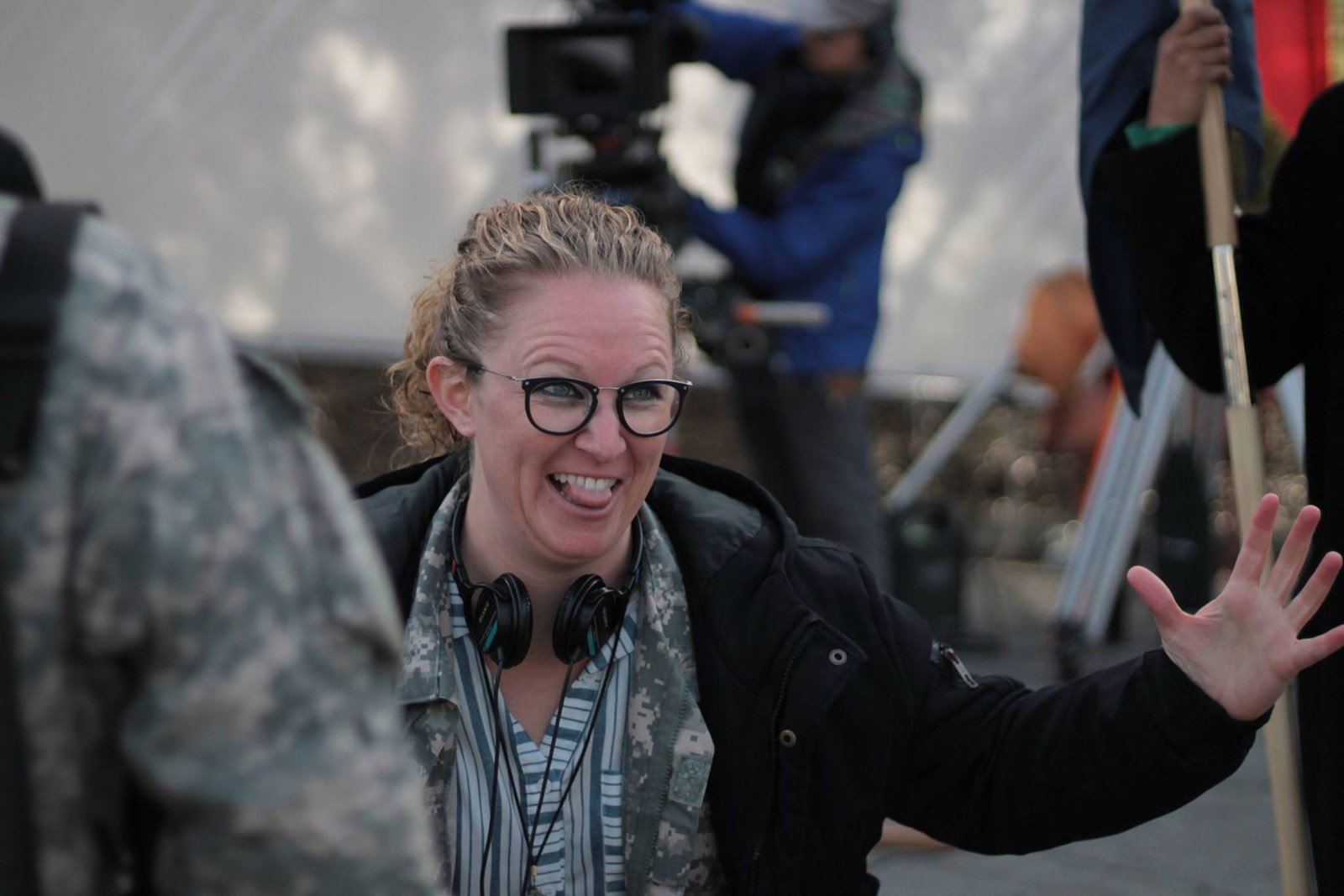 You are a graduate of the American Film Institute. How has studying film on an academic level affected your craft?

I feel like AFI took the equivalent of what I would have learned in 10 years if I had done it without film school and crammed it all into 2 years. There is a huge difference in the way I understand filmmaking and approach it now. It’s amazing how much I didn’t know two years ago, compared to how much I know now. So many tools I have been able to add to my directing “toolbelt.” 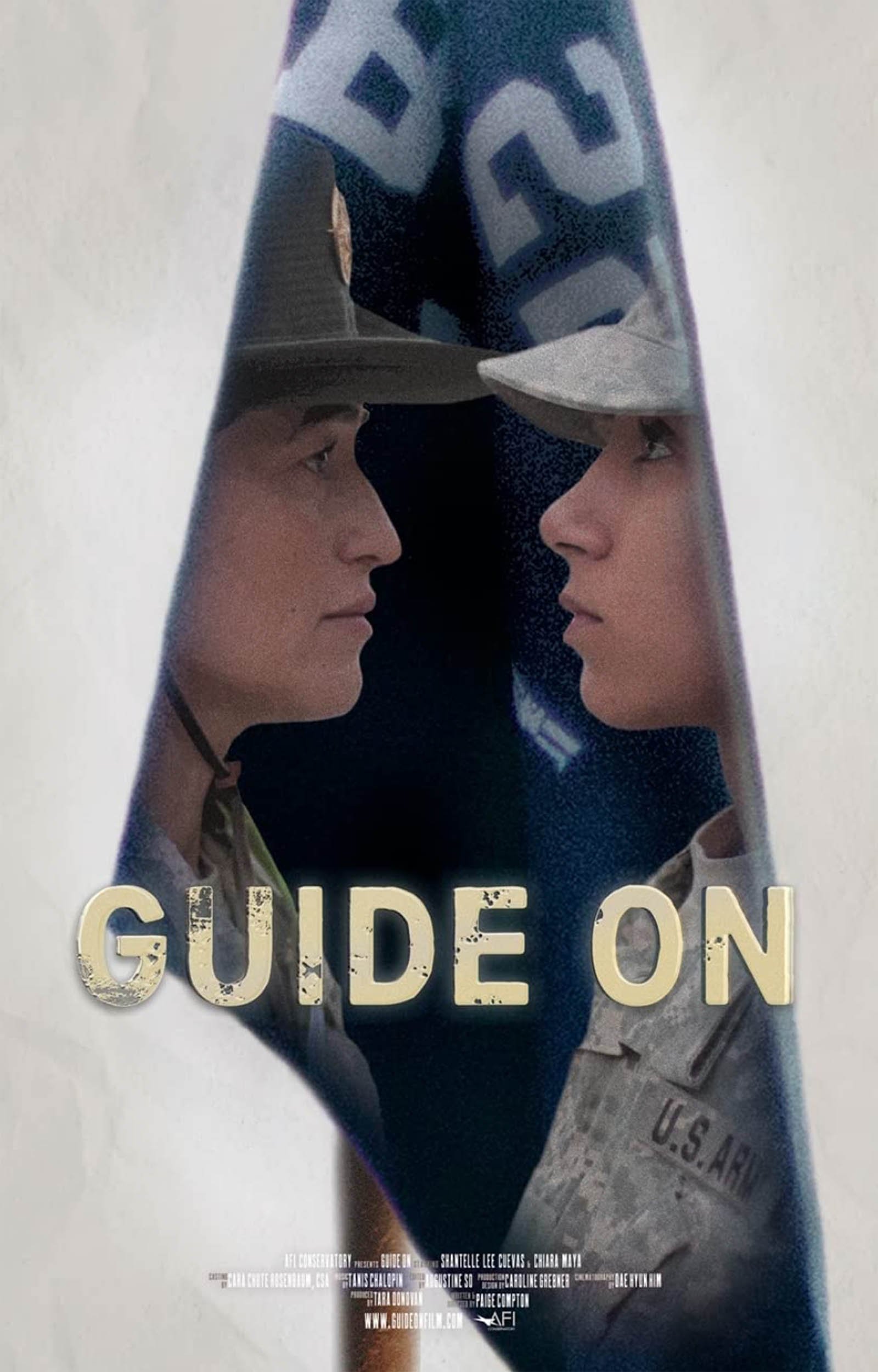 Your current project Guide On follows a woman on her first day of basic training. How much of the story comes from your personal experience?

This film is loosely based on my exact experience of wanting to carry the flag during my time in basic training. There are lines that the drill sergeants say that are pulled directly from my experience, but mostly the scenes are hybrids of things that happened to me just manipulated for the screen.

What impact did your time in the Army have on your filmmaking?

Well, the main reason I joined the Army was to learn how to make films and gain that experience. My Dad didn’t want me going to film school, so I found a job in the Army that taught all the technical skills of filmmaking and took that route instead.

To state the obvious, he was a lot less happy about me being in the Army. But you can’t say no to the government; that’s breaking the law. So off I went to learn filmmaking skills, have an adventure, make some mistakes, and live to tell the tale. 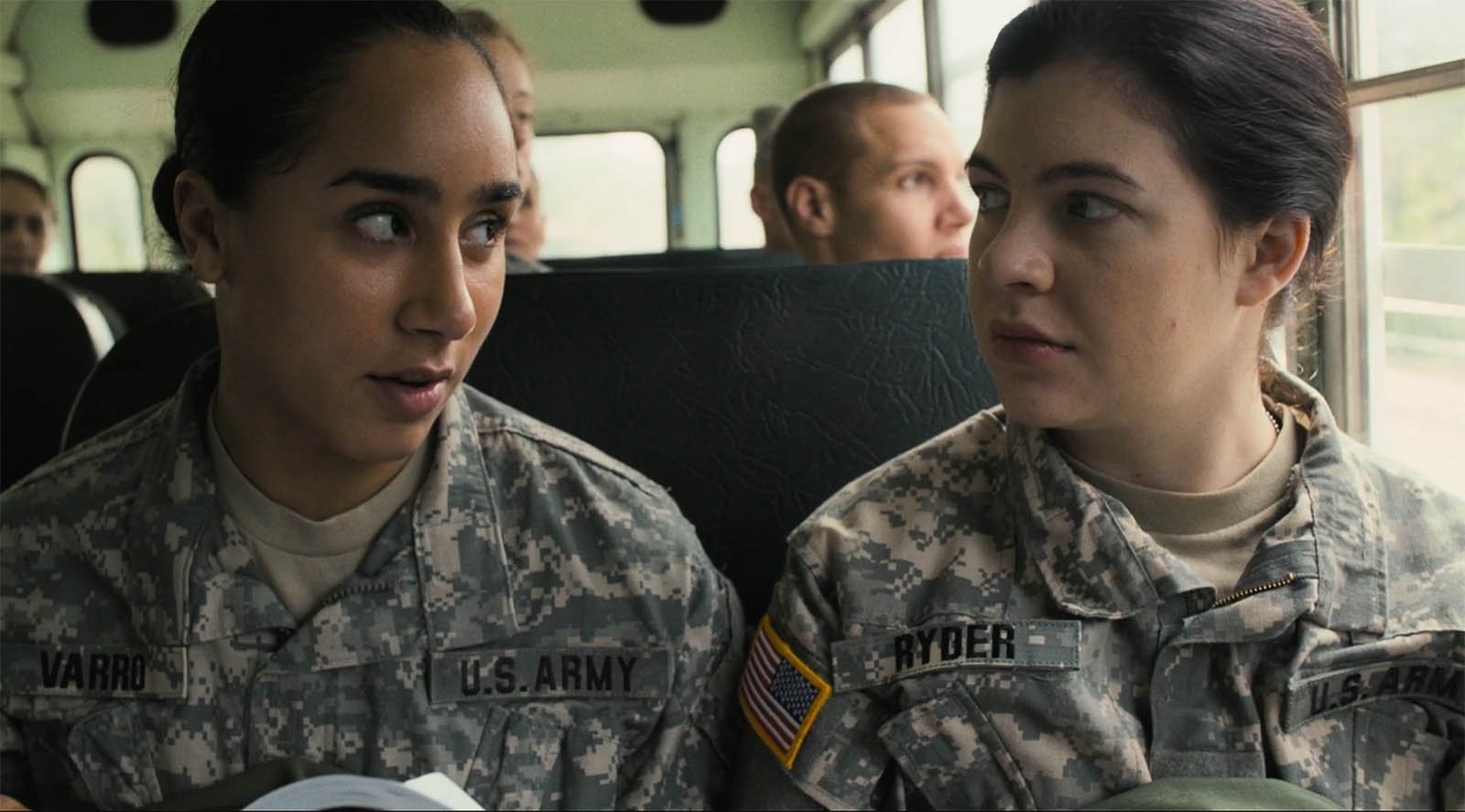 What do you want Guide On to communicate to your audience?

Follow your dreams, man. For the love of god … go do what makes you happy. Fight for it. Don’t stop moving towards that goal. No matter what happens along the way. If you are passionate about it, just go do it.

For me it was two things:

1 – Narrowing down a personal story to its most basic and powerful elements. That took time. What may mean something to me, may not read to an audience who was just introduced to this world.

2 – Choosing my shots. I had some scenes where I knew exactly what I was looking for, but I had others that felt visually vague. My DP, Dae Hyun Kim, really came through for me. He took my intentions for the scenes and came up with brilliant shot suggestions. From there we built the visual language out. When we added the second camera I really leaned on him and trusted him with the composition of the B-Cam. Dae is incredibly talented and we both click creatively. So it works pretty smoothly. 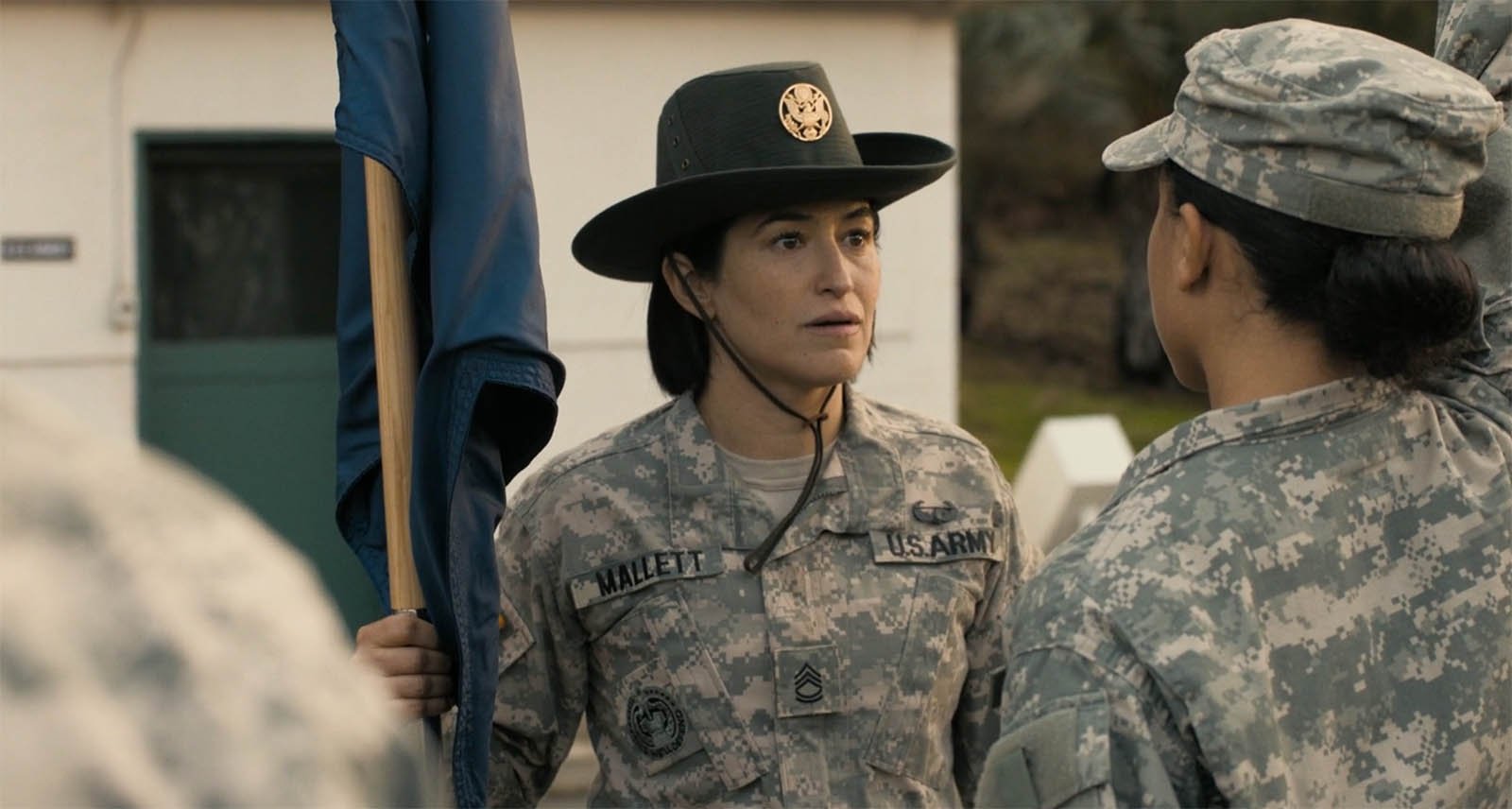 Do you prefer directing films that you had a hand in writing?

It’s easier to direct something I wrote because the story is already living in my DNA by the time I get to pre-production. But I LOVE working with a writer. I have worked almost every job that exists in filmmaking in some form or fashion and writing BY FAR is the hardest part for me.

It’s so much creative energy and problem solving. And it’s so important! It’s everything. It’s the foundation of every single decision that’s made from there on out. So working with a writer is a blessing. Haha! 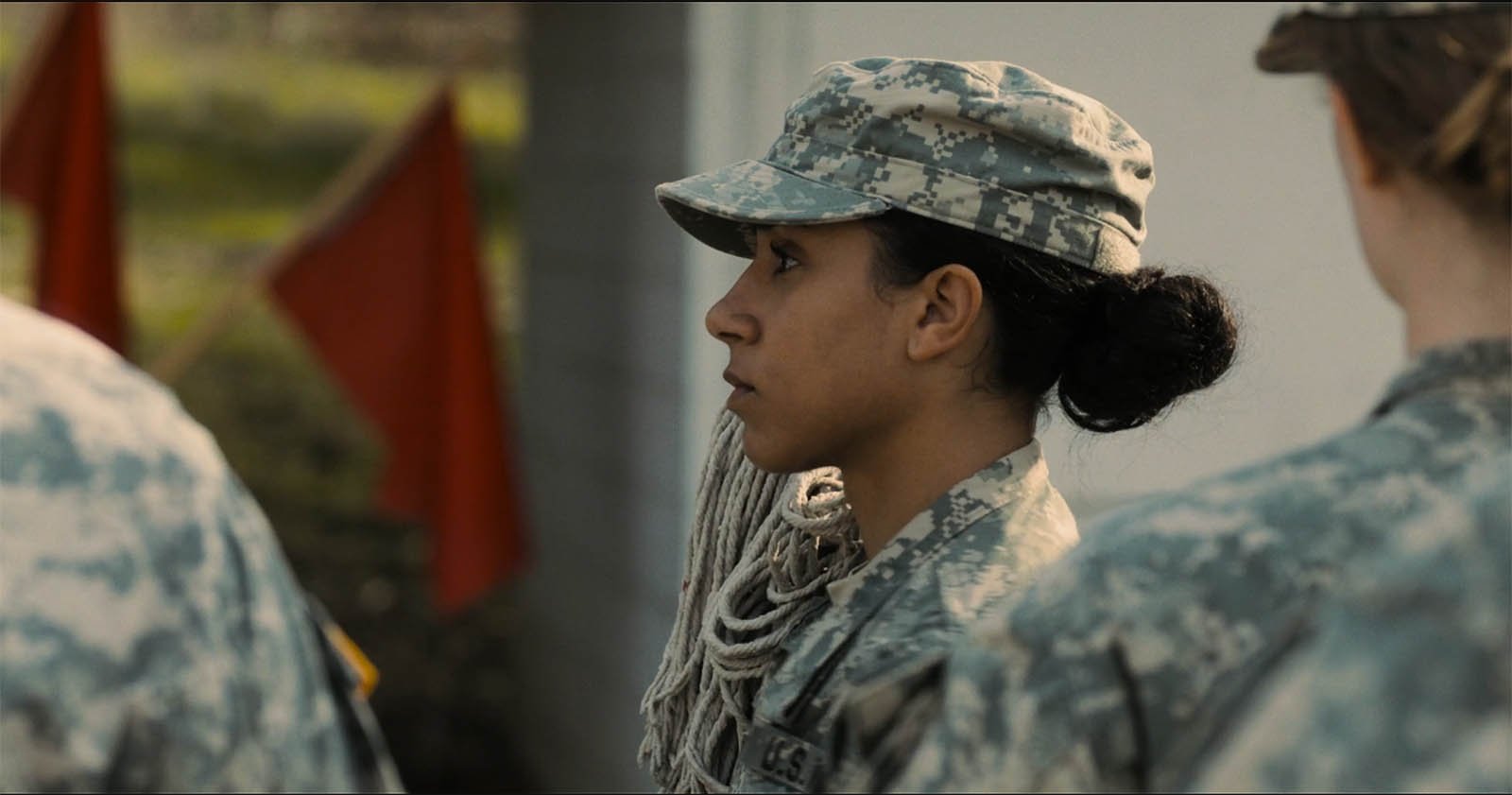 You’re currently writing some future projects. Could you tell us a little about those?

A feature based on another life experience … and that’s about as far as I can go with that description. Also, a TV show based on more of my experiences being a non-combat soldier in the US Army. There is an entire world of stories out there that are untapped and I mean to tell them from first hand experience.

Each project requires different things. Different energy, different research, different prep, but there is a basic way I approach each film. Whether I wrote it or not the first step is to identify the core message of the story. That is essential in all my future decisions. If I didn’t write it … I read the script a handful of times, then I start my own breakdown of characters, arcs, emotions, wants, needs etc.

This part of the process usually coincides with me also making a playlist of music that feels like the story. Once I feel like I understand the characters and story, I will immerse myself in films of similar stories and have a movie marathon. Then I create my look book and start working to assemble my team with the producer. 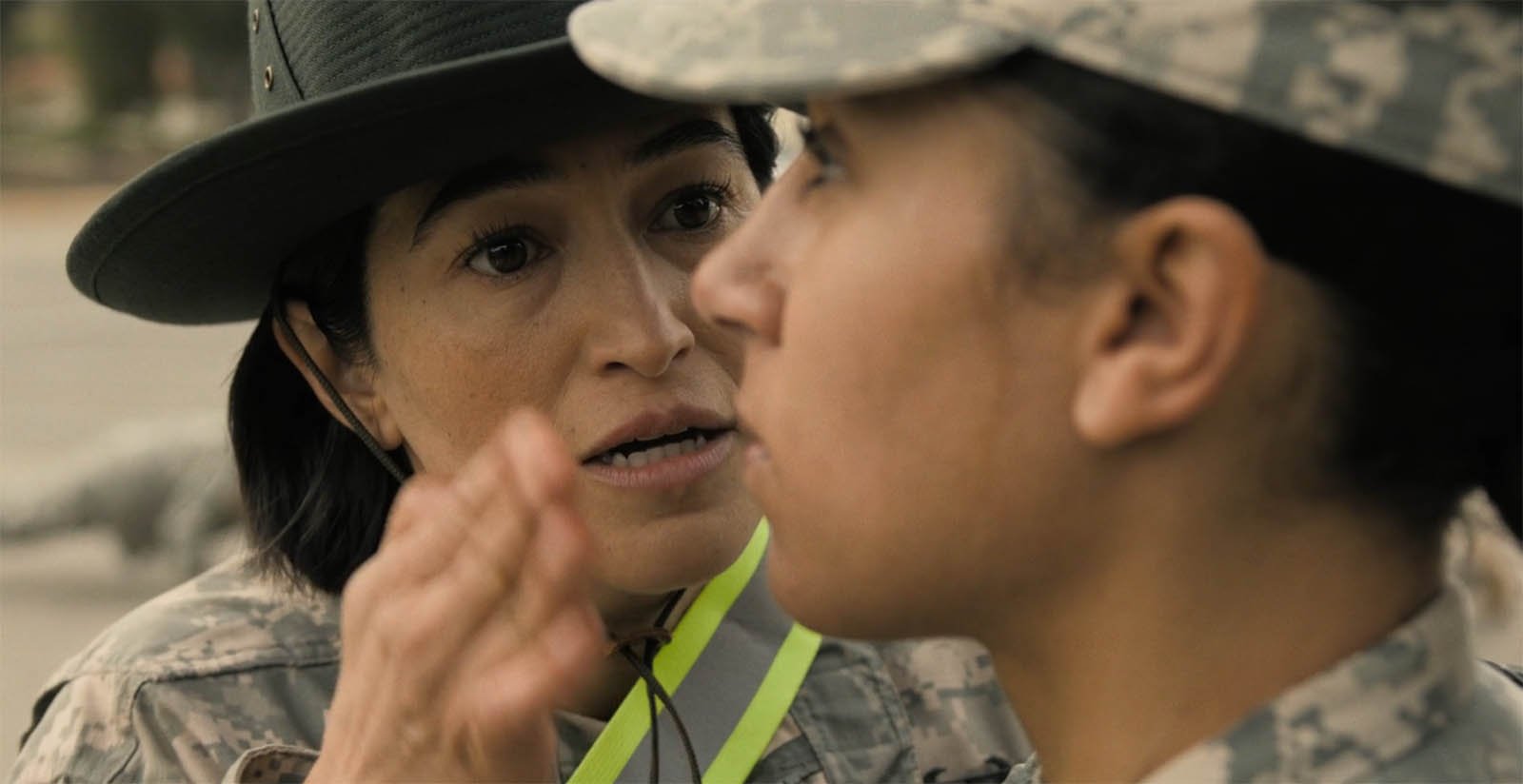 Music is INCREDIBLY important to me and my process. When I create my playlist for the story, the music is inspired by the characters and the story itself. So every project has a totally different playlist from the last.

What part of the filmmaking process do you love the most?

Working with people. Hands down. I know it sounds cheesy, but it’s true.

Is there any part of the process that you dislike?

All of it. Haha! No but really … I’m so incredibly passionate about filmmaking and storytelling, but there isn’t a project that I have worked on that I haven’t questioned my life choices during the process. Haha! Filmmaking is a grind. It is really hard work. You truly have to love filmmaking … with everything in you … that way the soul crushing, mind melting, heartbreaking moments are a bit more bearable. 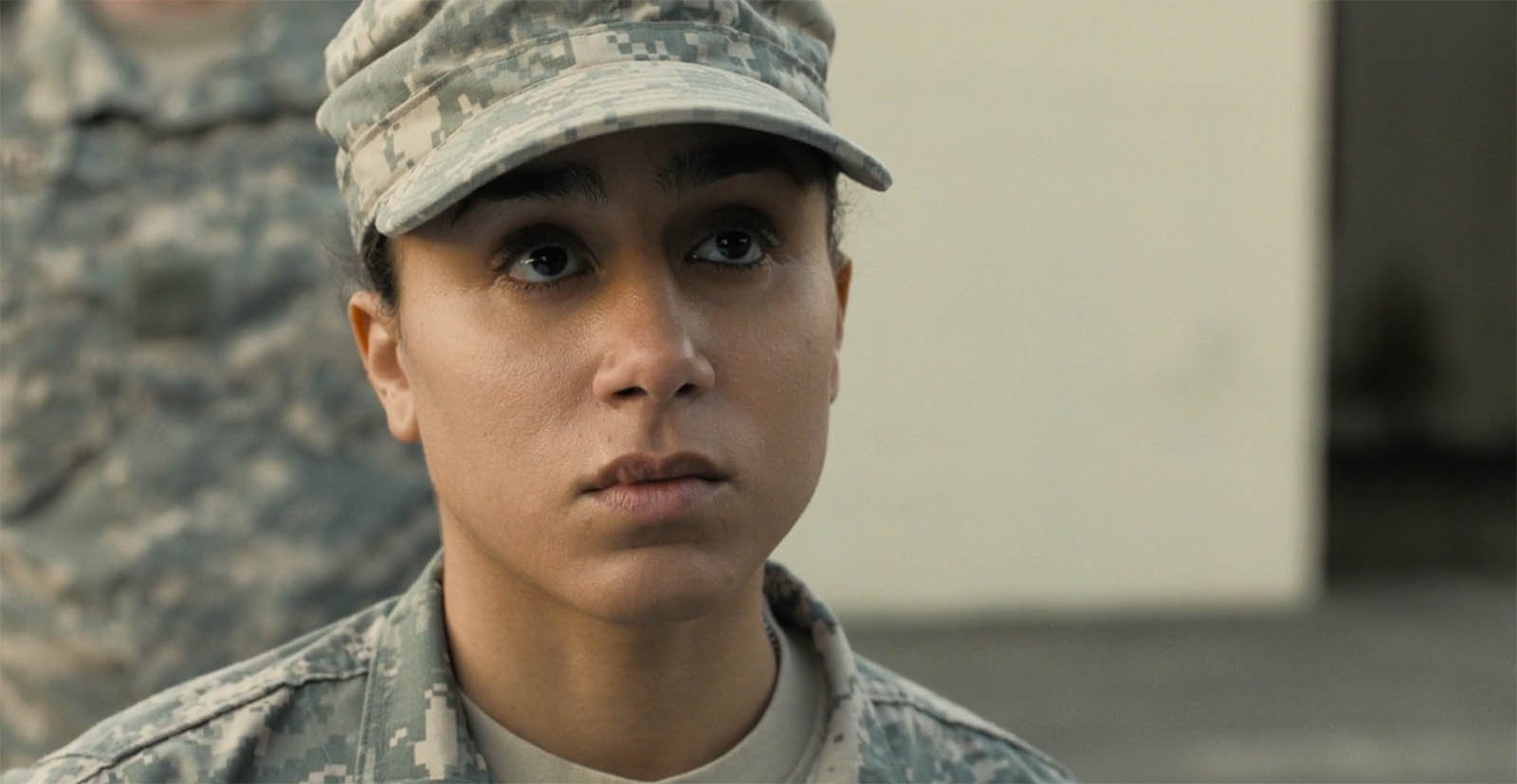 What is your mission as a filmmaker?

Name some important things you want your audience to take from your work.

I just want people to feel inspired to find their truth and do what makes them happy.

What is your five year plan?

My professor would hate this answer but I don’t really have one. I plan to still be directing movies in five years. 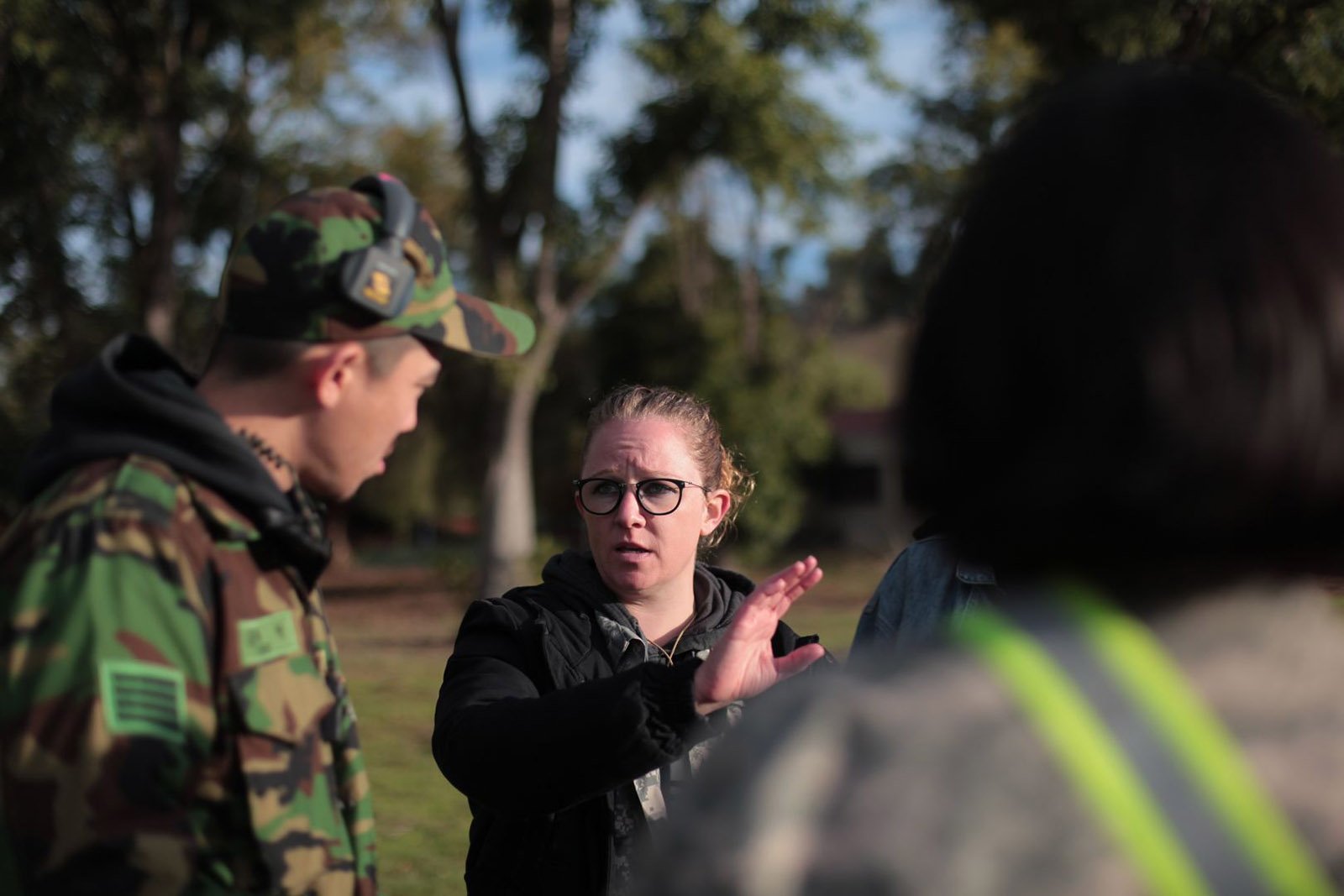 Read books. Any books. Just read them. Audio book it if you have to.

Watch chronological marathons of your favorite filmmakers’ work. You will see the progression first hand.

Go to parties that you’re invited to.

Get on set. Anyway you can. Then shut up and learn.

Know that you don’t know as much as you think you know. 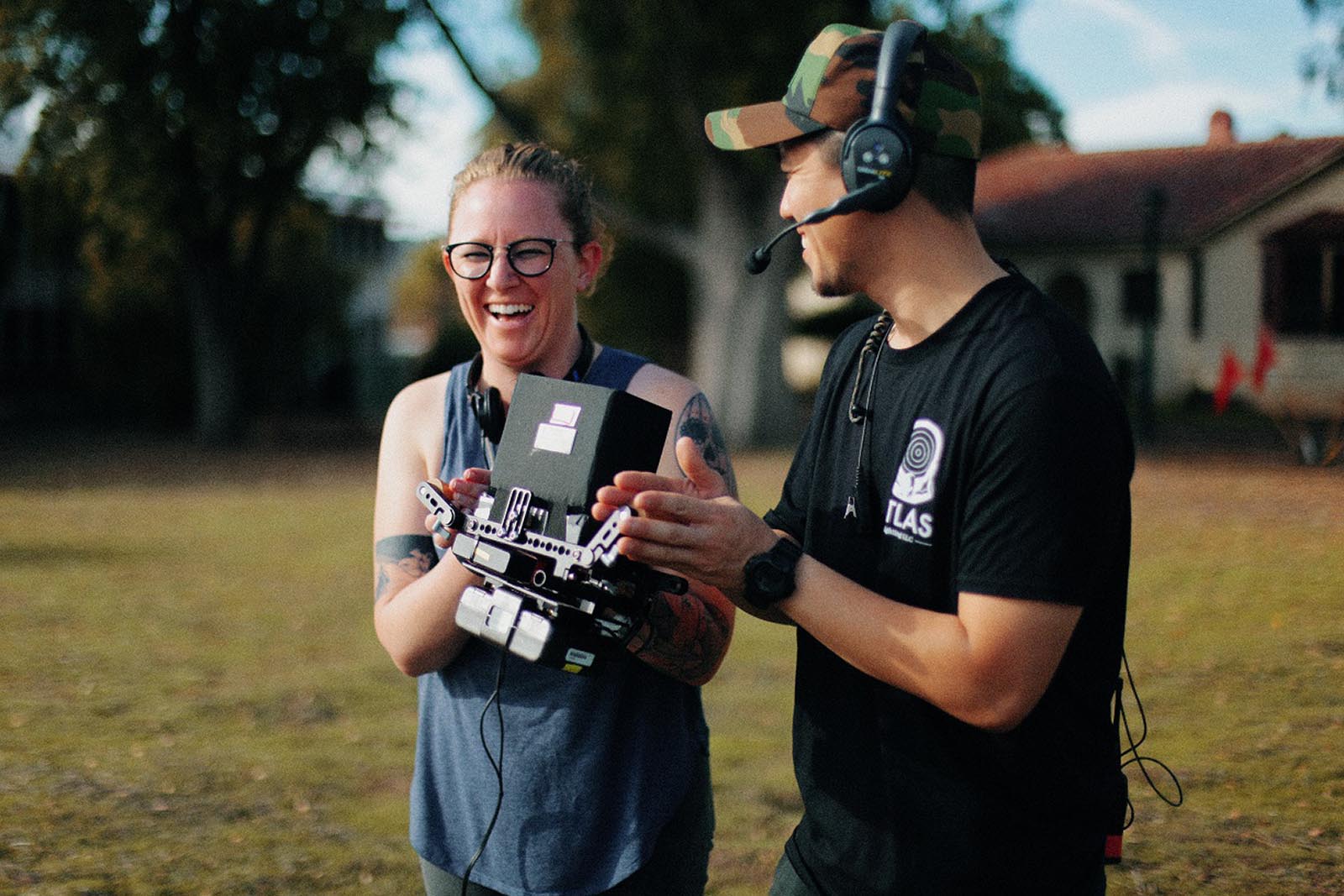 Who are some indie filmmakers we should be paying attention to?

This is a hard question for me. There are so many talented filmmakers out there putting in work. I’m going to give one more shoutout to my buddy, Dae. He is an incredibly talented DP and a very accomplished camera operator specializing in steadicam. He approaches his shots and lighting designs by first understanding the nuances of the characters in each scene.

He challenges me as a filmmaker and keeps me on my toes. He works so hard. I swear everyone knows Dae because he is on every set bringing his A-game and improving the film. He is definitely a cinematographer to watch.

What are five shows everyone should watch this year?

Ironically, as a filmmaker, I don’t have a lot of time to watch things.

So I’ll just put my favorite shows so far that I have had time to see:

I finally watched all of Schitt’s Creek, loved it.

Most of the time, when I do sit down to watch shows it’s to take my mind off of filmmaking. So, I watch a lot of shows about ghost hunting, bigfoot and other monster hunters, paranormal stuff, outer space and science, shows about making swords, blowing glass, or repairing antiques. It’s nice to break away from the narrative structure every now and then. 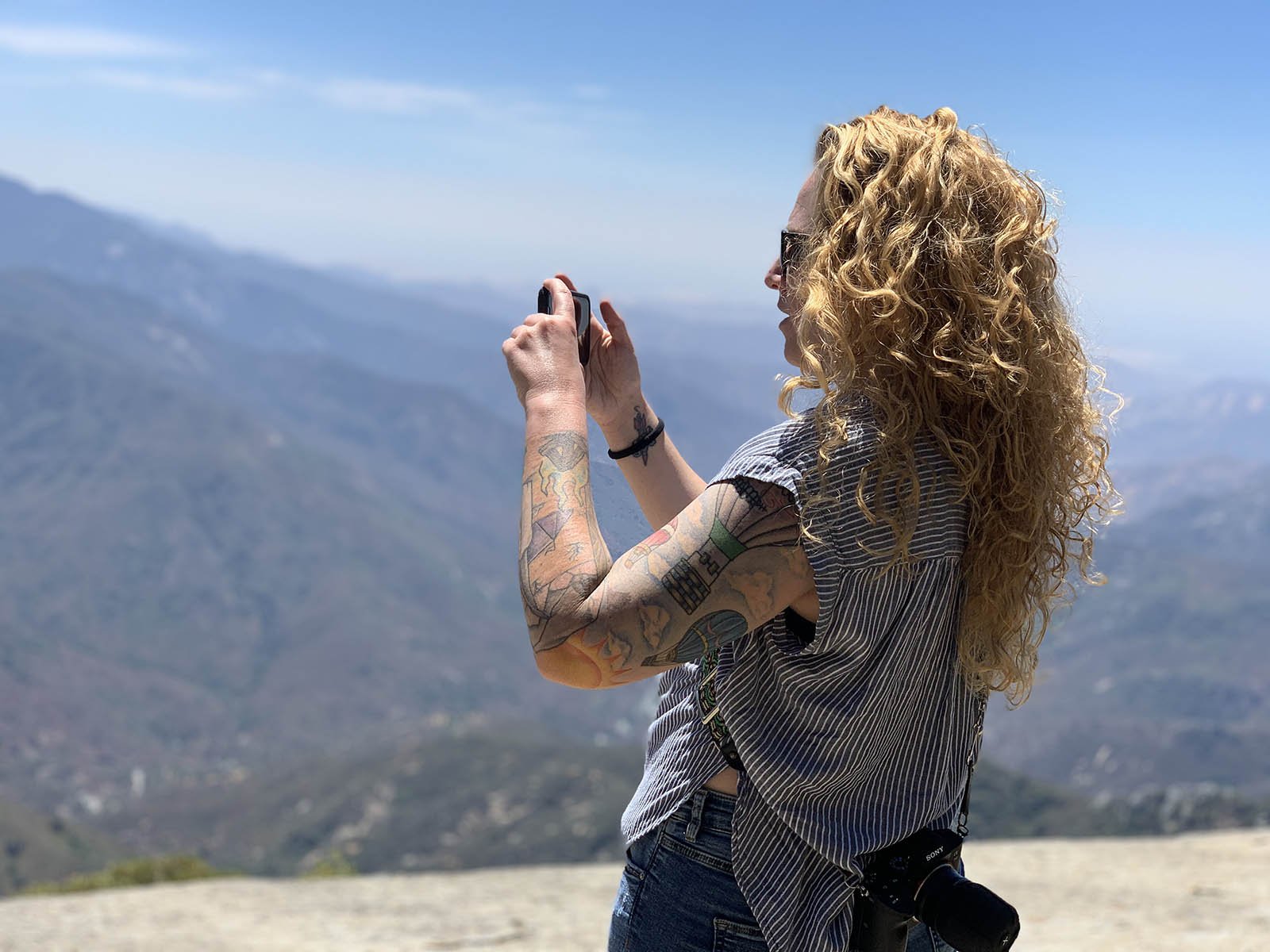 Indiana Jones and the Last Crusade. I believe it is a perfect film and I will fight to the bitter end to defend my stance. Haha! 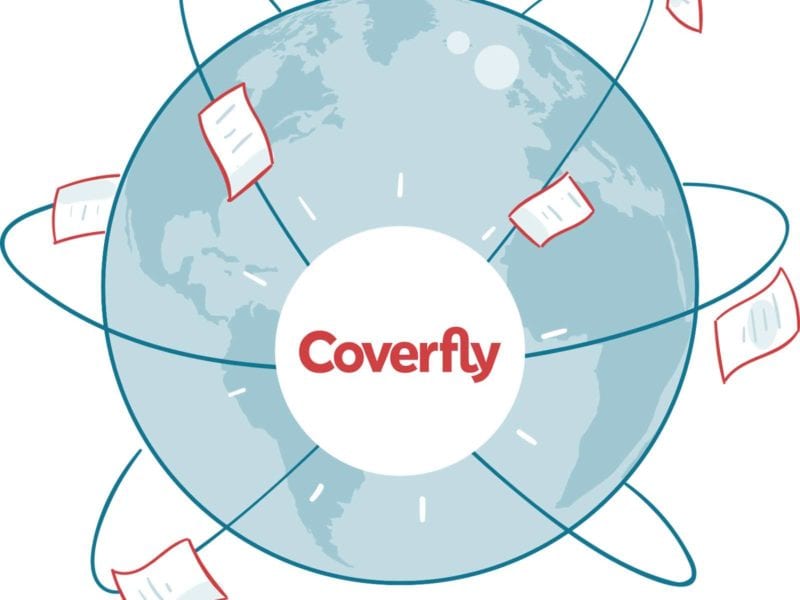