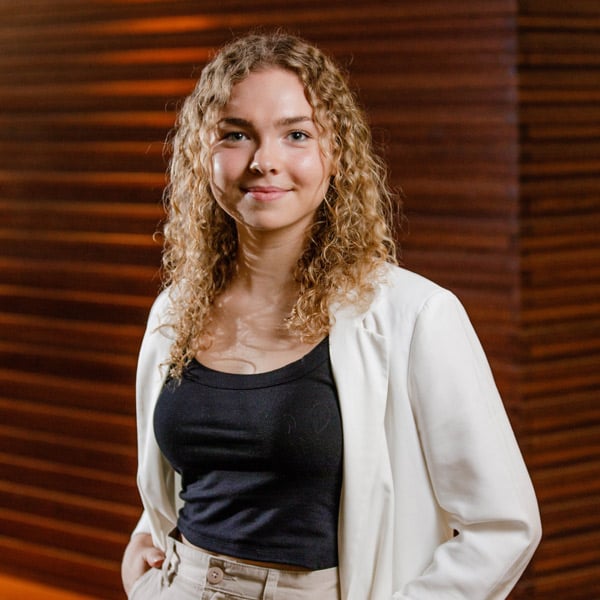 If you have been diving deep into Disney+ like we have, its increasingly likely you have run into Ella Proberts – and what great timing!

Ella Proberts’ most recent work includes playing Daniela, one of the leading roles in the Disney+ Feature Film, The Mystery of Dolphin Bay, entering cinemas Australia wide in September 2022. Prior to this, she played ‘Patty’ in Mako: Island of Secrets on Netflix.

She was trained by the Australian School of Drama and Queensland Theatre and is mentored in acting, writing and production at the American Arts Film and Television Academy. She has experience as an elite gymnast and is proficient in the US and UK accent.

We were lucky enough to snatch a few moments with the young starlet to see what her next moves are, and what she sees for herself on the horizon.

Tell us about your history as an actor. How did you get started?

I got started in my first year of primary school. There was a little community hall near me and quite a few kids from my school went to drama classes there. I convinced my parents to let me go and I absolutely fell in love with it. Everything about drama was just so exciting to me. I kept doing it in primary school and started to get a bit of work at the end of middle school. I couldn’t believe that it was possible to get paid to act!

My parents actually, they were the ones who put me into acting and encouraged me to keep going with it throughout high school when it wasn’t necessarily the cool thing anymore.

I did have a break in my senior year when I decided I wanted to focus on getting into law school instead. When I was finally accepted, I realised I was missing out on so much of the joy acting brought me. I decided to try my hardest to get back into acting, and one of the actors I really looked up to when getting back into acting was Florence Pugh.

You had lots of success as a competitive gymnast when you were a child. Do you feel this success helped you feel more comfortable in the spotlight?

Gymnastics taught me performance under pressure! We had to compete in new arenas pretty often, at times when we were injured or in conditions that weren’t ideal, and I think that helped to build the resilience to just get through a routine, whether it was perfect or not. I think that’s similar to acting and how we constantly need to adapt to different situations and let go of that sense of ‘perfection’.

You’re set to star in the upcoming movie The Curious Case of Dolphin Bay. What initially drew you to the character of Daniela?

Daniela is an interesting one. I liked that she has a bit of complexity to her, because she’s grappling with the change in herself, the pressure from her parents, as well as pressures to relate to both her new and old friends. Although she might come off as a slight antagonist, I think she represents that confusing time of change everyone goes through, often more than once.

I think every character I play has a bit of me in them, so certainly it helps to have a connection with the character right off the bat.

The Curious Case of Dolphin Bay is being released by Disney +. Was it intimidating to work for the biggest movie studio on the planet? How did it differ from smaller projects that you’ve worked on?

This is the biggest project I’ve done so far, and definitely the longest shoot, so I was quite nervous before we kicked off production. When we were filming, the cast and crew all had a welcoming charm, so although I was a bit intimidated at first, they made set such a fun and warm place to be.

Christine Luby, the director, made sure we felt like we could play around with our characters and relationships, so it ended up being a really safe set and such a fun environment.

You’re entering your second year at the University of Queensland as pre-law. Has it been difficult to juggle schooling with your acting career?

It can be a challenge at times, especially when I wasn’t sure whether I was really passionate about what I was studying – this is particularly when I was studying law (in Australia we don’t have pre-law degrees, you go straight into a fully credited degree as an undergrad!).

Studying law is incredibly objective, analytical and rigorous. I threw myself into it and ended up making it onto the dean’s list, but I didn’t have any of that same passion in it that I have for acting and storytelling.

I like to be learning and investigating and telling stories, so I really wanted to change to a journalism degree and put more focus on acting. It was difficult to make the change, because it felt like I had found a bit of success in law, and even though I wasn’t enjoying it, it was easily applauded.

Whereas, I hadn’t had any obvious successes in acting at the time and I think that kind of change was something people doubted – moving from a ‘safe’ to an ‘unsafe’ zone. I bit the bullet, and it was so worth it! Journalism and acting have tied really well together for me, so knowing both areas can complement one another definitely helps me balance everything.

You are studying journalism at the University of Queensland. Do you see a time where you stop acting and focus on these career fields?

I used to worry this would be the case, but I don’t think I could ever stop acting – even if it’s just for fun. I plan to focus even more on acting in the future, and tie what I learn about production and investigation in with what I have learnt about film and theatre.

Do you feel that your success as a performer gives you a platform to spread positivity?

What is the biggest thing you want audiences to take away from your work?

My goal is for audiences to be able to see a bit of themselves in whatever the story is. I think that’s a big reason why we love film and theatre so much.

Getting the role of Daniela in the Curious Case of Dolphin Bay!

Probably being down to the final two on a feature film and missing out. I actually got feedback that it was because of my look. That taught me that there are just so many uncontrollable factors in this industry, and it’s a waste of time to worry about these things, and more worthwhile to focus on things I can control.

I’m in a film called The Edge, which is in post-production at the moment. My friend Jane Larkin created it and stars in it – she is absolutely incredible.

If you love it, do it, in whatever capacity that may be – you never know what that might lead to.

This answer changes all the time, but at the moment it’s Greta Gerwig’s Little Women. It’s my favourite cast ever, the story is so comforting, and it just looks stunning!

What other roles do you think would be the perfect fit for Ella? Let us know in the comments!