Get to know ‘Too Rough’ producer Alfredo Covelli

Born in Rome in 1979, Alfredo Covelli is a film producer, director, screenwriter, teacher, and novelist. He starts working as an assistant director. In 2005 he wins the main Italian screenwriting contest (Premio Solinas) and starts writing features and tv series. In 2012 he creates his own company and starts directing his films and producing films directed by emerging directors, selected by main international film festivals (Venice, Cannes, Turin, Rome, BFI London, SXSW), distributed in theatres, and broadcasted. He works as a script consultant in India and Scotland. He’s teaching screenwriting at the Italian National Film School (CSC-Centro Sperimentale), the oldest film school in Western Europe. In 2020 he creates “Scheme Pictures Ltd” a production company based in Glasgow. His book for children “Vahana Masterclass” has been published in 2021 by Scholastic India.

What inspires/drives you as a film producer?

Discovering and putting a spotlight on new voices and great stories that otherwise would stay in the shadows forever. I’ve been producing in Italy for the last 10 years, LGBT films and films about minorities, but during the pandemic, I founded Scheme Pictures, a production company based in Glasgow. “Scheme” in Glaswegian refers to the housing scheme, in the working-class areas of Scottish towns and cities. The Scottish artists coming from that environment usually speak a different language, they’re not understood and often ignored, and their powerful stories, based on their life experiences, are often considered cliched. Cinema is now moving towards diversity, but everything is very sectorial, and some minorities are ignored. It is in those minorities I’d like to find diamonds. “Light breaks where no sun shines,” wrote Dylan Thomas, that’s my inspiration.

Tell us about your background and what led you to become a film producer.

I started working in movies and tv series in Italy when I was 20, starting as a second assistant director. On the set I could familiarize myself with the screenplays, so I started buying books and researching screenwriting theories. At 25 I won the main Italian screenwriting contest and started working as a screenwriter for movies and tv series, but I was young and funny, so I was mainly hired to write teen stories and comedies. When I turned 30, I remember I wanted to decide the stories that would be produced, their nature, their value, and their authors.

Where did the idea of Too Rough come from and how did you get involved with this project, especially since you are from Italy and the production is Scottish?

When I became a full-time producer, I couldn’t be a screenwriter anymore (since screenwriting is a full-time job) but I was sad since screenwriting was my great passion. So other than helping the directors I was producing with my skills, I’ve decided to start working as a script consultant, first in India and then in Scotland. With producer Olivia Stewart and director Ian Sellar, we started “Bellrock” a script development program in Arbroath. For 5 years we were script consultants for the new generation of Scottish writer/directors. And Sean Lìonadh was one of them.

Why is telling this story so important to you, and why is this short film relevant to our times?

Too Rough is an autobiographical short film dealing with important issues. It’s sixteen minutes, it’s a coming out and a coming of age story, a personal story about suffering, shame, love, and redemption, told by a young artist who has experienced all those things. Sean succeeded in transforming the pain of his past into an award-winning short film, potentially one of the most successful Scottish short films ever. This is the greatest achievement for an artist, and hopefully, the audience will not just be peeking into Sean’s past, but they will also be touched and inspired.

What was the most challenging or unusual part about producing this film? What strategies did you have to have in place to make it happen?

The first obstacle was convincing the public funds that this screenplay full of working class, violence and hysteria was not cliched (it was actually rejected, the first time we applied, for this reason). That the result would be realistic because the director actually lived the real thing. And his life was not a cliché. The second obstacle was shooting during the pandemic, during the most severe lockdown in the UK. It was not production, it was more like solving an enigma. My valiant partner producer Ross McKenzie had to manage the shooting in a deserted Glasgow, and I helped him with logistics from abroad since I was blocked in Rome.

Tell us about your producing style and the assets you bring to your projects. What is unique or unusual about it? What type of producer are you?

I’m not only a producer, I’ve been writing screenplays and novels, I’ve been script consulting for many years and I’m actually teaching screenwriting at the Italian National Film School (Centro Sperimentale di Cinematografia). I suppose I can empathize with my directors. Most of the time, directors come to me with an incredible idea, a great film that will launch them into the Olympus of Cinema. Most of the time, that film is suggested by an exterior need. I help them listen to their inner self, to identify what they really need to tell; that expression is paramount to their existence. And usually, when they identify that idea hiding inside their soul, they create good films.

Talk to us about the theme(s) of this film and how you would like the audience to receive and/or interpret its message.

I don’t think the message is the most important thing in LGBT films or films in general. The power of the film is the empathy that the audience feels toward the story. It’s a communication and perception through emotions, rather than through rationality (which is the usual communication in our everyday life). A film can do the impossible, like making someone who will never accept a kind of reality with his rationality (because of his culture, his family values, his community, his education), totally accepting and understanding that reality through emotions.

I think Too Rough has this power.

How has your short been received so far and what impact has it had in society and your career?

Too Rough has been extremely successful, and almost self-sufficient – extremely rare for a short film – he pays the bills for the Oscar campaign with the money from awards and tv sales. In eight months, Too Rough traveled to 13 countries, screened in 53 festivals and won 19 awards, signed with French distribution Manifest Pictures, and was sold to two main French broadcasters, CANAL+ and CINE+. It just received a nomination in the BAFTA Scotland, and it’s also we’re also hoping for BIFA, BAFTA UK, and ACADEMY AWARDS recognition. This is my first professional production in Scotland. Sean deserves a brilliant career and we’ll surely progress together.

Tell us about working with director Sean Lìonadh. What is special about him and why did you want to work with him? Tell us about collaborating with him.

I met Sean when he was 20 (now he’s 24) during the screenwriting program “Bellrock” when I was his script consultant and I had to guide his creative process, in the creation of a screenplay. He came to me with a poem (he’s also a poet) and we started figuring out a story from those lines. The feature film we’ll be producing soon, with my partner producer Ross McKenzie, is the evolution of that same screenplay, which bloomed from a poem, four years ago. Actually, I could spot in that very young version of Sean a sort of unique fire, maybe the same I could sense in those directors I used to look up to when I was young.

What’s next for you? Talk about your next project and where you’re at right now.

I’ll write new books for children, since writing “Vahana Masterclass” my first book in English, published in India in 2021, by Scholastic, gave me great joy. I’ll try to become a better teacher for my students: I’ve started teaching screenwriting and developing the theories of Lewis Cole, Professor and Former Chair of the School of Arts and Films at Columbia University, who thought me, on a Greek Island, everything I needed to know about screenwriting, and died two years later. His theories are still echoing and growing in me; through the years I kept enriching them, adding my visions, and this process will continue. With Ross McKenzie, we’ll produce Sean’s first feature. And hopefully, with Sean and Ross, we’ll find other voices from the Glaswegian schemes; voices that can’t be ignored and should be heard.

What are you still looking to achieve? What are your next personal goals/aspirations?

I would like to expand my company and produce massive useful entertainment, and incredibly challenging stories that will give light to minorities and dark environments, creating a deep emotional connection between films and audiences.

Trick question: do you think homophobia will ever be abolished?

Giovanni Falcone, the first magistrate to identify and expose “Cosa Nostra” the Mafia criminal organization in Sicily, and later killed by the Mafia, used to say: “Mafia isn’t invincible; it’s a human fact and like all human facts it has a beginning and an ending.”

Homophobia is also a human fact. I trust the new generation. 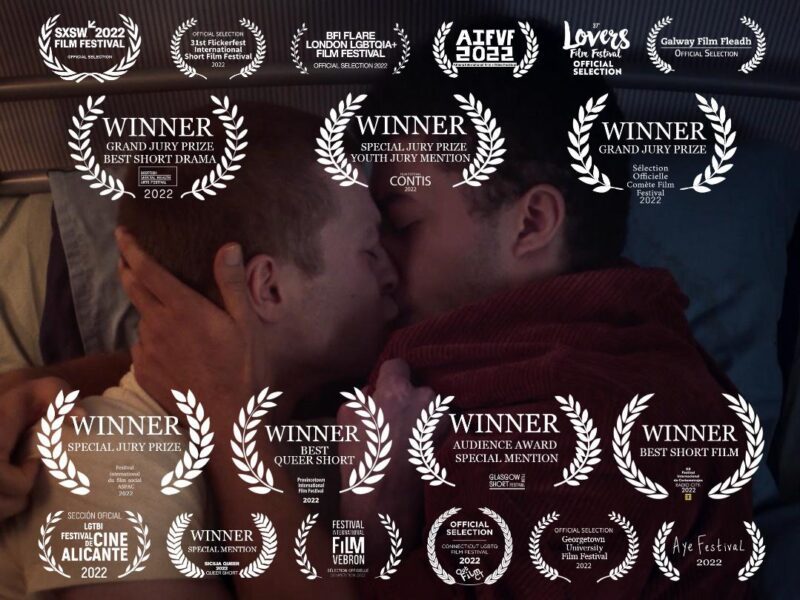 Get to know ‘Too Rough’ producer Ross McKenzie