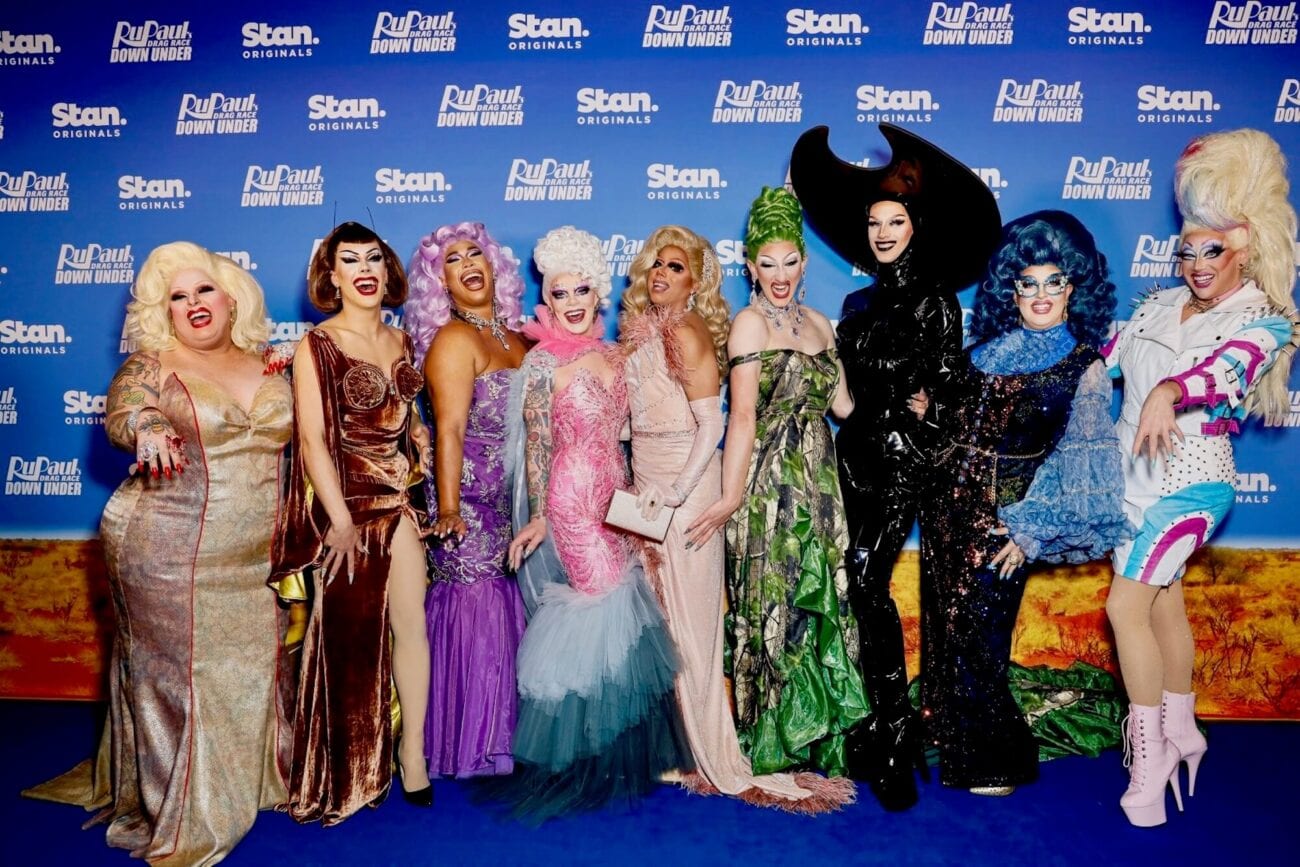 ‘Drag Race Down Under’: Whose makeover flew high and who’s fell short?

It’s no secret the makeover challenges on Drag Race can be difficult. Getting someone who has never walked a day in heels to become a masterclass drag queen isn’t an easy task. So naturally, Down Under saw queens at their highest & lowest moments this week with the challenge.

Bringing in members of the Sydney Convicts, Australia’s first all-gay rugby team, the six remaining queens had a lot of work in front of them. Kita Mean showed the judges her talents of raising her sisters up, while Maxi Shield, Electra Shock, and Scarlett Adams struggled to make it work, with Maxi sadly sashaying away. 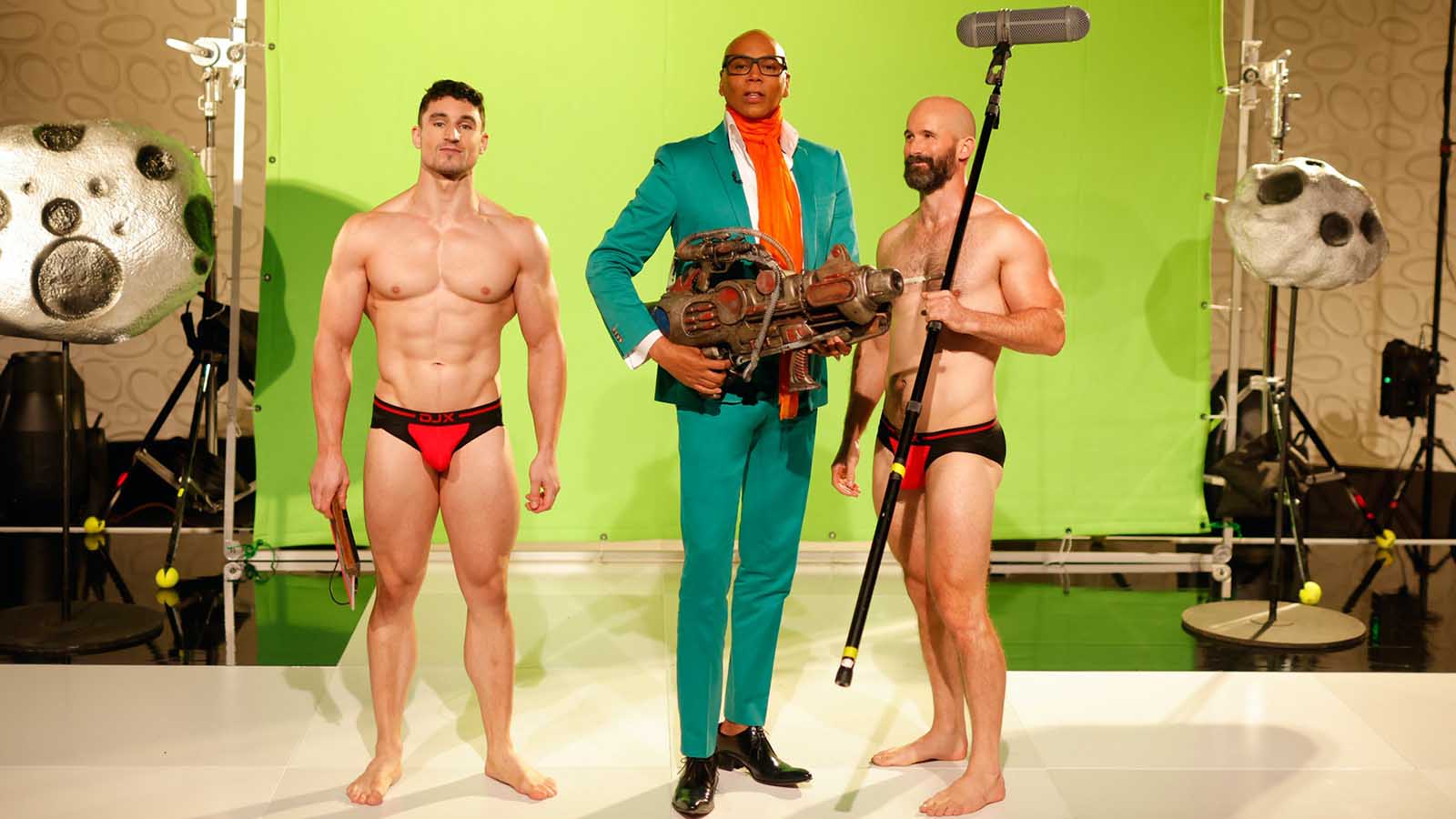 Is that a bunch of stuffed animals in your shorts, or are you just happy to see us? The mini challenge saw the Pit Crew showing off their junk — and by junk, we mean stuffed animals representing the diverse wildlife that lives in Australia & New Zealand.

Maxi Shield showed off her knowledge and took home the win for the mini challenge, meaning she got to assign out the Convict boys to each queen. Surprisingly though, she tried to find the best match for each queen, and rather than save the hot meat for herself, she assigned herself Dan, who as she puts it, “Could basically be my twin!” 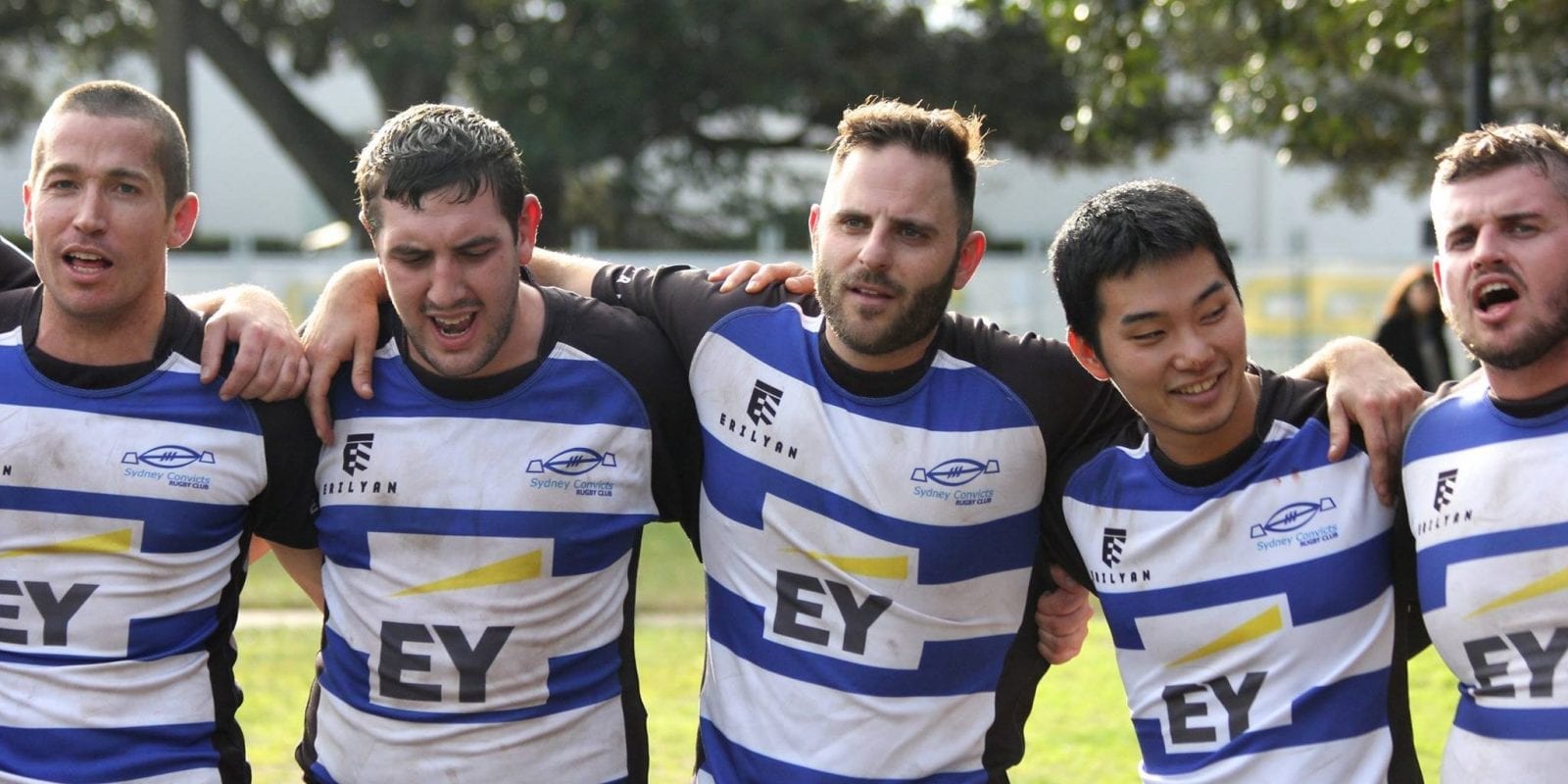 We are a drag family

This is a big shock, but the makeover challenge saw the queens trying to turn the players of the Sydney Convicts into their drag siblings. Never on Drag Race has a queen make their drag sibling out of a stranger. *eyeroll*

Karen from Finance was so full of herself, she basically turned Wolf into Karen from Finance Jr. Everyone else though at least tried to make something similar, but unique out of their assigned player. She may have gone home, but we still gotta give Maxi Shield credit for managing to convince Dan to go clean shaven for the challenge.

Sadly, that wasn’t enough to win the judges over, and after losing the lip sync to Scarlett Adams, we bid adieu to Maxi. We talked with Maxi about the makeover challenge and what it was like to be the most experienced queen this season. You can read our full interview below. 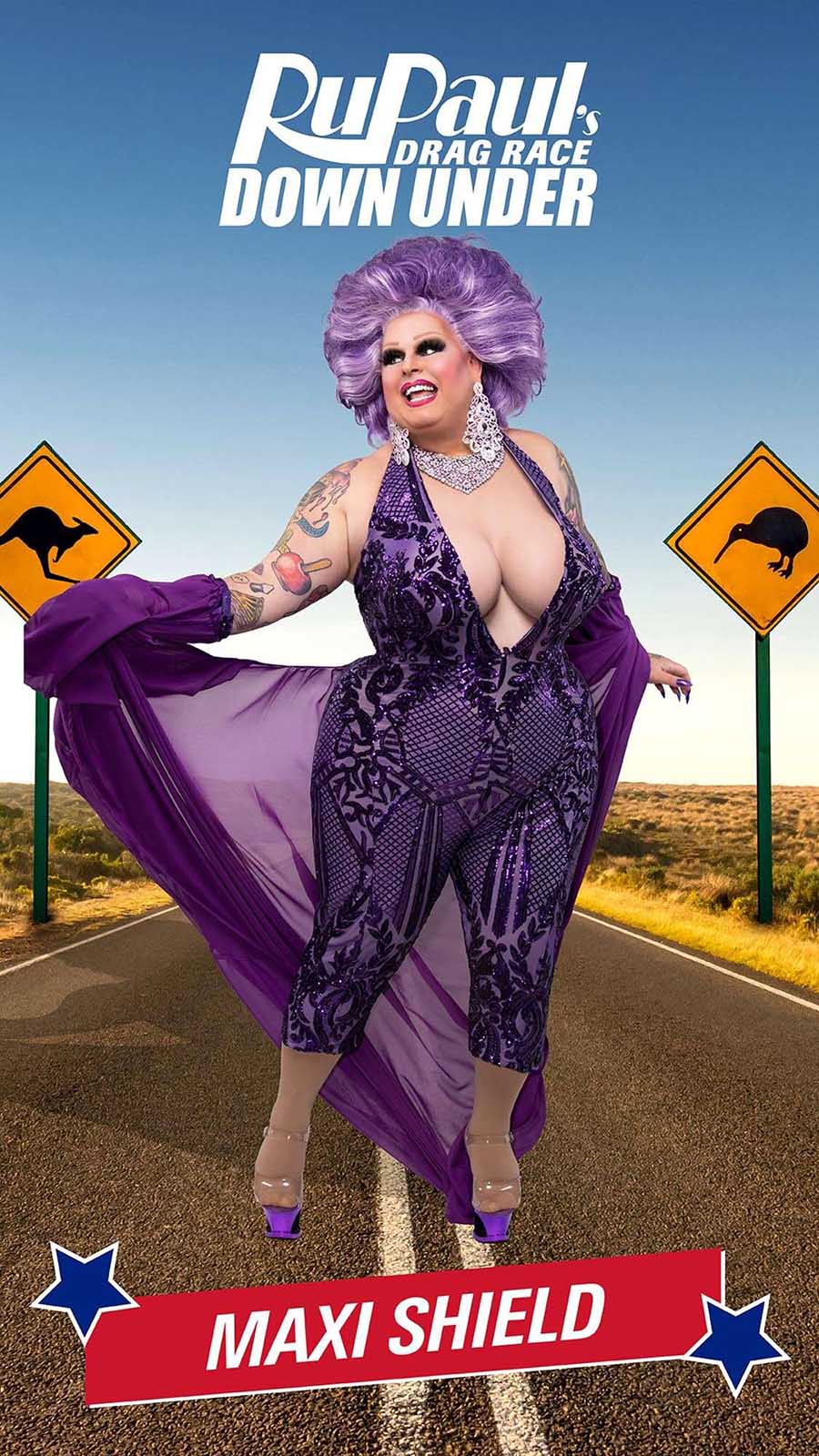 I had a gypsy lifestyle, I guess. So I was born in Ballena, which is in northern New South Wales of Australia, and then I moved to central Queensland in Australia, and we had a dress up box. And my family’s quite big. So, we used to dress up and I always used to sort of dress up as the school teacher, or the female lead singer.

So, fast forward to when I was 21, and I was on Oxford Street, one of the gay precincts in Sydney, and one of my friends said, “Let’s go out in drag!” And, you know I got propped up in a charity performance, and I looked dreadful. In Australia, you would say, I looked, I looked absolutely sh!thouse. But as soon as I got on stage, it was just an epiphany, it was, you know what, I love this. This is, this is what I’m gonna do. 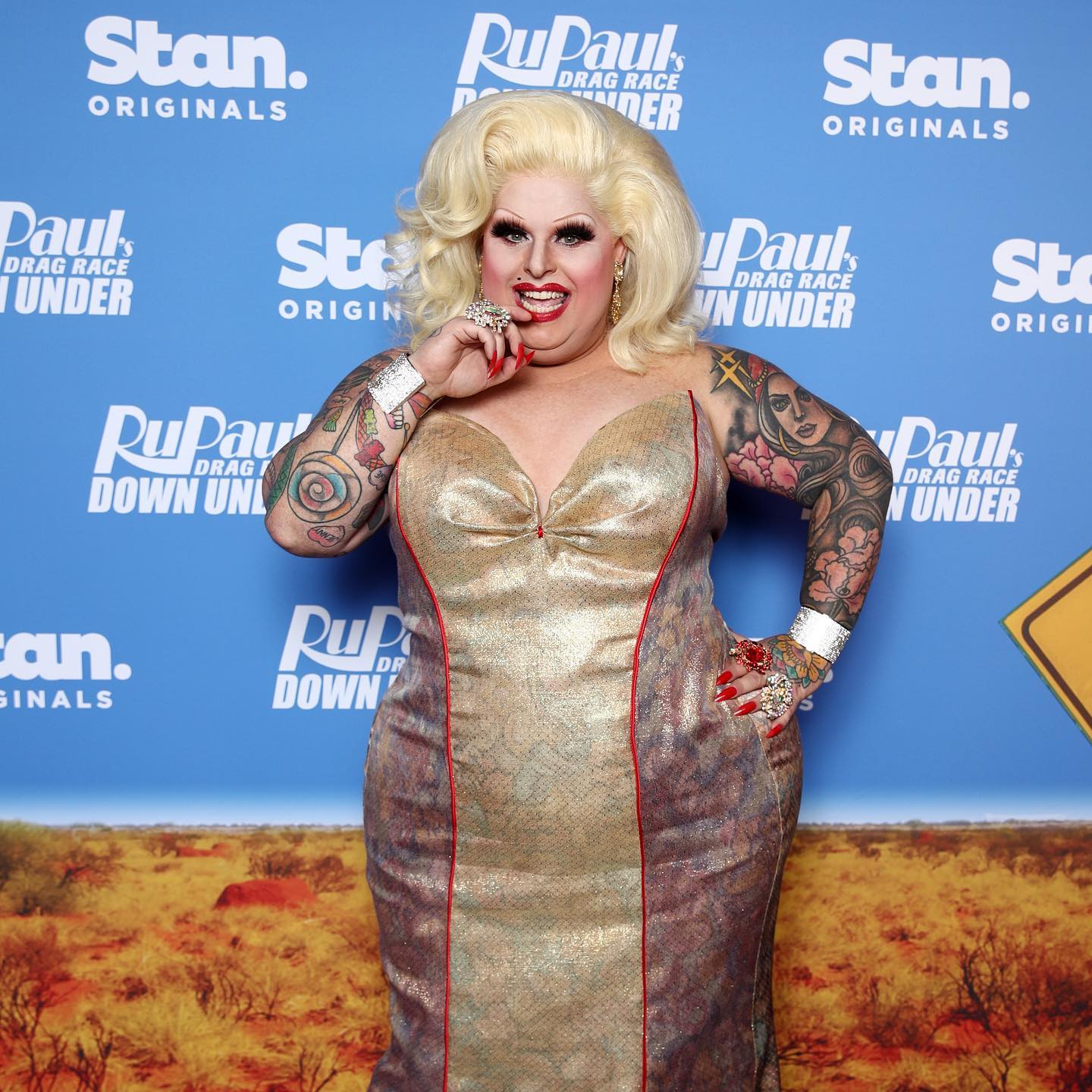 What made you want to audition for Drag Race Down Under and what was your reaction when you joined the cast?

There had been rumors in Australia for probably about two years. And, you know, the fans are very die hard with Drag Race.  And there were always top tier lists of drag queens they wanted to see on Drag Race and I was never on it. So I always said to my partner, “Well, you know if the opportunity ever arises, of course I’m going to go for it.”

For the last few years, I sort of like, I didn’t think there was going to be an opportunity. So when this opportunity came, I was sort of pushed back on the back step a little bit. I was sort of like, “Oh my god, is this sort of real? Is it real?” And I’m so happy and grateful to have a partner that very much grounds me. In that he was like, “Well hurry up, audition! Do it now. Do it now, you’re gonna do it now.” 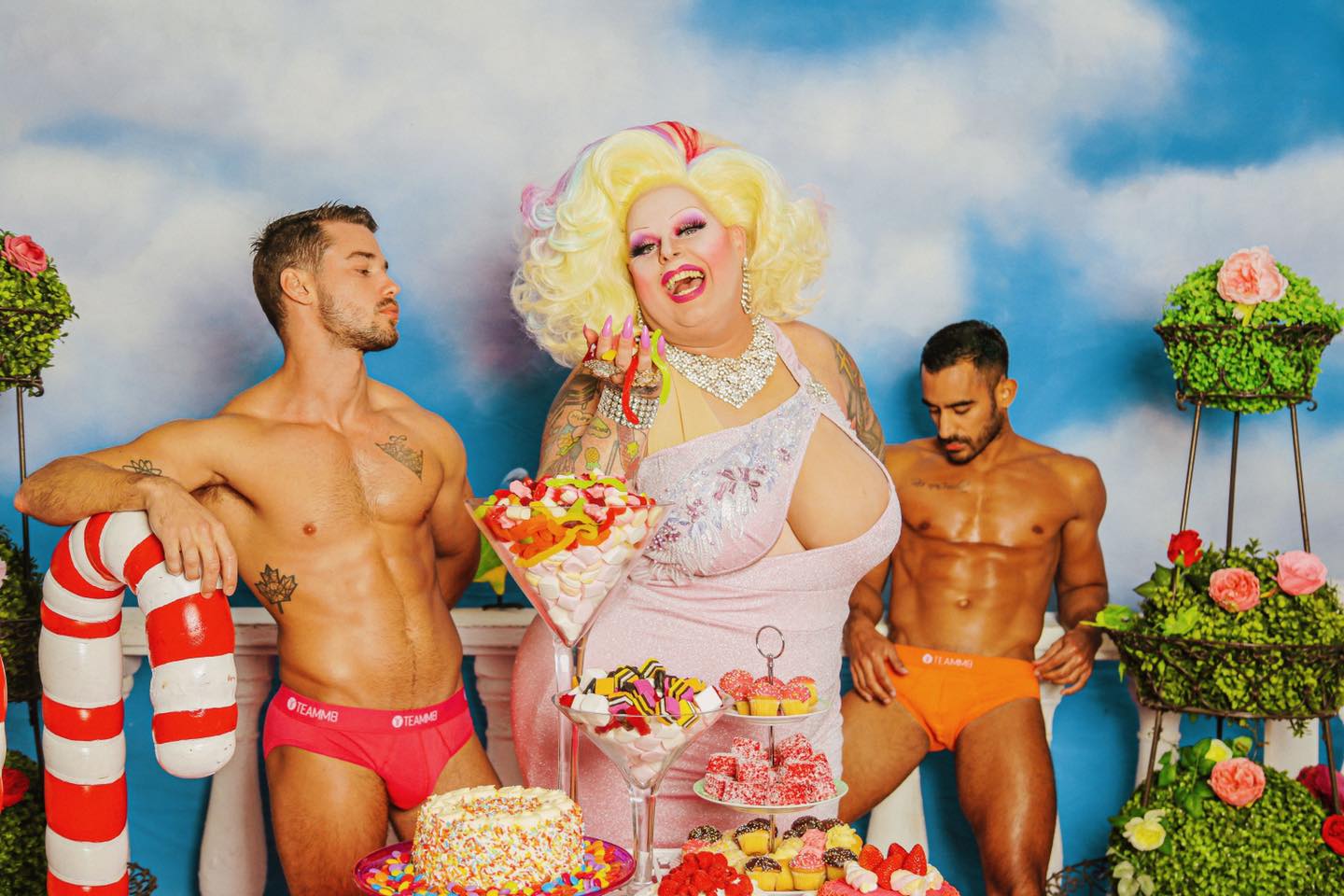 How do you think drag today compares to when you first started?

I was really lucky; I sort of started drag at the tail end of the Prisilla: Queen of the Desert era. See, I was a social drag queen in that, you know I used to dress out with my sisters, we’d go out and get drunk. You know we’d have a good time, but we never sort of performed really. We’d do a charity here and there, but I got to witness a lot of the original Priscilla: Queen of the Desert showgirl that were in the movie.

I was so happy to start at that stage. You know, there was a little bit of internet. If you would say, like the internet was so new that I think my password for my email was four letters. I didn’t even have to have a capital, you know, that’s how long ago it was.

It was always, you know, a lot of the older girls was sort of the top of the hierarchy in the drag scene, but now, you know you’ve got young 18 year old girls going out in drag experiencing that fabulousness that I experienced when I was younger. Walking into one of the iconic pubs, which is called the Imperial Hotel, and watching my first drag show. 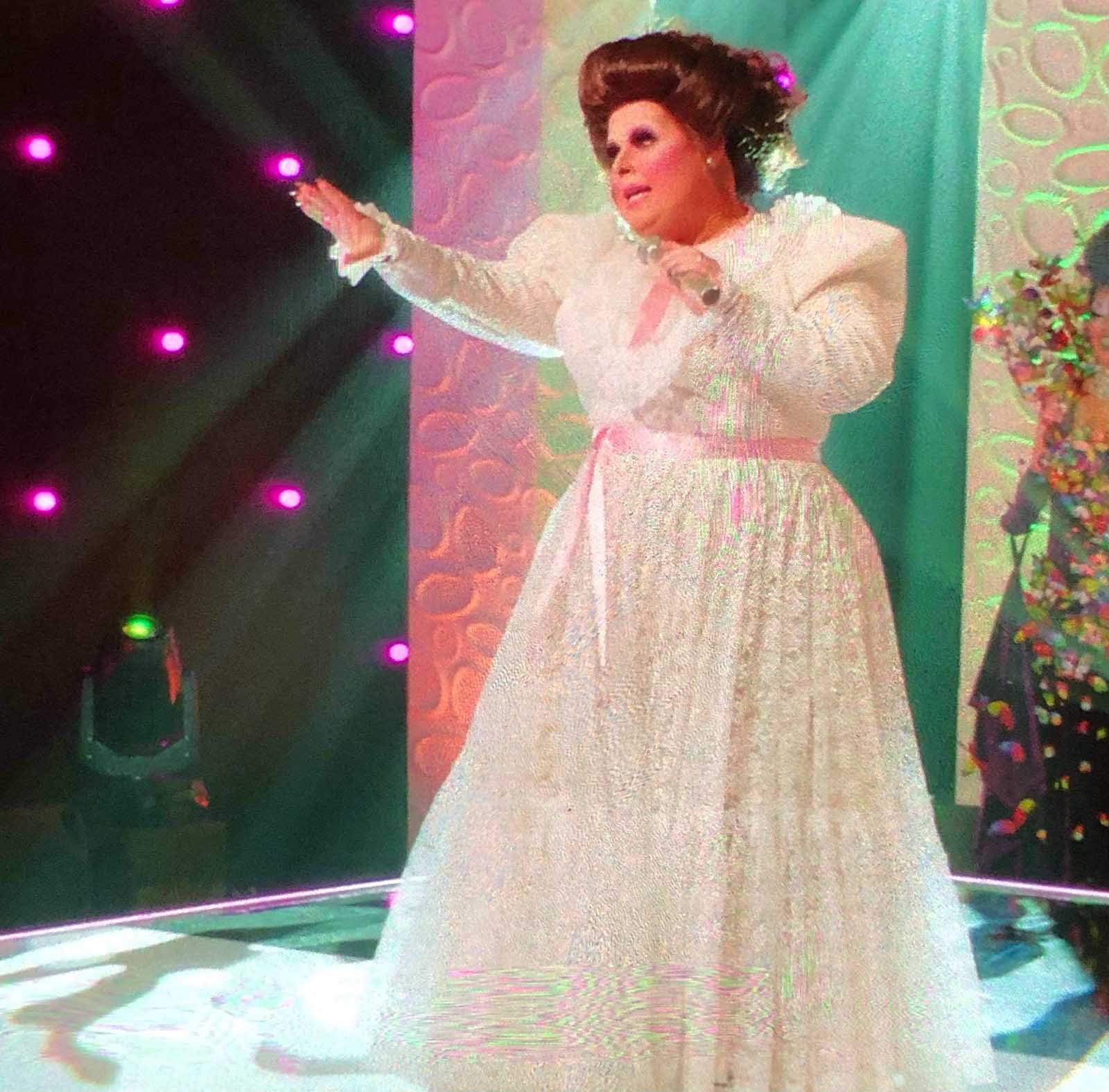 I guess what I’m trying to say is, my first experience watching the first drag show, or to someone that is 18 and seeing the same sort of drag show for the first time. I don’t know whether or not it has changed.

I think technology and lighting and makeup are different, songs are different, but I think just that a core experience of that little gay, lesbian, transgender person seeing their first show that that flame, those butterflies, that excitement will always stay the same.

You know, the lighting is gonna change. The staging is gonna change, fashion changes, but you still see sort of those, those young kids coming in and watching drag and watching a show and their faces light up. And it’s that beauty that I don’t think has changed because I remember when I was sort of 18, back in the old days. 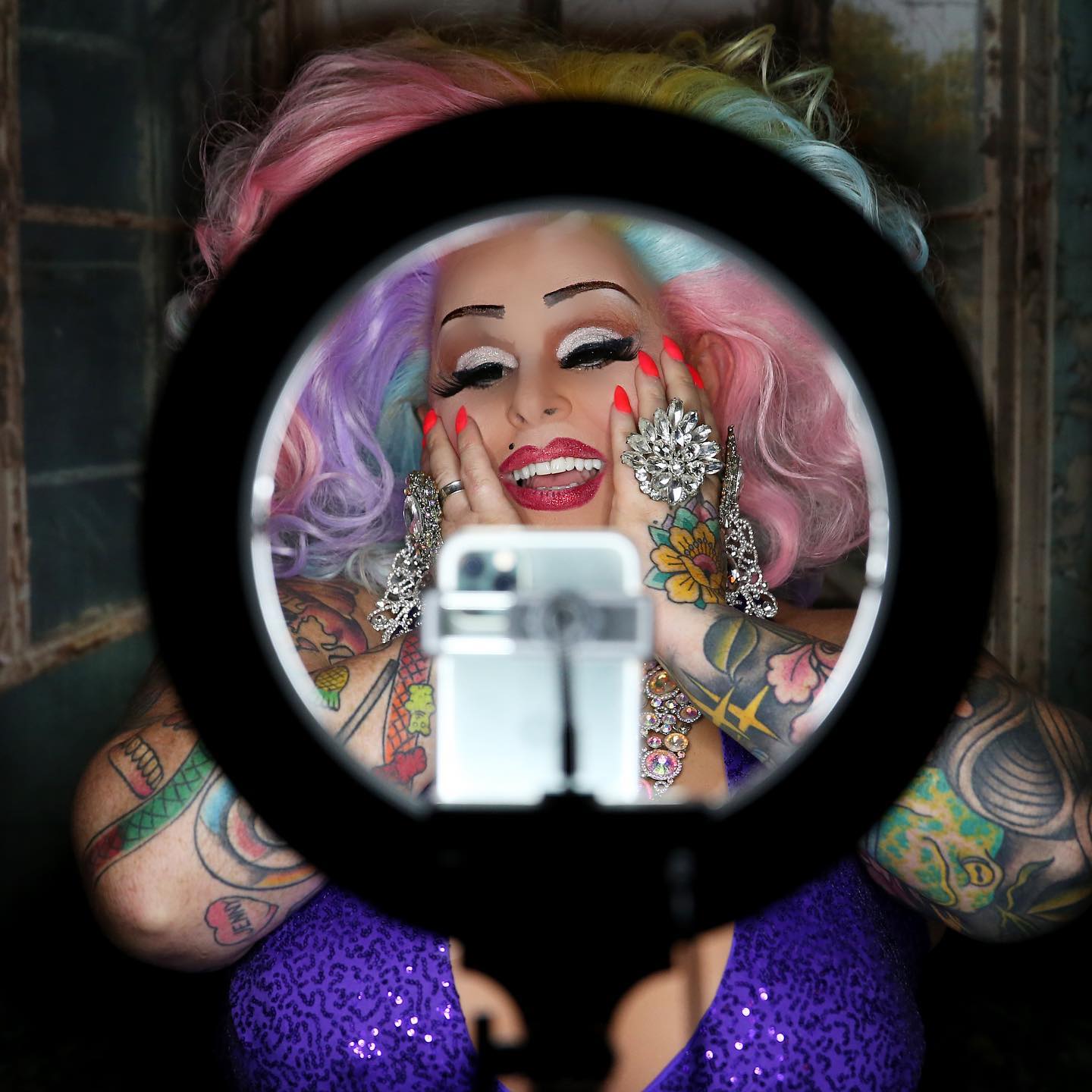 A lot of people called you an underdog for being both a bigger queen and an older one. Did you see yourself as the underdog going into the competition?

I knew I didn’t want to go into the competition as the most experienced. I knew that I did have years under my belt, and, you know, some fabulous stories. I always wanted to go in as someone that was eager to learn, because these young queens are just amazing, absolutely amazing.

And I was, you know, I thought that maybe I was an underdog, but then, to be honest when Electra [Shock] came in, and no one knew who she was actually, I thought, “I guess I’m no longer the underdog there, I might just be the old dog.” In Australia we love the underdog, we really do so, you know. So, if that’s what I was pegged as going in, the old underdog, I am very happy about that. 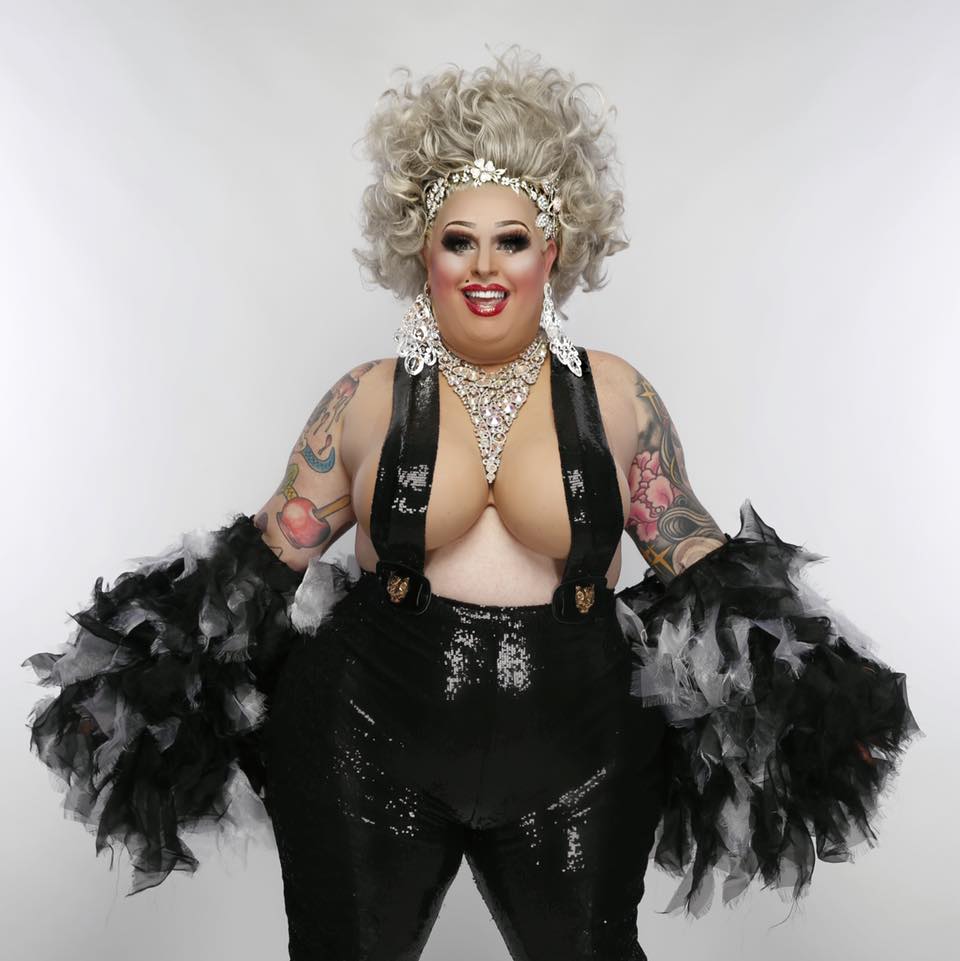 What made you choose Dan as your makeover project?

So it was down to two boys, and Dan was the choice because I thought he is like, basically my twin. And I knew that I had an outfit that fit him. I knew if he decided to shave his beard, we would have the biggest transformation. So yeah, it was very strategic on who I chose.

Everyone else, I just sort of gave them either body shape and what have you, but definitely I thought you know what, Dan, my twin. Shave his beard, and we’re going to go well. Unfortunately I didn’t factor in that he could never walk in heels. Oh my god, I just told him to take the heels home and I asked him “Did you practice at home?” and he was like yeah, and I’m just like “Then how did you get worse?!”

I mean he’s just a lovely man, he was so sweet, and we share a birthday. Isn’t that crazy? That’s crazy. So it was meant to be. We could’ve been twins. 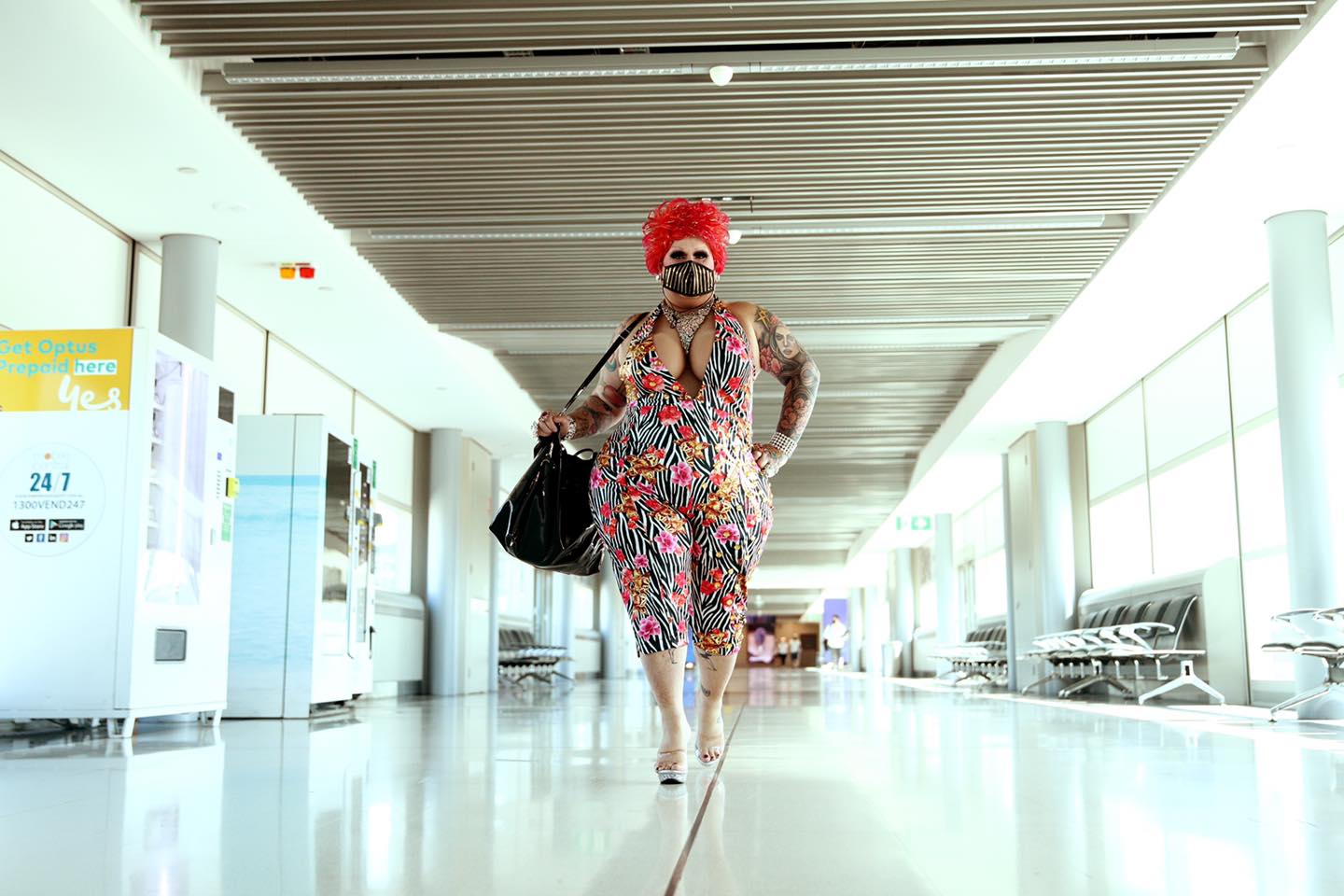 What was your inspiration for the lewks you & Dan wore on the runway?

Well you see, I was inspired by  a plus-sized, UK performer, and she’s just absolutely incredible. She sort of wore something similar to that lewk. I was also playing on the Ratiliff twins from Big Business, which is a Lily Tomlin and Bette Midler movie. So that was sort of our inspiration. Those two sort of elements.

You know what? For Dan’s first time ever in drag, and I know I got eliminated, but he was just so happy. And I, that was the one thing that I always wanted to do, coming into a family resemblance challenge, is to give the joy of drag to someone else who may not have had drag or this may be something that they would never even consider. 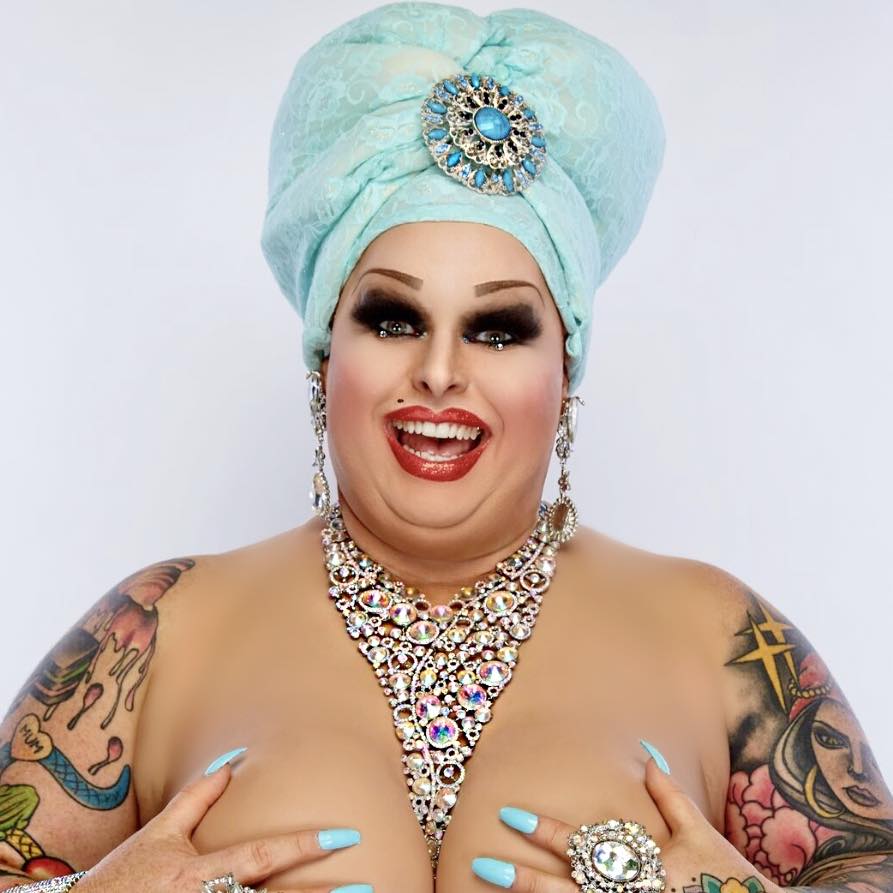 Now that everything’s said and done, what did you take away from your time on Drag Race Down Under?

Um, I guess, I definitely took away nine new sisters. And I’ve learned, you know, small things like, you know, I change my makeup, every time I do a face. You know, listen to people. Make sure that you’re aware of what’s going on around you, other than just sort of your tiny little circle.

As well as that drag reaches over many people, especially something like Drag Race. So, you know, hopefully, the ears and eyes are opened a bit more. And we can see a lot more that’s happening around the world.

What’s coming next for Maxi Shield?

Before drag, I was in hospitality. And you know, I am really investigating, maybe, releasing my own cooking show, and actually focus on LGBTQIA chefs and cooks around the world. And you know, with food being such a huge part of my life, maybe bring that and add a little bit of drag element to that as well. I would love to call it Chewing the Fat with Maxie.

Drag Race Down Under airs Saturdays on Star in Australia, TVNZ On Demand in New Zealand, BBC Three in the UK, and WOWPresents Plus in the U.S. and other selected territories.