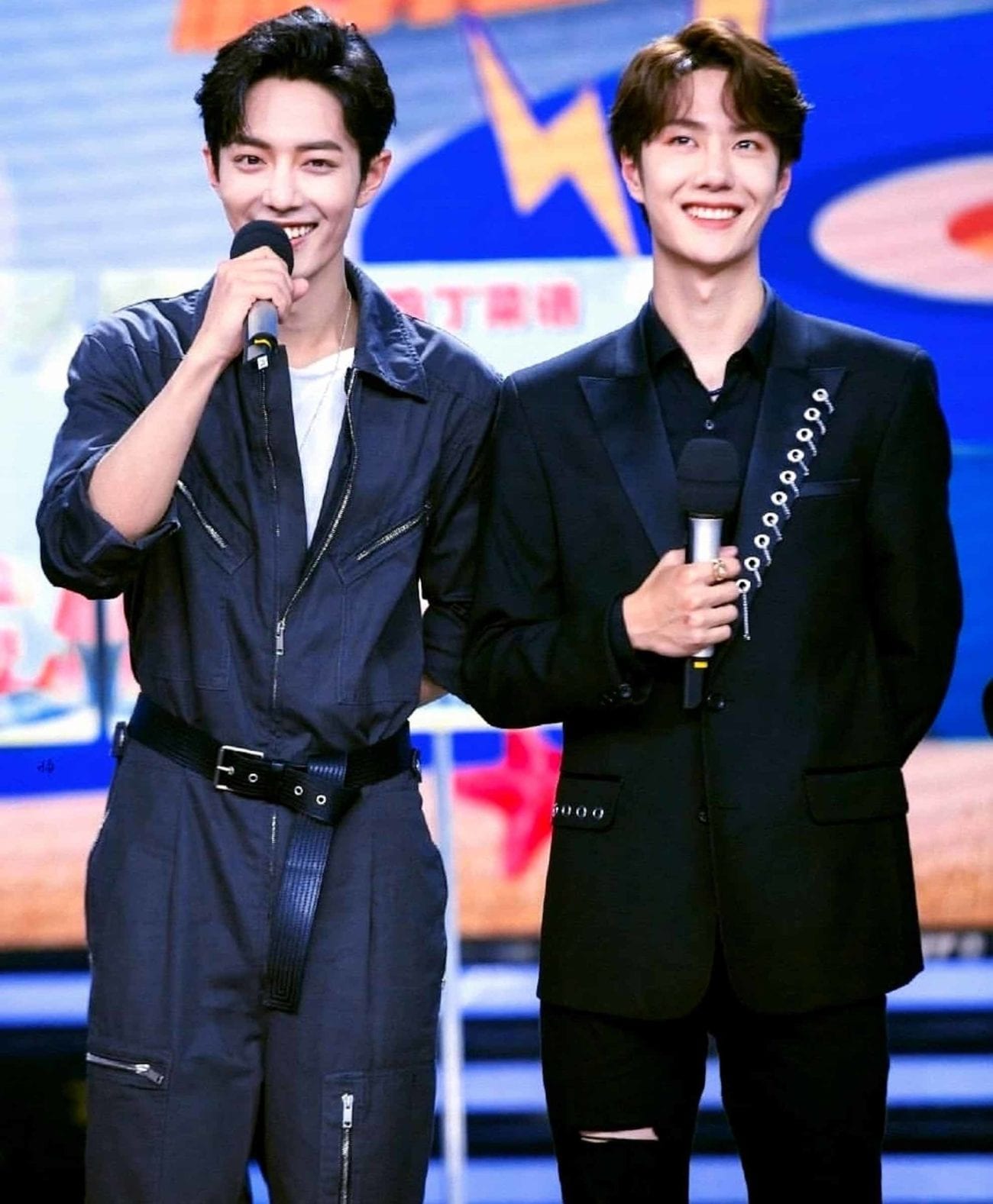 Wang Yibo and Xiao Zhan reunite on ‘Day Day Up’

Day Day Up is a Chinese variety show that features Wang Yibo and four other prominent Chinese entertainment personalities. The show has been on the air in China since 2008 and was originally created to broadcast and promote traditional Chinese values & promote harmony in Chinese society in light of the Beijing Olympic Games. The show became so popular, it is still running today.

The Chinese title of the show “Tiantian Xiangshang” (天天向上) comes from the old saying, “Study well and climb higher everyday or study hard and you will improve everyday” (好好学习，天天向上; Haohao Xuexi, Tiantian Xiangshang).

Wang Yibo is most notably known for his role of Lan Wangji in the BL drama The Untamed. In 2019, right after the release of The Untamed, Wang Yibo brought his co-star, Xiao Zhan (who plays Wei Wuxian), to Day Day Up to promote their show. 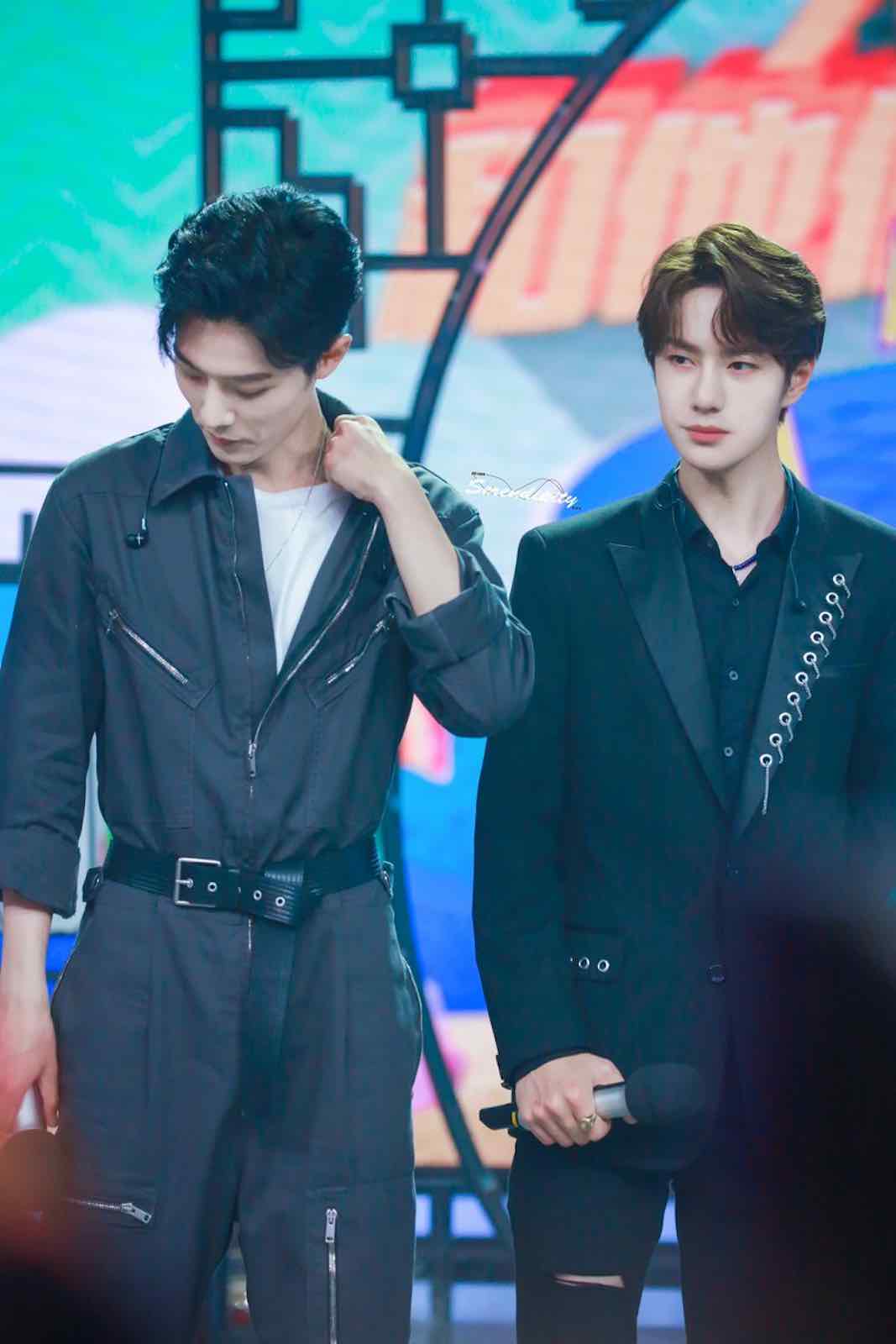 It is well documented that although the two men didn’t know each other before filming The Untamed, they quickly developed a strong bond and became very good friends. Their familiarity with each other & the closeness they developed is evident throughout this episode of Day Day Up.

It has been a year since the release of The Untamed, and seven billion streams later, fans are foraging the internet for interviews and behind-the-scenes footage of Wang Yibo & Xiao Zhan interacting as themselves. This episode of Day Day Up gives fans just that! It seems like the whole world has YiZhan fever right now!

Come with us as we review this very special episode of Day Day Up. 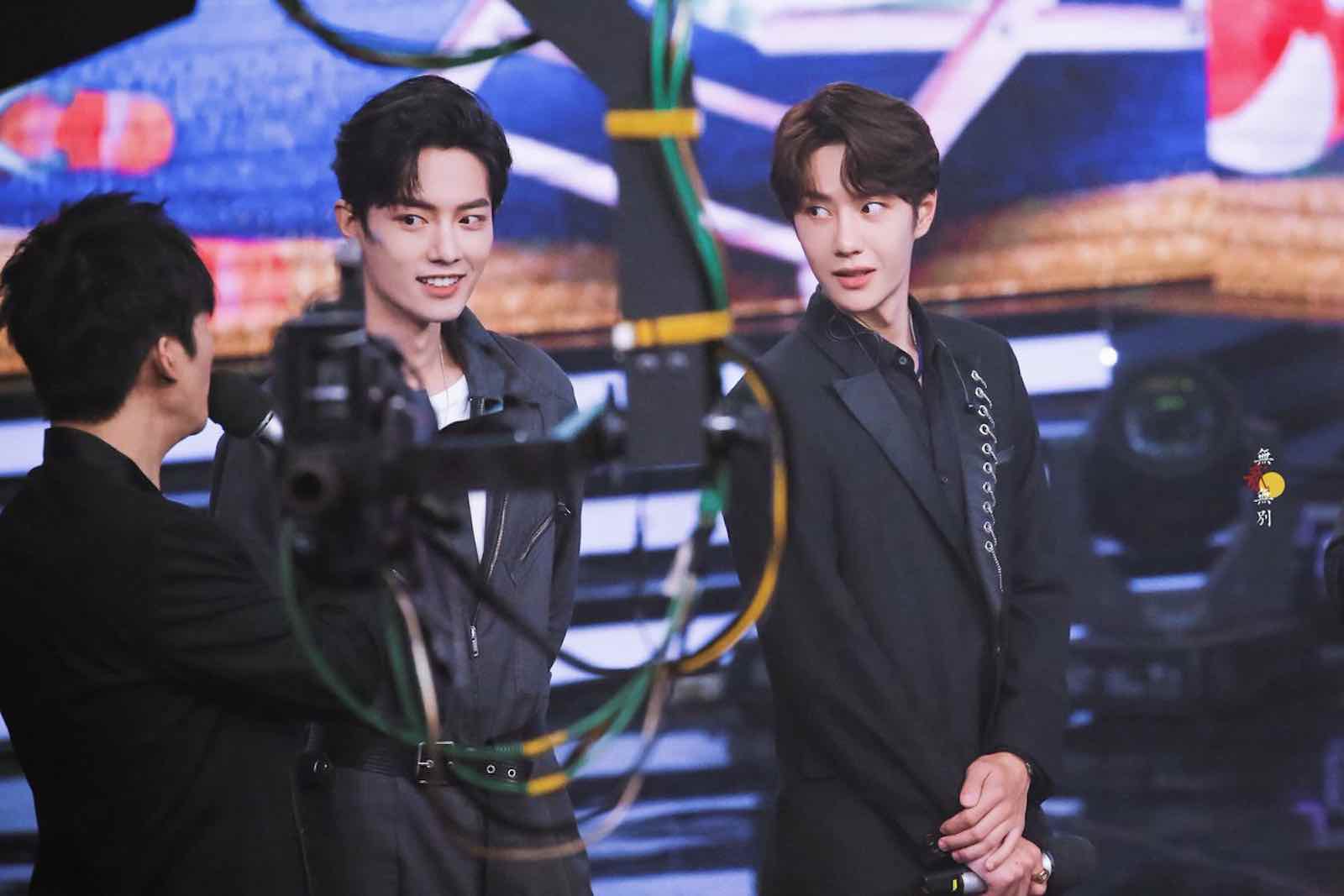 The show begins with a dance number. Cast members & guests appear on the stage in pairs as they are introduced to the studio audience. Wang Yibo & Xiao Zhan enter together and bust out into an impressive dance number; the crowd cheers loudly.

As the episode kicks off Wang Han introduces this week’s guests: a famous Chinese singer, Zhang Bichen, popular band Lion, and of course, Xiao Zhan. As Xiao Zhan is introducing himself, the studio audience can’t seem to hold back their enthusiasm and much screaming ensues. He definitely receives the warmest welcome of any guest on the stage. 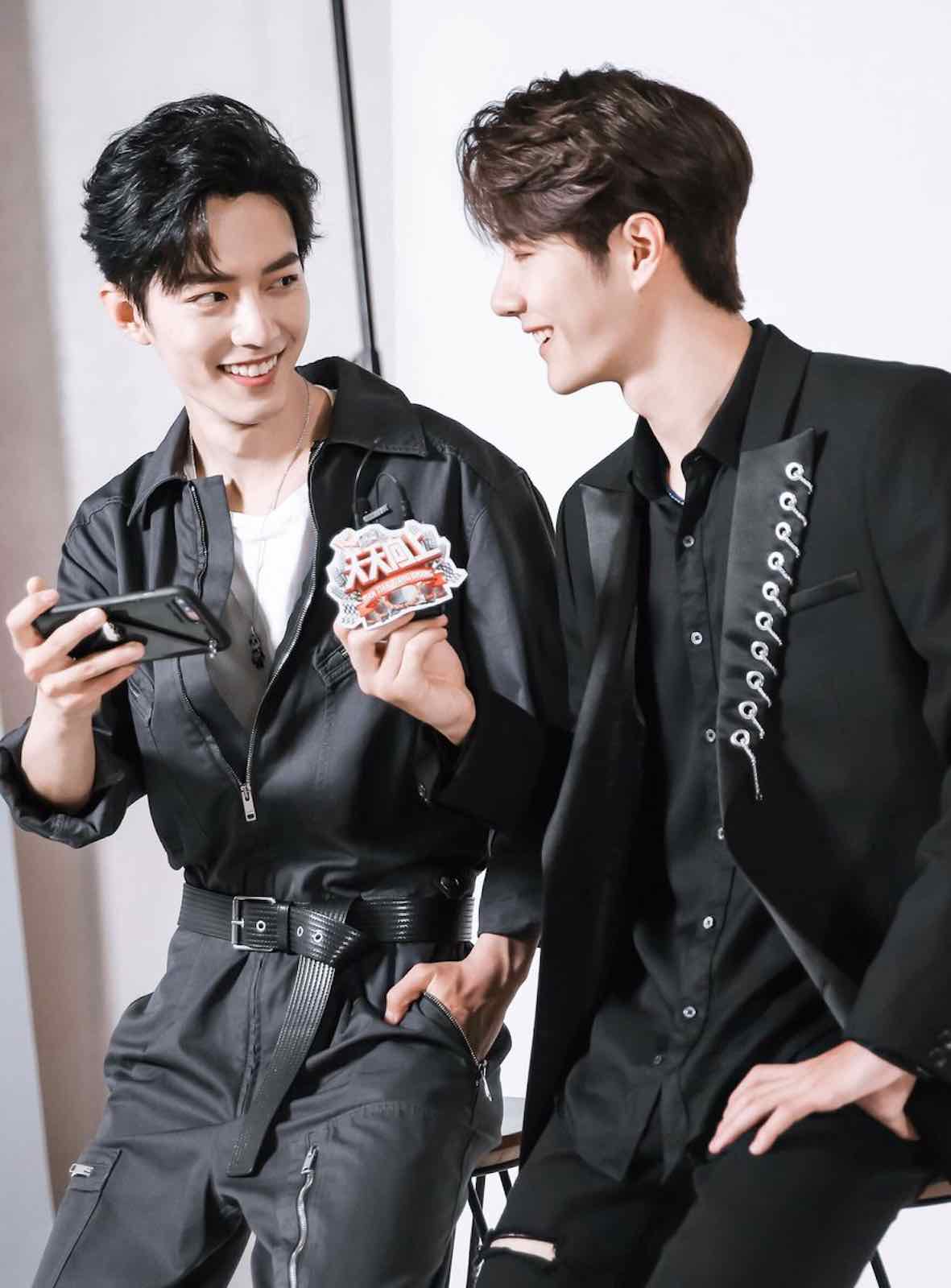 As cast members and guests are paired up for this episode, they are asked to put their names together to form team names. It seems this is where the ever popular ‘YiZhan’ ‘ship name found its inception. When the pair are called on, Wang Yibo announces that his team name with Xiao Zhan will be YiZhan.

Then, before the shenanigans really kick off, for some reason, the cast & guests were asked to bring in photos of their younger selves. Viewers are treated to several photos of Wang Yibo as a teeny kiddo, and Xiao Zhan delivers a photo of himself during his freshman year in college. He calls himself fat in this photo, but we disagree. All we see is Xiao Zhan being his regular adorable self.

In regular Day Day Up fashion, the shenanigans begin relatively quickly. In the first segment, which they call 11 seconds, Wang Yibo & Xiao Zhan are required to look at each other for 11 seconds while ‘handsomely blinking’. These two dorks happily oblige. 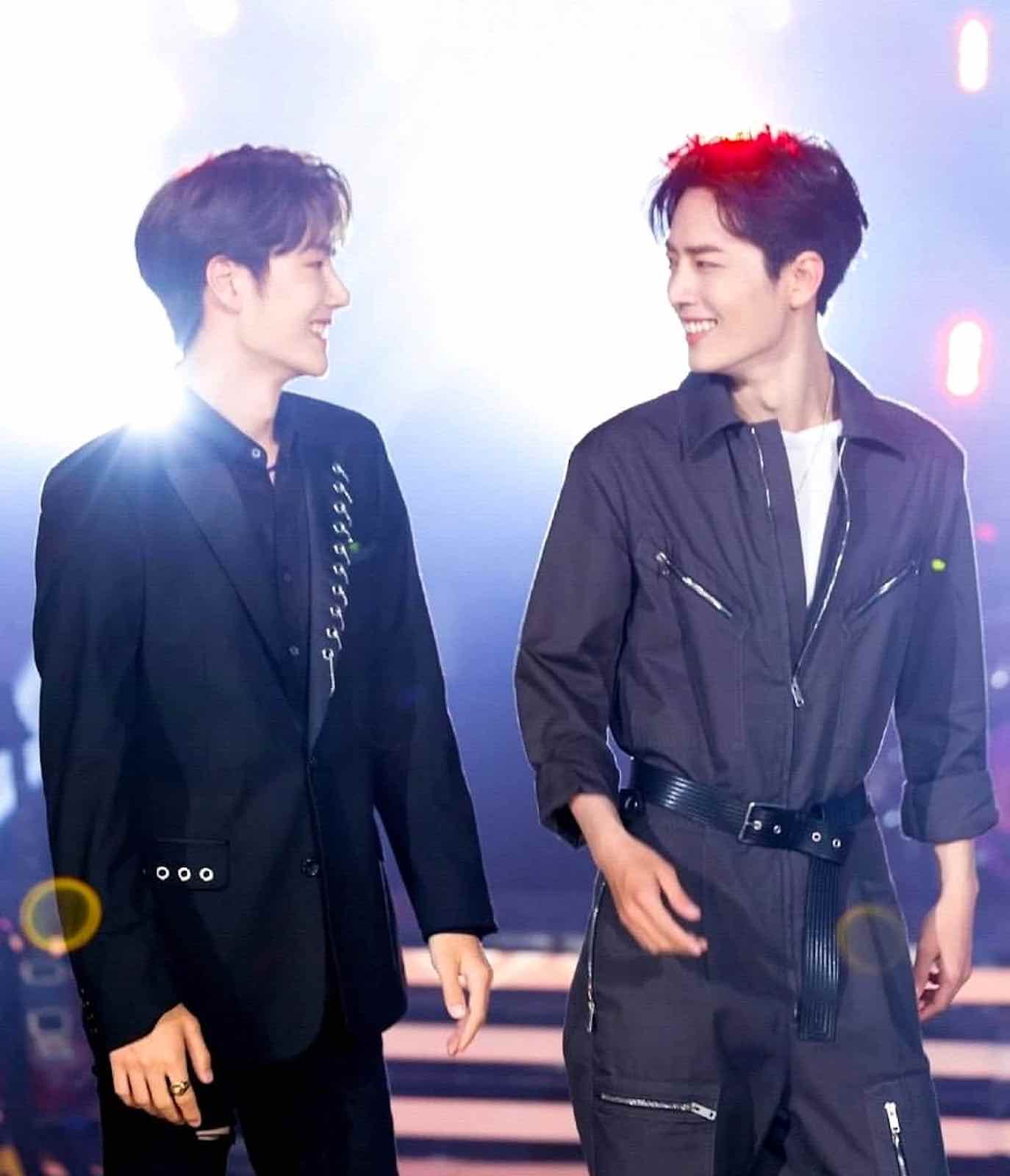 We think this segment is supposed to parody the fact that the characters they play on The Untamed spend most of the series communicating seductively through their eyes. While seduction isn’t exactly achieved in this segment, entertainment sure is. We couldn’t help but grin goofily as these two pull faces and gawk at each other for 11 seconds straight.

As the pair are clearly on the show to promote The Untamed it is exciting to listen to the two men talk about their characters. Xiao Zhan discusses the differences between Lan Wangji & Wei Wuxian. He laughs while he tells the audience that Lan Wangji is always clean, while Xiao Zhan felt like he was always rolling around in the dirt, totally messing himself up.

The montage that subsequently follows hilariously depicts Wei Wuxian constantly finding himself in messy and precarious situations, as opposed to Lan Wangji, who is delicate, elegant and clean. The montage makes the show look like a comedy, as opposed to the painful drama that it is! 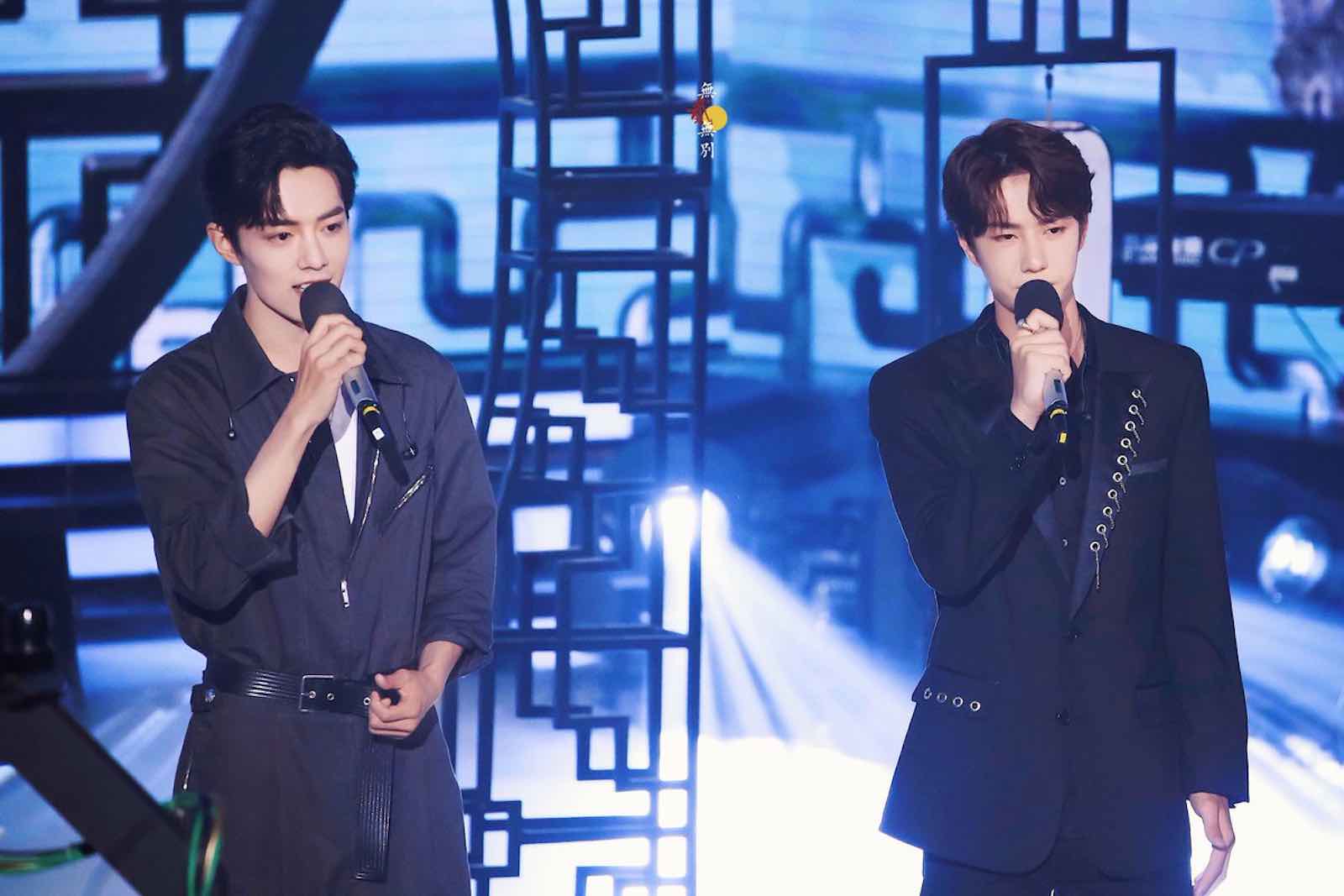 The two then talk about their first impressions of each other, how well they get along with one another, and their shared hobbies and music interests. Wang Yibo & Xiao Zhan individually break into acapella songs at this point, delight both the studio audience and viewers at home. Boy, can they sing!

Before the segment ends, it is revealed that Wang Yibo taught Xiao Zhan the official Day Day Up dance. It’s actually a really dorky dance that looks like it was designed for first graders, but when Xiao Zhan & Wang Yibo perform it together it’s impossible not to swoon. 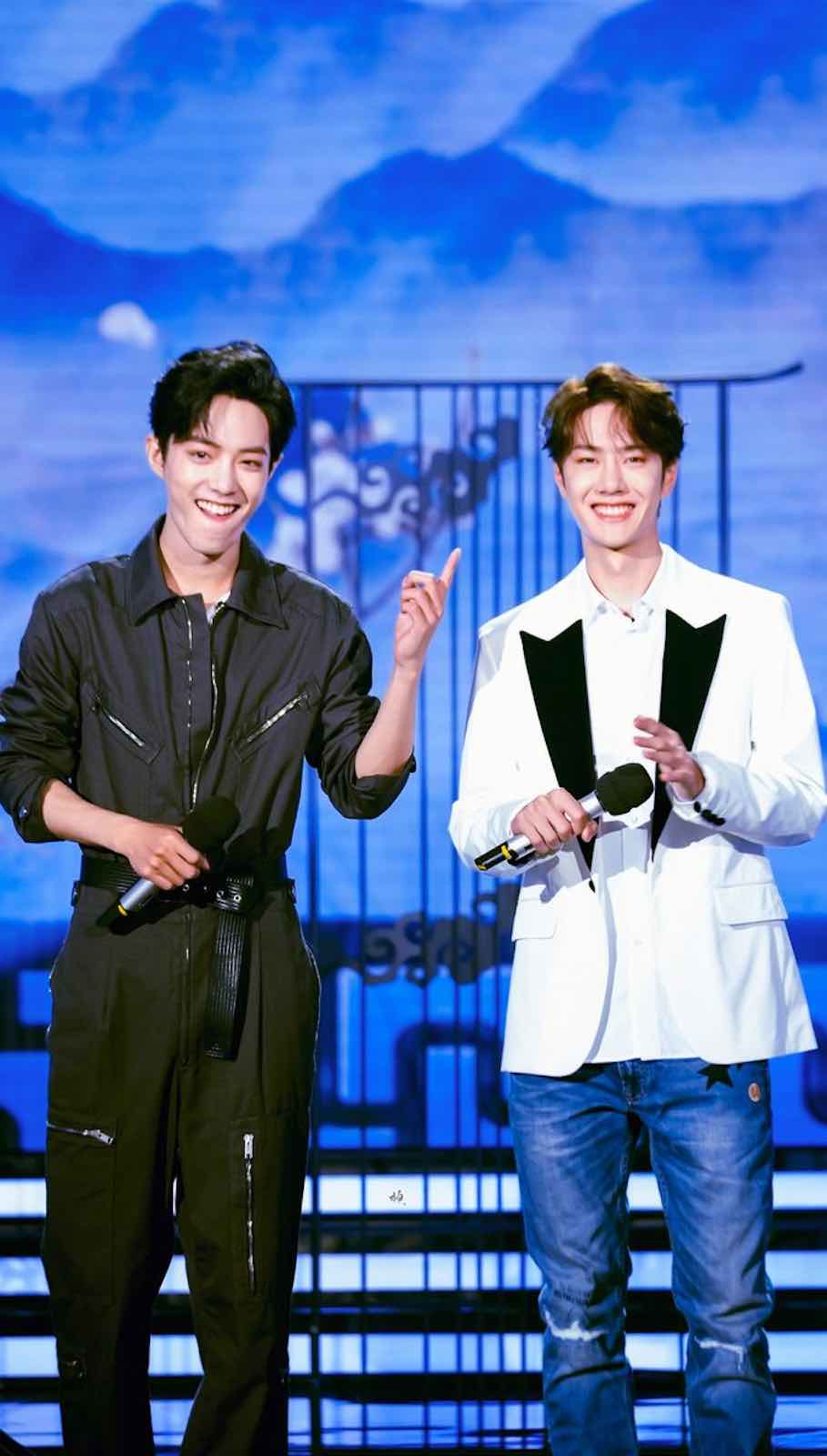 The two men then perform a song together in which both Xiao Zhan & Wang Yibo show of their vocal & rapping talents. The audience seems to enjoy this performance very much. The performance is visually appealing & exciting because hearing Xiao Zhan rap is a rarity!

Finally, before the show is over, the pair emerge on a The Untamed themed stage to perform the title track from the show, Wuji. Due to the show’s popularity, Wuji spent most of 2019 topping the charts and was dubbed the song of 2019. Both Xiao Zhan & Wang Yibo laid vocals on several tracks on The Untamed soundtrack. 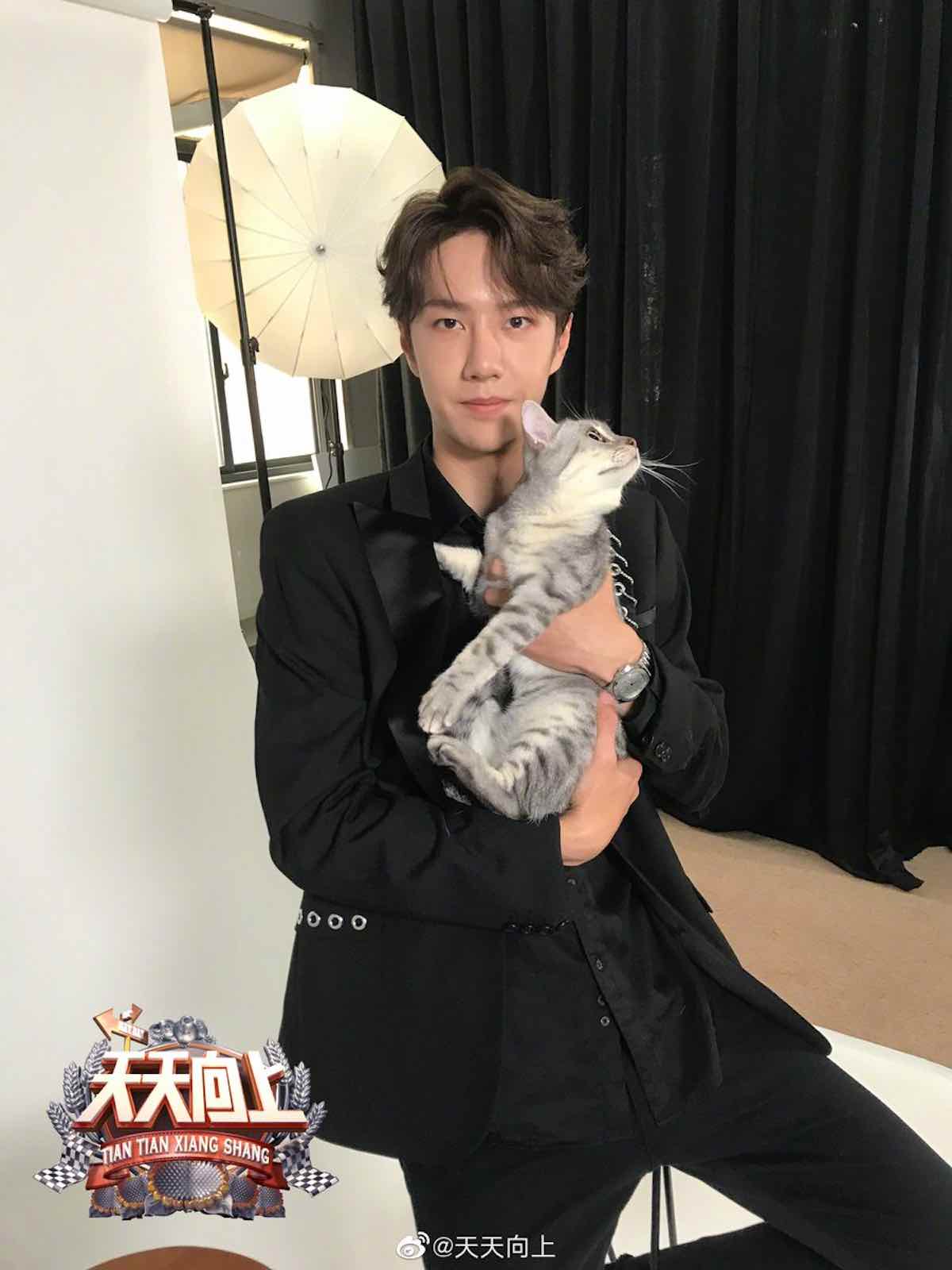 In another round of 11 seconds, Wang Yibo is paired up with Xiao Jingteng from Lion. The two men are said to be exceptionally introverted & quiet, and in this segment, they are required to say as many nice things to each other as possible in 11 seconds.

Ridiculous amounts of bowing (a traditional Chinese custom) and hand shaking ensues before either man says a word. Xiao Jingteng then proceeds to stumble over his thoughts and blurts out that Wang Yibo is very handsome. Wang Yibo compliments Xiao Jingteng’s fashion sense. The men shake hands again and hug and the next segment begins.

Later in the show, a young boy who is learning English is brought out onto the stage. It appears that this segment is promoting a language learning tool, however, they integrate it into the show so well it’s hardly noticeable that the whole segment is a sales pitch. 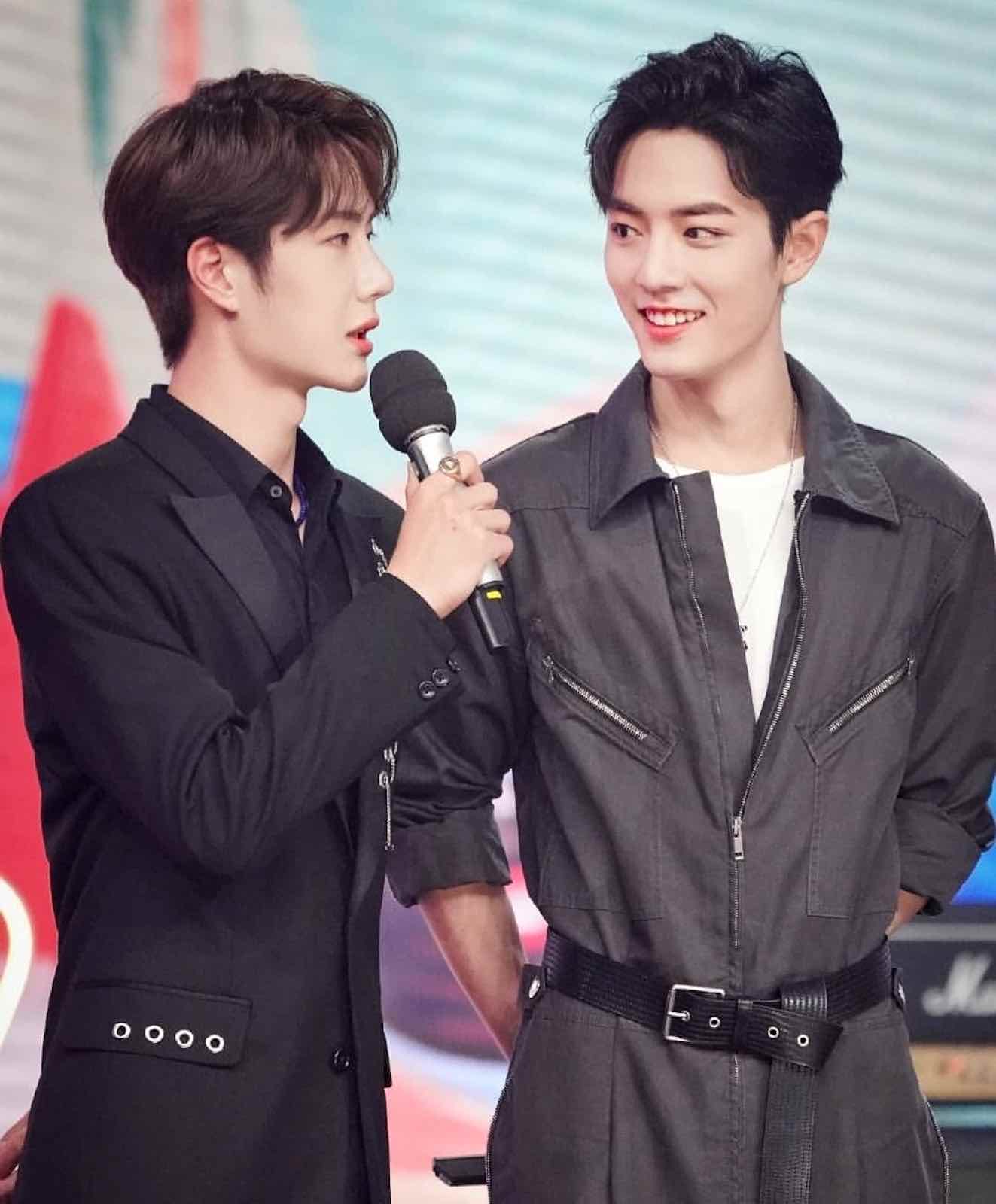 The kid tells everyone that he has been learning English for two years, which is impressive because his language skills are very well developed. The little kid tells Wang Yibo that he is ‘so beautiful’ while Xiao Zhan watches from the sideline laughing. Wang Yibo responds with a fervent ‘no’, clearly embarrassed.

The kid then goes on to say that when addressing a male, the appropriate word to use for this particular compliment is ‘handsome’. That seems to get Wang Yibo’s attention, as the boy referred to Wang Yibo as ‘beautiful’. Wang Yibo asks the child in disbelief whether that means the child thinks he is female. Qian Feng jumps to the child’s defense and tries to explain the situation away.

The coolest part of the segment is viewers get a rare moment of Wang Yibo speaking in English. His pronunciation is well developed & is quite impressive! 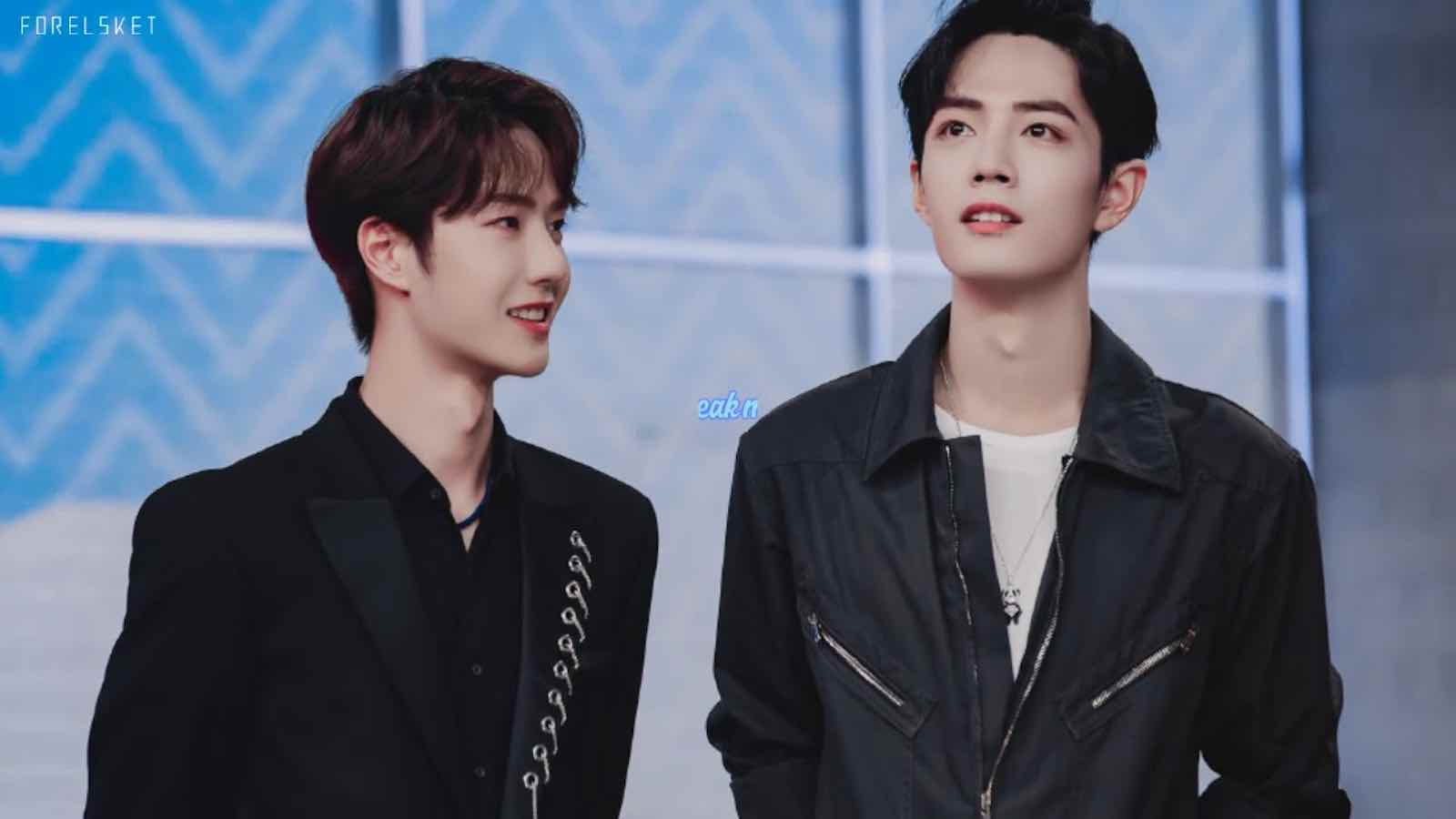 There is a segment in the first half of the episode where the Day Day Up cast challenges the band Lion to a weird physical lift. All five men have to stand butt-to-butt and link arms and lift themselves, as a unit, from the ground up. Sounds innocent enough, right? Wrong.

These Day Day Up men really struggle with this activity. Wang Yibo tries to lead the way and lift them all up but they’re falling down all around the place and on top of each other. They have to attempt the activity more than once before they’re successful. There is something utterly hilarious about watching grown men falling all over each other. 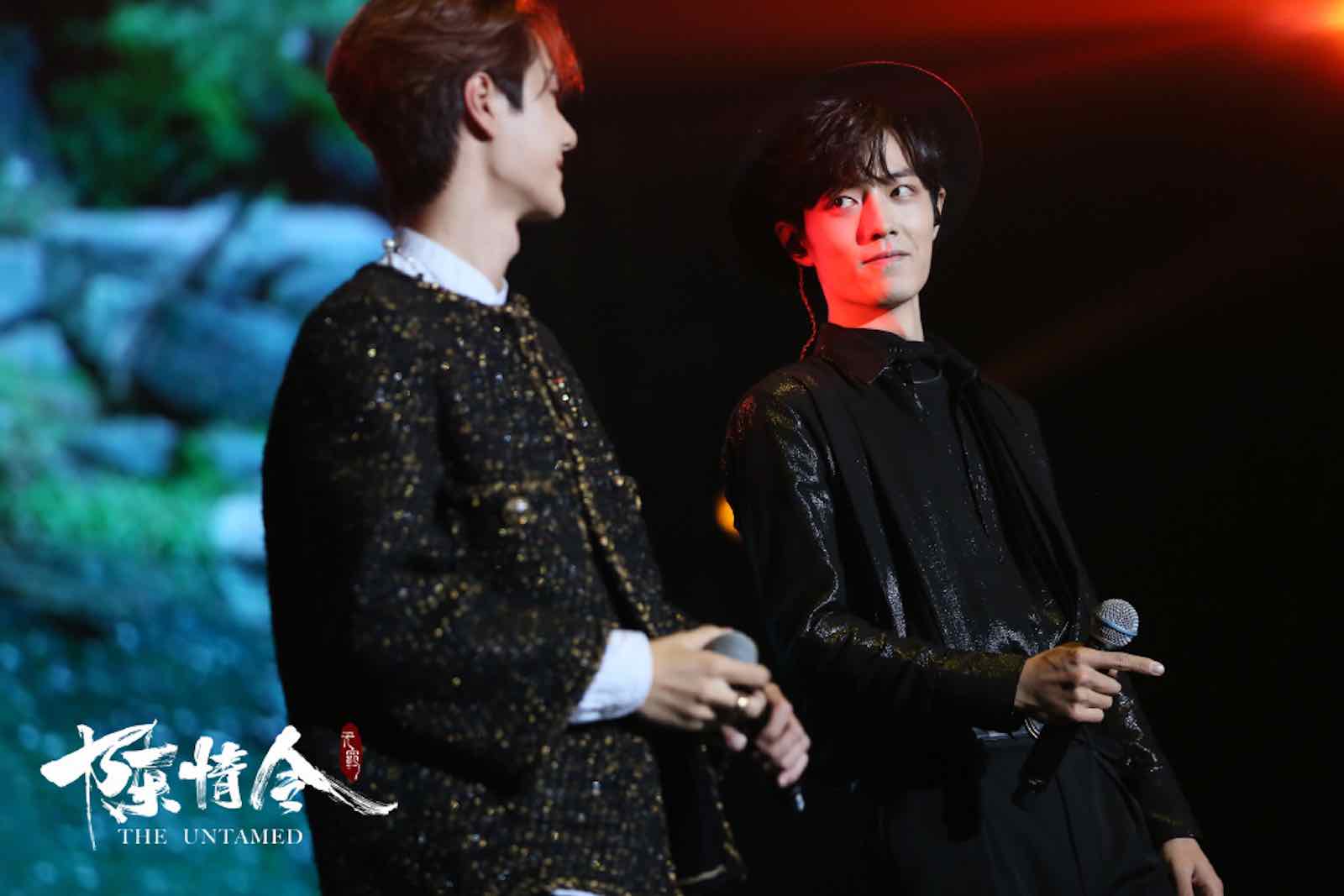 The most entertaining part of this segment is when the challenging team, Lion, step up for their attempt, they nail the action in one swift movement. Lion totally put the Day Day Up cast to shame.

The episode was subtitled and available on MangoTv’s YouTube channel, however many of the episodes featuring special Wang Yibo moments have been removed, including this one. They are available for viewing on the MangoTV app for a small subscription fee.

If you’re a massive Wang Yibo and Xiao Zhan stan, do sign up for our newsletter. We promise only to send you the most relevant news, contests, quizzes, and polls.