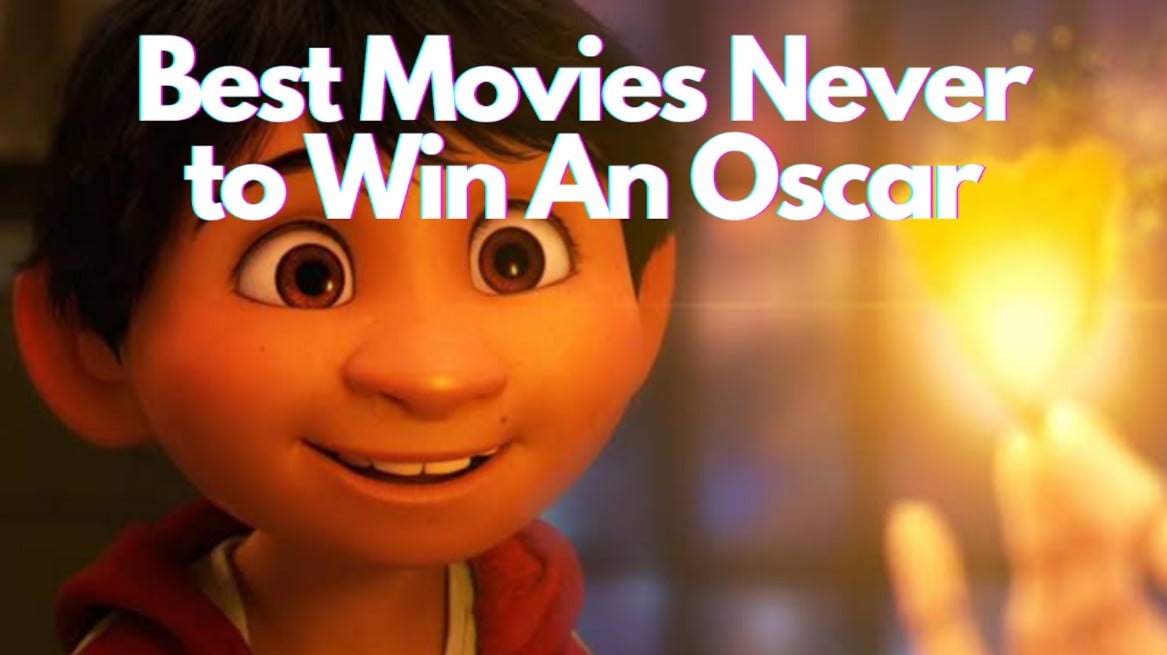 Awards are usually surrounded by public controversies. Whether it’s music, sports, or movies, handing out awards isn’t as easy as they seem. There’s a chance the panel chose a different movie or person to what the public expected, or a fan’s favorite getting omitted from the list of nominees completely. However, you want to look at it, deciding who gets what isn’t an easy decision to make. More especially the movie industry where taste guides choice, but the Academy tries to ensure it remains impartial.

After the blatant racial bias of 2016 where the Academy failed to nominate a single black person, the Oscars have been free of controversy including racial and gender bias. Awards give recognition to the amount of effort an individual or a group of individuals have put into making a project successful, but sometimes they don’t tell the entire story. A host of great movies have received Oscar nominations but failed to win, while some were completely overlooked. Here’s a list of our best movies never to win an Oscar.

Directed by Mary Harron, American Psycho is a movie based on a novel written by Bret Easton Ellis which bears the same name. The movie sees a wealthy investment banker by the name, Patrick Bateman (Christian Bale), who doubles as a gruesome, psychopathic serial killer who preys on work colleagues, prostitutes, and random members of the public. The movie was released to positive reviews and financial success in 2002 -grossing over $30 million from the box office. The movie also features other Hollywood stars like Jared Leto, Willem Dafoe, Justin Theroux, and Reese Witherspoon. Neither the movie nor the brilliant portrayal of Patrick Bateman by Christian Bale received a single Academy Award nomination.

Once Upon a Time in America is a crime drama movie written and directed by the late great, Italian filmmaker, Sergio Leone. David “Noodles” Aaronson played by Robert De Niro and Max Bercovicz played by James Woods. Noodles and Max are two best friends who lead a bunch of young ghetto Jews to prominent Jewish gangsters in New York City’s organized crime world. Based on Harry Grey’s novel, “The Hood ” and distributed by Warner Bros. studios, Once Upon a Time in America also features the great Joe Pesci, a prominent star of movies with Italian-American gangster stories like The GoodFellas, The Irishman, to mention but a few.

The movie was completely ignored by the Academy despite positive reviews and still holds a rating of 87% on Rotten Tomatoes. Since we’re talking about Robert De Niro, it’s worth mentioning another of his famous films that didn’t win an Oscar, “Casino,” from 1995. Despite its popularity and the fact that it has remained in the top ten of any list of the best gaming movies for more than 15 years, Old casino movies from the 1990s are regaining popularity in Egypt and India, just as they did in the United States when they were first released. Directed by Martin Scorsese, starring both Robert De Niro and Sharon Stone, the best award up until now is the Best Actress Award from 1996.

Before going on to blow our minds with movies like “Interstellar” and “Inception”, Christopher Nolan directed the critically acclaimed “Memento”. The movie stars Guy Pearce as Leonard Shelby, a man who cannot form new memories (anterograde amnesia), and also suffers from short-term memory loss due to an injury he sustained after he was attacked by people -who ended up killing his wife. In this neo-noir classic, Shelby uses tattoos and Polaroid photographs to track information as he hunts after his attackers.

Memento was nominated for two Oscar awards; Best Original Screenplay and Best Film Editing but didn’t get any awards. The movie ranks 25 on BBC’s 21st Century’s 100 Greatest Films and has a 93% rating on Rotten Tomatoes.

Director and screenwriter, Michael Mann brings the story of former Chicago Police officer Chuck Adamson to the big screen in this American crime drama movie. Adamson’s pursuit of a notorious criminal by the name McAuley was a big story during the 1960s. The movie stars Robert De Niro as the notorious Neil McAuley, who heads a crew of armed robbers being tracked down by Lt. Vincent Hanna (Al Pacino) after a failed heist led to the death of three security guards. The story revolves around McAuley’s determination to pull off one last heist before calling it quits, as Lieutenant Hanna tracks him and his notorious crew down.

Based on a memoir written by former stockbroker Jordan Belfort, The Wolf of Wall Street tells the true-life story of Belfort creating a brokerage house (Stratton Oakmont) along with his business partner and friend, Donnie Azoff, both of which are engaged in schemes involving the pumping and dumping of penny stocks. Directed by Martin Scorsese, the movie stars Leonardo Di Caprio as Belfort, Jonah Hill as Donnie Azoff, and Margot Robbie (Naomi Lapaglia) as Belfort’s wife. The movie was the fifth project both Martin Scorsese and Leonardo Di Caprio have worked on together after The Aviator, The Departed, Shutter Island, and Gangs of New York.

The Wolf of Wall Street was nominated in five different Academy award categories but failed to take home a single Oscar award. With Matthew McConaughey taking home the Best Actor award just ahead of Di Caprio for his role in the movie, Dallas Buyers Club.

One of the best movies ever made and a personal favorite of mine, The Shawshank Redemption was released to critical acclaim back in 1994. Directed by Frank Darabont and based on Stephen King’s Rita Hayworth and Shawshank Redemption -the movie sees Andy Dufrense (Tim Robbins) sentenced to life imprisonment in Shawshank State Penitentiary for crimes he didn’t commit.

During his time in prison, Andy befriends a contraband smuggler and fellow prisoner Ellis Redding (Morgan Freeman), whilst becoming instrumental in Warden Norton’s (Bob Gunton) money-laundering scheme. Things take a different turn when a fellow prisoner, Tommy Williams (Gil Bellows) reveals to Andy that his cellmate at another prison claimed responsibility for the crimes Andy was alleged to have committed. The Shawshank Redemption received seven Academy Award nominations but fell short of winning any of them. It also holds a 91% rating on Rotten Tomatoes.