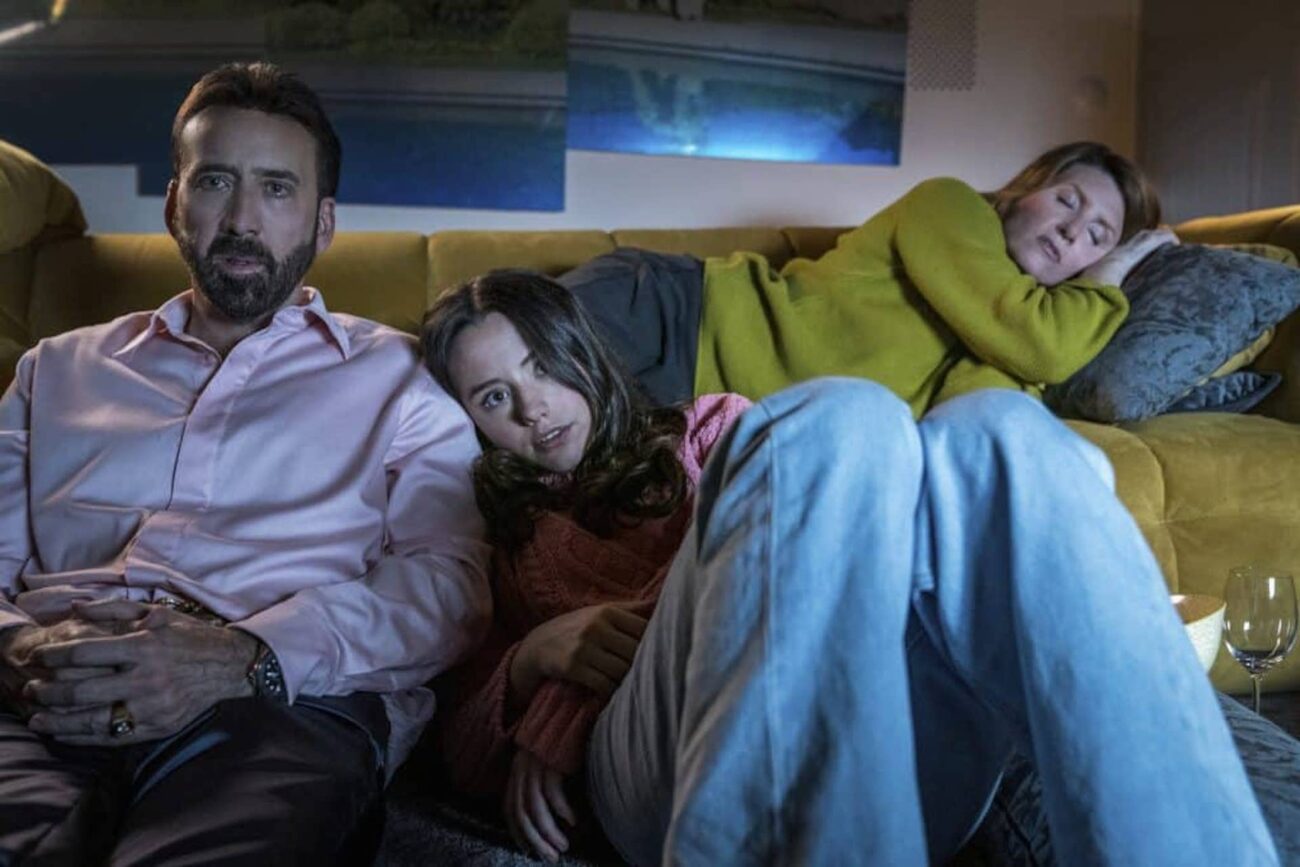 How can you watch The Unbearable Weight of Massive Talent? Since its premiere at the SXSW media conference on March 12, 2022, the release of the fourth-wall-breaking comedy movie has been keenly anticipated. 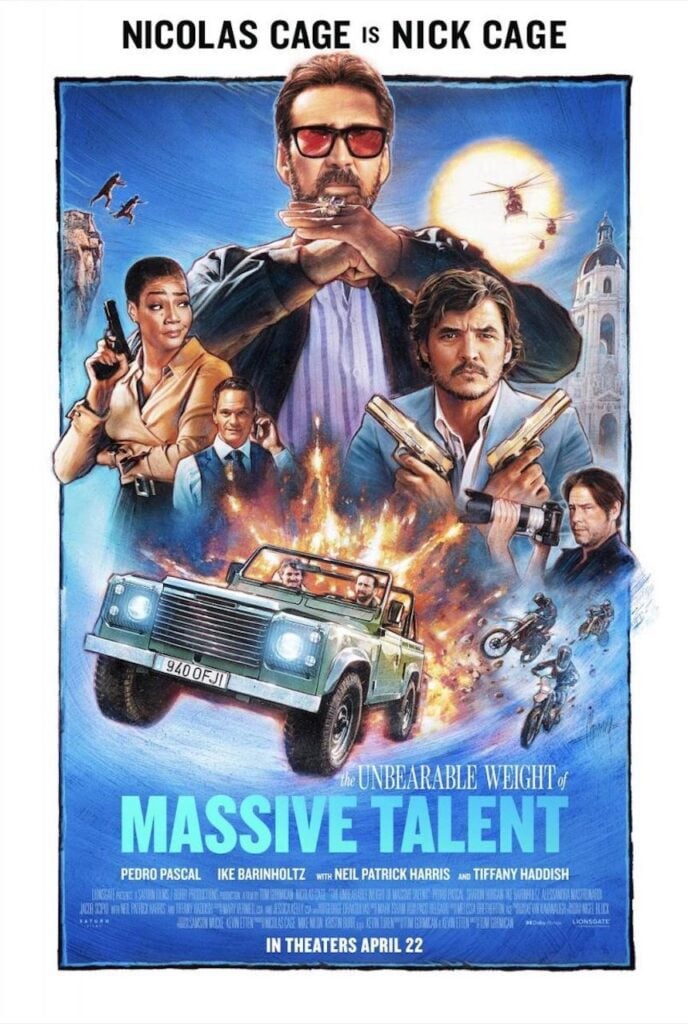 As well as being highly received by critics, the action movie, which parodies several of Nicolas Cage‘s past works along with the eccentric actor, hosts a star-studded cast. Pedro Pascal, Tiffany Haddish, Ike Barinholtz, Neil Patrick Harris, and Demi Moore are just some of the big names that appear on-screen alongside Cage. In the film, the meme legend  plays a fictionalized version of himself — Nick Cage — who begrudgingly accepts a $1 million offer to attend a wealthy man’s birthday party. However, when the CIA get in touch and inform Cage that the man (Pascal) is actually involved in a sinister drug cartel operation and kidnap plot, the ageing actor is forced to be the action hero for real this time.

In an interview with The Hollywood Reporter, Cage said the idea of him playing a fictionalized version of himself had been floating around for years. He turned down the movie “three-to-four times” until Tom Gormican, who wrote and directed the film, sent him a letter. The movie’s journey to the big screen was a long one, so let’s make things simpler by breaking down how exactly you can watch it!

WHERE CAN YOU WATCH THE UNBEARABLE WEIGHT OF MASSIVE TALENT?

Although the movie’s global release isn’t until April 22, 2022, a number of theatres across both the US and UK have been showing advanced screenings of the movie since April 15 in the US, and April 18 in the UK. For advance UK screenings, head to the Picturehouse website or for the US, check out Fandango.

Meanwhile, if you’re happy to wait until April 22, tickets are already on-sale at all major cinemas in advance, and will be available to purchase on the day subject to availability. 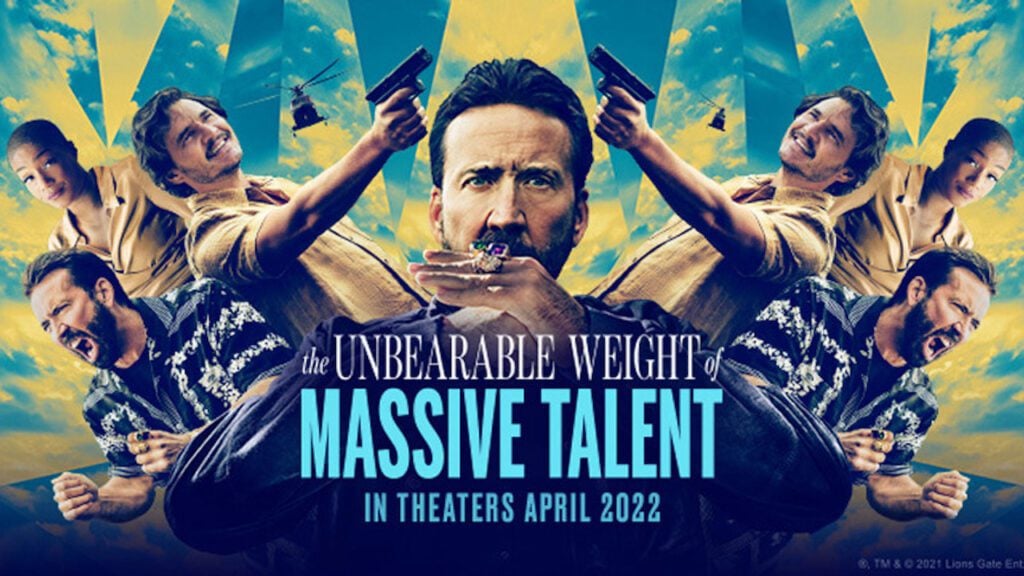 CAN YOU STREAM THE UNBEARABLE WEIGHT OF MASSIVE TALENT?

You will be able to stream The Unbearable Weight of Massive Talent once it has a video-on-demand (VOD) release. Based on other Lionsgate movies, like Moonfall, the wait between cinema and VOD is just under 3 months. This means that we can probably expect VOD release for the Nicolas Cage movie sometime in mid-late July, or early August.

When the movie is released as VOD, you’ll be able to buy or rent the movie to stream via platforms like Amazon Prime Video and Apple TV Plus.

However, if you don’t want to pay extra to stream the movie, you can feel safe in the knowledge that it will end up on a streaming service — just not right away. Because The Unbearable Weight of Massive Talent is distributed by Lionsgate, it will likely end up on Starz. This is because the studio’s new deal with the streamer came into effect from the start of 2022.

However, judging by the streamer release schedule of some of Sony’s other blockbusters like Spider-Man: No Way Home, you can probably expect to weight (get it?) between six to nine months for the film to eventually arrive on the streamer.

Meanwhile, check out staff writer Charlotte Colombo’s review to find out why The Digital Fix gave the movie a five-star rating.