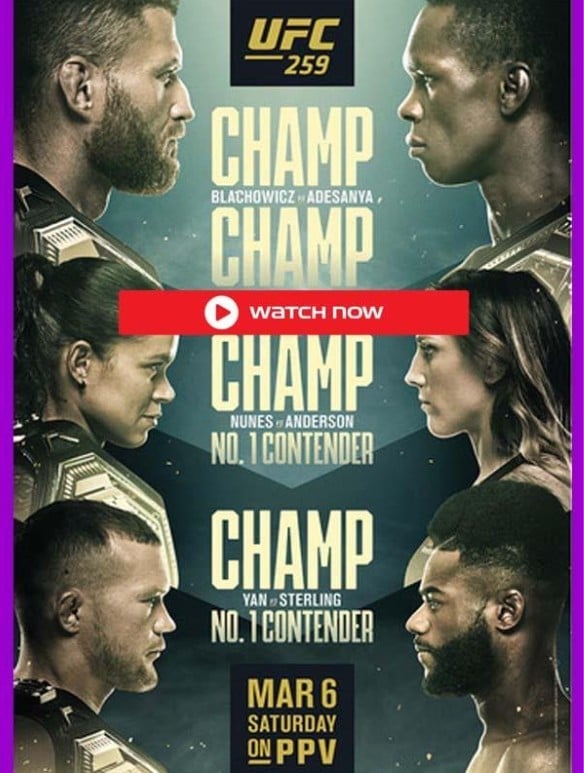 Amanda vs Nunes also defends in the UFC 259 live stream

At the 6 March Saturday 2021 almost in the midnight the UFC 259 Live Stream Main Event -Błachowicz vs. Adesanya live is going to start. Where the up first you have Amanda Nunes vs Megan Anderson for the featherweight title will occur with the main event also Petr Yav vs. Aljamain Sterling and Thiago Santos vs. Aleksandar Rakic fight is include.

In the prelims will start at 8.00 Pm ET ,fighter are ready to fight Song Yadong vs. Kyler Phillips and Dominick Cruz vs. Casey Kenney.

In the early prelims is going to start at 6:30 p.m. ET / 2:30 a.m. GST at the “Fight Island” in UFC Apex, Las Vegas, Nevada, United States. in this card Kennedy Nzechukwu vs. Carlos Ulberg,Sean Brady vs. Jake Matthews and Rogerio Bontorin vs. Kai Kara France will face off each other. 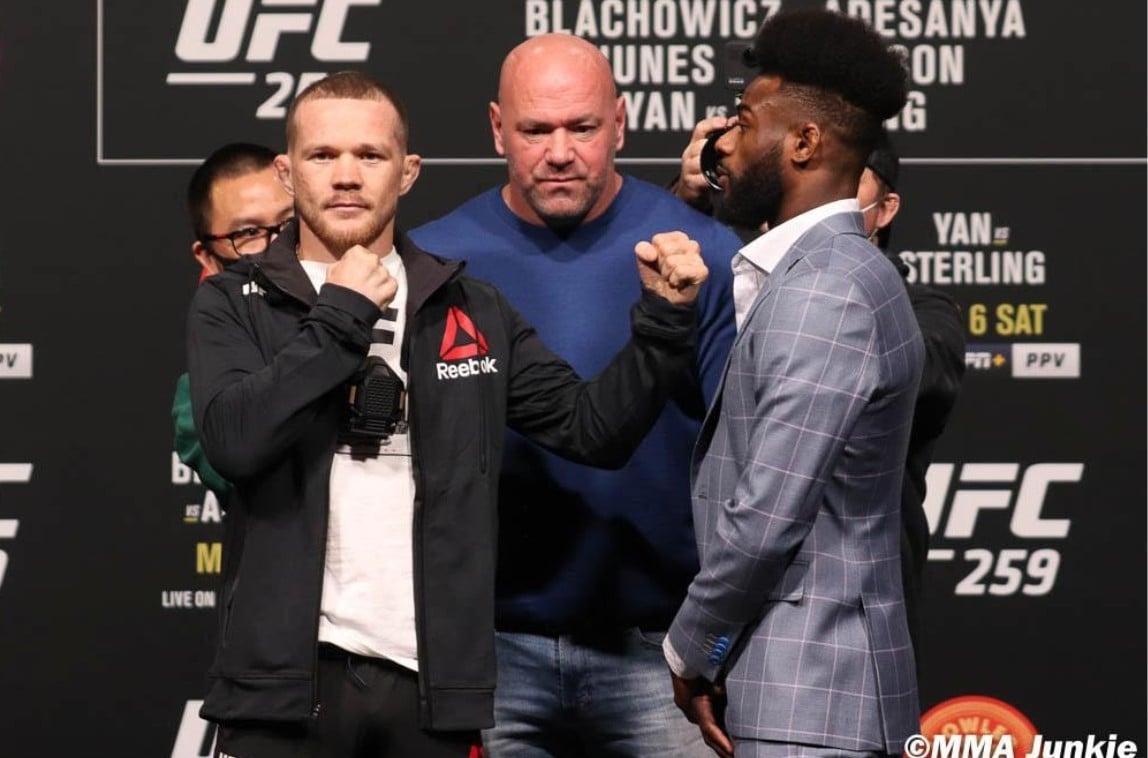 The main event is particularly exciting. The middleweight champion Israel Adesanya will challenge the light heavyweight titleholder Jan Blachowicz by moving up a weightclass to become the fifth-ever fighter to hold two UFC belts simultaneously. 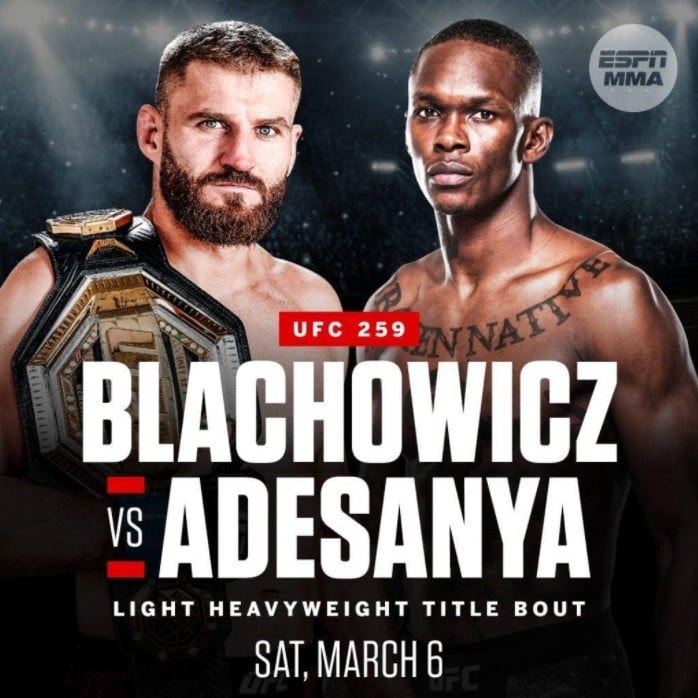 When and where will UFC 259: Blachowicz vs Adesanya take place?

UFC 259 will take place at the UFC Apex facility in Las Vegas, Nevada on March 6, 2021. The main card will be streamed live on ESPN+ pay-per-view following prelims on ESPN and early prelims on ESPN+.

How much does it cost to watch UFC 259: Blachowicz vs Adesanya?

UFC fans with ESPN+ subscription can catch the event live in the United States on their television and streaming devices. A subscription to ESPN+ costs $6 for a month and $60 for an entire year. 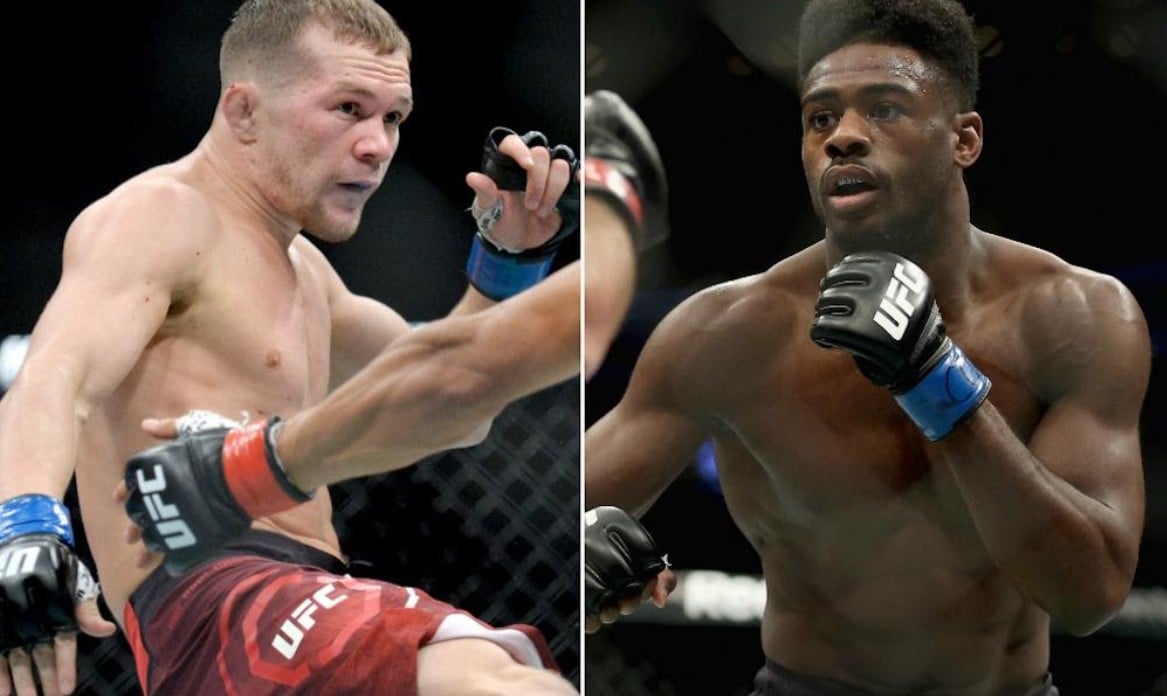 The ESPN+ yearly subscription along with UFC 259 pay-per-view can be purchased at $89.98, therefore saving nearly 30% on the cost. A regular one-year subscription of ESPN+ is priced at $59.99.

In the United Kingdom, UFC 259 will be available on BT Sport 2 instead of the usual BT Sport Box Office. Those with BT Broadband subscriptions can access BT TV and BT Sport by adding £15.00 per month to their existing packages. BT provides a ‘Big Sport’ package at £40 per month, which includes all BT Sport channels, including BT Sport 2.

Non-BT customers can also access the event by signing up for the BT Sport Monthly Pass for £25. The event can also be streamed live on BT Sport website and app.

In India, UFC 259 can be accessed by cable TV on Sony Ten 2 (English) and Sony Ten 3 (Hindi). It can be streamed live as well with a Sony LIV app premium subscription.

The Blachowicz vs. Adesanya fight at UFC 259 is one of the most anticipated matches of the year. Adesanya (a.k.a. “The Last Stylebender”) puts his 20-0-0 undefeated record up against one of the toughest competitors in the league. The Polish champ Blachowicz won’t bend easily, and outsizes Adesanya by 20 pounds, which may or may not be to his advantage.

Adesanya is currently the UFC Middleweight Champion. If he takes home the Light Heavyweight belt at Saturday’s main event, he’ll be the fourth fighter in UFC history to hold two different titles simultaneously. The first person to do that: Conor McGregor. The most recent person to do that: Amanda Nunes, who fights in the UFC 259 co-main event. 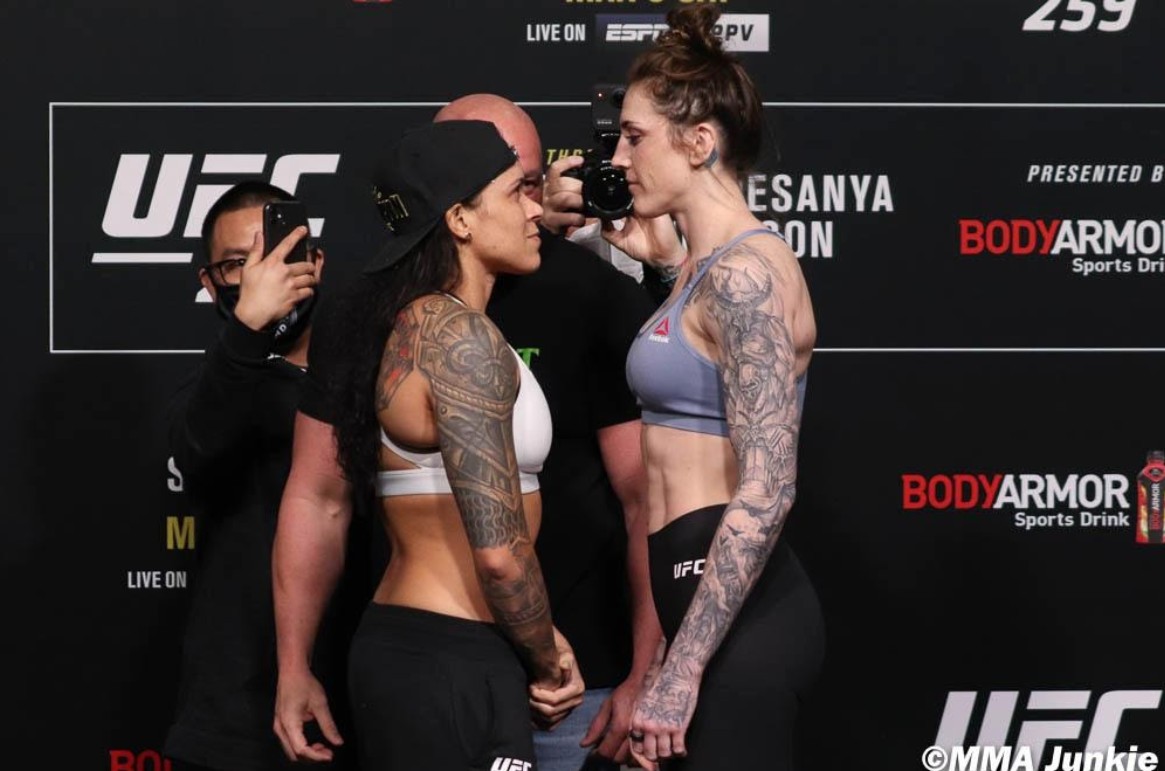 The UFC 259 fight card also includes one other title fight, with Petr Yan vs. Aljamain Sterling squaring off for the UFC Bantamweight Championship. While oddsmakers have Adesanya and Nunes as heavy favorites in their respective bouts, betting odds for the Yan vs. Sterling fight are more evenly matched.