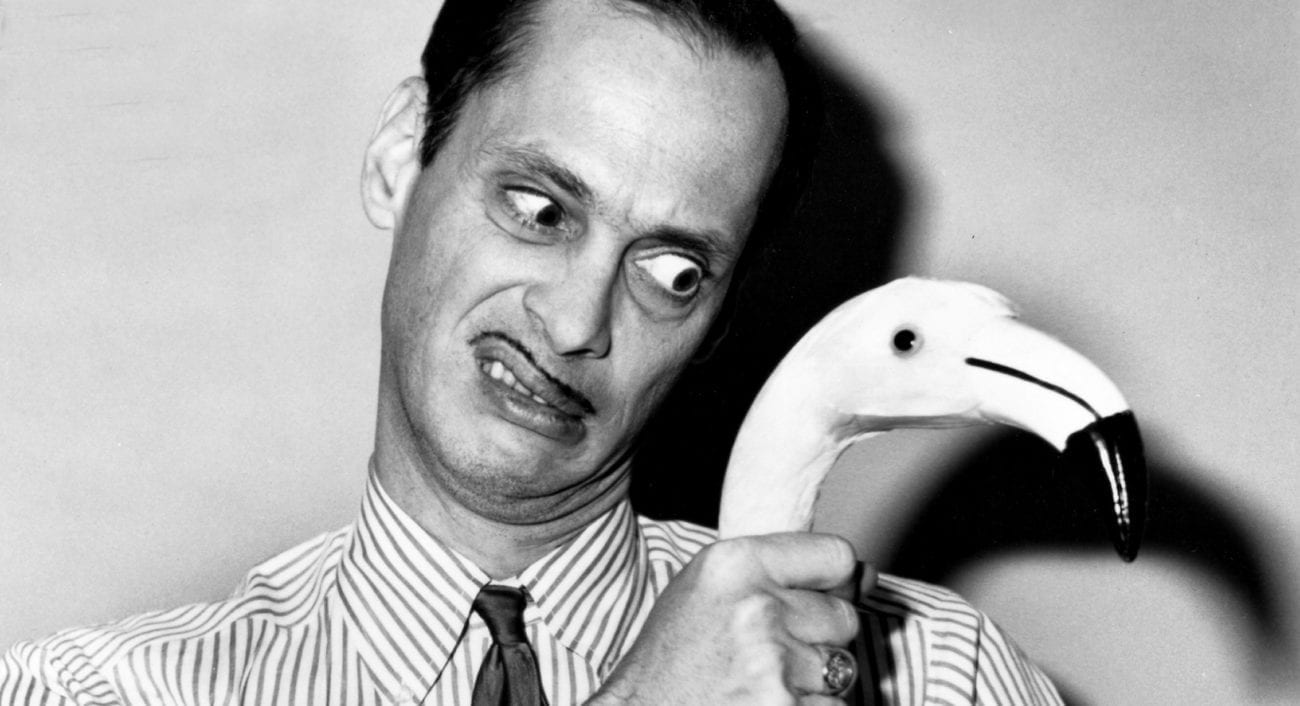 Released on February 26th, 1988 after a small premiere in Baltimore a week earlier, John Waters’s Hairspray jived into the cultural consciousness. In the 30+ years since the movie’s release, it has gone on to inspire a hit Broadway musical and a feature remake.

Most notably, the movie also propelled Waters from being a superbly notorious auteur of sleaze and depravity to a cherished counter-cultural icon – one who eventually became accepted by Hollywood and the mainstream culture. In light of this, here are ten key moments from Waters’s career that illustrate his phenomenal progression as a filmmaker, LGBTQI icon, and self-proclaimed “Pope of Trash”.

Waters & Divine (Harris Glenn Milstead) – the figureheads of filth – made audiences around the world howl, dry heave, and ask “is she eating an actual dog turd?” Pink Flamingos remains one of the most shocking movies ever made (but also one of the most enjoyable).

In her quest to become the filthiest person alive, Divine eats actual faeces and blows a man on camera. Meanwhile Waters zooms in lovingly on the action and celebrates the horrified expressions of Baltimore’s locals as his drag-queen muse struts sassily through the streets.

Toning down the filth but expanding his subversive vision, Waters’s playful vision comes through strong in this beloved, irreverent comedy. Divine plays a reckless runaway schoolgirl who downright hates cha-cha heels and who inexplicably becomes the toast of the art scene – a moment she celebrates by massacring an entire audience at an art performance.

Featuring the greatest neurotic performance in the history of cinema courtesy of Waters’s regular Mink Stole, Desperate Living took the filmmakers oeuvre into the hilarious realm of melodrama. The movie features many unexpected twists and turns, all of them as equally ludicrous as the last.

Nine years later, Waters surprised everyone by not only releasing a musical, but also releasing one with a distinct shift in temperament. With Divine and a young Ricki Lake playing a Baltimore-based mother & daughter taking on 60s segregation, the movie maintained Waters’s sensibilities while pushing the filmmaker a little closer to the mainstream.

Uniting a formidable array of Hollywood outcasts and misfits including Traci Lords (Blade), Iggy Pop, and Kim McGuire (Disturbed), Cry Baby also saw Waters enlisting the talents of teen heartthrob of the time – Johnny Depp (Sweeney Todd). An ode to 50s juvenile delinquency melodramas, the movie remains one of his most enjoyable cuts to date.

Proving Waters had officially arrived in Hollywood to some capacity, the filmmaker’s biggest comedy movie of his career starred Kathleen Turner (Romancing the Stone), Matthew Lillard (The Descendants), and Sam Waterston (The Killing Fields), telling the story of a mother who will do anything for her family . . . even kill. That’s especially true if you have the audacity to wear white after labor day. But then, that’s suburbia for ya!

If Serial Mom was proof Waters was now a part of Hollywood then his guest appearance on The Simpsons confirmed he was an indelible part of pop culture. Voicing an openly gay character called John with a love for “tragically wonderful” and “ludicrously tragic” kitsch memorabilia, the episode remains one of the finest in the history of the show. One that also celebrates gay culture within a mainstream focus.

Starring Edward Furlong (American History X) and Christina Ricci (Buffalo ’66), Pecker saw Waters rejecting mainstream cinematic concerns to return to some downright filthy depravity. Following a young photographer who unwillingly becomes part of the pretentious New York art world, Pecker could be read as a visceral statement that the director was ready to abandon Hollywood for the Baltimore-perversions of his formative years.

Waters brought a whole career’s worth of dark observations and wicked anecdotes to this Jeff Garlin-produced stand-up special, highlighting his strange and compelling trajectory from “Pope of Trash” to family fave.

With a jaw-dropping cast including John Travolta (Pulp Fiction), Zac Efron (The Disaster Artist), Christopher Walken (Seven Psychopaths) & Michelle Pfeiffer (Dangerous Minds), Adam Shankman’s remake of Waters’s classic musical was about as mainstream – and as family friendly – as they get. Not that Waters was going to allow them to do the film without adding his own personal, filthy touch – he briefly shows up as a flasher.