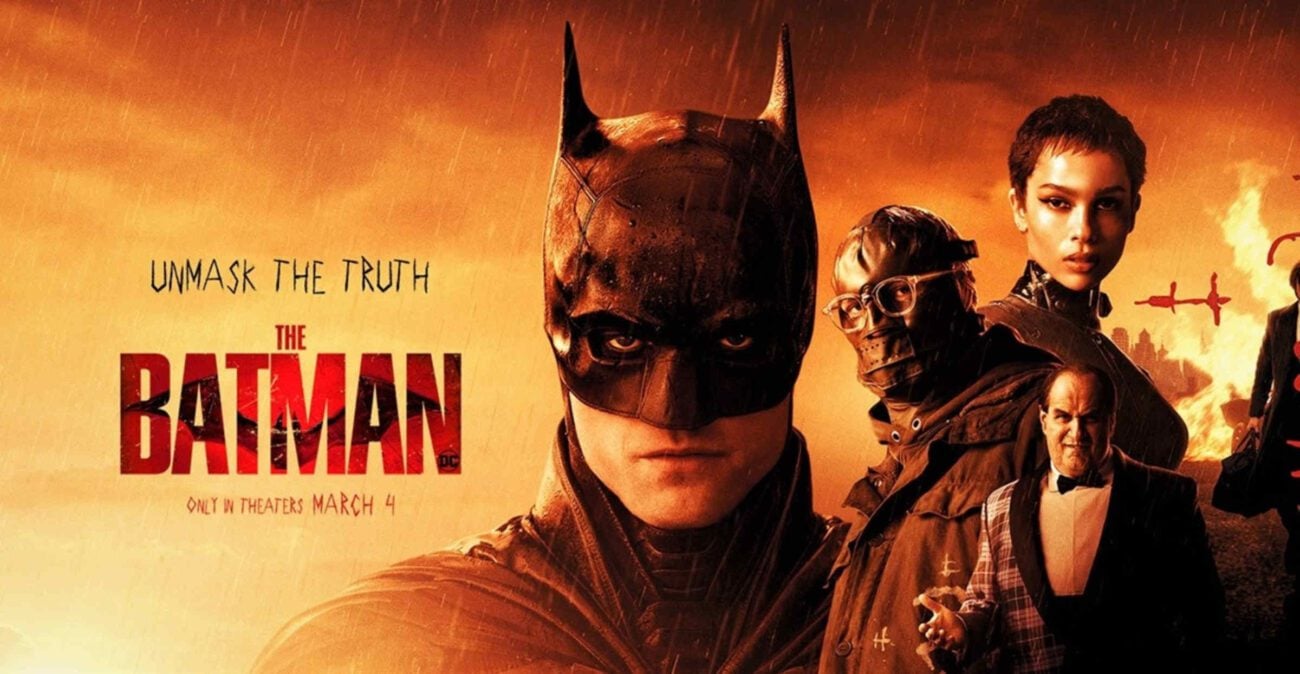 It has been a long wait but it’s almost time to watch ‘The Batman’, the latest incarnation of the Caped Crusader. This version, starring Robert Pattinson as Bruce Wayne and Zoë Kravitz as Selyna Kyle, will set up a new “bat universe”, with an already confirmed spin-off, conceived by director Matt Reeves, known for his work in Planet of the Apes reboot trilogy.

This time the audience will meet Bruce Wayne in year two of his mission as Gotham’s vigilante. For what the actor has said, the movie is set over the course of only one week as Batman is trying to stop The Riddler’s (Paul Dano) before he keeps killing people.

He will have help from Selyna, aka Catwoman and Detective James Gordon (Jeffrey Wright)  But that’s not it, as The Penguin, portrayed by Colin Farrell, will also have something to do with the city’s crime. From all the teasers, we can know that this movie is trying to offer a new take on the character. Will it succeed?

In the United States, the release date of The Batman is March 4, 2022. The movie will not be being released immediately on a companion streaming service, which is an oddity in the Post-COVID world. Warner Bro. has confirmed that you can stream the movie 45 days after the date when it will be released in theaters.

Where to Watch The Batman online at home?

Unfortunately, unlike most movies being released these days, The Batman will not be streaming online on any streaming platform. The film was delayed due to the pandemic so that it could be released in theaters, and Warner Bros. is banking on the fact this could (and it should) be a massive box office hit for them. They lost quite a lot of money last year with the dual-release of their films and looking to get back on track in 2022.

I will say, the 45-day theatrical window could be in play if, for some reason, the film underperforms. If that’s the case or a streaming release is announced shortly after the movie premieres in theaters, we’ll update you! When the movie does, however, get a streaming release, its streaming home will likely be HBO Max.

Yes — with a but. The Batman will be available for streaming on HBO Max, but not until 45 days after its theatrical release date.

Let’s discuss Warner Bros.’ controversial “day-and-date” release plan. Last year, theater companies struck a deal with Warner Bros. to show the studio’s 2022 slate on the big screen during a 45-day window. If The Batman had kept its original 2021 release date, it might have gone straight to HBO Max. But that’s not the case.

No. The Batman is not streaming on Netflix, and likely will not be on Netflix anytime soon. However, you can watch The Old Guard on Netflix, if you’re craving a superhero-esque action movie right now.

There is some bad news. The Batman is not on Amazon Prime Video. Like other Warner Bros. movies this year, it’s heading to HBO Max as well as theaters. The movie is available on HBO Max with your subscription for 30 days starting Thursday, Aug. 5.

While the movie isn’t yet available on Amazon Prime Video, will it come to the streaming platform? That’s another negative. As a Warner Bros. movie, it’s going to head to HBO Now after its theatrical run. This is usually about six months after the theatrical release.

What about on Amazon Video? Eventually, the movie will head to Digital, which will mean it comes to Amazon Video. However, that’s not going to be for some time. We’re looking at three months for the DVD release date, which is around when the Digital release will also be.

It’s going to be worth the wait.

‘The Batman’ isn’t a part of the titles accessible through a basic subscription to the service, but users who have subscribed to Hulu with HBO Max can stream the movie here! Alternatively, you can check out ‘Gundala,’ a movie about a man who turns into a vigilante and steps up to fight injustice.

How to Stream The Batman For Free?

Since ‘The Batman’ can only be watched at a theatre or online with a subscription to the above-mentioned platforms, there is currently no way to watch the movie for free. We also discourage our readers from resorting to any illegal methods and strongly advise them to consume all entertainment legally and by paying for it.

Here’s your warning to the bathroom before settling in for this one.

The Batman’s runtime is 2 hours and 27 minutes. That makes it the third longest superhero movie ever, behind Avengers: Endgame and Zack Snyder’s Justice League.